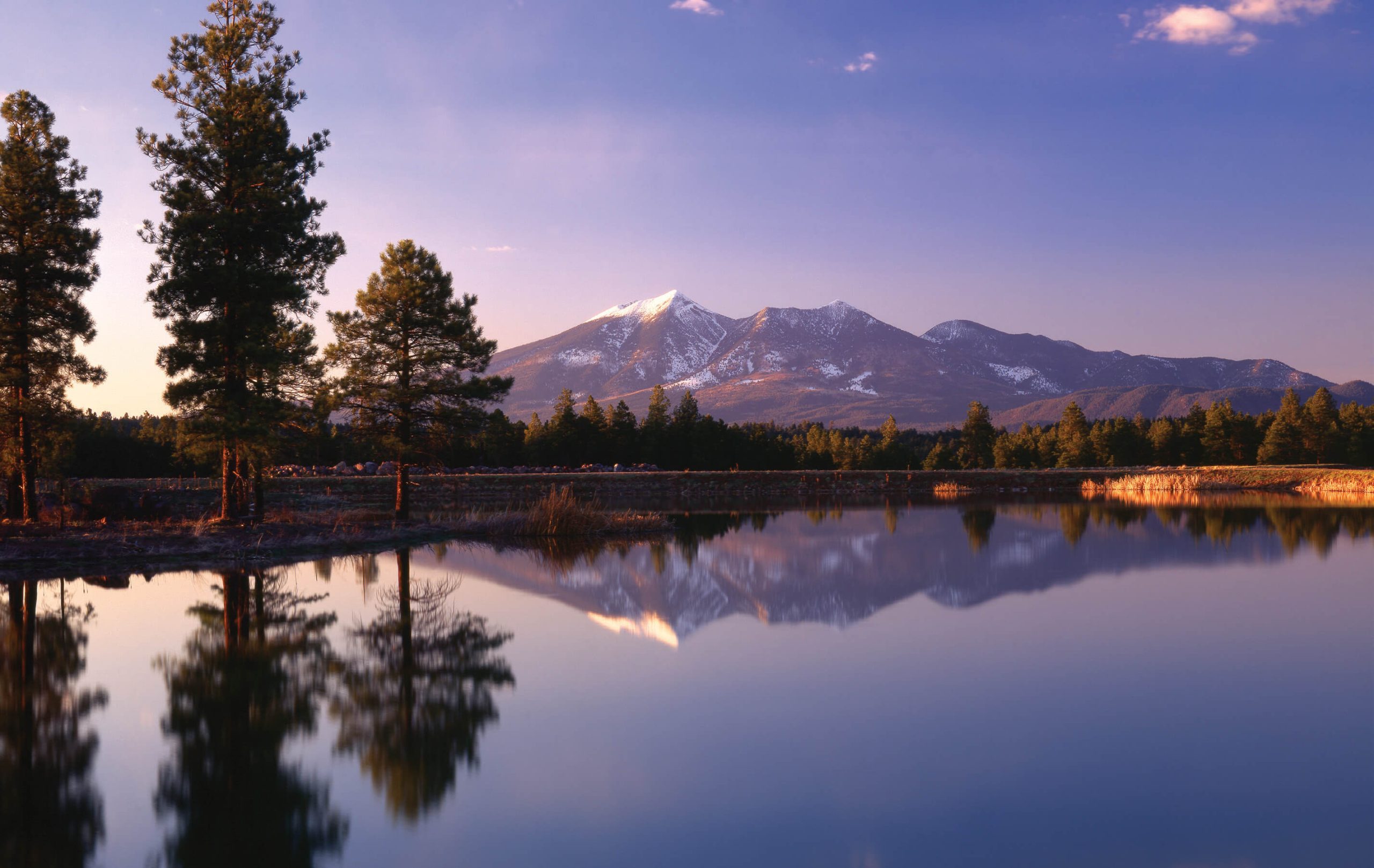 The first train whistled into Flagstaff, Arizona, on August 1, 1882. Its riders were a rogue mix of scientists, explorers, and tourists, all of them anxious to see for themselves the magnificent landscapes they had only heard about: the Grand Canyon, the Painted Desert, the Petrified Forest, and the Navajo and Hopi reservations. A few decades later, road improvements brought the automobile to the general population, and in 1921, Flagstaff became a stop along Route 66, a 2,000-mile highway connecting Chicago, Illinois, and Santa Monica, California. The great American driving vacation had a new favorite destination. 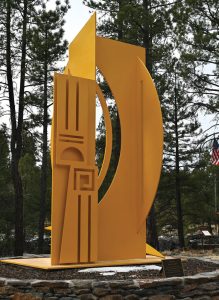 Tourism, however, is only one part of Flagstaff’s rich and varied story. Today a lively college town with miles of recreational trails and public land at its doorstep, Flagstaff ranks right up there with Bozeman, Montana, and Boulder, Colorado. As a gateway community to a national park, it also bears some resemblance to Moab, Utah, and Jackson Hole, Wyoming. The comparison ends there, however, as Flagstaff is a creation of its own heritage, location, and rough-and- tumble background. 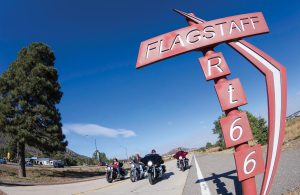 Beginning as a thriving town with railroad, lumber, and ranching industries surrounded by the world’s largest  ponderosa pine forest, the city’s culture, tourism, and commerce have been influenced by its proximity to the tribal homelands of the Navajo, Hopi, and other Native peoples. Its relevance within the international scientific community is widely celebrated, too. In 1930, astronomers at Lowell Observatory discovered Pluto, and in the early 1960s, Apollo astronauts chose Flagstaff and its array of nearby geologic landmarks as the training ground for a lunar landing. 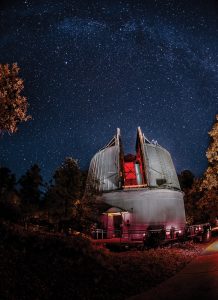 Creatives, too, have found inspiration in the region’s endless horizons and contrasting landforms. Early artists, captivated by the moody patterns of shifting light and shadow, flocked to the nearby Grand Canyon and other natural landmarks. Native Americans incorporated stories of daily life and mythology in their art, a tradition that continues from generation to generation. Contemporary artists, like internationally renowned light and space artist James Turrell, have used the landscape to merge science and art in meaningful ways. At Roden Crater, a volcanic cinder cone located on the edge of the Painted Desert just east of Flagstaff, Turrell is creating a celestial observatory, a daring vision that fits perfectly with Flagstaff’s history as a cultural crossroads for tourism, art, architecture, and scientific exploration.

With its stunning scenery and widely ranging options for outdoor recreation, Flagstaff is a year-round playground. Photo: Tom Alexander

A good place to get your bearings is at the Museum of Northern Arizona, located 3 miles north of downtown on a sprawling 200-acre research campus that spans both sides of Highway 180 leading to the Grand Canyon. The museum’s focus on the natural and human history of the Colorado Plateau is reflected in its many permanent and rotating exhibits, including Native Peoples of the Colorado Plateau, a permanent exhibition that reflects the histories, values, and cultures of 10 tribes from the Colorado Plateau. More than 350 objects are on display, ranging from weavings, pottery, and silverwork to toys, tools, and even a skateboard. 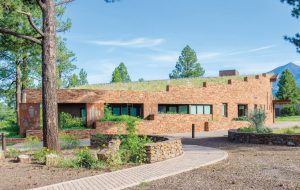 The Easton Collection Center houses thousands of treasured objects that comprise the anthropological, biological, and fine art collections of the Museum of Northern Arizona. Located at the base of the San Francisco Peaks, on homelands sacred to Native Americans throughout the region, the building was designed and constructed in consultation with a Native American Advisory Committee. Photo courtesy of the Museum of Northern Arizona

Not to be missed is the museum’s fine art collection, which includes historical and contemporary work by Native American and Anglo artists. The world’s largest collection of paintings and archival material related to Gunnar Widforss, the Swedish-American watercolor artist who became known as “the Painter of the National Parks” in the 1920s, is also housed at the museum.

If you want to know why Flagstaff was designated the world’s first International Dark Sky City, just take a trip up Mars Hill, located a few blocks west of downtown, after sunset. At the top of the hill, Lowell Observatory, established in 1894, is one of the oldest in the nation. While Roden Crater offers celestial viewing with the naked eye, here visitors can view the stars on a nightly basis. The Giovale Open Deck Observatory features six advanced telescopes that collectively offer an unparalleled stargazing experience for the entire family. 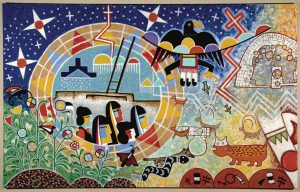 A day spent exploring Flagstaff’s vibrant downtown neighborhoods on both sides of the tracks will give you a sense of just how significant the railroad and Route 66 were to the city’s development. To the north of the tracks, historic downtown is anchored by a county courthouse, two historic hotels, a slew of art galleries, hip restaurants and breweries, and shops selling recreational equipment and regional souvenirs. The area south of the tracks was once home to dive bars, low-income housing, sawmills, lumber yards, and mom and pop corner stores, but it now rivals downtown for its boutique bars, restaurants, and craft breweries that cater to students at Northern Arizona University and a burgeoning population, ranging from scientists and engineers to river runners and rock climbers.

The museum’s jewelry collection offering more than 1,450 pieces of Navajo jewelry dating from the 1880s, including jewelry making tools and molds for sand casting. Photo courtesy of the Museum of Northern Arizona

There is no shortage of cafes from which to start your tour. Late for the Train and Macy’s European Coffeehouse and Bakery, downtown staples for over 30 years, cater to locals and visitors alike. South of the tracks, the Tourist Home, originally a boarding house for Basque sheepherders, serves breakfast and lunch all day. During the warmer months, check out the patio, built on the site of a Basque handball court.

After breakfast, head to the Tudor-style train station, which doubles as the city’s official Visitor Center. A model railroad vignette of 1920s Flagstaff offers a good perspective on how vital Flagstaff’s location as a stop on the Santa Fe Railroad was to its development in the mid-20th century. A walking guide, available at the Visitor Center, suggests an itinerary for exploring downtown Flagstaff, an area that’s well preserved and full of charm. 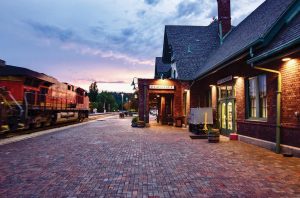 Around the corner, Heritage Square offers music, movies, children’s activities, live performances, art festivals, and other special events throughout the year. In a nod to Flagstaff’s cross-cultural heritage, each bench in the square reflects a significant event in the city’s history, including scenes depicting the railroad, Lowell Observatory, the ranching and lumber industries, and Native American culture. 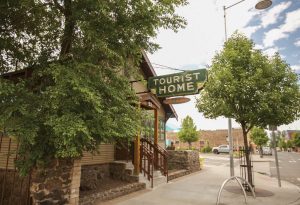 Another map, also available at the Visitor Center, offers a self-guided tour of the city’s numerous public art installations and murals. Start in Heritage Square, where The Veridic Gardens of Effie Leroux, a 20-by-45-foot canvas, wraps around the spiral car-park ramp just outside of Diablo Burger. A block to the west, look for birds flying out of a piano in The Sound of Flight, said to be the largest mural in Arizona, located on the east wall of the Orpheum Theater. The Mother Myth mural on the backside of Lumberyard Brewing Company tells the story of Route 66 in astonishing detail. Driving east on Route 66, look for the half-block-long mural embellishing the side of Absolute Bikes that depicts a bicyclist with Band-Aids on his knee cruising by a car stuck in traffic.

If you need to stretch your legs after the art and science tour, rent a bike and hop on Flagstaff’s Urban Trails System (FUTS), a 56-mile city-wide network of trails, or head out to Arizona Snowbowl for winter and summer recreation. During the warmer months, hikers summit Arizona’s highest point, Humphrey’s Peak, where, on a clear day, the Grand Canyon’s North Rim is visible more than 80 miles away. 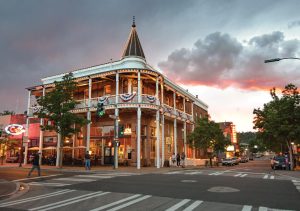 For more than 100 years, the Weatherford Hotel has been an iconic cornerstone of Flagstaff’s historic downtown. Photos courtesy of Discover Flagstaff

Further afield, a trip east or west on Route 66 (now Interstate 40) offers an interesting perspective of the area’s natural and cultural history. Dropping out of the pines on Flagstaff’s east side, a volcanic field of some 600 cinder cones — part of the San Francisco Volcanic Field — comes into view for as far as the eye can see. Forty miles further east, find Meteor Crater, which was formed by a 150-foot-wide meteorite that hit the earth at a force 150 times greater than an atomic bomb. The result is a giant cavity in the earth’s surface that’s 550 feet deep and approximately 1 mile wide.

Venture a bit further east to La Posada in downtown Winslow for lunch. Built in 1930, the hacienda-style hotel is the last of those designed by the Fred Harvey Company’s chief architect, Mary Elizabeth Jane Colter. During her 38 years with the company, she designed 21 landmark hotels, lodges, and public spaces, including Hopi House, Hermit’s Rest, Lookout Studio, and Desert View Watchtower, iconic buildings at the South Rim of the Grand Canyon — a trip best saved for another day.