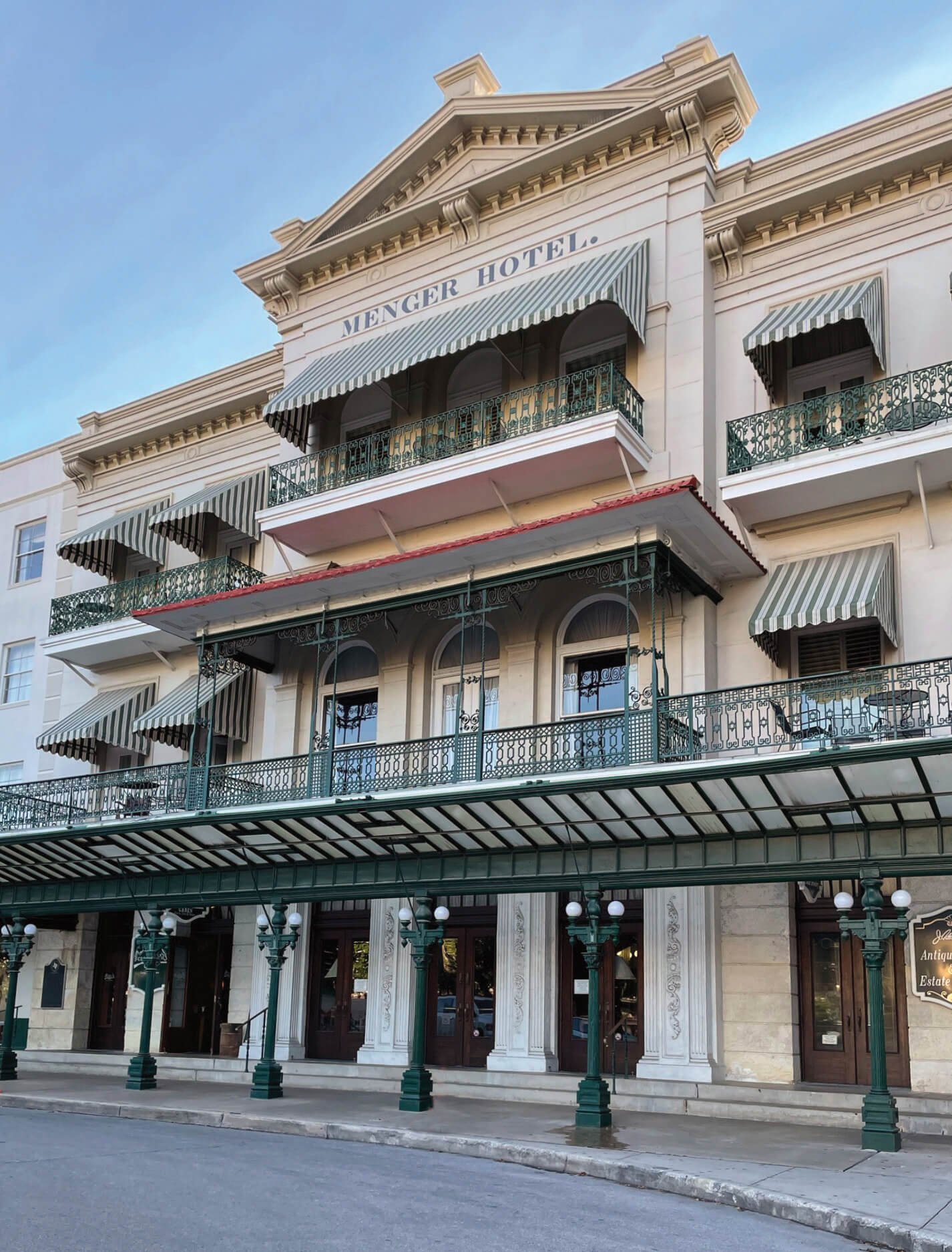 The original portion of the Menger Hotel sits on the southwest corner of the present-day, much larger hotel. Photo: Elaine Warner 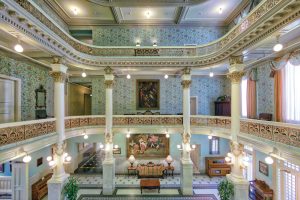 The 1859 Victorian lobby was updated in 1909 from a rustic, utilitarian space into an elegant, neoclassical area.

Eleven years after the Battle of the Alamo in 1836, 20-year-old German immigrant William Menger arrived in the little community of San Antonio. In 1851, he married boarding house owner Mary Guenther. Menger, a skilled cooper with beer-brewing know-how, built Texas’ first commercial brewery on a parcel near the Alamo. 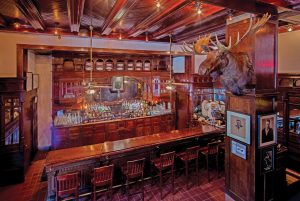 The Menger Bar, with its outstanding woodwork, was inspired by the pub in London’s House of Lords.

In addition to his bulk business, Menger opened a small tavern. He and Mary subsequently built an inn next door to accommodate customers who needed a bed after imbibing his potent brews. Thus, the seeds of the majestic Menger Hotel were sown.

By 1859, a two-story stone structure with classic elements replaced the boarding house. The Menger Hotel was so popular that within the year, it expanded from 50 to 90 rooms. The property featured a cellar with 3-foot-thick limestone walls that were ideal for chilling beer, and a tunnel led from there to the brewery. By the time of Menger’s death in 1871, the hotel was known nationally, and Mary continued to manage the property until 1881. 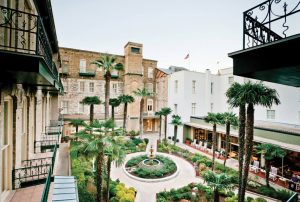 Subsequent owners expanded, renovated, expanded, and renovated again to bring the hotel to its present 316 rooms. A classic pediment is still a defining feature of the façade, and the iron railings on the second-floor balcony date back to 1869. Inside, there are more reminders of the hotel’s history.

In the original portion of the hotel sits the square grand piano purchased by Mary in 1876. The main part of the lobby, once simply functional, was remodeled in 1909 into an elegant, neoclassical space with graceful columns and a stunning, stained glass skylight. Some of the furniture was purchased by the Mengers on European trips, and one of the paintings, Venting Cattle on the Frisco System by artist Frank Lewis Van Ness, was borrowed for a scene in the Warner Brothers epic film “Giant.” The Menger décor is an interesting blend of Texan and imported antiques. 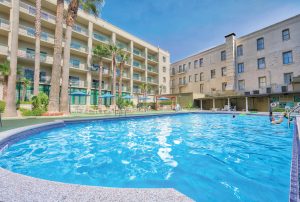 The more contemporary areas of the Menger Hotel complex include a large pool and fitness center.

The Menger Bar is a hotel highlight. In 1887, then-owner Hermann Kampmann envisioned an atmosphere inspired by the pub in the House of Lords in London. Richly paneled in cherrywood with beveled mirrors imported from France, it’s noted as a venue where Theodore Roosevelt recruited Rough Riders. 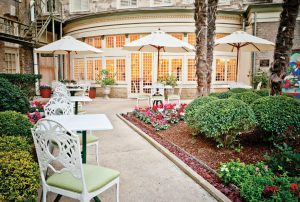 The bay window in the Colonial Dining Room offers a beautiful view of the Tropical Garden. Photos courtesy of Menger Hotel

A place steeped in such history has welcomed quite a few notable guests. More than a dozen U.S. presidents have visited the Menger — from Ulysses S. Grant to Bill Clinton, who was so enamored with the hotel’s famous mango ice cream that he had 40 gallons of it shipped to Washington, D.C., for his 1993 inaugural celebration. And according to hotel legends, when Roy Rogers visited, he brought Trigger, who was stabled in a large closet in his suite. 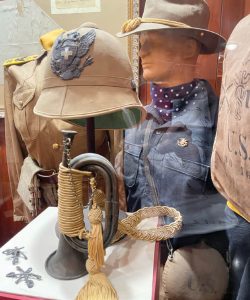 Today’s Menger Hotel beautifully blends its past with modern amenities, and at 163 years old, the hostelry still honors its origins. William and Mary would be proud.

Based in Edmond, Oklahoma, Elaine Warner is a member of the Society of American Travel Writers and is the author of two books, including More than Petticoats: Remarkable Missouri Women.