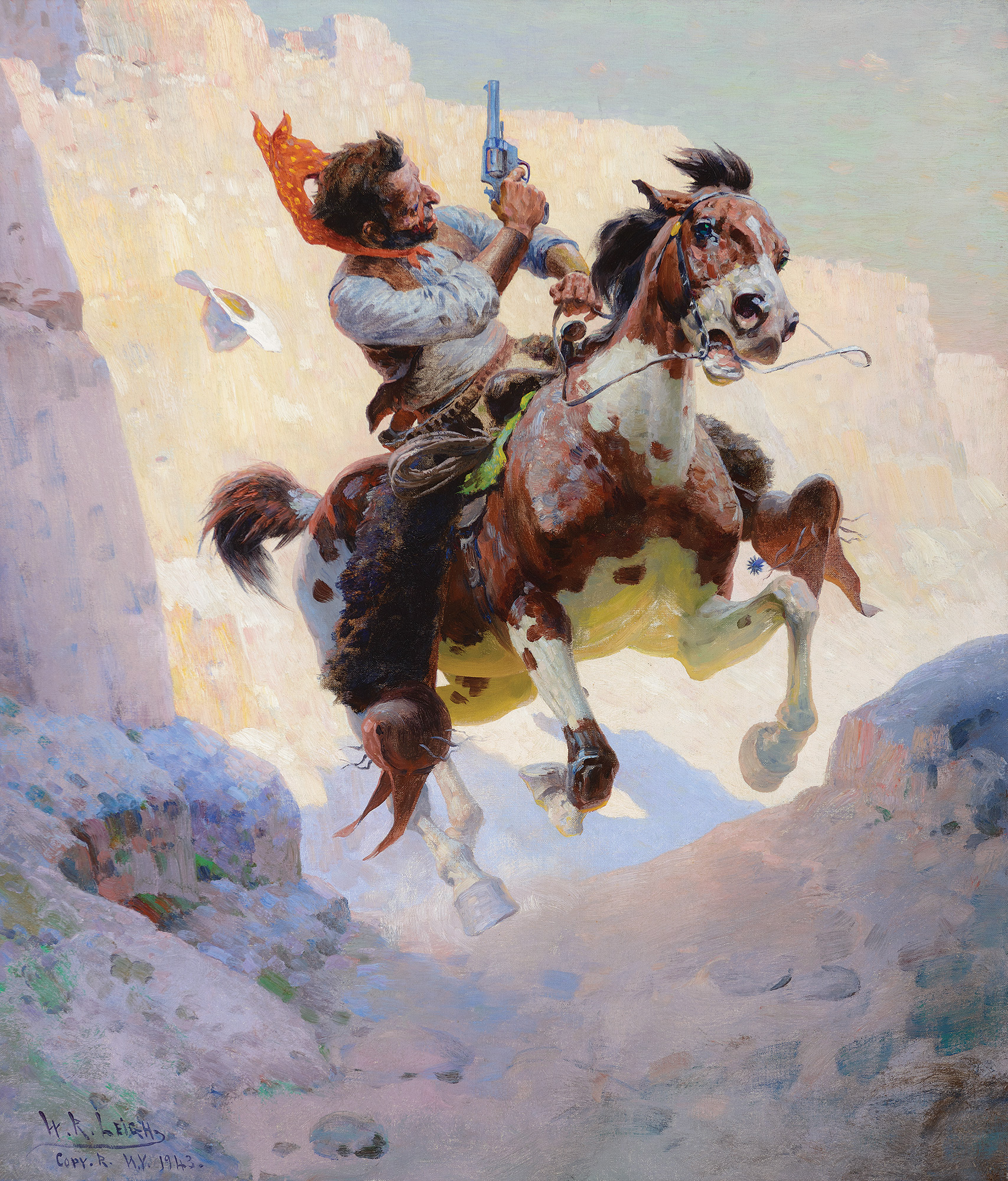 15 Sep Auction Block: Of the Classics

The cowboy, that known legendary and lone figure who rides the winding river canyons and rocky peaks of the Western U.S., and the region’s near-mystic mountain landscapes gained favor among collectors at leading late summer sales.

W.R. Leigh’s dynamic A Close Call, featuring a mounted cowboy — hat flying, gun drawn — galloping for his life, realized nearly $1.2 million at the Coeur d’Alene Art Auction in July and is a sign of continuing interest in the life and lore tied to the American cowboy. In addition, Andy Warhol’s John Wayne, from his Cowboys and Indians series, depicts  the actor whose big screen portrayals of the cowboy set the standard for generations and sold for $81,600 at Altermann Galleries’ Santa Fe Auction in August.

Dramatic portrayals of Western landscapes by painters who exist in a class of their own also reached new heights, including Thomas Moran’s The Rio Virgin, Southern Utah, which went for $651,000 at the Coeur d’Alene Art Auction; a two-sided painting tied to the Sierra Nevadas by Edgar Payne, which brought $137,500 at Bonhams’ sale of California and Western art; and Ed Mell’s angular Southwestern scene, Distant Rain, achieved $21,000 at the Altermann Galleries’ sale.

Altermann Galleries’ signature late summer event in Santa Fe, New Mexico, garnered $2.2 million in a sale led by T.C. Cannon’s painting, Beef Issue at Fort Sill, which sold to a telephone bidder for $180,000, topping its high estimate and far exceeding its low pre-sale estimate of $120,000, according to auction officials. The outsized acrylic was just one among select offerings presented by Altermann Galleries at a sale that marked its largest auction to date, featuring a wide variety of art, officials said in a statement.

Works by Fritz Scholder, the late Native American artist known for using bold colors and creating iconic images enhanced by the painter’s post-modern sensibility, showed strength during the two-day sale. Scholder’s Study for Indian with Shield, went for $9,600 compared to pre-sale estimates ranging from $6,000 to $9,000, and Laughing Dog After Traube achieved $10,200.

Collectors in person, by phone and online ignited a lively round of bidding for Andy Warhol’s John Wayne from the Cowboys and Indians series, with the pop art king’s Southwest-influenced work ultimately fetching $81,600, nearly twice is lower range estimate.

The auction house saw the talented set of artists whose works it frequently handles perform above expectations at the Santa Fe sale, with pieces by Ray Swanson, Frank McCarthy, Martin Grelle and George Phippen selling higher than pre-auction estimates, officials said. Along those lines, Arizona artist Ed Mell’s Distant Rain, climbed to $21,000 or $6,000 more than its low estimate.

Four woodblock prints by Gustave Baumann sold above or within predicted ranges, with the top lot, The Sycamore, going for $11,875 compared to estimates ranging from $6,000 to $9,000.

“We were pleased with the overall results from the auction,” owner Richard Altermann said in a statement.

A wall-sized mountain scene by Edgar Payne, the early-to-mid-20th-century artist celebrated for his depictions of the Sierra Nevadas, realized $223,500 to lead Bonhams’ sale of California and Western works on August 1 in Los Angeles. The Jungfrau, Payne’s oil rendition of a peak in the Alps, represents the American landscape artist’s work produced during a European tour with his family, according to Bonhams. “Anyone who appreciated the grandeur of the Sierras as much as Edgar Payne would be overwhelmed by the beauty of the Alps. The enormity of these mountains is extraordinary, and Payne must have been immediately inspired to paint them and try and capture that grandness,” Bonhams’ officials said in catalogue notes about the 1923–24 painting that captured the imagination of bidders nearly a century later.

A smaller and double-sided painting by Payne — working in one of the West’s most famed mountain ranges and in his familiar and favored surroundings — brought $137,500 to become the second top seller, with the reverse side of A Rider with Packhorses in the Sierras featuring a separate scene, Sierra Lake.

In a sale that saw strength among name-brand California impressionist painters such as William Wendt, artist John Frost [1890–1937] rose among the ranks of equally talented contemporaries to capture the third top slot at an auction that totaled nearly $3 million.

Desert (Prospector), which demonstrates Frost’s mastery of atmospherics and his painterly style, rose to achieve $112,500, or more than three times its high estimate. The oil on Belgian linen represented a work from the George Gund III Trust in San Francisco, California.

Bonhams’ Director of Fine Arts, Scot Levitt, said the sale elicited strong and active bidding, with a perceptible increase of online bidders. He also noted that unique works and those from private collections performed especially well.

This year’s gathering in Reno, Nevada, of collectors attending an annual event that is seen as a bellwether of Western art sales, may have found themselves unprepared for the sheer number of offerings representing some of the finest works by some of the world’s finest artists at an event that saw more than 95 percent of lots sold.

A Close Call, an action-packed piece by W.R. Leigh on a canvas whose large size — by the artist’s standards — underscores the degree of imminent danger horse and rider have narrowly escaped; the work achieved $1,155,000 and led sales amid an auction that totaled more than $16.1 million. What distinguishes the yearly sale in Reno — at the Grand Sierra Resort this year — is the quality of works that make the cut for a lineup that reads like a roster of Western art royalty.

The 35-by-30-inch oil by Leigh is no exception. Auction partner Mike Overby said the artist was on a par with Western art giant Frederic Remington for expertise in depicting equines such as the American paint horse seen hoofs flying in A Close Call. “It’s by far the highest quality Leigh that has been seen at auction in many years; it’s a museum-quality painting,” Overby said of the composition. It was last sold in 1991 to a private collector in Wyoming and, though it has now changed hands, it again will achieve pride of place in a private collection.

At a time when the U.S. is still basking in the 2016 glow of the National Park Service centennial, works by select artists who specialized in painting some of the West’s most stunning vistas have strengthened in appeal and value.

John Fery was not the least of these. Hired by railroad magnate Louis Hill in the early 20th century to capture the dramatic scenery of Montana’s Glacier National Park, Fery’s depictions were used by the Great Northern Railway to promote tourism in the area, according to auction officials. The artist’s Lake McDermott, Glacier National Park, a composition of falls, lake, mountains and muted skyline, sold for $71,400, which compares to estimates ranging from $30,000 to $50,000, and which represented the second highest sum ever fetched at auction for a work by the artist, Overby said.

That genius lies in the eye of the beholder is a idiom demonstrated, stroke by stroke, by master of landscape art Thomas Moran. The artist is to romanticism in painting as William Wordsworth was, decades before, to its poetic expression in words.

The Rio Virgin, Southern Utah is a masterpiece of its kind, which is one reason the river canyon scene, though medium in size — 20 by 16 inches — is large in impact. The painting, created in 1917, sold for $651,000, a bargain for a piece that Overby described as possessing “everything you want in a Moran,” including his penchant for producing rich, luminous colors.

Cause for applause, but perhaps not surprise, was the amount achieved by a Charles Russell gouache on paper entitled Montana Winter. The small work conveys the grave threats tied to the season of severity under the Big Sky, with a bison herd warily eying a trio of wolves on the hunt.

Montana Winter arced far above its pre-sale estimates to achieve $656,250 after a bidding war between two collectors, one in the room and the other on the telephone. “It never surprises when a Russell completely disregards its estimates and triples or quadruples it,” Overby said. “In this case, we had two savvy collectors who both wanted it and had deep pockets.”

Overby said the auction showed the strength of the genre as well as the appeal of certain artists, including Howard Terpning. Prices realized for five of six Terpenings surpassed their estimates, a fitting trend for an artist whom Overby described as “hands down the best contemporary painter.” Such complements suit the talent at hand. The auction saw Terpning’s Whiskey Smugglers, a gouache on paper painted in 1998, go for a hefty $819,000.

And, in a trend tracked over the past several years, works by top Taos School artists rose sharply in price. A key example is Riders in the Sage, an E. Martin Hennings painting that brought $267,750, or nearly double its high estimate.

Wildlife art impresario Carl Rungius’ Out of the Canyon, depicting grizzly bears lumbering along a rocky outcropping, went for $476,000 in the sale of a painting that had been held for decades by the same family and its descendants, according to auction officials.

“The grandfather of the family who consigned the painting had commissioned the piece and was a Rungius patron,” Overby said.

The series of events that make up the Western Art Show during Cheyenne, Wyoming’s storied Frontier Days was capped by a so-called “sculptych” by celebrated Wyoming artists Chris Navarro and Brandon Bailey. The term, coined by Navarro, describes one of his sculptures positioned between two paintings by Bailey and all centered on the same subject matter: an accident Navarro had on horseback in an artistic creation entitled Heck of a Heck of a Wreck. (Navarro’s bronze is individually named Heck of a Wreck while Bailey’s pair of paintings show the cowboy roping in Before the Wreck and the cowboy careening to the ground in After the Wreck.)

The collaboration is the first of its kind for the artists and the aptly named work, first shown in Cheyenne, has since seen a second production by the artists. It set a new record price for the show and was auctioned in a manner as unique as the “sculptych” itself, said Kathryn Boswell, auction coordinator. “Each piece was initially sold separately and the bidders knew it wasn’t a final sale,” she said. “We then added them up and started the bidding higher than the sum total of all three pieces.” A single fortunate collector gained the artwork, which Boswell described as “intriguing and compelling,” for $19,500.

Navarro, a former professional bull and bronc rider, is behind more than two dozen monumental bronzes that have been placed across the U.S. But his Wyoming-based works, including a larger-than-life sculpture of a bucking horse for the University of Wyoming, have become as familiar as the breathtaking vistas and wide-open range of the Cowboy State itself.

“All great art tells a story and the more people relate to the story, the more they relate to the art,” Navarro said of his three-piece collaboration with Bailey. The “sculptych” was among 97 works of art that sold during the Frontier Days’ show, which achieved a total of $280,000. 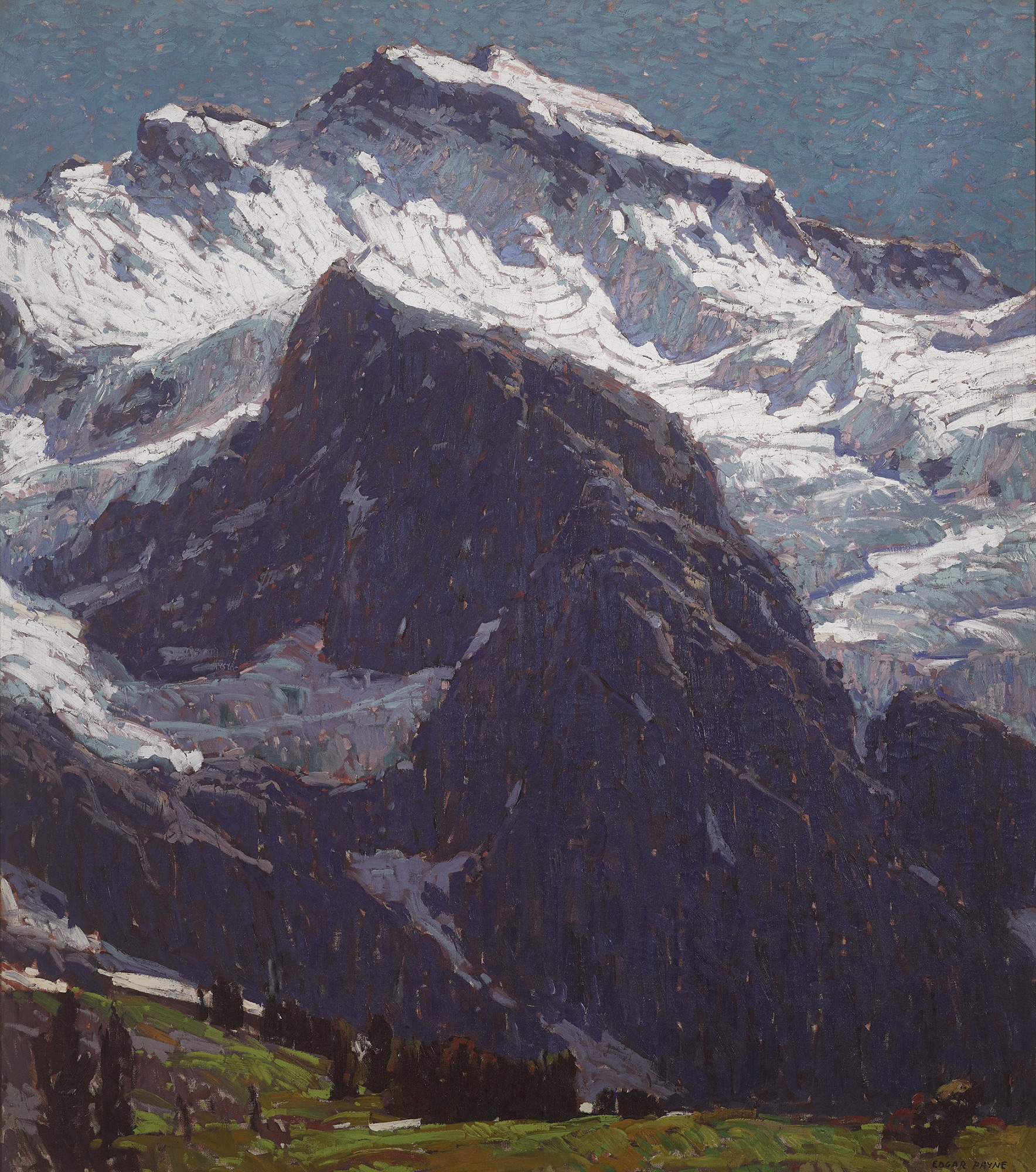