With a presidential campaign, Election Day and a tragic national disaster on the East Coast overshadowing much of daily life, the fall art season seemed to be a welcome distraction for many collectors.

Events all over the country attracted patrons and resulted in significant sales numbers in an otherwise reticent economic period. At the Jackson Hole Art Auction in September, serious collectors seemed to hold their breath while holding back on bidding, but that didn’t prevent reports of a healthy $7.7 million final figure. Likewise, in Cody, Wyoming, the Buffalo Bill Art Show and Sale reported improved figures over last year, but most importantly, as art show director Kathy Thompson stated, “It was great to see such positive energy from all of our artists and patrons.”

The same sentiment was echoed at the Eiteljorg Museum’s Quest for the West opening night event, where they reported the largest number of patrons in attendance so far in the show’s seven-year history. In the last quarter of the art calendar, we are hoping to keep that positive energy in motion.

In a gathering of some of the most notable contemporary artists in the West, the American Women Artists showcased inspirational works from master and signature members. The 15th Annual Master & Signature Member Show and National Juried Competition Exhibition was well attended and drew renowned artists Stephanie Birdsall, Kim Casebeer, Joni Falk, Gay Faulkenberry, Donna Howell-Sickles, Carol Swinney, Linda Tippetts and Star York, all of whom gathered to exhibit works and to teach a master painters’ class. The weekend in southern Arizona launched with a reception at the K. Newby Gallery in Tubac and concluded with a plein air paint out, wet paint sale and, ultimately, the Desert Museum show. AWA honored artists with 14 distinctive awards; Angela De La Vega received the highest honor of Best of Show for her painting Summer.

The second annual Cowboy Crossings event was held in Oklahoma City, with the National Cowboy & Western Heritage Museum hosting 39 artists and more than 300 guests for opening night. The evening resulted in $1.2 million in art sales, with a portion going to fund the Museum’s programs and operations. The museum presented the longstanding Traditional Cowboy Arts Association (TCAA) Exhibition and Sale, now in its 14th year, alongside the Cowboy Artists of America (CAA) for its 47th Annual Sale & Exhibition. The combination, dubbed Cowboy Crossings, offers collectors of Western fine art an unparalleled opportunity in one location.

The combined exhibit included 163 pieces of Western functional art and fine art by many of the best contemporary Western artists in the nation. During opening weekend patrons and artists took part in seminars, receptions and an awards banquet.

Announced during the banquet was a new TCAA Fellowship Program created to cultivate an individual with an above-average passion and dedication to their discipline. The fellowship, valued at $12,500, was given to Braidie Butters. Each year the TCAA presents a member of the CAA with the TCAA Award for the best portrayal of a Cowboy subject. This year the honor went to Jason Rich of Utah for his piece Through the Still Waters.

With a celebratory vibe in the air at LAMA’s 20th anniversary auction, new records were set for artists Sheila Hicks and De Wain Valentine, while the sale totaled nearly $2.9 million for more than 300 Modern art and design lots. Highlights included textile artist Sheila Hicks’ tapestries, Tahoe Wall and Tahoe (Rainbow), which exceeded estimates between $20,000 – $30,000 each and sold for a collective $175,000. A large-scale sculpture by De Wain Valentine broke a record at a realized price of $81,250. The top-selling lot was Untitled, by Sam Francis, which realized $125,000. In total, 87 percent of the total lots sold.

Starting with a small but significant auction to launch the fall art season, Sotheby’s, New York reported a healthy $3.4 million total for the American Paintings, Drawings and Sculpture sale.

The top-selling lot was a seminal piece by Norman Rockwell [1894–1978] entitled Is He Coming?, which sold for double the high estimate at $602,500. Western artists were represented well, including a work by Elling William Gollings, which realized $53,125, along with lots from Birger Sandzen, John Clymer, W.R. Leigh, Maynard Dixon and several other seminal artists.

Topping the $1 million mark, the 31st Annual Buffalo Bill Art Show and Sale noted an uptick in sales from 2011 of 13 percent.

The notable fine art sale tops off Cody’s famous Rendezvous Royale week and encapsulates the spirit of place by offering works with a Western theme, relating to the land, people and wildlife of the American West. Award-winning artwork at this year’s show included: The Premier Platinum Award for $20,000 won by artist Nikolo Balkanski for his oil painting entitled Signs of Spring; the Wells Fargo Gold Award for $10,000 was won by artist Paul Waldum for his pastel, Transition of Seasons; and the honored artist for the 2012 Buffalo Bill Art Show and Sale was Buckeye Blake.

The crowning event of Jackson, Wyoming’s Fall Arts Festival was held at the Center for the Arts drew myriad collectors interested in classic Western and sporting art from established contemporary artists and some of the biggest historic artists in the genre. Presented by Trailside Galleries and Gerald Peters Gallery, the auction culminated a weekend of high art in the Rocky Mountain West. While the overall tenor of the day was a bit lackluster, Internet bidders dominated the auction, bringing the final tally of $7.7 million in sales for a significant total.

Not surprising, the top-selling lot was an unusual pastel on paper by cowboy artist Frederic Remington [1861–1909], entitled John Ermine, which sold at its estimate for a $600,000 hammer price. Other highlights included Charlie Russell’s [1864–1926] Unbranded, an oil on canvas, which hammered at $500,000 with lively phone bidding.

Art patrons enjoyed an energetic sale at the National Museum of Wildlife Art in Jackson Hole. More than 500 registered guests bid on their favorite artworks, choosing from more than 300 lots, with an oil painting by 2012 Featured Painter Tucker Smith bringing in the top sales price. Total gross art sales for the 25th anniversary event are estimated to surpass $545,000.

Top sellers for the 25th anniversary installment of the annual Western Visions fundraiser for the museum were Tucker Smith’s Through the Aspens, for $40,000; Ken Carlson’s Green Wings and Reeds, for $24,000; Steve Kestrel’s Colorado Squawfish, for $18,000; Lindsay Scott’s Distant Thunder, for $17,000; and Adam Smith’s Coast Guard, for $15,600.

James Morgan won this year’s Red Smith Award — the artists’ choice honor — for his Spring Greys piece. Mary Roberson won the People’s Choice award for her Little Buckeye, which is the museum visitors’ popular vote. Ralph Oberg won the Trustee’s Purchase award for his A Wildlife Miniature (Red Squirrel), which was acquired for the Museum’s collection. And finally, Andrew Denman won the Bob Kuhn Award for his Mocha the Sloth, reflecting his sketching expertise.

Dubbed the “largest Western art sale east of the Mississippi,” the 7th Annual Quest for the West at the venerable Eiteljorg Museum was a great success, sporting a record-number 450 guests on opening weekend. With a short-list of present masters of their craft, the event showcased the works of the brightest artists in the art market from coast to coast.

Sculptor John Coleman received the event’s highest honor as the 2012 Quest Artist of Distinction for his bronze entitled 1804 – The Newcomers. Other significant awards included the Patrons’ Choice Award for painter Curt Walters, presented by The Booth Western Art Museum for Crystal Rain; the Artists’ Choice Award was granted to P.A. Nisbet’s Sovereign Sky, who was also honored with the Harrison Eiteljorg Purchase Award, presented by The Western Art Society for Beneath the Blue Moon Bench; Doug Hyde received the Cyrus Dallin Award for Best Sculpture; the Henry Farny Award for Best Painting went to Curt Walters’ Temple Bar: Lake Mead; Howard Post was given the Victor Higgins Award of Distinction for best body of work in the show; and finally, John Coleman will be honored with a one-man show at Quest 2013. 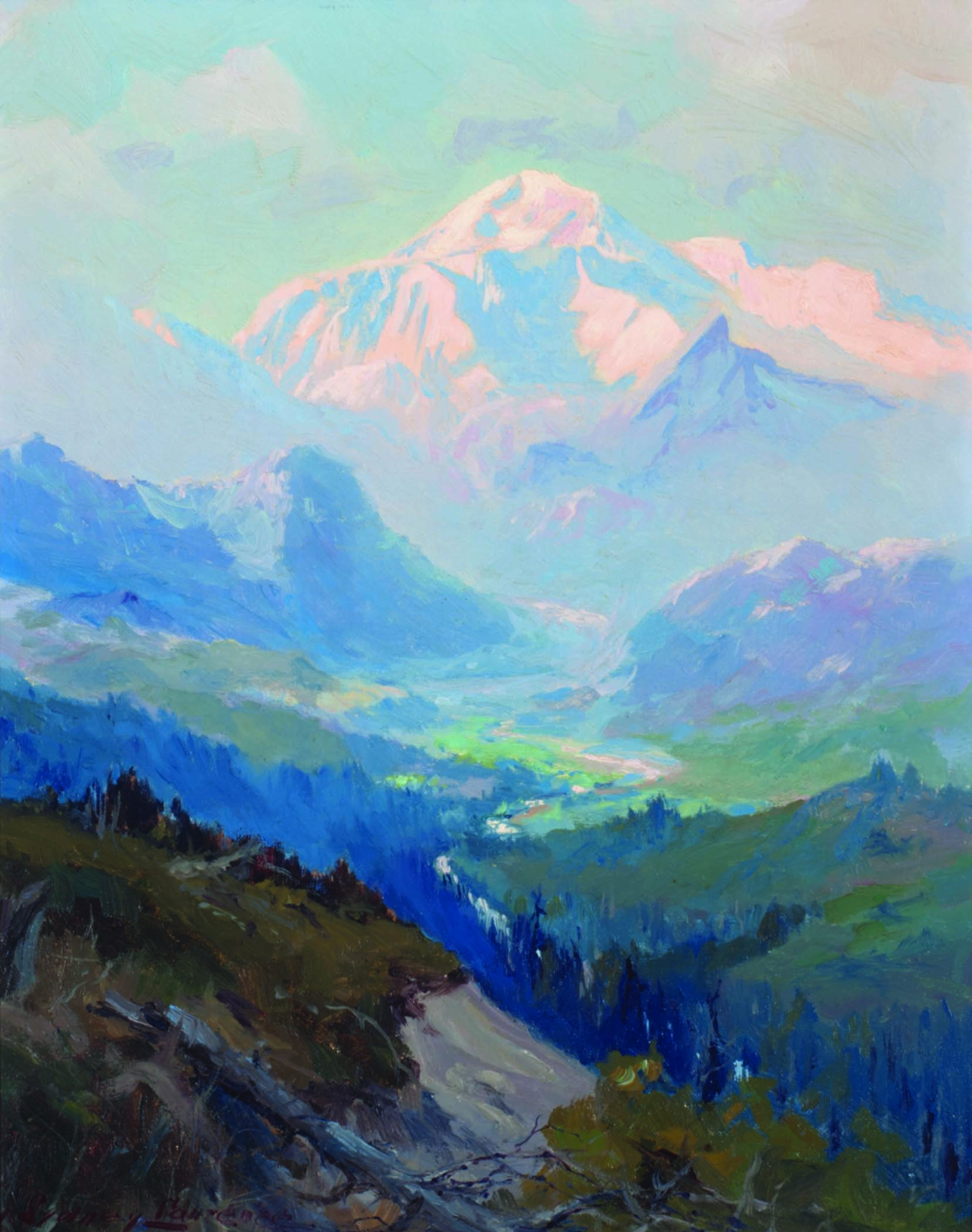 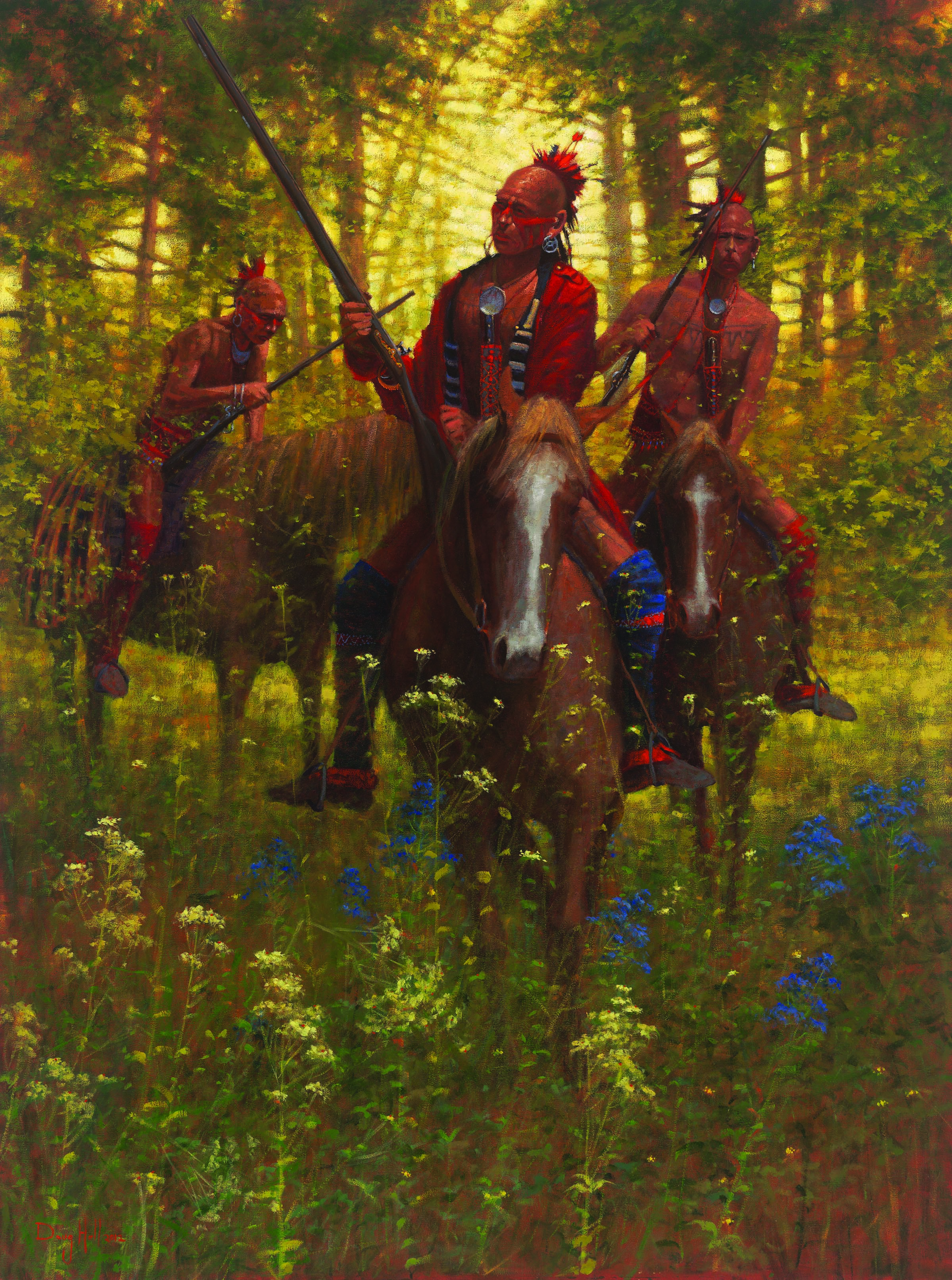 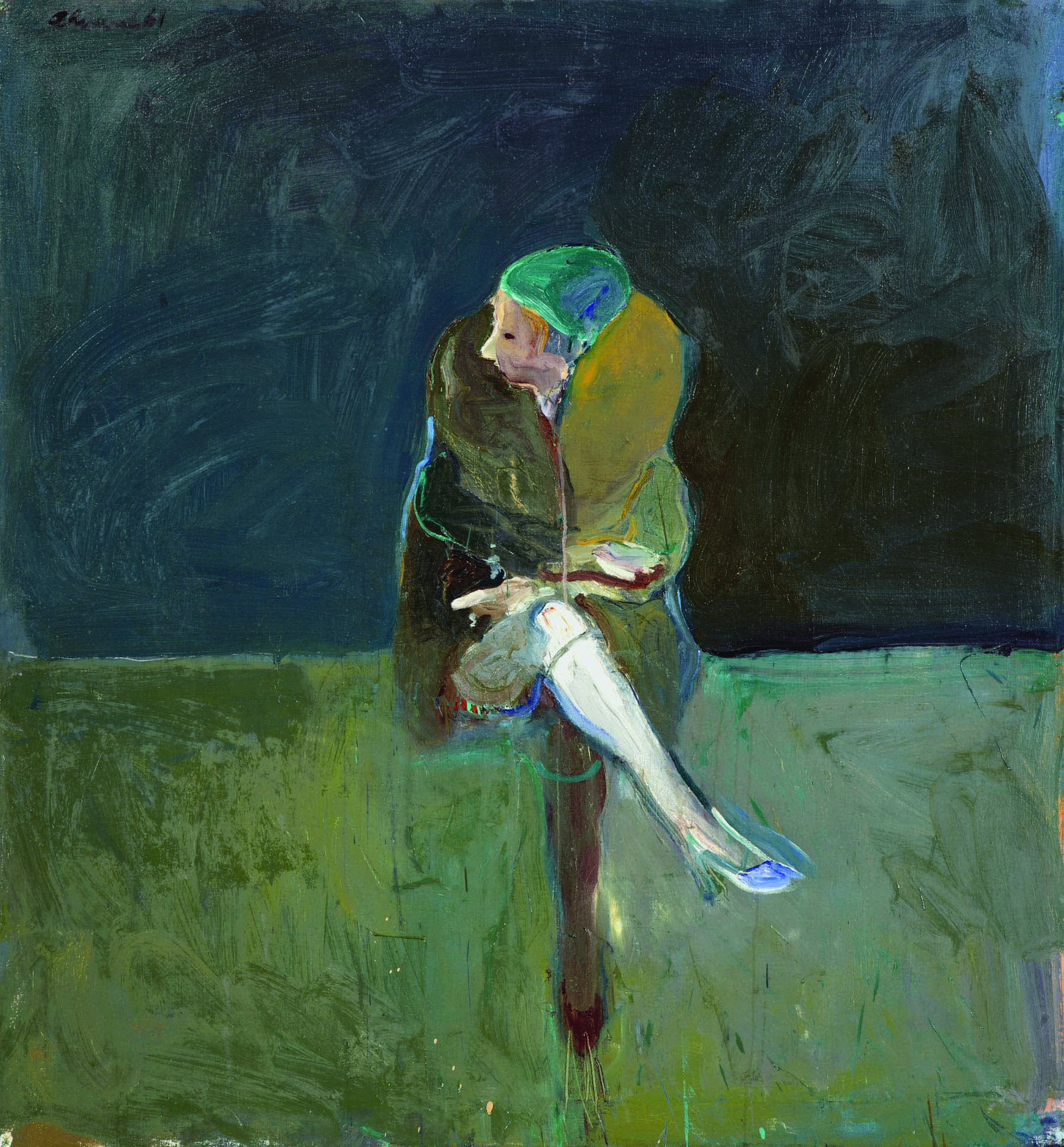 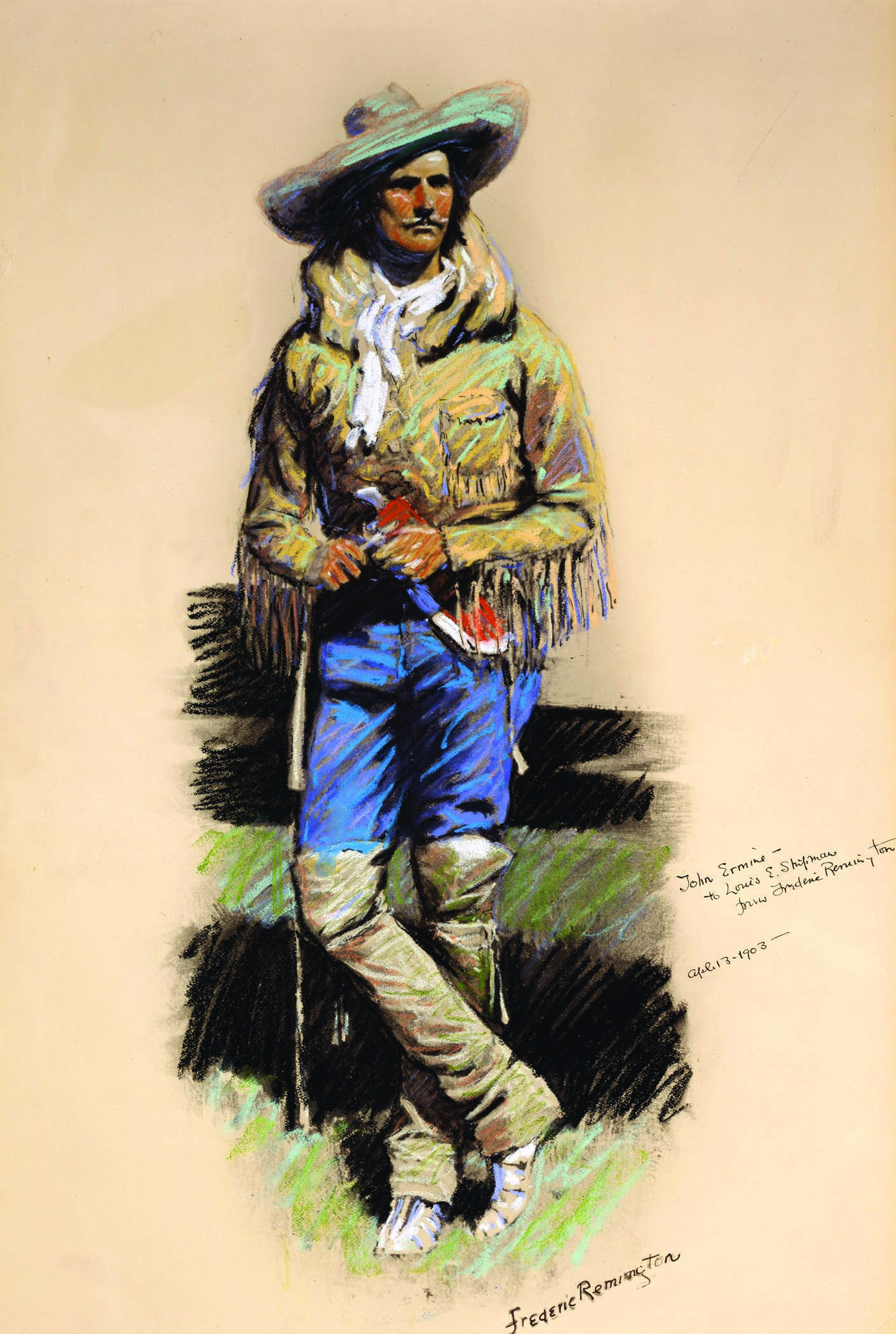