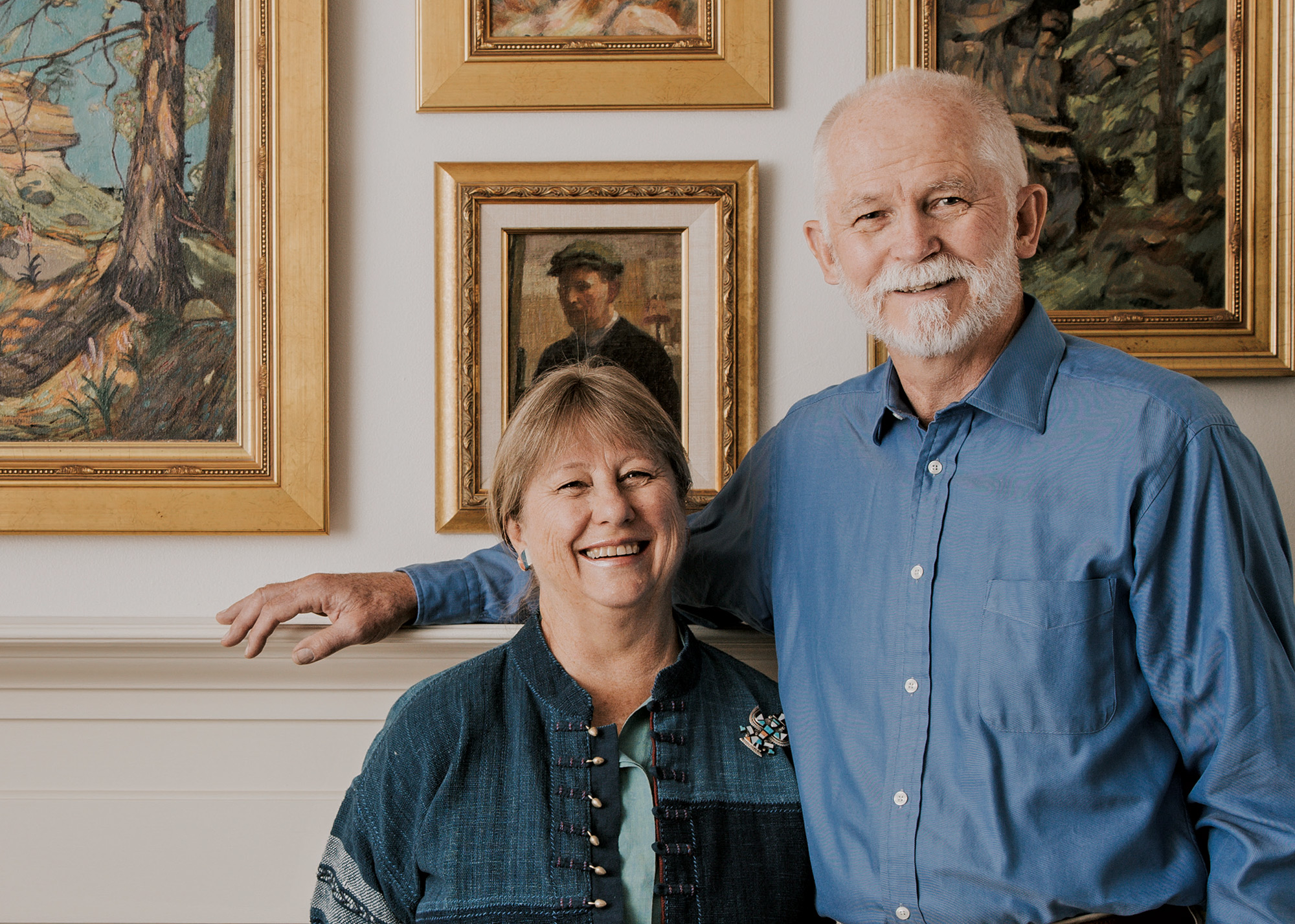 When Deborah and Warren Wadsworth began collecting and researching historic Colorado art in the early 1970s, their primary research tool was the Denver Public Library. “We drove them crazy,” Deborah says. Since then,  the couple has more than paid back their nuisance debt. They’ve both volunteered extensively for the library, and, with her husband’s assistance, Deborah has curated several important exhibitions of historic Colorado art there.

Deborah also co-curated an exhibition of Colorado Modernists at the Kirkland Museum of Fine & Decorative Art with Director Hugh Grant and has lectured, written and co-authored articles on Colorado art. Currently she is in the research stage of curating a new show at the Denver Public Library. Opening in April 2018, the nine-month exhibition will highlight the institution’s significant collection of historic Colorado art and the library’s interaction with the Denver art community for more than 100 years.

Warren is a fourth-generation Coloradan whose ancestors made Denver their home, while Deborah’s family has been in the state since one set of grandparents homesteaded near Steamboat Springs and the other left Scotland for mining engineering in the Colorado Rockies. As young newlyweds 45 years ago, the Wadsworths had little money and less on their walls. Each brought one painting into the marriage, both by Colorado artists. Today their collection comprises artists from Colorado and elsewhere, living and deceased, traditional to Modernist, including Charles Partridge Adams, Jozef Bakos, John Edward Thompson, Helen Henderson Chain, Harvey Otis Young and Nicolai Fechin.

The Wadsworths worked in technical fields before they retired — Deborah in chemistry and Warren in computers — and the couple discovered that their passion for history and art was an exciting way to round out their lives and share something they love. “It’s really been a joy to us over the years,” Deborah says. “It’s enriched both of us and has been a lot of fun.”

Deborah Wadsworth: The opportunity to see the world and particularly our part of it, through another’s eyes and seeing not only different views but different times. And the sheer visual delight! We rotate our collection in the house several times a year, and it’s lots more fun than buying a sofa. Warren Wadsworth: A love of creative processes, and in the beginning it was a rescue of unloved pieces.

D.W.: Both of us are Colorado natives with a strong interest in local history and art. W.W.: We couldn’t afford major European and American artists, so here was a whole untapped area that was little appreciated. We started a little Colorado art rescue project, finding pieces in basements and thrift shops.

W.W.: An Angelo Di Benedetto abstract that I accepted in lieu of a debt.

D.W.: The John Edward Thompson landscape that I grew up with and inherited from my parents. It’s meaningful to me on a variety of levels.

W.W.: A Morgan Wagner landscape. He was an up-and-coming talent at the Broadmoor Art Academy who achieved national recognition but died young and fell into obscurity.

D.W.: When I saw “Collection of Deborah and Warren Wadsworth” on the labels of pieces we’d loaned to an exhibit.

W.W.: When I couldn’t stop buying my “little treasures.”

WA&A: Tell us about an artist whose talent you recognized early.

D.W.: He did conservation work on historic pieces for us first, and he was so knowledgeable and his insight on those artists was a revelation to us.

W.W.: We finally got to the point where we had to have some of his paintings.

WA&A: Is there a historic artist whose work and life you were especially excited to research?

D.W.: I loved learning about and curating a show on Colorado’s first resident woman artist, Helen Henderson Chain, who led a fascinating life.

W.W.: John Edward Thompson’s Organization of Rocks and Trees. It was the first Modernist piece shown in Colorado and caused huge controversy. We passed it up the first time, thinking we couldn’t afford it. We regretted it immediately. When we saw it again, years later, we bought it immediately, paying three times the original price.

WA&A: If you could meet any artist in history, who would it be?

D.W.: Paul Cézanne, because both Picasso and Matisse called him “the father of us all.”

W.W.: We will donate some to the Denver Public Library and the Kirkland Museum but hope that many pieces find homes with private collectors who will love them as much as we have.