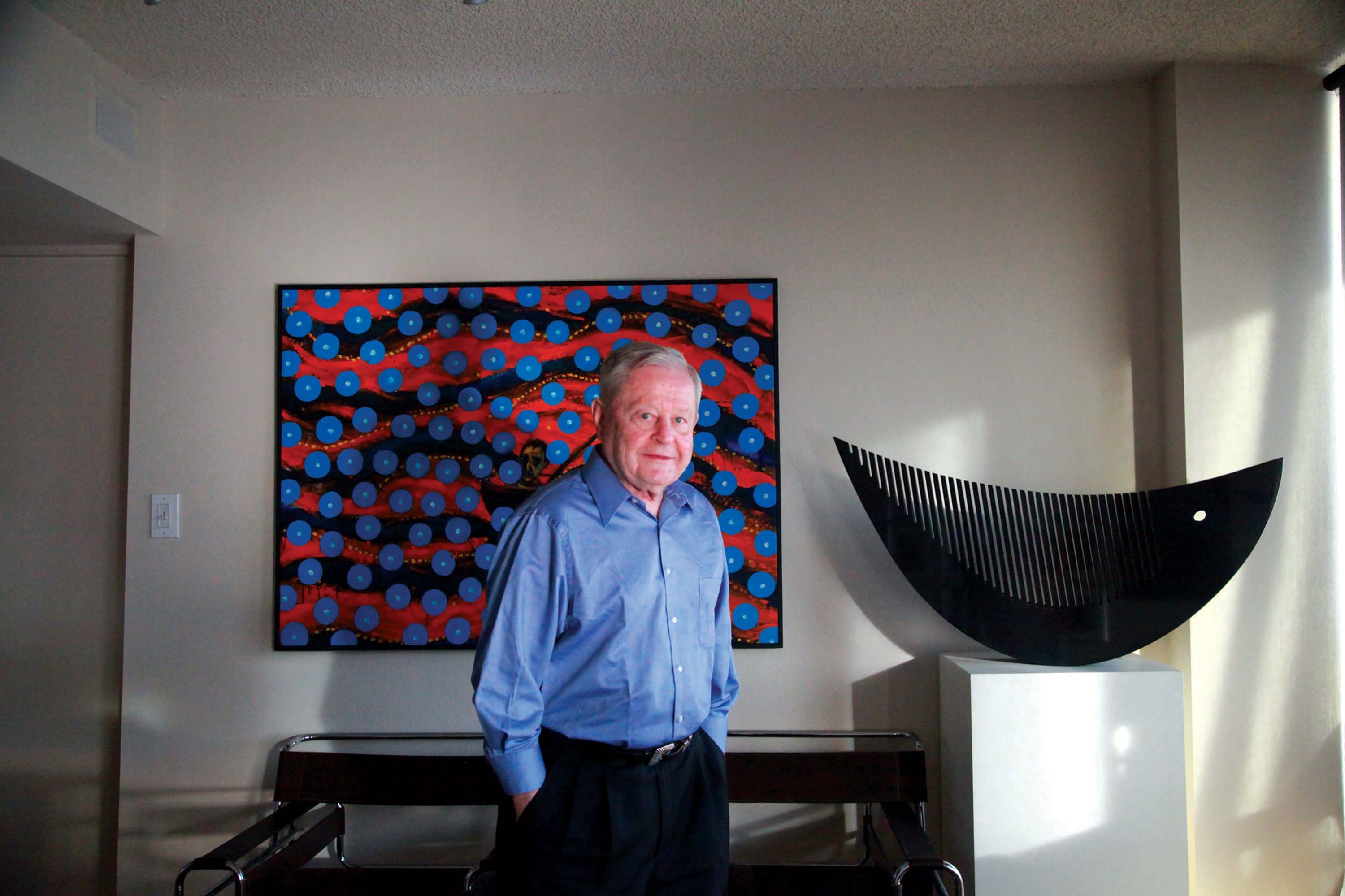 “Osmosis,” says Dr. Eric Jungermann, describing how he arrived at collecting art. It was through his late wife, Eva, who attended Black Mountain College in North Carolina, that Dr. Jungermann became interested in collecting art.

Black Mountain College was a small liberal arts college in existence for only 24 years, from 1933-1956, but its influence was far reaching. Its faculty included notables such as Buckminster Fuller who created the first geodesic dome, along with artists Josef Albers, Willem de Kooning, Lyonel Feininger, Franz Kline and Robert Motherwell.

Eva Jungermann, who graduated from Black Mountain College and earned a B.A. and M.A. in English from the University of Iowa, met and wrote about many artists as a journalist. Together, the Jungermanns became collectors of, as well as friends with, many of the artists whose work is showcased today on the walls of Dr. Jungermann’s high-rise apartment in Phoenix, Arizona.

A print by Josef Albers of the Bauhaus School greets visitors as they step into the apartment. Just around the corner, early etchings from Marc Chagall’s La Fontaine’s Fable Series cover a wall. Throughout the apartment are works by notables including Keith Haring, who was influenced by cartoons and graffiti; Op-Artist Victor Vasarely; California regionalist artist Roy De Forest; CoBrA artist Karel Appel, and a large collection of Fritz Scholder’s Post-Modern art. Among the contemporary masters in the collection are Henry Schobel, Jesus Morales, Beth Ames Schwartz, figurative artist John Dawson, and the abstract landscape paintings of Jim Waid. Judy Chicago of Dinner Party fame has work hanging alongside her contemporaries.

Dr. Eric Jungermann: I just enjoy collecting — not to invest, but to buy things I like. I like knowing the artists; their lives are interesting and in some way I enjoy that.

DEJ: In the early 60s, my wife and I saw an advertisement in The New York Times about a series of etchings by Marc Chagall. We purchased several at the price of $25 each. A year later the price had doubled to $50 and we bought several more. After that, the price doubled again to $100 and we acquired still more. When the price rose to $150 we quit buying them. Looking back, it would have been a good idea to continue buying.

WA&A: What was the big one that got away?

DEJ: Oh, there were several. One was a Josef Albers. We were living in Chicago at the time. Eva was familiar with Albers work from Black Mountain College. We saw examples of his Homage to the Square series at a gallery in Manhattan. His prices then ranged from $1,500 to $3,500. We picked out the one we liked and we could afford, around $2,500. Then she got into a squabble with the gallery because they wouldn’t pay shipping to Chicago. So over $300, we lost the opportunity to own an Homage to the Square, which is now valued at between $40,000 and $60,000.

DEJ: I’m very drawn to several of Fritz Scholder’s pieces. Since my wife died, I purchased one of Jesus Morale’s “musical” granite fish and I love it. I also purchased one of Judy Chicago’s large glass pieces entitled Modern Amazons, which is one of my favorites, too.

WA&A: If you could have dinner with any living artist who would it be?

DEJ: When he was alive, I enjoyed Fritz Scholder; he was a lot of fun. In fact, we had a photo of Fritz, Eva and myself, and people would ask us, is this your son? We laughed because he didn’t look like either one of us. I dine with artists from time to time — Joel Copeland, Jesus Morales, John Dawson and Judy Chicago.

DEJ: I wish I knew the answer to that. A large Luis Cruz Azaceta painting (a Cuban artist) will go to the Phoenix Art Museum and several others have been promised to different museums, probably for storage in their basement. The rest will go to family and friends and who knows where the art will wind up. A hundred years is a long time!