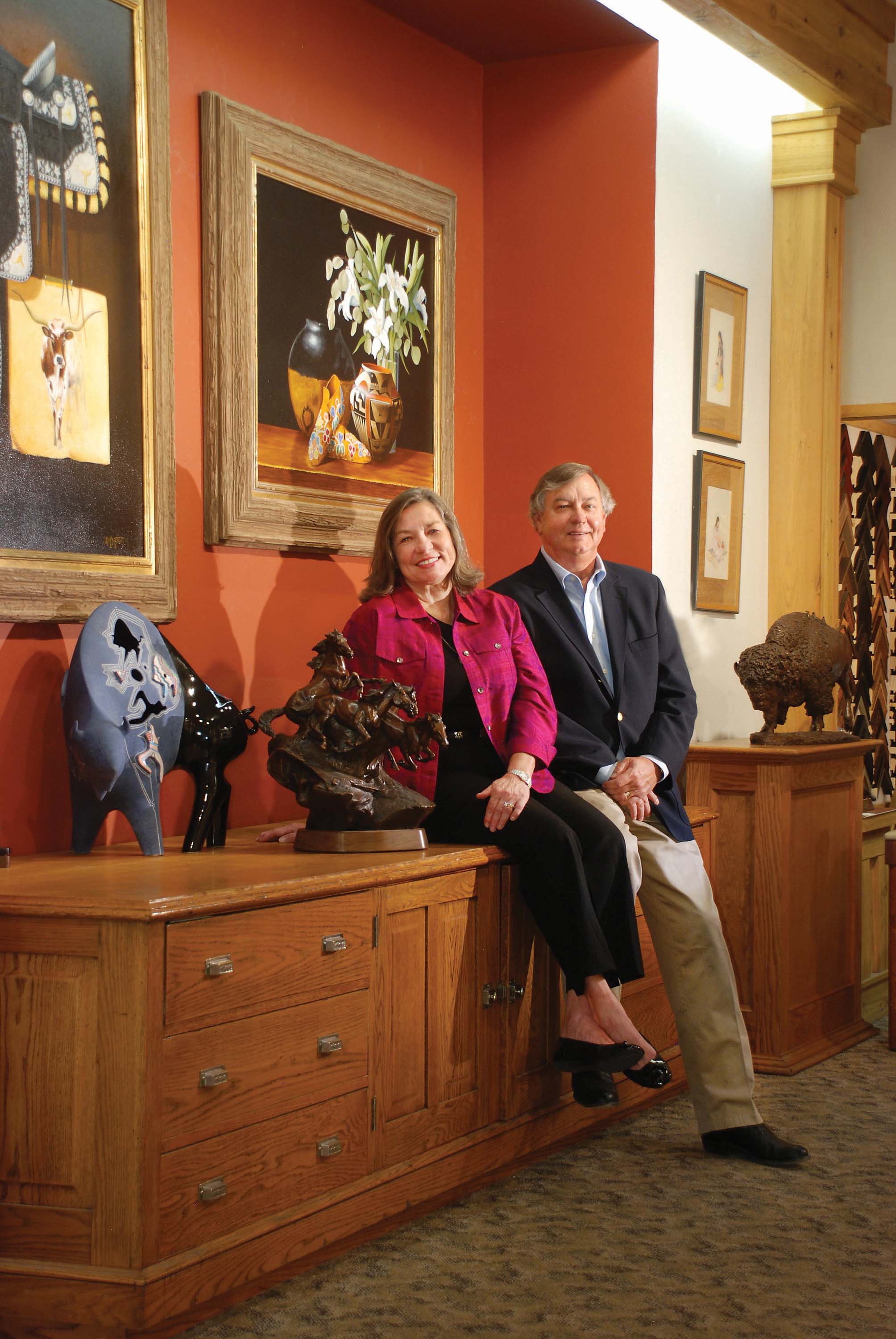 “Running the gauntlet between buying art as an investment versus buying it because we love it is a fine line,” says Nancy Tia Brown. Her husband, Bob, adds, “You can’t be in the business of art without being a collector.” And so goes the continual conundrum for the Browns, owners of Big Horn Galleries in Cody, Wyoming, and Tubac, Arizona.

As a child, Nancy was immersed in the art scene of Taos, New Mexico. Her father, Ernie Fuller, grew up hanging around galleries and watching neighbors Joseph Henry Sharp and E.I. Couse work. He passed his love for art on to Nancy and Bob. In the 1970s, the young couple made a life-changing decision prompted by a proposal from Nancy’s parents that they buy a small print gallery on the main street in Cody.

Nancy was preparing to further her career in education and Bob had no thoughts of being in the art business. On a wing and a prayer they moved to Wyoming, partnered with her parents and within three years of learning from the inside out, took over the business and founded not only a tremendously successful gallery, but one that tested their individual collector’s taste against their business acumen.

The Browns’ keen love for art and business sense led to a major role in establishing Cody’s acclaimed Rendezvous Royale. For three years Big Horn Galleries worked with a local group organizing an art show that had been patterned after the CM Russell event. Realizing it would be much more successful as a public show, they turned it over to the chamber of commerce. Yet the couple has left an indelible mark on Cody’s impressive culture of art.

“We did it for three years then turned it over to the chamber [of commerce], realizing it could go much further if it was a public show. “We are very proud of the show that has brought Cody’s Western art scene into national prominence and spend every year being very involved, just like we were in the beginning,” said Nancy.

Nancy Tia Brown: We collect unique pieces that we know we would pass down to our family. Yes they have value, but at the end of the day the overriding factor is, ‘Gee, we just love it!’ … The love of the subject took us into the business; the nature of the business affects how we collect.

WA&A: What was the first work that you purchased? And what made you choose it?

Bob Brown: Just after we were married we purchased Coming Home on the advice of Nancy’s parents, who said, ‘If you love it, try it.’ It was a mountain man coming home to a tipi with an Indian woman coming out of it.

NTB: For me, it satisfied the romantic aspect of the West.

BB: It was the classic Western scene that satisfied my love of the unique culture.

BB: Which one would we grab if the house was burning, you mean? The Rumsey Barn, Jim Bama’s piece of a local barn. It has a special attachment to time, place and a person for us. It is very personal. When we buy one it has to have that; we see so many.

NTB: When you are in the business, you are almost always a collector, or at least you think like one. We got into it because we loved it. We can’t help but see things come through the gallery and want them. We started out at the lowest level and then the appetite grew and has never ceased, but then the business side kicks in and some have to go.

NTB: Georgia O’Keeffe. She is fascinating in so many ways and it reflects in her art. She was a woman ahead of her time. I think she set a standard for art and women in art.

BB: Charlie Russell, he lived at the end of the era. His modern-day equivalent is Joe Beeler, he lived the lifestyle and recorded it.

NTB: We can name only one?

BB: It was a pastel by Howard Post, the cover painting of a little cowboy on a bluff, created for a book called The Magic Boots.

NTB: Bama’s Mountain Man. It was a beautiful painting and I hated to give up. It was a major piece of his.

BB: We hope it is hanging on our children’s walls and it matters to them. These artists are creating a legacy and our children grew up around them and knew they were a significant part of our lives.

NTB: We want to hear them say as they talk about the paintings on their wall, “ … I knew him when I was a kid.”