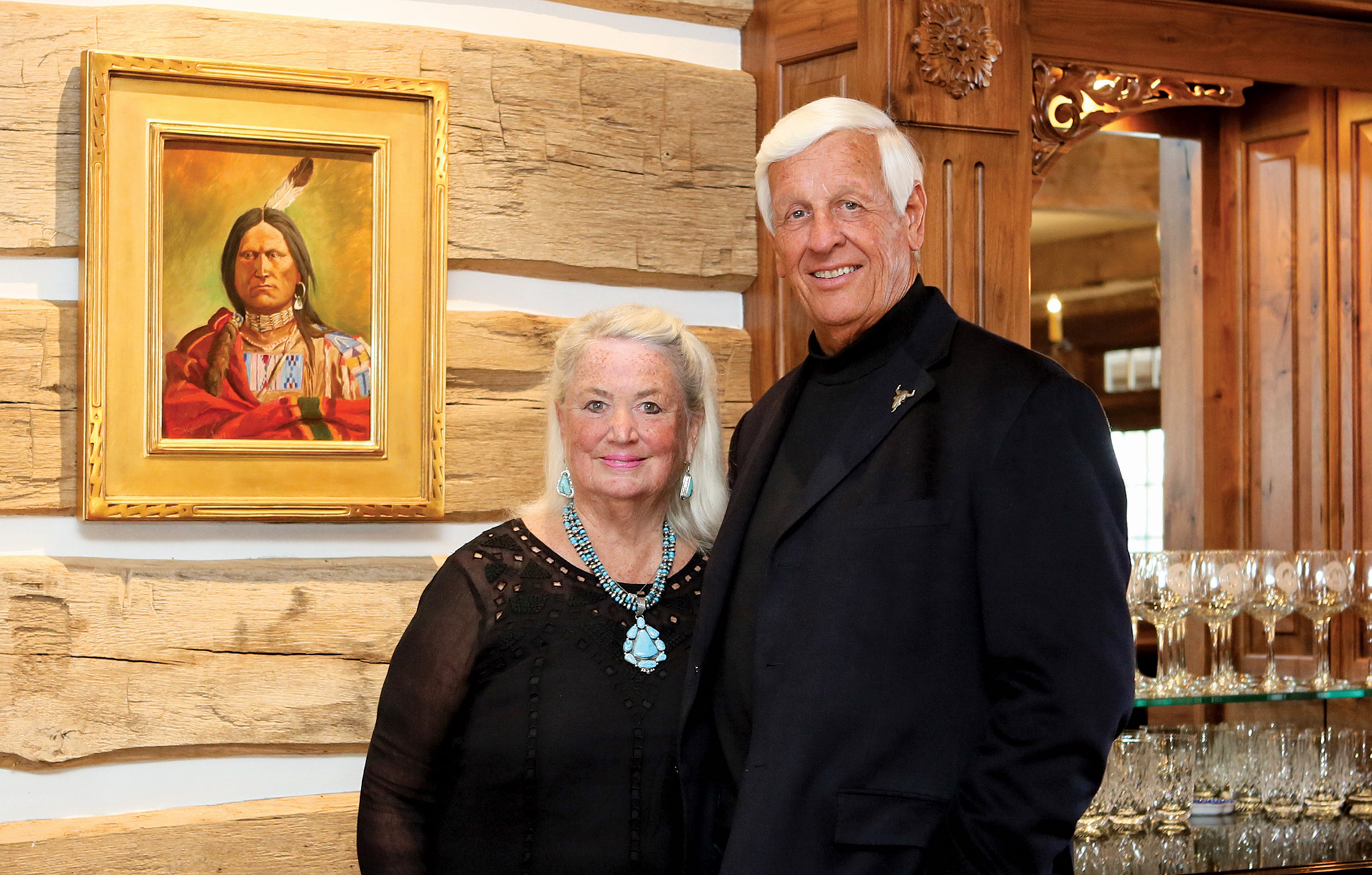 There is only one museum in the nation that bears the name of Charles Marion Russell, the legendary painter, sculptor and documentarian of the American West. The C.M. Russell Museum in Great Falls, Montana, is at the heart of what is really a love story for Joe and Nancy Masterson. The Western art collectors became so because of their passion for the history of the United States and for Russell, whose paintings and sculptures gave artistic flesh and voice to the people, places and prerogatives of regions west of the Mississippi.

The couple, owners of companies that produce food products, are proud to be patrons of the C.M. Russell Museum — with Joe serving on the board for many years. They are strong proponents of the legacy established by the artist and the museum devoted to his work and life.

Nancy Masterson: We went to Montana 25 years ago to attend the annual art show that benefits the Charlie Russell Museum, and it was love at first sight. Prior to the trip to the show in Great Falls, we had not agreed on choices of paintings and sculptures. In 1980, after we had built our new home, a painter visiting us asked why we didn’t have any paintings on our walls, and I said, ‘That’s because my husband and I don’t agree on what we both like.’ That was then; this is now. And we find the same art appealing from a habit formed on the spot in Montana more than two decades ago. While at the exhibit, Joe would look at paintings and say, ‘Gee, I like this one.’ And I would respond, ‘I do, too.’

WA&A: What was the first work you purchased?

N.M.: It was a 4-by-6-foot painting of Glacier National Park by Joe Abbrescia. Today, it still hangs on the wall in our living room.

N.M.: The jewel in the crown of our art collection was purchased at The Russell Exhibition and Sale last March. It’s a portrait by Russell of a Native American, simply titled The Indian. The piece is considered a gem because Russell infrequently painted portraits of Native Americans. I said to Joe, ‘I’m going to buy that painting,’ and as soon as we got to the auction, I knew it was going to be mine.

Joe Masterson: We came to the conclusion that we were Western art collectors when our rooms were filled with paintings and sculptures.

Our collection of Western art and artifacts ties nicely with the architecture of our summer lodge in northern Wisconsin and allows the entire family, including our grandchildren, to live with art. Collecting for us is not about money but about a passion for the history of the United States and the American West. I know wonderful collectors who’ve spent hardly any money and others who have spent millions. You don’t have to be wealthy to collect art; it’s an attitude more than anything.

N.M.: Actually, it was a lunch in 2015 with painter Howard Terpning and American art scholar and author Peter Hassrick. Both men are well-schooled in Charlie Russell history and lore — there were many humorous anecdotes. Both men have amazing senses of humor; we laughed through the entire lunch.

N.M.: We don’t collect as a competition, and we don’t feel anything got away. If other people have their eye on a certain piece and seem to want it more than we do, it’s okay, there will be others.

J.M.: Charlie Russell. I admire his spirit of adventure and independence. The trip from his hometown of St. Louis, Missouri, to the wide-open spaces of Montana was, by itself, an act of courage as well as a hardship. I am impressed by his integrity in depicting the turn-of-the-19th-century West. One of Russell’s great strengths was that he convinced his audience that he was providing a fair representation of the times. He tried to convey on canvas what was really happening to the West and, in that way, provided insight for generations to come.

J.M.: Our paintings and sculptures are housed in our summer lodge on our lake in northern Wisconsin. We hope they will stay there for the next few generations.

Editor’s Note: The 2017 Russell Exhibition and Sale takes place March 16 through 18 in Great Falls, Montana. The event offers a wide range of acquisition opportunities, from auctions to quick draws and more: cmrussell.org.