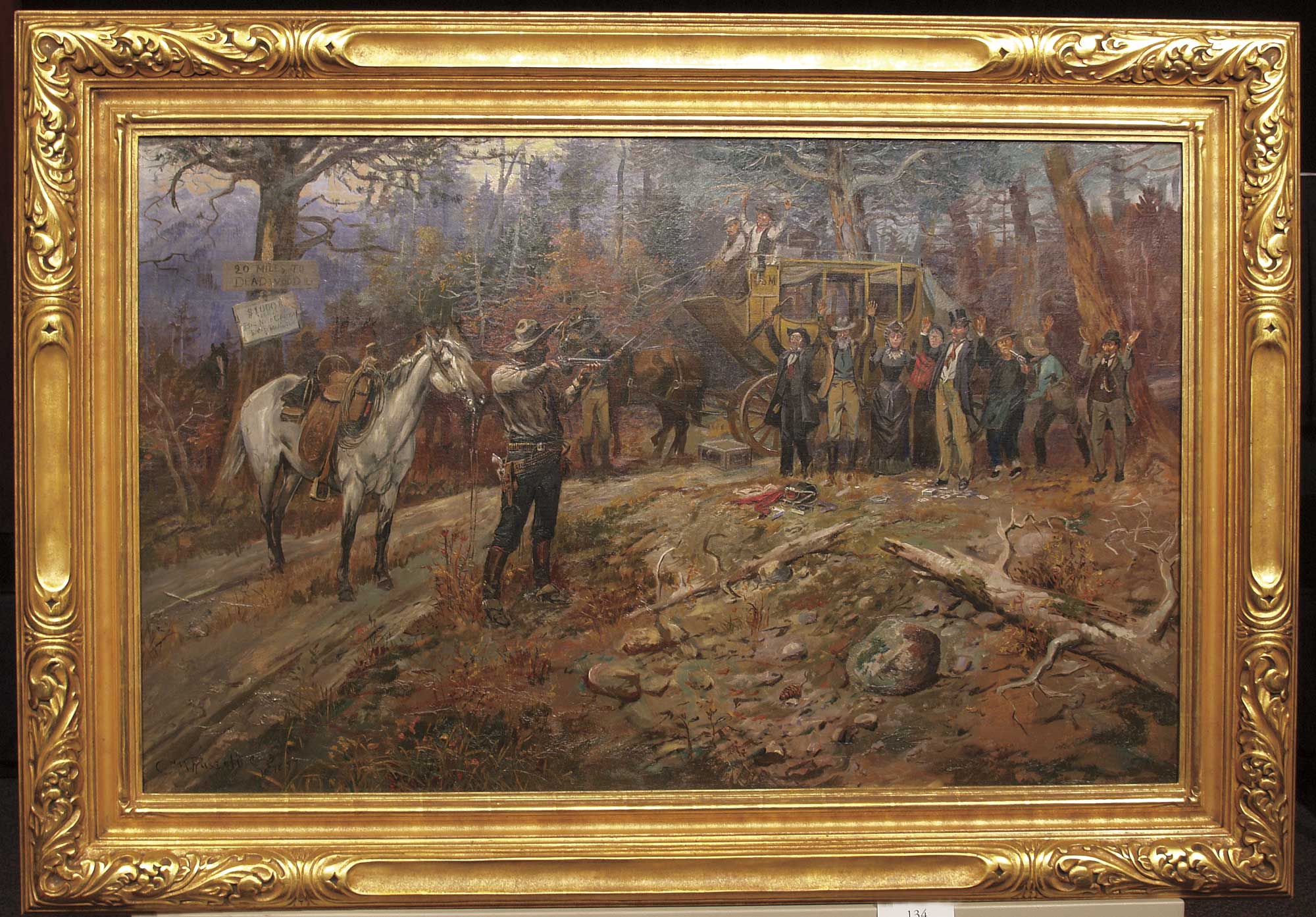 CHARLES M. RUSSELL | "THE HOLD UP" | Oil on Canvas

Sold at $5.1 million, Charles M. Russell’s The Hold Up wrangled the Coeur d’Alene Art Auction’s top 2008 price. But its consignor and new owner were not the only ones smiling that day. Framemaker Greg Drinkwine, whose company, Craftsman Frame Company, completed The Hold Up’s gilded frame just weeks earlier, added another Russell — one of the biggest names in Western art — to his repertoire.

Frames, by origin, are a form of protection, but their aesthetic and symbolic functions are just as important. A brief look at the history of framing takes one from the first moveable frames in the 13th century to elaborate designs surrounding religious Renaissance paintings to the mass-produced varieties of the early 20th century, which led many astray from gilding and custom craftsmanship. Today, collectors are bringing the art of framing full circle with a renewed appreciation for period frames, and the realization that the combined value of painting and frame can paint a pretty picture indeed.

Certainly in the case of the Coeur d’Alene auction, which brought in $36.9 million last year, frames are an essential component to making a sale. “Most of our buyers are primary users, so it’s important for a piece to look as good as it can,” says auction partner Peter Stremmel, who also owns Stremmel Gallery in Reno. “A frame can make that difference.”

The Coeur d’Alene commissions around 40 of the 100 or so frames Craftsman Frame makes each year, and you’ll find similar working relationships around the country. Sotheby’s and Christie’s have used the likes of Manhattan’s Eli Wilner & Company, a period framing specialist whose clients include the Metropolitan Museum of Art and the White House. Founder and CEO Eli Wilner says that 20 percent of their work is for auctions.

For all such framers, historical precedents are paramount. Extensive research is done on each painting to ensure the appropriate historical original, or period frame, is found, or that a replica will emulate exactly what would have been crafted during that time. The artist, when they created the work, the region in which it was produced and who would have framed all factor into the design selection. From here, each manufacturer has its own timeworn process, varying with leafing and antiquing techniques, but every frame is handcrafted, from the first carve to the final patina matching.

“It’s done in an individual way, the way it was done 100 years ago,” says Mike Lopez Jr., president of Richard Tobey Fine Frames, a Los Angeles-based company that has made frames for almost every president since Eisenhower, along with a celebrity-laden list including the likes of DiCaprio, Pacino and Bruckheimer.

The replication process can take anywhere from three to six weeks — well worth the wait, for as Randy Krentz of Thanhardt-Burger simply puts it: “A piece of artwork is not complete without a frame around it.” Interestingly, with the 1979 acquisition of Newcomb-Macklin Company, a legendary Chicago framemaker founded in 1871, Thanhardt-Burger became the oldest continually run framemaking business in the country.

“It’s psychological,” adds Stremmel. “If you see a great painting and it has an equally great frame, that’s the whole package. Without it, a piece doesn’t show to its maximum potential.”

So this July at the Coeur d’Alene, when you see that extra smile on Drinkwine’s face, perhaps it’s not just the sheer joy of his work juxtaposed, quietly and cohesively, next to the likes of a Russell, Remington or Sharp — perhaps it’s knowing that these paintings, some of the American West’s most sought-after, might be whispering, “you complete me” to his gilded glories.

The Frame’s the Thing

Finding a skilled framemaker is the first step in choosing a frame. The working knowledge and historical accuracy a professional can impart is of paramount importance when you’re starting from scratch. Though many hunt for a suitable period-frame first, keep in mind that marrying the right size and style to your painting may prove a difficult and expensive task. If going with a replica, be sure that it matches the detailing and finish of an original period frame. “Ask the framer how they arrived at their choices,” advises Wilner. “And insist on being shown photos of frames the artist would have used.”

The most important aspect to look for is how the aesthetics of the frame are affecting the painting. What is your initial reaction to the juxtaposition of frame and art? Do they match? “If the painting has large planes and bold features, the frame should consist of larger carves and a larger profile,” says Drinkwine. Be sure to also check for quality: How clean are the carves? How well has gold been applied? Are the miters joined properly? If the frame checks out, and is both historically and aesthetically accurate, says Drinkwine, “it creates a unified whole, which has potential to increase the work’s monetary and aesthetic value.”

Generally, it’s less expensive to replicate than to find and restore a period frame. While dollar amounts vary widely, replica frames start in the thousands, and period frames start in the tens of thousands. Yet whichever you choose, what can you do to assure your right-angled investment secures a good return? Unfortunately, there appears to be no straight answer. “It’s really more of a visceral thing,” says the Coeur d’Alene’s Stremmel. “If it’s a great painting, fresh to the market, it’s going to sell well regardless — a great frame just makes the process easier. But a painting always has to stand on its own two feet. Like negligee on a pig, the best frame in the world can’t save a second-rate painting.”