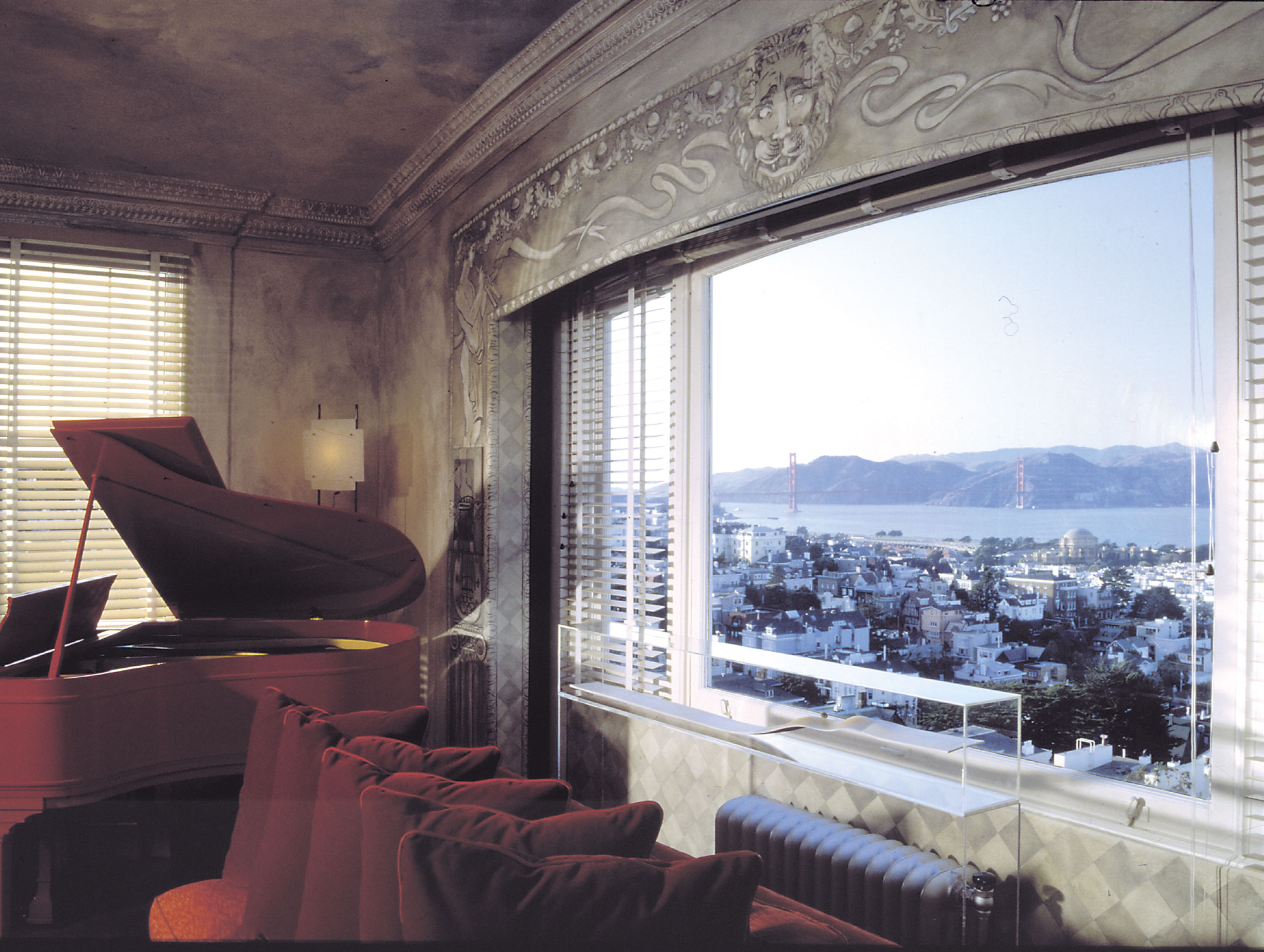 Agnes rescued this piano whose finish was completely ruined and turned it 1955 Chevy Red. “I thought it would be so much fun to have a red piano,” she says. “It is in honor of the great times we had in the 50s and in memory of the more exotic jazz musicians.” Agnes designed all the furniture in the room which is both a theatre and living room. The large screen comes down over the window under the classic frieze.

30 May Designing the West: Agnes Bourne

Saying one is born to be a designer is a cliché, but in the case of Agnes Bourne, it’s very much the case. The evidence is in her history: When, at 12, she was given a camera by her father for a trip to Europe, Bourne captured frame after frame of interior details: chandeliers, curvy leg chairs and tiles, but very few faces. Those pictures are still meaningful reminders of the beauty she witnessed at a young age.

Born in Spokane to parents who traveled a great deal, Bourne was exposed to different cultures and art around the world. The family home in which she was raised belonged to her grandfather and provided Bourne with a rich environment full of antiques and books. As the world was just starting to lick its wounds from WWII, Bourne was unofficially launching her design career with a dog house for her canine companion, Casco, a mutt who lived outside. The structure had three rooms: foyer, bent hallway and a carpeted bedroom complete with window and light bulb. Casco’s abode was created to be user-friendly with a hinged roof for easy vacuuming.

Throughout her adolescence, Bourne was drawn to and deeply affected by a variety of different styles of design. At 12, she visited the White House and was awed by the draperies and chandeliers. At the National Gallery she saw Louise Nevelson’s work for the first time. Nevelson created huge sculptures from materials found in her father’s wood shop. Bourne had never seen such imaginative pieces and continues to be inspired by Nevelson’s work. The Institute of Art in Chicago was another favorite haunt and place of inspiration. There she could be found peering thoughtfully at the miniature rooms by Mrs. Thorne, taking in every detail. Her voyage to Europe and back on the Queen Elizabeth and the Queen Mary also made indelible impressions on the young designer.

Fascinated by everything to do with design, Bourne took a job with a design studio when she was in high school. One day everyone happened to be out to lunch when as Bourne recalls, “A fancy woman came in and needed a kitchen done, ‘Right Now!’ ” It was 1960. The palettes were colorful. She went right to work on her first official job, using harvest gold and turquoise, stainless countertops, a walk-in pantry and the right stoves. The highlight of the job for Bourne was the oven with French doors. The double doors opened out instead of down. Bourne reflects, “I never batted an eye over the project.” Having grown up with an active role in decorating her grandfather’s house with her mother, Bourne was accustomed to large projects.

College years were a mix of travel and study in several places. Bourne spent her sophomore year in Italy, then studied art and psychology, costume design and set design at Mills College where she earned a B.A. in Studio Art and Art History. When she married at 21, Bourne bought a house and fixed it up with a crew of artists who needed something to do to make ends meet. She was the general contractor. In 2008, she completed her fortieth house. That practical experience, along with what she calls extraordinary teachers, taught her that the interplay between color, form and arrangement are paramount. “I compose spaces the same way as I would paint a picture: dominants, subordinates, detail. The process is always the same, the details different.”

Bourne studied with Rudolph Schaeffer at The Rudolph Schaeffer School of Design in San Francisco. His teachings on color and arrangement delved into space and how energy and bodies moved through it. In addition to being a pioneer in the field of color theory, Schaeffer was also a leader in integrating Eastern and Western aesthetic principles. “Agnes has embodied these principles in her own work and handed them down to other generations through her many years of teaching and lecturing,” says David Meckel, of California College of the Arts.

Color is paramount for Bourne. She is fascinated by how it speaks to people and how it makes one feel. “Color is something that people carry with them. It has messages; it is a passionate thing. Color is so important for communication. It shows what kind of character you are and how you surround yourself.” But color has its limitations. John Dickinson, one of her mentors, was adamant that she never put color before form.

Whatever challenge she is tackling, Bourne is always an innovator. She feels strongly about how spaces flow, what clutter means and the balance of light. “Almost everything that resonates with interior designers today — from sourcing locally to repurposing material and objects — can be traced back to Bourne’s practice 20 years ago. She is unafraid of taking risks and unbelievably generous in her trust of and faith in others when collaborating. She is one of the most optimistic designers I’ve ever met,” says Meckel.

The little girl who designed an efficient, warm dog house for Casco has become a superstar in the design world. In addition to developing her own line of furniture distributed nationally by Federated Department Stores, Bourne has taught at Stanford University, California College of Arts and Crafts and the San Francisco Art Institute. She is a passionate advocate for good design and has served on the board of trustees for the Cooper-Hewitt Museum, National Design Museum and the Jackson Hole Center for the Arts, among others. She has been recognized with medals of distinction from the Smithsonian Institution and American Society of Interior Designers, as well as earning the trust and admiration of peers the world over. Grant Marani, partner at Robert A.M. Stern Architects in New York City says of the designer, “When Agnes enters a room, she fills it with joy and surprise. Working with Agnes is a privilege and a delight.”

Five Things to be Conscious of When Planning an Environment

Thea Marx is fifth-generation born and ranch raised, from Kinnear, Wyoming. Much of her career, including her book, Contemporary Western Design, and Web site, ContemporaryWesternDesign.com, has been dedicated to Western style. Her work appears in Living Cowboy Ethics, Western Horseman, American Cowboy and Western Lifestyle Retailer. 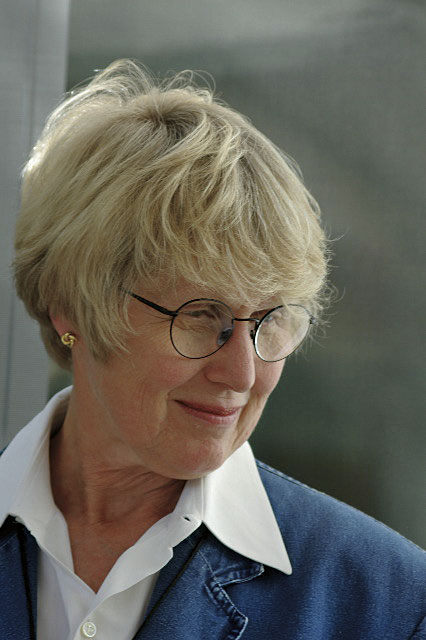 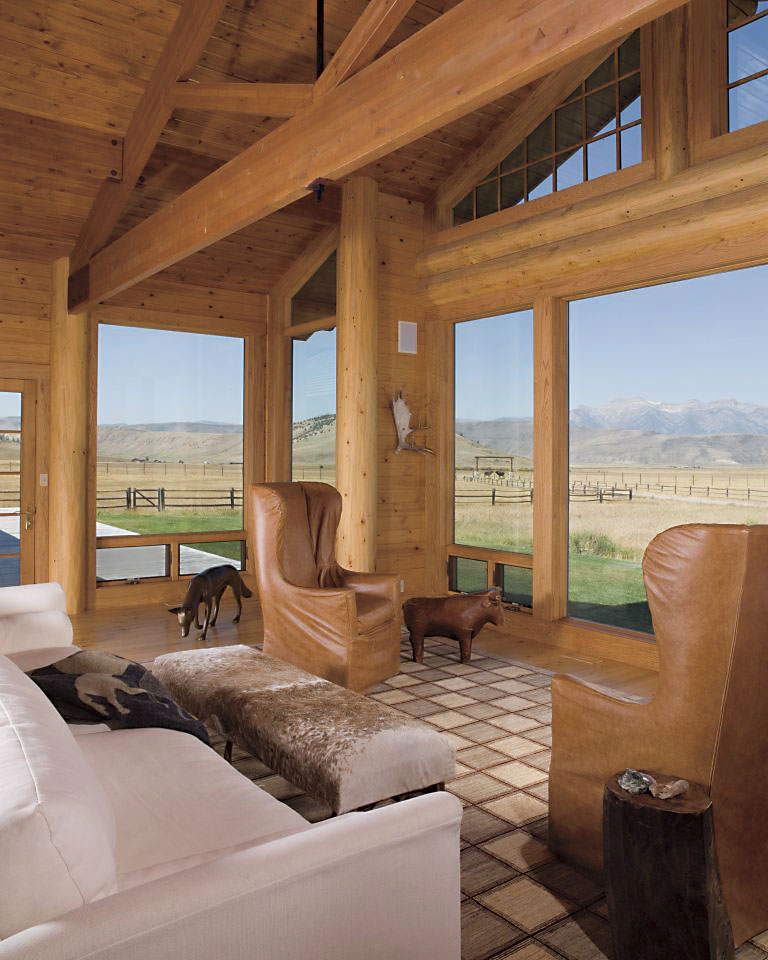 This Wyoming living room is airy and comfortable. The Grand Tetons are clearly visible from the custom designed “Norma Jean” chairs by Agnes Bourne slip covered in leather that reminds her of her favorite leather pants. Coyote bronze by Gwynn Murrill, sofa by George Smith, the leather bull is child’s chair that has been in her family for several generations. Hair on hide ottoman features antler base. Natural wool and vegetable dye carpet is a contemporary tribal design from Pakistan. “Stump” Side table is a beam from a Japanese country house 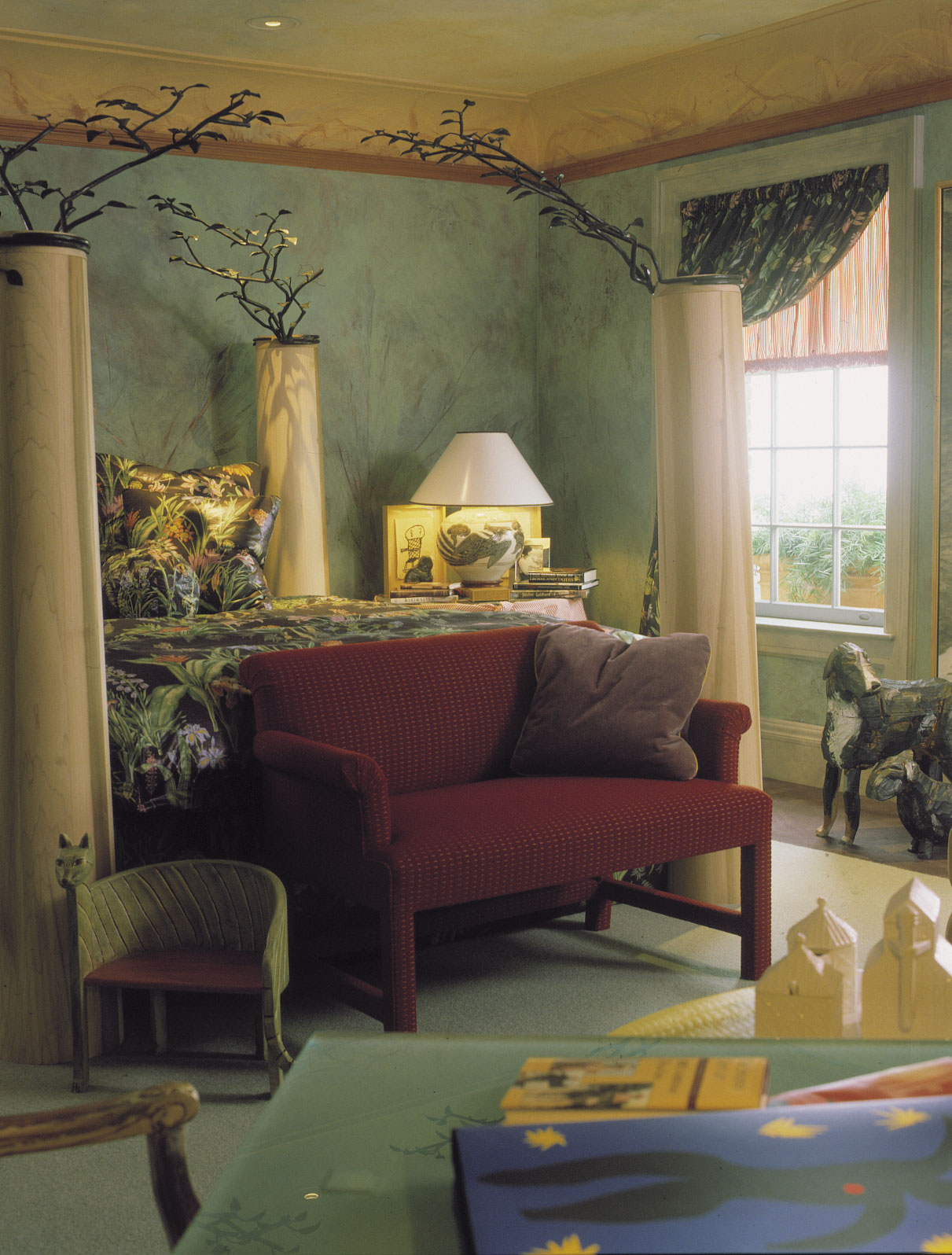 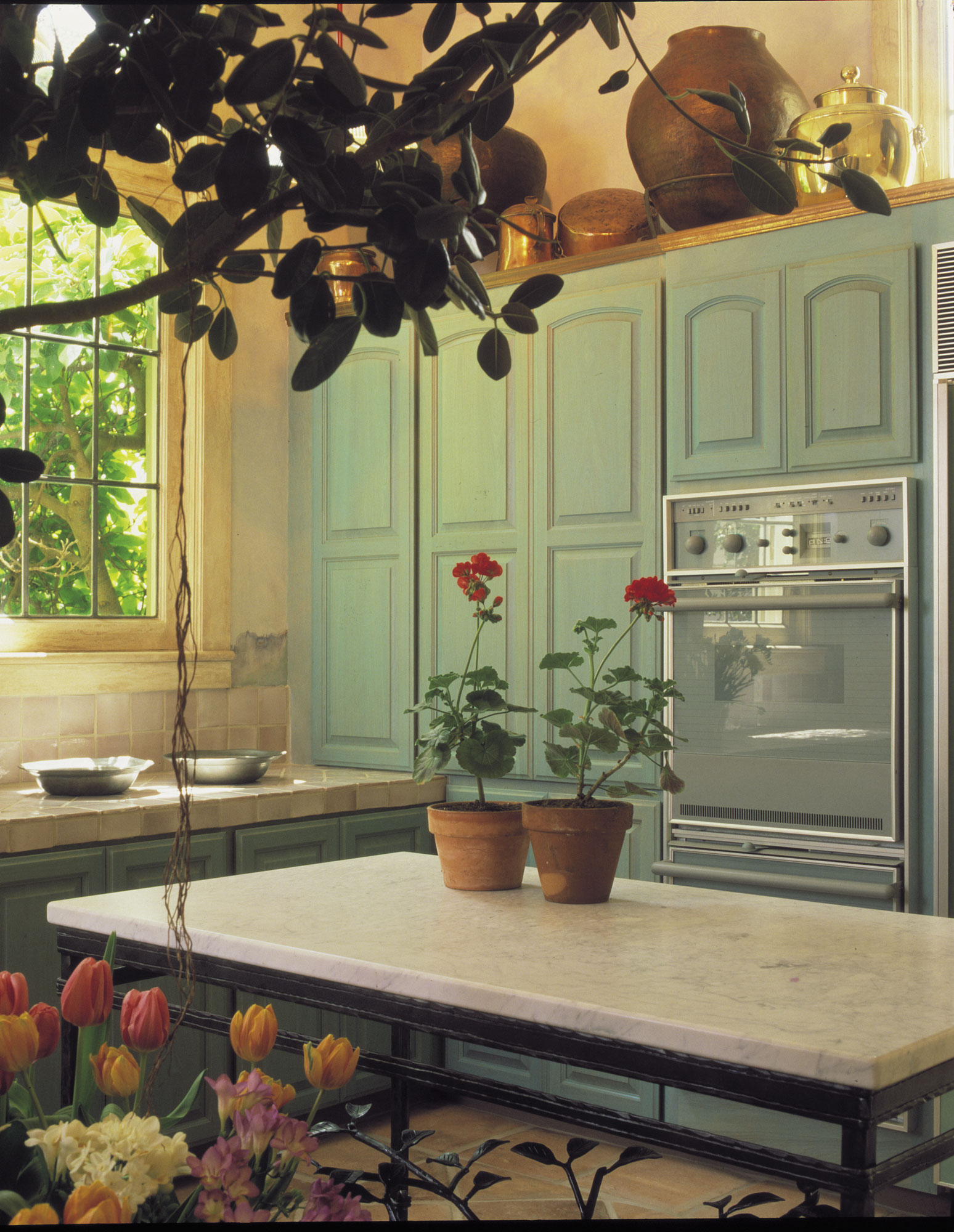 In this kitchen everything was either handmade or reused from various locations in Europe and the U.S. The floor tiles were made from the same clay source and in the same Italian village that the originals had been made 200 years prior. Marble top table by John O’Hare. 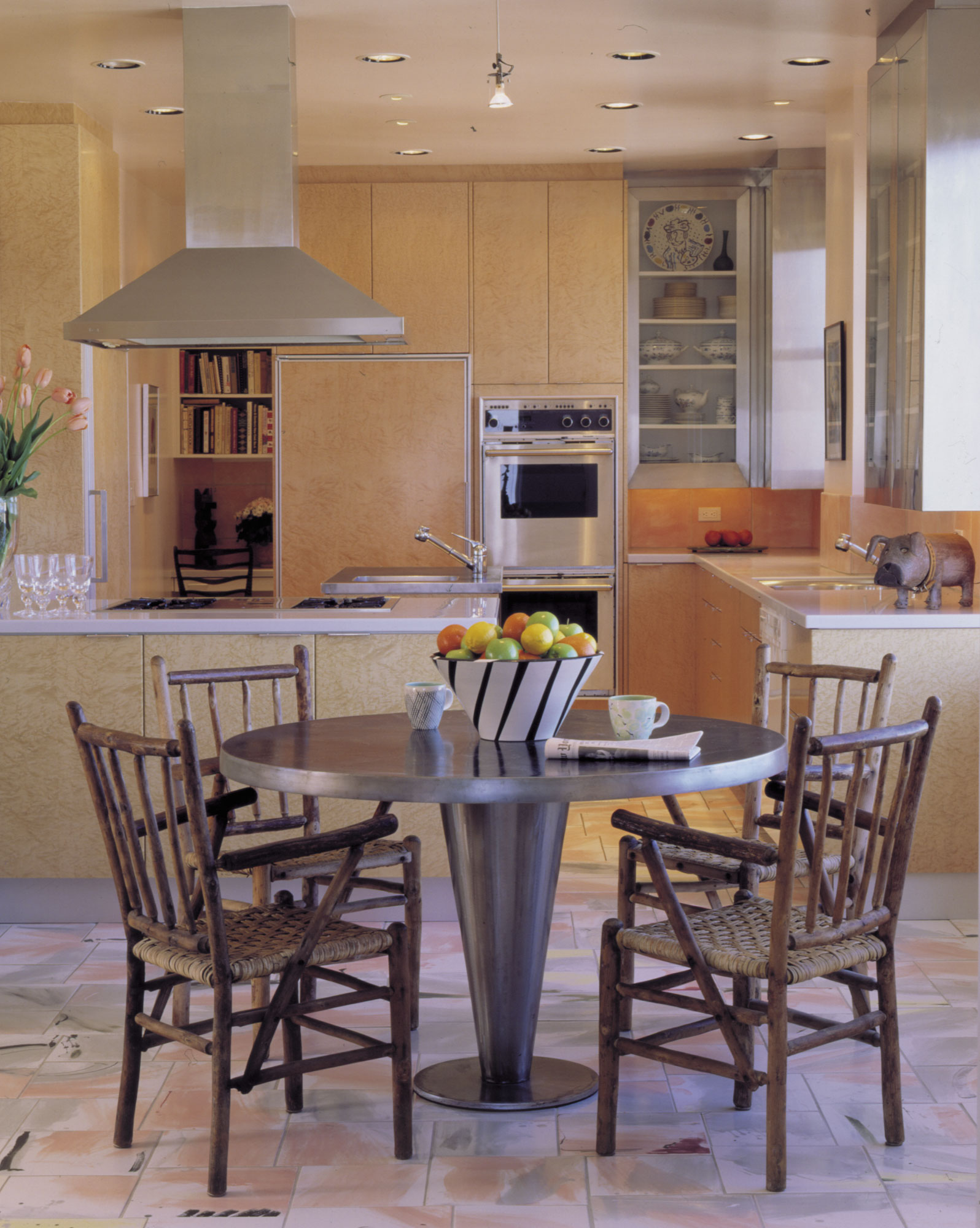 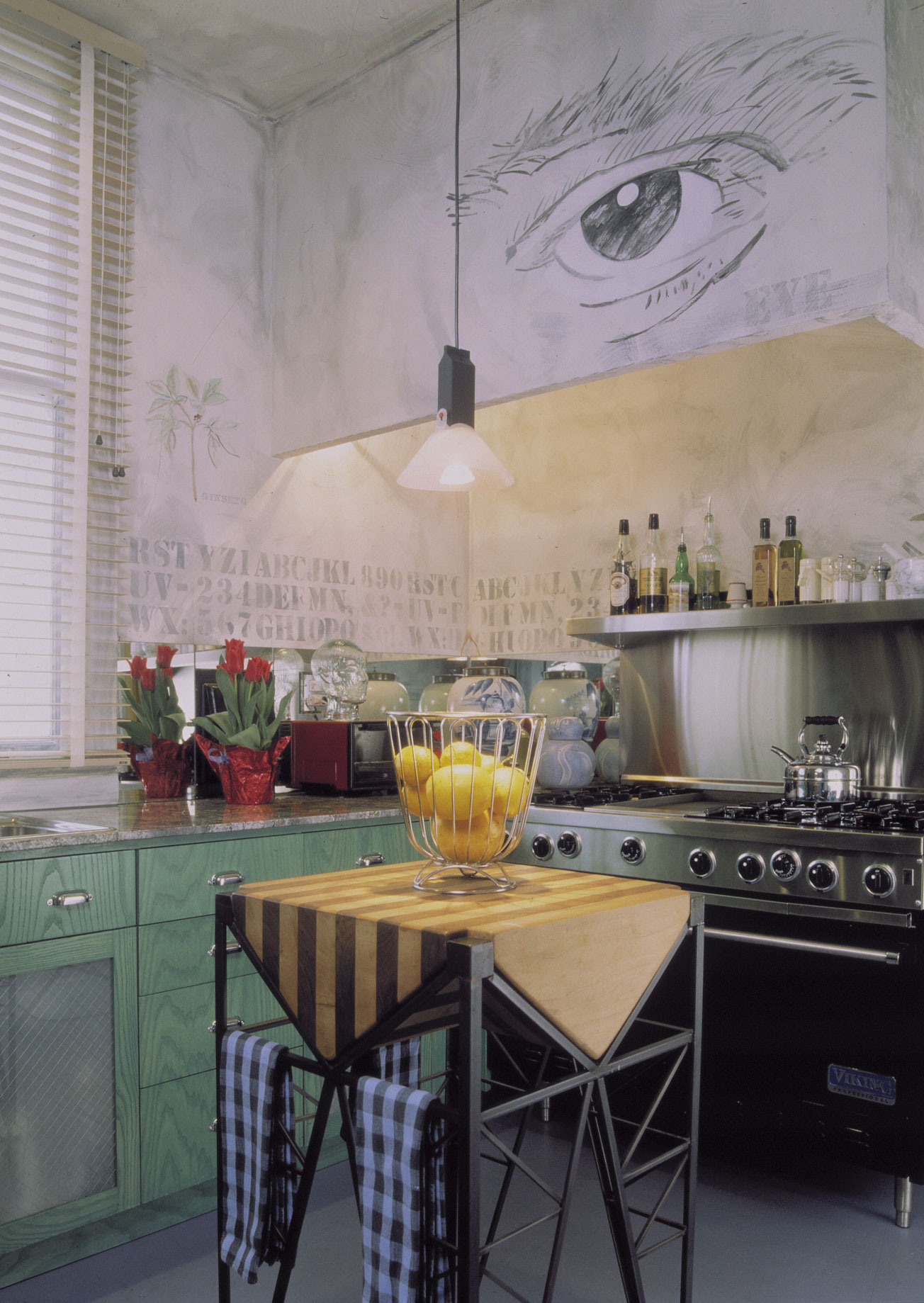 Dedicated to her optometrist husband and excellent chef, Agnes created the “Keeping an eye on the cook”, kitchen. Table by Jeff Benedetto, cabinets are Agnes’ design, painting and wall finishes by Shelley Masters. 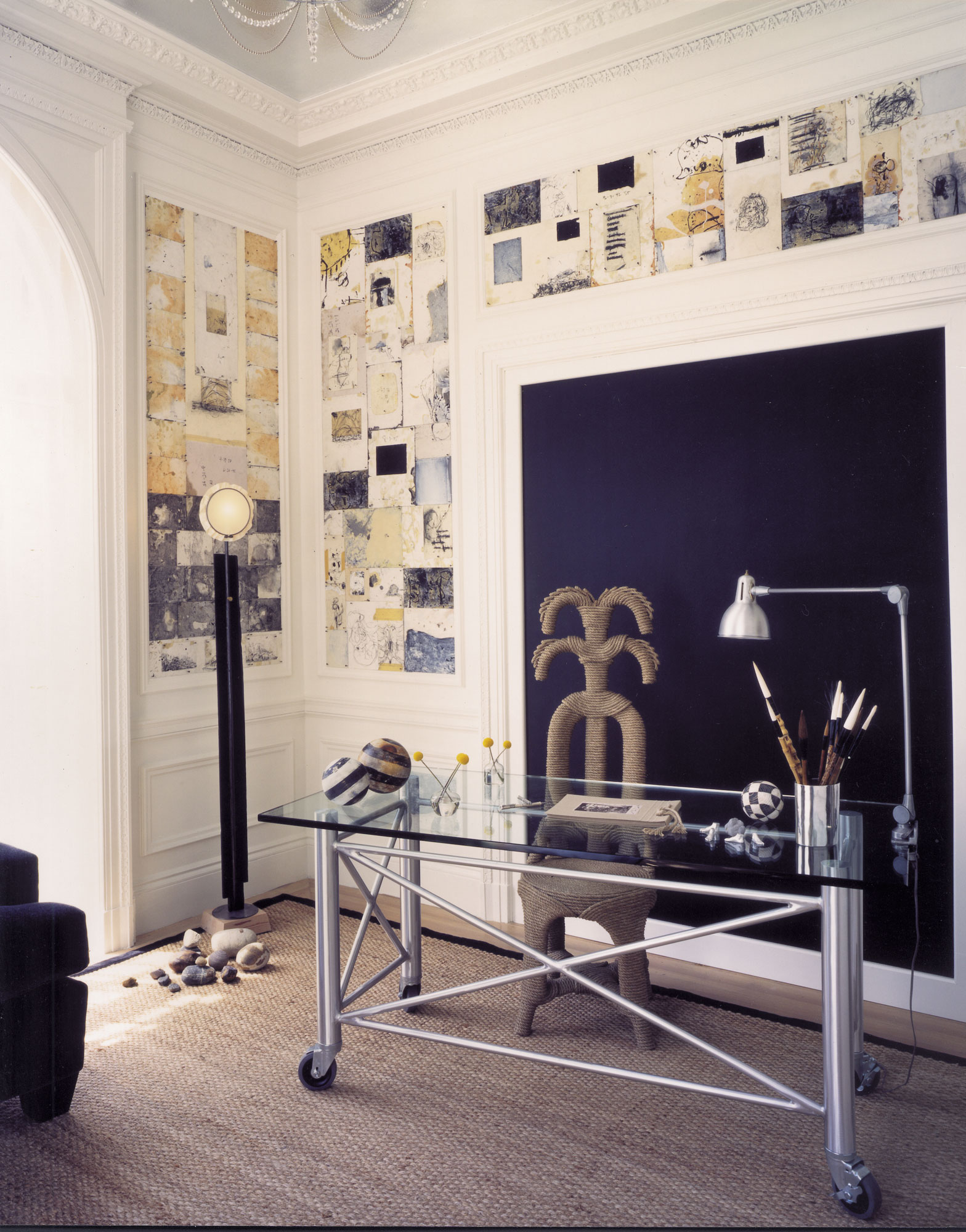 In an artful office, Agnes designed the table and light, Jeff Benedetto floor lamp, walls are “papered” with 1,500 sketches tacked carefully to the wall by San Francisco Art Institute Teacher and New York resident, Brad Brown. The black board wall makes sense and a great backdrop for the contemporary chair by French artist Christian Astuguevielle. 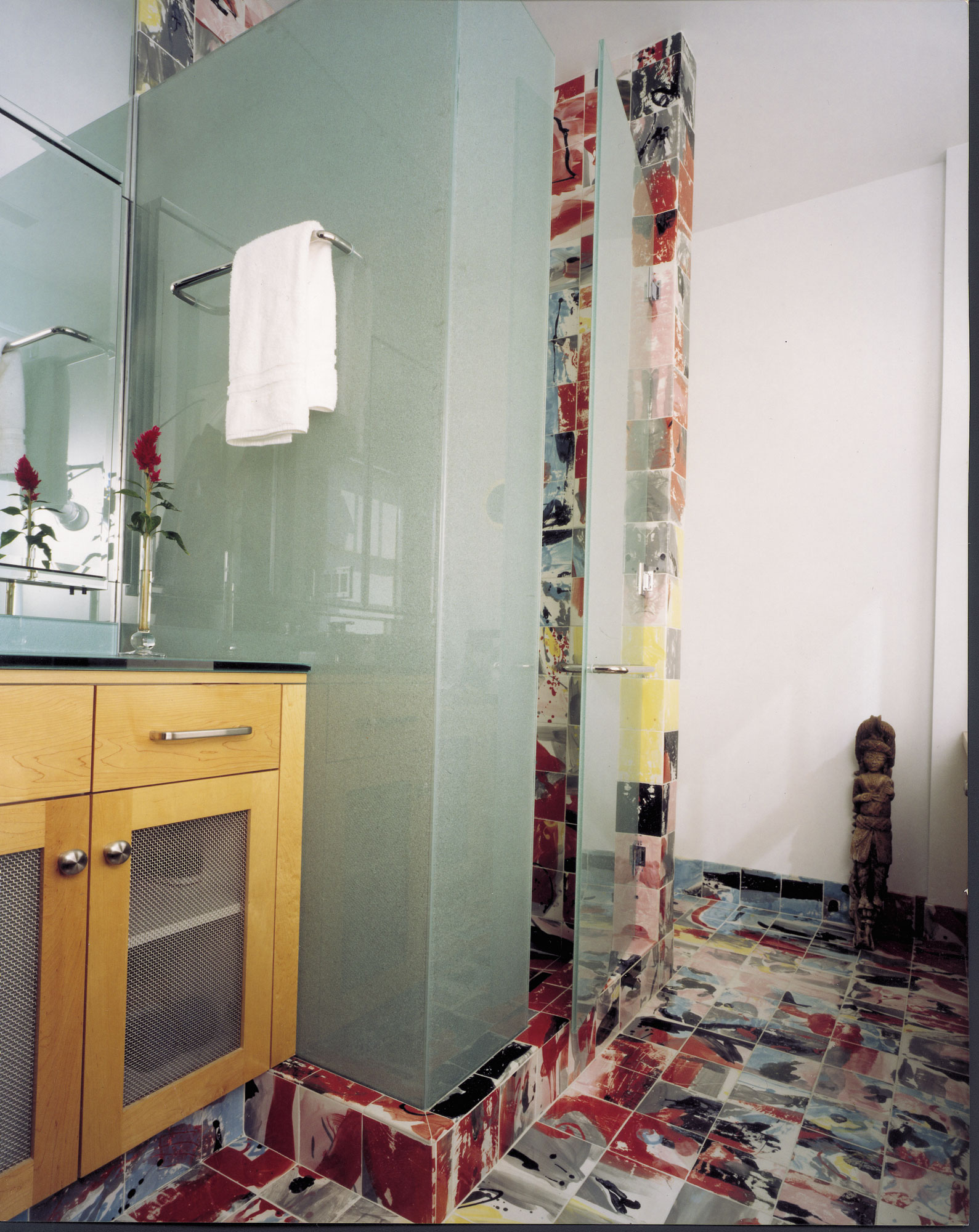 “It was exciting to give this bathroom so much art and flair. It was a tiny space,” says Agnes. The bright over glazed splash pattern tiles by Beni Strebel and etched glass give the room a bright, translucent feeling. 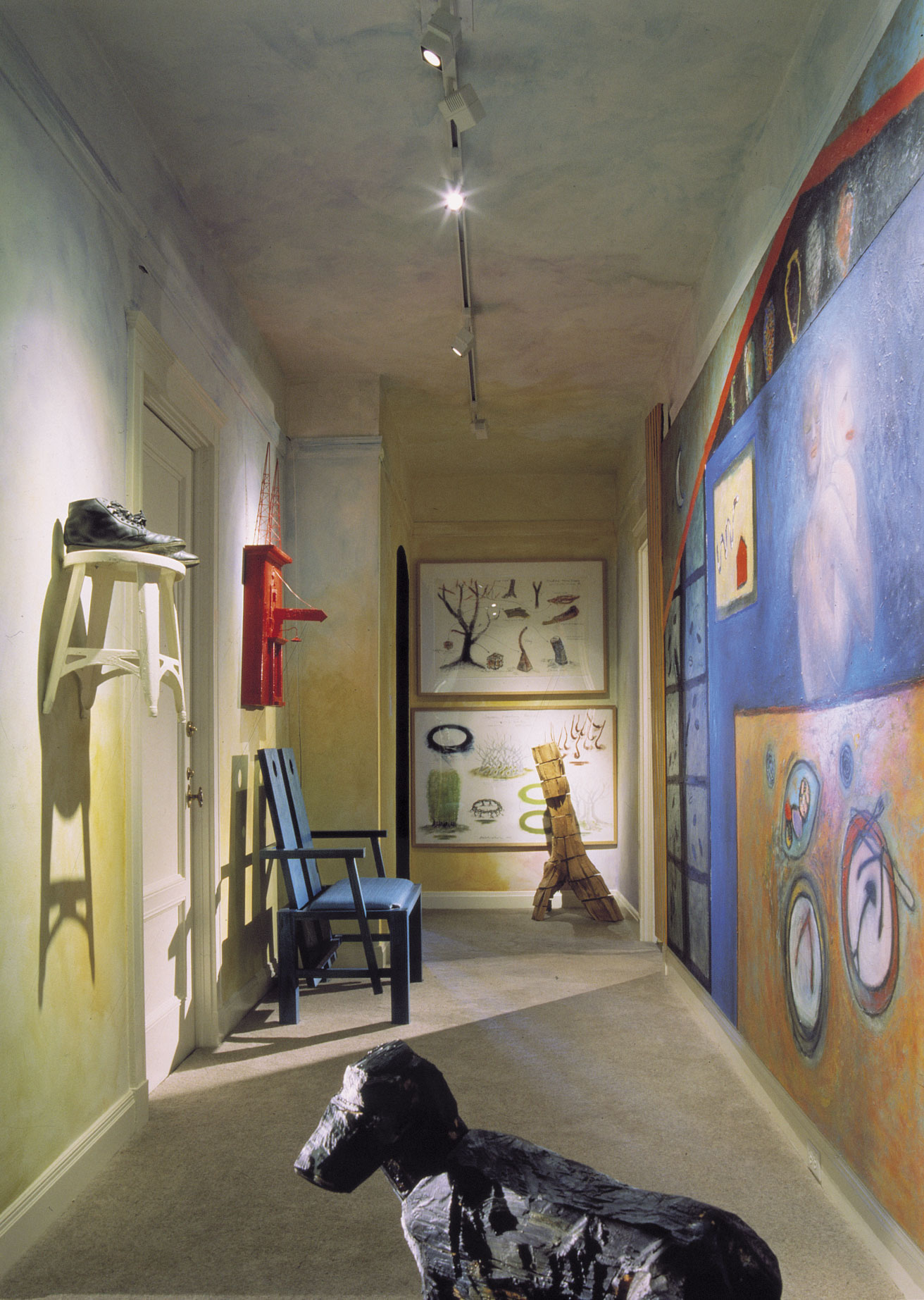 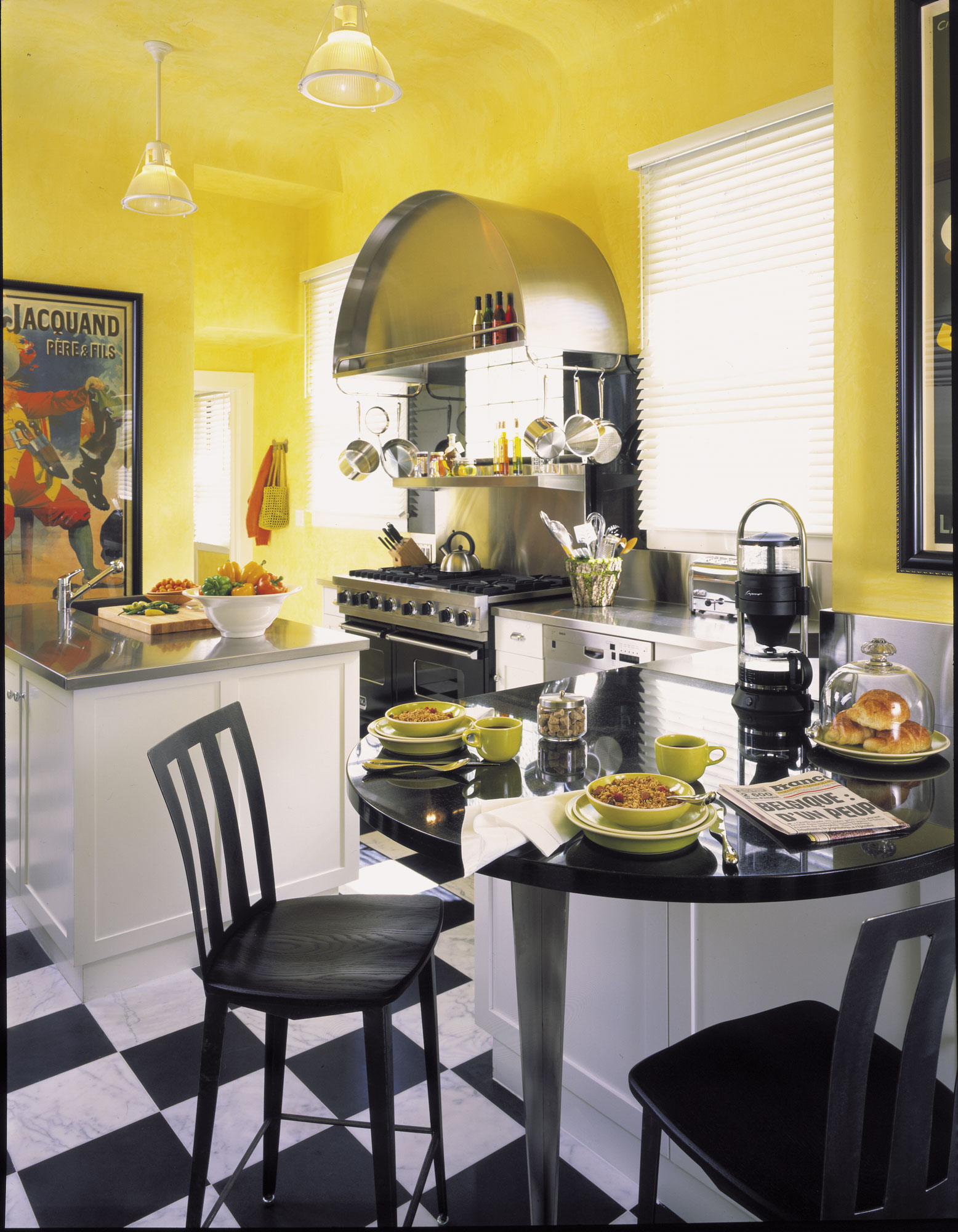