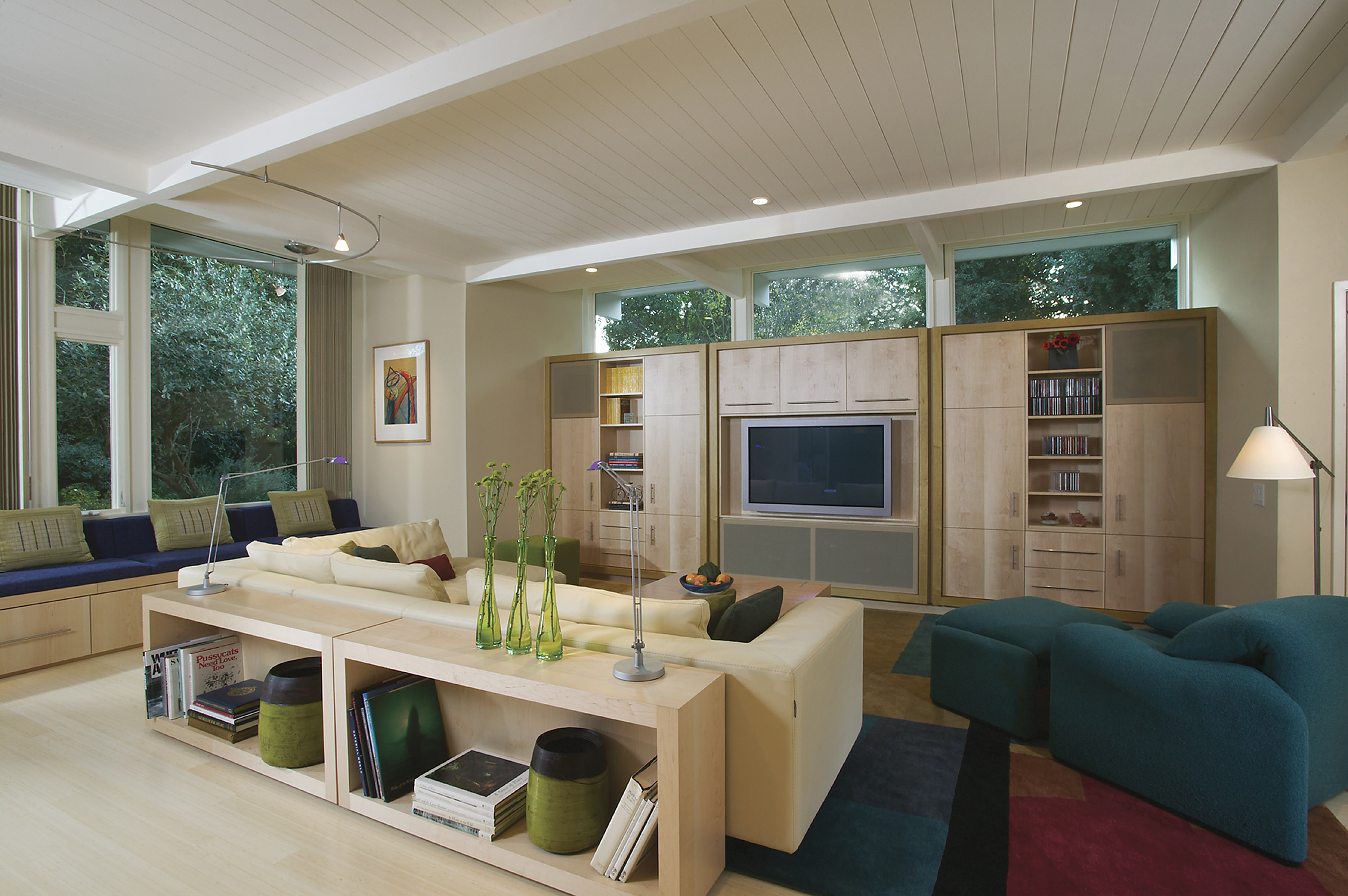 The custom entertainment center and well-organized family room at this Menlo Park home is a popular gathering spot with plenty of seating for parties. Photo: Susan Rosner

01 Sep Designing the West: Out in Front

When interior designer Pam Pennington suggested covering a client’s red brick fireplace from floor to ceiling with black slate tiles, homeowner Casey Renking was hesitant, especially since he was originally considering white limestone. But he heeded her advice, and not only did he embrace the results, so did the judges for the annual design contest for the Northern California chapter of the American Society of Interior Designers (ASID). Last year the fireplace received a Gold Award for Best Specialty.

The fireplace is bisected by a handcrafted teak mantel that extends beyond the fireplace to the left with a floating teak cabinet below. To the right of the fireplace, a matching cabinet balances the one on the other side. This simple, sophisticated room makes Renking, of Sunnyvale, California, feel content and at peace each time he steps into the environment.

Contemporary design. Craftsmanship. Sustainability. These three themes have served Pennington’s career well. To date, she has accepted 48 interior design awards, and there seems to be no end in sight to the accolades.

In the design field for 35 years, Pennington is known for her unconventional, cutting-edge sensibilities and what she calls a “warm modern” style. As the owner of Pamela Pennington Studios in Palo Alto, California, she introduces hot-off-the-showroom materials to clients years before they become commonplace. She will draw up plans for a maple table featuring aluminum inlays. Yes, aluminum. At one beach house, she ordered interior doors to be made of etched glass to allow natural light to filter through.

In working with clients, she explains, “We start from the outside in. Efficient design and space, flow and function, come before considering details, texture and furniture decoration.” Hence, Pennington is aggressive when it comes to interviewing clients in regard to how they want to live in their spaces, what things must be used and stored, how they like to entertain. “One of the pleasures of my job is to educate people to be sensitive to their environment. Everyone has to find his or her own comfort level.”

In addition, her ability to translate clients’ tastes into on-target custom carpet treatments, furnishings and cabinetry wows both customers and artisans. “She is beyond contemporary,” lauds cabinet maker Bob Nyden, who has worked with Pennington for more than 30 years. “A lot of things I build for Pam are unusual.” For one client she had Nyden construct a dining table with intricate wood inlays and a bulbous shape in the center of each squared leg. Notes Nyden, “The thing with Pam is that everything has to look aesthetically pleasing and look very cool.”

“She used to go to Italy a lot to see what is hot there,” he continues. “They [Italians] are usually two to five years ahead of us [in America]. She would reinterpret the Italian stuff, and we would do that here.”

It is safe to say Pennington has unknowingly scored many firsts and is as innovative as many of the high-tech geniuses here in Silicon Valley. In the ’80s, when Pennington owned a modern furnishings store called Minimal Space, she was the first retailer in the nation to specify using hidden cabinet hinges made in Germany. She and then-husband, architect Richard Pennington, were also among the first to offer custom closet systems, a rarity at the time. In the early part of this decade, she was the first designer to use bamboo flooring in a designer showcase house.

The interior designer has inspired and changed the lives of hundreds of Silicon Valley homeowners eager for a new look or fresh start. From venture capitalists with vacation homes to retirees downsizing to condos, customers in the Bay Area connect with Pennington’s artful touch that delights in simplicity, natural lighting and symmetry.

Because of her emphasis on clean lines and efficient space, well over 50 percent of her customers are male. “We’re not frilly,” explains the designer. “We are uncluttered, and that appeals to men.”

According to Pennington, men are more involved than ever in design choices, especially when it comes to setting up attractive entertainment systems and flat screen televisions for maximum Surround Sound and visibility. Says Pennington, when working with male clients to select materials, “it’s like they are in a candy store.” Many are engineers and fascinated with the intricacies involved with space and lighting, she adds. She delights in the changing roles men are playing in designing their homes, whether determining an ideal location for the knife drawer or choosing color palettes.

Take for instance, Mark DeMattei, the president of DeMattei Construction, one of the best-known construction companies in Silicon Valley. When it came to creating the look and feel for the beachfront family vacation home of his dreams, he hired Pennington.

The three-story, 4,000-square foot home in the low-key town of Aptos is level with the beach and features an elevator, concrete walls in the foyer and teak kitchen cabinets. Among the many intriguing aspects are the limestone floors, etched glass doors and a circular hanging shaded light fixture that emits a soft glow when illuminated.

It was this beach house that won the ASID Judges Favorite and the Gold Award in 2009. “Pam is adaptable to anyone’s style. If she sees you don’t like something, she will move on to another style without kicking and screaming,” says DeMattei.

While she enjoys contemporary styling, Pennington remains ever flexible. One client called her to create a Western theme in his new vacation home. She admits she had a blast getting up to speed on gun cabinets, “tramp art” and Western-style furnishing.

Being adaptable to different flavors of décor and budgets contributes to her stellar reputation among clients and colleagues alike.

When the Woodside, California, Stillheart Institute retreat center was remodeling and hired Pennington to oversee design, the non-profit organization hit budget snags, and could not go forward with Pennington’s original design plans. Undaunted, she continued working, adjusting to its needs.

“She was incredibly gracious about this and helpful,” says client Linda Miki Dohemann, Stillheart’s director of operations. “She got totally involved and found us things that would be more cost-effective and still beautiful. A lot of other people would be disappointed that it became a much smaller project, but she never missed a step. She gave it her heart and soul until we were complete.”

Dohemann recalls Pennington paying attention to every detail including selecting a handful of colored yarns and making sure the bundle would be the right combination for the custom carpeting. Another detail was Pennington’s idea to inlay a mosaic rectangle of white stones in the bathroom floor so that it resembled a rug next to the tub. Her touches are at once playful and beautiful.

“I always refer clients to her,” says architect Carl Hess of Square Three Design Studios in Palo Alto. “When we work together, we don’t have to go through ego struggles. With interior designers, that’s not always the case.” Hess says he has always been impressed with her creativity, choice of innovative materials and her color sense.

Pennington’s inspiration comes from a variety of sources: design trade shows, boutique hotels, showcase homes, public buildings, furniture stores. “I can have more fun in a hardware store than anybody,” she says.

During her travels, Pennington jokes that she has self-imposed “design attacks,” where she must stop to linger in front of every storefront window, interesting building, and artistically rendered bridge. “I’m constantly looking at architecture or stepping into new furniture stores. It is just obsessive.” She clips photos from design magazines. She travels with her camera and video camera at her side to grab idea samples wherever she goes. One night in New York, she recalls seeing a silhouette of trees against the sky, with leaves reflecting the light. As the sun was setting and changing the color of the sky, she took out her camera and snapped a series of photos so she could capture that moment and color palette.

After three decades in the business, Pennington has worked on every project imaginable, from tree houses to night clubs to boardrooms for captains of industry. Pennington is as zealous as ever each time she tackles a new job. “I’m constantly solving design problems in my dreams,” she says.

“I’ve been passionate about design my whole life,” she explains. In her vast warehouse office with enough samples and materials to build a house from scratch, she is thumbing through her project books filled with before-and-after makeover shots, each photo a snippet of her unbridled creativity. “Design and colors are constant in my life,” says Pennington. “There is no division.”

Award-winning journalist Kathy Chin Leong writes about interior design, travel and architecture. She is editor of www.bayareafamilytravel.com and lives in Northern California. 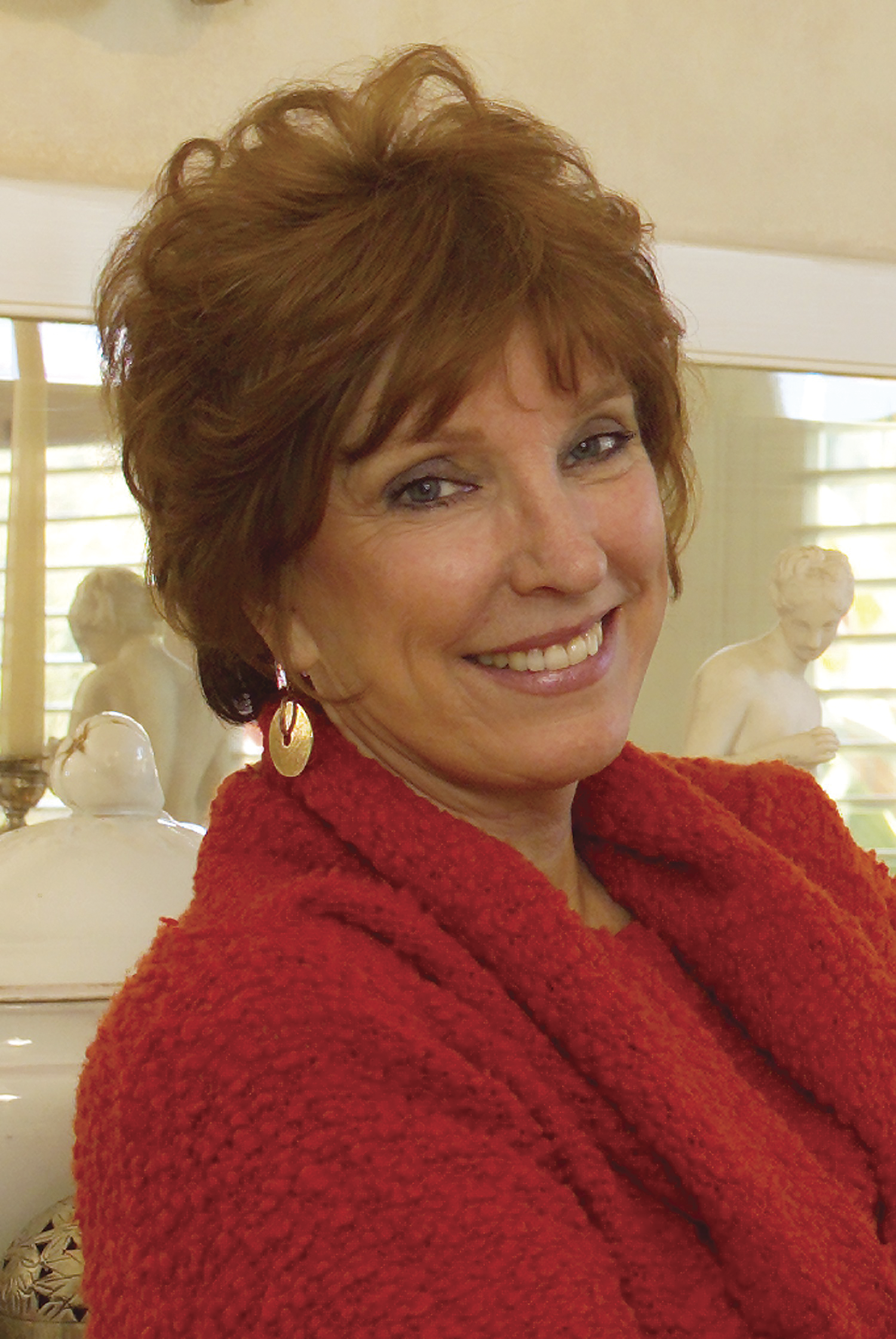 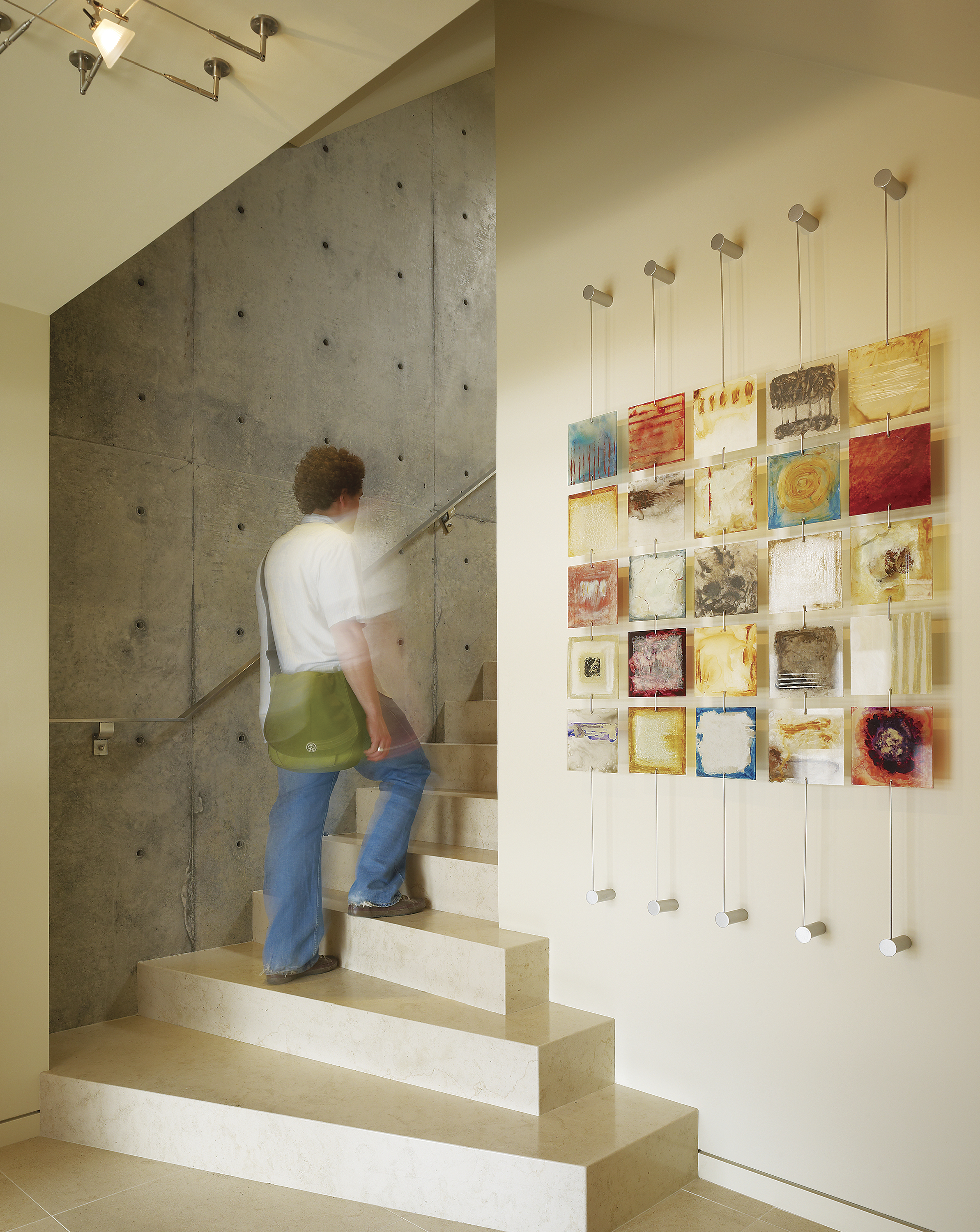 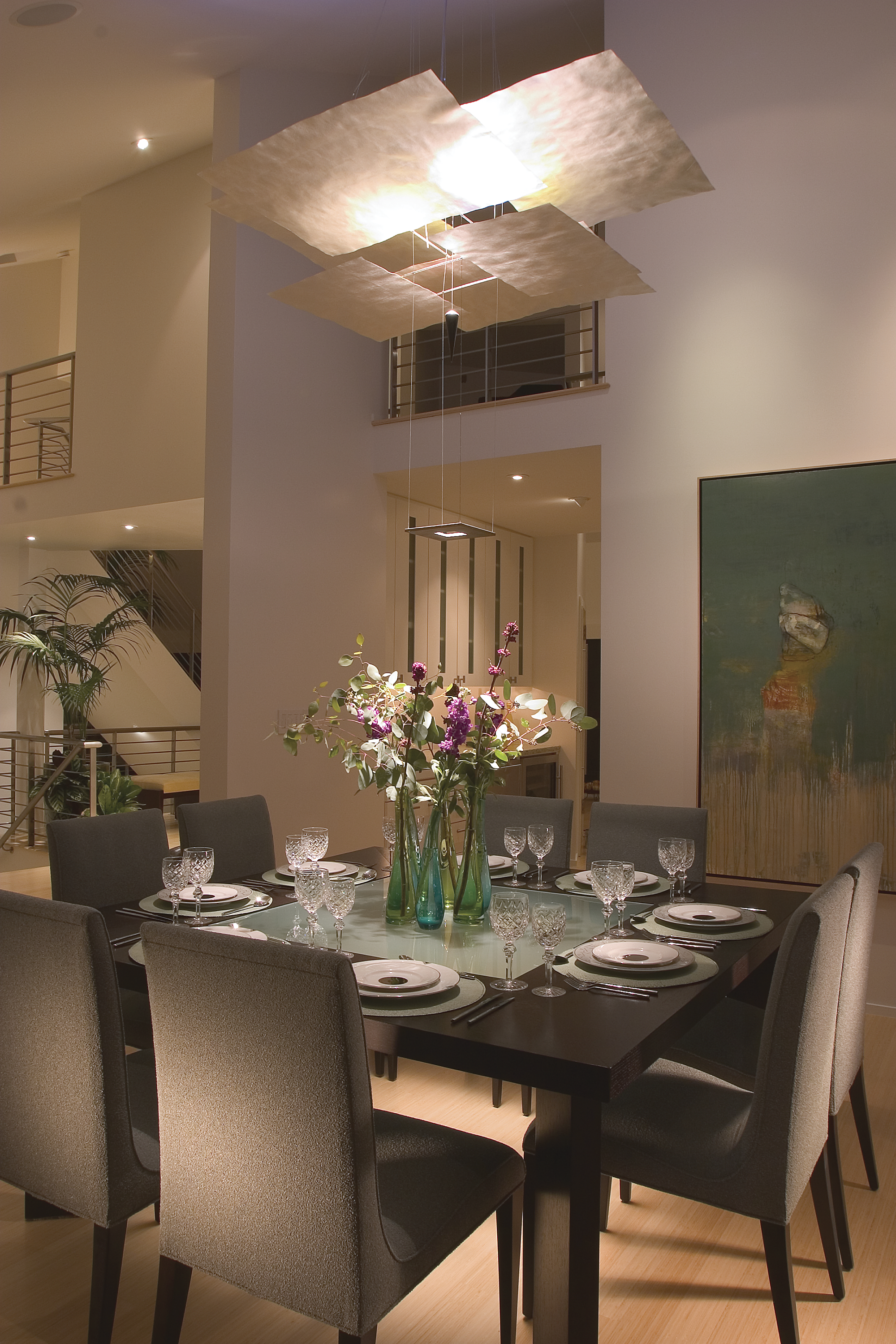 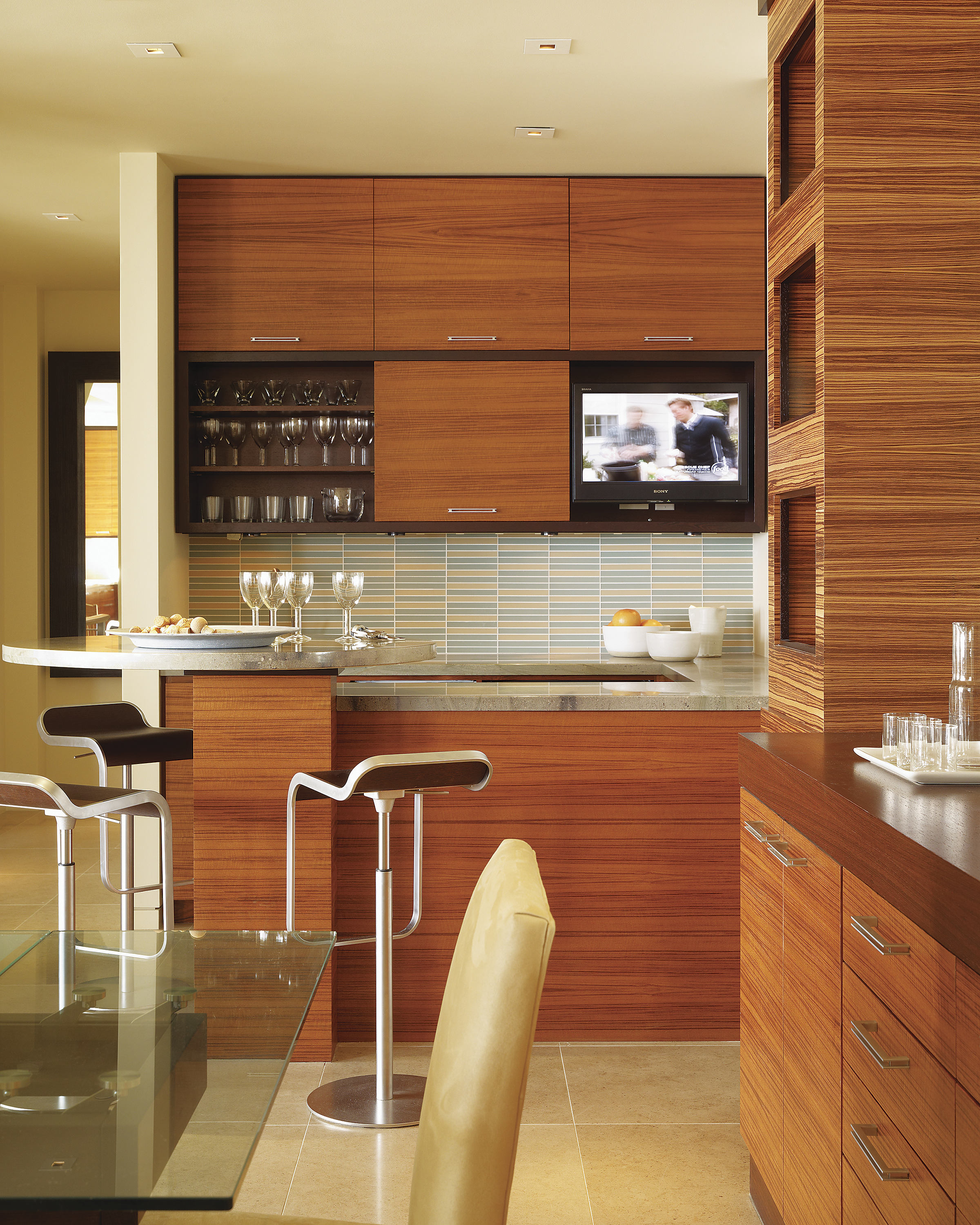 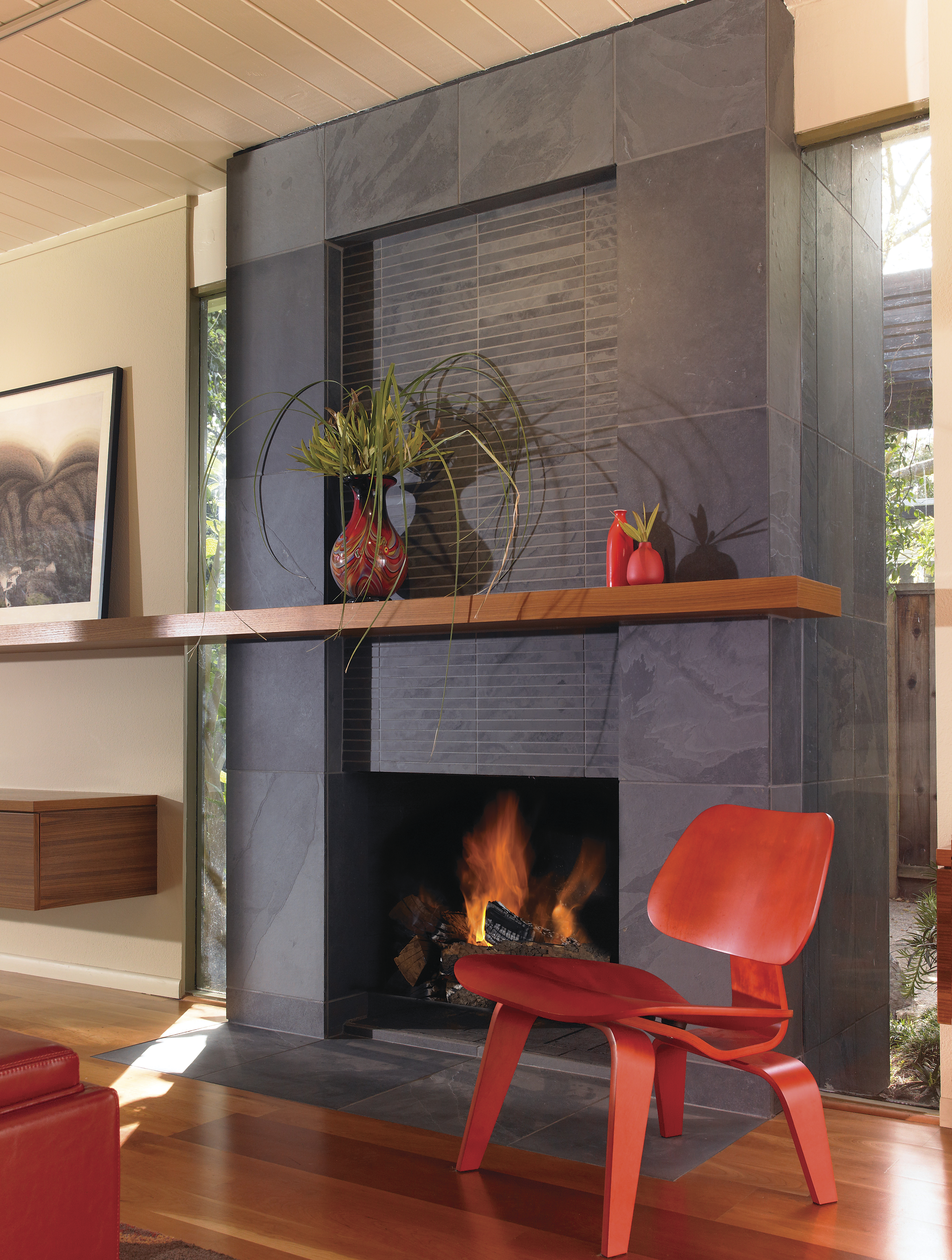 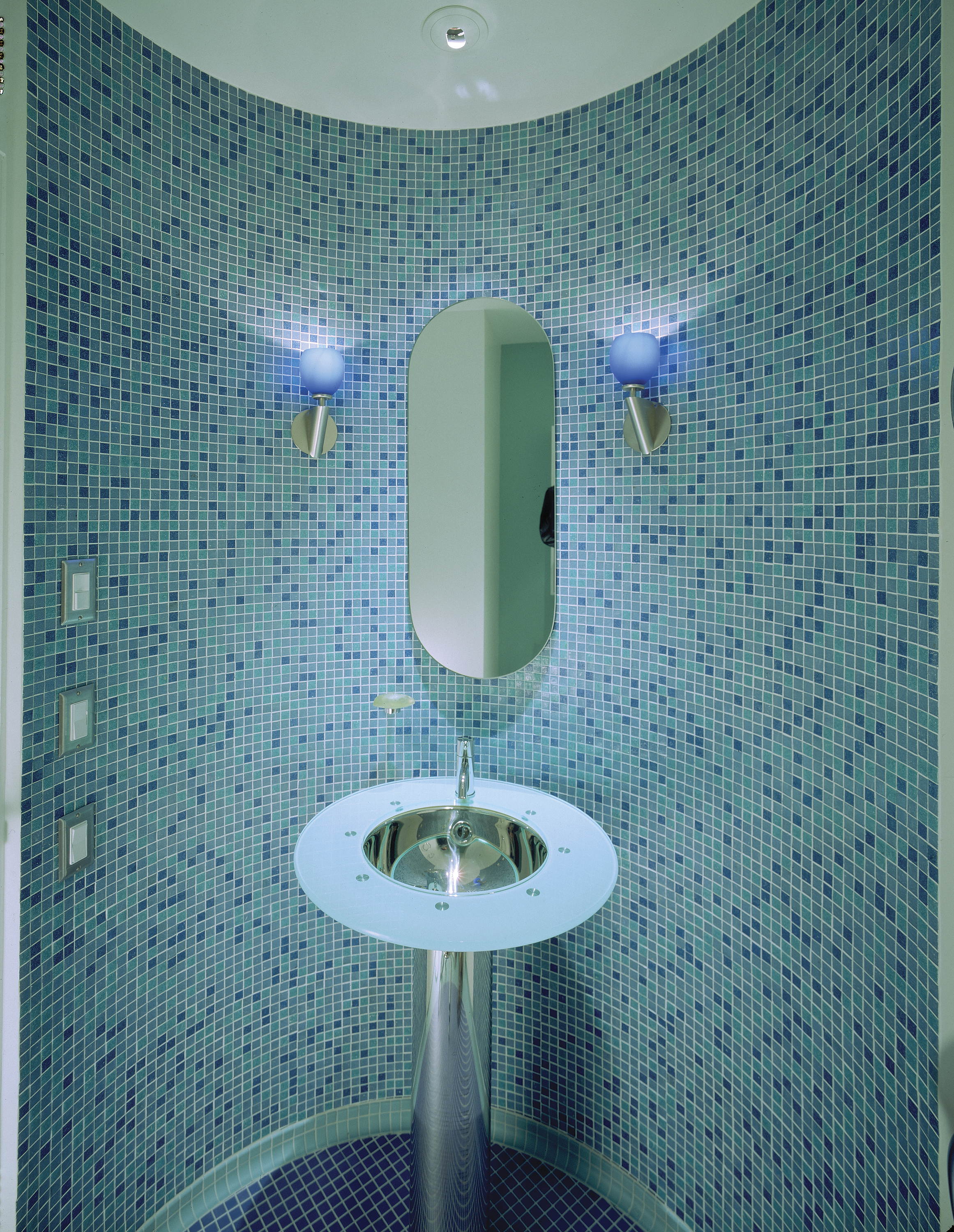 This Los Altos powder room is concave with a frosted glass sinktop that seems to light up in the daylight. Photo: Eric Zepeda 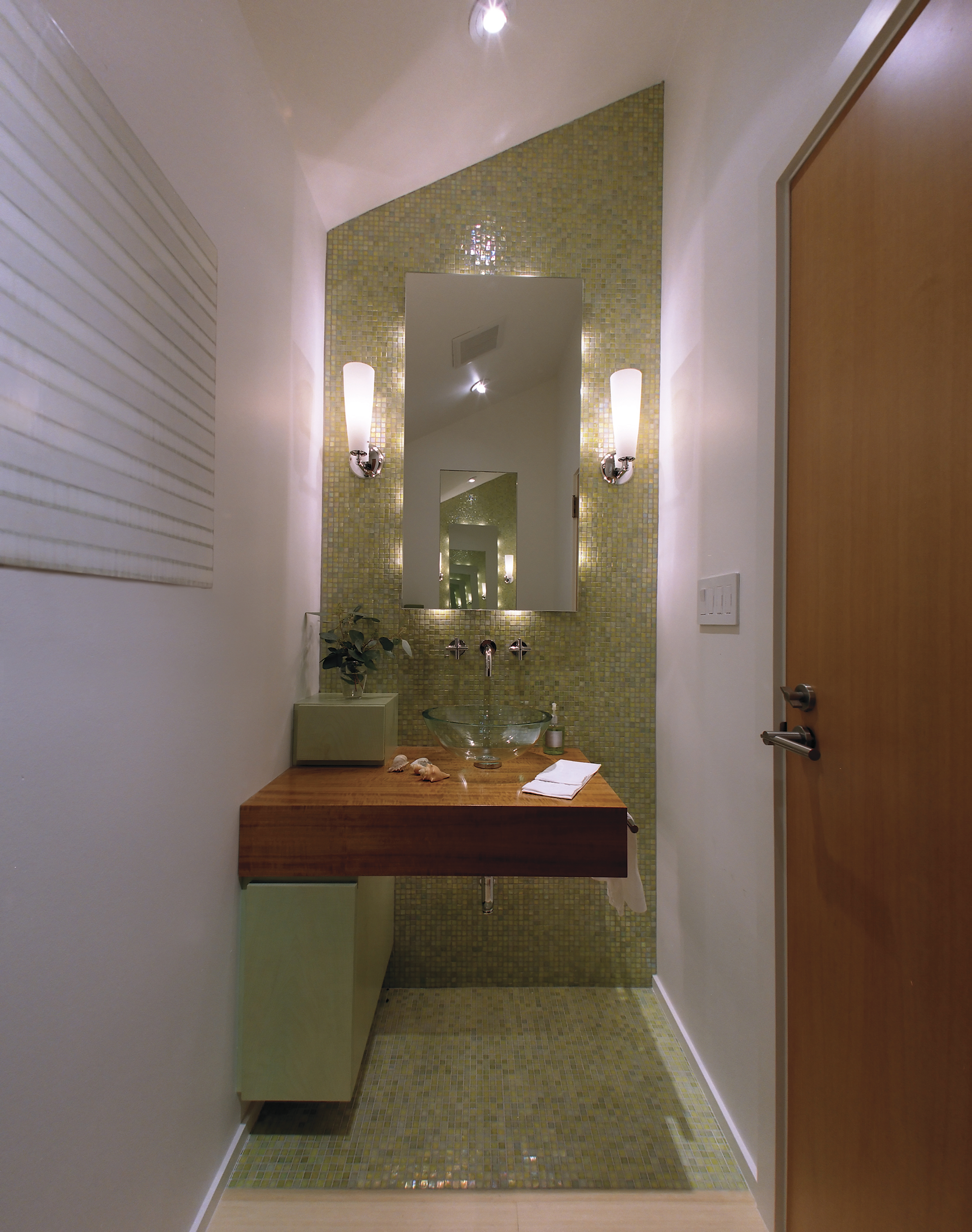 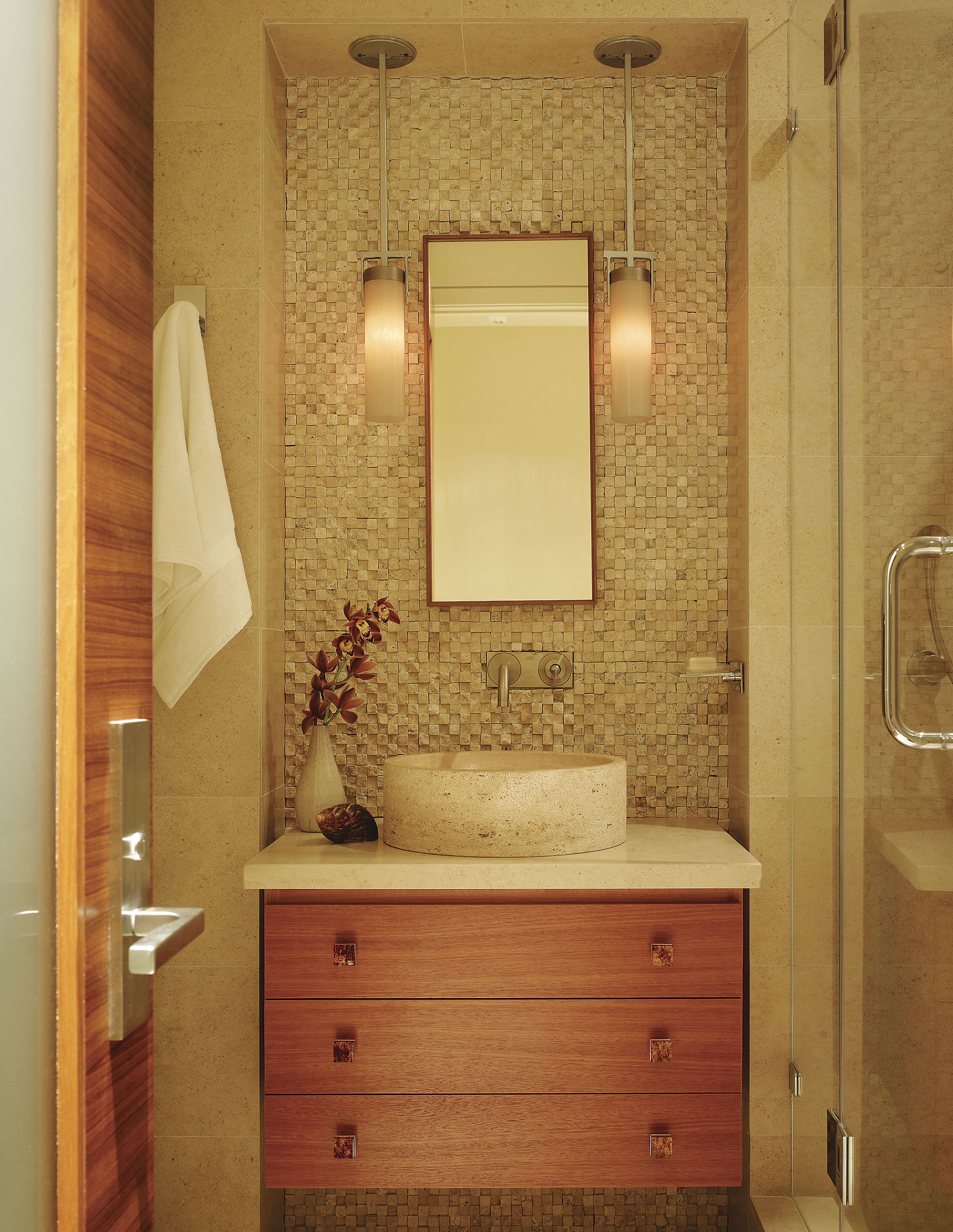