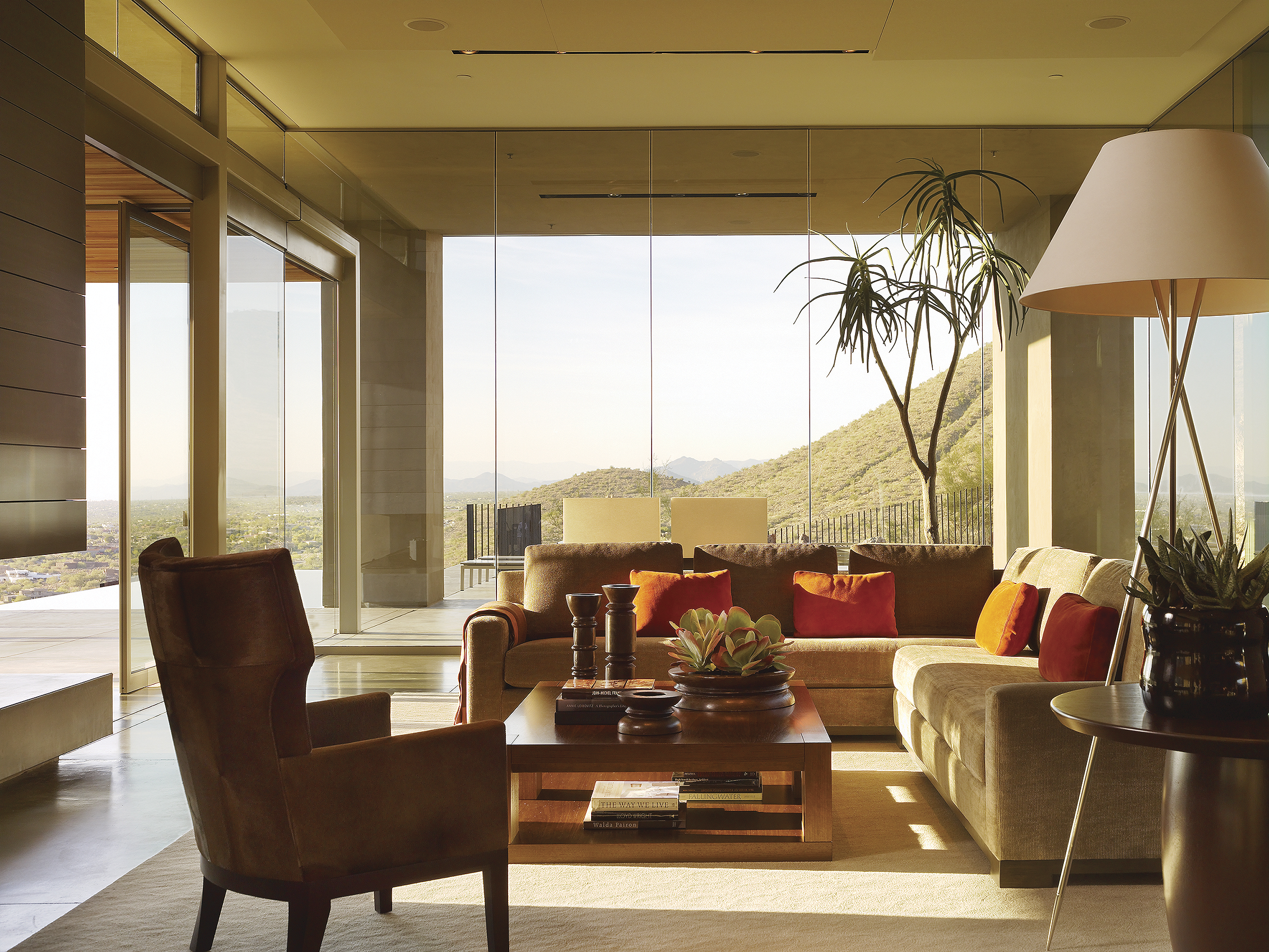 Large glass expanses create a level of spiritual intimacy with the austere beauty of the desert landscape. The “upholstered architecture” is ensconced in magical elements, beginning with layering the lighting to showcase the art collection. In the main room, the paper shades of Satori light sculptures combine with the Levitt Weaver tripod floor lamp to highlight the Gene Summers bronze collection. Photo: Matthew Millman

In the hills above northern Scottsdale, the striking contemporary home attracts the sunshine as naturally as an outcropping of rocks. At night, light radiates outward with the magic of a Chinese lantern. An awestruck visitor asked the homeowners, “Why would you ever leave to go on vacation?”

The former upstate New Yorkers had carefully contemplated if they wanted to build this one last home to be their masterpiece. Before the decision point, they called interior designer David Michael Miller. Having successfully guided multiple projects for the couple even before he opened his own design studio, Miller accompanied the pair when they selected the spectacular 13-acre site perched high in the Sonoran desert. Confident Miller understood the couples’ vision of “a home which would be part of the landscape,” Mrs. Eaton lavishes praise. “David’s attention to detail is awesome.” The admiring client describes the designer’s sense of understated elegance as so instinctual that his design of a sofa and two chairs for them is “so timeless that we were able to use them in the guest house 18 years later with very slight revision.”

Giving free reign of the interior to Miller was an easy decision. “I would never have come up with his ideas” to change the framing on the collection of traditional Western artwork. How the pieces brilliantly blend with the new contemporary surroundings is a stunning example of … why you hire a professional.”

The story of David Michael Miller growing up to be one of the most sought after designers in the American West is the quintessential American success story. It begins in a small Midwestern town of only 4,500 people. Raised in the Catholic Church, his family culture strongly valued honesty and modesty. Analytical and introspective, Miller grew up intently aware of his surroundings, observing how the undulating tonal color shifts of the windswept grassy plains of America’s heartland provoked a sense of harmony and well-being. A grin illuminates his boyishly handsome face as he remembers his first experience designing a dwelling: a tree house made from parts harvested from a scrap bin.

Miller’s formal training started when he headed to downtown Chicago to study interior design at Ray College. Well known for training interior designers in an art school atmosphere, Miller describes the setting as “integral to my exploration into the broad landscape of interior design.”

It was during his first year at Ray College that he read Frank Lloyd Wright: An Autobiography. The tome resonated with the young man. Wright’s religious upbringing in the same part of Wisconsin as his own produced a parallel understanding of nature’s reverent relationship to architecture. Miller adopted the creed, “Truth in materials.” As the iconic architect identified himself as an independent thinker and non-conformist, Miller proudly carried on in Wright’s footsteps.

Upon graduation, Miller headed west, intrigued by “Wright’s romantic writings of the desert Southwest, its warm climate and frontier qualities.” He envisioned the region as “the land of opportunity.” Miller intended to study at Taliesin, The Frank Lloyd Wright School of Architecture. Mrs. Wright personally invited him to join the fellowship in 1983.

Independent, self-directed and energetic, the young designer formed David Michael Miller Associates of Scottsdale, Arizona, in 1989. As sole owner and lead designer, Miller is renowned for fusing architectural context with geographical/cultural influences to blend with his clients’ style and sensibilities.

Art Jordan, AIA and vice president of project development for Linthicum, a world-class construction company, explains the designer’s genius as a product of Miller’s “keen eye for composition and color … enhanced by his highly measured restraint in maintaining simplicity in his designs. His work is precise.”

His career arc ever ascending, Miller is philosophically pleased with his journey and his evolutionary role in residential interior design in the western United States. The Arizona desert is “a great fit (for my) instinctual inclinations toward natural material and the western lifestyle of living in connection to nature. The wide open spaces and open air of the desert Southwest remain a confluence of creativity in architecture and interiors.”

Miller ascribes the success of his design studio “to the truly democratic nature of the West, as a frontier that supports innovative people who wish to explore new territories in design and architecture.”

Southern Californian Lydia Plunk is a former planning commissioner and newspaper editor. Passionate about the Great American West and dedicated to the uplifting truth of authentic beauty, the FIDM graduate experiences daily grace as a freelance writer. Visitors are welcome at her Internet portfolio, www.lydiaplunk.com, and her blog, www.averygoodlife.blogspot.com. 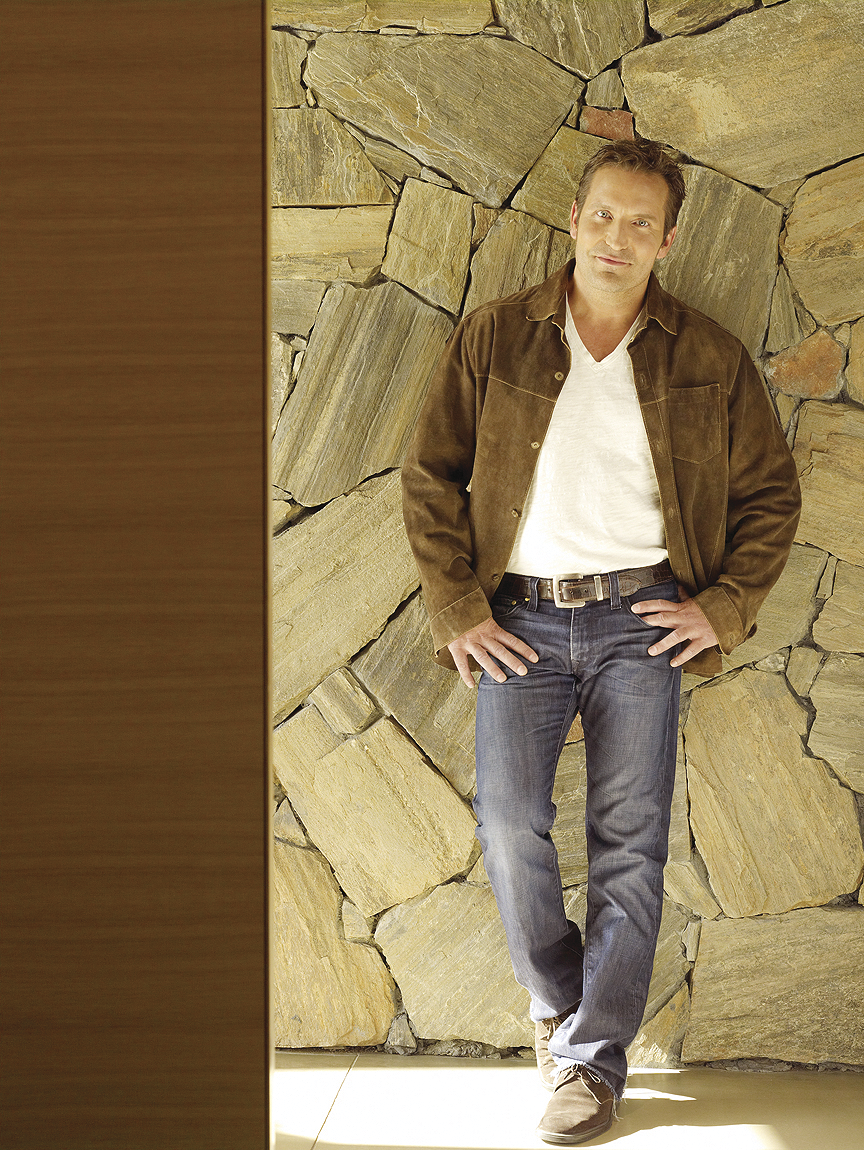 Painted on wood in an egg-tempera medium, artist David Kroll’s koi glow with realistic luminosity. Hung over the antique English pine cabinet on which a row of terra cotta planters is arranged, the restful illusion is that of looking down into a pond. Photo: Bill Timmerman 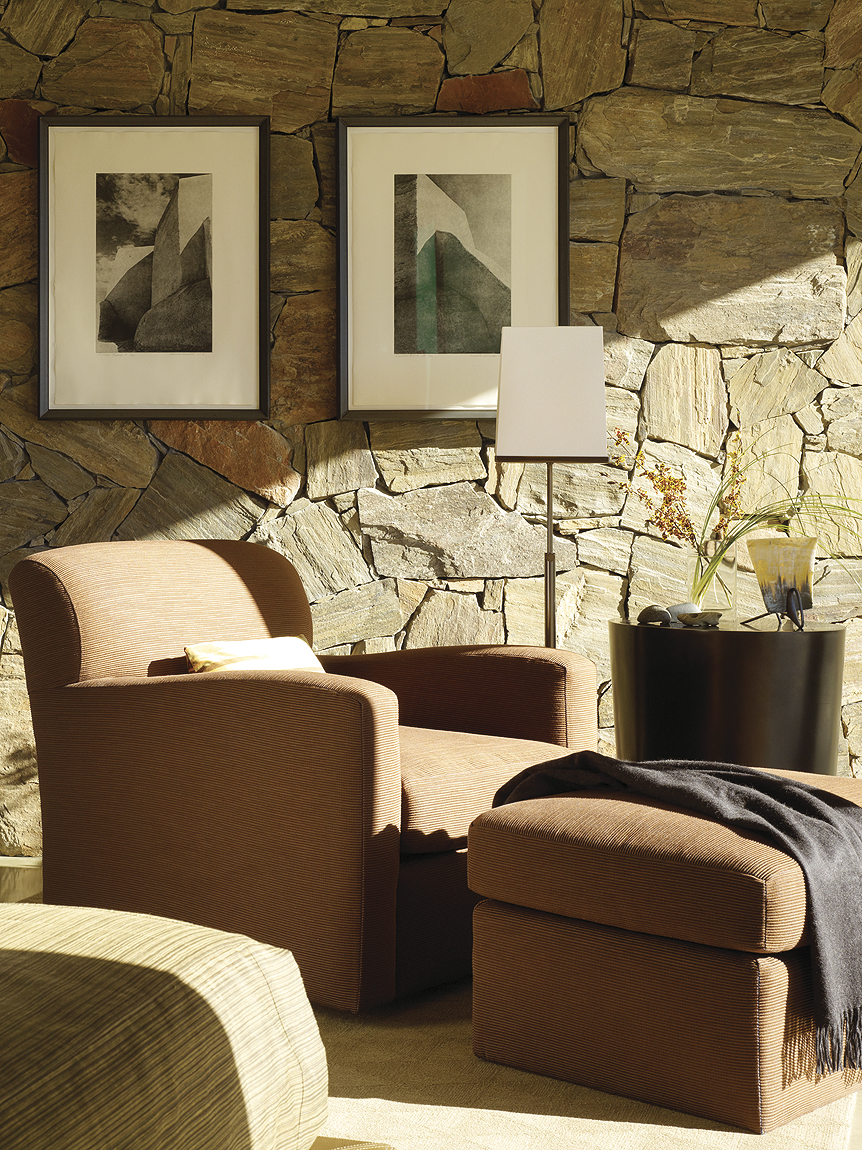 Arizona fieldstone in three colorations visually plays off each other. Vintage Ranchos de Taos etchings are so timeless that a simple change of framing made the pieces at home in the contemporary residence. Photo: Matthew Millman

To bring this 1930s former vacation home up to date from an Andalusia-Pueblo fusion influence to a style David calls Sonoran Cottage, excessive detailing was pared away to reveal the architecture’s sculptural qualities. Photo: Bill Timmerman

Throughout the renovation, white oak planks were hand scraped and pickled. Laid in a banded herringbone pattern, they demonstrate how well rustic and refined styles can marry. Photo: Bill Timmerman 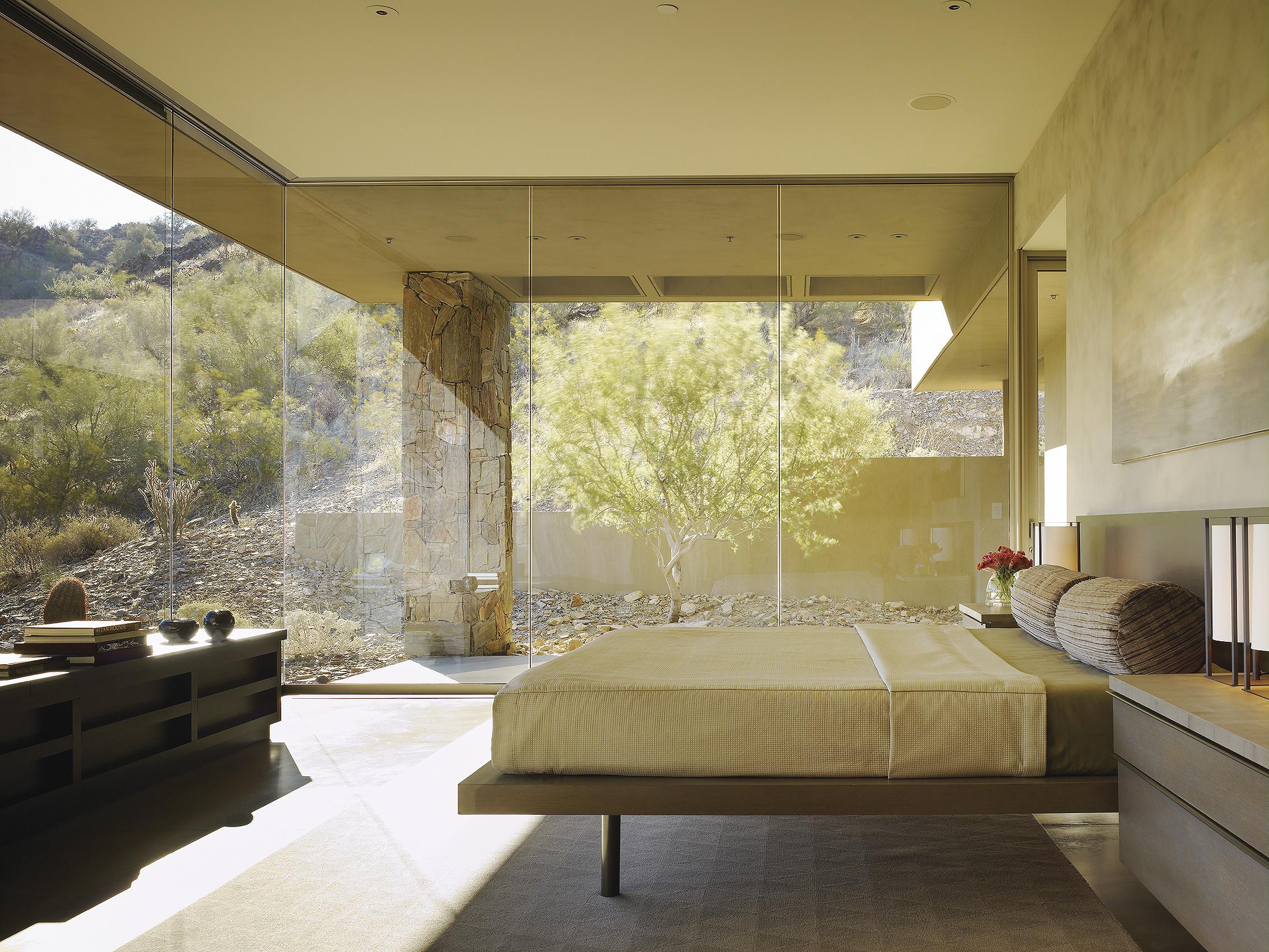 When comfort or privacy requires separation from the outdoors, hidden shades and shutters appear from unseen positioning. Likewise, on command from the bookshelf opposite the bed, a TV rises from below grade for viewing pleasure. Photo: Matthew Millman