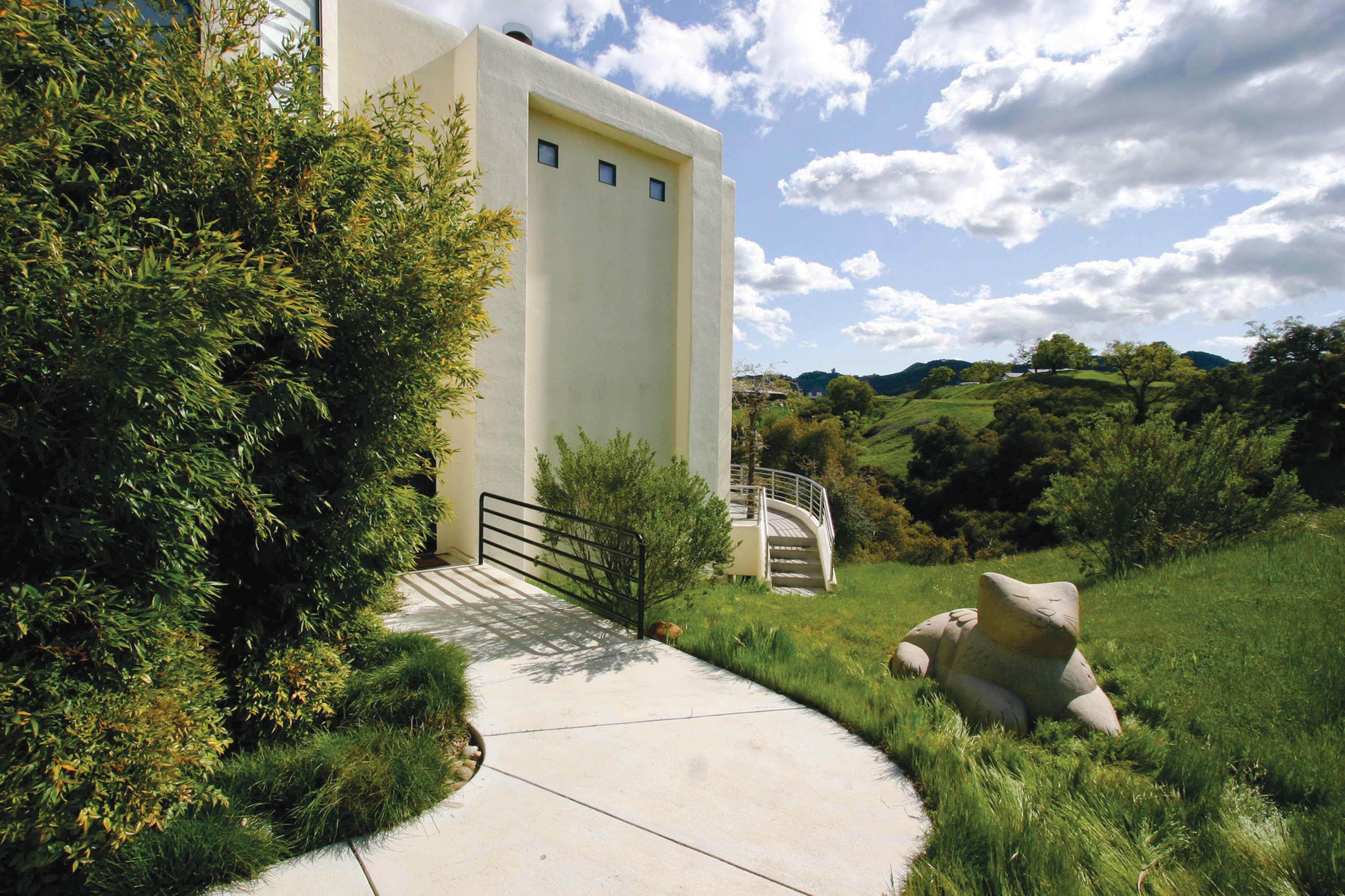 Guarding the entry to the iverson home in Paso robles, california, is Paula Zima’s 3- by 5-foot grinning fat cat sculpture.

Guarding Jon Iverson and Corrina Jones’ custom home near Paso Robles, California, is a grinning fat cat, a larger-than-life sculpture carved with wings so magical you’d think it flies when they are not looking. Created by artist Paula Zima, the tan feline surely puts guests in a frolicking mood before they get to the front door. Iverson says he has been collecting her etchings and sculptures since the 1980s. “We love the hope that her work offers,” he explains. “Her sculptures are simple, beautiful and above all, friendly.”

So, dear collector, is your lineup of artwork getting a little, shall we say, stale or dull? Perhaps adding a funny piece to your repertoire could spice things up a bit. No, you don’t have to buy the poker-play- ing-dogs-on-velvet paintings, and you don’t have to worry that your tastes will veer into the realms of tacky or kitschy. You may be surprised to learn that humorous art exists in the cowboy, Native American and many other revered genres in the past and present.

And who doesn’t like to laugh or smile? Last July, Ma(i)sonry and sister gallery, I. Wolk Gallery, both in the Napa Valley, hosted an exhibition called Seriously … and featured several artists who create works with touches of wit and humor.

According to gallery director Karen Johnston, she came up with the novel idea because it was “a difficult time in the world. The economy was unstable, there were violent uprisings and protests throughout the world and it was also an election year.” The successful exhibit took the “edge off” an otherwise intense time for many. A hosted wine reception celebrating the humor exhibit gave the public a temporary reprieve from the world’s burdens and the opportunity to laugh and grin.

And even at the Heard Museum of Native Cultures and Art, Diana Pardue, curator of collections at the Phoenix, Arizona, location says the staff has discussed the possibility of one day doing an exhibit on humor in American

According to Amy Scott, a curator at the Autry National Center of Los Angeles, humor has a purpose in any collection. The Autry museum exhibits select works from artists who use serious themes and address them in a playful way. Contemporary New Mexican Santero artist Luis Tapia, she notes, takes Old World Catholic religious imagery and sets them in today’s culture. In one Tapia painting, a Chicano low rider is featured with a sacred heart on the steering wheel. “You can see how the artist takes something serious and very personal and brings it into contemporary life, and you can see how it can come into a conversation,” says Scott.

Meanwhile, historical Western art traditionally addresses sober themes, but it is generally about optimism and transformation of the West, Scott says. “Humor speaks to the lighter side of the Western experience in addition to the epic moments.”

Many experts, including Scott, point to prolific 19th-century cowboy artists Charlie Russell and Frederic Remington, who depicted life on the range, together with its mishaps and follies. In one famous Russell 1908 watercolor, Bronc to Breakfast, a horse and his rider crash into a cowboys’ campfire breakfast, pots and pans flying every which way. Russell was also known as a humorous storyteller who would carve small wax sculptures behind his back.

According to Michael Duty, former director of the Eiteljorg Museum, Charlie Russell enjoyed creating mirthful pieces as an eyewitness to the things happening on the plains. “Life is not just about gunfights and stagecoaches and Indian battles.

There was a lot of bunkhouse humor.”

In spite of the conflict and tragedy that shaped the West, the vicissitudes of daily life offered plenty of ironic and silly situations to paint and sculpt. Says Scott, “As a collector, you may not want to have only super-serious historical pieces. Our lives are not lived that way. You can collect pieces that inject humor with irony and levity, and still respect the tradition that the West was rooted in.”

You can find artwork that runs the gamut from subtle, tongue-in-cheek sketches to blatantly laugh-out-loud sculptures. Some pieces are titled in a humorous way, such as the George Bumann bronze of a boy with his head pressed against that of a Labrador, called, Mind Meld. The joy lies in the title in addition to the sculpture.

Respected Western artist Debra Butterfield will sculpt horses in bronze, but the resulting patina looks like wood, surprising people with the unexpected. Meanwhile, Kim Wiggins takes audiences’
eyeballs on a bronco-bustin’ romp through the West in paintings that vibrate with electrified colors and swirls that have a Dr. Seuss-like quality among the wiggly landscapes and rubbery buildings.

While the Butterfield and Wiggins works elicit “oohs” and “aahs,” Esther Shimazu’s pieces often get a “wow” or a “whoa.” At the NaPua Gallery at Grand Wailea Resort in Maui, Hawaii, amid large-scale oil paintings and delicate Dale Chihuly hand-blown glass bowls, ceramic chubby, bald, naked Japanese women proudly share the space. All tabletop sized, the older ladies, created by ceramicist  Shimazu of Honolulu, are unabashedly grinning as if teasing onlookers with their nudity. Says the artist, “I have a big family, and I’m one of six kids with a bunch of cousins. I come from a line of funny people.”

While the pieces are hilarious, NaPua gallery director and corporate curator Michael Gilbert takes Shimazu’s work seriously. Her work, after all, is made of quality craftsmanship. “Great art, and I truly mean that, will extol a direct and immediate response,” he explains. “Great art is also not always easy and requires viewers to change their scope and parameters, even their social values.” Nothing is wrong with making one blush, he adds.

Shimazu’s work, on the surface, seems whimsical and fun, and “stops you dead in your tracks,” he says. “The viewer can just leave it just at that and bask in its radiance. I always consult new collectors to look for pieces that will always evoke conversations and shake up their guests. Just owning one (of Shimazu’s sculptures) is fun and something you will never tire of.”

Over in New Mexico, accomplished artist Kathleen Wall, from Jemez Pueblo, delights clientele with her young koshari clowns posed standing up, lying down or sitting on a shelf. Made of local clay she makes and sifts herself, each koshari has a distinct characteristic with either a mischievous or irresistibly cute expression. People who see her work cannot help but grin as the clowns’ broad smiles seem to resemble the attractive smiles of Wall and her children. While she is skilled in other media and sculptures, Wall is celebrated for her unique koshari clowns that exude joy and happiness.

Ron Lushing, a collector who splits his time between Santa Fe and Los Angeles, jokes, “Over the years, we bought too many things from Kathleen (at least a dozen), and she told us she has to ban us from buying any more! That tells you how we have liked them. They are all whimsical and fun, and you immediately smile.” Lushing says he purchased one of Wall’s koshari girls, which is approximately 4 feet tall, and stands, holding a basket, in the entryway of his Santa Fe home. During the holidays, he fills the basket with ornaments or bells, adding to its charm. Says Lushing, “It is a fun piece and everybody comments on her work. A few of my neighbors have her things as well.”

If your collection could use a refreshing high note, Gilbert of NaPua Gallery challenges clients to be willing to try something new. “I always say a piece has to move you. Art with wit and humor will never fade and keeps you coming back for more.”

Others agree. Michael Duty adds, “When you open yourself up to the possibility of humor, that gives you David P. Bradley, O’Keeffe, After Whistler, Acrylic on canvas, 2007. Denver Art Museum, ralph l. & Florence r. burgess trust and native Arts acquisition fund insight into the personality of the artist and makes your collection approachable and comfortable. It reminds you that artists are people just like us.” 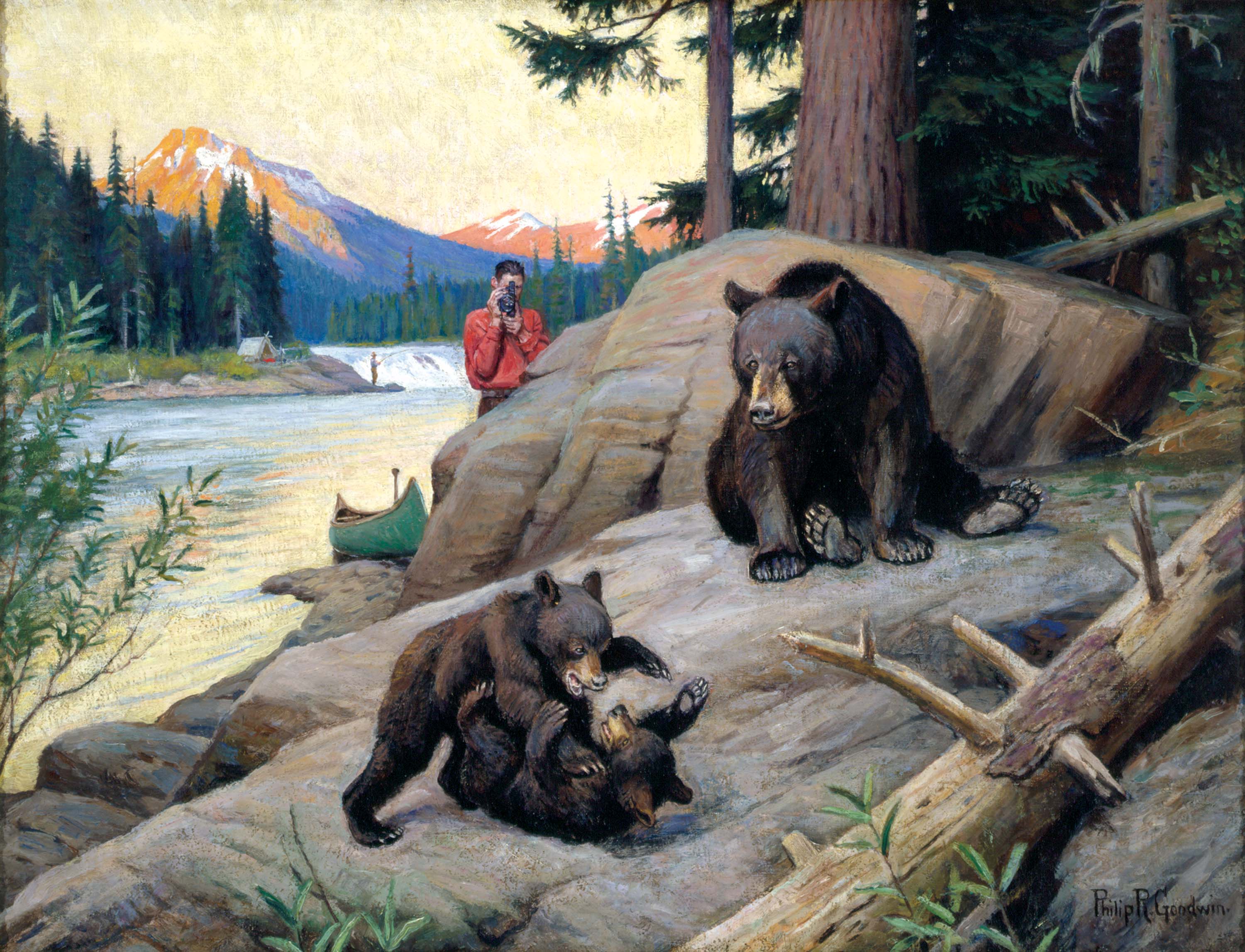 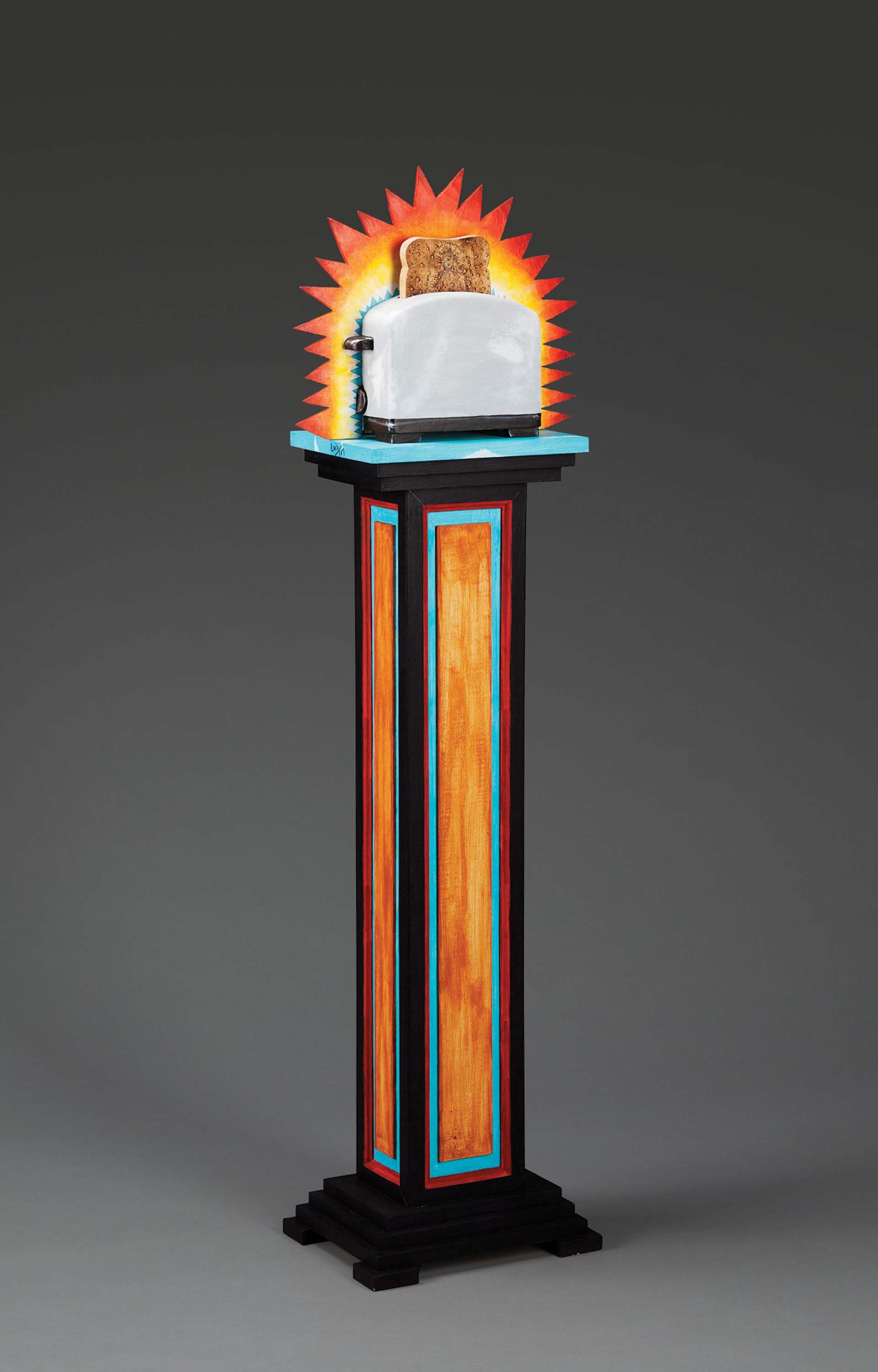 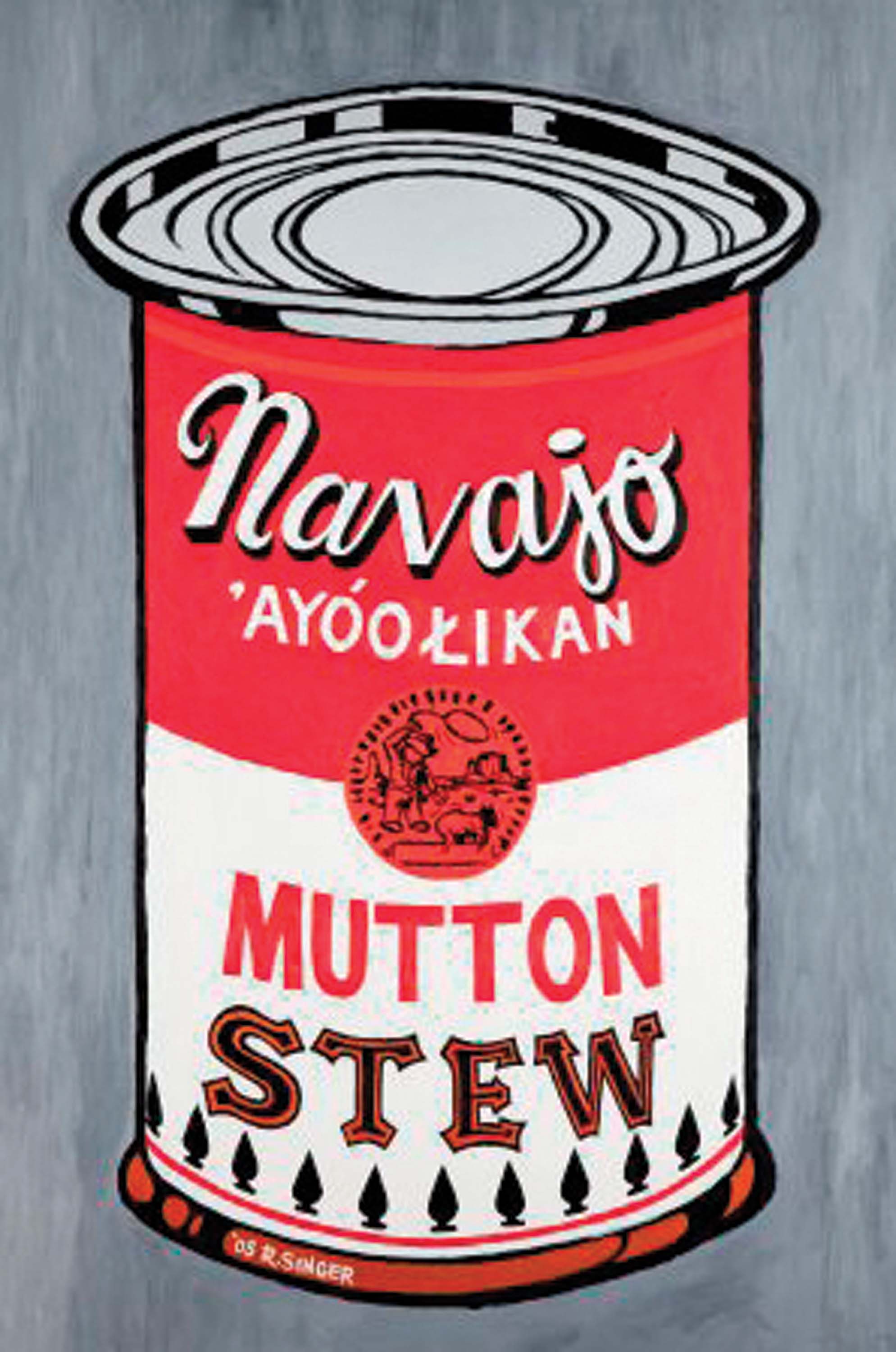 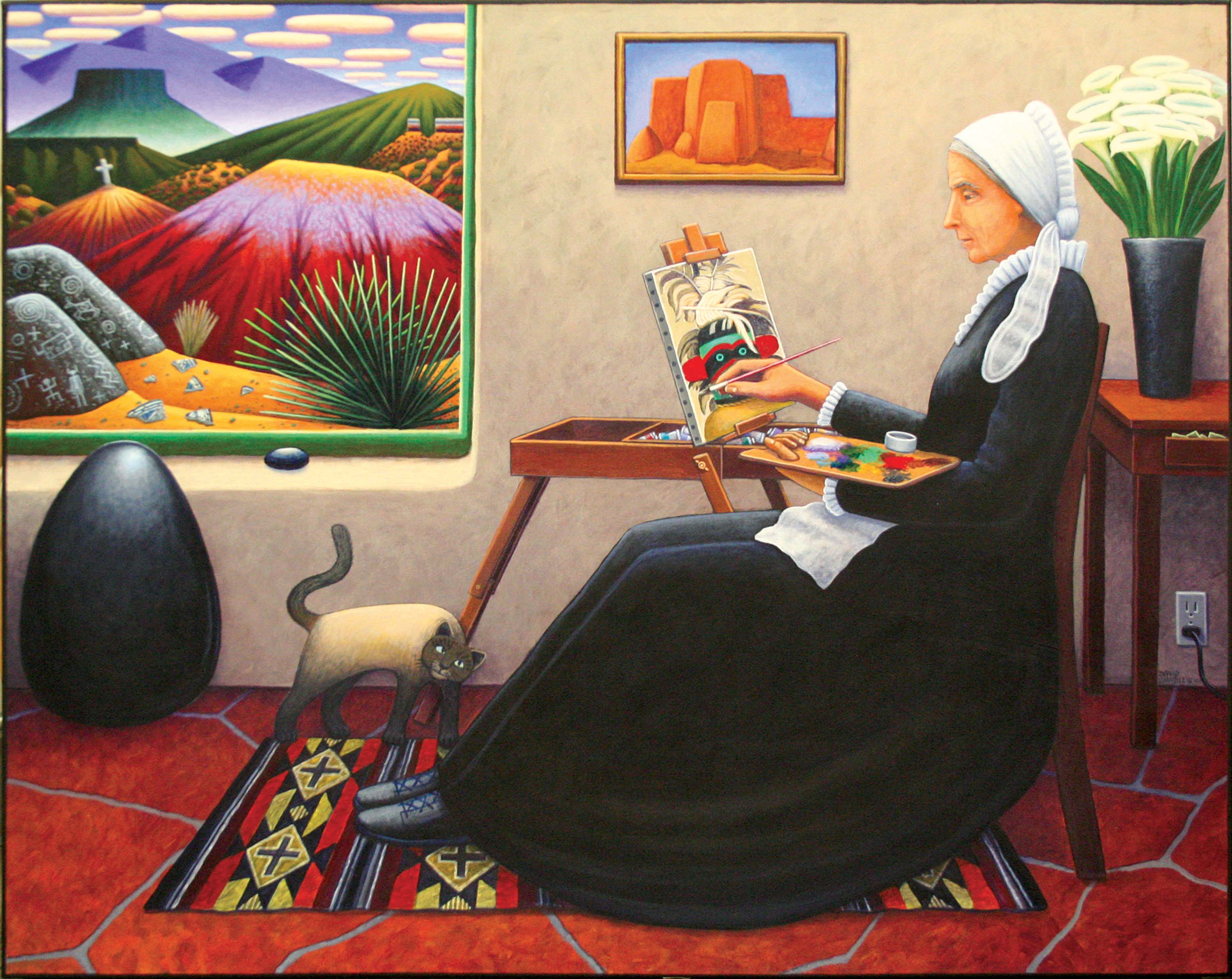 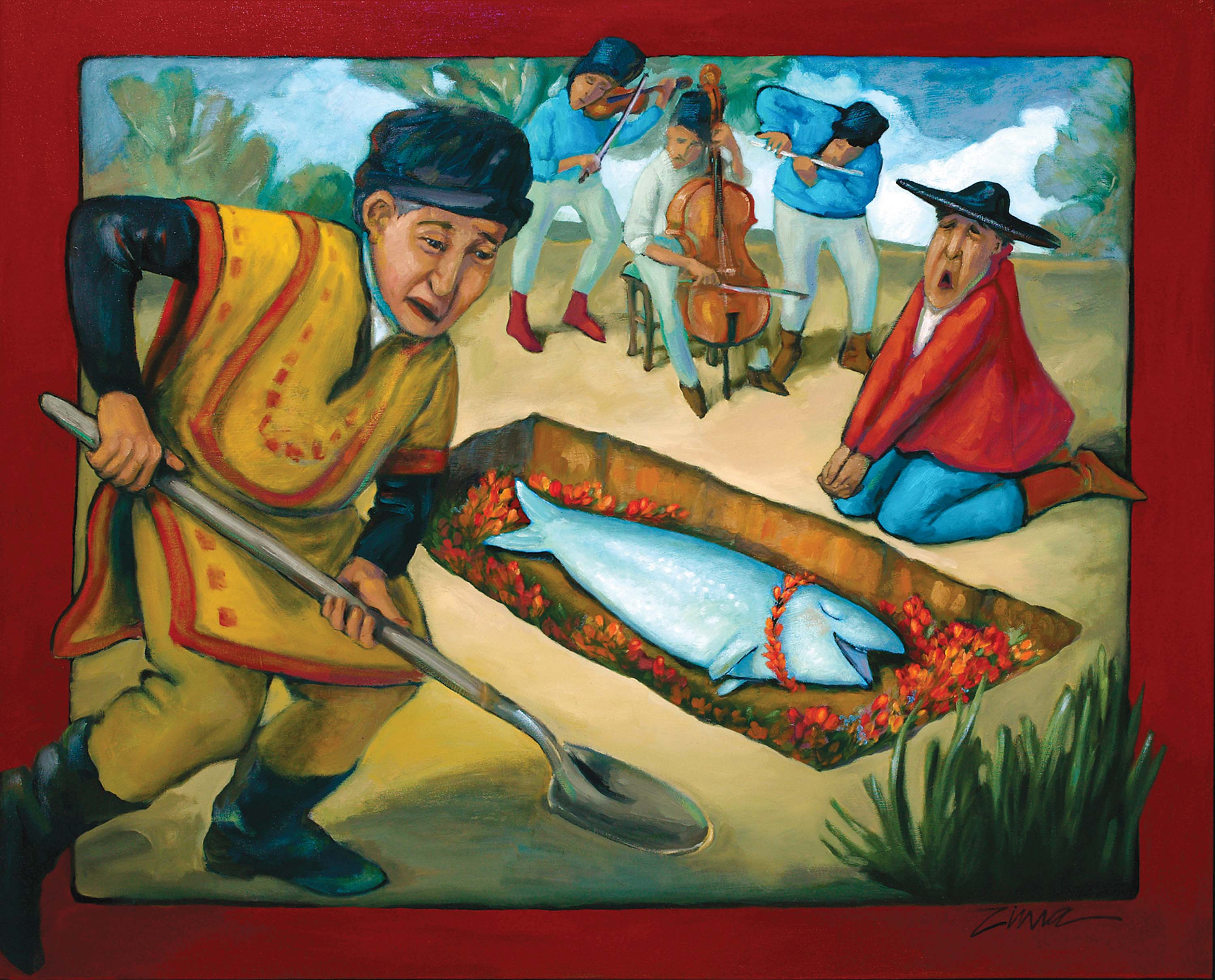 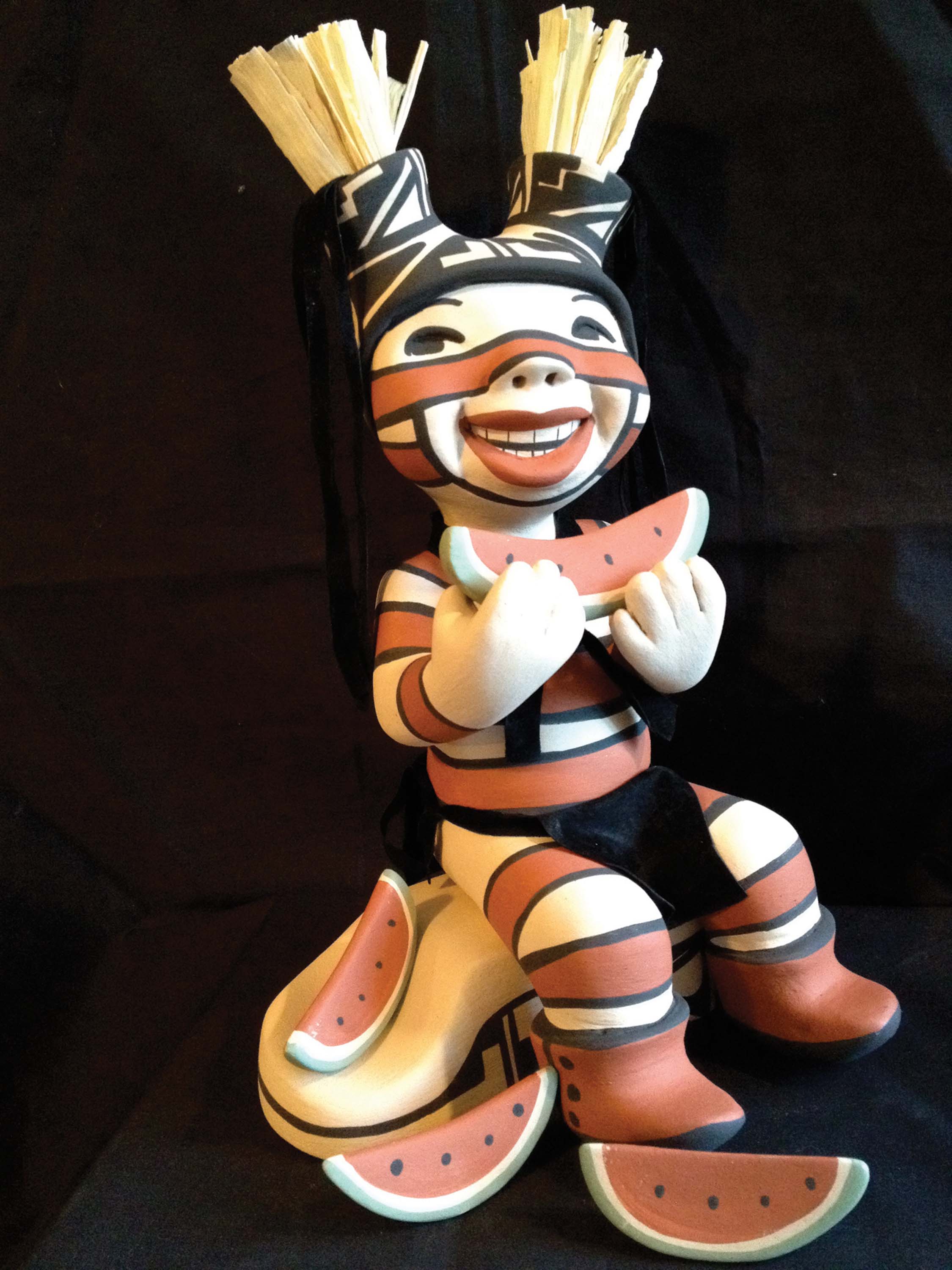 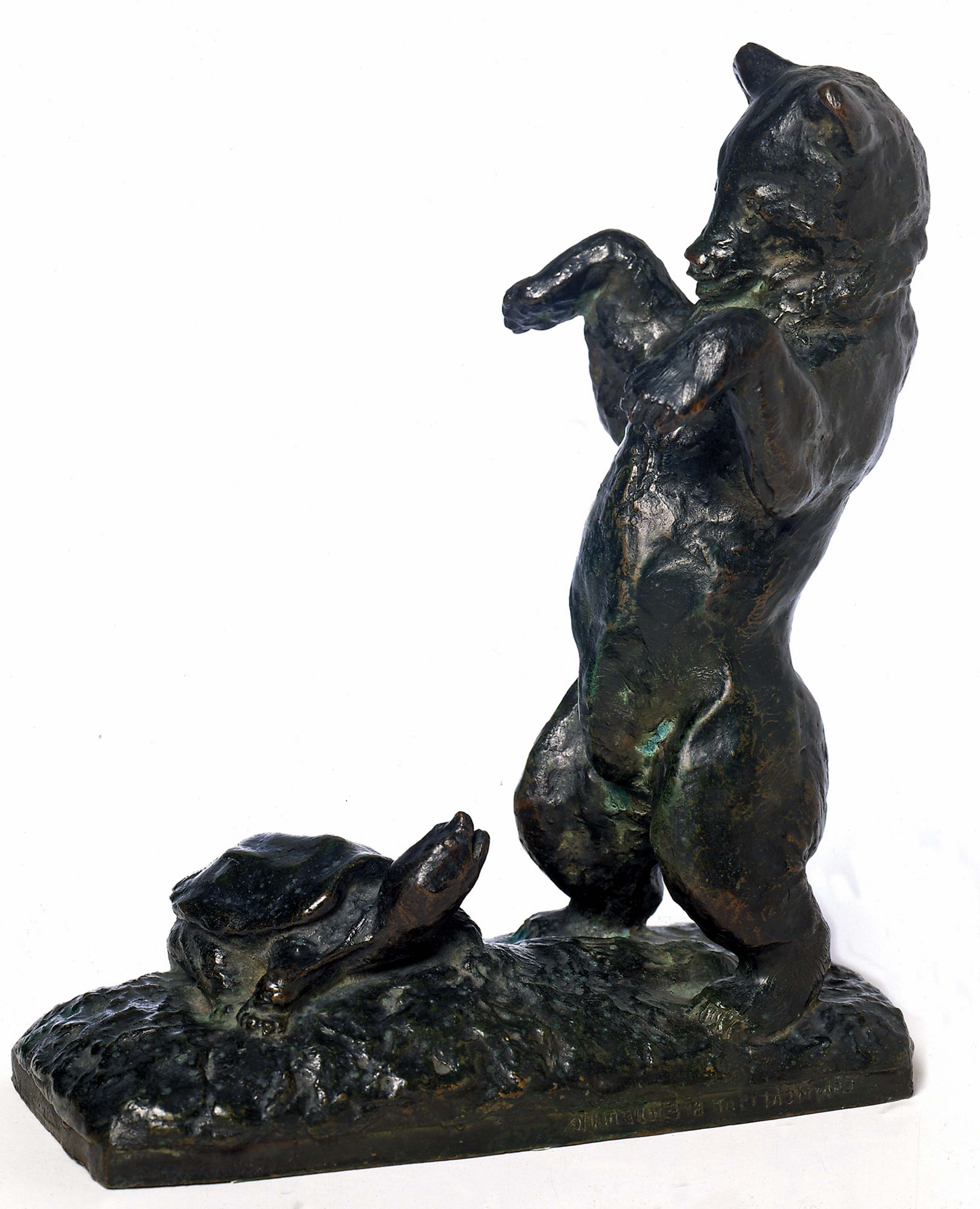