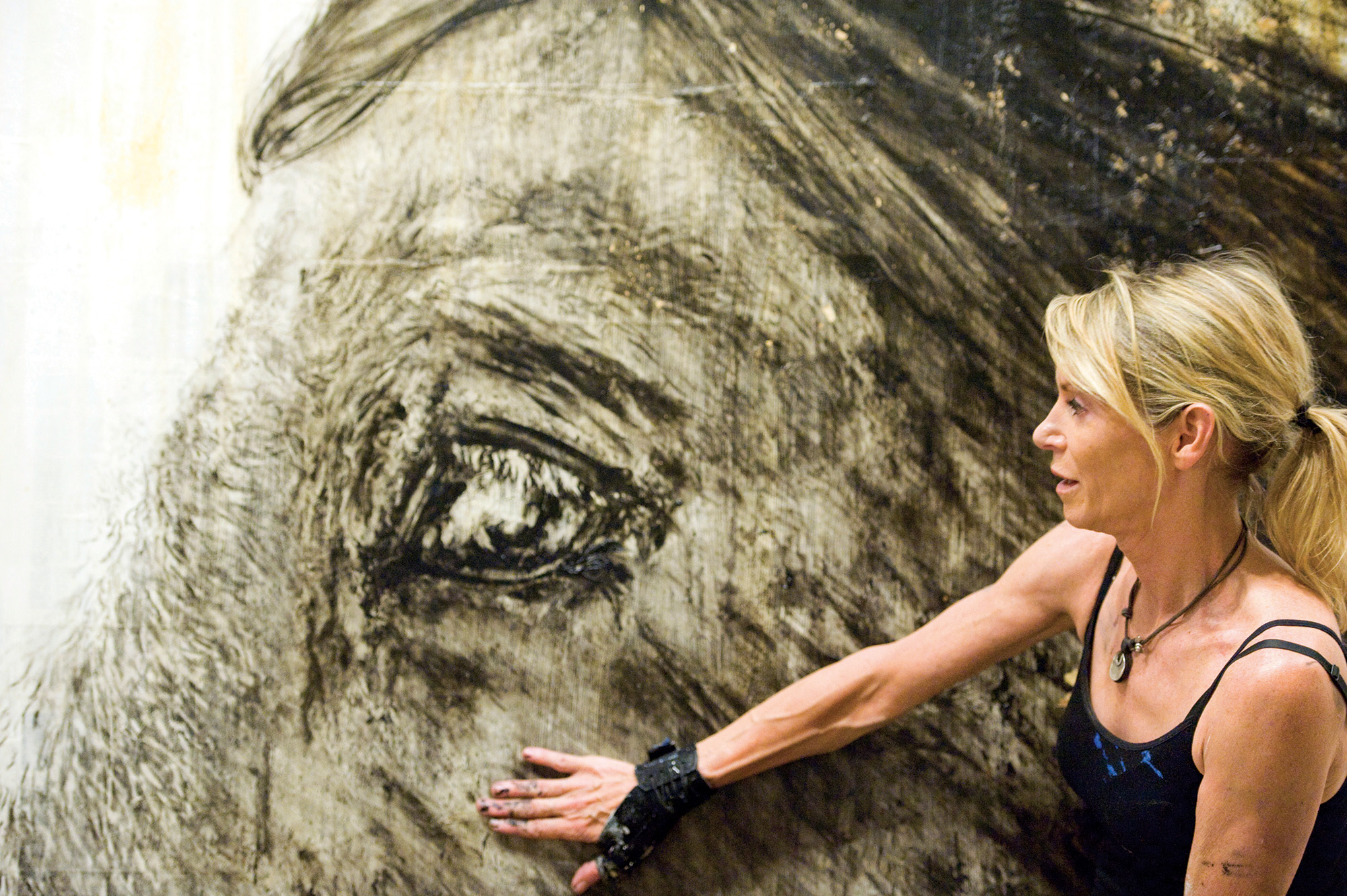 Ashley Collins peers into the eye of one of her horses. The artist is world renowned for her massive and commanding equine art that combines collage and painting.

09 Sep In the Studio: A Trip to Narnia

Ashley Collins calls them her children, these massive and majestic mixed-media creations for which she is so well known; and her Southern California studio seems the perfect setting for the process through which they are born.

Collins lives and works on a small ranch nestled in between the Cleveland National Forest and the Santa Rosa Ecological Reserve. Her private Eden is hidden among rolling hills that undulate like a golden blanket tossed upon a bed. Framed by shallow ochre and lavender mountains, the ranch is populated by ancient oak trees. She calls it Narnia.

Once part of a 750-acre estate owned by Ronald Reagan while he was governor of California, Collins’ Narnia is in the heart of Murrieta’s horse country. This retreat, south of Lake Elsinore and a few hours from the noise of Los Angeles, is a place for her to be present, reflect, recognize nature and, of course, create.

Through the gates of Narnia, at the apex of a rotund drive, is a stately colonial home which could easily have been the residence of Professor Digory Kirke from C.S. Lewis’ fantasy-novel series, “The Chronicles of Narnia.” The “hounds,” Harper, Atticus, Tin-Tin and Zeus, rush to greet all visitors with wagging tails and enthusiastic voices.

The house, with its tall ceilings and curvaceous grand stairway, is a treasure trove of Collins’ travels. This is a home “full of many unexpected places,” but the adventure begins outside. Beyond the back door, a combination of cultivated gardens and natural vegetation create the parklike setting that’s a constant source of inspiration for Collins.

The journey through the grounds begins at a circular pool flanked by four vintage lampposts. Next to it, a broad, lush lawn offers plenty of room for the dogs to zoom.

Adjacent to the pool and garden, historic oak trees stretch both outward and upward. Chief, Shaman, Stretch, Shantaram and Radagast are some of names Collins has given to the gnarly giants that dwarf the humans in their presence. They stand like silent guardians. “We are ants to them,” Collins says.

Beyond the oaks, pale green willows reach their sweeping tendrils to earth. They frame a long, narrow pond abundant with water lilies. On the opposite bank sits a casual tailing pile of rose-gold boulders.

Collins’ studio is just up the hill. Unseen from the main residence, two secluded guest houses sit atop a 36-car garage. Collins has transformed the garages into her creative space.

Near the entrance, shelves are stacked with newsprint. Weighted down by wooden branches, this paper is left to the elements to age, adding texture and color. The weathering of paper can take months, even years. Ultimately, they will become part of her artwork.

The first series of garages is where the artistic process starts. Wooden panels, standing between 5 and 8 feet tall, line walls. More shelves hold hundreds of antique books. The pages will be applied to the panels to form the base layer.

According to Collins, these pages represent the noise we’re bombarded with from the external world. Paint and paper will eventually be layered on top to “quiet the noise.” Some pages may be completely covered. On other works, words and pictures from previous centuries peer through.

Through a wide door with a long, polished copper handle is an expansive workshop. Here, Collins begins the process of layering and painting. Dozens of works, some complete and others in process, obscure the walls. The hounds are there, too. Stretched out on the cold, paint-splattered concrete floor.

“These are good floors,” Collins says, “I used to sleep on floors like these.”

She is referring to the many years she spent as a struggling artist; a time when she did not find support or acceptance with the conventional art world, despite her constant dedication and pursuit of her vision.

Collins was also told over and over that imagery of the horse was not contemporary art. Her breakthrough came only after she presented her work as being created by a reclusive Englishman in a small gallery off an alley in Venice, California.

Now, decades later, her art hangs in collections and museums found around the globe, from California to Singapore, Australia, China, England and back again.

In her studio, by the door, an inspiration wall is a work of assemblage in itself. Letters, notes and pictures combine with riding stirrups, leathers, calligraphy brushes and crowns. A suitcase decoupaged with words sits by the wall and is found near even more objets d’art.

A metal bookcase holds an overflow of paper hearts, pictures, Buddhas and animal sculptures. The illustrated face of Aslan (lion and primary character in Lewis’ series) adorns the cover of a book prominently displayed on the shelf. It is fitting, given the other lion-head statues hidden throughout the property.

In this sanctum, which few are allowed to visit, Collins overlays pages of printed word and conventional illustrations with the weathered paper. Then, she paints her iconic imagery. The panels are so large she must sometimes use two paint-laden ladders to extend her reach. Artifacts are often attached to the canvases. Chains, metal plates, fireplace bellows and even bicycle wheels transform the paintings into sculptures.

“My artwork is meant to be touched,” she says, adding that the final layer of each piece is a resin compound that’s bonded to the surface using a blow torch. This last stage determines which of the under layers will ultimately show through.

Just like the oaks outside the studio’s garage doors, Collins’ works are a commanding presence. To completely take them in, one must stand back and look up. The horses in her paintings are in perpetual motion, their manes blowing in the wind, their necks pulling away from restraints, their bodies pushing against the very boundaries of the canvases upon which they exist.

And, as with these horses, Collins stretches the limits, always experimenting, painting, sculpting and scheming new environmental installations. “It’s never too late for a new dream to begin,” she says. And all of these start from this mythical space created by both nature and her imagination. 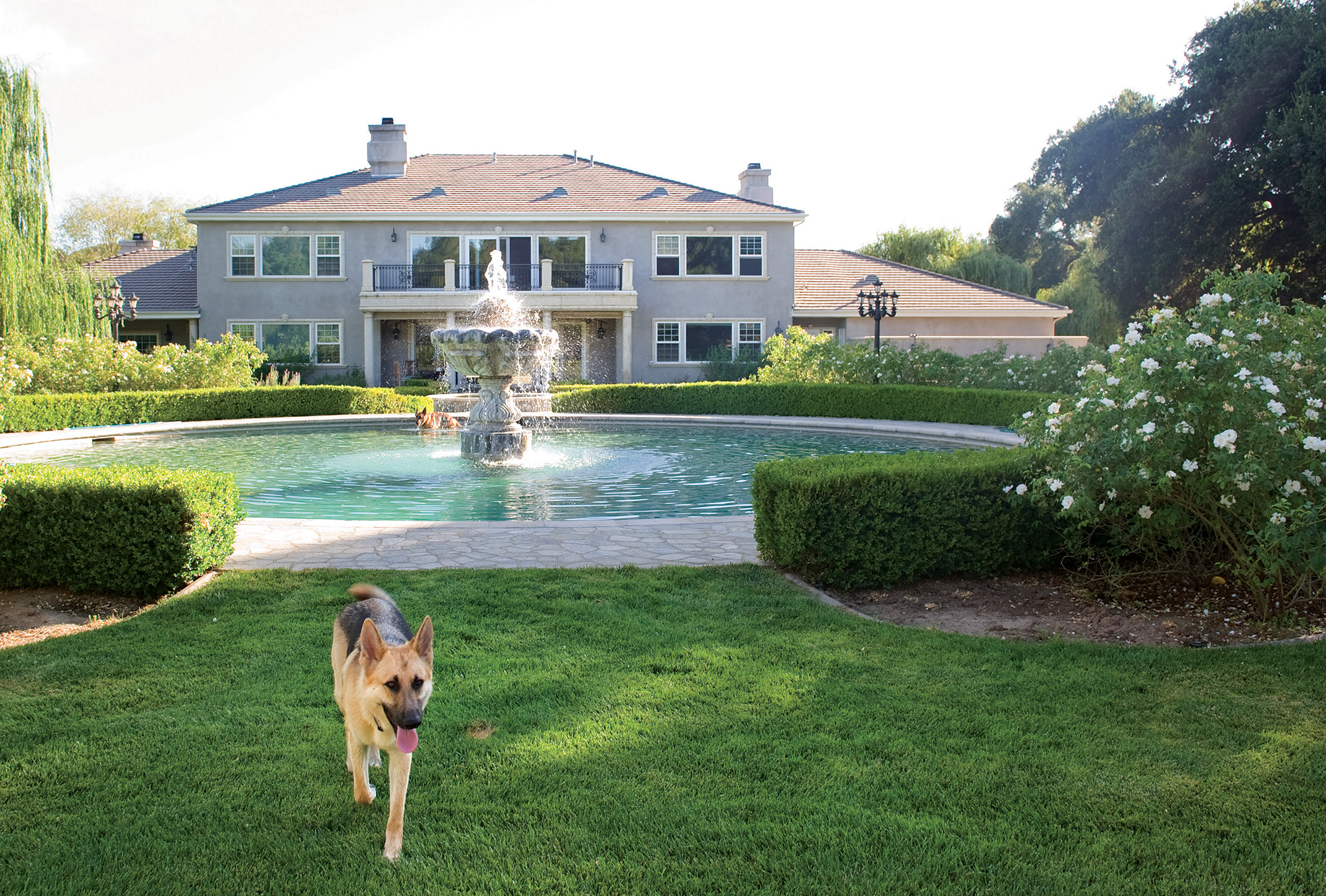 Zeus, one of Collins’ four dogs, has room to roam in the expansive garden. 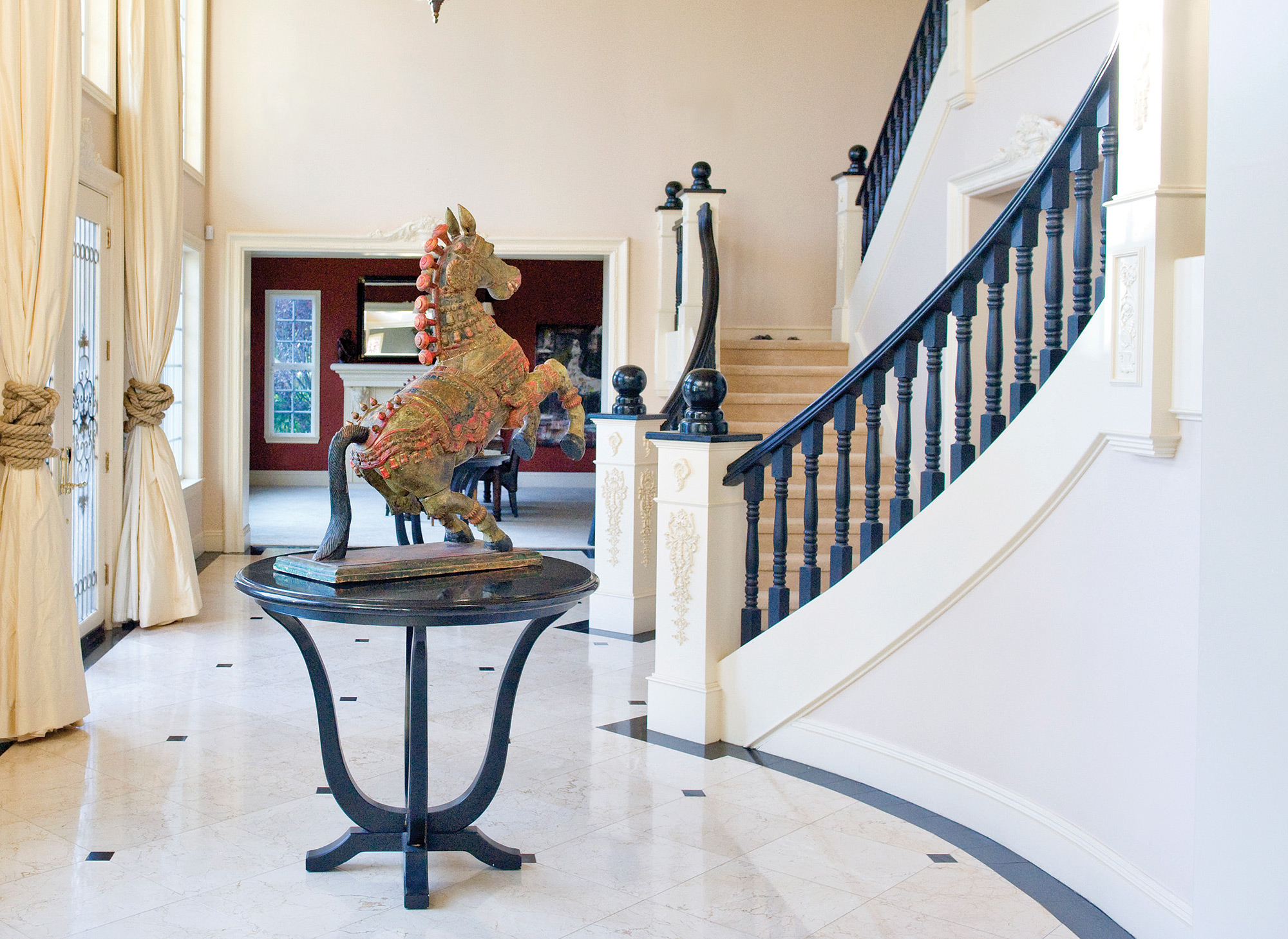 Inside Collins’ home are many artifacts from around the world which hold special meaning for the artist. 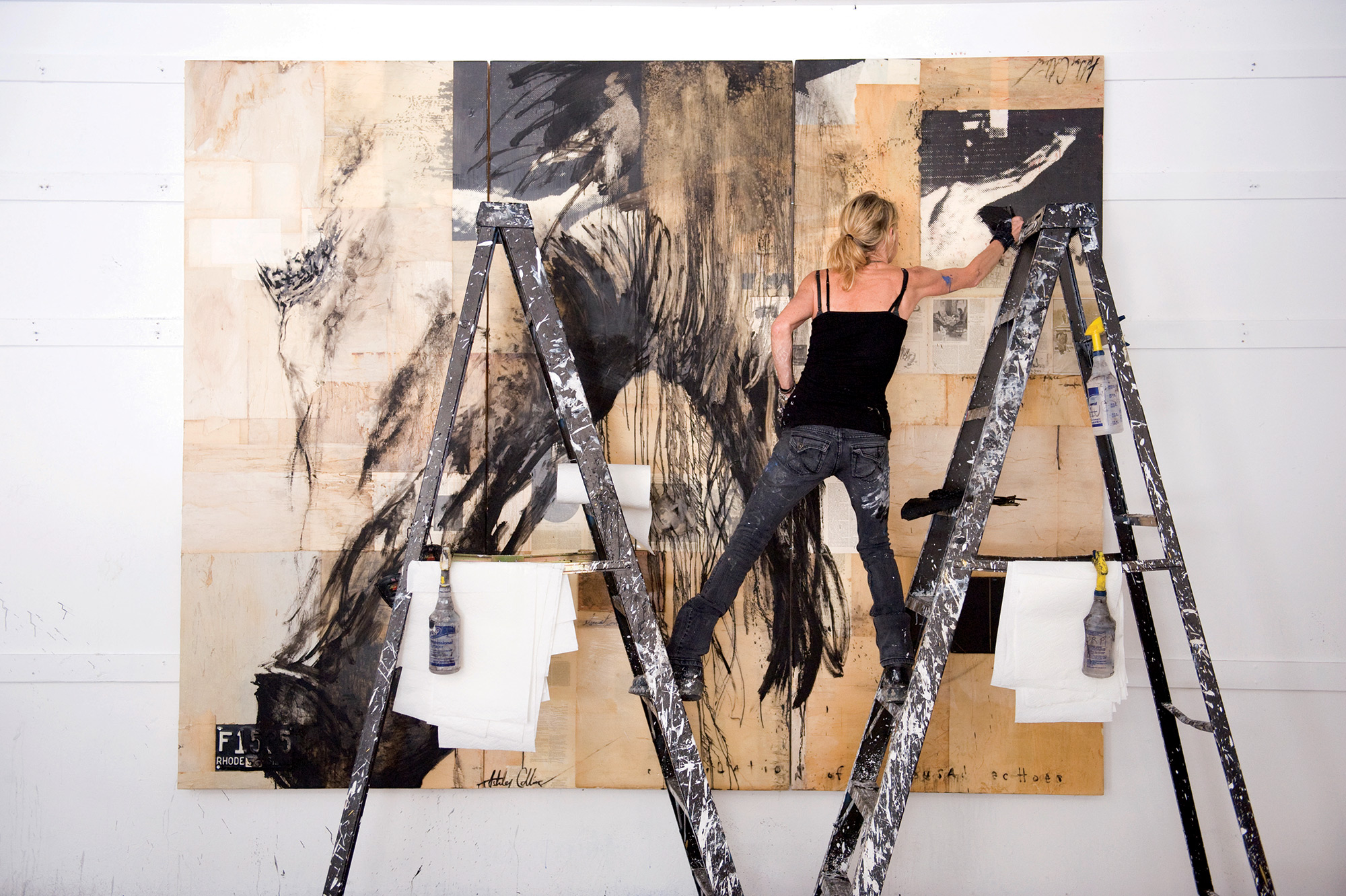 Collins transforms two ladders into a scaffold from which she builds up layers on one of her works in progress. 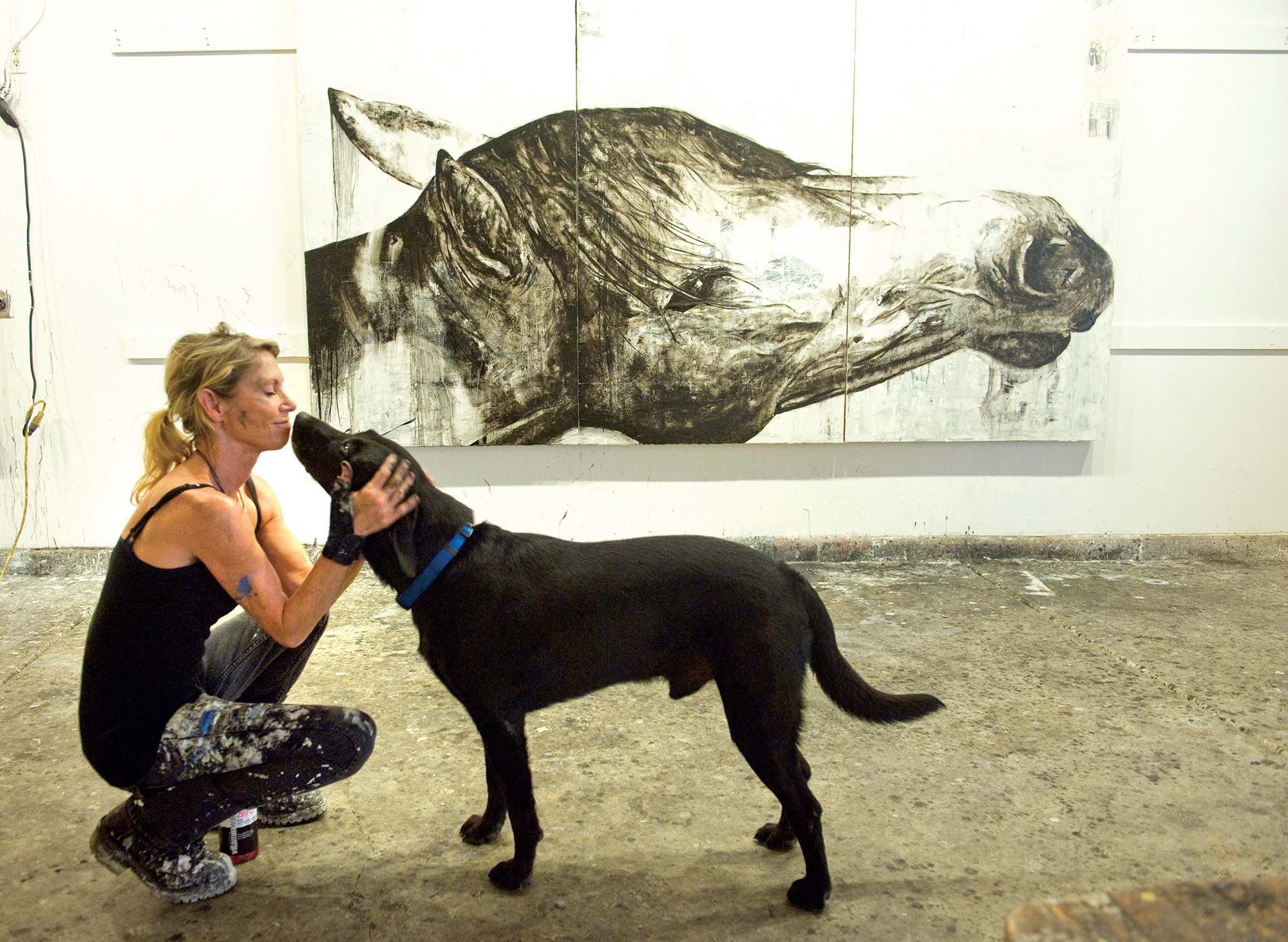 The family dogs are constant and faithful studio companions. 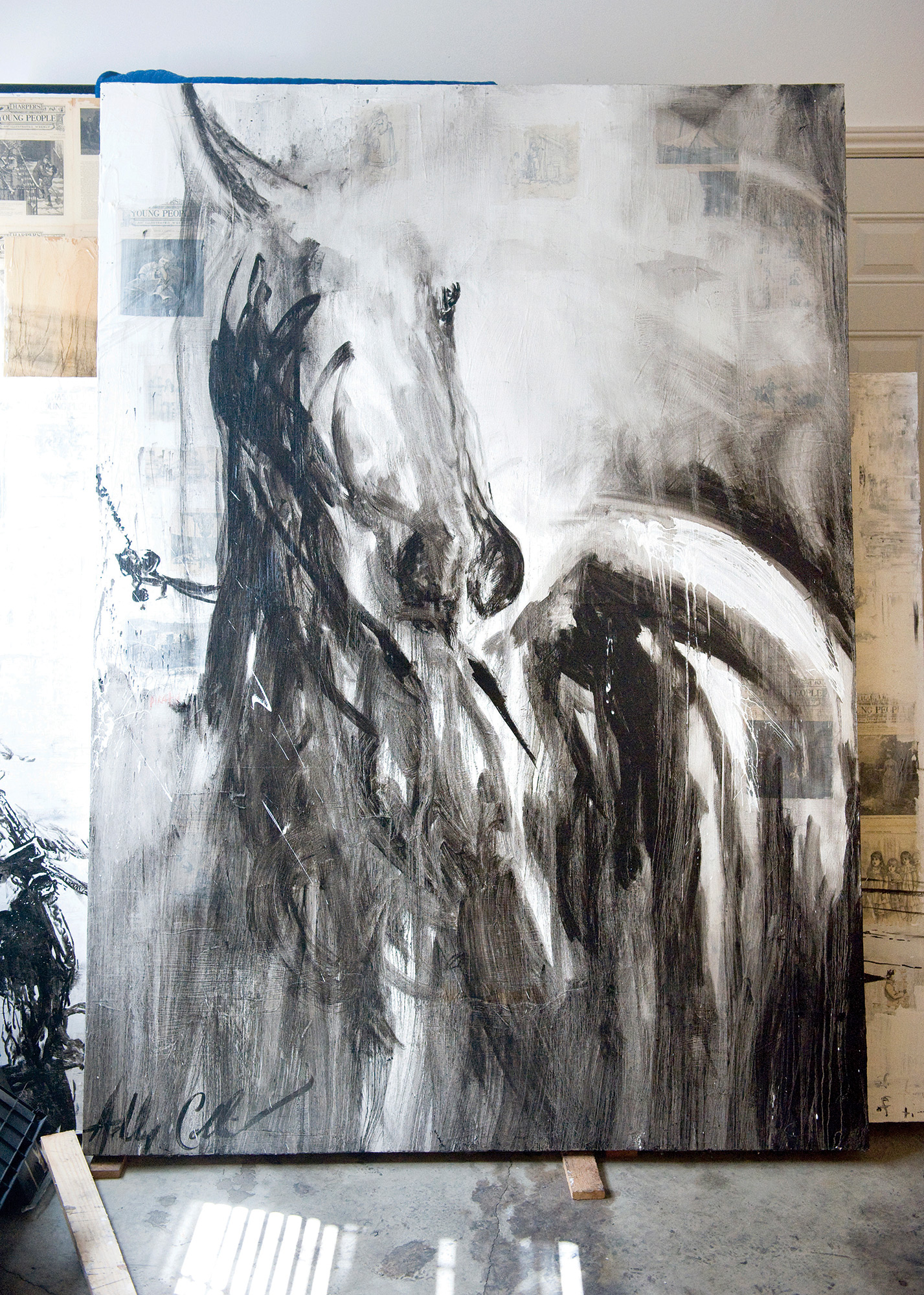 A completed work, titled “Proust,” sits in the studio, awaiting its collector. 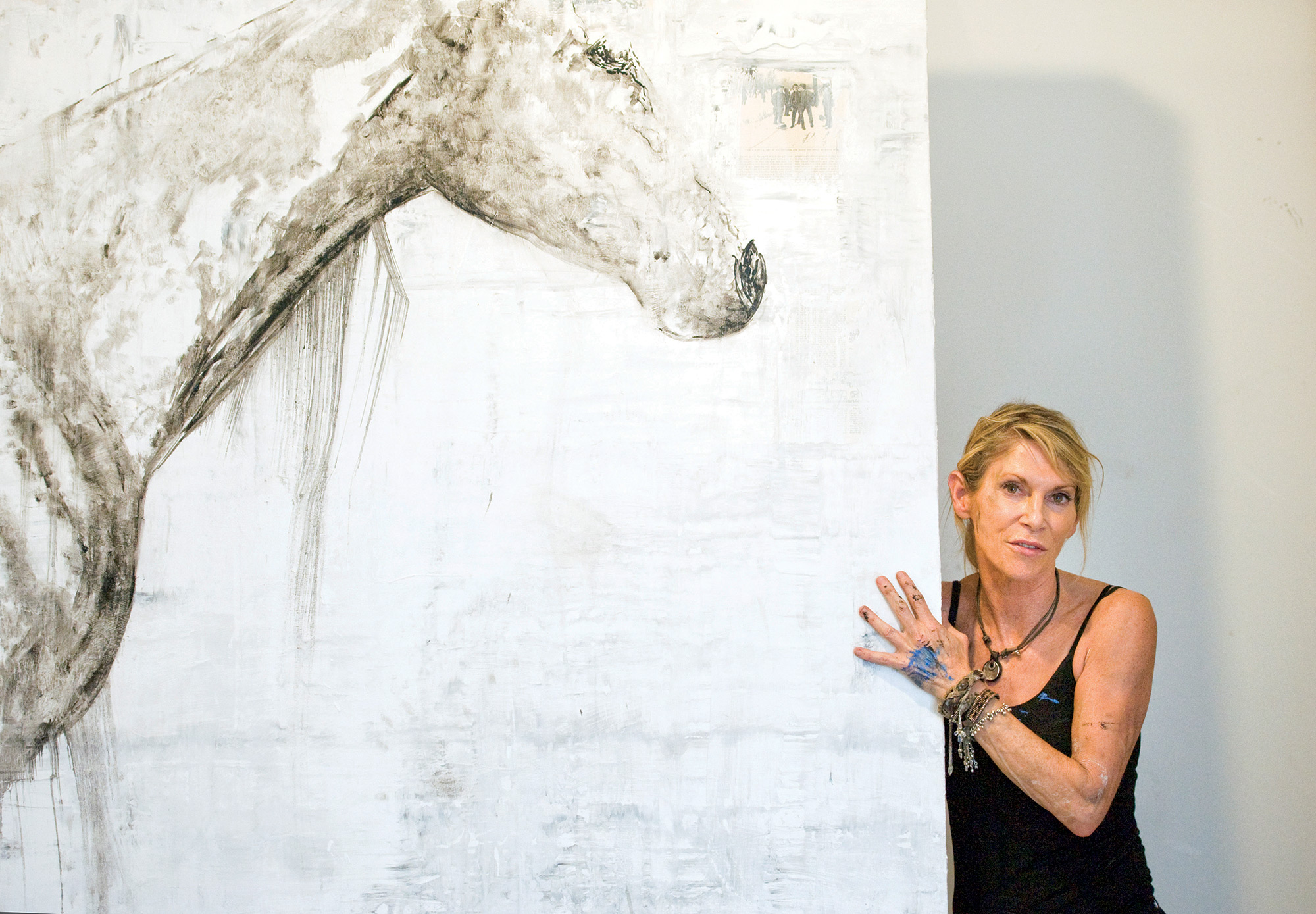 Collins’ paintings are taller than most people; she regards them as “guardians of the magic in our souls” that watch over their owners 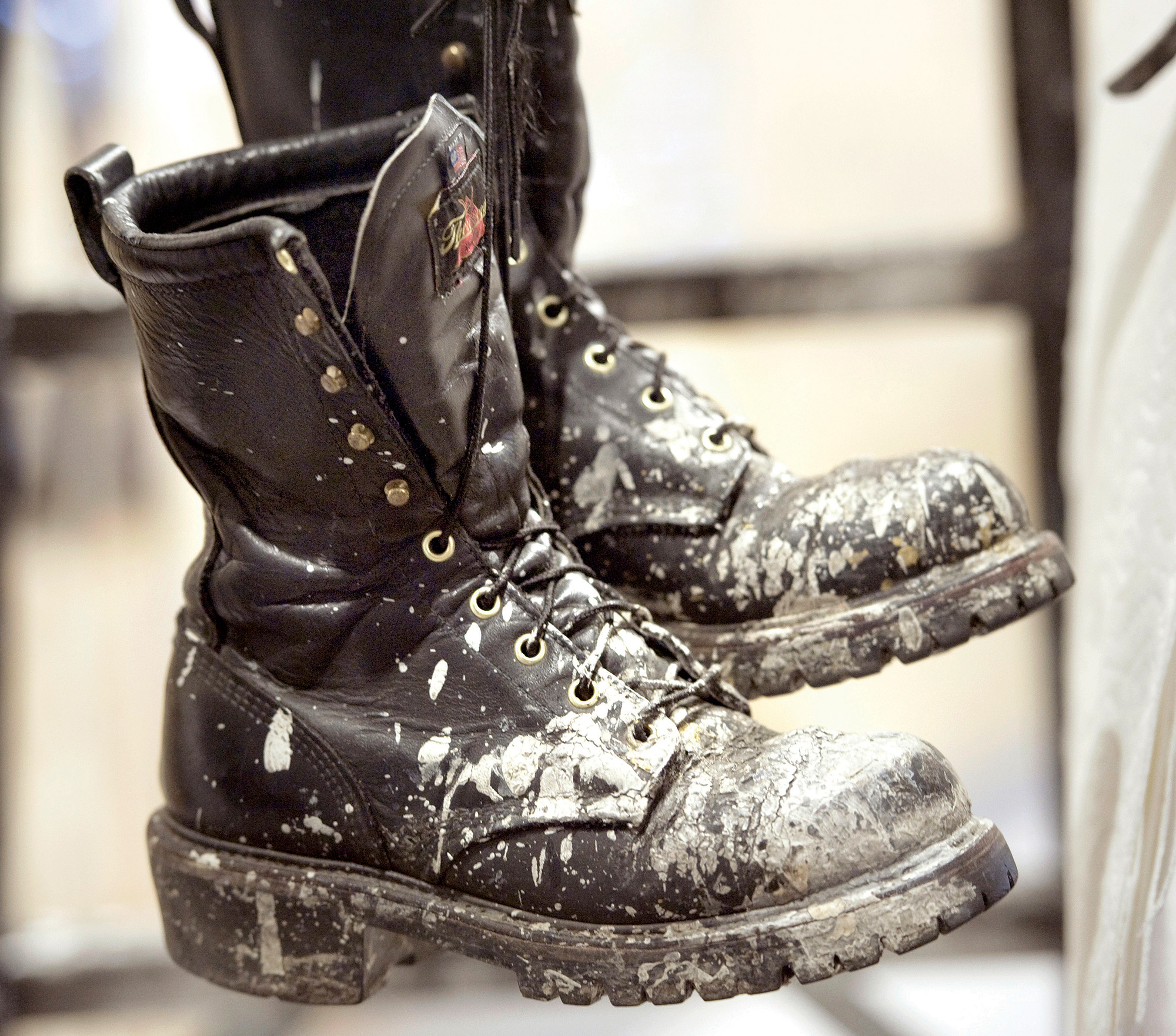 Boot splatter is inevitable when painting on a massive scale. 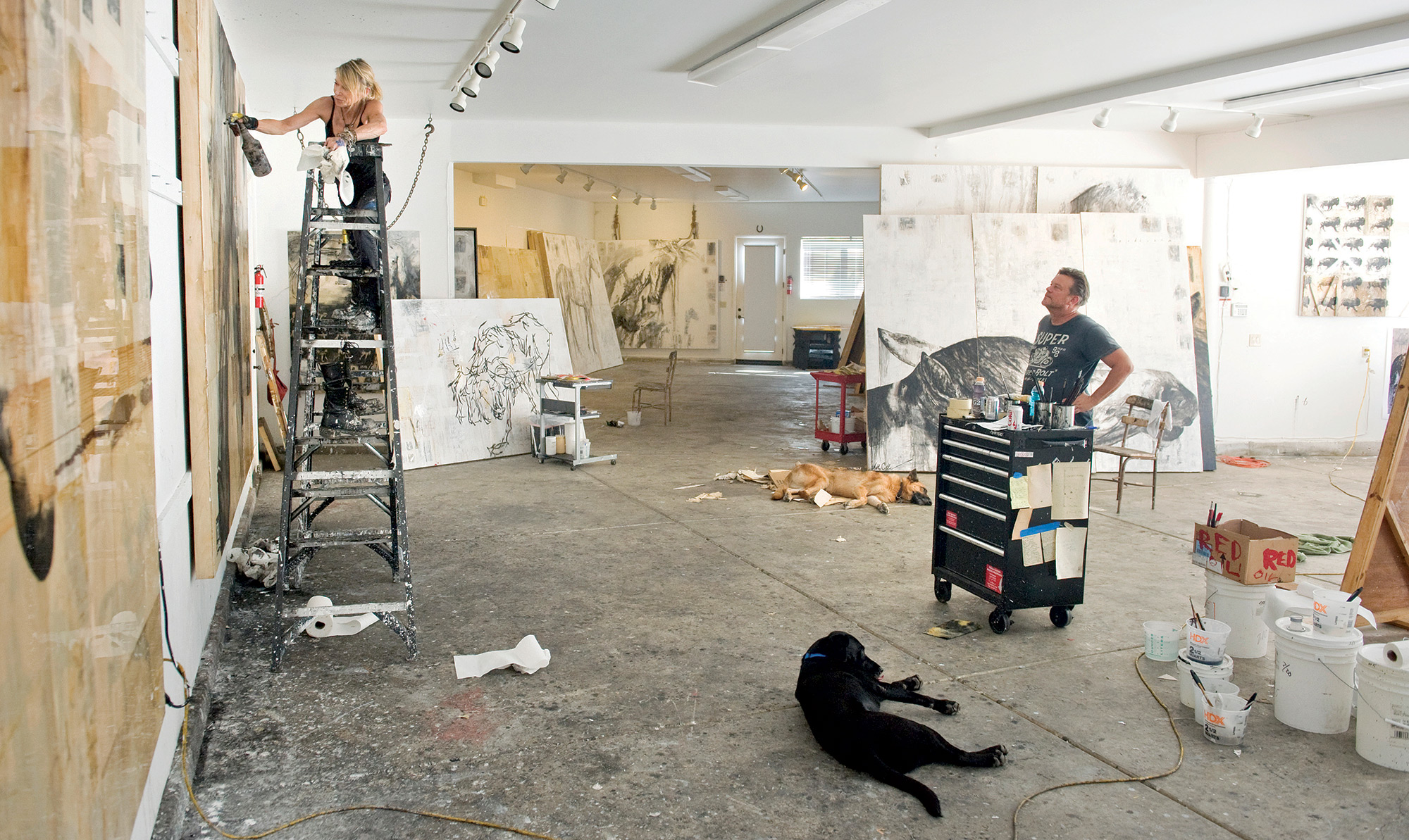 The creation process is often a family affair, as her husband, Douglas, looks on. 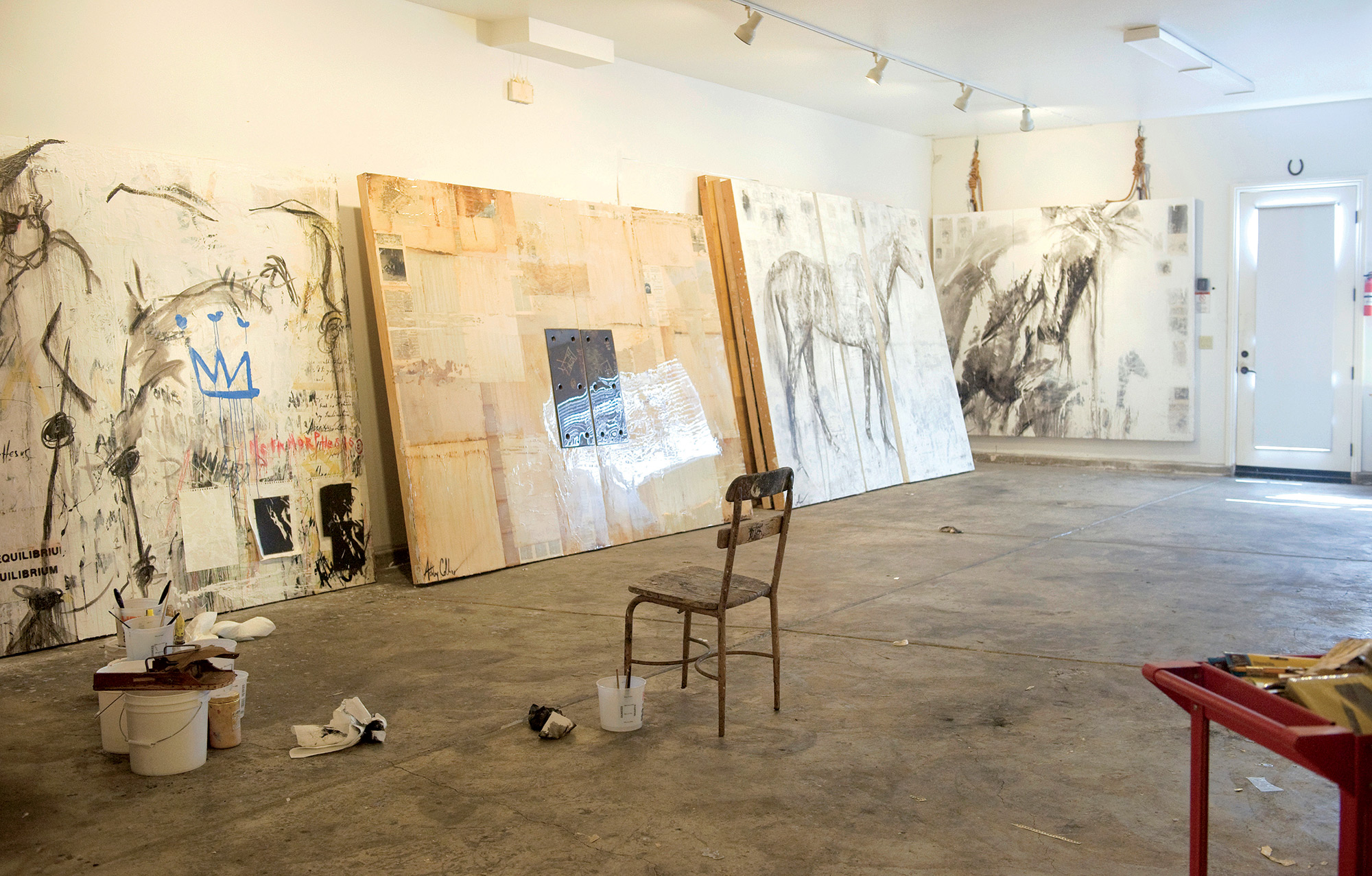 Collins’ works line the walls like a virtual herd of paintings. 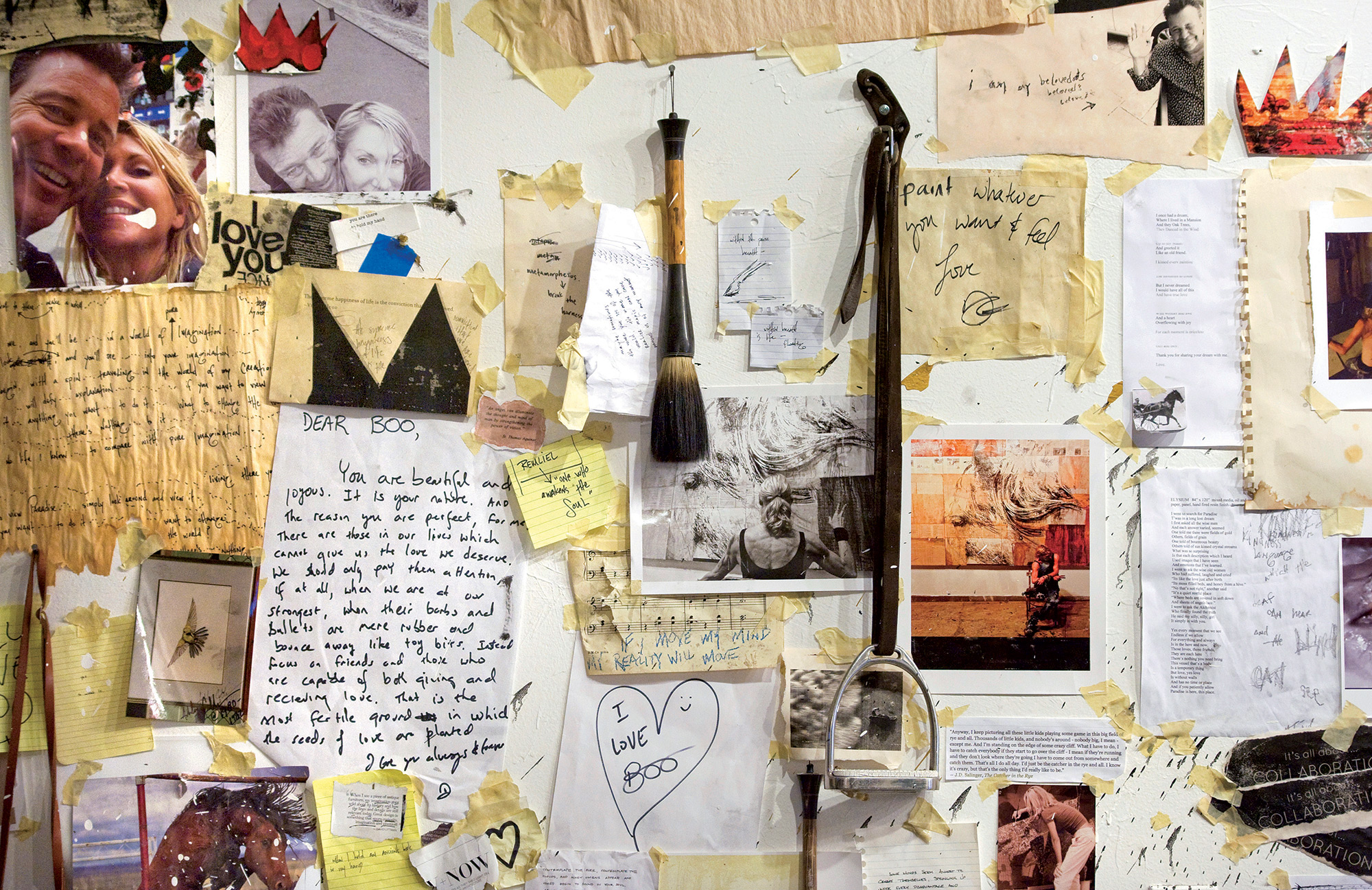 Collins has created an inspiration wall, a collage of images, drawings and words layered one on top of the other. 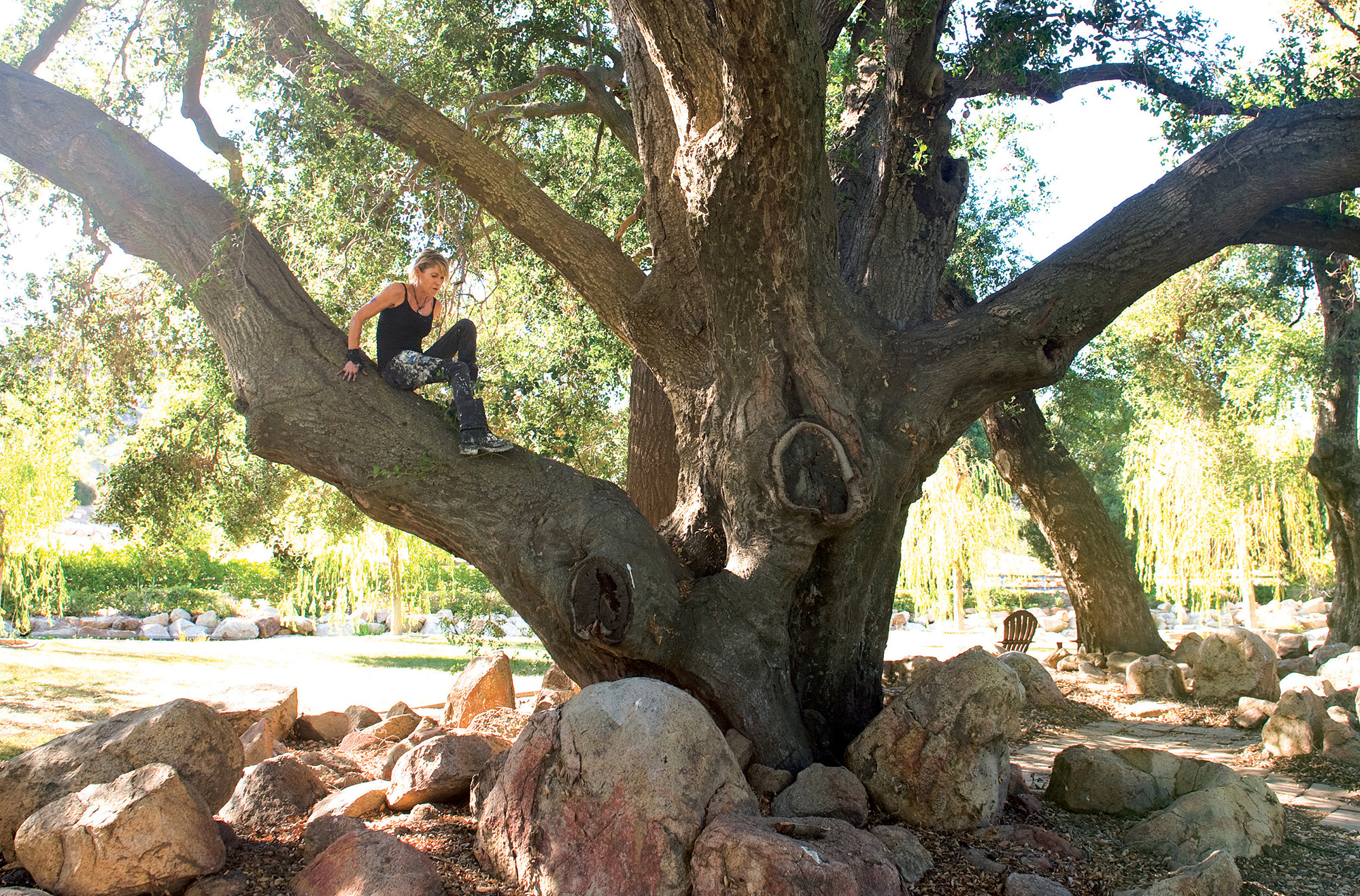 Collins finds solace and communion amid the giant oaks. 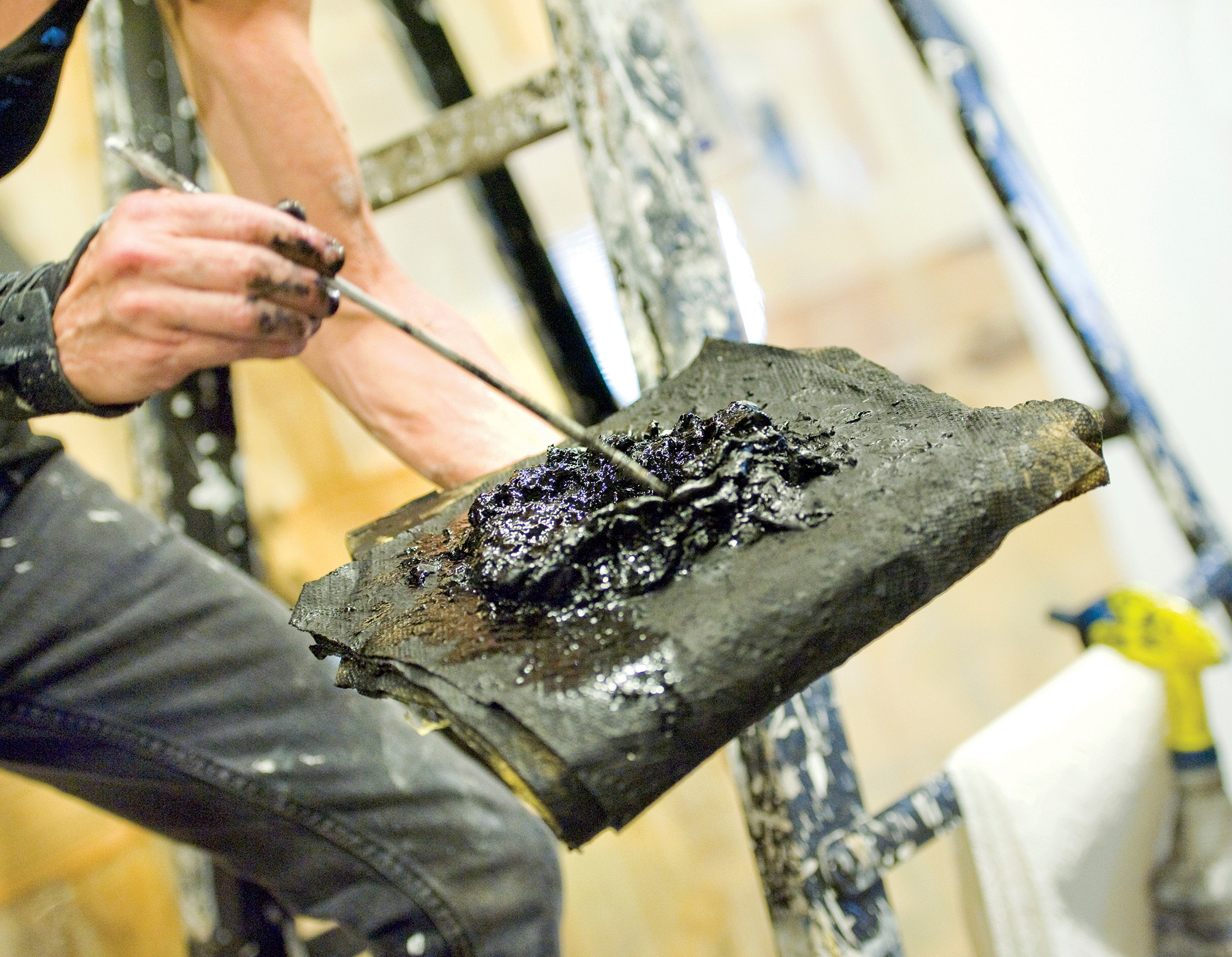 From her perch on the ladder, the artist dips her brush into her palette. 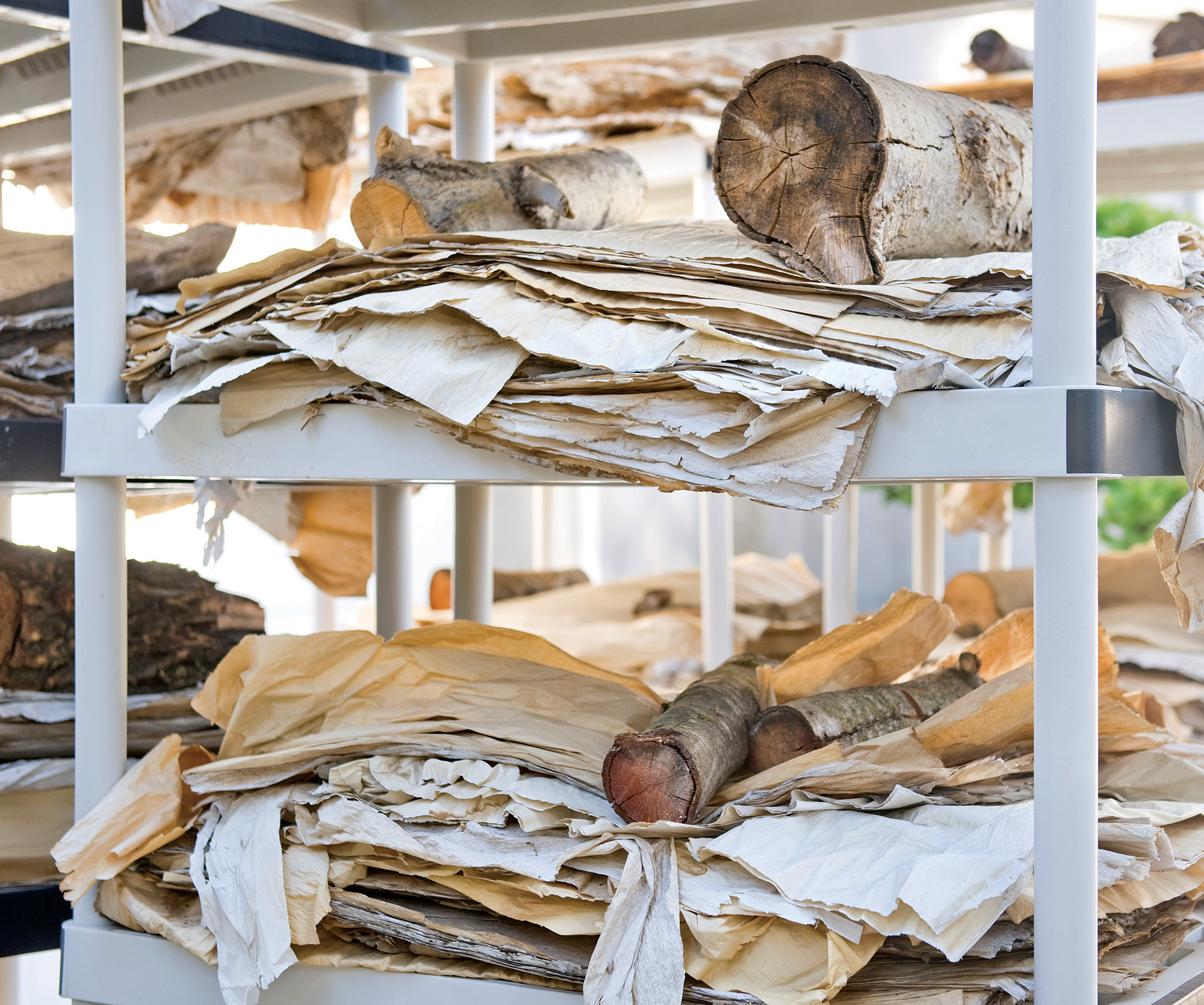 Paper weathered by nature is primed and ready to be applied to art panels.