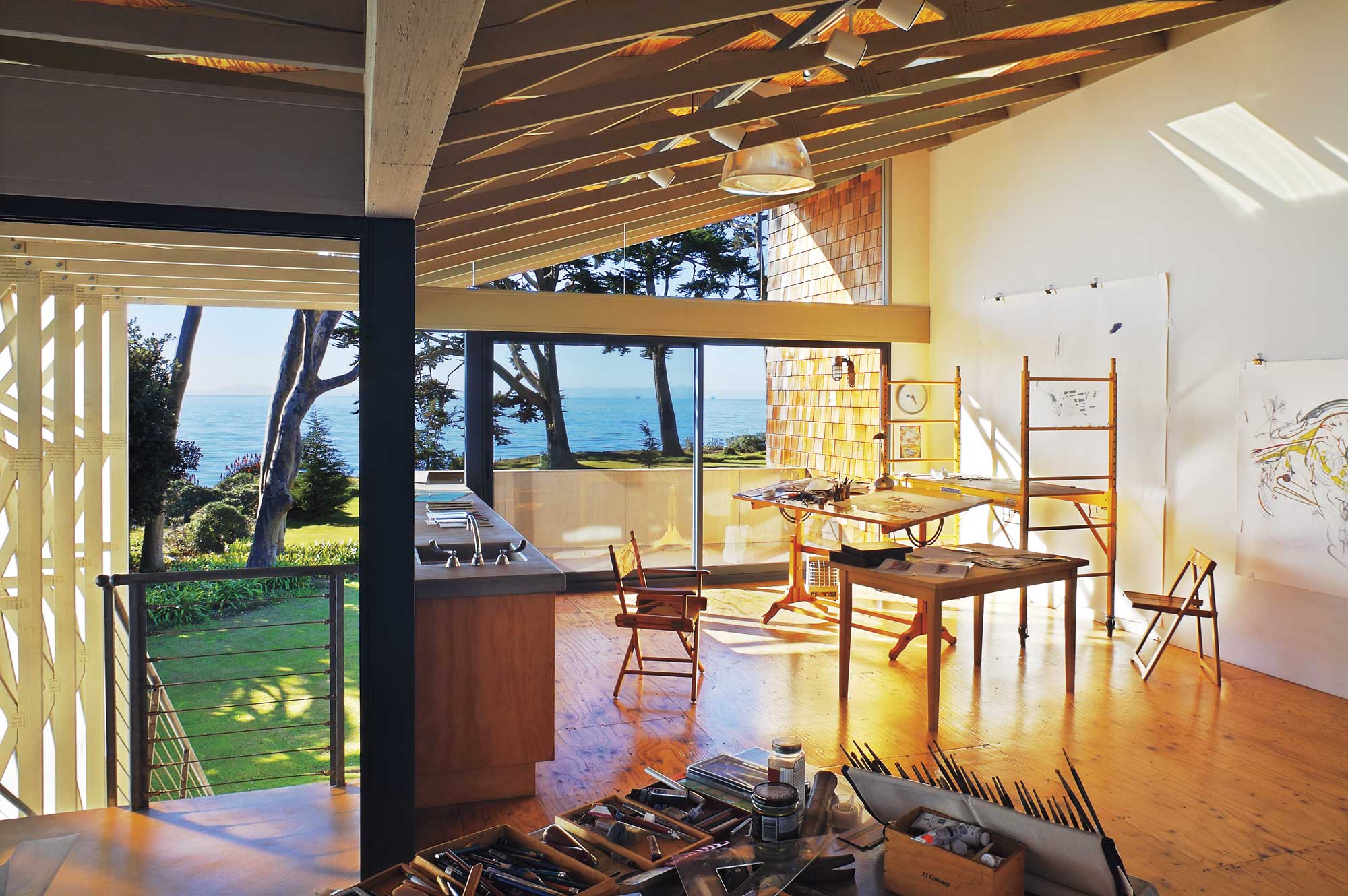 Diener began making much larger drawings after moving into her contemporary studio 10 years ago — but they remained as complex and compelling as ever.

30 May In the Studio: Ann Diener

Ann Diener’s need to draw is irrepressible. Wherever she finds herself is as good a place as any to break out a pencil and paper. Sitting in her contemporary Santa Barbara studio, with breathtaking views of the ocean and mountains visible from the north and south, the statuesque brunette rattles off all the unconventional places she deems perfectly suitable for working: airplanes, trains and cars, provided the ride isn’t too bumpy; hotel rooms, for sure; the kitchen table.

Still, if you’re going to be putting in long days and nights to make art, as Diener does regularly, why not, if you can, do it in an environment that accentuates nature’s splendor and maybe even brings some beauty of its own to the mix?

Building a studio on her and her husband’s property, in tandem with a garage and guest room, had been the couple’s plan since moving to the coastal property in the ’70s. But they never came across an architect they felt was capable of creating what they wanted. So they waited … and waited. For two decades Diener used the second floor of an old A-frame garage adjacent to their house as a studio. With unusable wall space due to the pitch of the roof, it wasn’t ideal, but it was good enough.

In the late 1990s, Diener saw a brand new contemporary Montecito home designed by Robin Donaldson of Shubin and Donaldson Architects. Within minutes she knew he could build the studio she wanted.

“She was kind of the ideal client,” Donaldson said. “As an artist, she just thought, ‘Okay, an architect is an artist as well. Let him do what he wants.’ ”

So she didn’t have a list of demands, simply that she needed a good studio with a garage and guest room, and that it basically stick to the footprint of the old A-frame. Having majored in art as an undergraduate, Donaldson imagined what he would want most if he were a fine artist. The answer was wall space.

Entering the studio at the top of a simple concrete staircase and through a glass door, it’s the abundant natural light and the wall that stretches from one side of the building to the other you notice first. Today, two drawings are up and in progress. As tall as the artist herself, they’re intricate, dense compositions in pencil. They grab you by the lapel and pull you into another world. A metal scaffolding stands a few feet away for Diener to use when working on the top sections of the paper. From there, directly to the left, is a floor-to-ceiling window and a sliding glass door leading to a patio; beyond that two gangly eucalyptus, the ocean and the clear blue sky.

“It wasn’t until I was making art full time, which was maybe in the last 10 years, that I really moved into these enormous drawings,” Diener said. “It seemed to follow the kind of work I was doing, and the studio was here also. I’m sure that had an effect of making my work larger because the wall is enormous.”

The position of the wall to the west intentionally blocks visibility of the main house. “What I wanted to do is have it be that when she’s in her studio, she’s isolated from the rest of the man-made world.”

Donaldson tried something new in this project. He used gang nail trusses on the exterior. Normally, these kinds of trusses are employed in the construction of roofs, typically in track homes, and always on the interior. Rising up the right side, encased in Thermoclear translucent acrylic panels (often used in greenhouses) to allow light, they turn the corner and make the roof. “It was this whole kind of construction that is all open and you can see how the building is put together,” he said.

Right now, Diener is getting ready to start something new. “I’m about ready to start a really big drawing. The paper should be up today or tomorrow.” She will need some help because it’s heavy — 300-pound paper — and has to be torn from a roll.

Either way is feasible. There’s plenty of room.

A regular contributor to WA&A, Isabelle T. Walker also writes about health for The American Journal of Nursing, Modern Physician and www.reportingonhealth.org. She is the founder of www.homelessinsb.org, a blog about homelessness in Santa Barbara, where she lives with her daughter, Emma, and golden retriever, Lady. 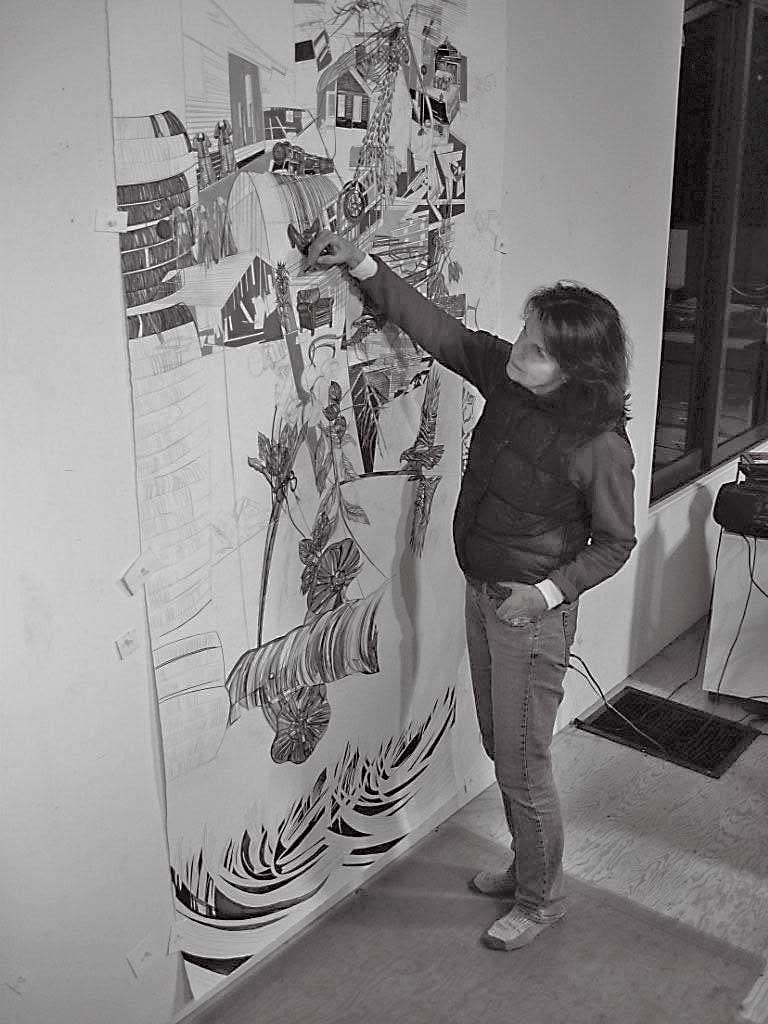 The artist at work on Deluge, 2010, graphite, Prismacolor, gouache, ink and cut paper on paper 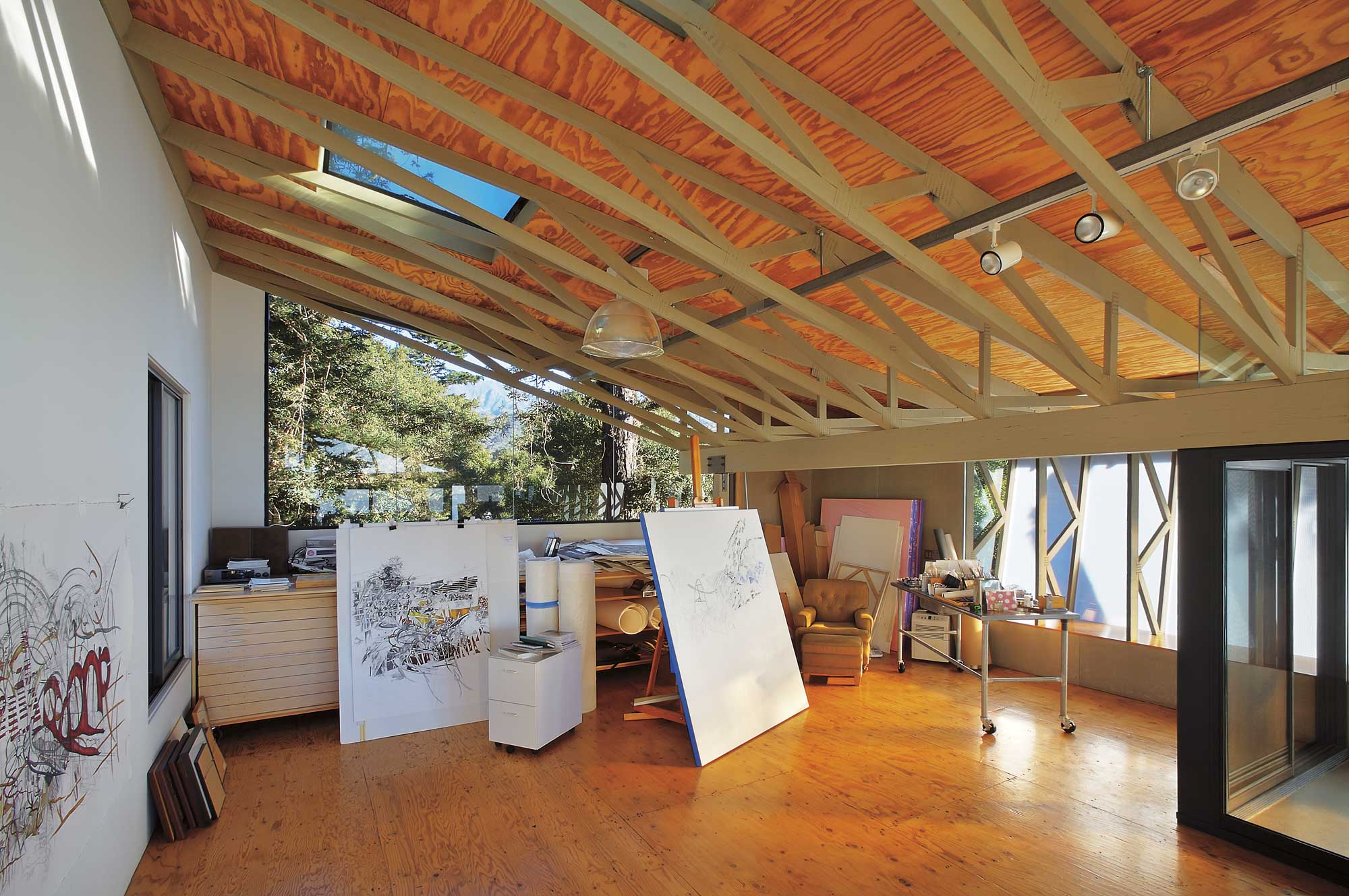 With extensive windows and skylights, and an abundance of angles, Ann Diener’s Santa Barbara studio is itself a study in light and space. 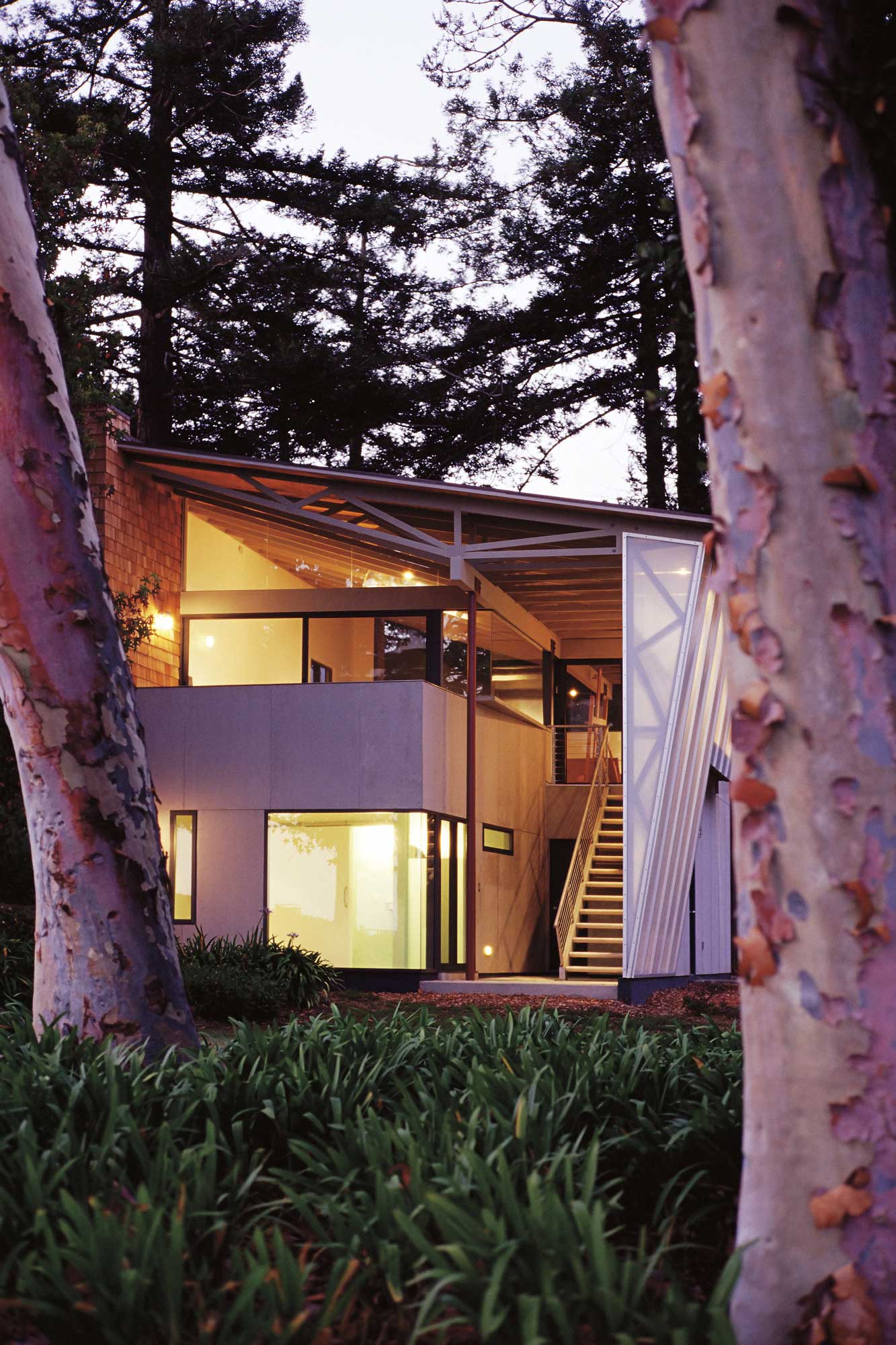 In Diener’s second-floor studio, gang nail trusses are used on the exterior of the building. Encased in translucent acrylic panels, they open the building’s structure up for all to see.