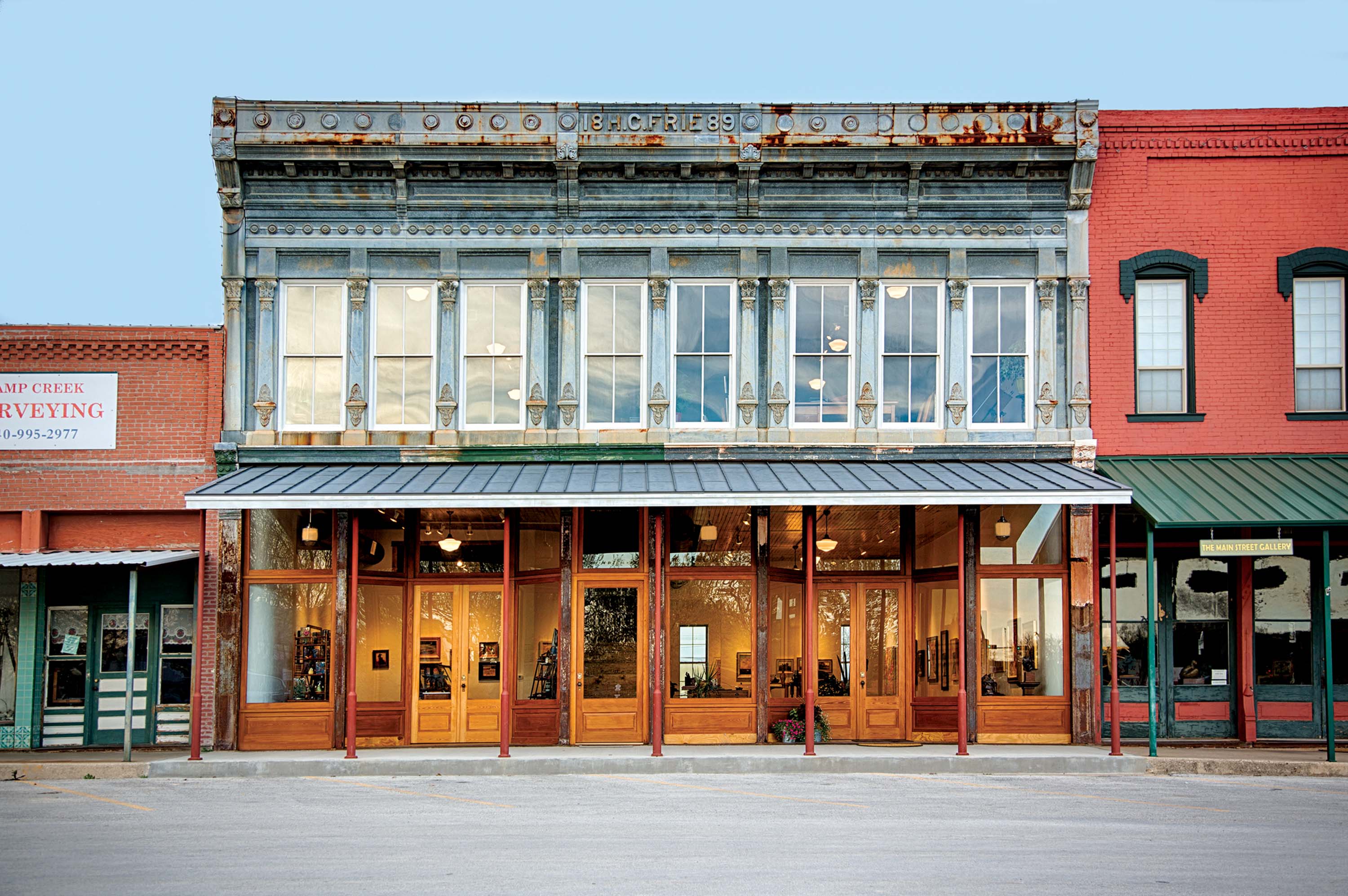 09 Jun In the Studio: Blazing a New Trail

“The Old Chisholm Trail” was a song covered by countless voices: Roy Rogers and Dale Evans, Gene Autry, Tex Ritter and, more recently, Michael Martin Murphey and the Charlie Daniels Band. Even a yodeler recorded the tune back in 1950. It spins the tale of a cowboy driving cattle to the railheads in Abilene, Kansas, on the famous Chisholm Trail, which some consider to be the original Texas highway. It’s said that between 6 and 10 million cattle traveled the route. Barbed wire fences and quarantines ended the functionality of the trail in 1884, but the song lives on, as do the descendants of those who traveled it, and the communities that grew up around it.

Well-known cowgirl artist Donna Howell-Sickles is among those who ventured along the trail, though not in the 1800s as her great-great uncle Joseph did. Howell-Sickles and her husband, former architectural model maker John Sickles, discovered Saint Jo, Texas, in 1998, and it is where she now paints her adventurous and colorful cowgirls for collectors and museums far beyond the reach of the Chisholm Trail.

Raised on a ranch in the Red River Valley, less than an hour’s drive from her studio, Donna discovered that the small Western town of Saint Jo was co-founded by a relative. “My great-great uncle, Joseph A. Howell, was one of the founders of Saint Jo,” she says. “The Howell Street in Saint Jo — that’s me!”

Donna and John settled in the small village after 25 years of living in Frisco, Texas, where much of their time had been spent remodeling an 1895 Victorian house next door to Donna’s studio. When the small town burgeoned into a city, they began to look for another small town.

Now the couple loves being in Saint Jo, population just over 1,000. “From my upstairs window, you can see where the cattle would have been on the old Chisholm Trail. The Town Square, with its gazebo built in 1909, is the pride of the community. And still, we are only one and a half hours from Dallas — not totally isolated but it has a way of feeling that way,” Donna says.

When the couple moved to town, they purchased the Davis-Blevins building on the square where they lived. Their second purchase was the Presbyterian church, built in 1909, sited just off the square, which served as Donna’s studio until 2012 when they finished renovations of the Frie Building, circa 1872. “The studio at the church was great,” she says. “It was beautiful and peaceful. I never intended to leave it. When we started renovations on the Frie and saw how the upstairs had turned into such a beautiful, wide-open space, John suggested I might move the studio. He thought it looked like the perfect studio. Obviously, I agreed.”

Townspeople were happy to have the couple breathe new life into their tiny Western town. Conversations at the local Dairy Queen often included exclamations about the work they were putting into the town’s 140-year-old buildings. The local banker told John, “You’re never going to get your money out of those buildings.” To which John replied, “No, but at least they’ll last another 140 years.”

The Frie building, condemned and in danger of being torn down, concerned Donna and John. “It’s a great building and a great looking one, too,” Donna says. “It was something we had talked about doing for years. But it was such a huge project, the time had to be right for us to step up to the plate and do it.”

With its view of the town square, and a setting befitting her characters and their companions, she adds, “We are blazing a new trail, we are totally committed to being here. We have put our money where our heart is.”

With their commitment to rebuild their newest acquisition, purchased in 2009, John talks about its beginning stages: “The day we bought it, you could see blue skies from the first floor,” John says. “When we took the roof off … it rained 7 inches. We were devastated to see the floors ruined and buckling. It turned out to be a blessing as we removed three layers of flooring exposing problems we wouldn’t have seen otherwise.”

In order to rebuild to the original footprint, they began by removing the metal front off the 1880s building. All the lumber used in the project was milled to match the original wood. Hull Restoration in Fort Worth rebuilt the windows, and some old nails were hammered straight and reused. “I love old places because they have generous proportions. I love the high ceilings, the windows and the materials,” Donna says.

Howell-Sickles is connected to the studios she works in and the homes she and John live in, much like the cowgirls she paints. “My work is about women and how they enjoy being where they are. It’s a celebration of the Western style of living and what a unique place it is. There’s not a lot of pretense, they are happy being what they are. They are connected to their world in my drawings and paintings.”

A double-door of cypress welcomes visitors into the Davis-Blevins Gallery, where she shows her work, along with works of other artists. “I wanted to do something for the town,” Donna explains. “And all I know is art, so in 2006 we opened a gallery and included a gift shop, where we’re using several original showcases from the old Meader Brothers Mercantile.”

Pine beadboard lines a stairway to Donna’s second-floor studio. Bright light enters a wall of windows looking toward the square. Right now it is from the Southwest. “The town is angled, the back of the studio faces northeast, the front, southwest,” Donna says. “At 3 p.m. this time of the year, the light is so bright, you don’t know what color is what,” she finishes, laughing at her expression. Live plants, happy with the abundance of light, give the studio a gardenlike atmosphere. Filtering shades on the windows allow the artist to adjust the light seasonally. “John thinks the light has changed my color palette. He sees the first two pieces I created in the studio as being darker because the daylight was so bright. I doubt it will stay that way,” Donna says.

Her artistic finely tuned sense of color influenced certain decisions during the remodel. “The ceilings had been painted a blue at one time and a green another time, then a cream. We sanded them and I liked the colors showing through, so we varnished them and left them,” she says, looking upward.

Five easels stand in the studio on wide-planked long-leaf pine flooring. At any given time, drawings and paintings fill the easels. A workbench serves as a tabouret while red industrial tool chests house Howell-Sickles’ acrylic paints and brushes in an orderly fashion. Lawyer’s antique bookcases line the walls on one side, filled from top to bottom with keepsakes and props. An old mantel completes the wall of bookcases.

Things to inspire the artist are at hand — coiled ropes and a box of elk antlers. Hatboxes sit alongside boots you might see on a cowgirl in a Buffalo Bill Wild West Show. An orphaned taxidermy fox peers over the edge of a bookcase to watch Howell-Sickles at work. Chevy, the studio cat, livens up the setting, playing with his teddy bear. These inspirations, like magic, become smiles on those who view her work.

Chris McLarry of McLarry Fine Art in Santa Fe, New Mexico, has worked with Howell-Sickles for more than 25 years, so long, he says, he considers her family. “Donna’s work has always been uniquely her voice and it comes from a place of integrity. Whether someone sees her work for the first time or they are a seasoned collector, her work evokes an emotional reaction and produces a smile.”

These days Howell-Sickles is busy getting ready for several museum shows: a solo exhibit at the Steamboat Art Museum beginning in June, and in August, one at the Museum of the Southwest in Midland, Texas, titled Sculptors Who Paint. In addition, McLarry Fine Art in Santa Fe will host a show of her new works this fall.

The Booth Western Art Museum in Cartersville, Georgia, also has plans for a major exhibit of her work next year, January 16 through April 27. Seth Hopkins, executive director of the museum, addresses the Howell-Sickles exhibit: “We believe Donna is one of the most important artists portraying Western subjects in a contemporary style today. She uses her familiar cowgirl subjects to tell universal stories of human emotion and interaction. Her distinctive approach makes her work instantly recognizable, which we believe sets her apart from many of her peers. We look forward to sharing approximately 35 of her best works with our audience and hearing their responses,” he says.

Until then, Donna is content to paint in her studio, bathed in light, surrounded by color and the things she loves, with a view to the town she has made her home. 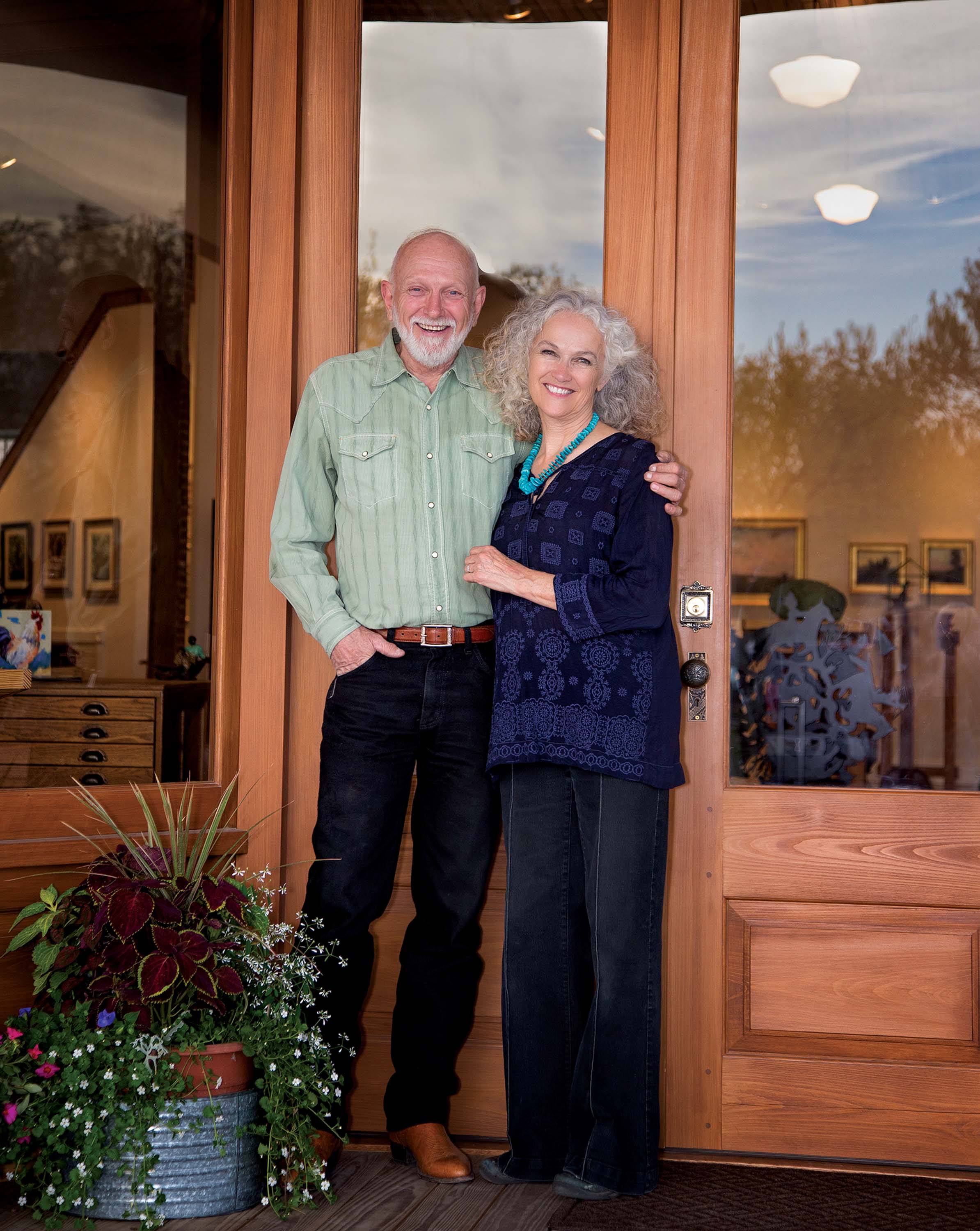 Artist Donna Howell-Sickles and her husband, John, are rebuilding downtown Saint Jo, Texas, one building at a time. 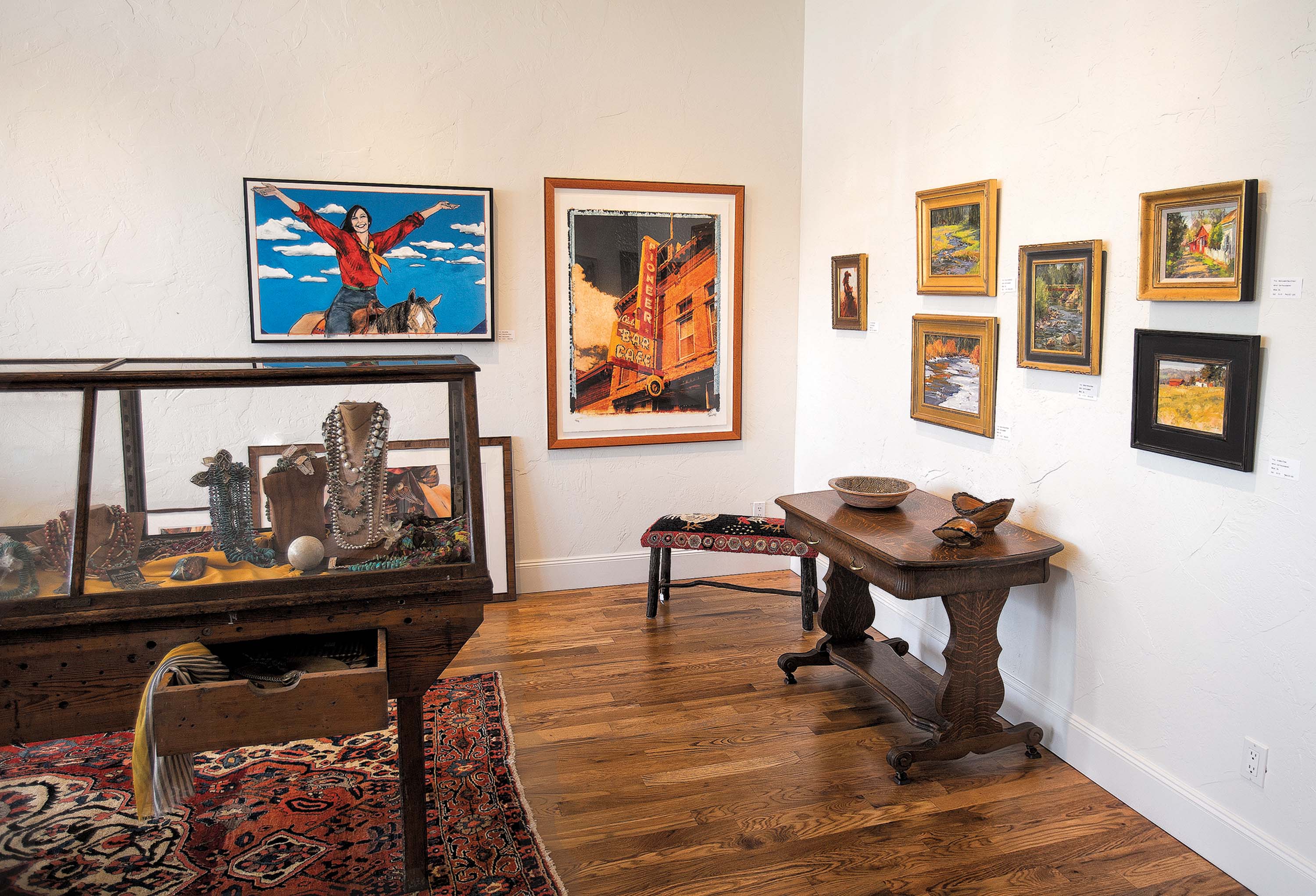 Some of the gift shop offerings are showcased in a display cabinet from the Old Meader Bros. Mercantile. 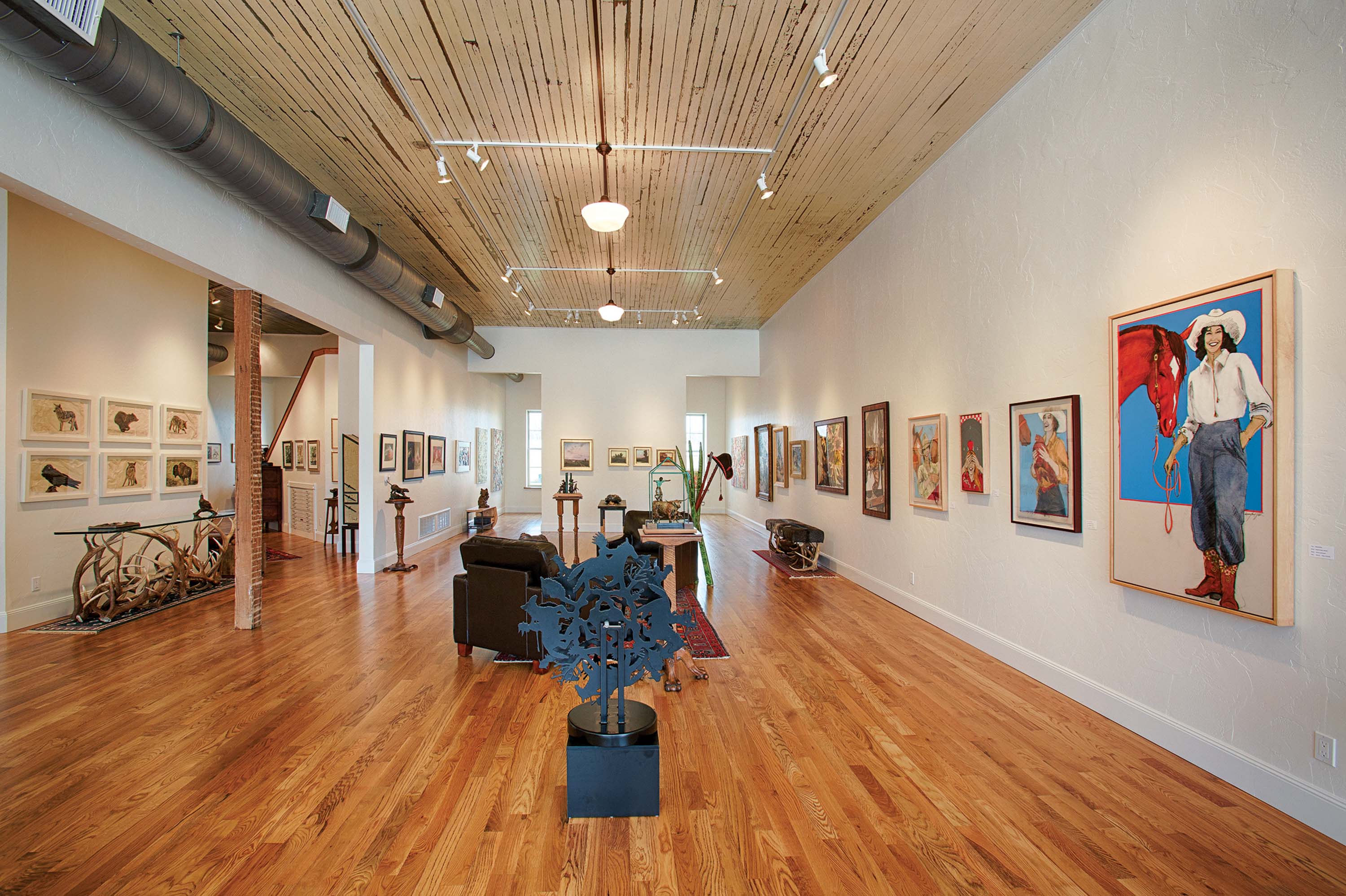 The Davis-Blevins Gallery is housed in the downstairs space, layers of paint on the ceilings were hand sanded and then varnished. 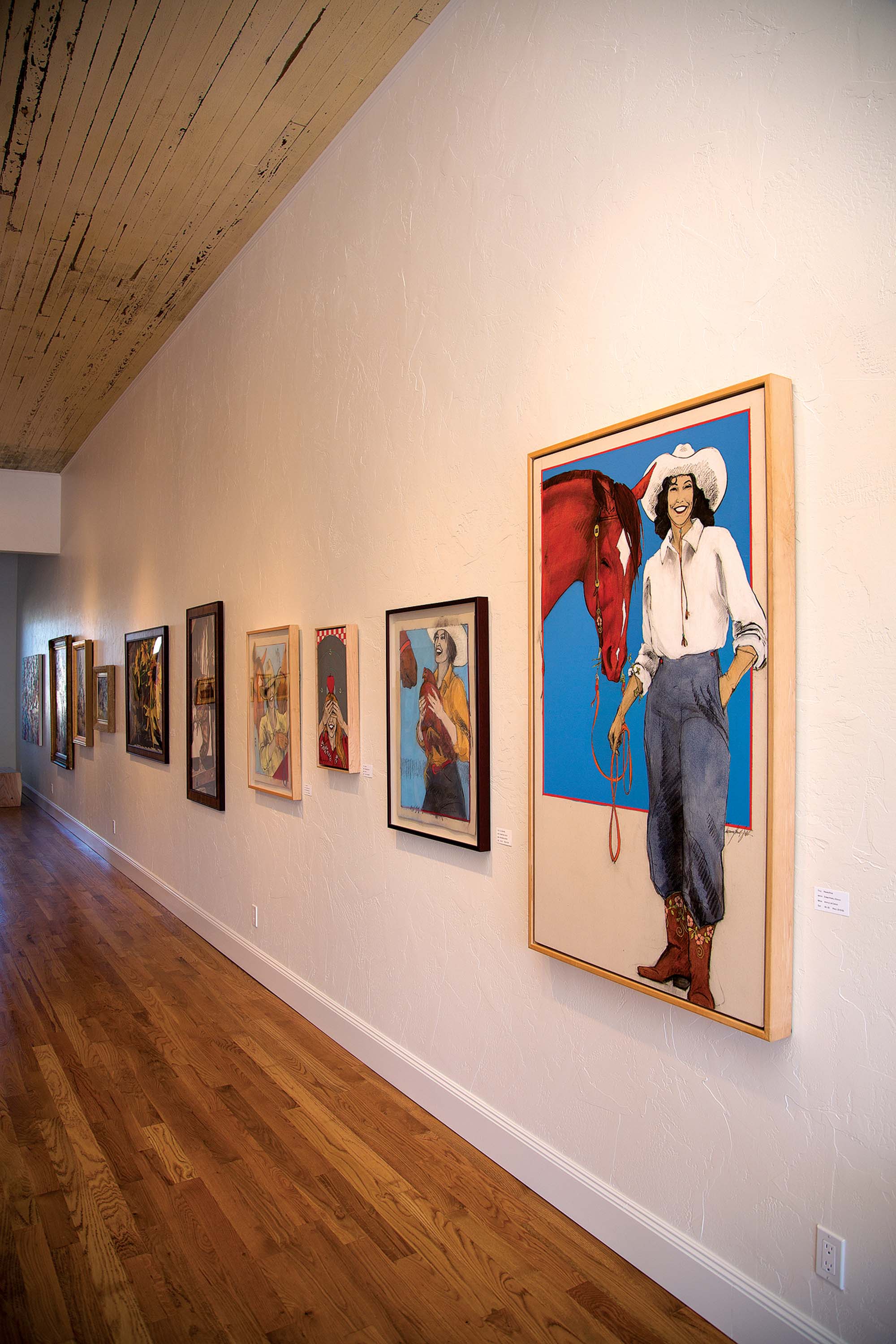 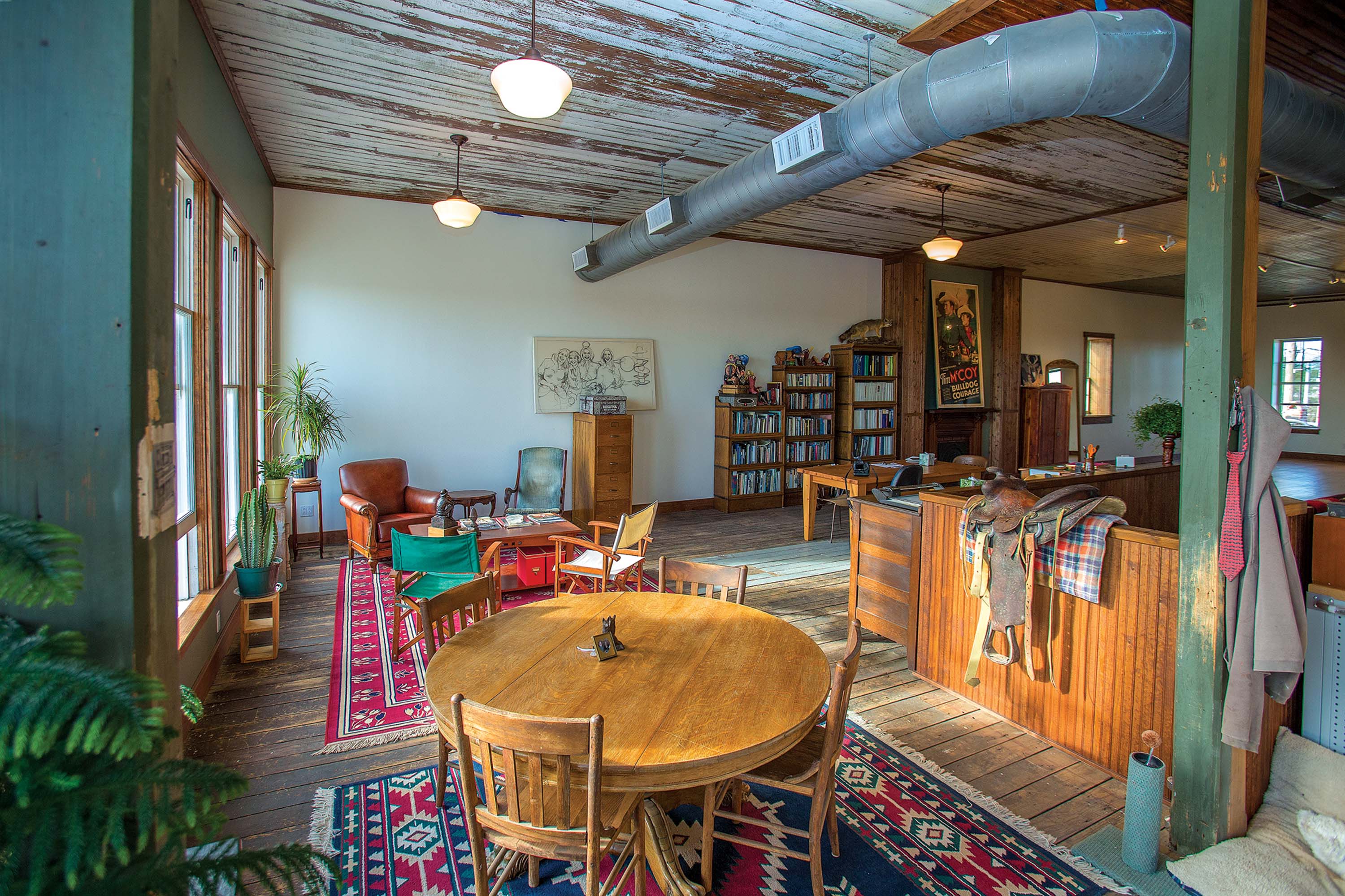 The front windows of the upstairs studio look out onto the town square. An antique mantle and antique attorney’s bookcases line one wall. 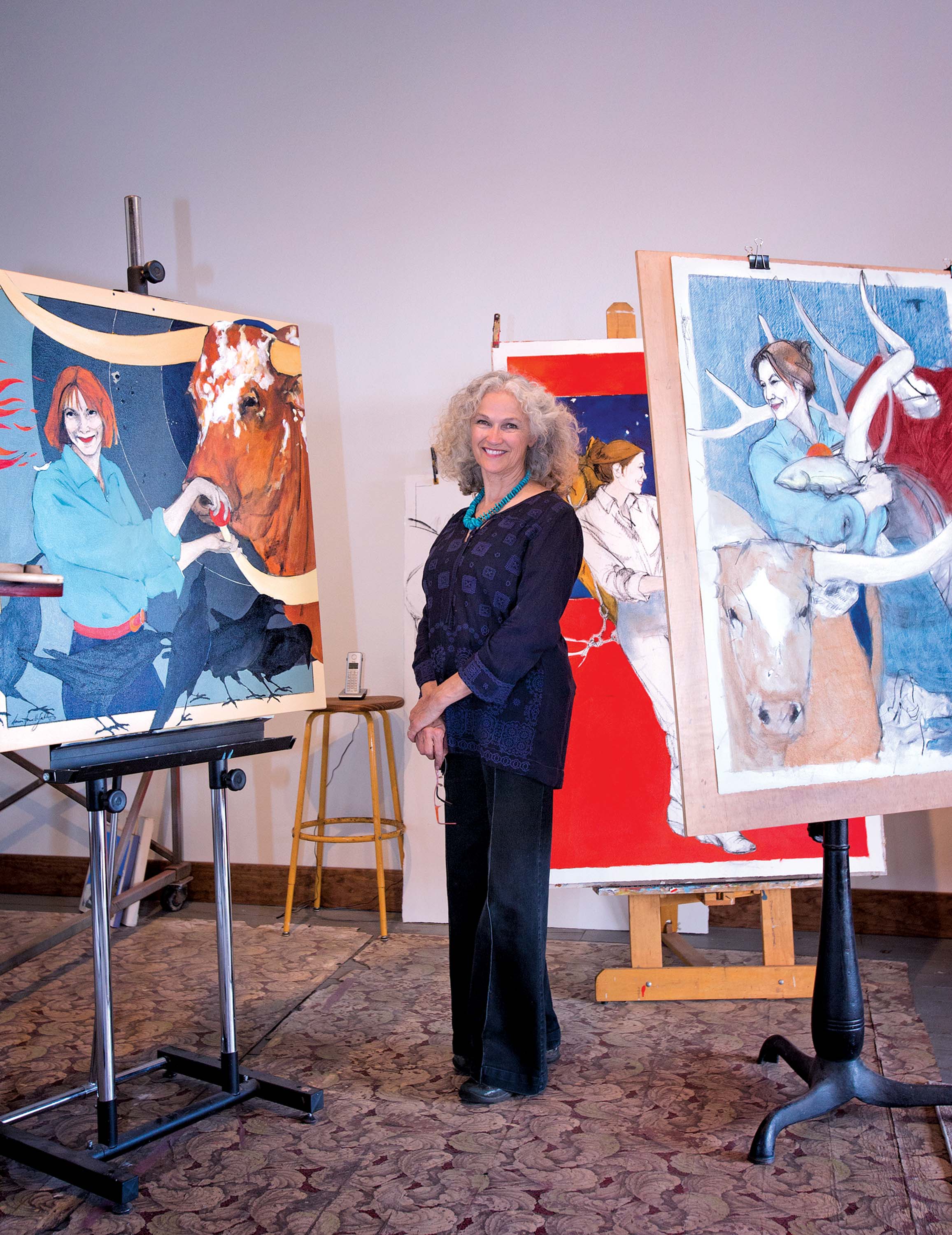 “The Thin Disguise”, a painting in progress, depicts a cowgirl with a horn weight in her hand.