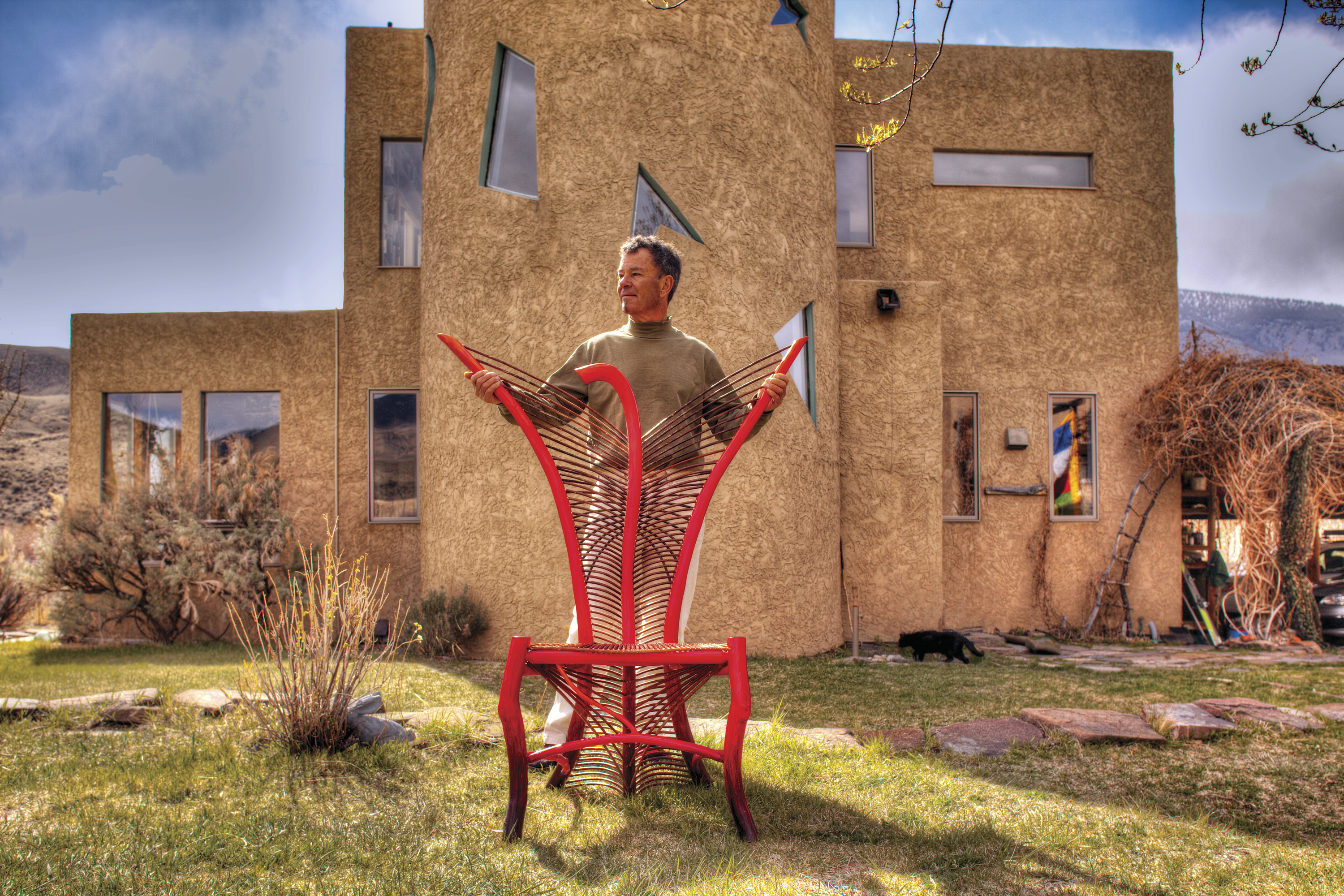 A lifelong outdoorsman, Don King has been a full-time furniture maker for 25 years. His signature technique combines a rigid Adirondack-type frame with a bent-willow seat and back.

01 Sep In the Studio: Don King

The Sawtooth Range. The Salmon River. The White Cloud Mountains. The Frank Church River of No Return Wilderness… The fabled names ring like a siren call to wilderness devotees. For them, simply hearing the words conjures vivid images of jagged peaks, high-altitude snowfields, free-roaming elk, wild horses, and roadless vistas. These legendary slices of pristine nature, crowned by the mountains that march shoulder to shoulder across all of central Idaho, are what lured Don King to Challis. The craft he discovered there, a craft of and from the land, held him. A lifelong outdoorsman, King followed his heart and found his calling.

A full-time furniture maker for almost 25 years, Don King crafts chairs that are instantly recognizable, even though each is unique. His distinctive style, a melding of Adirondack and bent-willow techniques, marries form and function in a striking display. There is a grounded strength in the rigid frame, even when that frame is asymmetrical, and a lyrical movement in the bent-willow forms. There is a musicality in his work, in the multitude of perfect, repetitive arcing forms, and, sometimes, in the colors of the wood, which are naturally colored, but might also be painted or dyed. There is also a whimsicality, both in his beautifully ordered symmetrical pieces, as well as his quirky, angular works.

While both Adirondack and bent willow are rustic styles that speak to traditional Americana, King’s work has a decidedly modern look. “Indeed,” he allows, “a lot of my chairs are in very contemporary homes. People often buy them as sculpture. I have to convince them that they’re sturdy and functional as well.”

After two and a half decades building chairs, King has no trouble coming up with new designs. Often he lets the materials dictate the forms. But he’ll also conceptualize new forms or an idea for a series, and search out the appropriate pieces, twig by twig, on his rambles along the Salmon River. He developed a whole series of anthropomorphic chairs, which, despite not being functional, were immediately snapped up by collectors. His chair, Neurosis, was depicted having a nervous breakdown. Another, called On Your Mark, Get Set, was down on its knees as if at the start of a race. It’s now part of the permanent collection of the Boise Art Museum where, in 1994, King was the subject of a one-man show. Currently he is at work on a geometric chair with rainbow colors; each twig is painted separately by hand. He also makes maquettes, tiny chairs small enough to hold in the palm of one’s hand, using toothpicks as dowels. Collectors love them.

King grew up in Colorado, and earned a degree in environmental biology at U.C. Boulder. As soon as he discovered the promise of the Idaho wilderness, he moved north. While working as a range botanist for the U.S. Forest Service, he lived in a tepee alongside the Salmon River. Once ensconced, King realized that he would need somewhere to sit. He signed up for a chair-making workshop in Ketchum.

“I thought a chair would be nice in my tepee. I never expected to make more than one,” he says with bemusement. Within two years, King was making furniture to sell; soon after that, he quit his regular job. “The transition to full-time was sudden,” he recalls. “I was selling a few pieces on the side, I was enjoying it, and my tepee couldn’t hold any more.”

The early chairs were classic bent willow of the front-porch variety: graceful, curved-back chairs made of long sticks bent while still green and moist, screwed together and dried into shape. “It was conventional stuff — nice, but not fancy. I was doing well with production work, but I wanted to get more creative. The chairs were pleasant,” he adds, “but not one-of-a-kind.”

Influenced by Adirondack style and the work of furniture maker Daniel Mack, and by the bent-willow designs of Clifton Monteith, King developed his own hybrid technique. It combines a rigid Adirondack-type frame using mortise-and-tenon joinery with a bent-willow seat and back. The frame, he says, “might be whimsical, or asymmetrical, but it’s rigid. Then, instead of branching things, I use willow.

An Adirondack willow chair is probably way more comfortable than an Adirondack chair, and the willow gives it smoother, more flowing lines.”

King’s home along the Salmon River, where he lives with his wife, Polly, is well located for wood-gathering as well as backcountry pursuits. “We love going backpacking and backcountry skiing,” King says. “Challis is central to so many different mountain ranges and we go up into all of them.” Willows grow in profusion along the river and irrigation ditches, and, thanks to the area’s light snowfall, can be gathered year-round. This is fortunate, as the artist needs as many as 60 small fine shoots for one chair seat. “I’ll go to a willow stand with young shoots and cut a set of willows that are similar in length and diameter, are nicely ordered and consistent,” King explains. “Then I’ll repeat the process for the back and the arms.”

In late spring/early summer, King gathers mountain maple. “I collect it when the sap is coming up, then I strip it. I look for interesting shapes and forms, then I put it to dry slowly, so they won’t crack. Sometimes the shape informs the piece; sometimes I’m looking for a particular shape.” He also collects interesting roots, which he’ll employ as chair arms and backs. He sometimes brings back woods from his travels, but most of his materials are gathered with his own hands, very close to home.

As an environmental scientist, King is cognizant of his impact on the land. “I know my footprint, and my work is very much ‘green,’” he says. “I go into a stand of willows and just trim out a few that appeal to me. You can’t tell I’ve been there. And I cut around irrigation ditches more than riparian areas. Ranchers tend to cut, so willows grow really evenly there. I tend to find just what I need.”

From these humble, sustainably gathered materials, Don King produces one-of-a-kind artworks, some with as many as 150 hours of labor in them. Each chair is a representation of the mountains it came from, and each carries with it a whisper of wilderness.

Chase Reynolds Ewald is an editor and author living in Northern California. Her most recent book, The New Western Home, was released in 2009. 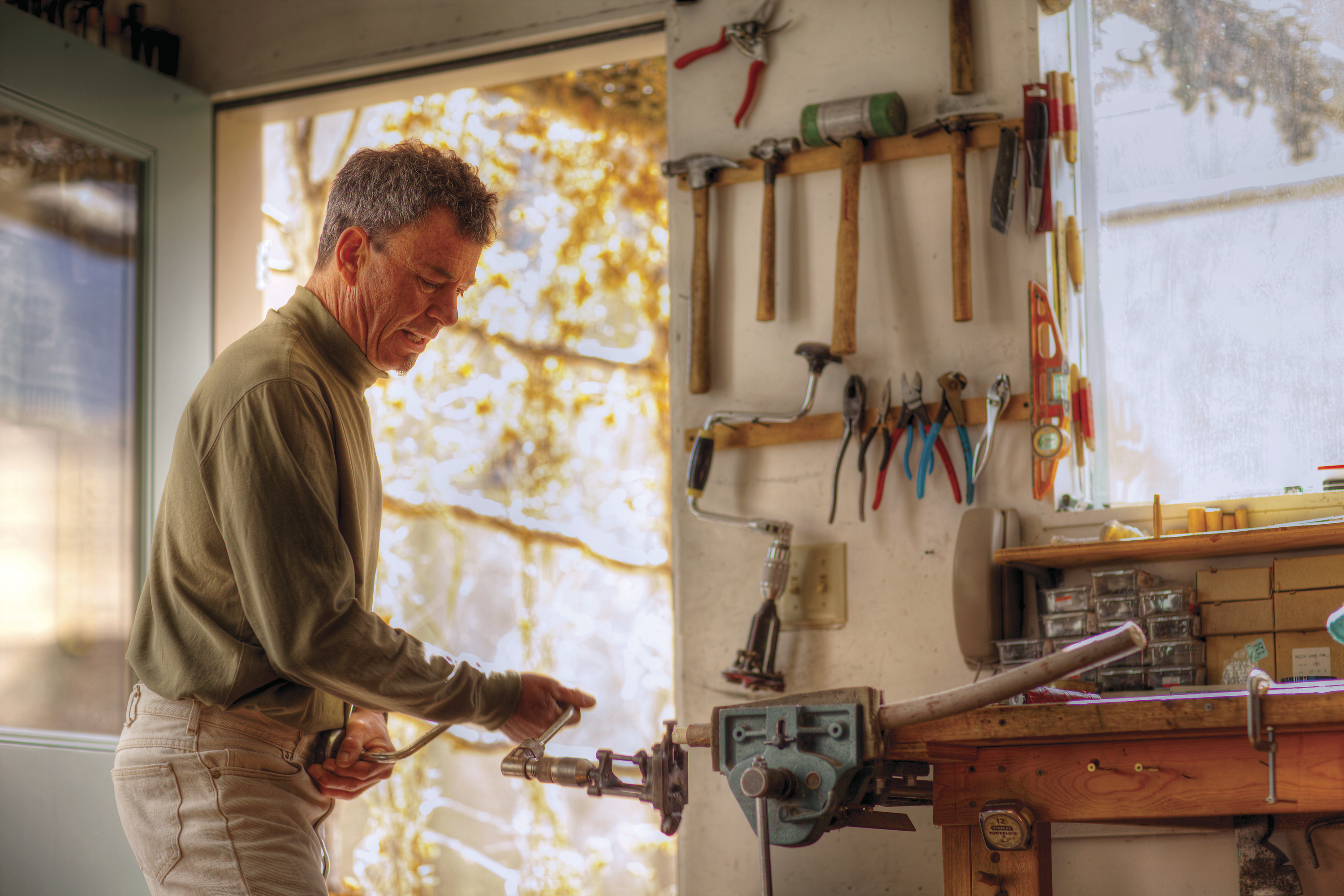 The artist works in his studio, often spending more than 150 hours on one chair. 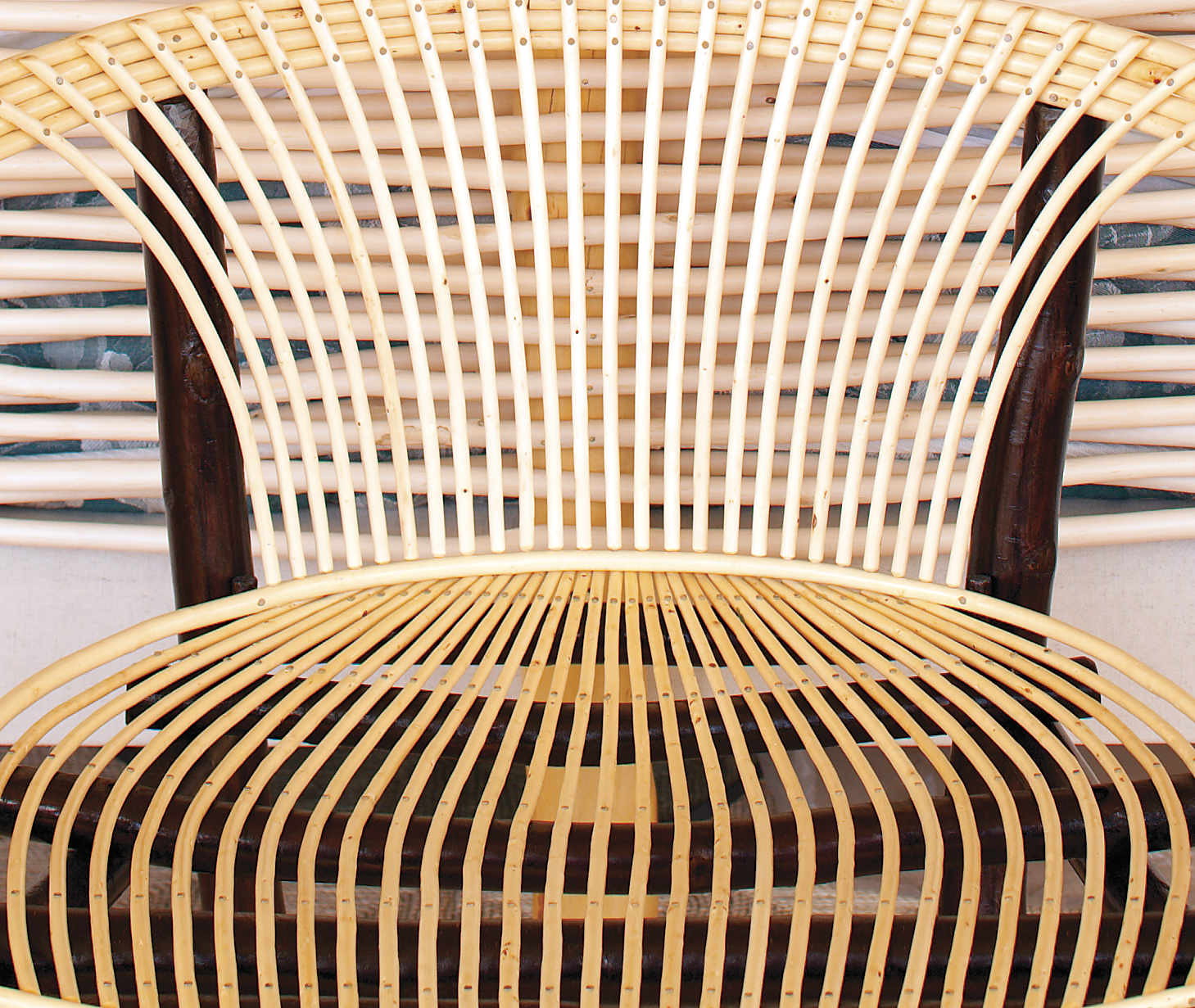 King often requires as many as 60 small, fine willow shoots for a single chair. 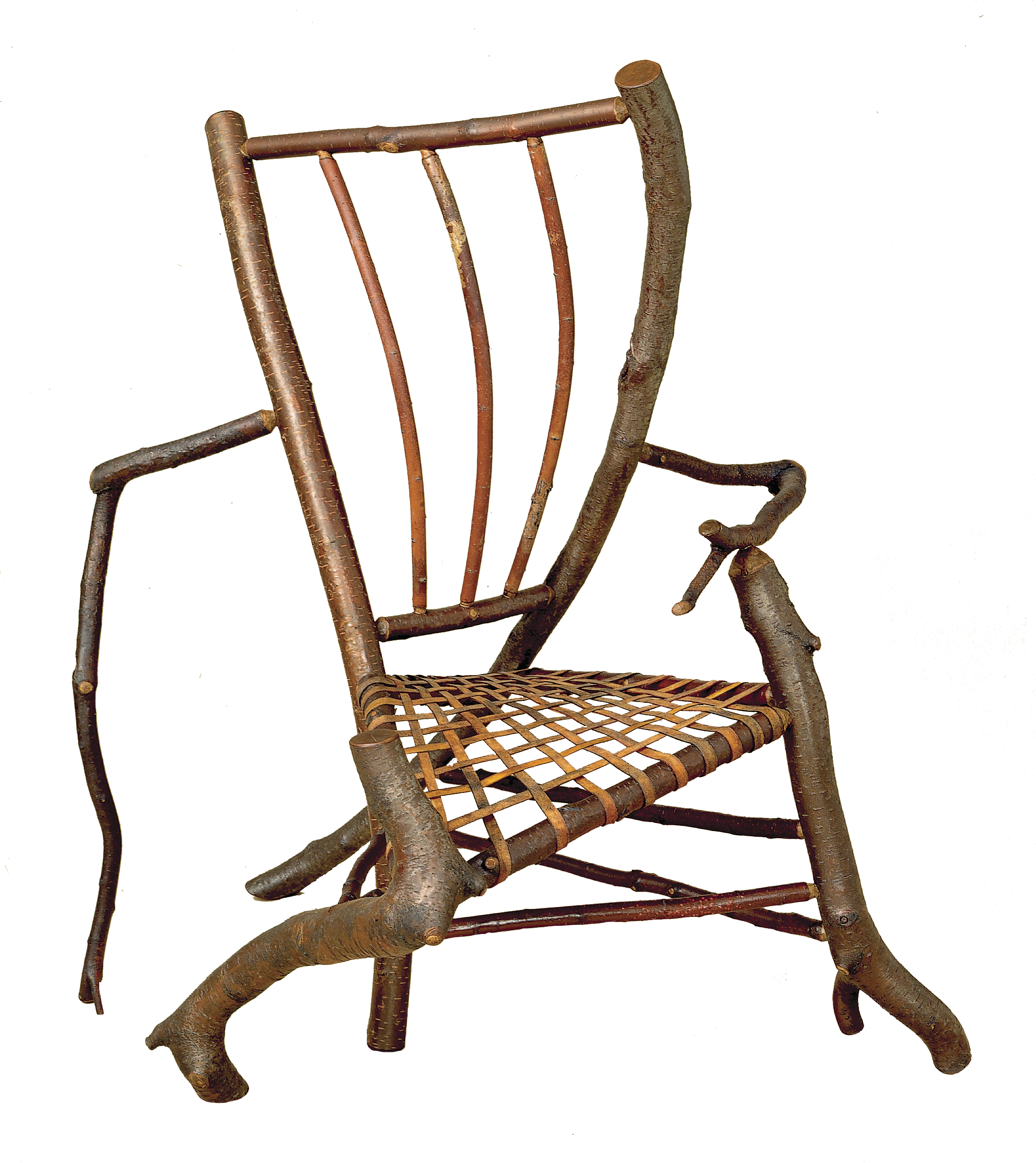 His asymmetrical and marvelously angular work, On Your Mark, Get Set, is made of red birch, willow and rawhide and is in the permanent collection of the Boise Art Museum. The chair mimics a racer, down on one knee, preparing to launch. 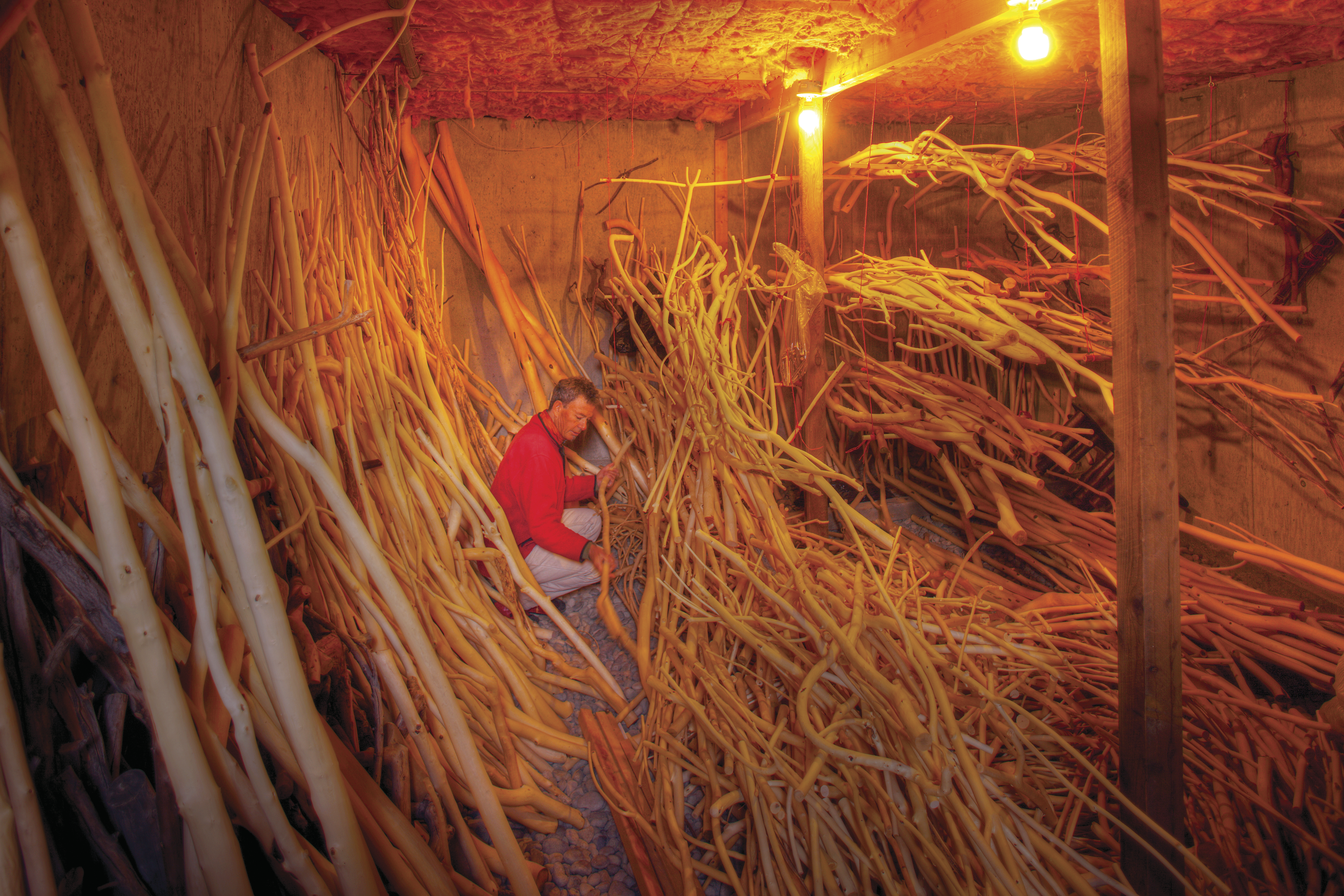 King handcrafts each chair from materials he gathers along rivers and irrigation canals.