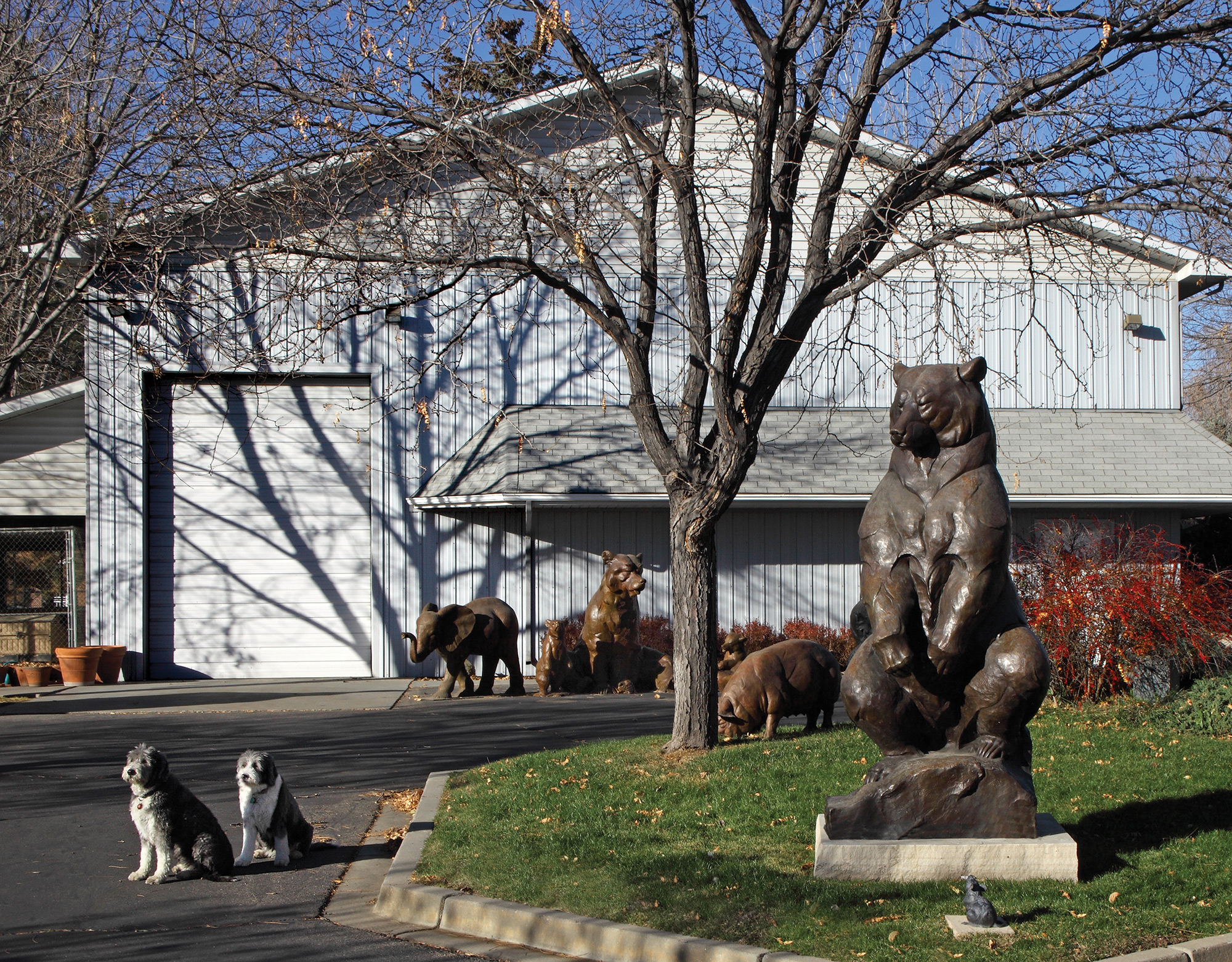 Ostermiller is known for conveying expression in his artwork, such as the gentle command of this grizzly bear sculpture, "Ursus Monument."

11 Jan In the Studio: Food and Fine Art

Two animated bearded collies provide a homey welcome for visitors entering Dan Ostermiller’s art quarters in lower downtown Loveland, Colorado. This shaggy breed, known for its ability to blend herding duties with playfulness and human companionship, are the darlings of the artist’s studio.

Ostermiller’s legacy sculptures, depicting his deep connection with wildlife, nestle unassumingly in the property’s landscape. Ursus Monument, an ardent looking bear, stands guardian as aromatic blooms and green foliage make way for the coming of winter. A treasure trove of fine art greets guests and the colder days with a distinguished confidence.

A chicken coop neighbors the entrance to Ostermiller’s creative space. When asked, “Are these your subjects or egg producers?” Ostermiller replies, “Both.”

Recognized for deftness in his artistic craft and an acute understanding of anatomy, which evolved from being the son of a taxidermist while growing up in Cheyenne, Wyoming, this great American sculptor has approached his animal subjects with insight and compassion for almost 40 years. From frogs to saddled horses to pigs, cows, rams and bears, he creates animal figures in context with their natural surroundings, imbuing his sculptures with both realism and personality.

Many are familiar with his expressive artwork, which resides in museums across the country, such as the Crystal Bridges Museum of American Art in Arkansas, the C.M. Russell Museum in Montana, the National Museum of Wildlife Art in Wyoming and the Leigh Yawkey Woodson Art Museum in Wisconsin, among many others. But few realize Ostermiller’s extraordinary and celebrated talents also transcend to another love, the culinary arts.

His passion for cooking began with a trip to Florence, Italy. He took the excursion with Richard Matteucci at the suggestion of Matteucci’s wife, Nedra, a gallery owner who represents Ostermiller’s work in Santa Fe, New Mexico. Together, the two men studied under Italian chef Giuliano Bugialli and Italian-born culinary expert Marcella Hazan, “the Julia Child of Italian cooking.” That was more than 30 years ago, and Ostermiller has since traveled the world as a foodie and culinary arts student, spending time in Paris to sculpt and cast as well.

“Italians believe you don’t set a menu until you see what’s fresh first,” he says. “Excellence in cooking is all about the quality of ingredients.”

Elucidating his culinary process, he compares the methodologies to that of his sculpting. “I know ahead of time what I’m going to create. I see it in my mind. At first, it’s structured. I have everything lined out and ready to go. Then I play with it. I make it my own. That’s when it’s called art.”

It didn’t take long for Ostermiller’s sculpting to fuse with his cooking. Next to his stove resides Pork Bowl, a polished stainless-steel pig with a hollowed back for storing sea salt. The incurvate belly of a recumbent bear, Resto Cuchara, acts as a spoon rest, and elephant candelabras deliver a cozy ambience.

Ostermiller’s recipes often culminate at the eight-person table in his studio, and an artistic feast is a popular auction item at the charity fundraisers he supports. Outside, the property’s acreage can accommodate larger groups. “We once had a holiday party with a live band at 10 degrees above zero and cooked pizzas in the wood-fired oven. The featured pizza was ‘Reindeer Road Kill.’ It was made with thinly sliced New York strip,” he says, cheerfully reminiscing about the evening.

Ostermiller’s most valued instrument for sculpting is his serrated loop tool, but the soul of his cooking comes from his outdoor wood-fired oven. He speaks of it with a masculine and primordial admiration, having great respect for its elemental attributes. “I’ll get it going in the afternoon,” he explains. “Later that evening, I’ll cook pizzas or lasagna. Then, I shut it down and bake bread the next morning.”

In 2016, Ostermiller offered his studio for another unique event, a grass-fed beef tasting. “I guess you could think of it like a wine tasting,” he says. “Beef producers brought in their own chefs, and they all cooked the same item. The tasting profiles were based on things like how long the beef was aged or what kind of grass the cattle ate.”

While he singles out risotto as a preferred dish and, as a pastime with friends, he makes 300 pounds of homemade Italian sausage, the French method of sous-vide also intrigues Ostermiller. The care involved with slow cooking meat in an airtight bag floating in controlled water temperatures requires the type of precision and gentleness the sculptor is acclaimed for in his artwork.

When asked if Ostermiller would give up sculpting to be a world-renowned chef, he modestly replies, “No. I’m not qualified. I do love being in the kitchen, but I remain in awe of real chefs.” No doubt those same chefs would have a comparable remark about Ostermiller’s illustrious sculpting career. 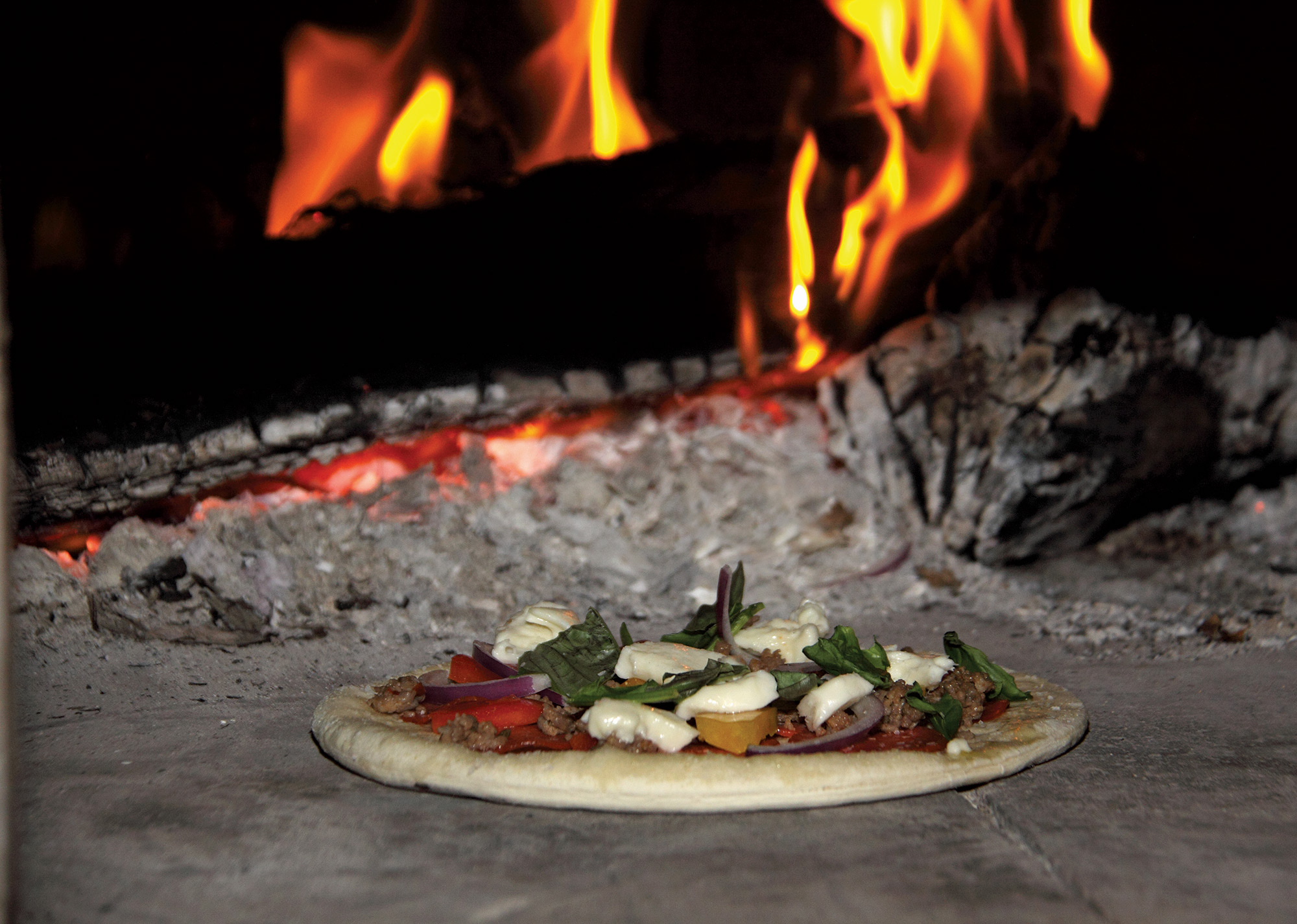 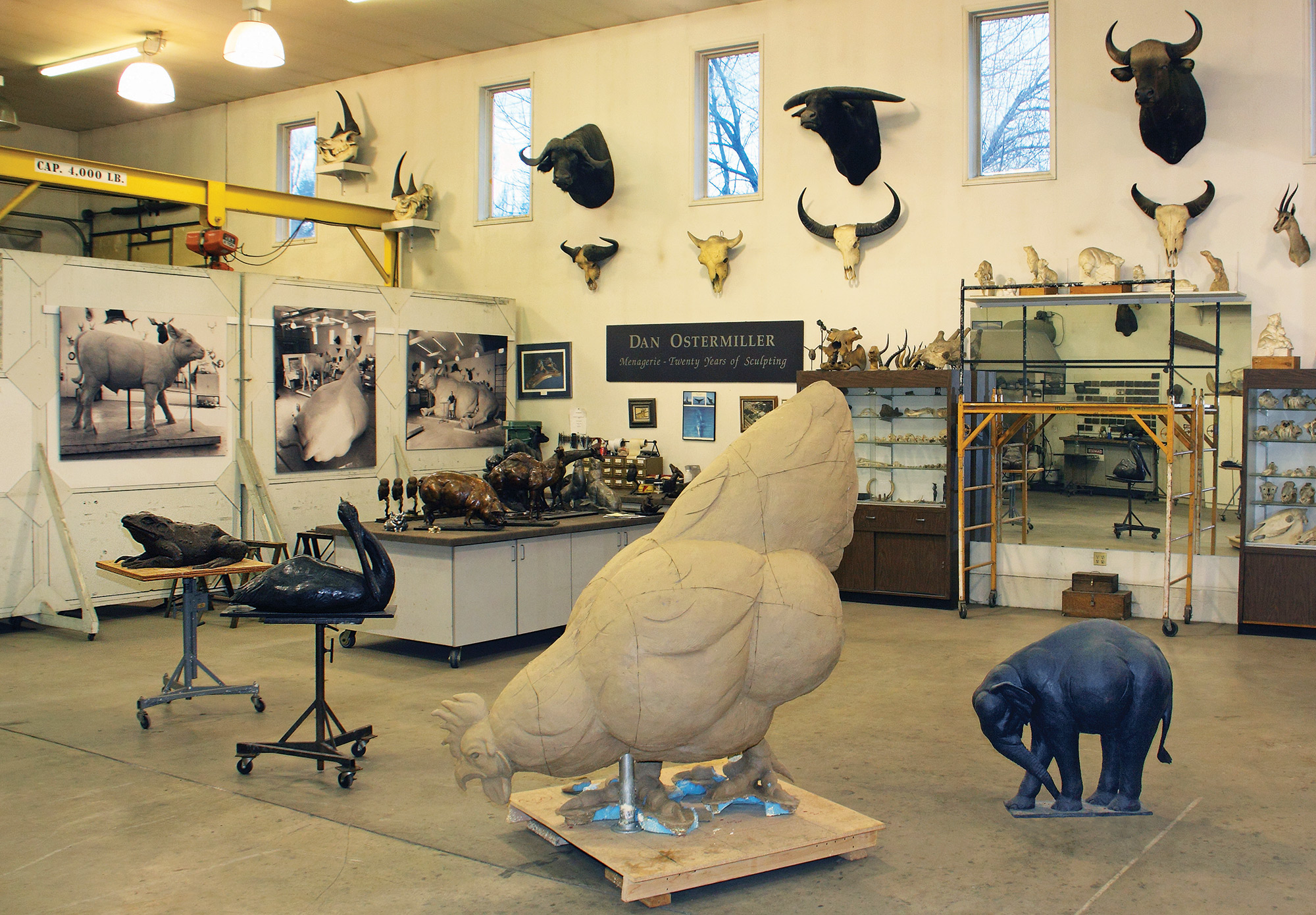 A sizable space on the roughly 2-acre property is used for creating large-scale pieces. 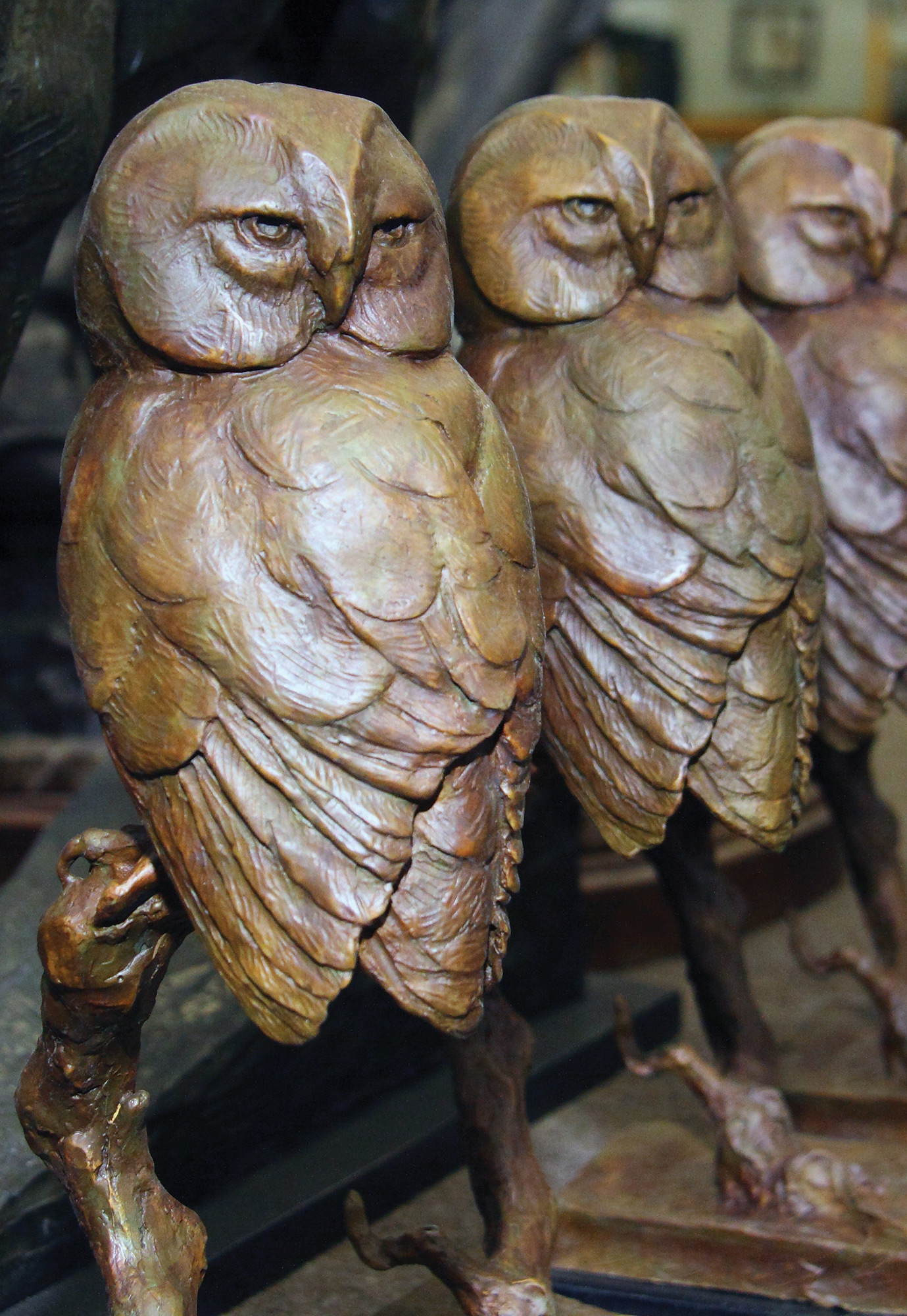 This parliament of owls is named “Peleadorsito,” or “little fighters.” 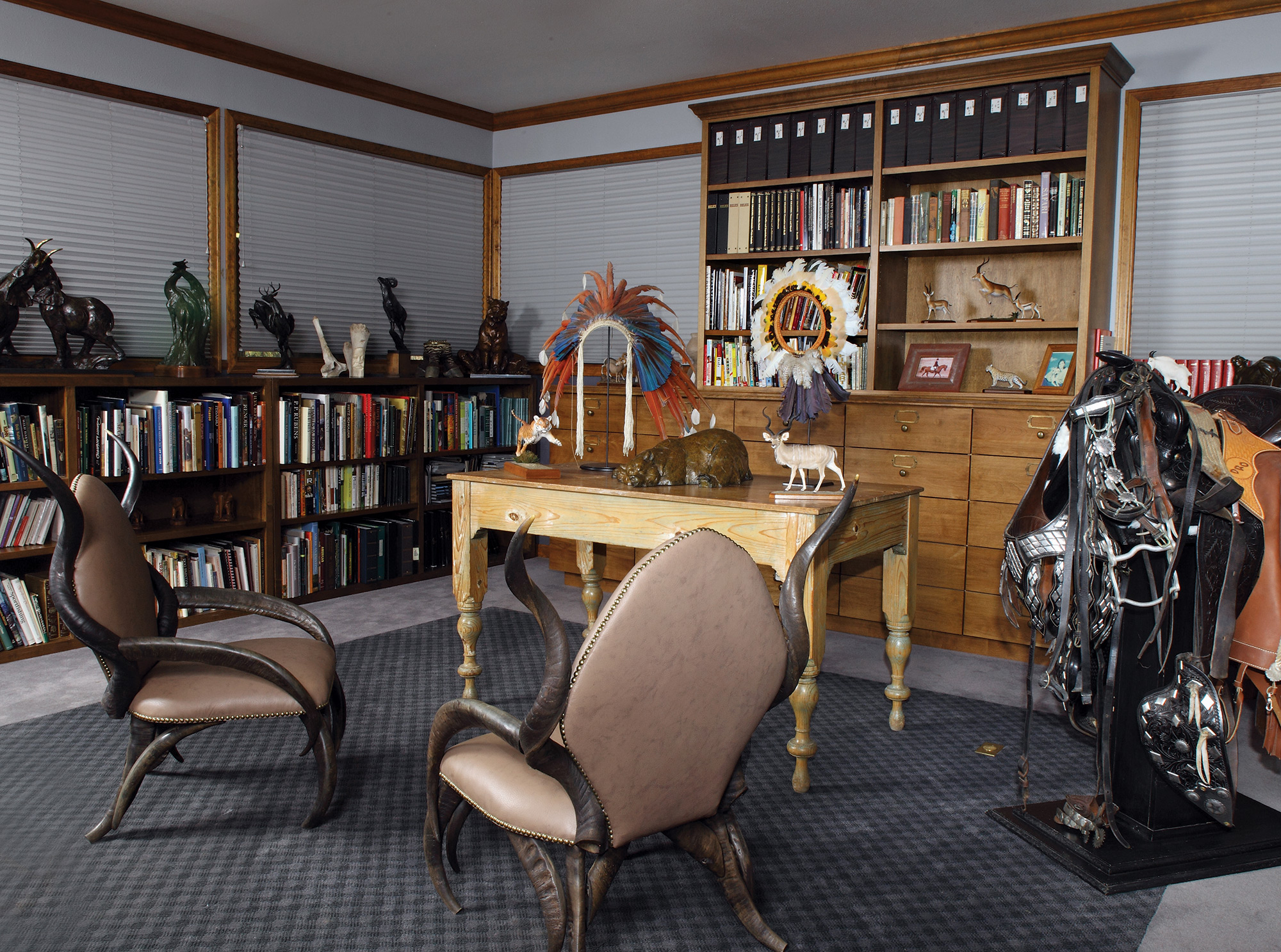 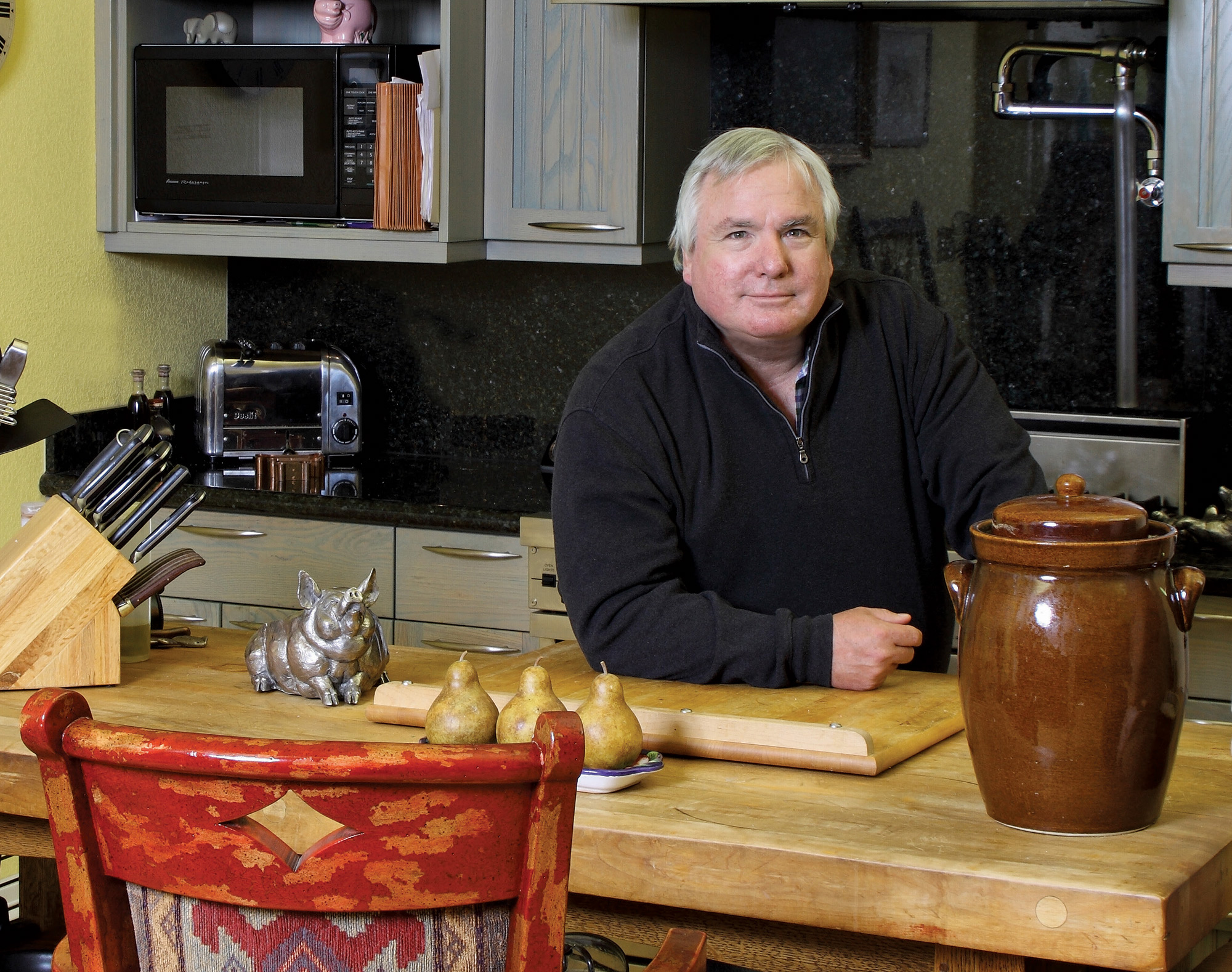 Sculptor Dan Ostermiller in his studio in Loveland, Colorado. 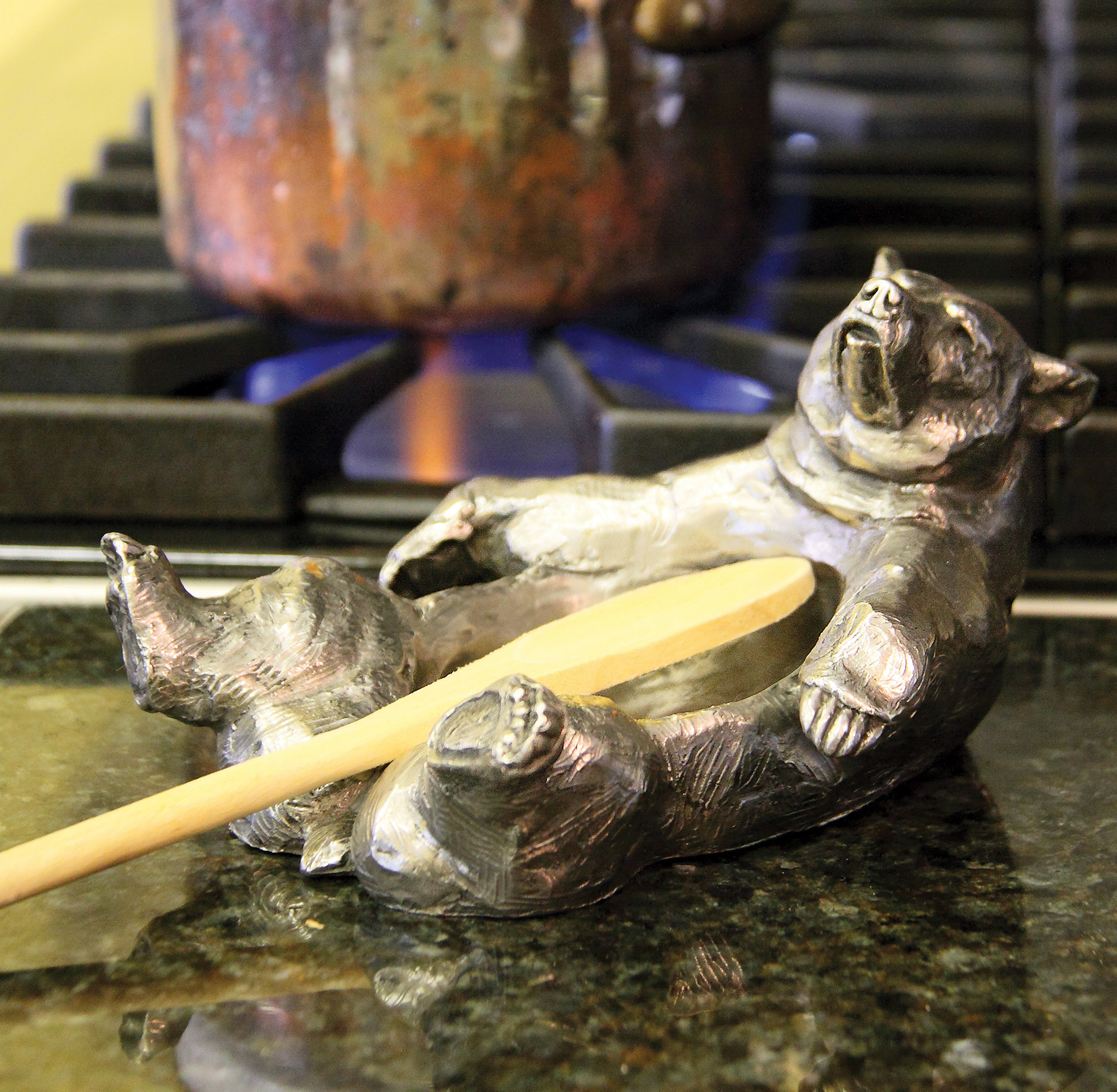 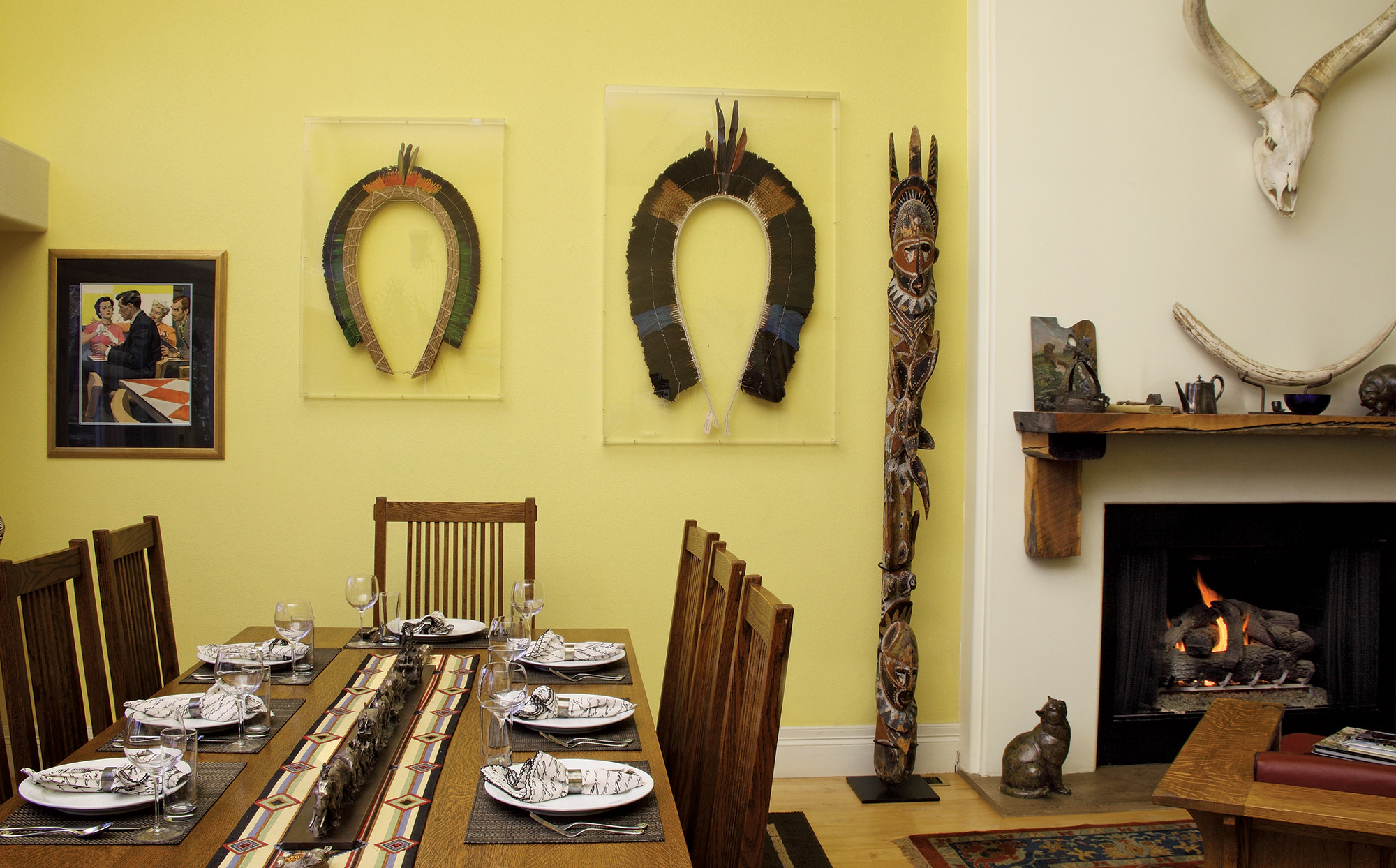 Ostermiller travels the world to study his subjects. 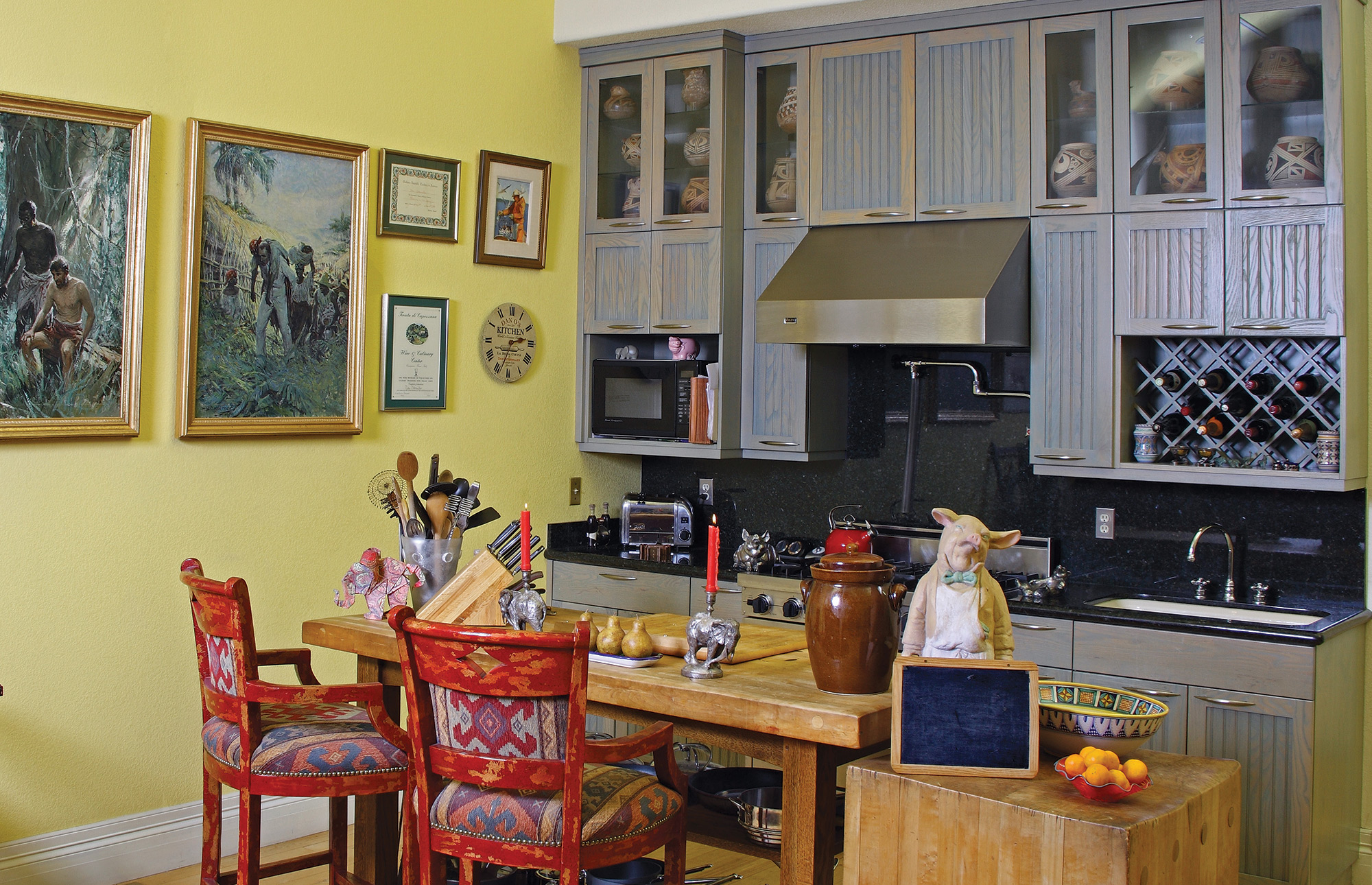 Half of the studio’s interior accommodates Ostermiller’s passion for the culinary arts. 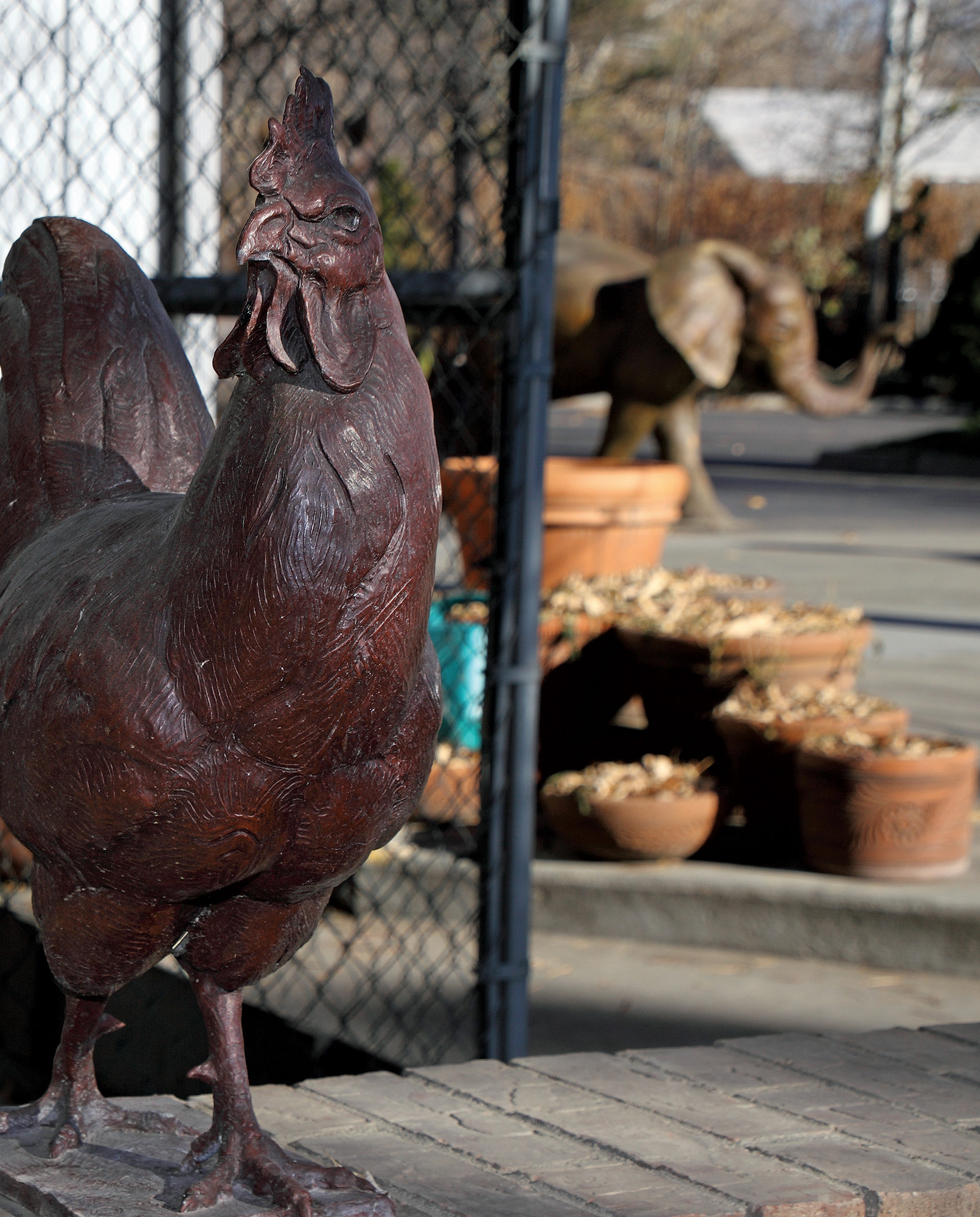 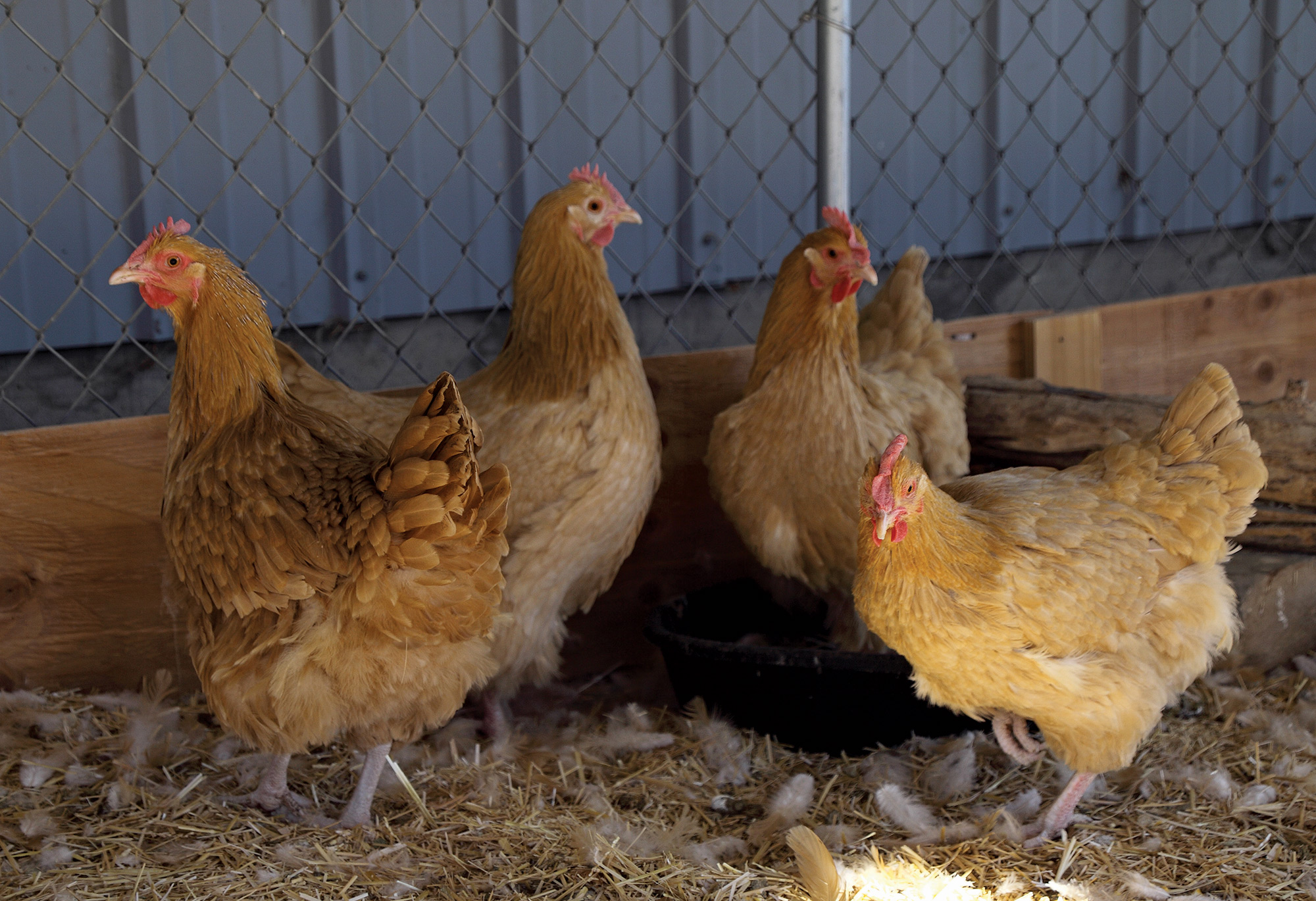 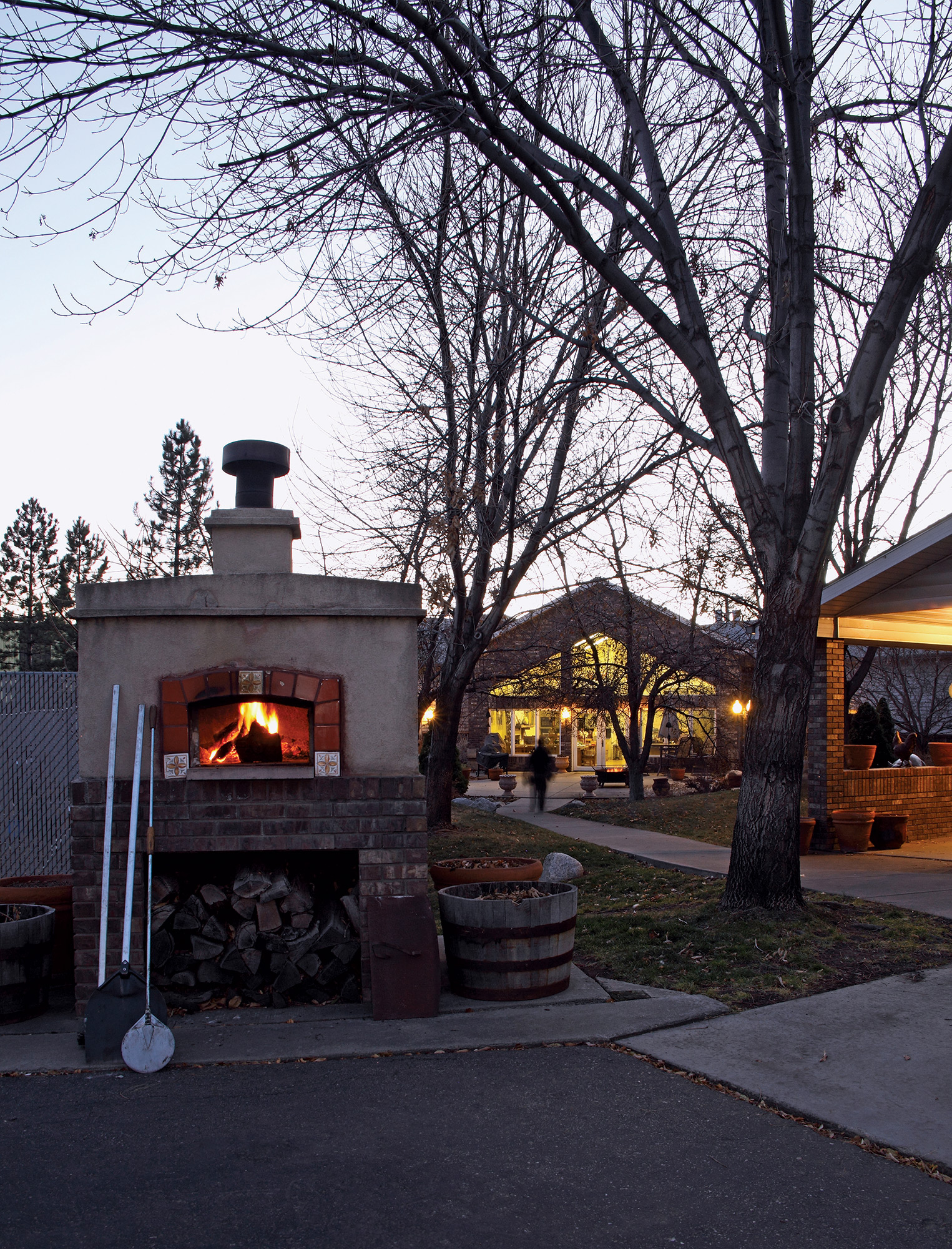 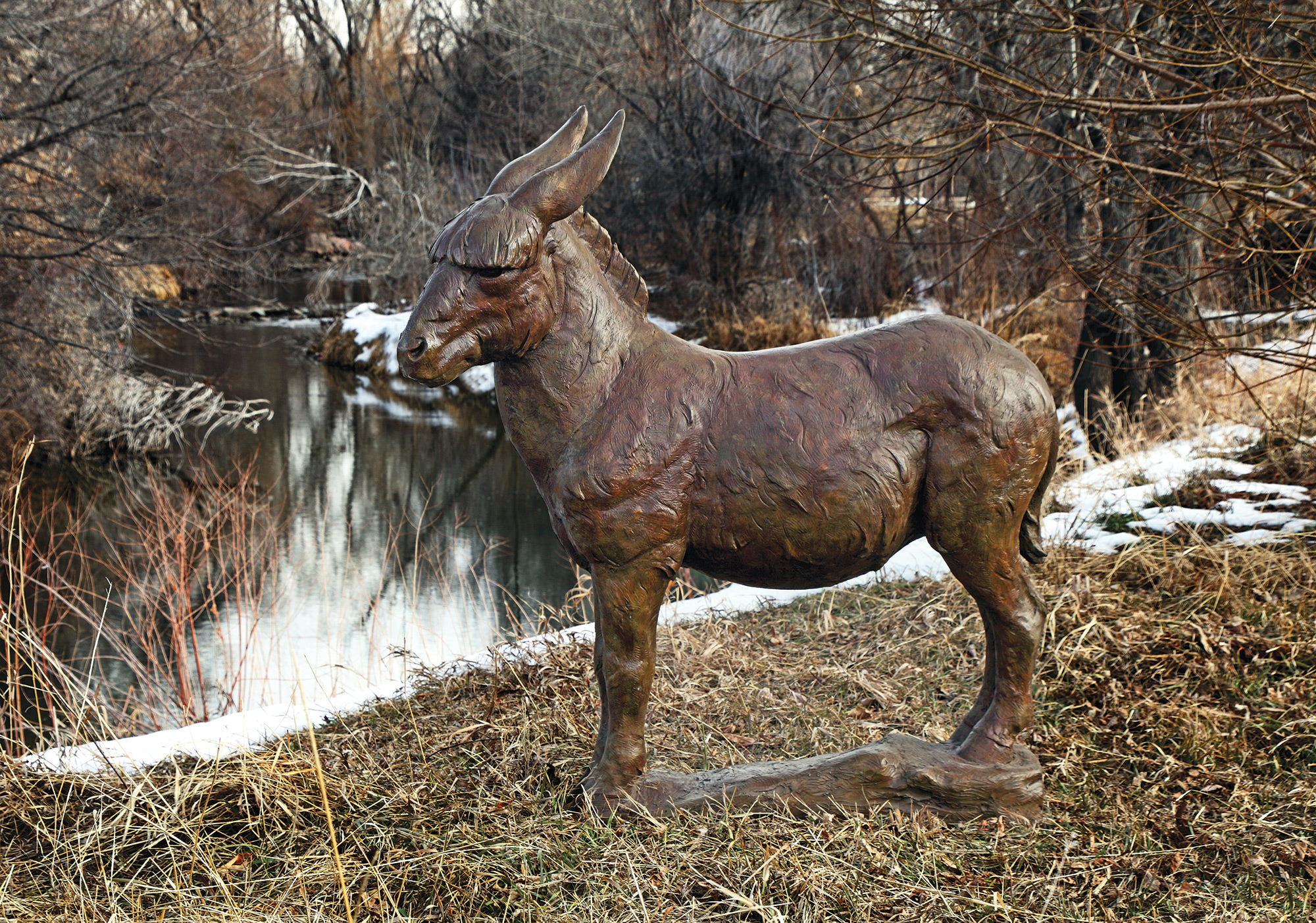 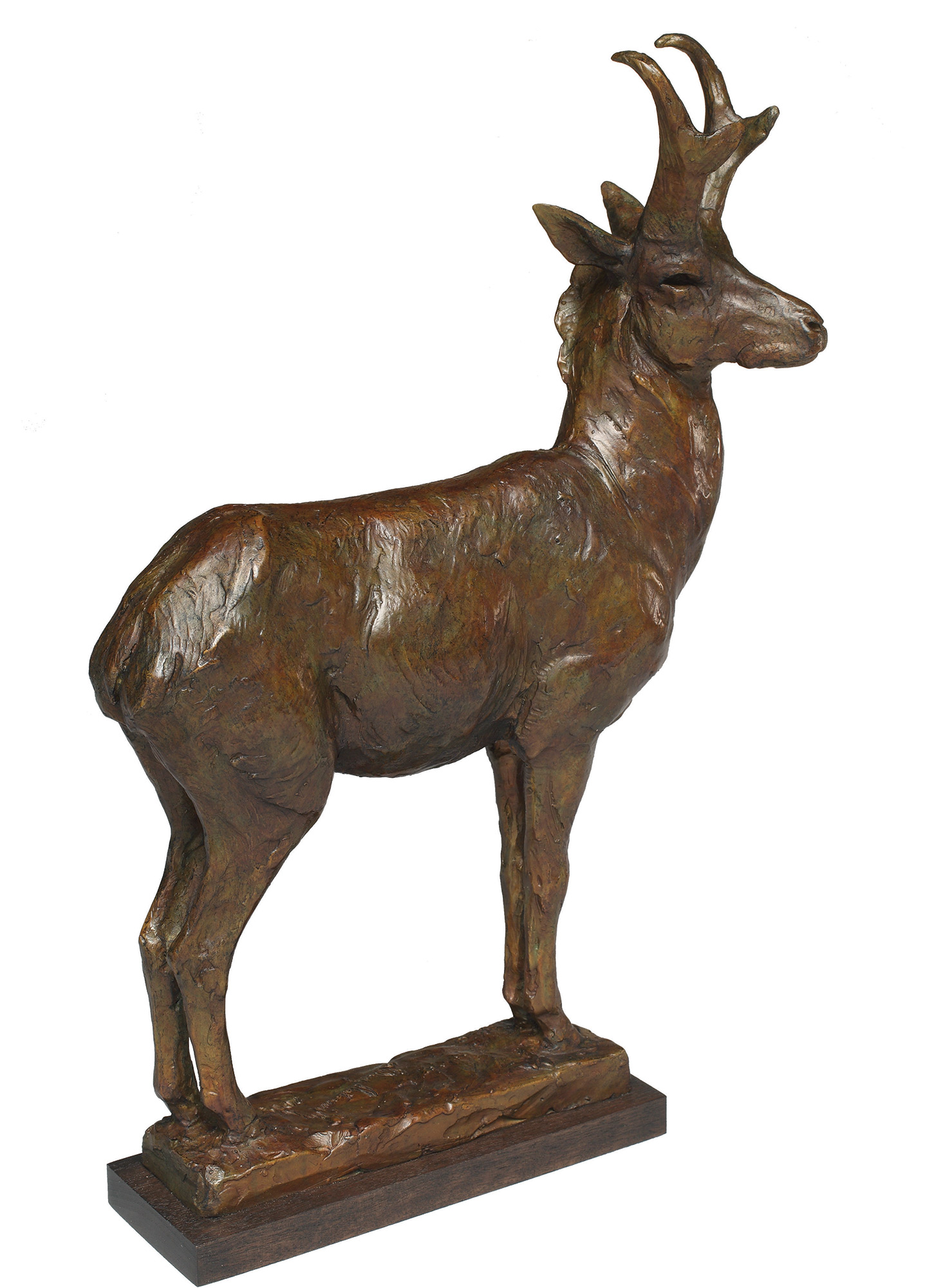 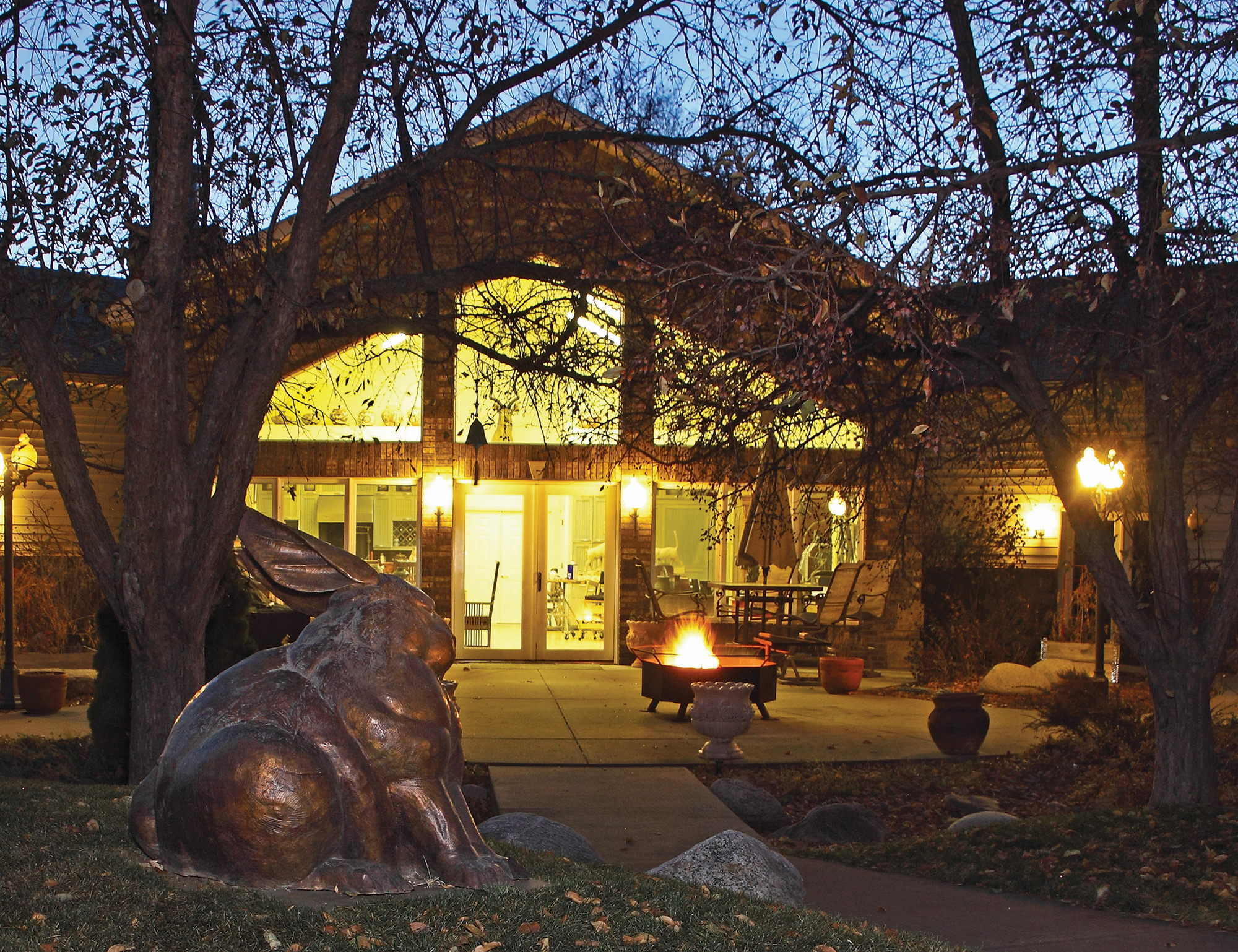 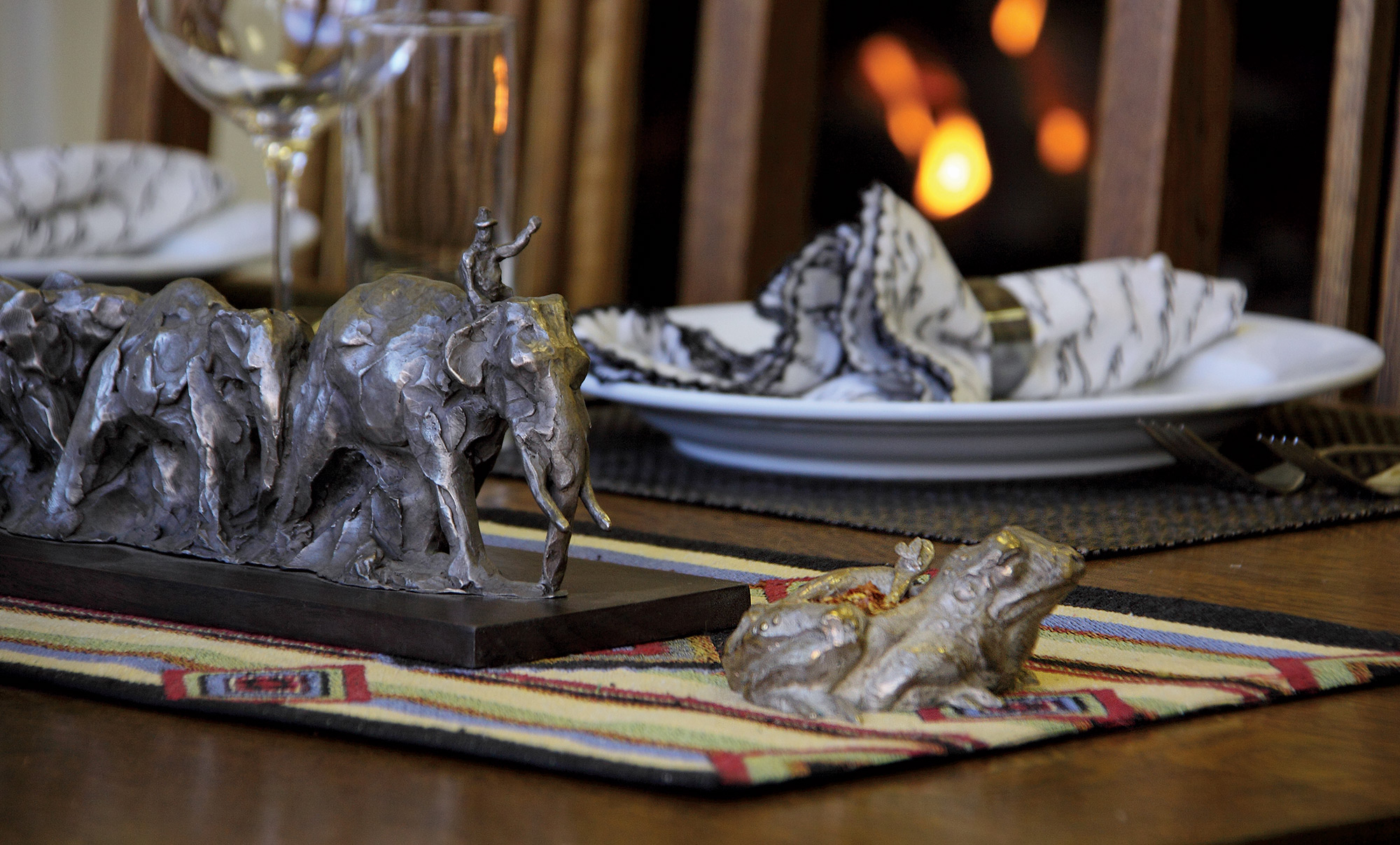 A herd of elephants, “Circus Parade,” is at the center of Ostermiller’s dining table in his studio.