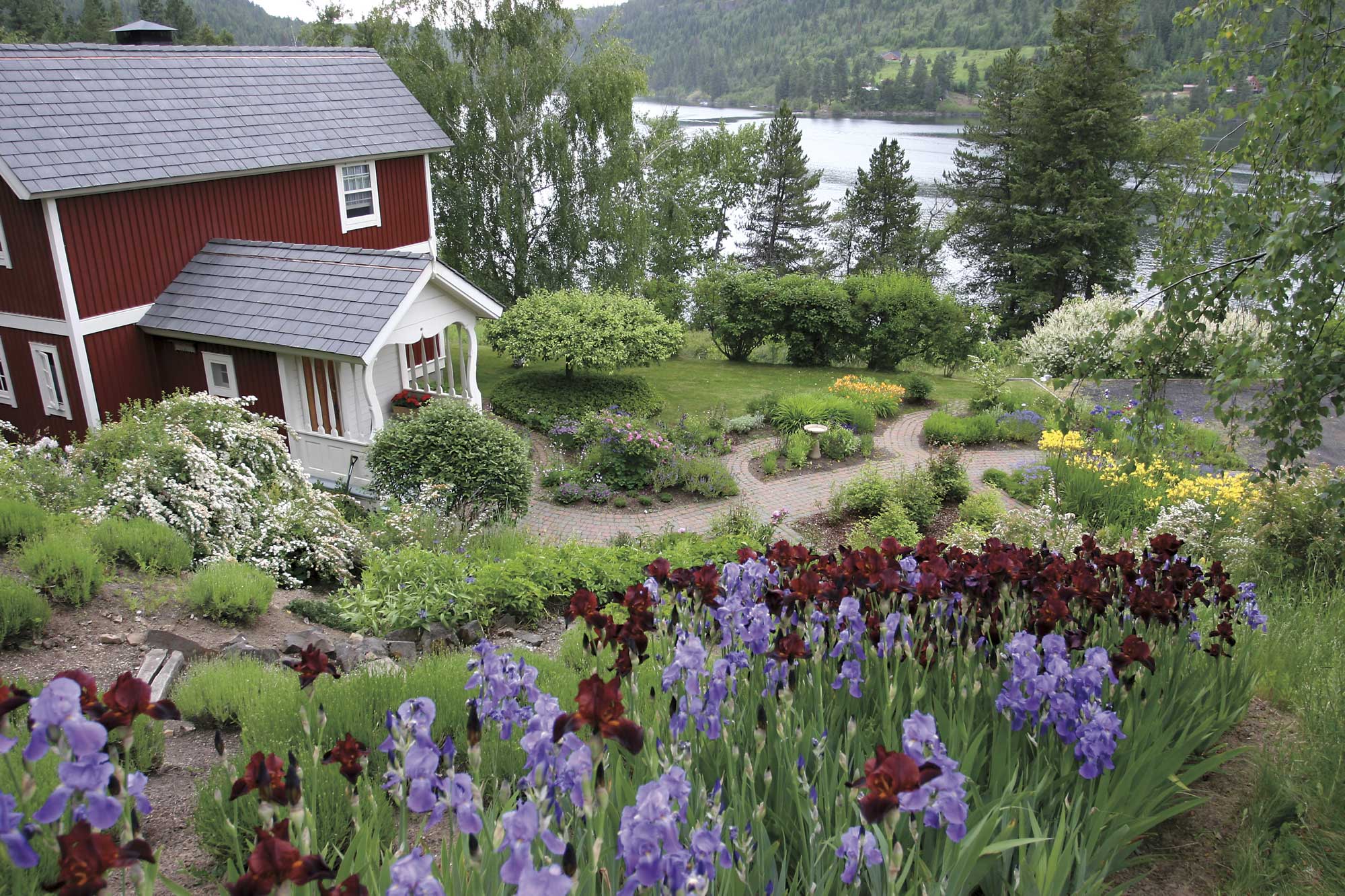 01 Sep In the Studio: George and Pam Carlson

Wending through a topographical mosaic of mountain forest and knitted farmland, the drive to George and Pamela (Gustavson) Carlson’s home is like a sojourn deep into the middle of an Ingmar Bergman film.

The Carlsons, denizens of the American West, inhabit the northern panhandle of Idaho, but their abode appears descended from simpler times in a distant province.

By design, it’s no accident their hand-hewn sanctuary exudes a strong Scandinavian mooring. The quaint Swedish Arts & Crafts-style home, painted Falu red, even possesses a name: Brannvin, which, in the language of the Carlsons’ ancestors, means “Water of Life.”

Indeed, flooding forth is a panorama of subtle sightlines that Bergman — the late, legendary Swedish movie director known for conveying moody atmospherics — would have found kindred.

Set on a hillock above a quiet tarn that is amongst 300 miles of interconnected, navigable water in and around Lake Coeur d’Alene, the dwelling and expanse of wild property rising over it affirms the couple’s spiritual belief that great human art exists as a modest extension of nature.

Up a cobbled walkway past a rose garden that is itself accented with bursts of blooming perennials, flitting songbirds and butterflies, the tone of Brannvin is established pleasantly in the mudroom.

There, just inside the main entrance, stands an early 19th-century long case clock from the town of Mora in the Swedish province of Dalarna. It rests on wooden flooring milled at a local lumberyard and chimes beneath a grouping of spiked antlers presented in classic Old World skull mounts.

“Pam and I searched years before we found the right clock to fit this space,” George Carlson, the erstwhile and internationally acclaimed figurative sculptor says of prowling antique shops from Los Angeles to Stockholm. “I love its curvaceous shape.”

“Everything at Brannvin speaks to authenticity, to a fully functioning aesthetic that unites George’s artistic passion with a statement of personal values,” says wildlife sculptor Kent Ullberg.

A Swede by birth and upbringing before emigrating to the U.S., Ullberg is a reverential colleague of Carlson and knows well the magical appeal that Dalarna commands within his native psyche. Paying homage to one’s cultural roots, however, can be a tricky thing, Ullberg notes, drawing sharp distinctions between originality and pastiche, between the projection of genuine charm and kitsch.

“With the way Pam and George live their lives, as with the genius of his sculpture and painting, there is nothing frivolous or smacking of artifice,” Ullberg notes. “The convergence of history — human, geological and art — is for them no abstraction.”

Although Brannvin was completed in 1982, it feels centuries old. The Carlsons’ blueprint was influenced by an iconic reference point — the Dalarna residence of painter and interior designer Carl Larsson [1853-1913], a major force in the Swedish Arts & Craft movement. Larsson believed in combining tasteful ornamentalism with a rustic rural vernacular. He was a champion of the yeoman farmer.

Hallmarks of the style, currently enjoying a revival in Sweden, are architectural symmetry, prodigious incorporation of woodwork, a spritely color palette, hardy furniture and folksy yet elegantly patterned textiles, all of which the Carlsons have bounteously infused.

Another enduring testament of Dalarna’s loom is that the town of Mora also produced Larsson’s noted contemporary, Anders Zorn [1860-1920], one of Sweden’s most distinguished painters and sculptors, whose mastery as a colorist has influenced Carlson himself behind the easel.

While the Carlsons don’t have an original Zorn, which routinely sell at auction for six figures, they do possess a painting by another master, the Danish-born American painter Emil Carlsen [1853-1932]. Along with the Carlsen and a small bronze by Italian Medardo Rosso, are religious icons, ceramic pieces, avian decoys, woven baskets, bronzes and paintings of contemporary artists collected in their global travels.

The sculptor credits his wife with possessing a keen eye for interior decoration. Many of the antiques that enliven each room were found in collaboration with Scandinavian Antiques in Denver. “They have an incredible ability to find special pieces,” Pam says of the dealer.

Originally, Brannvin was conceived as a summer house, Pam says, but seeking to escape the bustle of the Colorado Front Range, they made it their permanent home in the 1980s and the move to the Northern Rockies also coincided with the start of a fruitful period in Carlson’s career that still continues.

Although 1,800 square feet of living space is tiny compared to the massive trophy homes encircling nearby Lake Coeur d’Alene, it was large enough to raise a couple of kids. In fact, the main floor is bright and airy, the walls and shelves of the main rooms serving as galleries, and in the center of the sitting room is a vintage Magnificent Windsor woodstove painted pale middleblue, similar to the hue that colors the Swedish flag.

Carlson, a subscriber to live and let live, would consider it a sin to erect a structure that detracts from its environs. Less is definitely more. “I’d rather build another bird house than expand our footprint,” he says.

Nearly half a century ago, after Carlson finished his studies at the American Academy of Art and the Art Institute of Chicago, he worked for a time as a commercial illustrator and received mentoring from an art director and painter named Ralph Thompson. “When Ralph talked about art, he used words like ‘reservation’ and ‘restraint’ as forming the pillars of good taste,” Carlson says. “He said the strength of expression lies in eliminating the non-essential. It brings you closer to a subject’s soul.”

Carlson believes all landscapes, living creatures and inanimate objects exude their own rhythms, life-force vibrations and fleeting glimpses into the eternal.

Painter Thomas Quinn says the philosophy defines Carlson’s sculpture, from his highly acclaimed Tarahumara Indian series that grew from years of studying the remote tribe in Mexico to his other exquisite figurative explorations of equine subjects, allegorical portrayals of native peoples in the West, and ballet dancers who performed for professional companies in New York City — the latter prompting critics to call Carlson “the Degas of bronze.”

If Carlson chose to do it, he could commute to his studio in Harrison by boat, a trek that he still occasionally makes during the ice-free seasons. But today, he heads out the door and beelines toward a hiking trail he carved through 54 acres of dense woods.

Bound for the crest of a ridge, he identifies, en route, the spoor of elk, black bears and whitetail deer with whom he is happy to share the premises. Over the course of a couple of miles, he tucks into natural alcoves where he sometimes meditates about pieces he is working on and events in his life. “I enjoy coming up here to center myself,” the fit 69-year-old says, sitting on a promenade with wide views, not far from where he buried the beloved family dog that used to roam with him.

Rather than winnowing himself into narrow refinement, he says his sensibilities are international and eclectic, mentioning five of his favorites: Antonio Mancini, Antoni Tapies, Abbott Handerson Thayer and, of course, Carlsen and Rosso.

Worldly eclecticism is also visible in the grounds encircling Brannvin far below. Just as he delights in subsuming himself in the changing autumn colors, he and Pam, with a sculptor’s touch, have created intimate spaces intended for reflection. Their French garden, replete with European rose varieties, a sweep of lavender and a birdbath, are connected via a meandering stone path to an Italian pergola that offers shelter from the hot summer sun and serves as a staging area for evening entertainment.

The pergola is halfway between the main house and a cheery guest cottage (formerly Carlson’s painting studio) with a high ceiling and cathedral windows that pull in the arching ambiance and allow guests to peer up toward the stars.

The artist’s studio in Harrison inhabits a former Presbyterian church that the couple acquired years ago. Rather than stripping away vestiges of its former use, Carlson converted the former sanctuary into a sculpting area where his most heralded pieces of the last quarter century sprang to life. Meanwhile, the former pastoral office is his painting space, and girding the walls of the two-story building is an extensive library of books spanning the ages.

“Balthus referred to painting as a form of prayer,” Carlson says. “If you think about art as your religion, then you conceive of your surroundings differently, and the things you identify with in your life.”

“Most people believe all artists live this way, so attune with the natural world that inspires them, but in fact few do,” Ullberg says. “When people say that George Carlson is the artist’s artist, it isn’t just that he is brilliantly creative. This is what we mean. He and Pam are doing it right, the way it is supposed to be and many of us are envious.”

EDITOR’S NOTE: George Carlson’s award-winning sculpture and paintings have been featured in exhibitions with venues as varied as the Kennedy Center and Smithsonian Institution in Washington, D.C., the Denver Art Museum, the Thomas Gilcrease Museum in Tulsa, the Autry Western Heritage Museum in Los Angeles, the Hakone Open-Air Museum in Tokyo, the National Academy of Design and the National Sculpture Society in New York City, the Eiteljorg Museum of American Indian and Western Art in Indianapolis and the Kentucky Derby Museum. His pieces are part of major private and museum collections. Carlson’s work is represented by Art Spirit Gallery of Fine Art in Coeur d’Alene, Idaho; The Sportsman’s Gallery & Paderewski Fine Art in Beaver Creek, Colorado and Atlanta, Georgia; Mongerson Galleries in Chicago; and Gallery 1261 in Denver, Colorado. 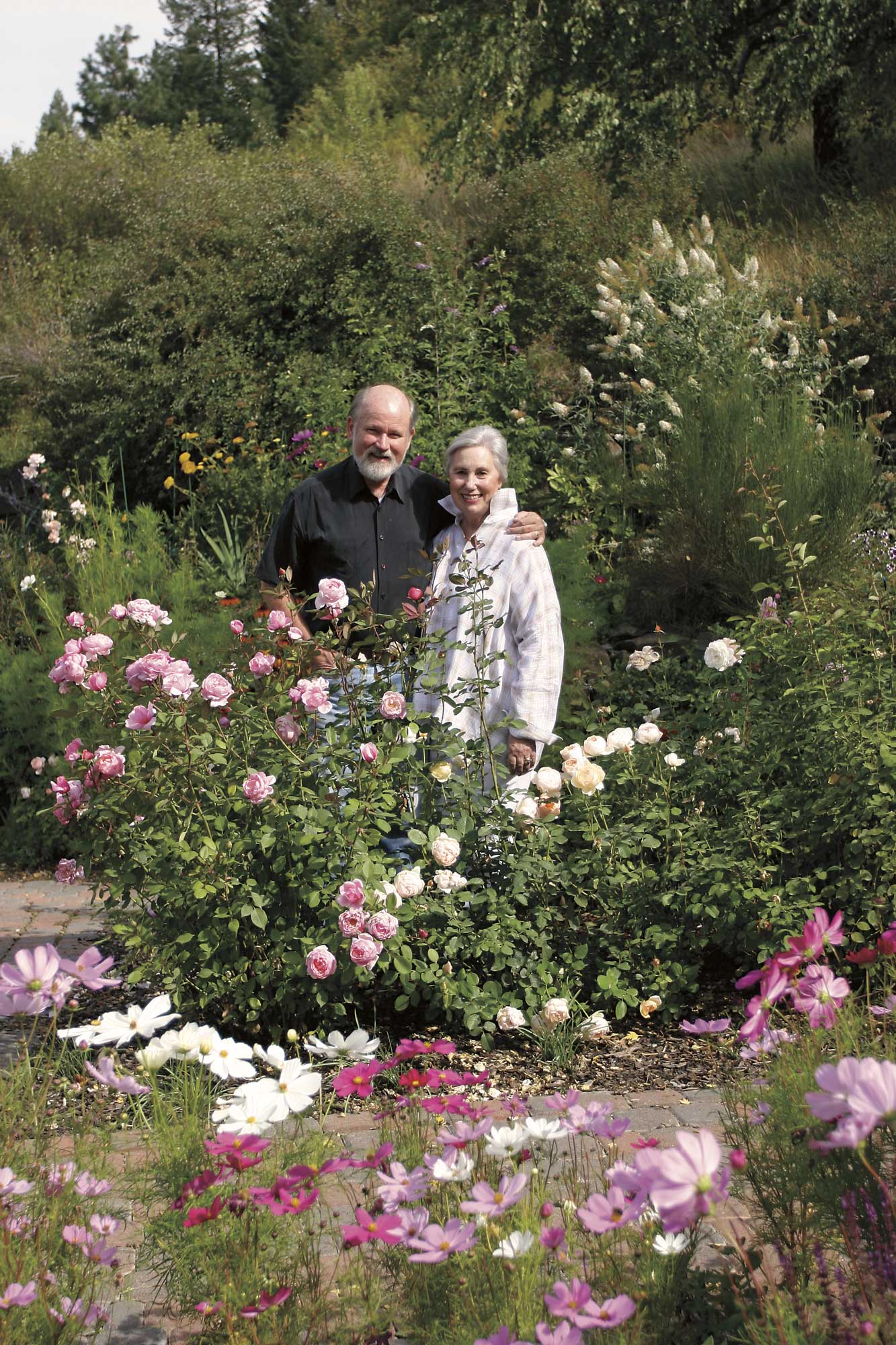 George and Pam Carlson, in their stunning rose garden, designed Brannvin to be a sensual feast. 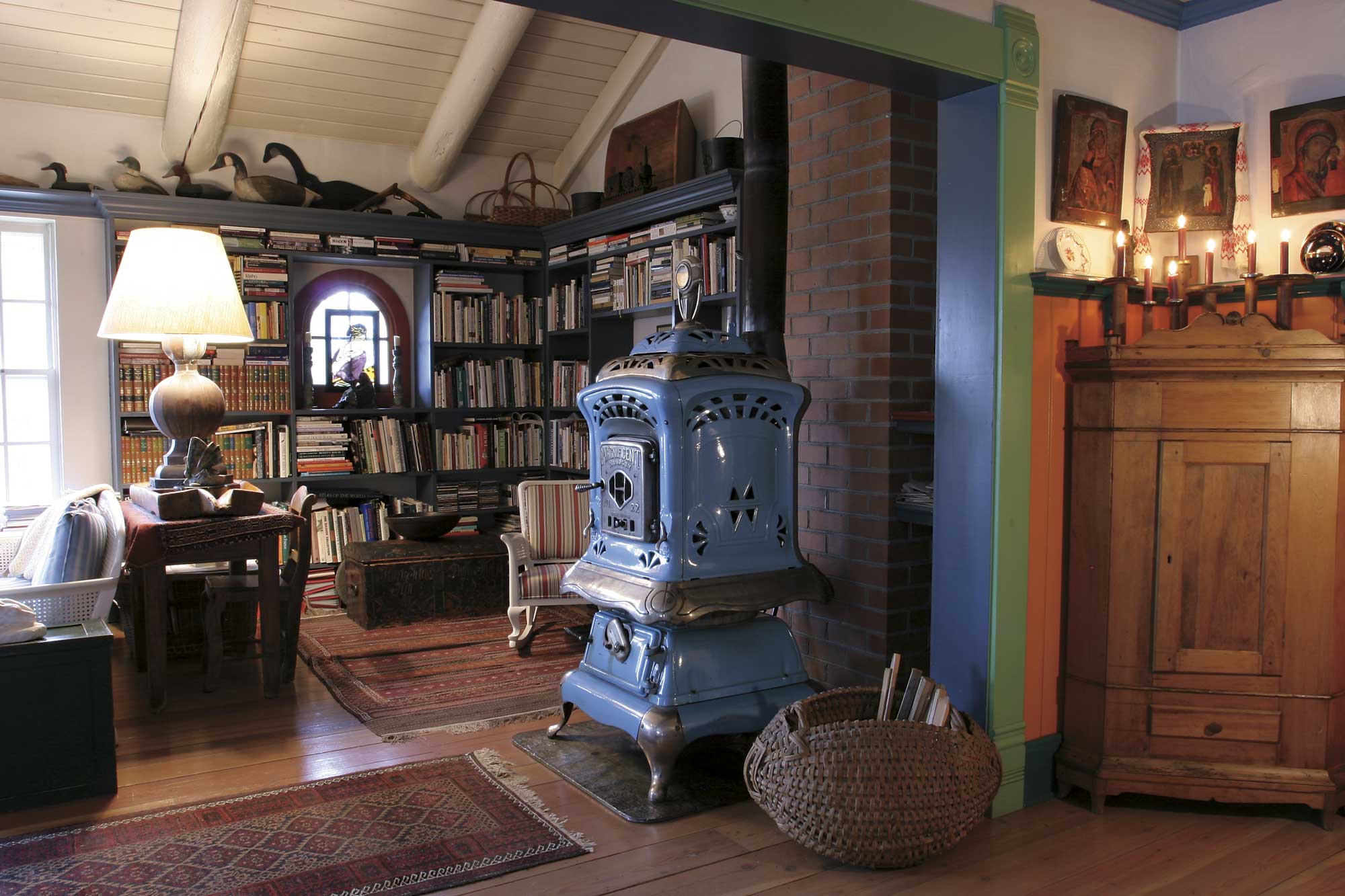 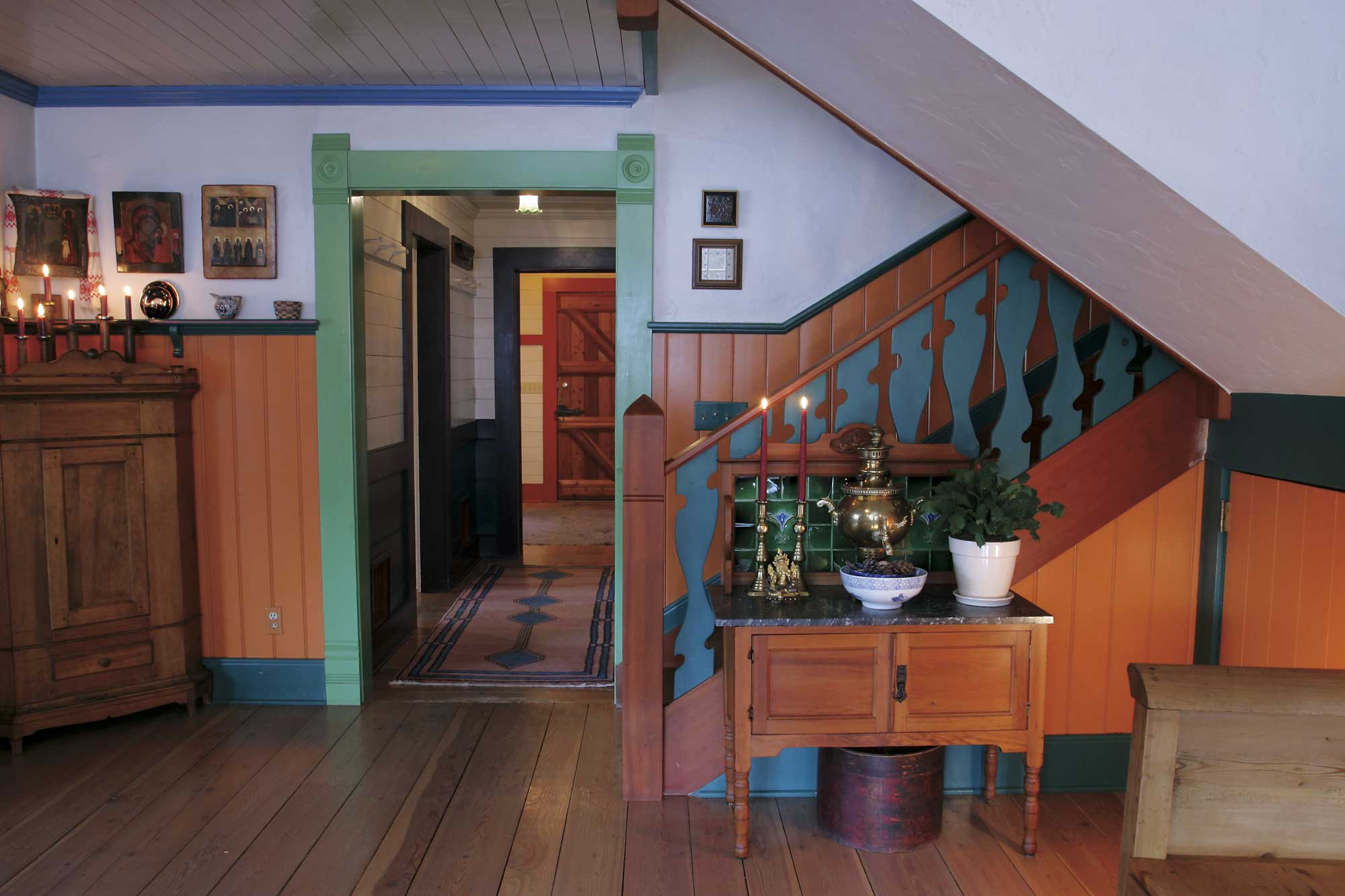 The inner-most spaces of their Swedish Arts & Crafts-style home 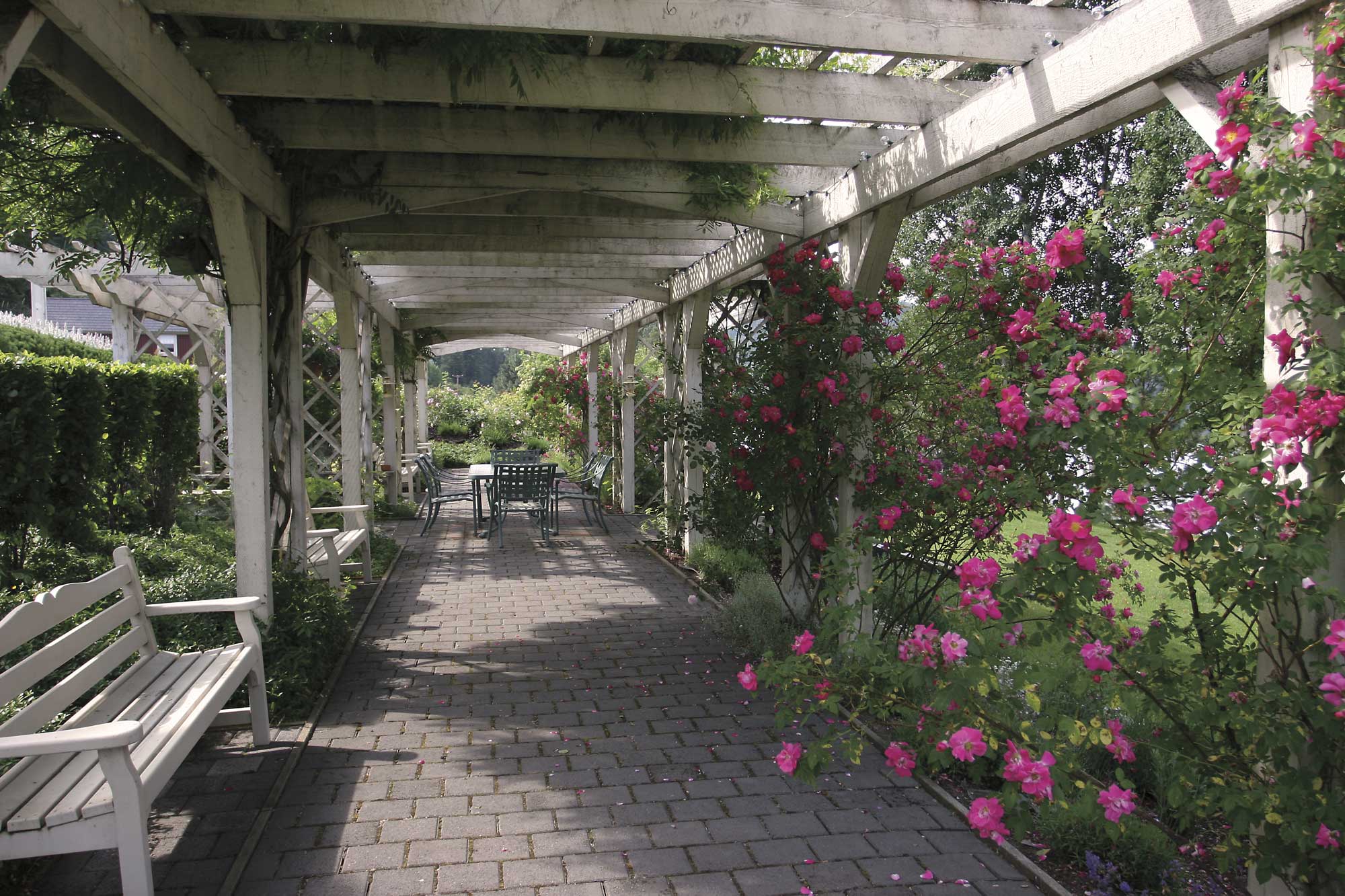 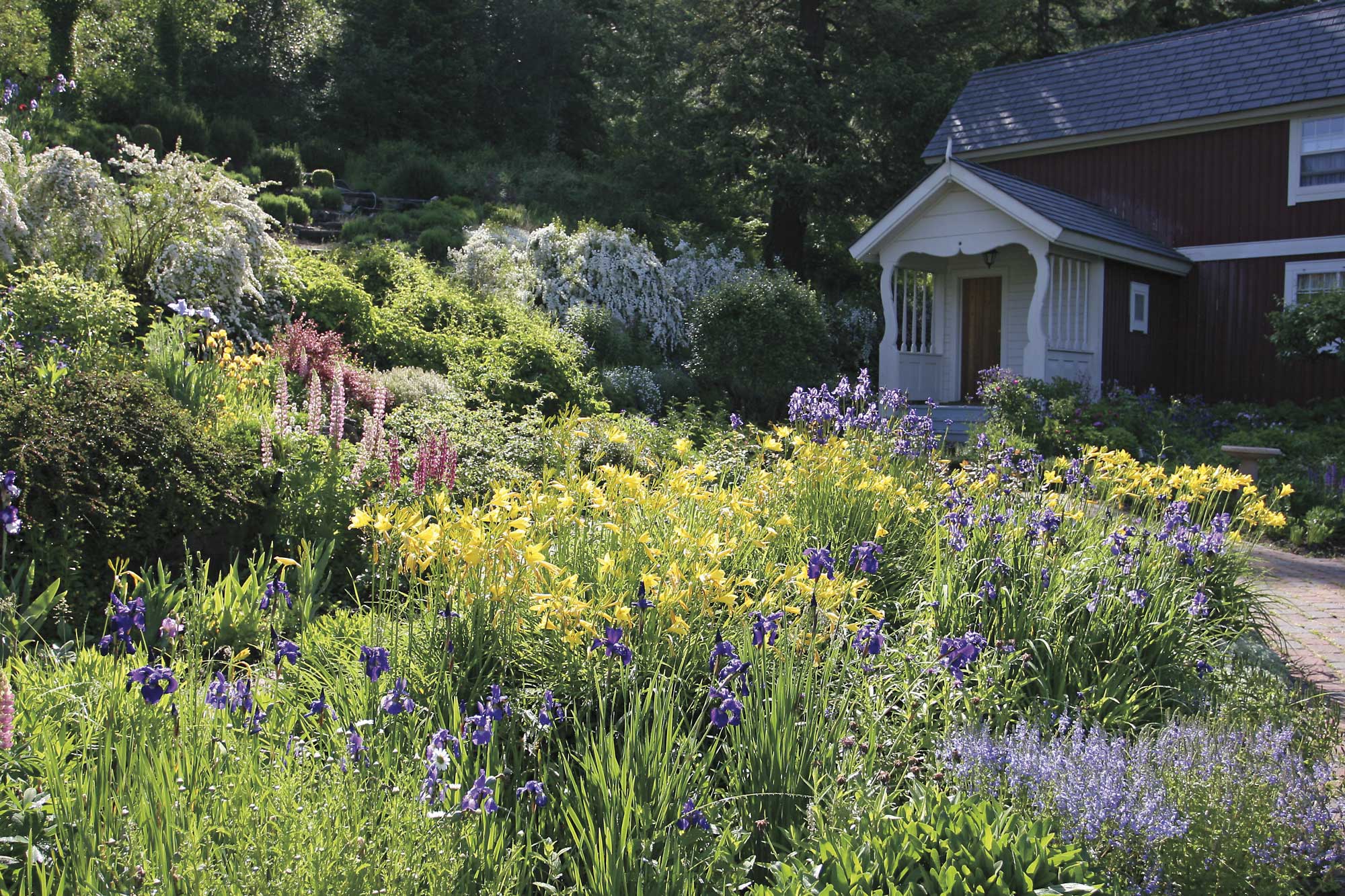 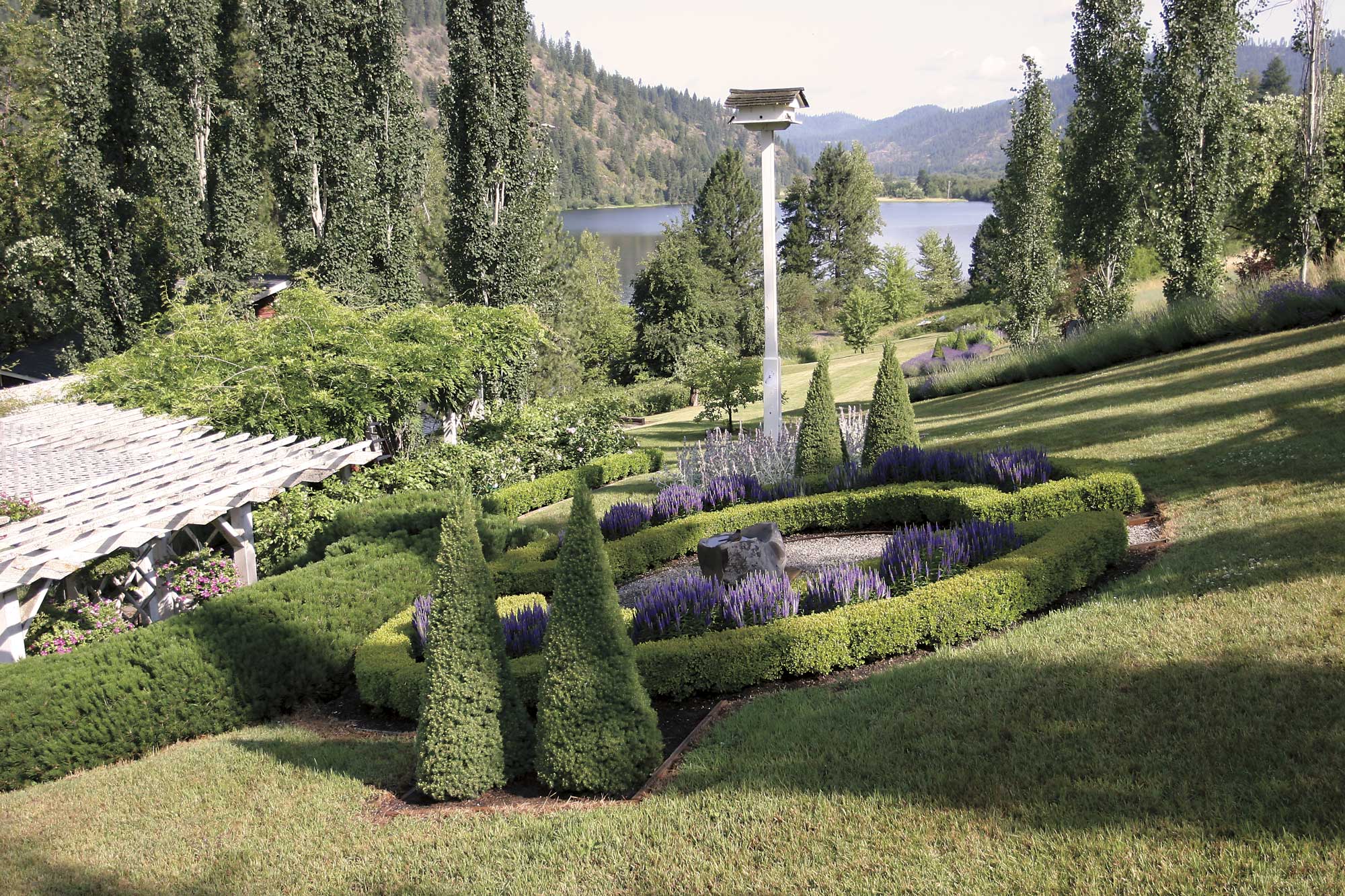 Outside to the Pergola and European gardens 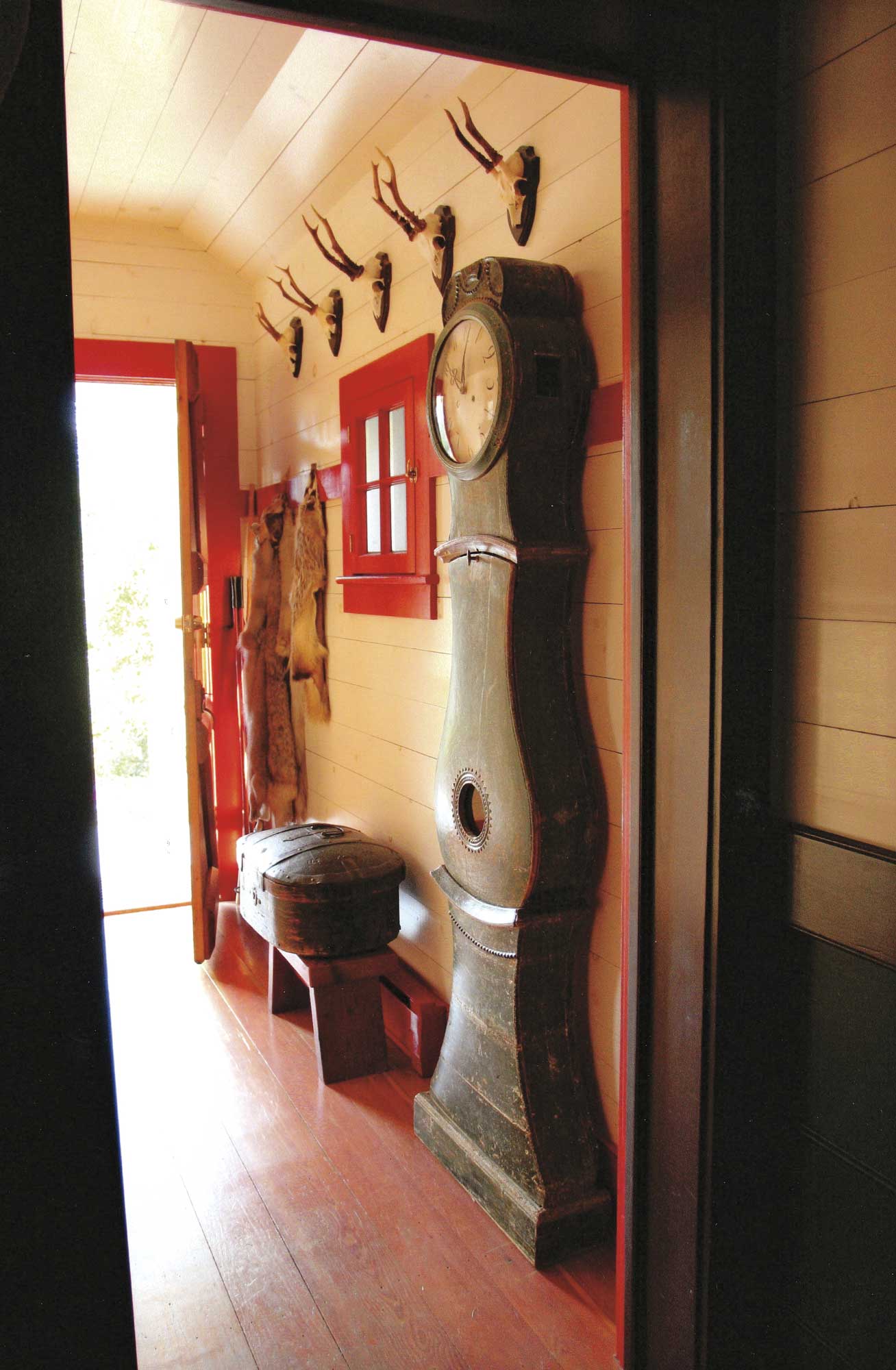 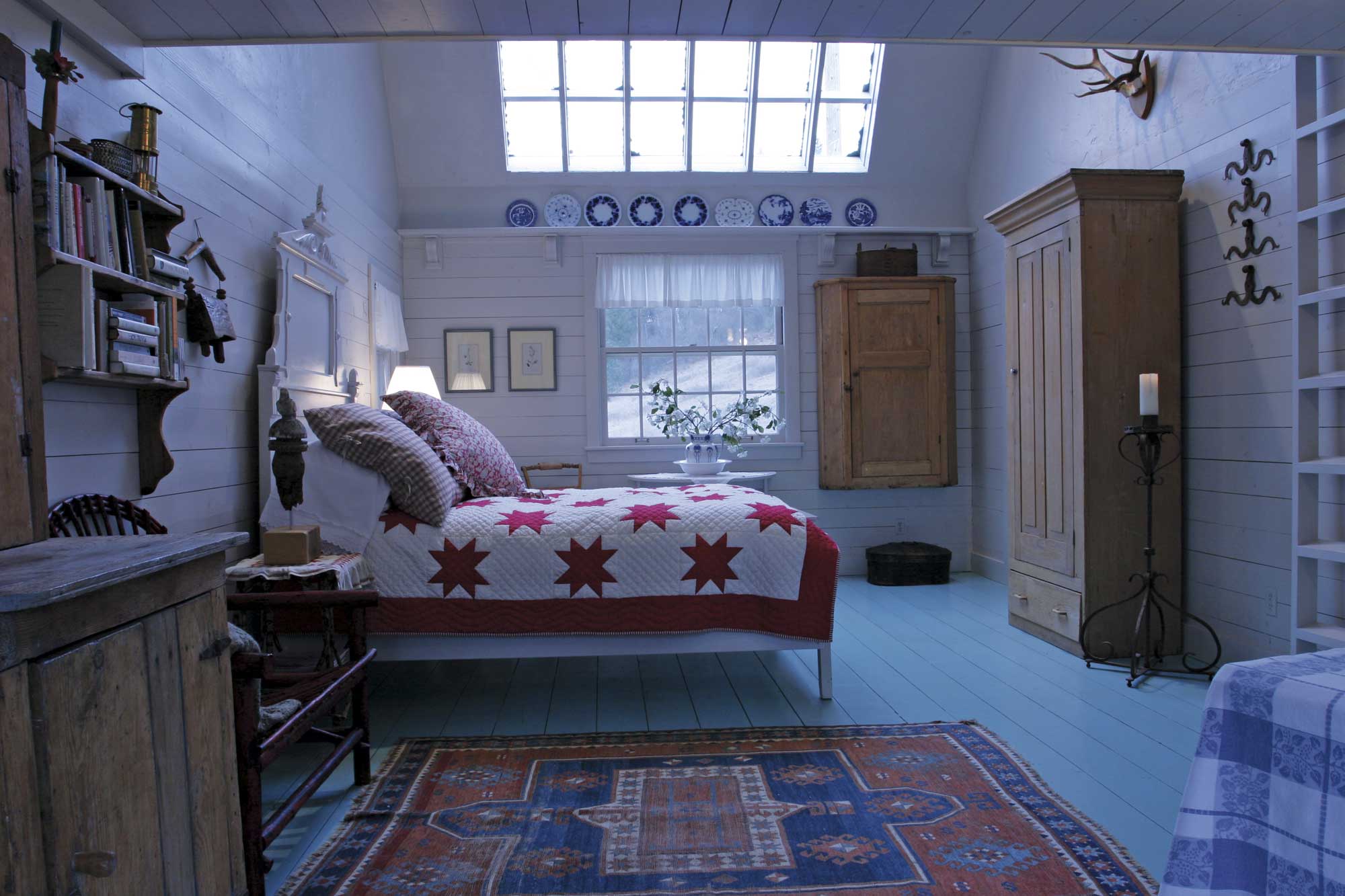 Once upon a time, the guest cottage was Carlson’s painting studio. 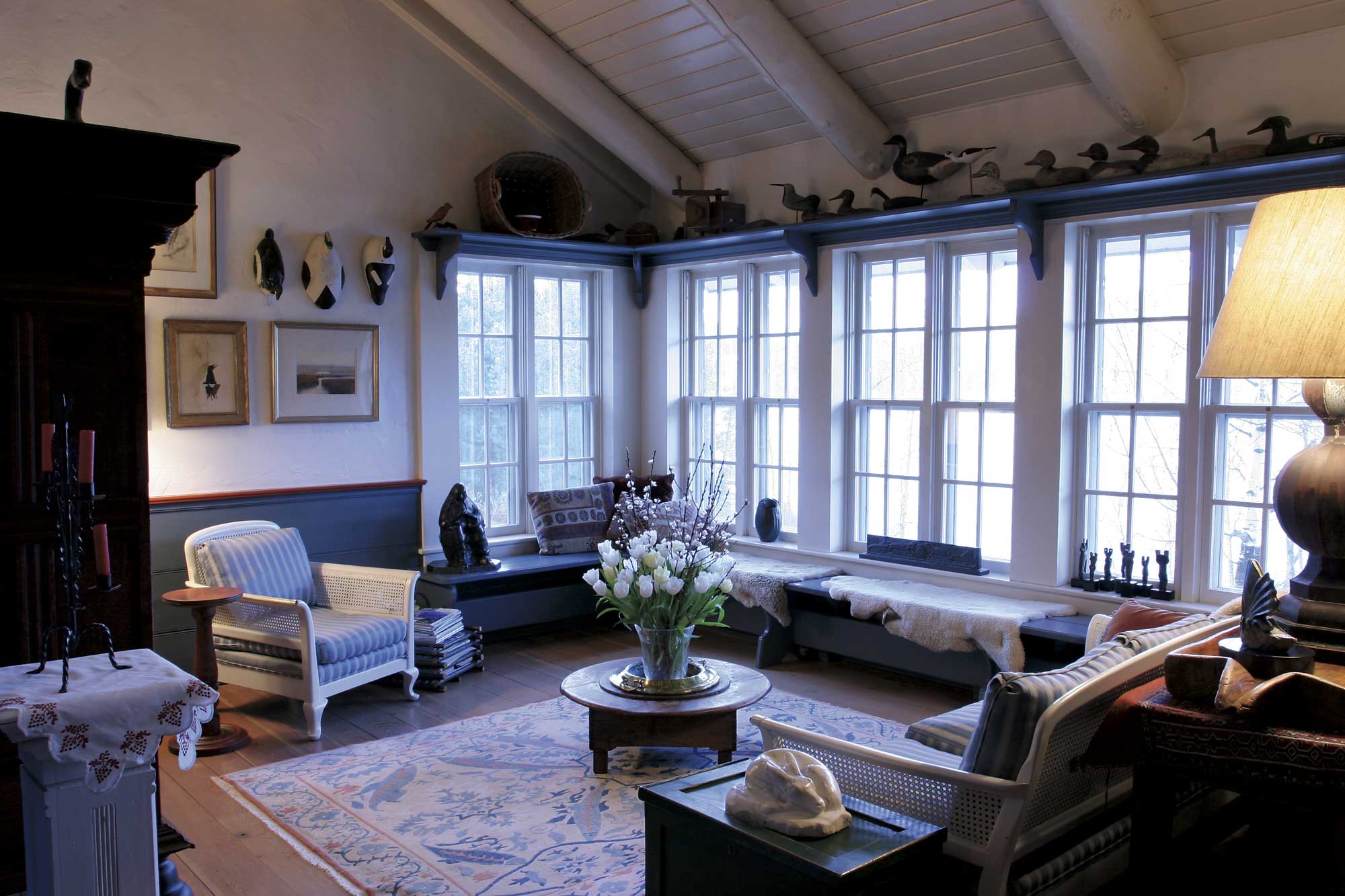 Meanwhile, Brannvin’s light and airy sitting room is ornamented with artifacts from their travels. 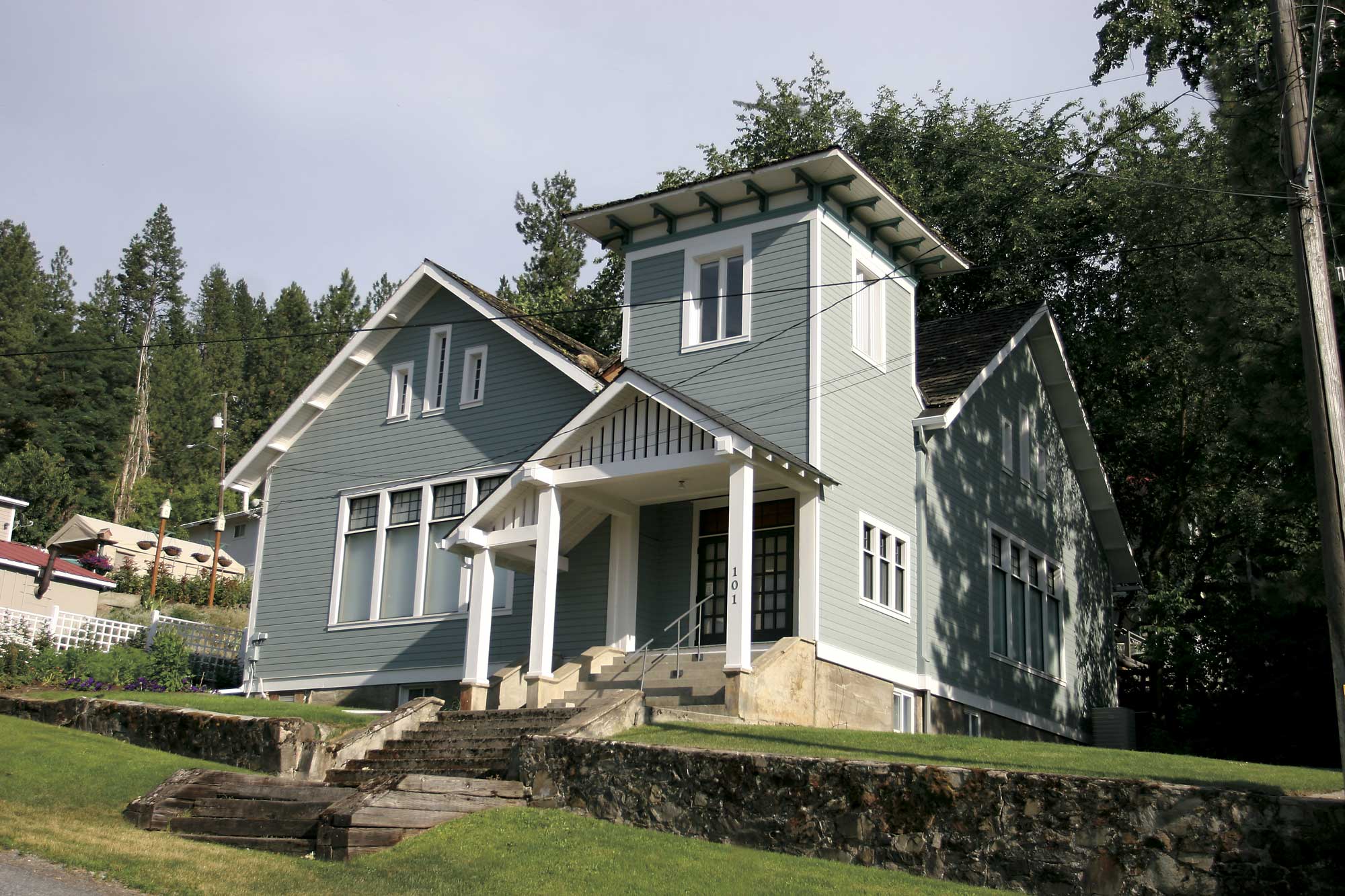 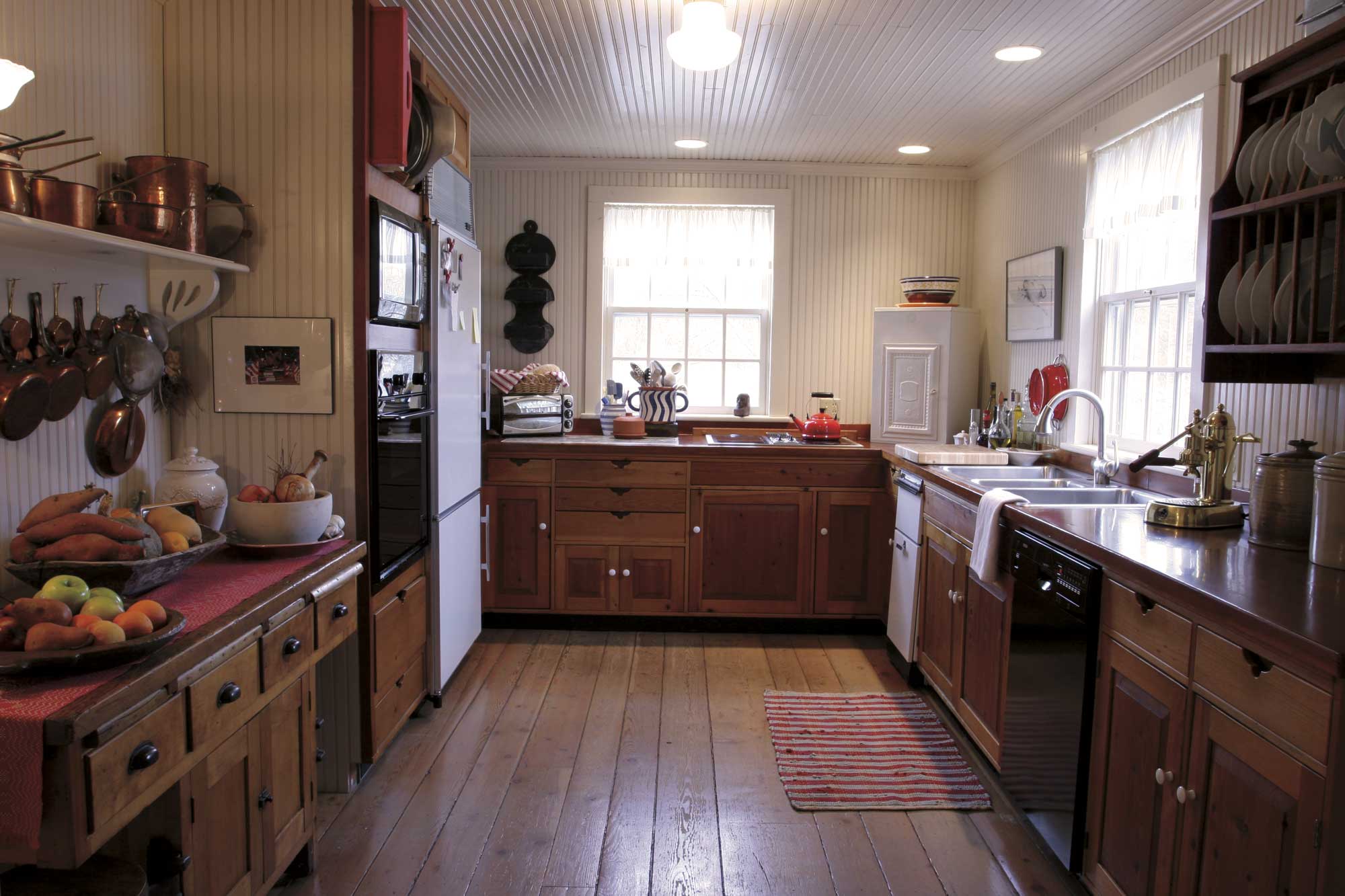 The ambiance of the kitchen emanates from locally-milled woodwork. 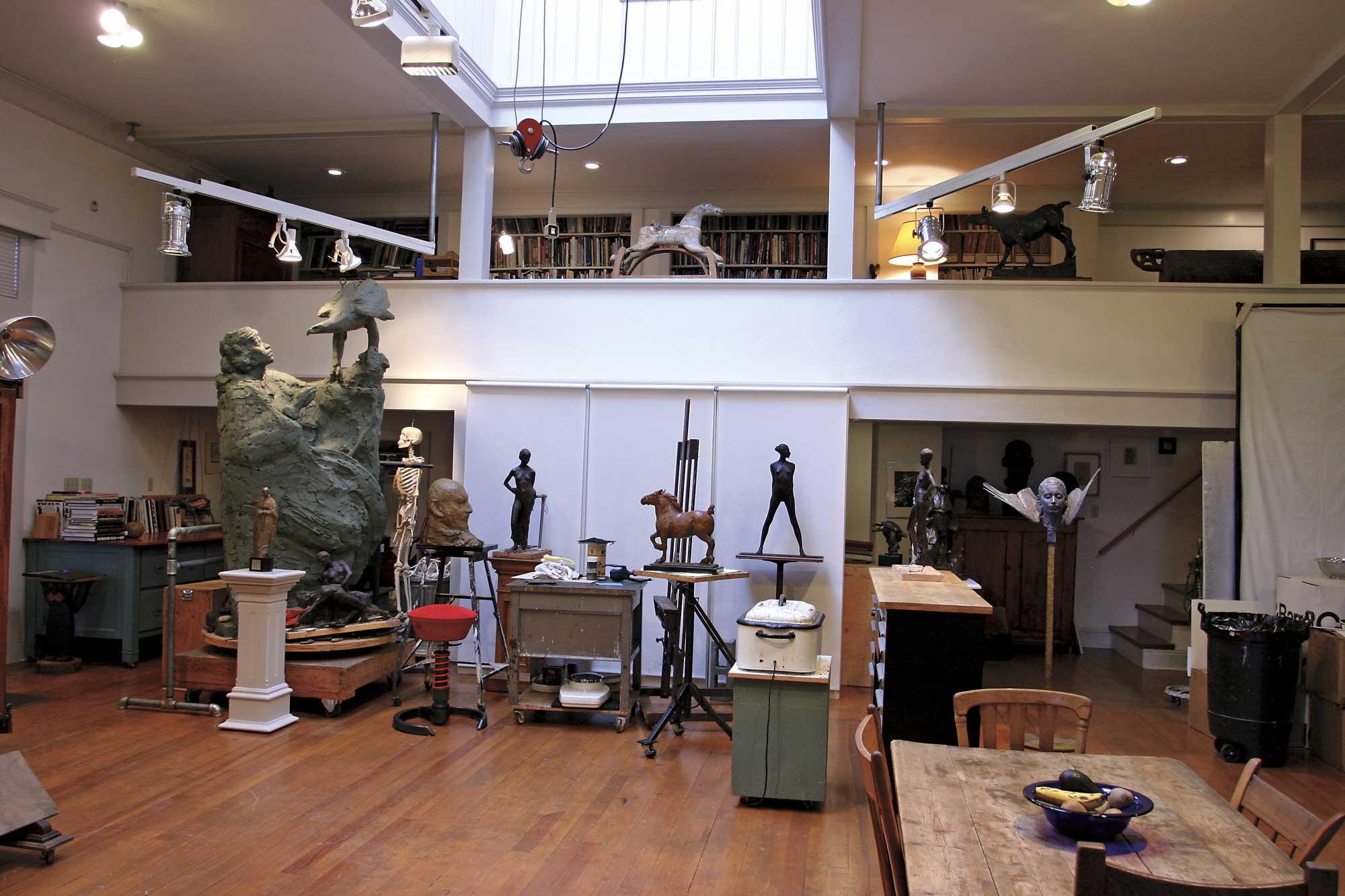 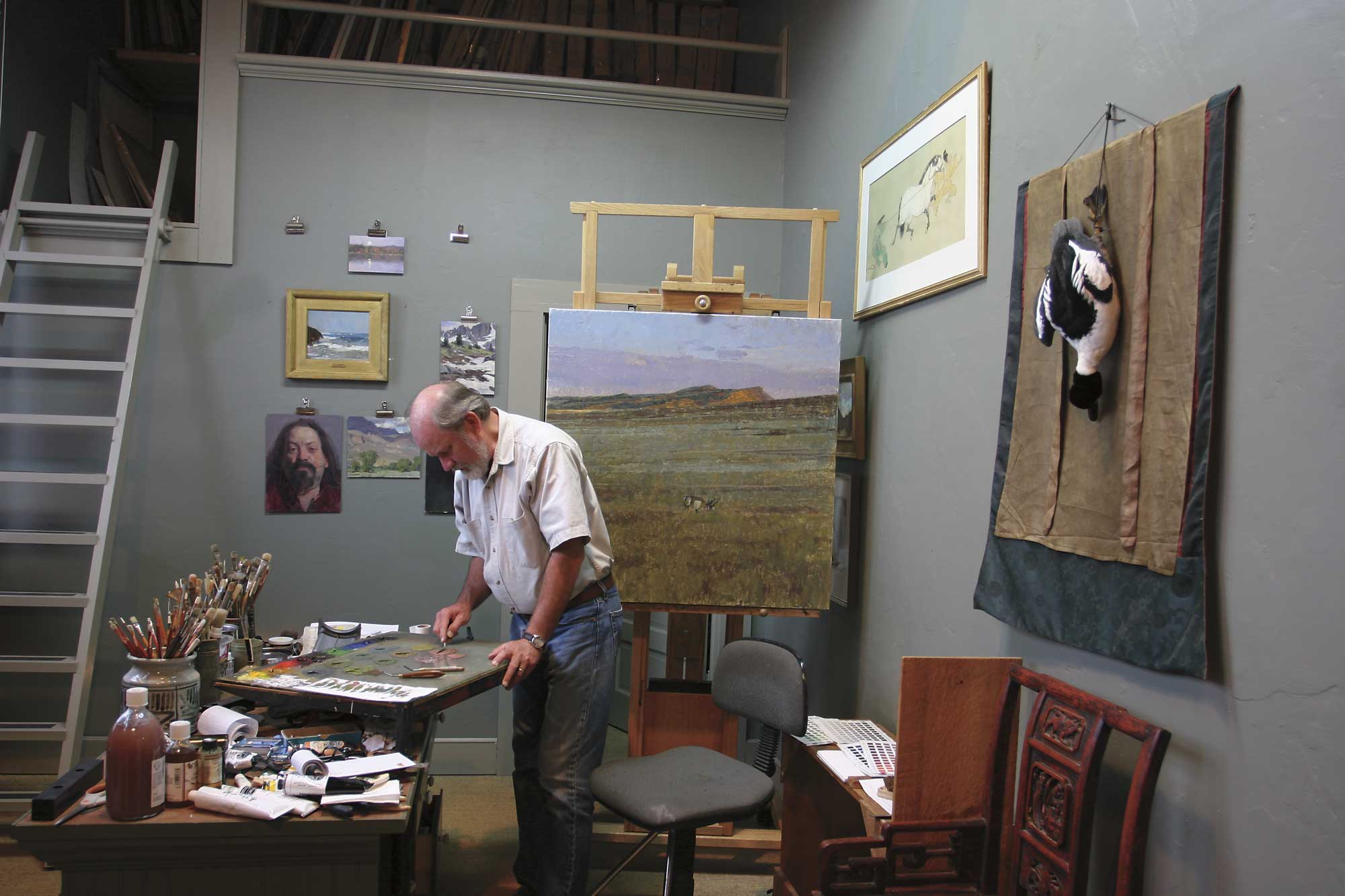 The sanctuary of a former Presbyterian Church in Harrison serves as Carlson’s studio for creating monumental sculpture and easel paintings. It, too, is awash with visual stimuli, which, Carlson says, gives him a feeling of connection to the divine. 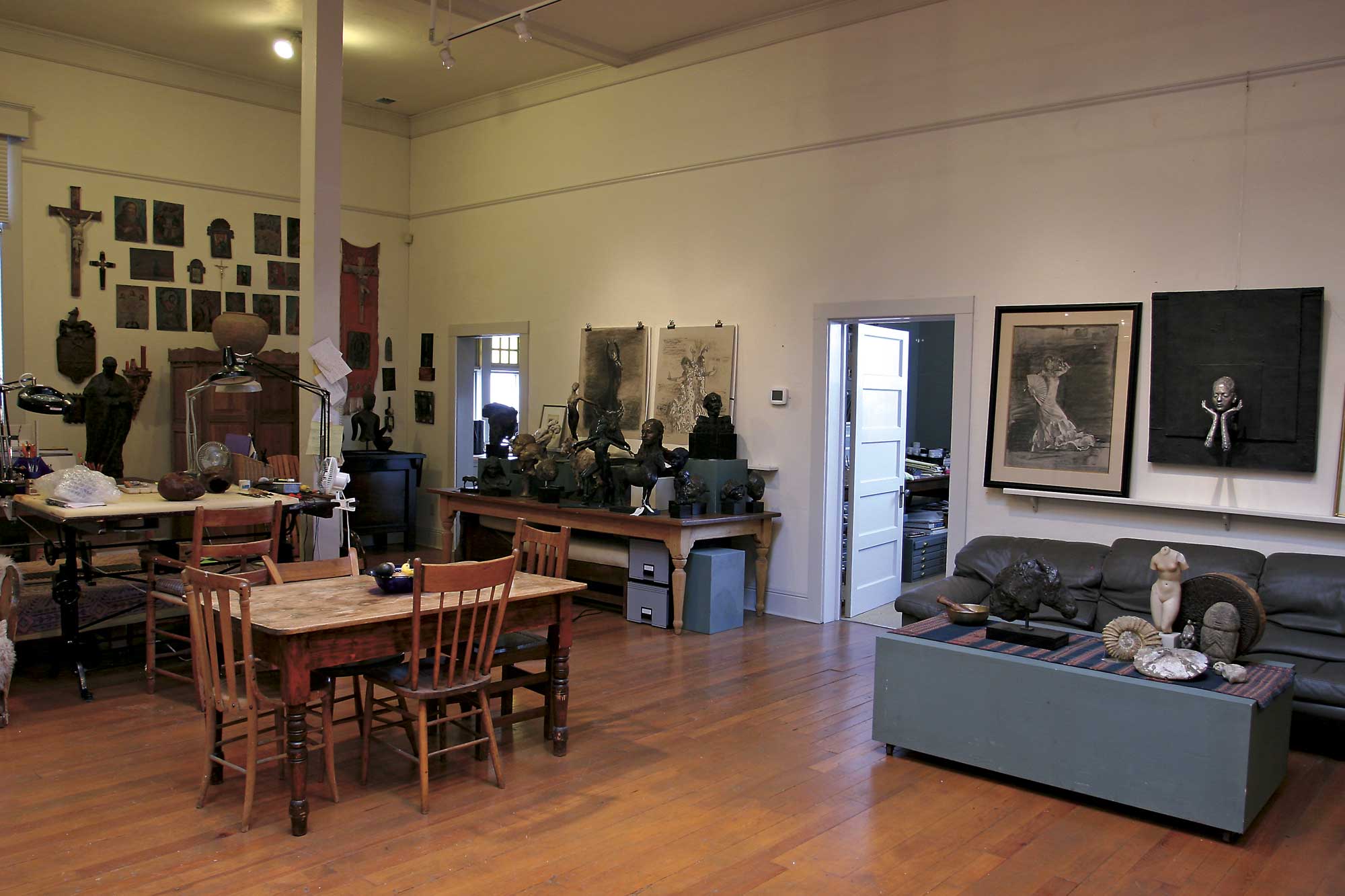