Multiple worktables make getting around the studio iffy. The walls are a mix of Buckingham’s sculpture and odd bits that have struck his fancy.

04 Aug In the Studio: Outlier

“Arts District, my ass,” David Buckingham mutters, pointing a thumb up the street where a loft building has been cleared of musicians for the newest outpost of the trendy, private-membership Soho House. The tentacles of downtown Los Angeles gentrification are curling menacingly.

He’s sitting on a dilapidated Adirondack chair amid piles of weathered pieces of painted metal outside his studio. The leaves of a plucky but chemical-spill battered avocado tree cast shade down the alley. Buckingham jabs at his knit cap and points the opposite way at his new next-door neighbor, the sprawling, pristine white Rosamund Felsen Gallery, for years a fixture on the wealthy west side. “It’s right on the other side of that wall,” he says, eyes narrowing with moral indignation. “I feel like a polar bear on an ever-shrinking ice floe.”

Fifteen years ago when he first rented the studio, this was a solidly industrial area on the far edge of the Arts District. It’s still gritty, but it’s just chic enough so that working artists will, inevitably, be priced out.

For now, Buckingham works in what could be mistaken for a not-very-well-kept machine shop with welding, cutting and planing equipment, gloves, protective goggles and earphones strewn about on scarred tables. Fluorescent lighting is attached to beams, and the day is filtered through grubby skylights and the open door to the alley. The walls are covered in his vibrant work and objects that have struck his fancy. On a battered worktable, Buckingham is painting a new abstract piece with clear sealant.

Once upon a time in the 1980s, Buckingham was a high-flying creative director in the advertising business in New York. One day he bought an old iron gate to convert into a bed frame. Looking for someone to teach him welding, he stumbled on Ray Kelly, who led a band of misfits as they welded assemblage pieces in an empty lot in the East Village, and called themselves the Rivington School. The lesson lasted five minutes.

Buckingham got the bug, and spent weekends welding found metal into furniture. His first creation was a stool for a potter friend. “My friend says this is a piece of folk art,” he told Kelly. Kelly’s response — he was a man of few words, more of a grunter — was, “Buckingham, remember, art is just the last three letters of f-a-r-t.”

Buckingham was the only one in the group with a job. He was making buckets of money and living on the edge. “It was the ’80s,” he says. “Hard, hard partying.” He’d get fired, then rehired. One ad job took him to Australia. “I got a studio there and kept screwing around with the furniture, but I developed this horrible heroin habit, pretty much shot up all my money — 20 years in the business — in about two-and-a-half years.” He was arrested in Los Angeles and served time in jail.

“When I got out, I said, ‘I cannot go back to that business. Fifteen rehabs in 20 years? That’s enough. I want to see if I can make this metal thing fly.’ Which was just a pipe dream.”

He was still making furniture, but decided to go all in for a piece of art. “You know, Ray Kelly’s in New York, he won’t know. And it’ll be a failure and I’ll go back to making my weird furniture,” he says. “I cut up an old locker and welded it into a crude, Easter Island kind of a head.” That was it.

“I don’t call myself an artist,” he says. “That word’s so fraught with meaning. I call myself a sculptor.” A sculptor who’s obsessed, often working late into the night, constantly drawn to his studio.

In Santa Monica one day he saw a kid wearing a T-shirt that read, “Feel lucky, punk?” Buckingham’s immediate reaction was, “That would look great in metal.” He began sculpting wall art, sometimes stand-alone letters, sometimes large grids with favorite lines from movies such as “Pulp Fiction.” They’re humorous pieces that skirt the line for a few nervous gallerists (“Buckingham, WTF, send me something I can sell!”), but the most outrageous pieces are usually the ones that sell first.

“The work isn’t serious,” he says, “but I’m dead f—ing serious about the work itself.”

That kind of covers it all. One piece has a sliding pointer and the choices, “Spit” or “Swallow.” It’s called The Gum-Chewer’s Dilemma. “Why?” he asks, feigning innocence. “What were you thinking?” He admits at times he’s tempted to censor himself, but in the end Buckingham always lets himself loose.

Periodically he takes off into the desert looking for more of the sun-cured, primary-colored painted metal he uses. It’s clear the act of finding metal is as much a part of the artistic process as sending up sparks in the studio.

“People in the desert make the people in ‘Deliverance’ look like Rhodes Scholars,” he says. “Sometimes they don’t want to sell. I found an old guy out there one time, had a school bus. I mean, this thing had been there 50 years, sunk in the dust, no tires, birds living in it — done. But I loved it. I said, ‘How much will you sell me this for?’ And the guy, who’s ancient, can’t walk, says, ‘I’m gonna fix that up.’ Whaaat? This thing hasn’t moved since the Manson family lived in it. Take the money, old man! I had one guy tell me, ‘I’m gonna put that on eBay.’ What in the hell are you talking about, eBay — you don’t have electricity.”

Friends have suggested he could just get some scrap metal down the street, paint it, and drag it up and down the alley behind the studio. He shakes his head and sighs. They don’t get it.

Buckingham also knows he’s hardly in the vanguard when it comes to working with words and phrases, or in sculpting with found metal. But that’s not an issue. He knows a little more about the art world than he did when he started, but he’s had to Google the names of artists to whom he’s been compared. It’s hard not to wonder, as his welding skills improve, and his knowledge of other artists widens, where his work will go. Buckingham really doesn’t care. He’s alone in the studio, working compulsively.

“Once I’m into something, I can’t wait to see it finished. So I zero in on it like a badger on a snake. Because I don’t know how it’s going to turn out. It’s like a movie, I’ve got to watch it till the end.”

Wind rustles through the frayed leaves of the avocado tree. He gestures expansively at the sea of metal around us. “My next piece is just sitting in there somewhere. Is it jumping out at you? I don’t know.”

California sun bakes the fruits of Buckingham’s forays into the desert, tossed in a formidable pile behind his studio. 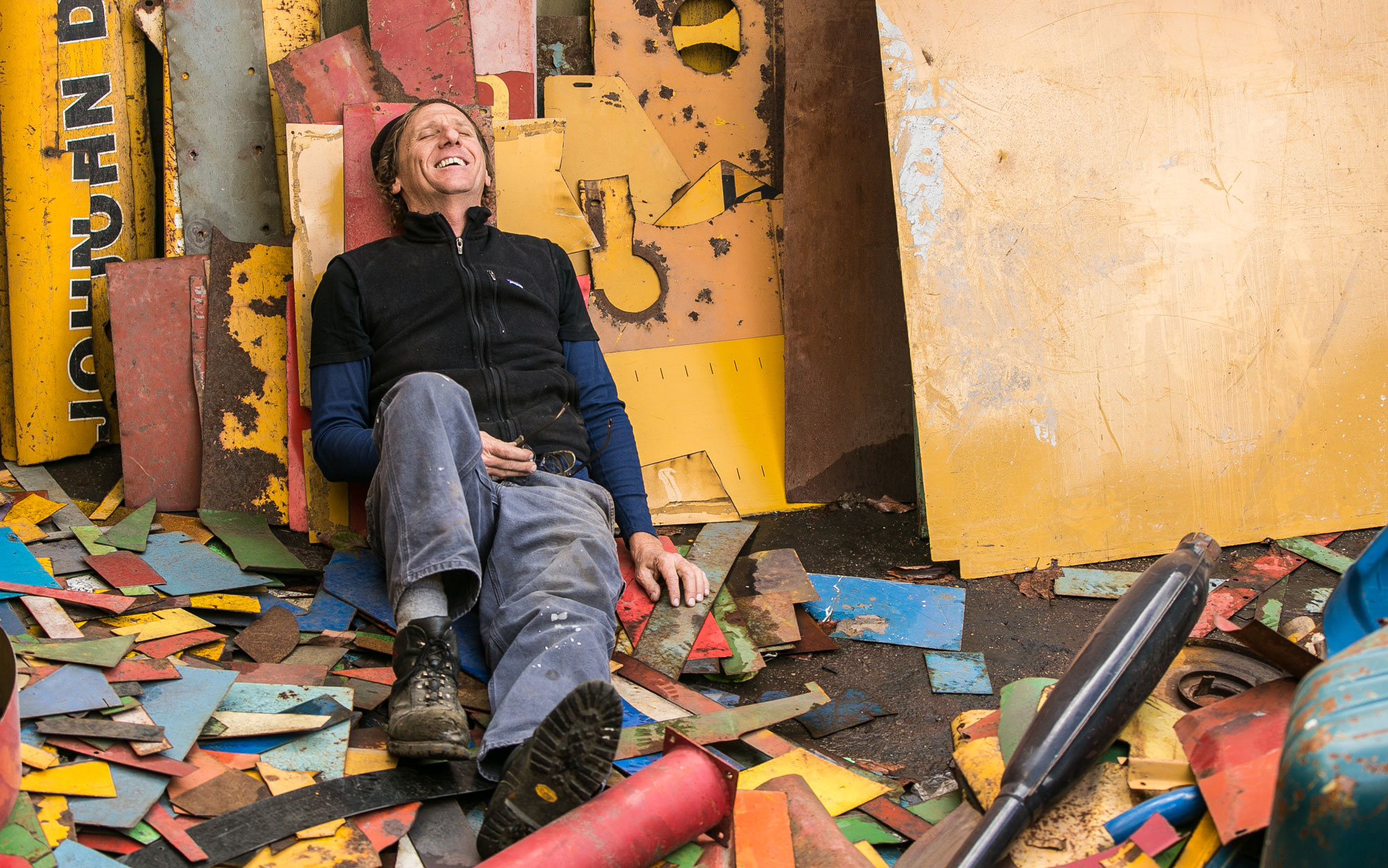 Buckingham revels in primary-colored pieces of metal that haven’t yet spoken to him. 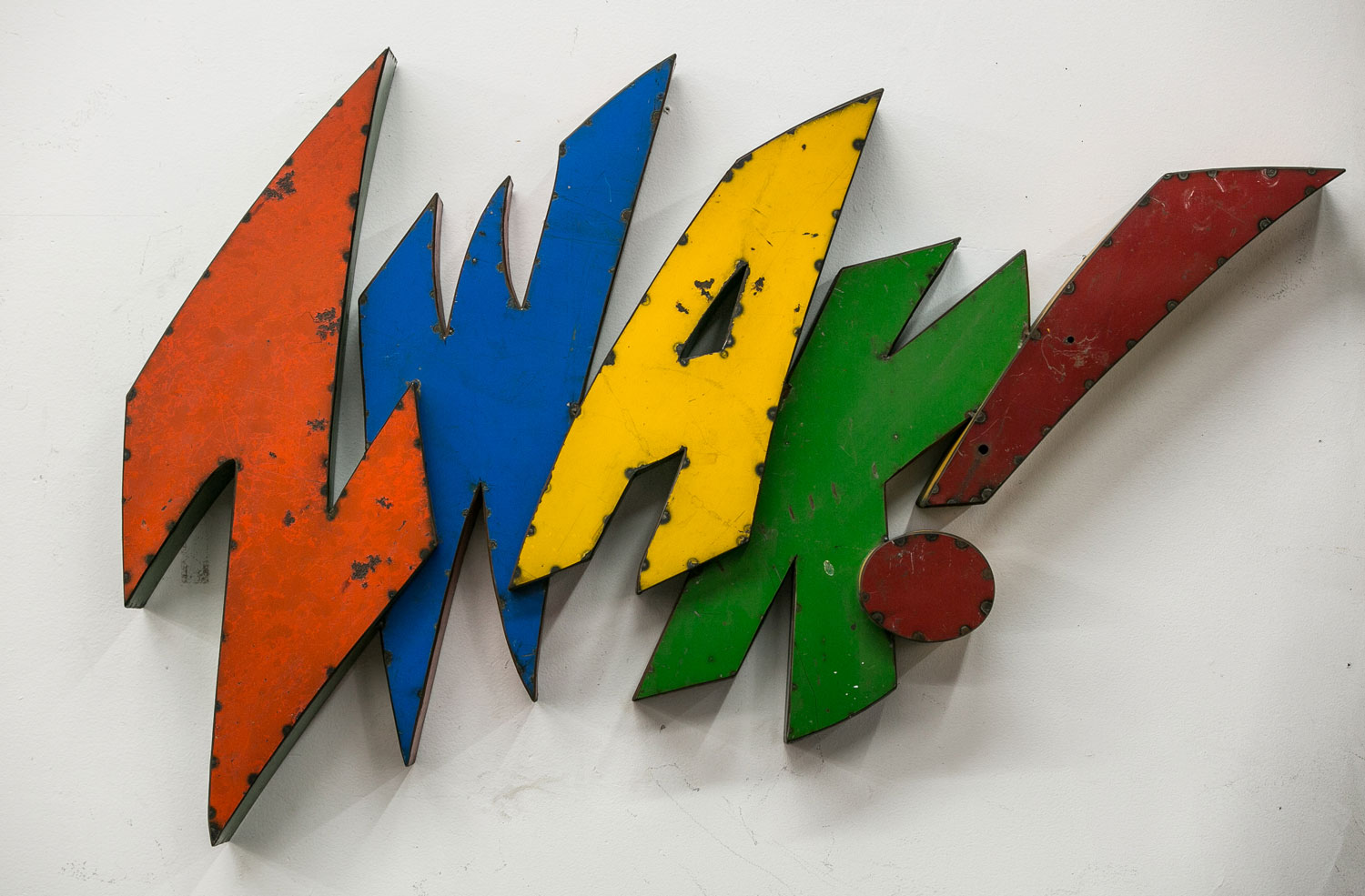 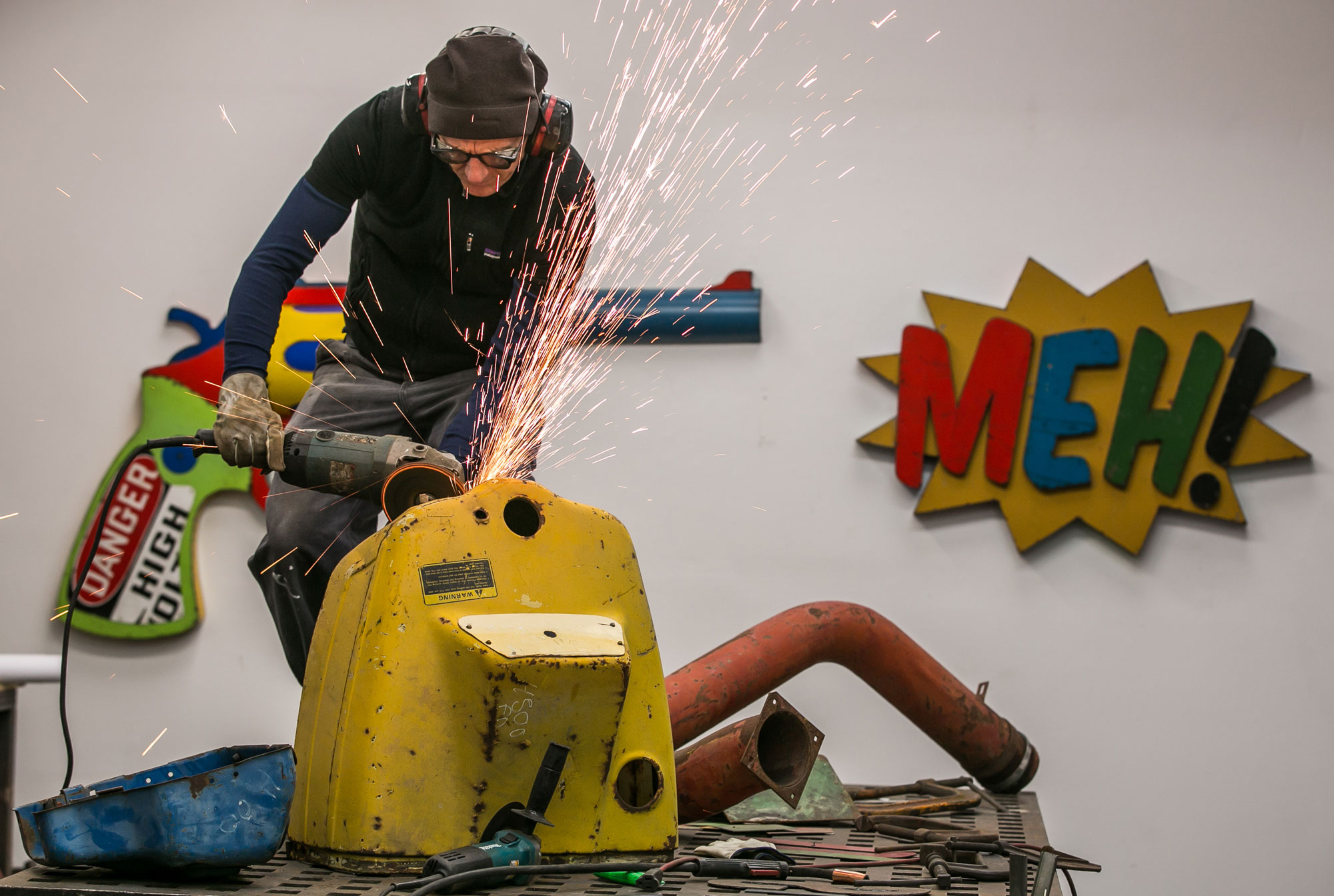 Buckingham started working with metal in the 1980s after a 5-minute welding lesson from Cowboy Ray Kelly in New York’s East Village. The metal comes from wrecked cars, tractors, anything the desert reveals. 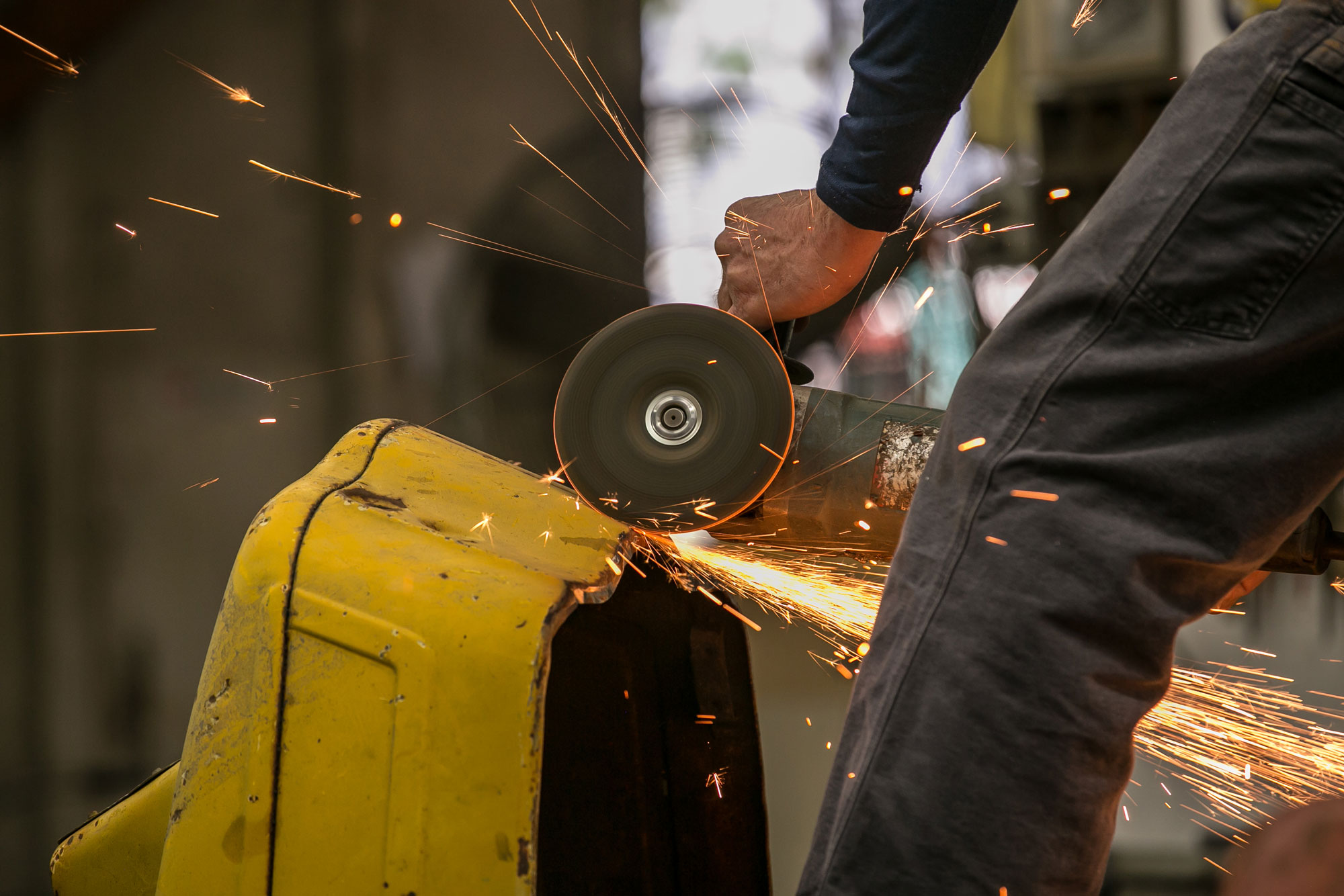 When he’s intent on finishing a piece, Buckingham can spend an entire night in a hail of sparks. 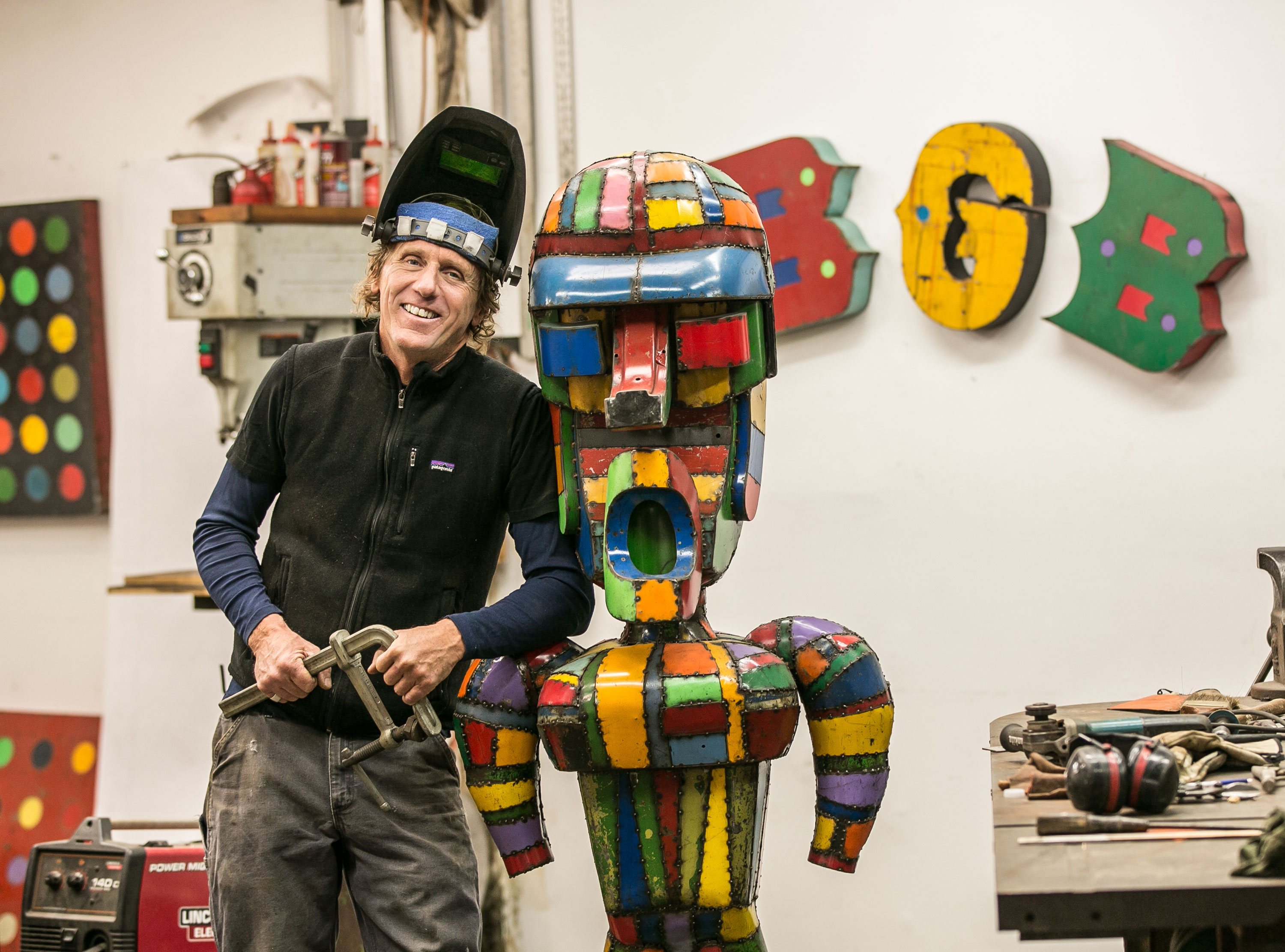 His studio is like a machine shop and most of the time Buckingham is wearing some sort of protective gear. 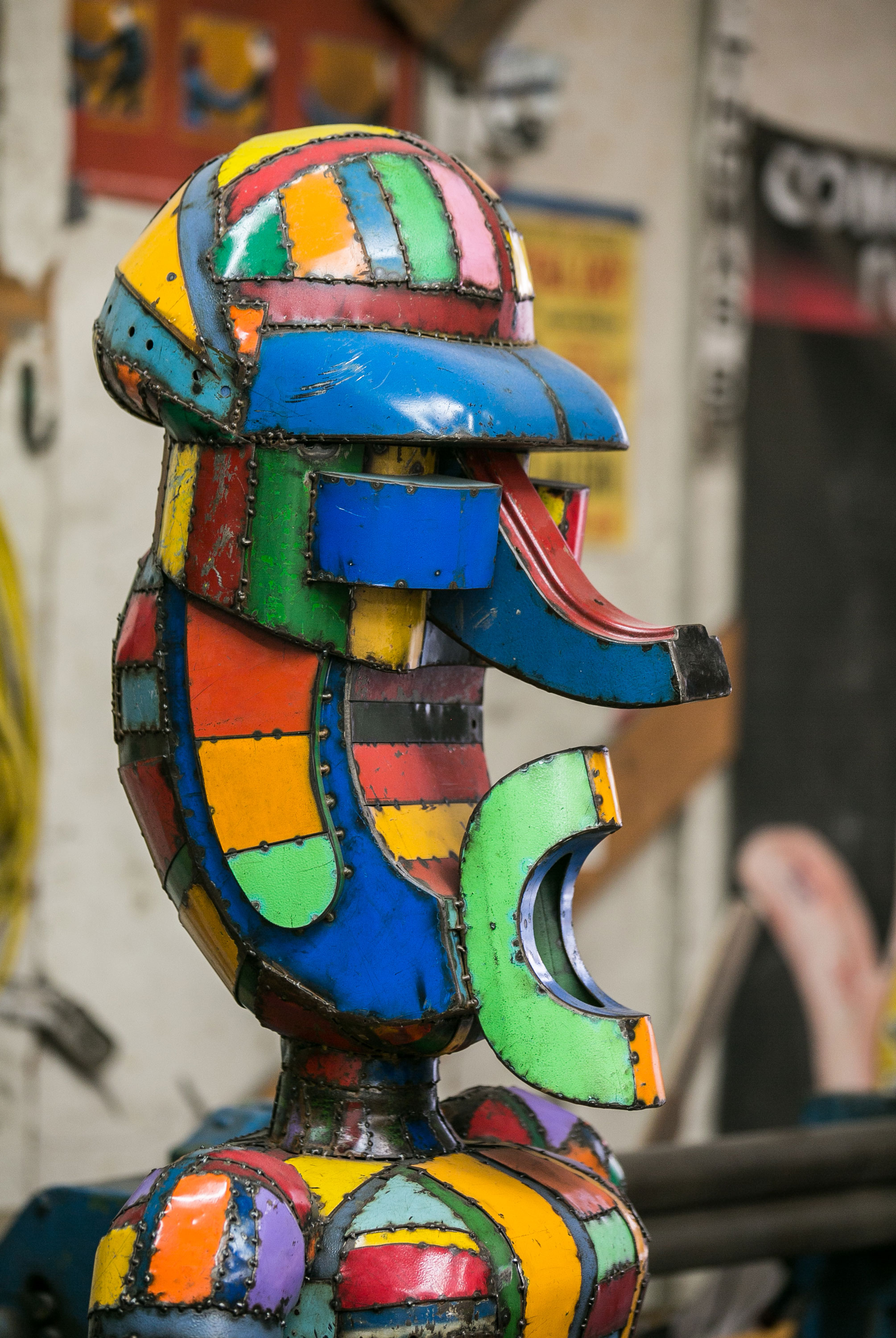 Putting together this sculpture took months of trial and error. Buckingham swears he’ll need a rest before tackling another. 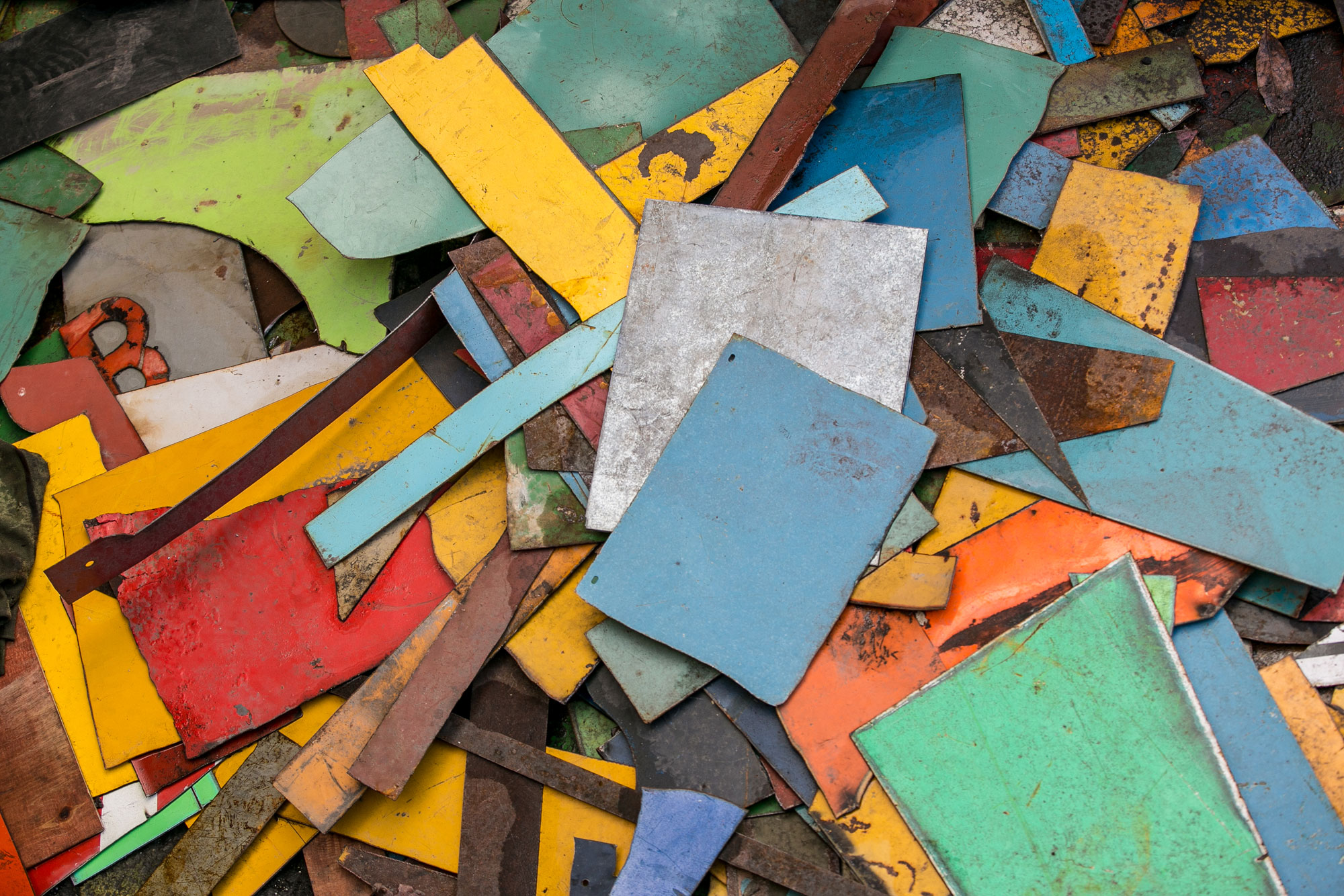 The metal comes from wrecked cars, tractors, anything the desert reveals.