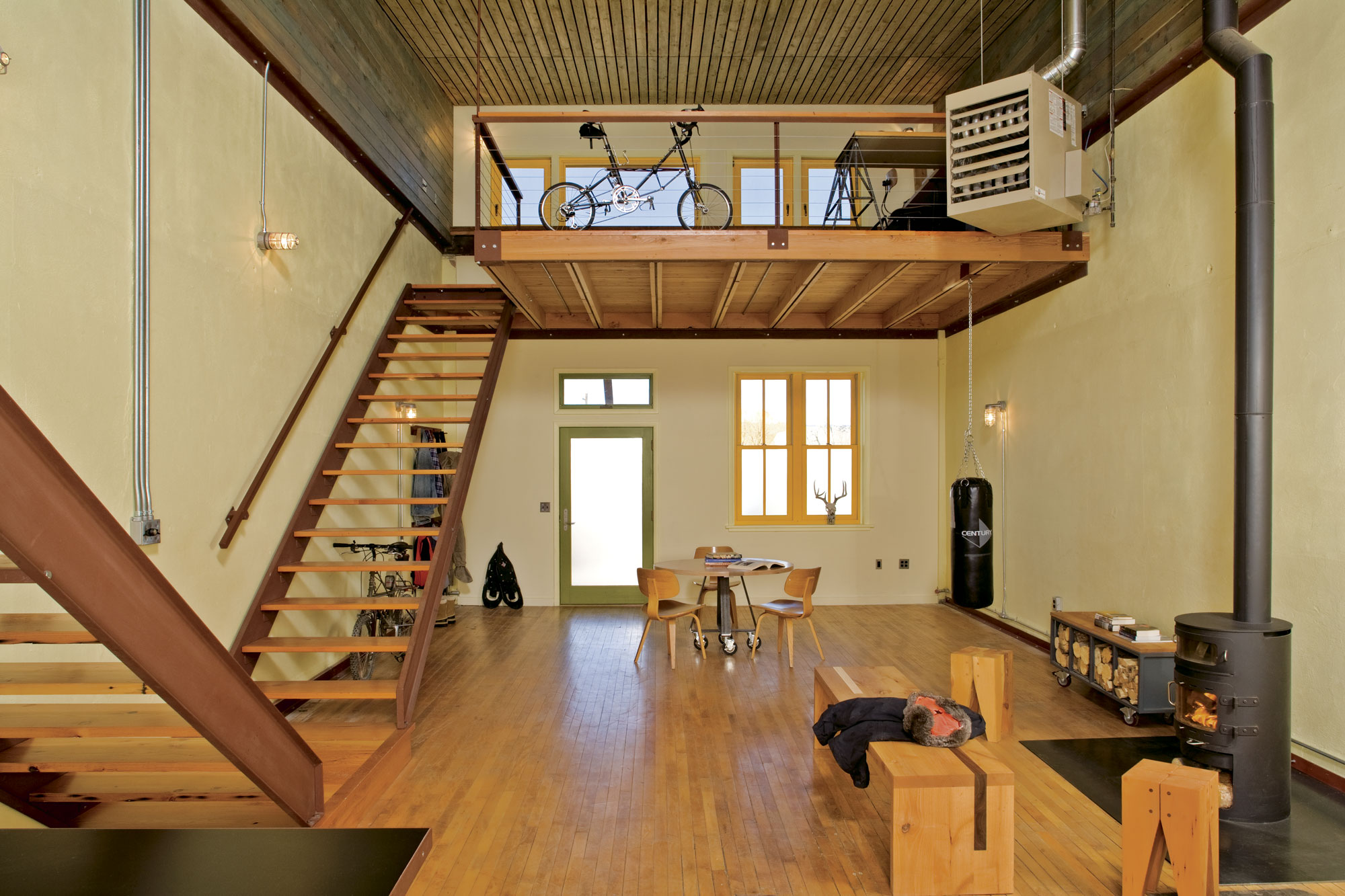 Maintaining its industrial roots, Fernau allowed for electrical outlets and structural elements to remain visible. Opposing stairs, made from materials recycled during the remodel, link two added loft spaces to the main floor.

01 Sep In the Studio: Richard Fernau

Clyde Park, Montana — population 310 — seems an unlikely place for an internationally renowned architect to establish a studio. Yet the loft-style space that Richard Fernau, of acclaimed Fernau + Hartman Architects in California, rescued from disrepair along this the town’s main corridor, is an ideal fit for the sensibilities of this philosophical and inventive modern designer.

“I’m a true believer in architecture,” says Fernau, who also teaches architectural theory at University of California Berkeley. “If it’s done right it can allow you to think new thoughts or live differently.”

Since the early 1980s Fernau has daydreamed about the possibility of returning to Montana. He and his wife, Sarah, had encountered the state on a road trip and dog-eared it in their minds as a place they both wanted to experience again. Fortuitously, in the 1990s, a client brought Fernau back to Montana for an extensive renovation on a ranch property. Fernau + Hartman worked on that project for eight years, spending time with his client on the property and in the surrounding communities.

The project was characteristic of the process for the Fernau + Hartman team, which often dedicates years to designing and building residences with the intent of “seeing beyond the cliché of a place, and instead really living in it in order to bring truthfulness and honest sensibility to the design,” explains Fernau. As a result, he admits that it’s not uncommon for him to feel a sense of loss when a project is complete. But when it came time to leave Montana, Fernau felt a sense of trepidation that compelled him to take action. Along with his wife and their two boys, he began looking for the ideal rural getaway: affordable, sustainable and respectful of the Montana way of life.

During Fernau’s time working with his ranch client, Clyde Park was the place to stop for a quart of milk or a beer at the local tavern. “I fell in love with this small town,” recounts Fernau. “It’s a particularly nice community and I felt it was worth investing in.”

After what seemed a fruitless search, the Fernaus were literally leaving Clyde Park, when they stumbled upon one last option. It was a warehouse building in the middle of town, nondescript, but available. Originally a bank in 1908 (the vault was still intact), then a barber shop, club meeting space, movie theater, gambling hall and a bordello, not necessarily in that order; the title search on the property showed that it was officially known as “The Bucket of Blood” building. Intrigued, Fernau jumped right in, dragging his family along.

After purchasing the building, the work began. The idea of “living differently” was the driving force in Fernau’s retrofit of the Montana getaway studio. He grappled with structural problems: a leaky roof, central heating, lack of natural light, finding privacy on a public street and figuring out how to design a space that would be as comfortable to live in as it was to work in.

“This space has challenged us to break out of our ritual patterns of living,” says Fernau. He likens it to living in a great, big wooden tent, all things under one roof. In the open plan on the main floor almost everything in the room is mobile — a Fernau-designed dining table and bench are both set on wheels; the pingpong table is easily disassembled; thick gymnastic mats can be folded and sistered to be used for a couch configuration, sleeping pad or exercise area. The only thing stationary in this central space is the compact kitchen. Located in a corner of the room it is utilitarian, with a small stainless steel Thermador range, open shelving and a porcelain sink outlined by a small counter that doubles as a bar with several stools clustered around it.

Balancing the long expanse of the main floor, Fernau added two lofts on opposite sides of the room. This second level functions to provide additional living areas, but also serves to break up the vastness of this industrial building. Two sets of stairs, the treads made from wood reclaimed during the remodel, lead to more private areas and offer a visual contrast to the otherwise linear interior.

Addressing the issue of privacy, one loft is a bedroom enclosed by wood slats for peaceful sleeping. Tall windows allow eastern light to filter onto an open landing.

On the other side is Fernau’s office, where a low, round coffee table is stacked with books on subjects as diverse as architectural theory, photography, fiction and local history. Along the wall behind a long, thin desk are framed awards and credentials for Fernau + Hartman Architects.

In contrast to his more traditional home and office in California, Fernau’s “urban homestead” challenges the idea of how to inhabit a space. As much a family retreat as it is his remote office, this building allows Fernau to focus on his theoretical work and makes room for him to play with ideas for designing furniture, an endeavor he has dabbled in over the years. But more than anything, when Fernau is here with the family, the space prompts them to shrug off the usual patterns of living and reconnect with each other.

An unforeseen benefit of the studio’s location is that by sheer proximity — the only grocery store within 30 miles is right next door, the Shields Valley Community Center is across the street and the nearest bar is just at the end of the block — Fernau has become a part of the Clyde Park community. He and his family know their neighbors; they greet one another by name on the street and talk at the local farmer’s market. From his upstairs office, there is a view of the Bridger Mountains in the distance and a close-up of Miles Street through a series of high windows. Between architectural sketches and reading, Fernau glances out on what he calls the “theater of the street,” where locals come and go from the grocery; delivery trucks unload goods and activities wax and wane. “It’s better than television,” quips Fernau with a smile.

Photographer JK Lawrence is halfway through her second decade as an award-winning architectural and interiors photographer. She is one of the most sought-after photographers in the West. Her clients include designers from Seattle to New York, and her photography appears in publications that include The New York Times Magazine, Big Sky Journal and Sunset Magazine. 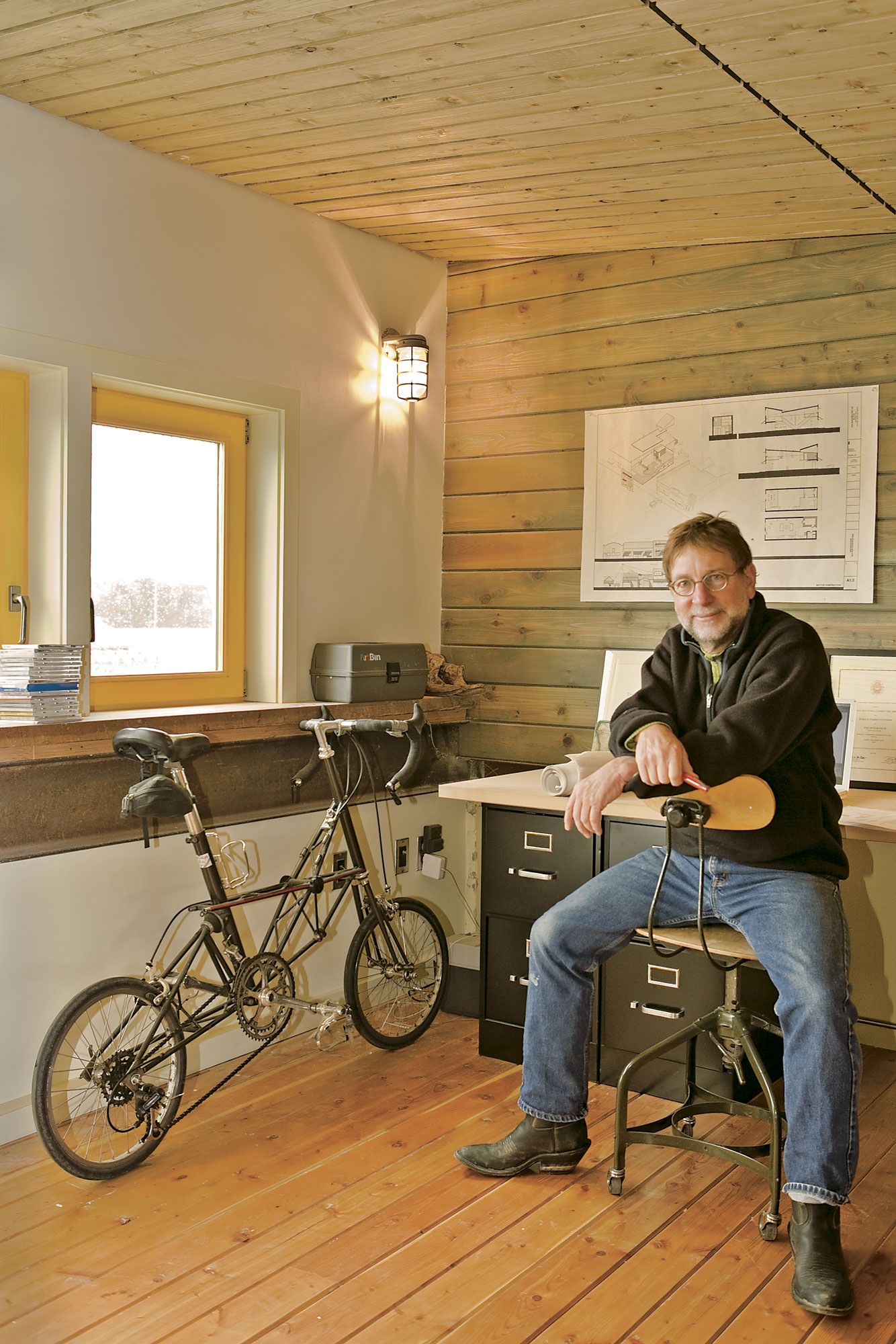 From his loft studio, architect Richard Fernau enjoys the “theater of the street” by glancing out a bank of windows that overlooks Clyde Park’s town center. 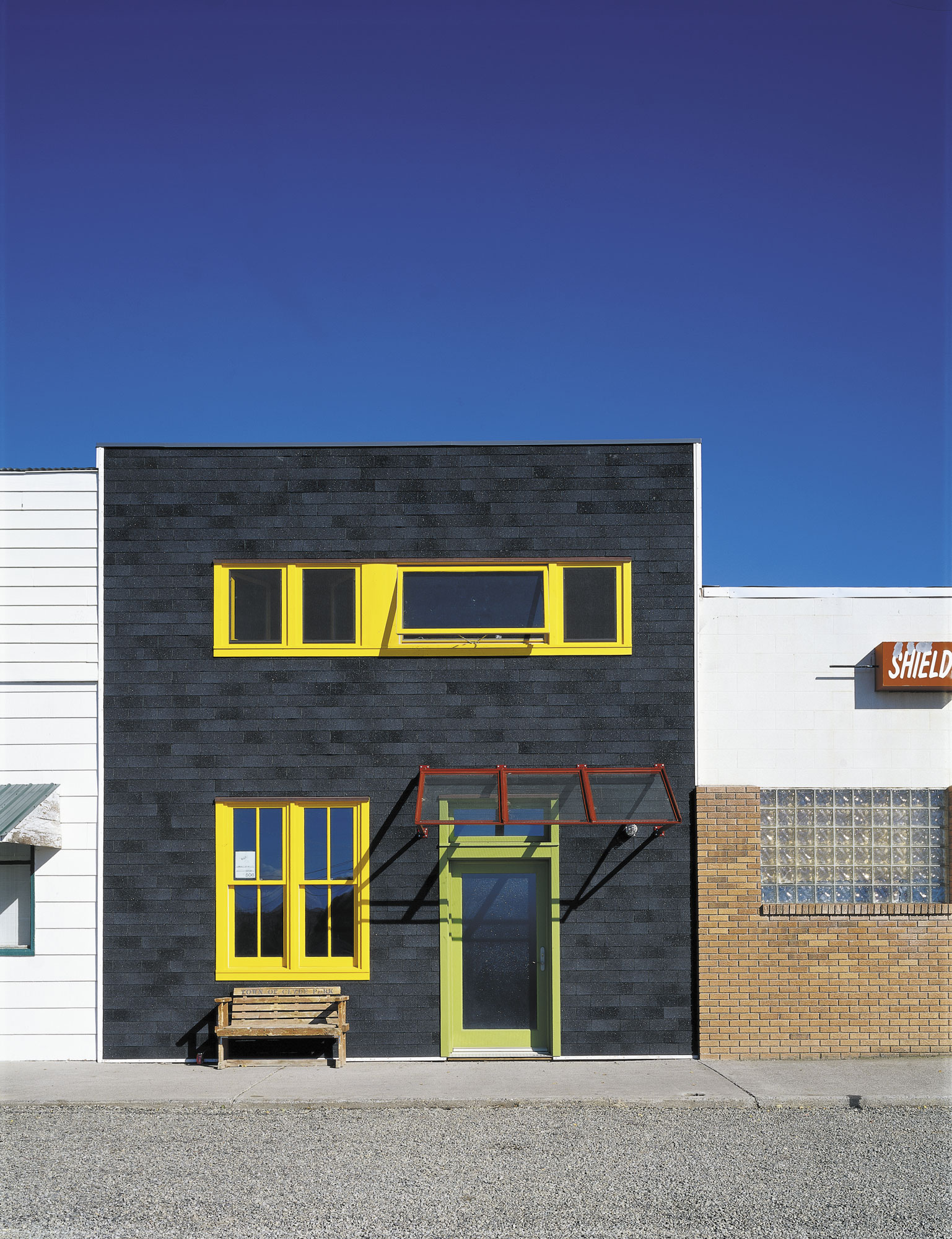 Sandwiched between the local grocery store and another business, Richard Fernau’s Montana studio breathes new life into a building that was originally a bank in 1908 and eventually became known as “The Bucket of Blood” building. 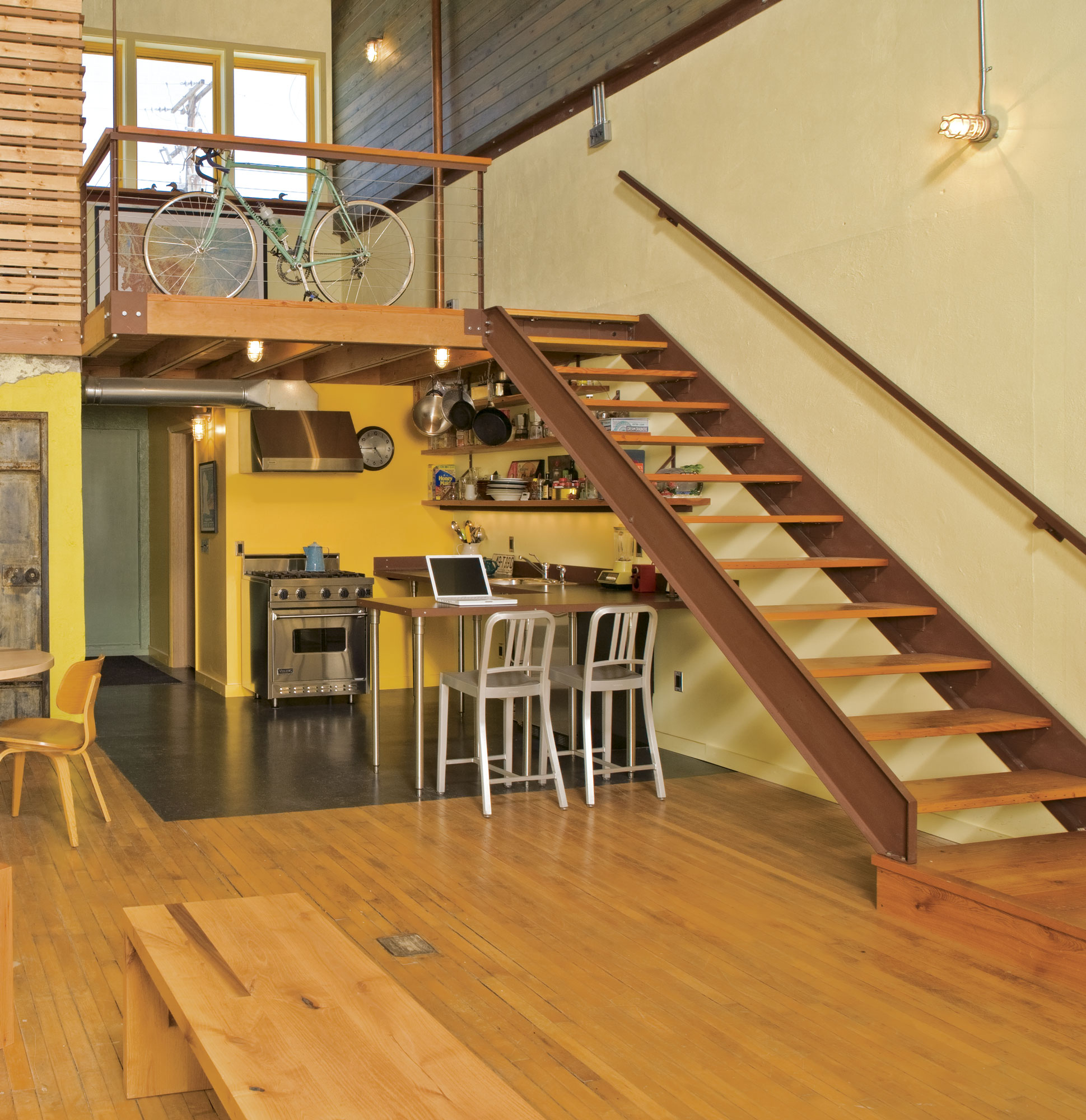 The idea of “living differently” in this studio persuaded the Fernaus to maintain a kind of minimalist existence here; even the kitchen is reduced to the most necessary possessions.