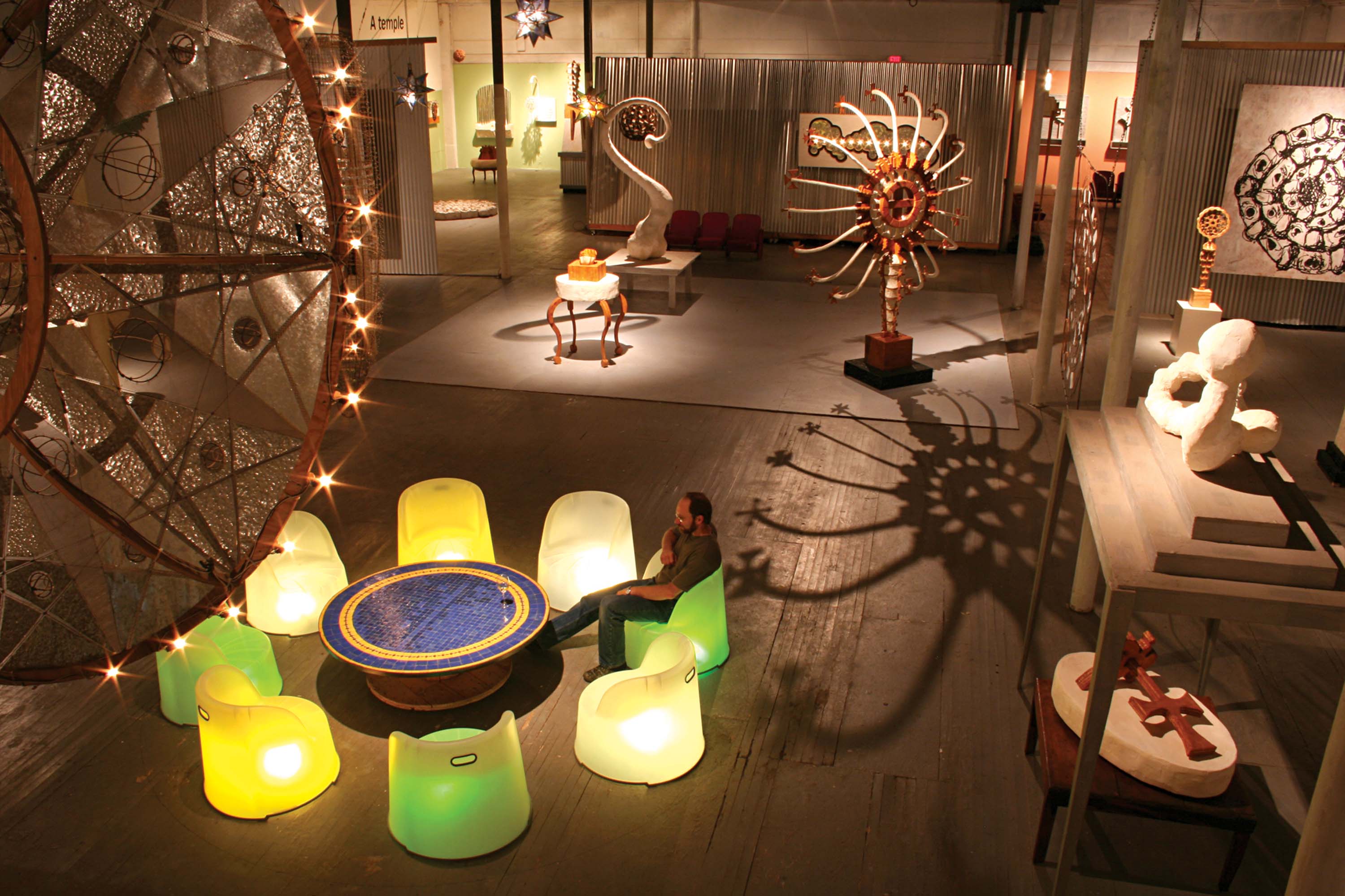 Years of renovations were required to turn a crumbling century-old department store in Winslow, Arizona, into the vibrant living/working studio and gallery called Snowdrift.

01 Apr In the Studio: Snowdrift

Dan Lutzick was first offered a space that seemed perfect for a studio and gallery in 2000, but the timing wasn’t right. When it was offered again in 2002, Lutzick jumped at it, even though the price had doubled.

The natural assumption is that artists are not always savvy businesspeople. But in this case there’s no need to worry that Lutzick paid an inflated price. Even though the original cost of $1 had jumped to $2, he pulled the trigger on the deal.

Dan Lutzick was first offered a space that seemed perfect for a studio and gallery in 2000, but the timing wasn’t right. When it was offered again in 2002, Lutzick jumped at it, even though the price had doubled.

What Lutzick acquired for his deuce was a great shambling building in downtown Winslow, Arizona, on Historic Route 66. The former Babbitt Brothers mercantile store was a hulking, cavernous space that looked to be teetering toward ruin. A large hole had been smashed in the back wall; water poured through the roof; the basement was a pond and a flock of pigeons had taken up residence. In real estate parlance, it was a “fixer-upper.”

Lutzick, a sculptor and process artist who often works big, was able to look beyond the despair. What he noticed was 22,000 square feet of sprawling space, the soaring 16-foot-high pressed tin ceilings and oversize skylights.

“When I moved into the building it was in such bad shape that I had one small bedroom I actually wallpapered in corrugated tin because when it rained, water came down the walls so badly it would ruin anything else,” Lutzick recalls. “Outside of that room my rear wall was collapsing, and there were pigeons flying around. For about three months my days consisted of taking down the chain link across the hole in the back wall and throwing stuff out of the building.”

It was a massive, daunting, impossible project but Lutzick already had experience with those. He graduated from the University of California Irvine with a degree in fine arts in 1994 and moved to Winslow that same year. He was a partner, along with Allan Affeldt and Tina Mion, in the restoration of La Posada Hotel. Designed and built by famed architect Mary Colter, La Posada was the last of the great rail-road hotels. It closed in 1957 and was slated for demolition before the three stepped in and returned the property Colter considered her masterpiece to its former grandeur.

When Lutzick first moved to Winslow, he occupied a vacant post office, a 3,000-square-foot space he converted to his first studio. Describing himself as a process artist, Lutzick creates his sculptures using salvaged materials and a shopping list of items more likely found at a construction site than at an art supply store: plywood, rebar, baling wire and roofing tar.

“I love the edge of plywood because it’s layered. It’s all about addition,” says Lutzick. “So it lends itself to an organic process. Organic processes involve growth and they involve layers.”

In his art, Lutzick maintains a healthy respect for his materials and doesn’t try to alter their true nature. The rough-hewn components come together to form pieces that are surprisingly expressive and animate. They seem to cluster in small groups, endowing the large space with a sense of intimacy. Many are draped with lights, giving them an entirely different character in the evening than they have at noon. There are flashes of Southwestern themes and some recurring images of rabbits, ants, spiders, sacred hearts and crowns in the art. It is a vivid, striking collection that works very much in concert. It’s no wonder they remind Lutzick of “little living objects.”

Snowdrift acquired its name from a faded advertisement painted on the side of the building touting a brand of pure vegetable shortening. Never one to discard anything, Lutzick touched up the sign and opened the gallery in 2005. Lutzick, his wife Ann-Mary and a herd of rescued dogs and cats live in a large loft overlooking the first floor. Beneath the 10,000 square feet of exhibition space is a basement of equal size, now utilized as working studio, storage room and small-scale exhibition space for works in progress. And they almost all qualify as works in progress.

“In my mind, most of these pieces aren’t finished,” admits Lutzick. “I have no qualms about altering things, taking them apart and enlarging them. To be honest though, they never get smaller.”

The gallery is open by appointment and during special events. The sculptures are rotated but not as frequently as in the past, Lutzick confessing that he “likes the story they tell.” Reclaimed doors, windows, shelves and old signs help frame galleries within the exhibition space.

“Eventually theses pieces will appear in front of a particular background and something will click,” says Lutzick. “Then all of a sudden it becomes part of a community and fits into a neighborhood of pieces. Then I’ll bring another piece in and another piece in and they have this interaction. And most artists never get to do that. It’s what makes this space so important to me.”

For art lovers and those interested in the process, Dan Lutzick spent his $2 wisely. 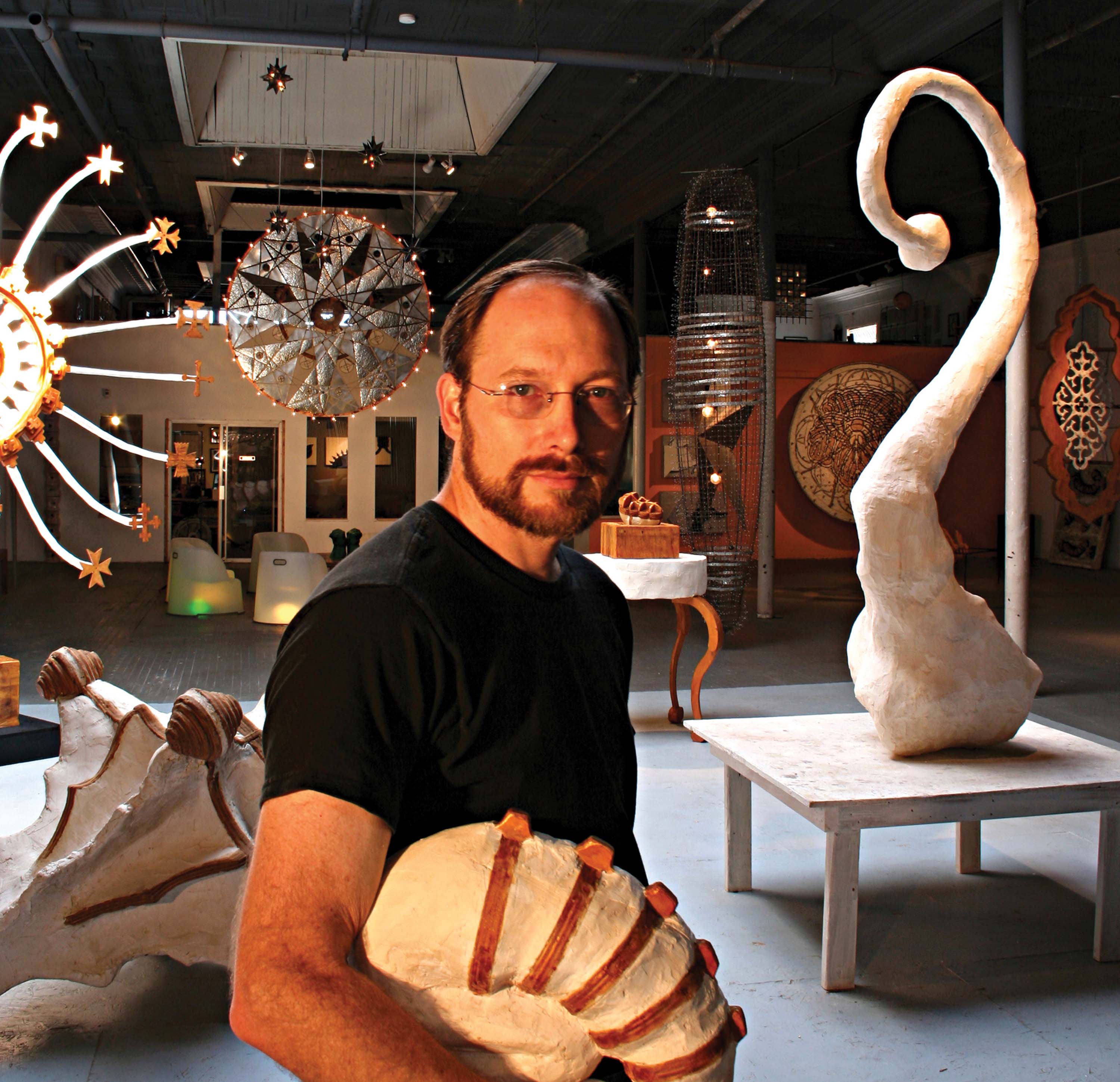 More than just a gallery, Dan Lutzick has created an alternative world populated with his intimate and expressive sculptures.

Lutzick has converted the 10,000-square-foot basement into a working studio, where he creates sculptures from construction material such as plywood, rebar, bailing wire and galvanized tin. 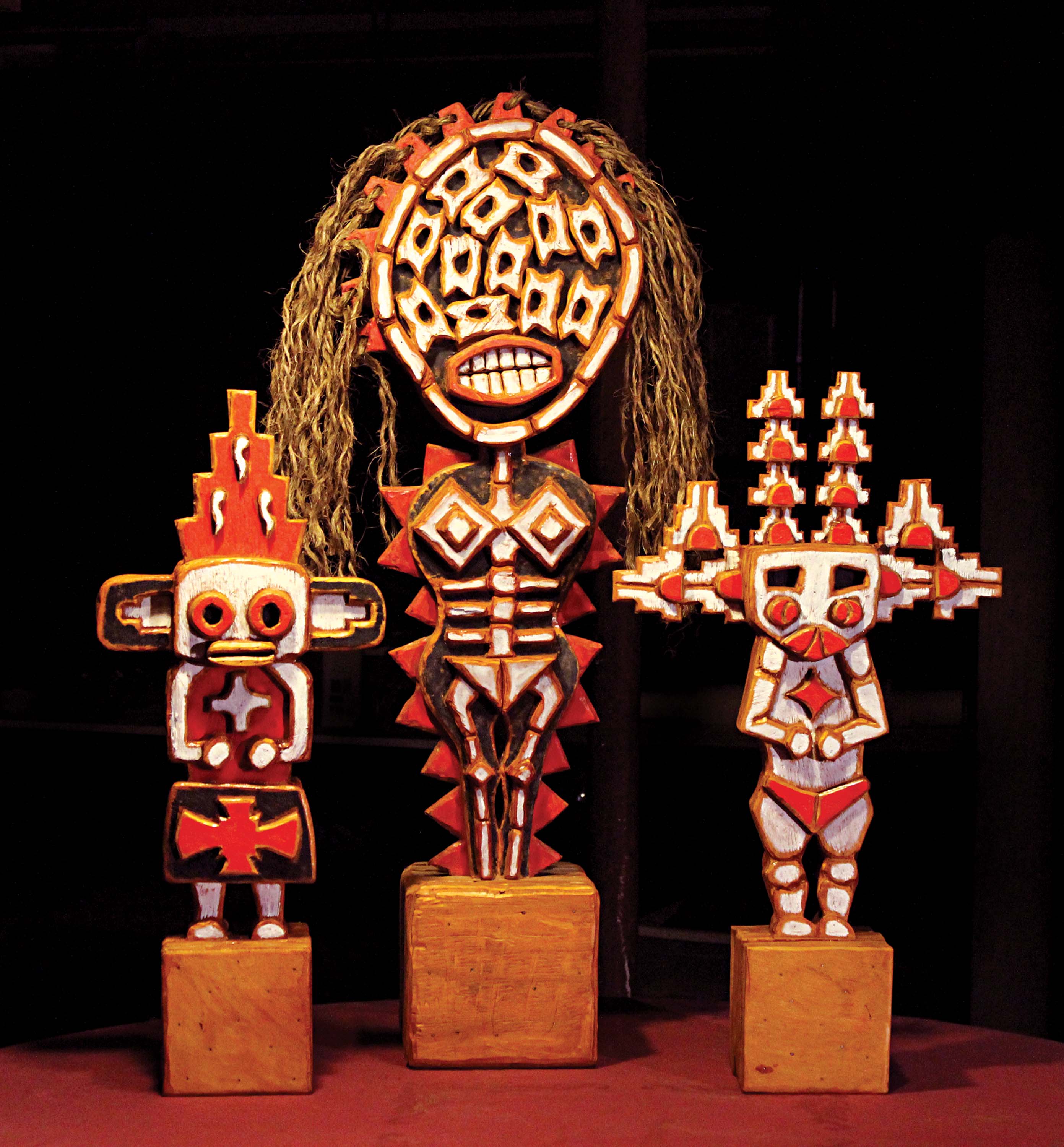 Although Lutzick often works on a large scale, he does create smaller pieces, such as these plywood and paint sculptures ranging from 30 inches to 41 inches tall. 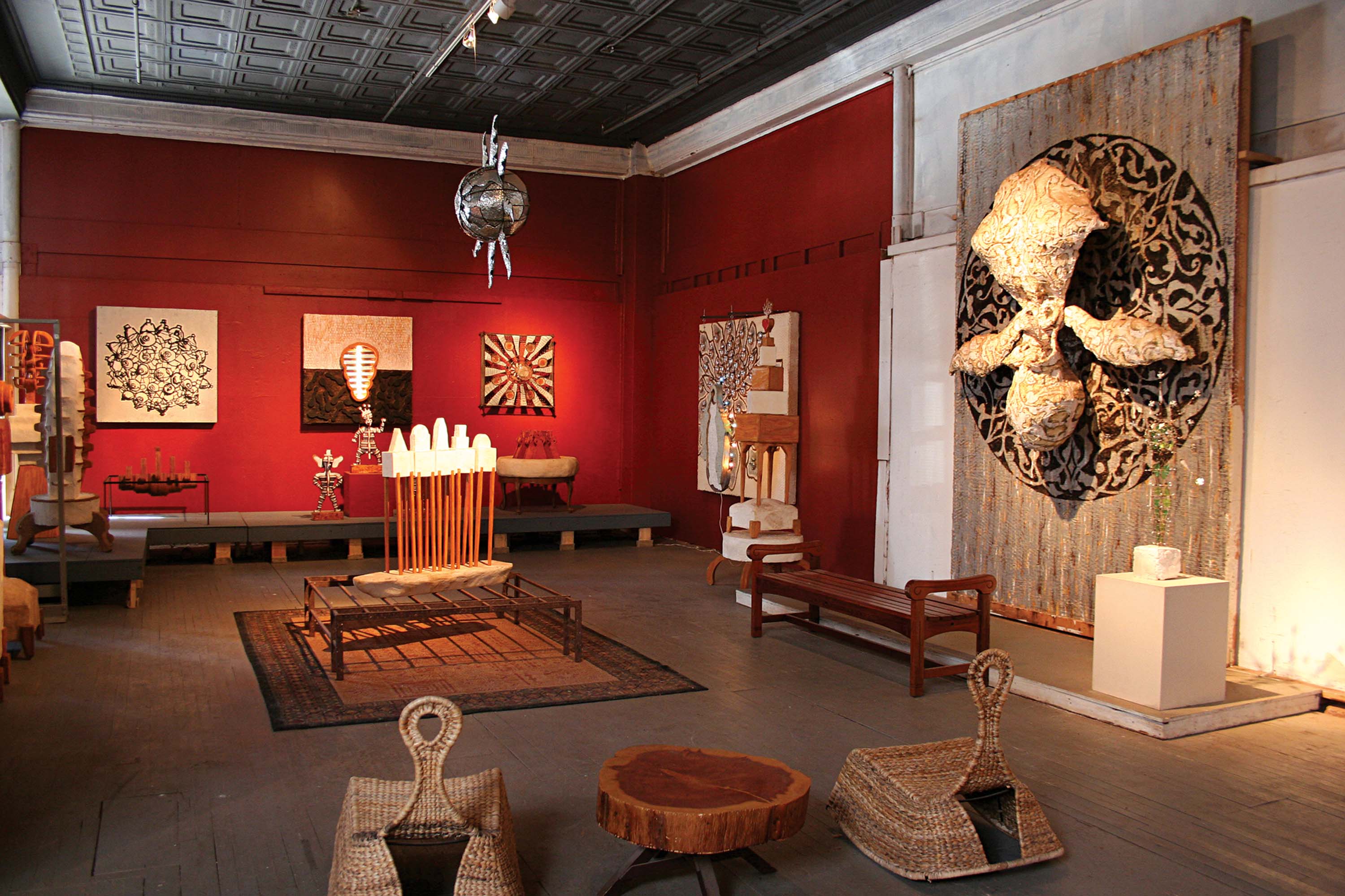 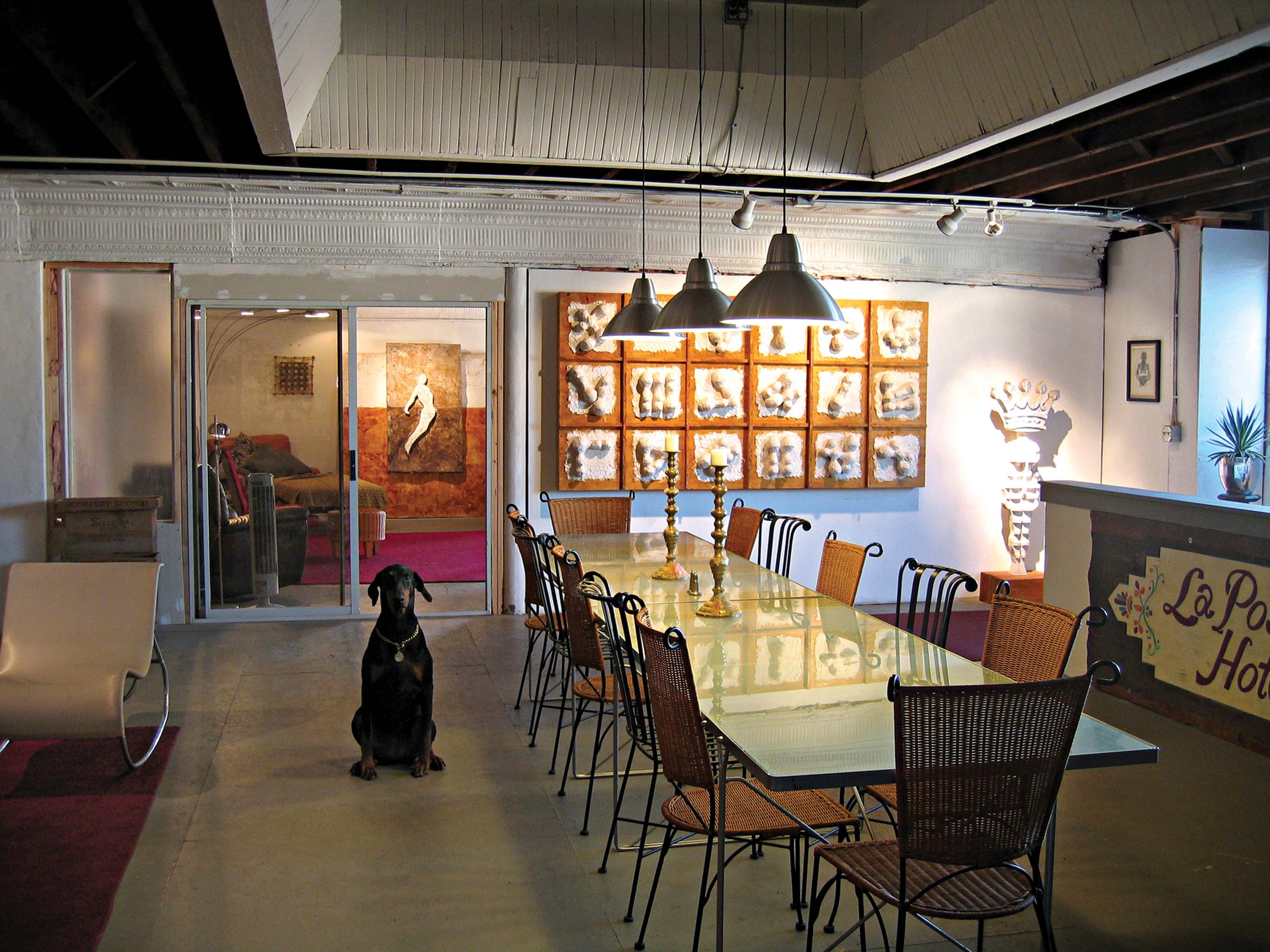 The upstairs once housed the offices of the former department store but now serve as a loft living space for Dan and Ann-Mary Lutzick. Sophia the Doberman is one of several rescued animals that also call the Snowdrift home. 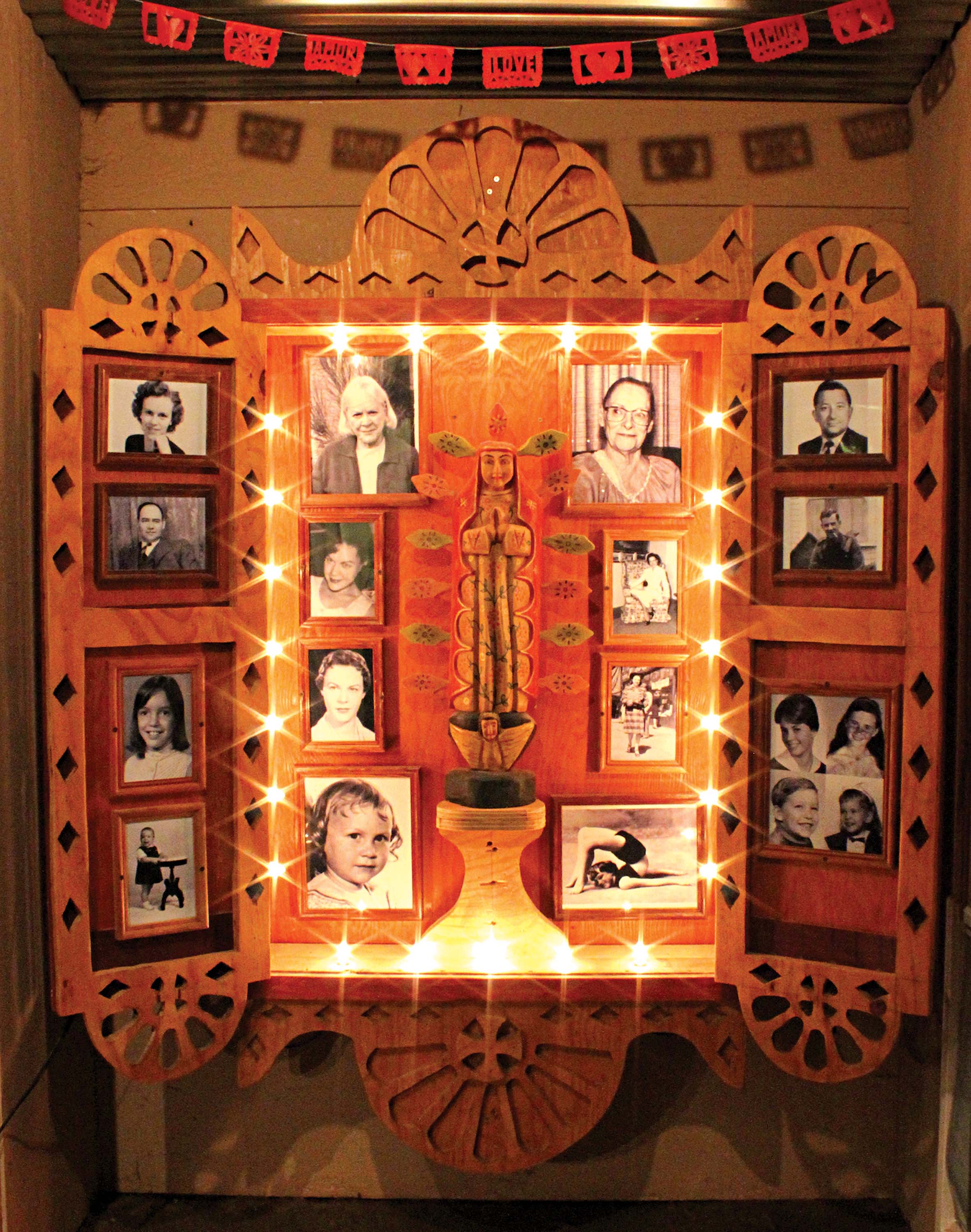 Connecting to the past is an obvious passion for Lutzick. It’s a recurring theme evident in this family altar tracing the life of his mother and Ann-Mary’s mother.