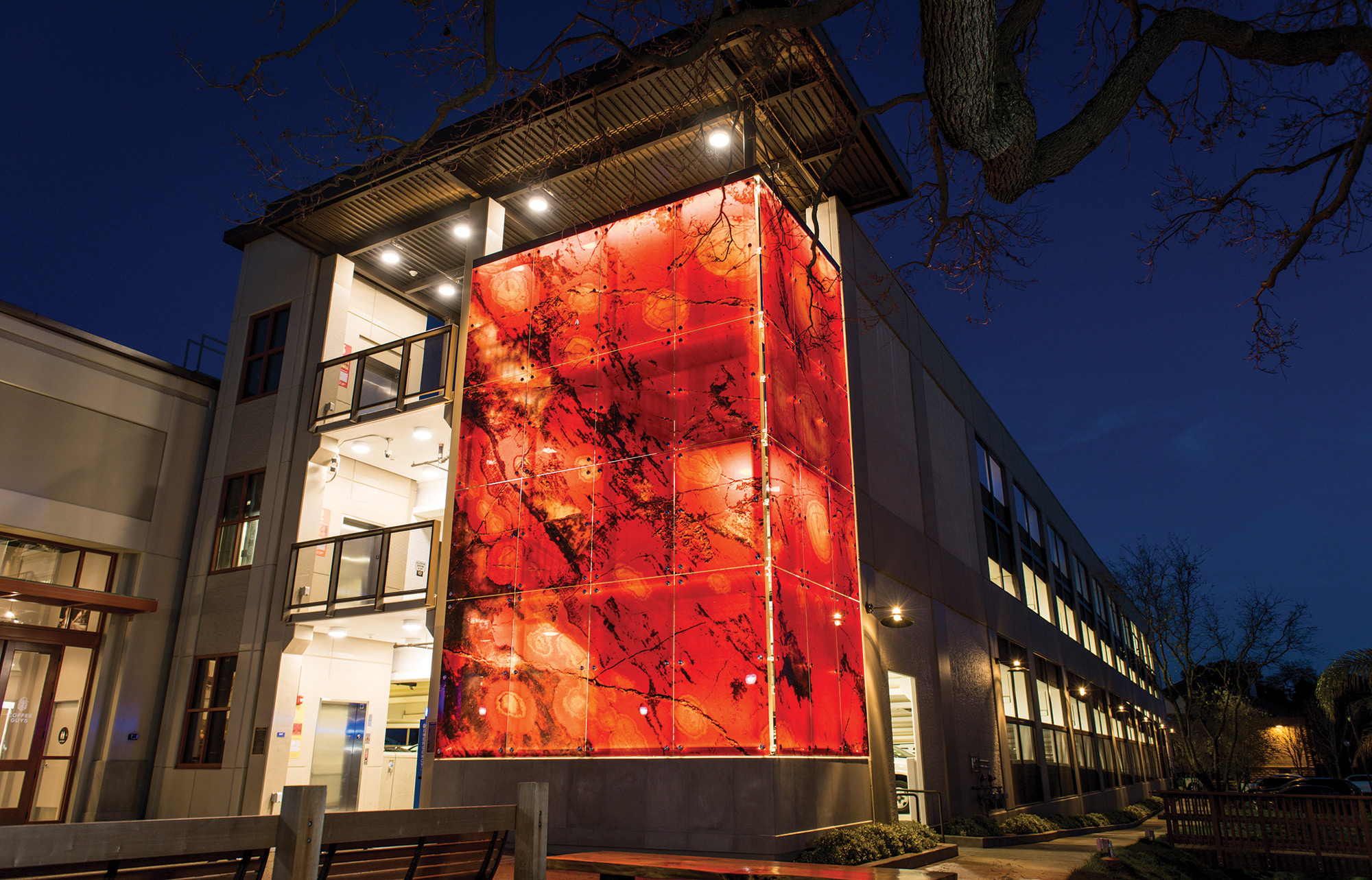 "Poppy Jasper" was a second installation at the Morgan Hill parking garage. It provides a colorful, lantern-like glow in the stairwell. Photo: Israel Valencia

19 Jul In the Studio: The Bigger, The Better

In his Napa Valley, California, workshop, Gordon Huether is raised more than 15 feet in the air, treading a high wire, his hands gripping a balancing pole. Could this be a metaphor for the many projects he must balance?

Huether, who specializes in large-scale art, is knee deep in a five-year, multimillion dollar, multi-installation commission for the Salt Lake City International Airport, and he’s juggling at least a dozen other contracts.

In addition to a potential metaphor, the balancing act is also one of his artworks. This Gordon Huether is a statue, a white, high-density foam replica he cast of himself. It’s a project mock-up he completed for the Raleigh-Durham International Airport in North Carolina, one of seven life-size sculptures he created for installation in the baggage claim, called Highwire Travelers.

Today, Huether hovers over a hub of activity inside a voluminous fabrication warehouse, aka his studio. Here, a coterie of artisans may be sheering the contours of a mountain range across rusted metal or running outside to navigate a forklift.

Even if you have never heard of Huether, you’ve probably encountered one of his towering works. His monuments hold court in airports, medical centers, civic buildings, corporations, high-end residences and universities from Albuquerque, New Mexico, to Chapel Hill, North Carolina, Houston, Texas, and Jacksonville, Florida. He’s logged more than 30 years in making majestic things. The 57-year-old Napa resident has installed more than 75 public art projects and completed in excess of 200 private art commissions. His works also appear internationally, including sites in Germany, Hong Kong, Japan, Australia and others. His goal is clear: “My mission in life is to inspire humanity by bringing beauty into the world through art.”

Huether often relies on salvaged goods and weathered materials, utilizing bronze, aluminum, steel, glass or “ultimately what best serves the goals of the project,” he says. Case in point: The artist used recycled car headlights for the body of a tarantula sculpture that was hoisted via crane to perch on the exterior of a parking garage in Morgan Hill, California. And yes, there was a reason for the 16-foot arachnid that lights up at night, for the tarantula is indigenous to the area. “I focus on content that tells a story,” he says, “either directly or inferred to create a connection between the person and the art.”

While Huether banks on his imagination, his director, general manager and significant other, Darcy Tunt, helps to develop the business strategy that covers both public art and private residential commissions. She also wears the hat of de facto “Details Guru,” organizing everything from speeches to client meetings. “Yes, generally I help keep Gordon and our entire staff [of 14] on track and focused,” Tunt says. “We have a great team. So, with all the projects we have going on, and Gordon’s schedule, there’s a lot for me to manage.”

While footsteps and grinding machinery echo off cement floors from below, upstairs you hear keyboard taps and muffled voices. Staffers crunch revenue numbers or post updates on social media. The administrative offices perform the behind-the-scenes nitty gritty. Tunt is often in her office, coordinating Huether’s calendar or taking calls from clients.

The 15,000-square-foot studio is where creativity is unleashed and visitors are inspired. Throughout the week, guests drop by for a glimpse of the art process and have the opportunity to purchase Huether,s fine art, paintings, sculptures and art glass from the front gallery.

“It is a dream studio, for sure,” says Huether. Leaning back on a chair in his modern meeting room, the bemused artist comes across casual with an easygoing nature. Huether is clad in jeans, a T-shirt and a baseball cap that rests backwards — his signature look. He is pleased with his white-wall space where plenty of windows ensure that light streams in throughout the day.

He worked out of a former tannery for 20 years, but as more clients came calling with more challenging demands, it was time to expand. He found the current studio location upon seeing a “for sale” sign in the window of the original hay barn. “It was simply a shell, plus two toilets and a water spigot,” Huether says. But he envisioned what it could be. The artist purchased the lot and immediately became his own architect. At the time, the income from commissioned projects carried him through the recession of 2008 when he opened the studio. Huether invested $1.5 million for renovations. The façade is constructed of handsome matte-black steel, a far cry from the crumbling cinderblocks of his former digs.

Today, past the glass doors behind the gallery, lies the 25-foot-high fabrication workshop where all the magic happens. It’s a tinkerer’s dream: noisy, crazy and nerve-wracking all at once. The center features a series of large work tables and the outlying areas feature a metal shop, woodshop, glass shop and storage. There are gadgets and machines, lots and lots of them. A recent purchase was a high-end waterjet cutter used for slicing through glass, metal and rock. Other gear includes welding equipment, band saws, an automated sandblasting machine, a handheld plasma cutter, a 15-foot forklift that can carry up to 4,000 pounds, a 19-foot scissor lift and more.

His current building is 40 percent larger than the previous one. With rollup garage doors and sitting on an acre of land, the new facility makes it easier to maneuver the big rigs. Huether’s pieces are so gargantuan they often have to be delivered on flatbed trucks in sections. For the LBJ Presidential Library in Austin, Texas, for example, he was tasked to create something special to honor the memory of Lady Bird Johnson. The result was a 16-panel mural, each piece 10 feet high and 4 feet across, of fused glass with photographic images of the president’s wife, family and beloved Texas flowers.

Glass is often used in Huether’s work, and for good reason. When Huether was in his teens, his father gifted his son with a stained-glass art kit, “mainly to keep me out of trouble,” the artist says. On the first attempt, he admits he made “the world’s ugliest stained glass window.” After that, he redoubled his efforts and made a larger and better piece for a living room window, and this was when he fell in love with light and color. By age 17, he knew he wanted to make large-scale art all over the world “that would make a lasting impact on humanity.”

And yet, Huether was a rabble rouser. He quit high school. He spent three months in juvenile hall. He was kicked out of the Navy after two days. But art kept calling. Huether snagged an informal apprenticeship at the Universal Glass Studio in Blieskastel, Germany, and later took courses at the Pilchuck Glass School in Stanwood, Washington. Eventually, the young man found himself returning to the Napa of his childhood, determined to become a stained glass artist. And soon after, he expanded his medium.

In 1986, his first taste of public art came when he won a competition for a large-scale piece for the University of Alaska’s Geophysical Institute in Fairbanks. It was 20 feet long and 9 feet high, and “probably the smallest thing I’ve ever done since,” he reflects, adding that after the “big break came,” there were a series of smaller breaks. The next significant contract came from Stanford University’s biomedical research facility. He made a curtain wall where he and his artists developed a way to laminate multiple layers of glass. The process was so unique, Huether secured a patent.

One of his proudest achievements debuted recently at the Culinary Institute of America at Copia in Napa. On the top of an existing 75-foot tower sit sculptures of Robert and Margrit Mondavi of Robert Mondavi Winery, credited for founding Copia and putting Napa Valley on the map for wine tourism. These close friends of Huether’s, now deceased, are portrayed sitting down, toasting the valley. The unconventional artist used 3-D rendering software to scan photographs and later crafted their images in a special, high-density white foam. He and his team finally coated the pair with resin for weatherproofing.

When in the community, he takes opportunities to speak to youth, especially with an encouraging message for at-risk kids. “My message to them is, ‘You can do it! Find out who you are and then go after that with all your heart. Be prepared to lose and be rejected; it’s a part of succeeding,’” he says.

On non-travel days, the artist heads into the studio by 7:30 a.m. and reads his emails. His office space near the workshop consists of a computer, desk, chair and the giant red letters N-O posted on the wall. Yes, signs of the rebel run deep, but this feisty one has managed to become one of the most successful public artists of his time.

“Most artists don’t have a studio to build everything, but I do,” he says, looking around with gratitude. “There is a lot of stress and overhead, and I like it. I love it.” 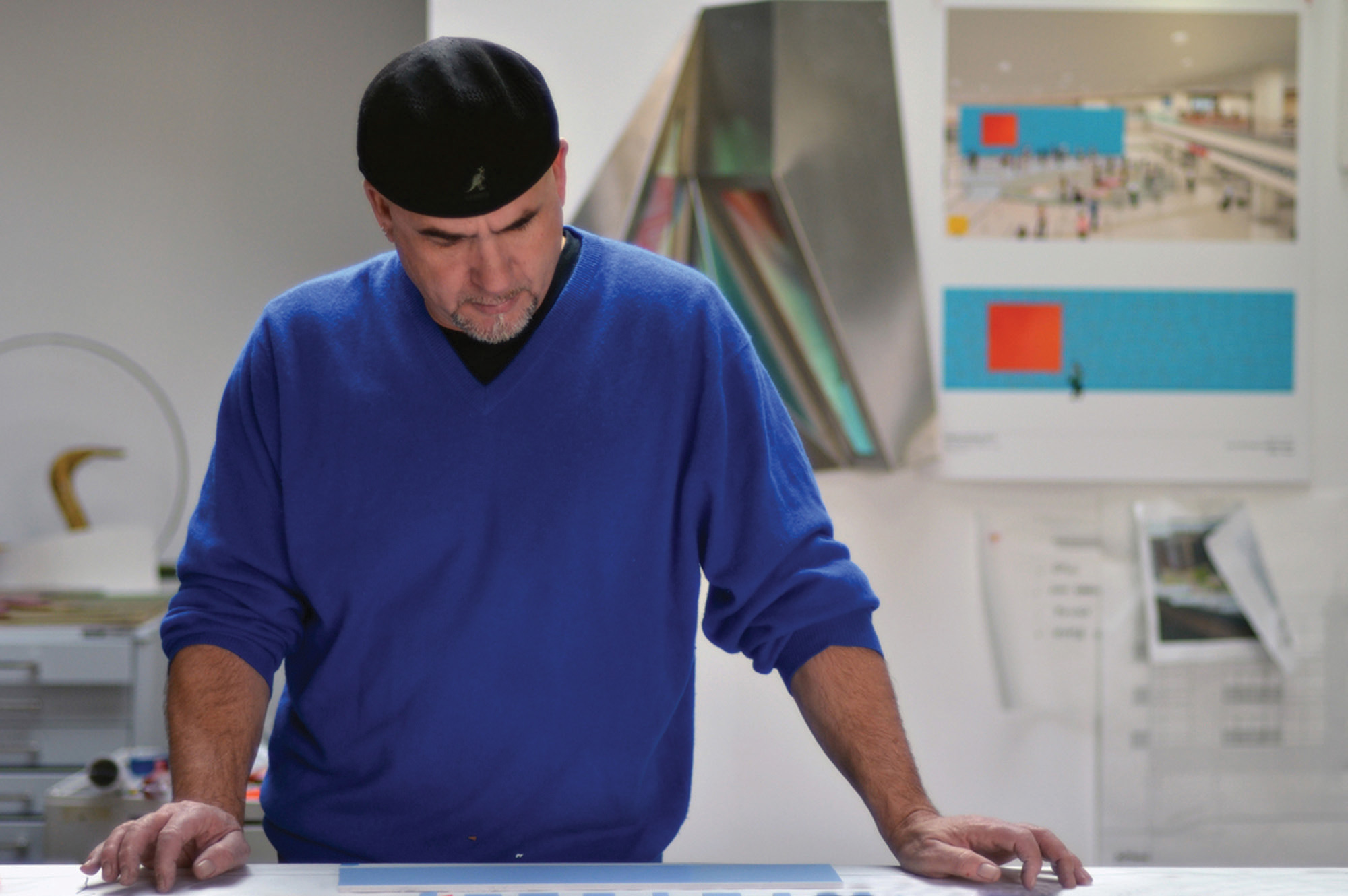 Gordon Huether considers his next approach in his Napa Valley studio. The artist has been creating public art projects, commissions and fine art for more than 30 years. Photo: Joey Colombo 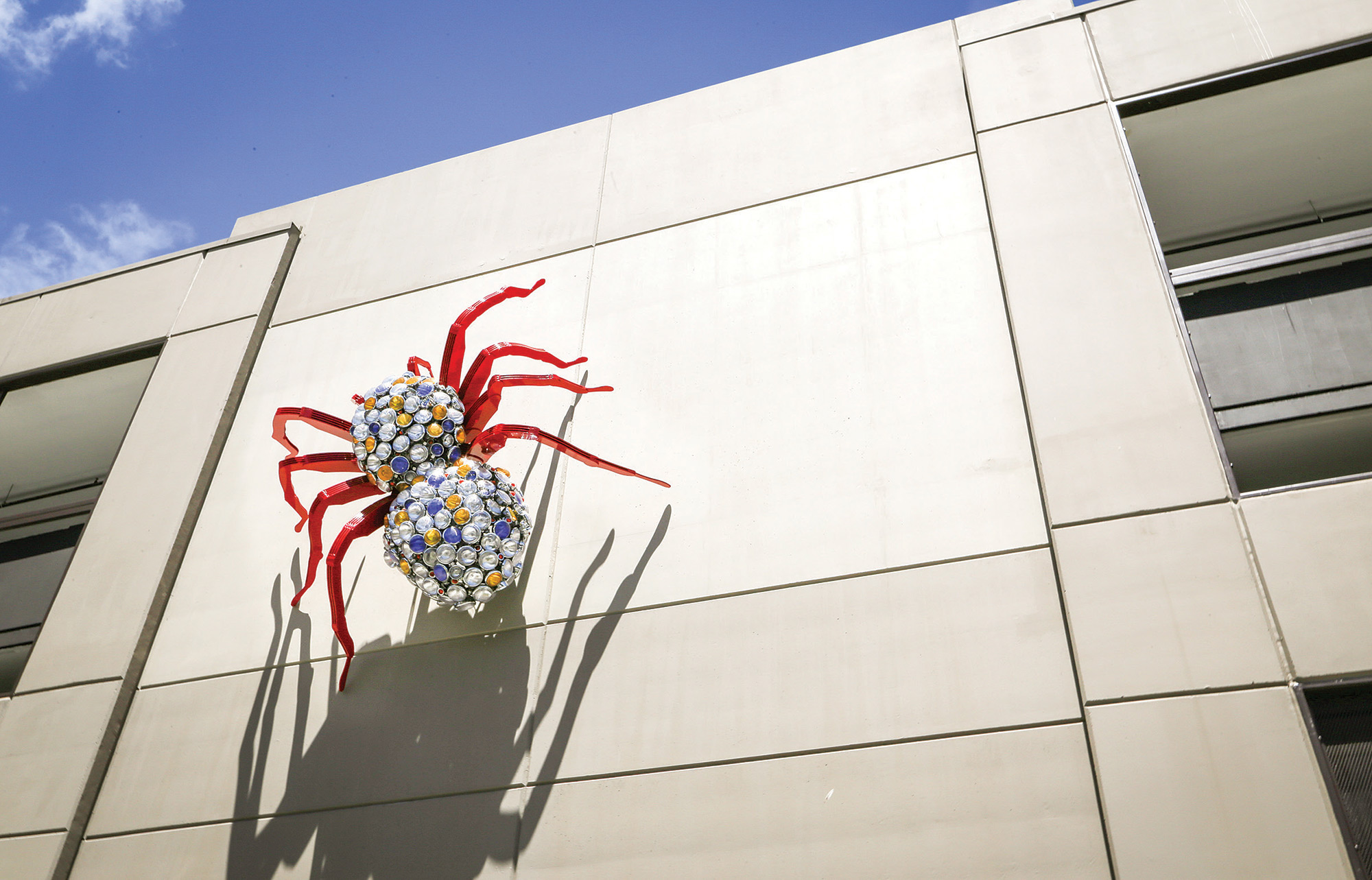 “The Tarantula,” made from recycled headlights, climbs up a parking garage in Morgan Hill, California. Photo: Partners 2 Media 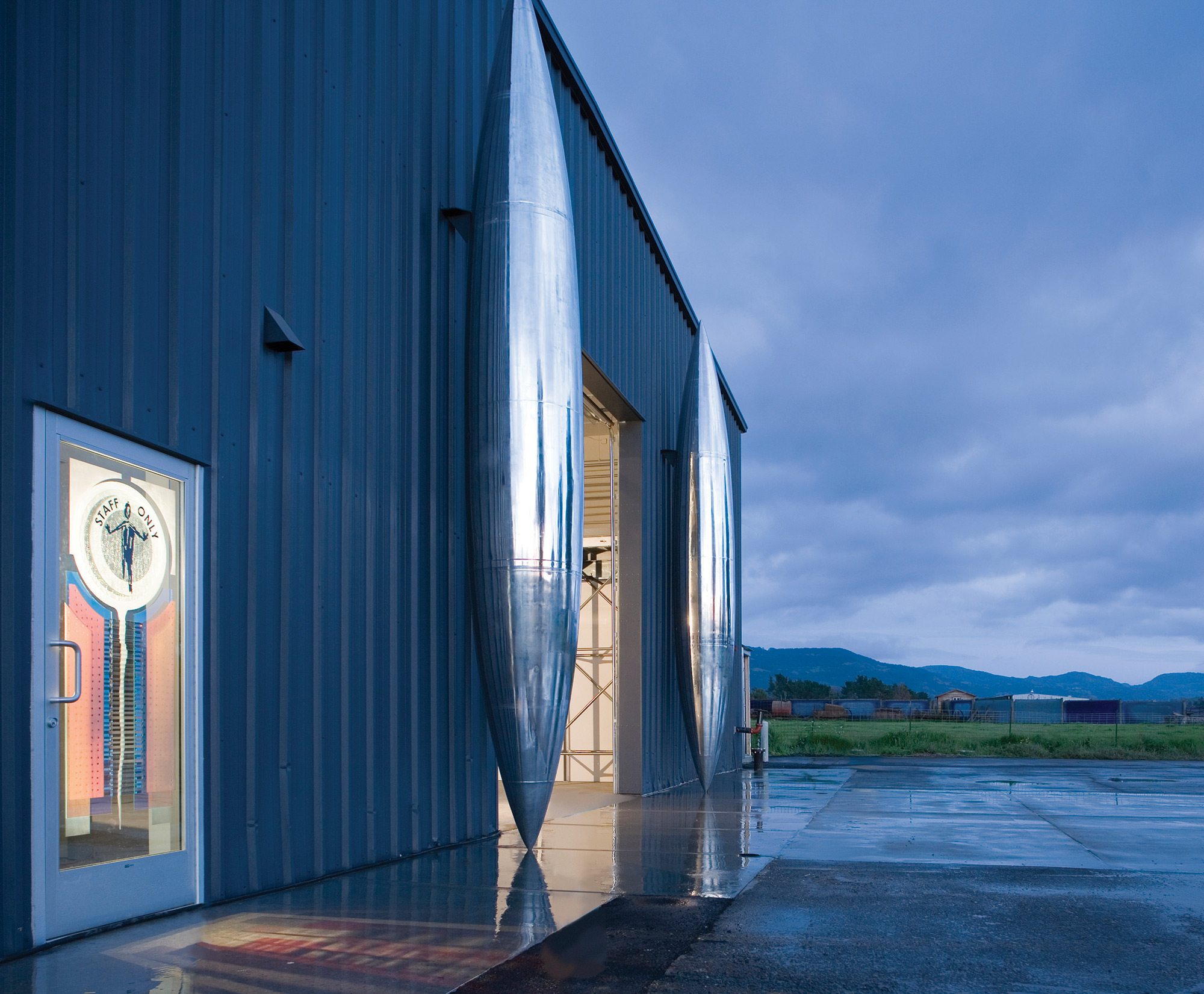 Huether’s studio was originally the site of a hay barn. Photo: Misha Bruk 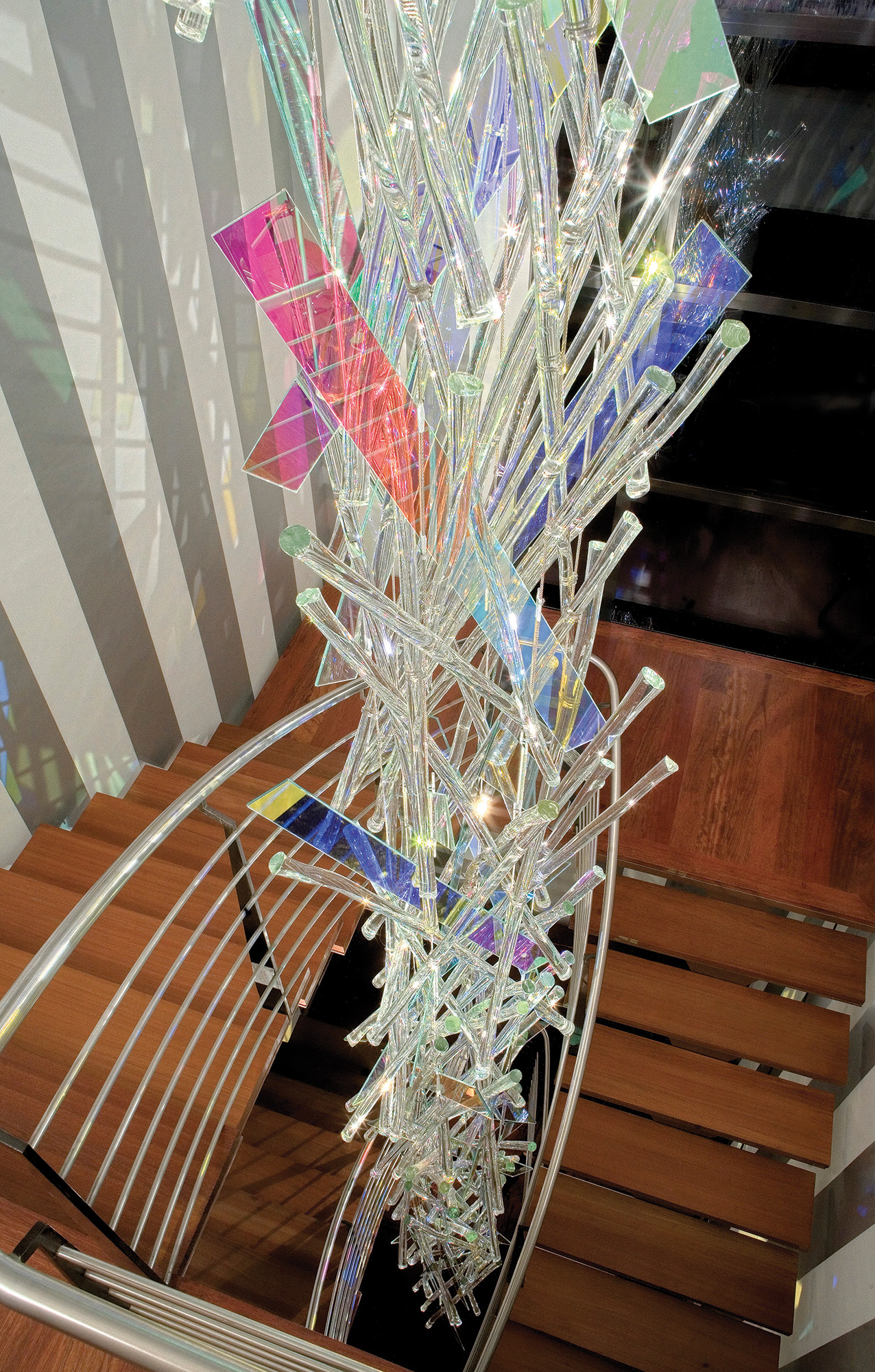 “The Rock” is a 38-foot-tall sculpture designed for a private residence. Jeremy Cline created the glass rods at Huether’s direction to resemble driftwood. Photo: Misha Bruk

Huether at work on the conceptual phase of a commission for the Salt Lake City airport. The project was one of the largest of his career. Named The Canyon, the installation appears on the east and west walls of the central terminal, spans 362 feet and consists of almost 800 individual “fins.” 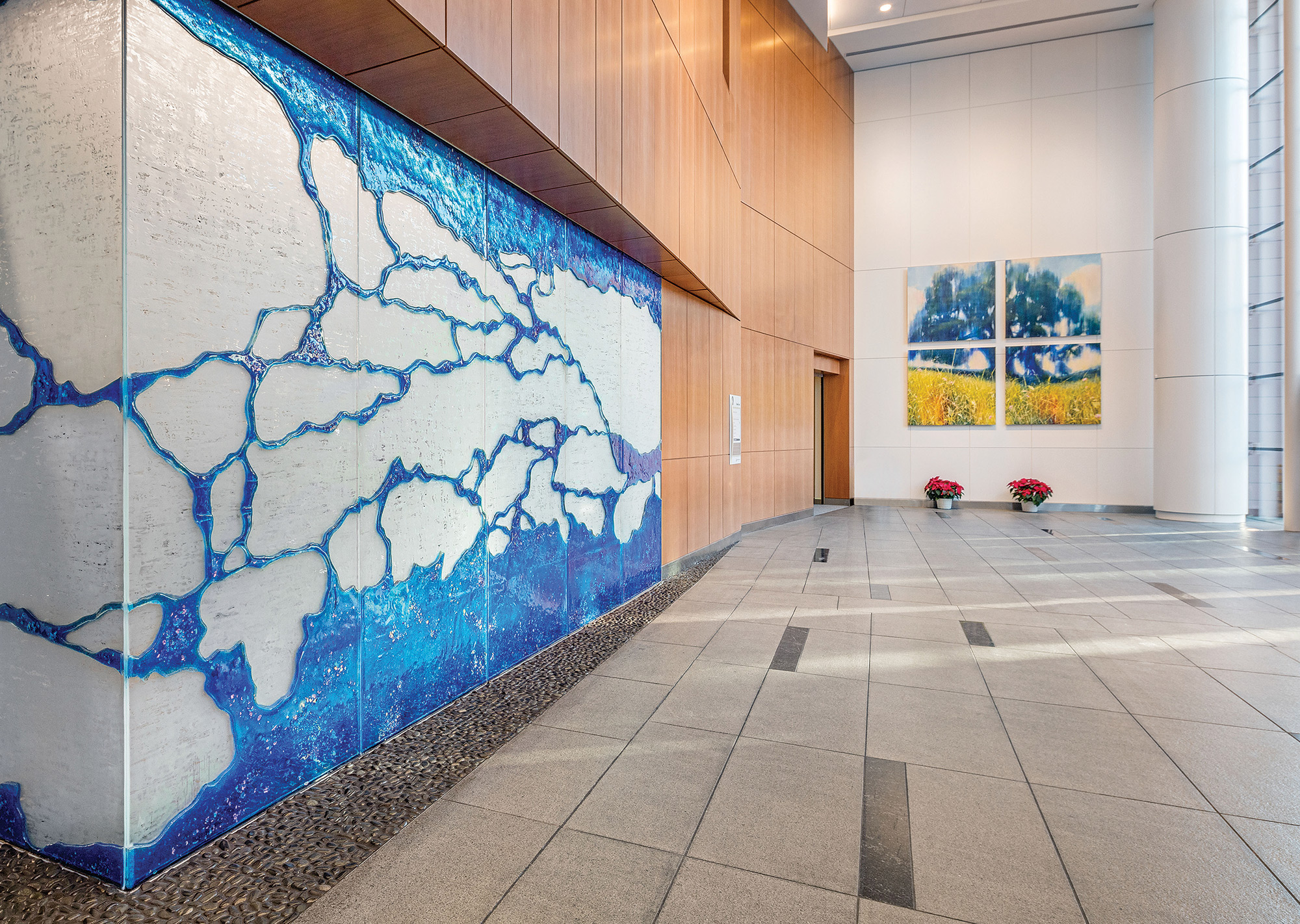 A glass-wall installation draws visitors and patients into a spiritual sanctuary at the Stamford Hospital Interfaith Chapel in Connecticut. The architectural installation was inspired by nature and its effect to soothe the mind and body. Photo: Carl Vernlund 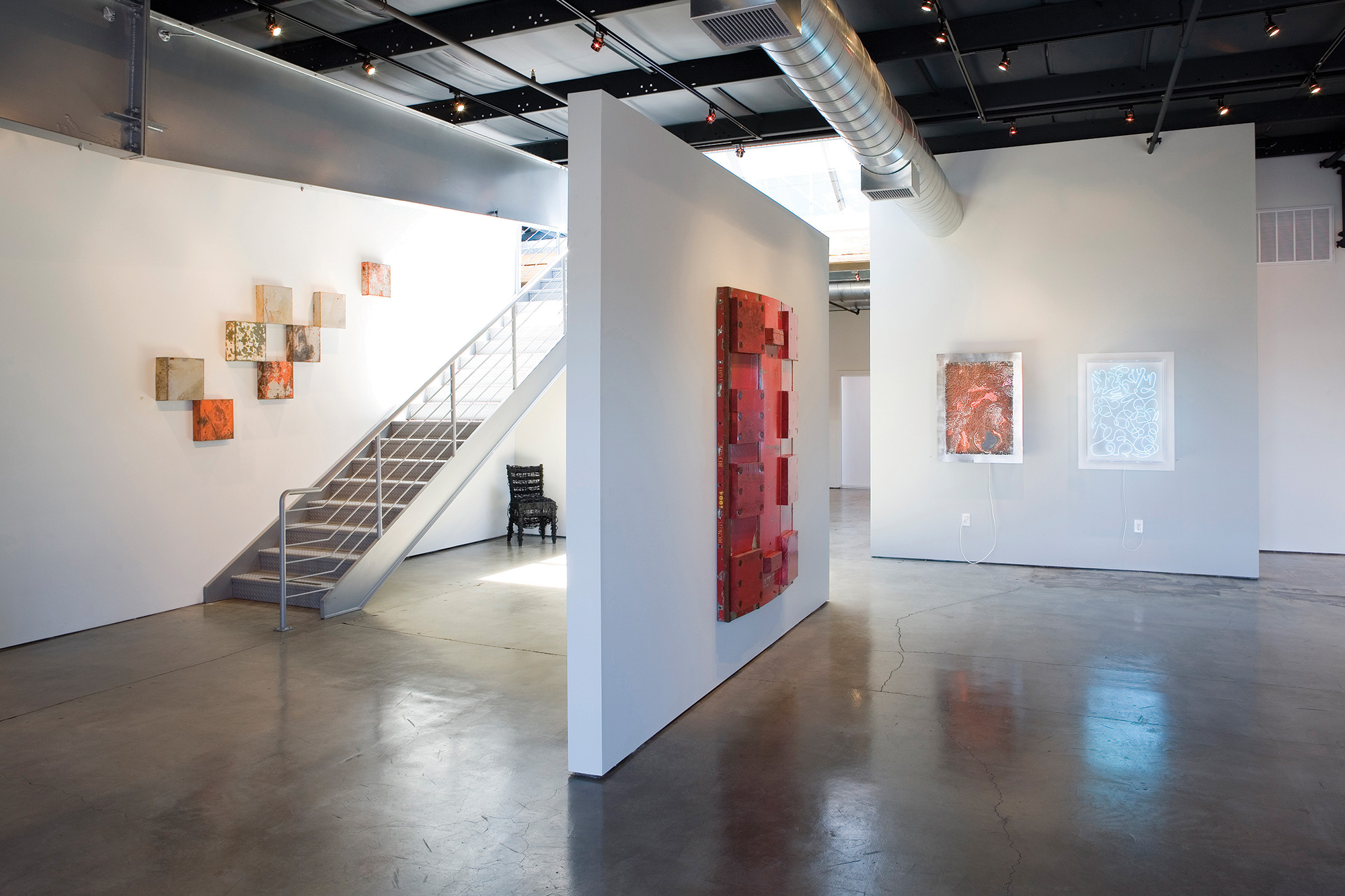 Huether’s studio displays his fine art projects in the gallery; a dynamic fabrication factory in the back is where the work takes place. 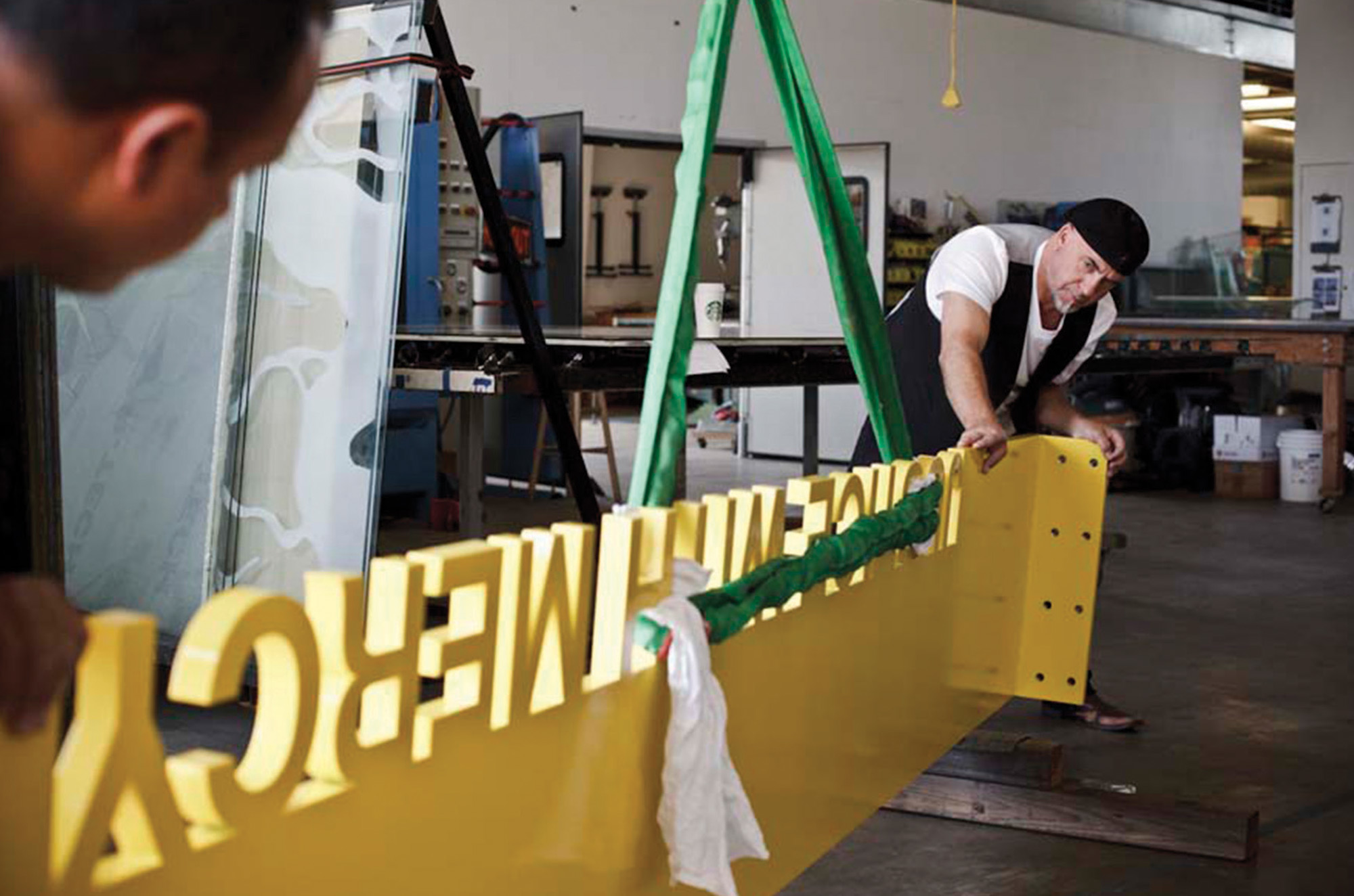 The artist often relies on recycled and weathered materials, including aluminum, steel, iron and whatever else fits the creative need. Photo: Ed Anderson 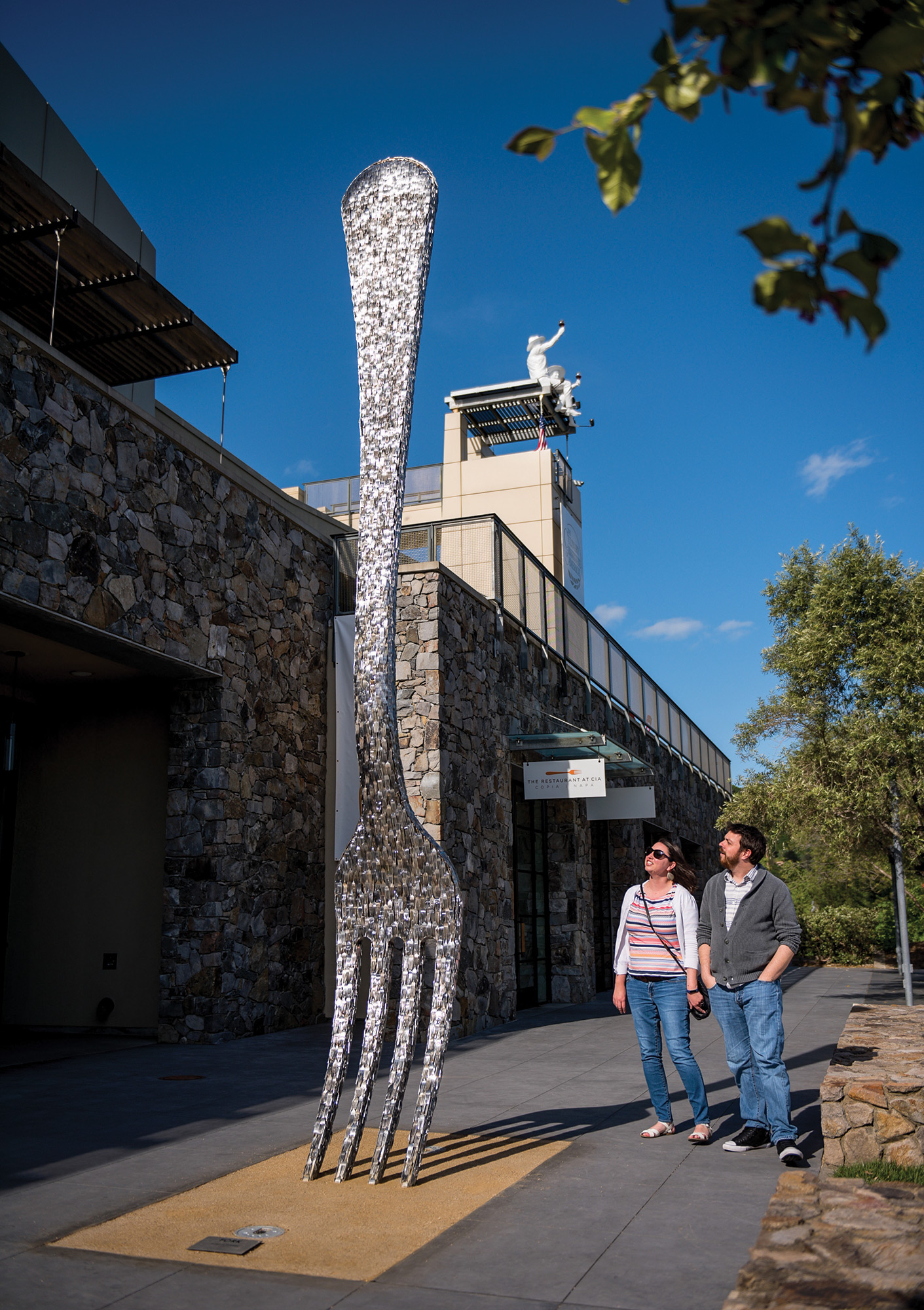 Located at the Culinary Institute of America, Fork was assembled from 8,468 recycled forks. Photo: Israel Valencia

Huether,s studio gleams as a jeweled warehouse in the darkness. Photo: Misha Bruk