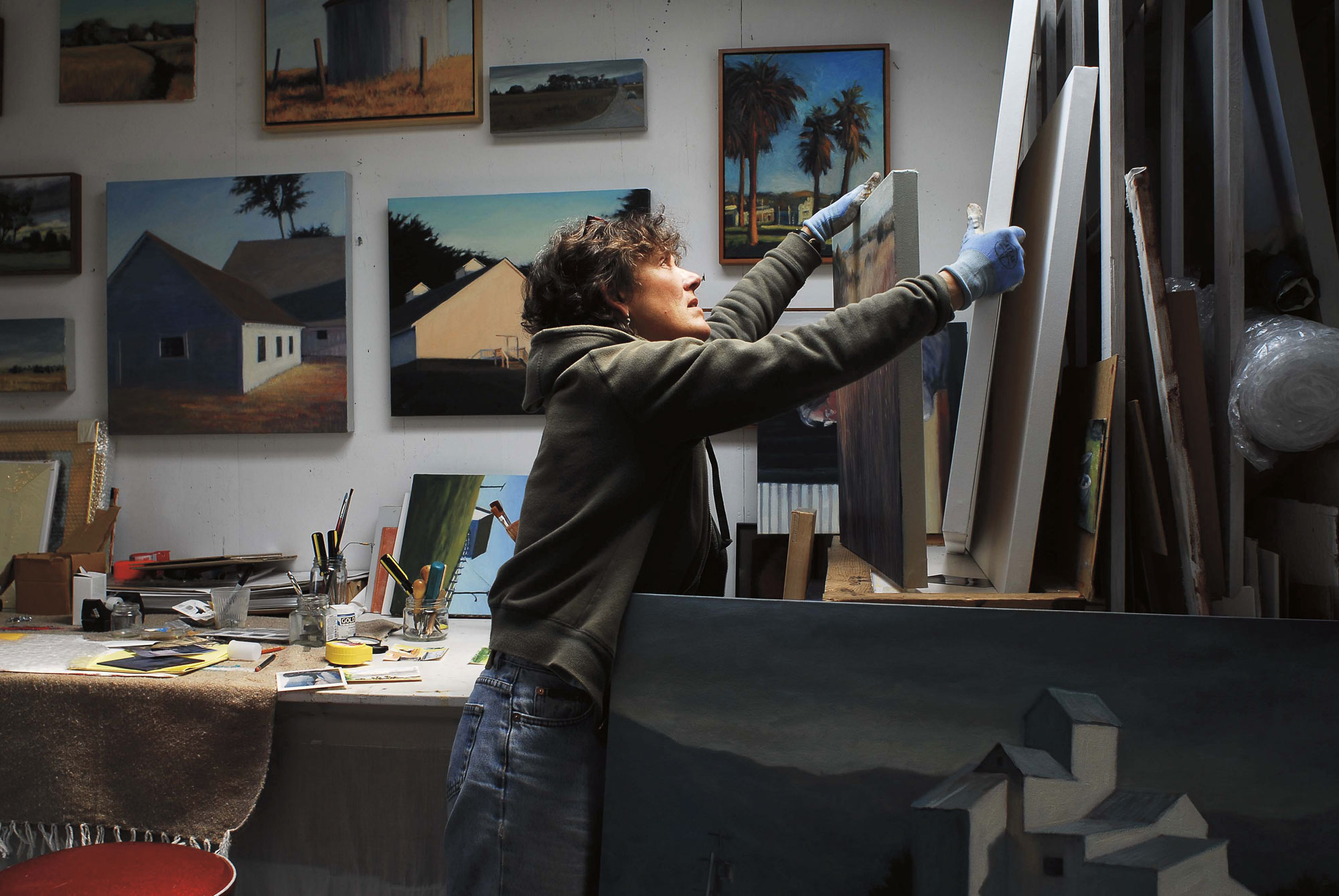 The artist in her studio illuminated by a skylight.

24 Jul In the Studio: Wendy Schwartz

On the edge of Tomales Bay, sandwiched between a road and tidal mudflats, Wendy Schwartz lives and paints. “I’ve always been attracted to little blips of nowhere, the patches of land that don’t really belong to anybody,” she reflects as she describes her childhood in suburban New Jersey and her attachment to what she calls “between” places. When Schwartz was a child she felt drawn to the fragments of land isolated within the built world, like the islands inside parkway cloverleaf exits. These jungles of chaos contrasted sharply with the ordered, tree-lined suburbia in which she lived, and the verdant wildness of these miniature landscapes struck the young artist as “little bits of real.”

In 1969, after attending art school at Boston University, Schwartz, whose lithe beauty and exuberance for life defies her 60 years, made a pilgrimage westward to California. There she found access to real agricultural and wild land, and there she stayed. “I love how big the West is and how little it makes me feel as a human,” she says. Her reverence for space is evident in her artwork; she paints moody landscapes of marginalized places. She admits, “I’m drawn to paintings where the land feels powerful.”

A visit to the place Schwartz and her journalist husband, Mark Dowie, call home reveals that for them living on the edge of a marsh is a deliberate choice to inhabit a little bit of real. “We’re tucked-in in a riparian area where there’s so much wildlife activity,” she explains. “It’s where the water meets the land.” On that edge between ecosystems Dowie and Schwartz renovated a cluster of four diminutive buildings, transforming one bunkhouse into a home, another into a vacation rental, a tool shed into a writing studio for Dowie, and an old garage into a painting studio for Schwartz. It was the construction of this studio in 1983 that inspired her to give up a lucrative career as a graphic artist and commit herself full-time to painting.

Step into Schwartz’s 18-by-20-foot studio and you enter a room of light. Sun shines down through two skylights, and on the eastern wall a picture window frames the undulating grass and mud of the Tomales Bay estuary, and beyond that the soft, rolling hills above the town of Point Reyes Station. These rich agricultural lands, dotted with dairy cows, are protected by the Marin Agricultural Land Trust (MALT), and are a source of continual delight for Schwartz and Dowie. So are the creatures that inhabit the marsh. “This time of year we hear red-winged black birds,” Schwartz says exuberantly. “Their song is evocative and nostalgic, for what I don’t know, but it’s haunting.”

Haunting and evocative are adjectives readily applied to Schwartz’s paintings. A friend once described her art as not particularly comforting. She took it as a compliment. She freely admits that she’s drawn to scenes vast and bleak. Yet her landscapes are free of hard edges, softened by her brush, and the result is a pervasive sensuality. The scenes she depicts also are distilled. “I can’t tell you how much I leave out,” she says. By removing detail and heightening certain elements, such as color and shape, Schwartz creates visually arresting paintings that are free of sentimentality yet still evoke powerful emotions — sometimes tranquility, sometimes loneliness, sometimes a slight sense of expectancy. Consequently, Schwartz’s work is often compared to that of one of her heroes, Edward Hopper. Like Hopper, Schwartz worked as a commercial artist for years, and like Hopper she is particularly obsessed with the play of bright sunlight and shadow on buildings.

This obsession sometimes gets the best of her. About a recent commission to paint one of the MALT-protected farms, she confesses that were it not necessary for her to accurately depict the historic barn she would change its color from red to white. “I just love how white interacts with whatever the landscape is around it, how it reflects light and accepts gorgeous shadows,” she says. White buildings serve as a kind of skeletal framework, Schwartz explains. White is also maximum light, and light is ultimately what seduces all painters. Schwartz is no different. She finds it hard to paint, to find inspiration, on flat days when there are no shadows.

When she’s not out in the sun exploring and sketching, Schwartz is in her studio. Its barebones design facilitates her creative process. She paints standing up and she hangs her canvases on the walls, which are made of plywood, so she can pound in nails wherever she likes. Every inch of wall space is covered in canvases ranging in size from 6-by-8 inches to 3-by-4 feet. Seen en masse, the subjects that capture her imagination vary wildly — Oregon back roads, an old truck in Taos, coastal forests. “What I like to paint,” she explains, “are not the main events, the postcards, but the sideshows.”

Wendy Schwartz paints and celebrates what others overlook, the simple but sublime lands of the West, from California to New Mexico and Montana. She avoids the romanticized and stereotypical naturalistic landscapes, the postcards, of traditional Western painting. Writer Michael Pollan, a dear friend of Schwartz and Dowie, went so far as to tell her, “You paint what is New England about California.”

Pollan is not the only prominent fan of her work. With an impressive resume that includes representation in the Artists Gallery at the San Francisco Museum of Modern Art, Schwartz has no shortage of collectors visiting her studio.

Living on a marsh has its risks; Schwartz’s studio has flooded three times in the past 25 years. This powerful and sometimes unpredictable place, where the water meets the land, is her home, her little bit of real. It is also precisely the kind of authentic place that she paints; in this way she inhabits her aesthetic. But she is by no means bound by it. “It’s not like I’m wedded to this landscape,” she states matter-of-factly. “I don’t know that if I lived in Manhattan I wouldn’t paint the landscape of rooftops.”

As a freelance writer and documentary filmmaker, Seonaid B. Campbell explores the relationship between man and the natural world and the way the two come together in art, film, and architecture. Her work has been published in Outside, AARP Magazine, Big Sky Journal, Flyfisher, and Montana Magazine, among others. 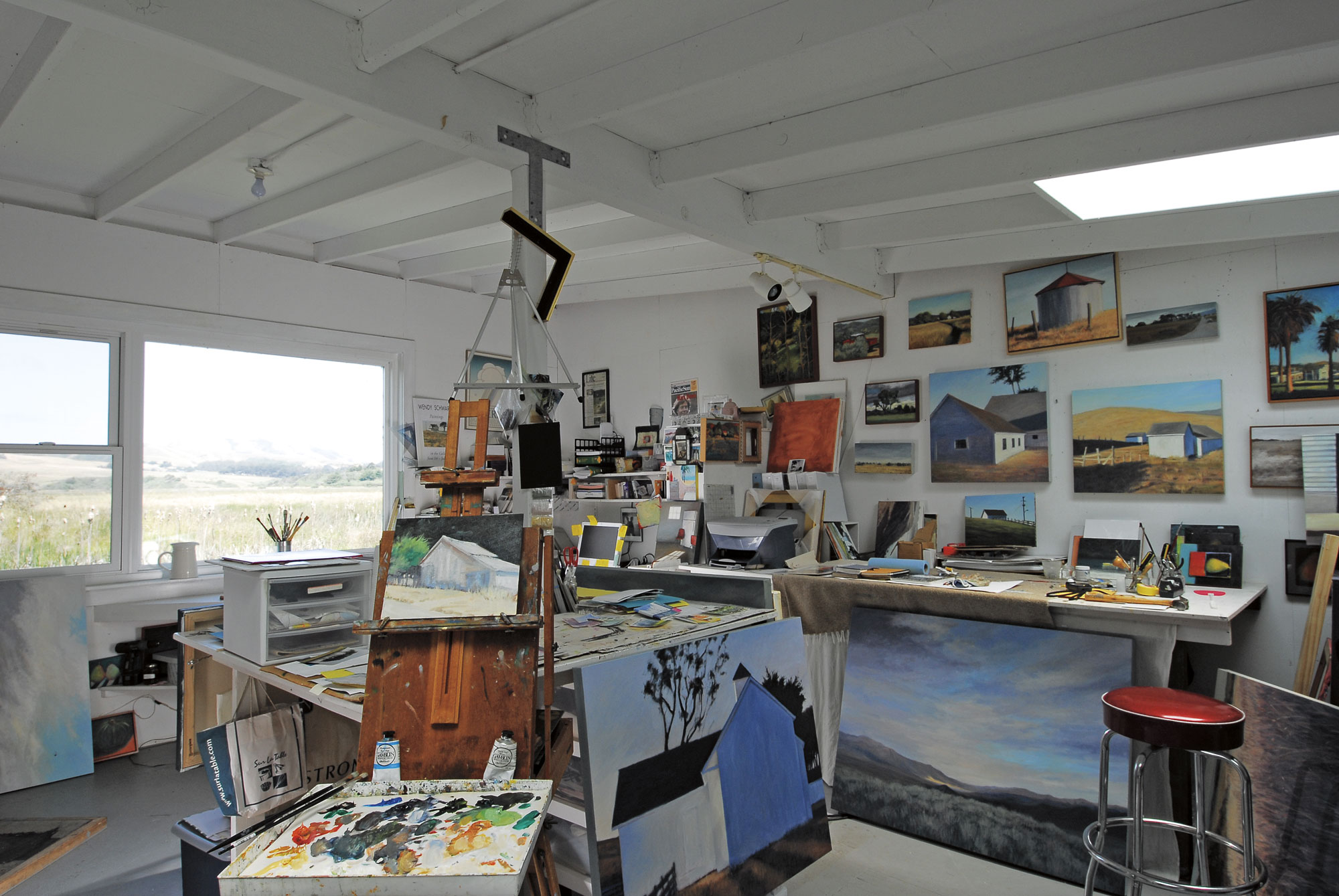 A room with a view: the studio’s picture window frames the marsh. 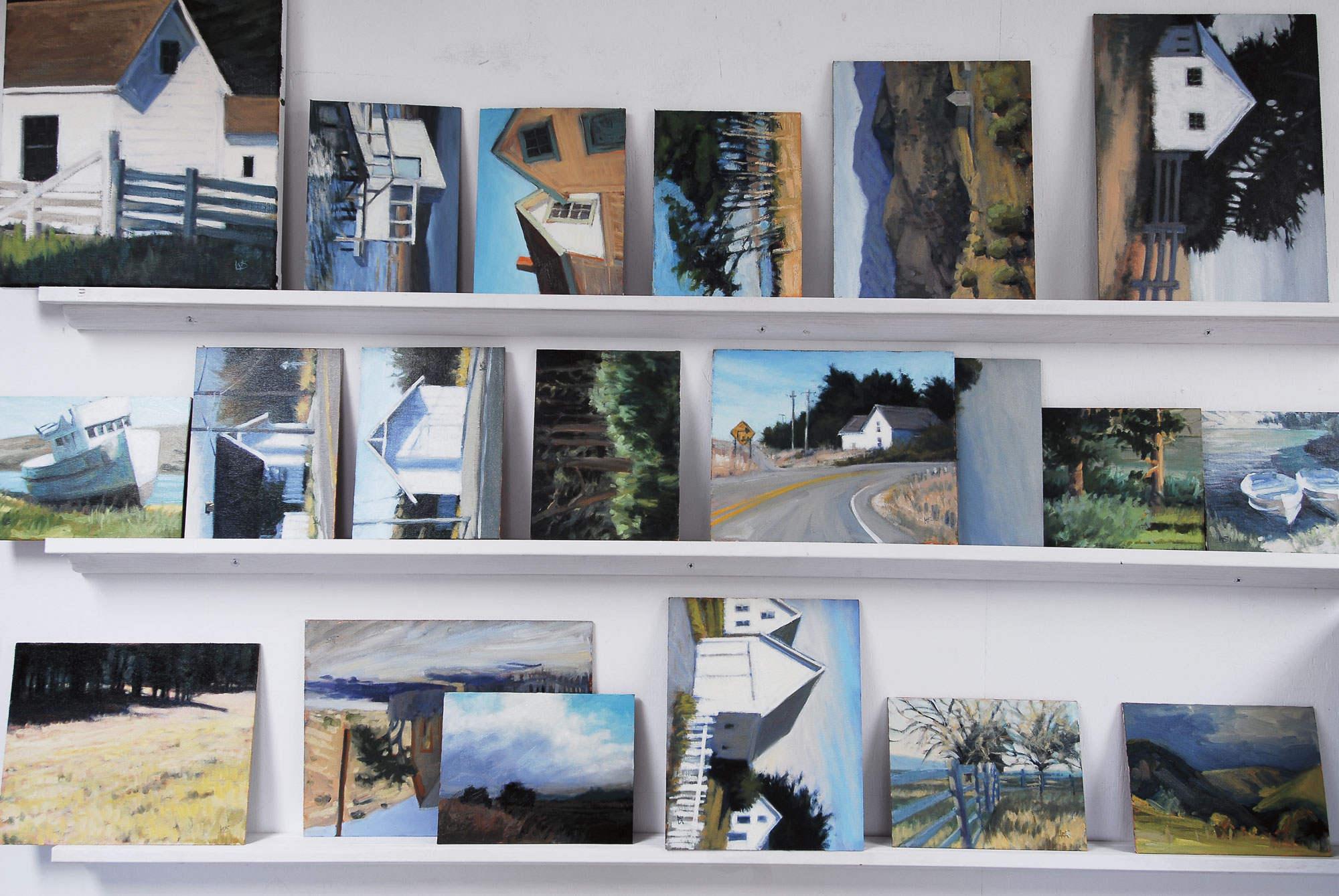 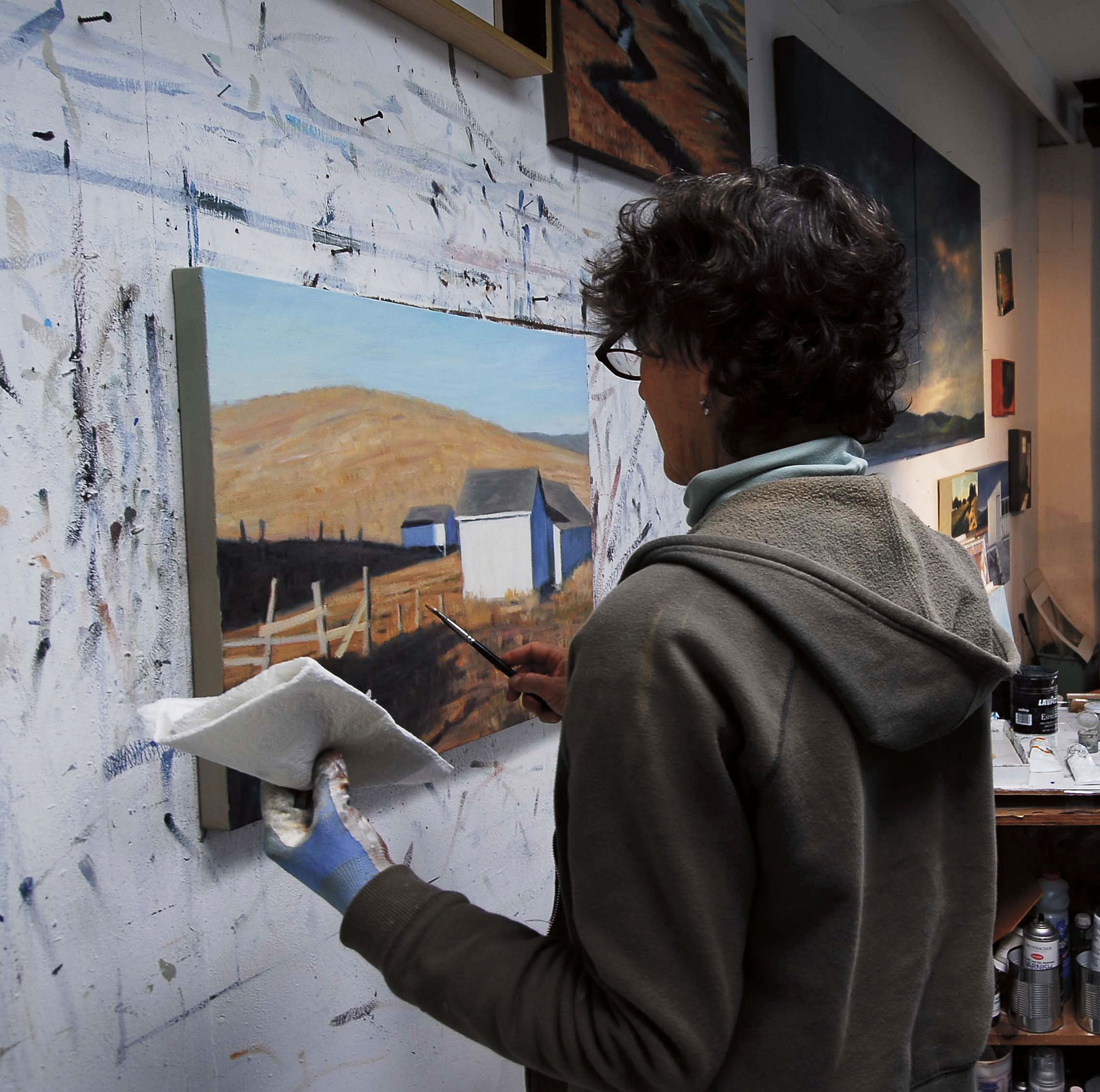 To economize space Schwartz paints canvases hung on the wall. 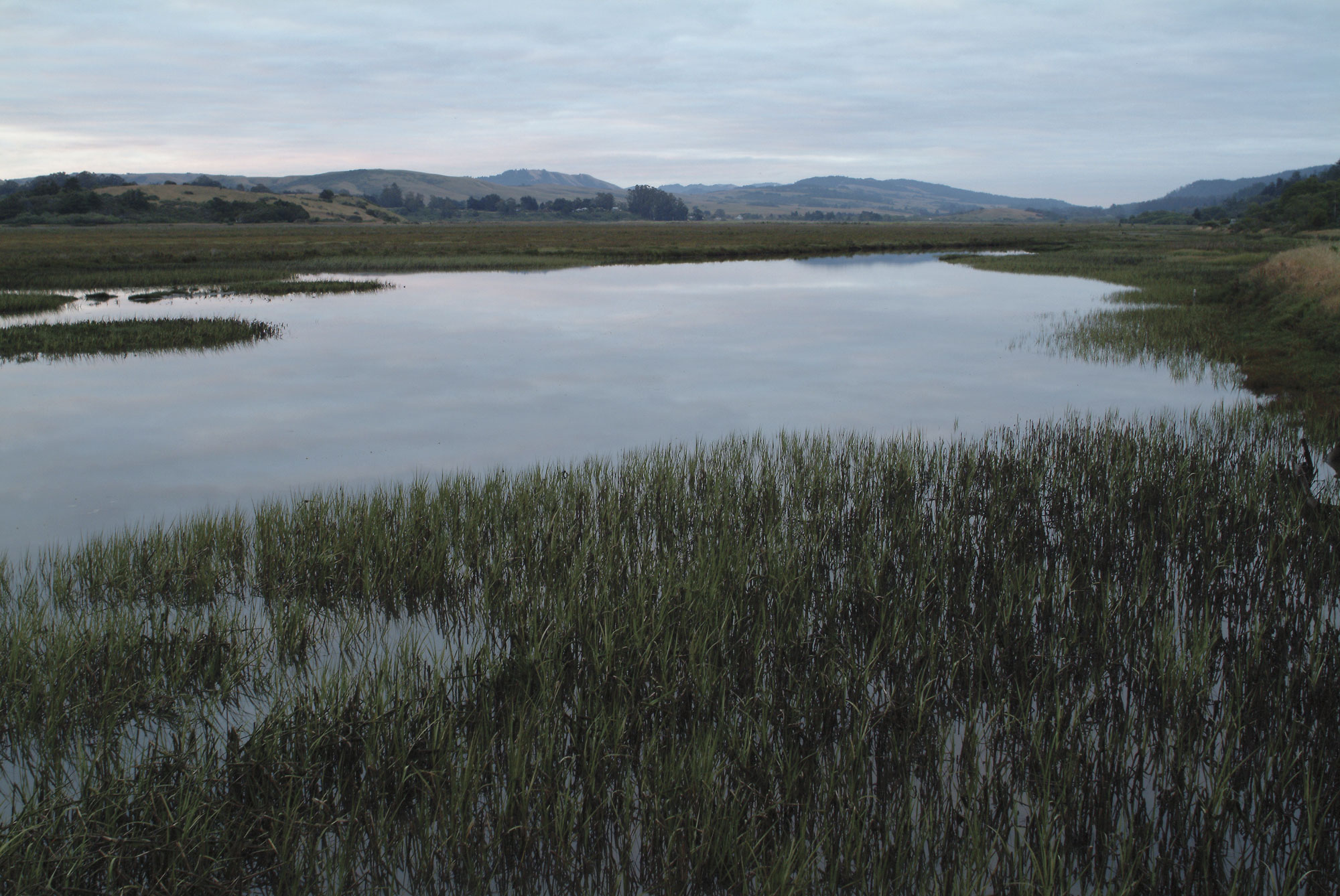 Sunrise over Tomales Bay and Point Reyes Station to the southeast. 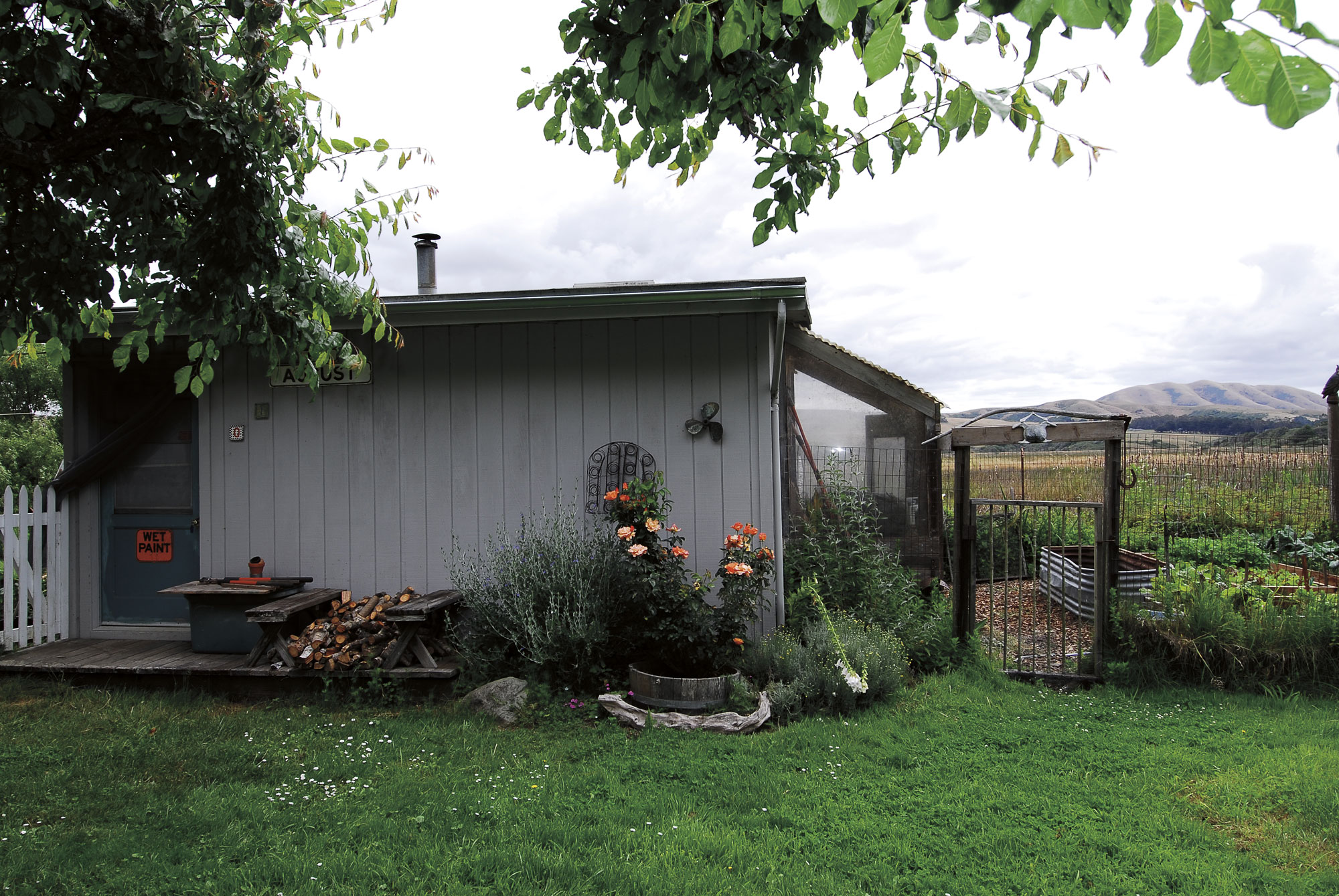 A “Wet Paint” sign on the studio door welcomes visitors 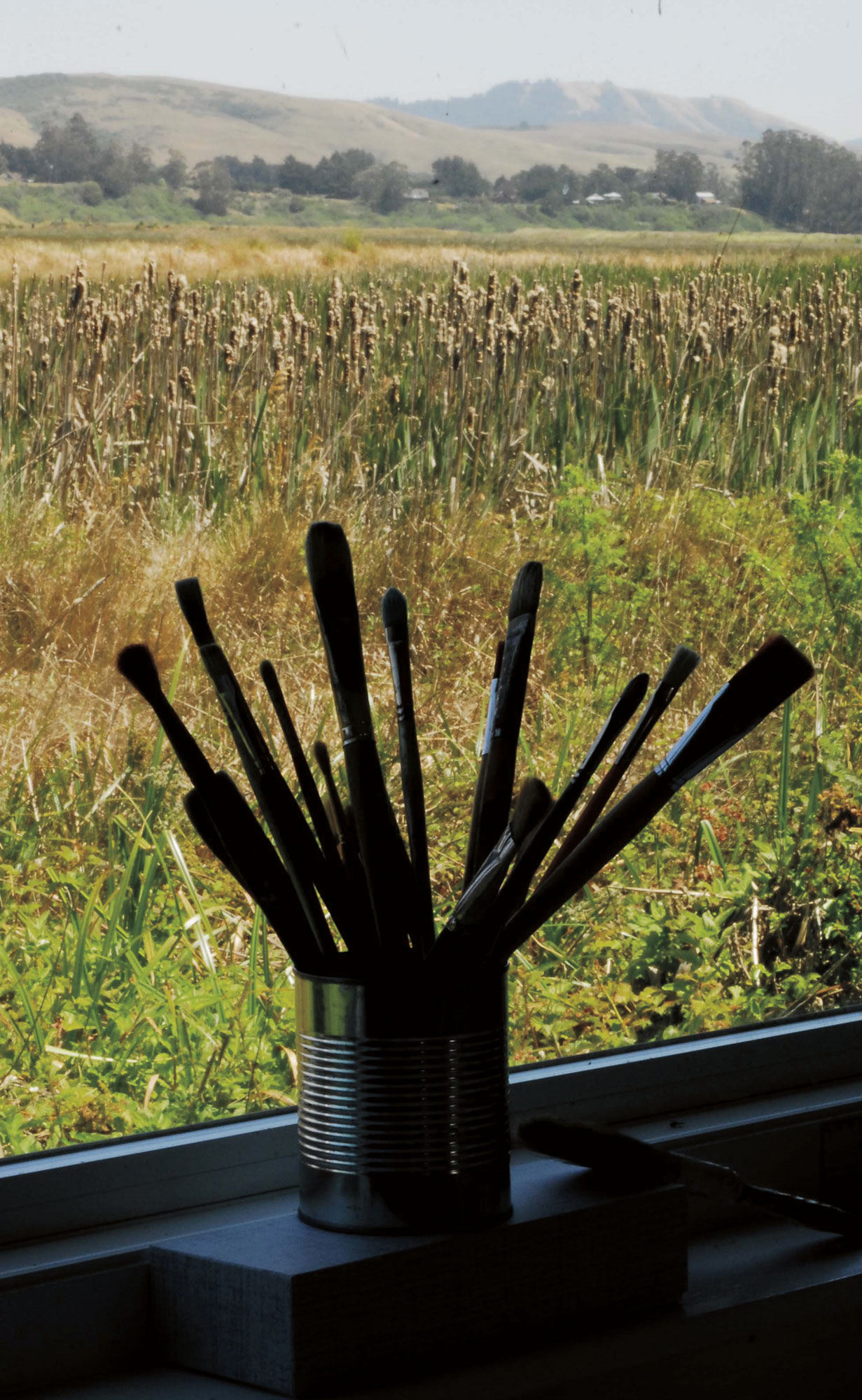 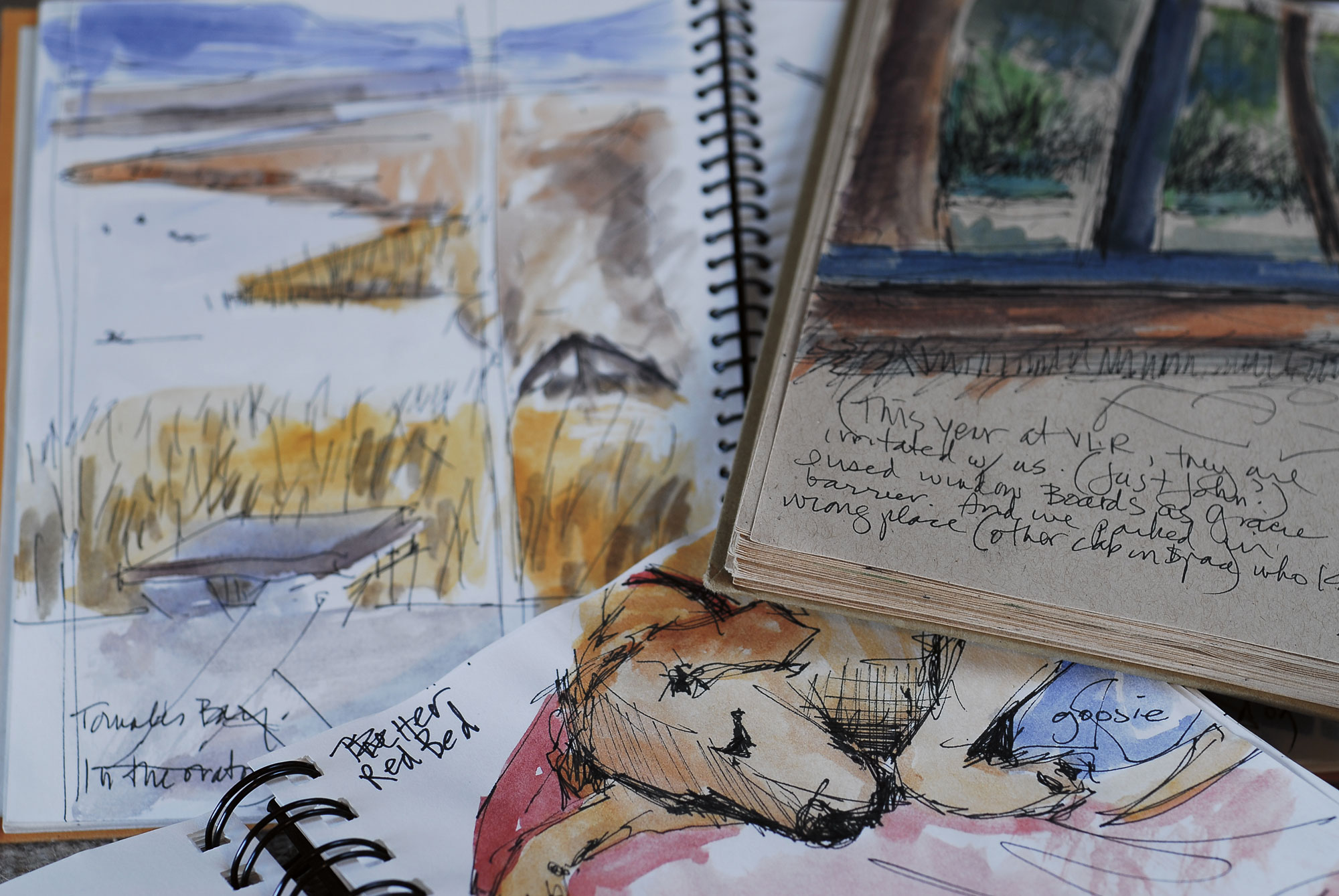 Sketchbooks reveal a portrait of the artist’s sleeping Labrador, Grace.