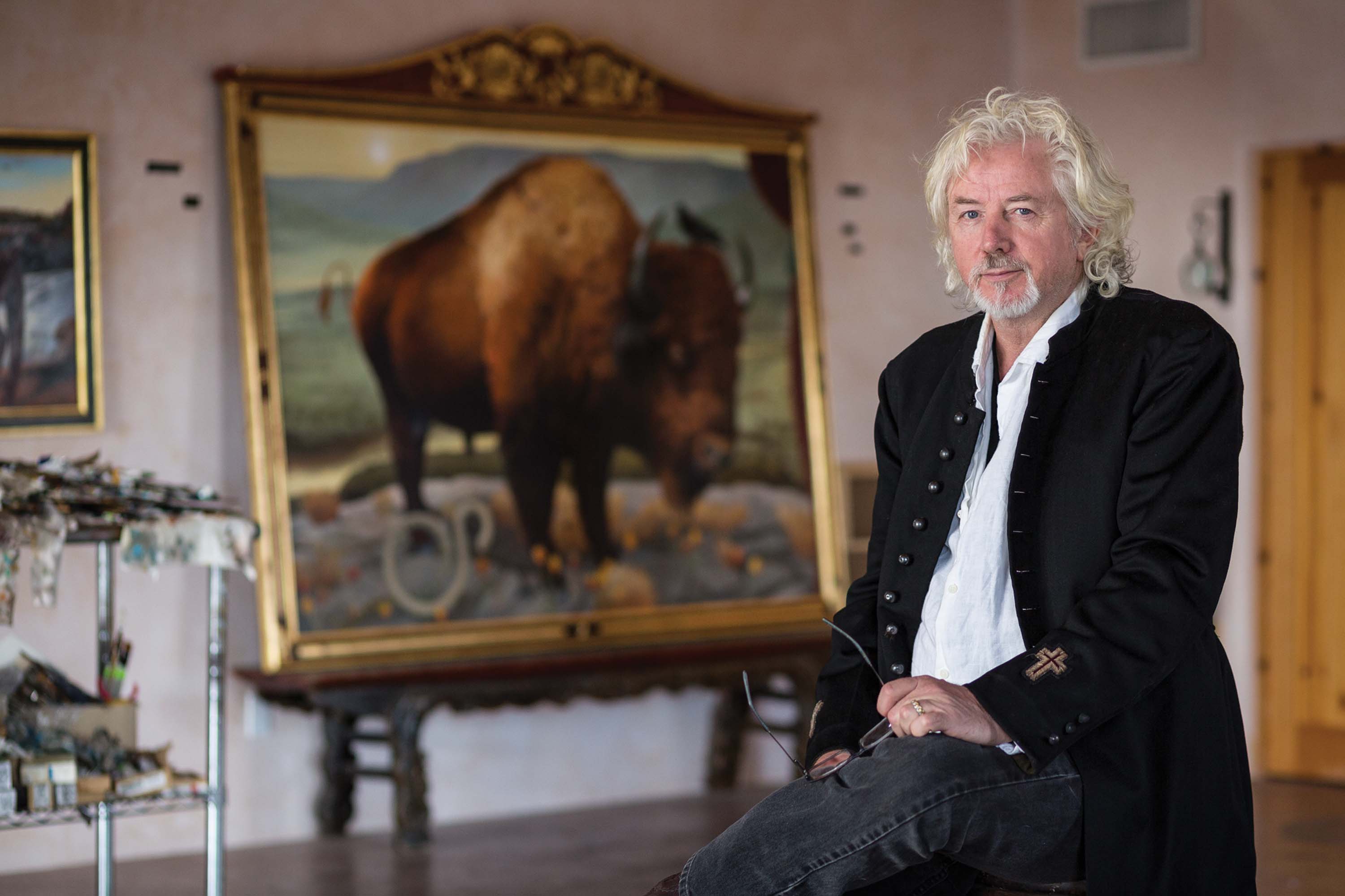 Michael Scott poses in his studio before the painting of an American bison titled "Abundance" from Buffalo Bulbs Wild West Show.

01 Feb In the Studio: Where Magic Happens

Michael Scott describes his studio as if it were a ship suspended upon the currents of an ever-changing sea. Standing on the back deck of the 1,900-square-foot architectural adobe, he sees the undulating desert landscape as water.

“I think of the studio as a boat about to launch into what was once a great inland sea,” says Scott. “I like the idea of water. It is always in motion the same way thoughts are in motion. I enjoy drifting with them in the studio.”

This tie to an alternate reality is not surprising to those familiar with Scott’s work. He sees the yin in the yang, the water in the desert, the human in the animal. His work is an amalgam of pop-art iconography, Americana and winsome characters that figure into a pantheon of fables that explore the humor of being human through parody.

When I bought this land it was primitive — no water, no utilities, no construction,” he says of the 25-acre parcel surrounded by seven mountain ranges and the great Galisteo Basin. “But the setting was so expansive and unfurling, it constantly recast itself with the change of light or season. I knew I had to make it happen, and I did.”

Scott and his wife, fabric artist Ellen Scott, moved into the studio about 12 years ago while construction was underway on the 4,300-square-foot main house and a second studio. The compound now also holds a handpainted teepee lit by an antique chandelier, a raised-bed organic garden and a bocce ball court.
pen, and I did.”

Each Rastra-constructed structure is flanked by a 25-foot- high, goldenhued weather vane laser cut in the shape of a trumpeting angel. “The weather vanes were influenced by summers spent painting in Maine,” he says. “You can find them on most of the barns there. I view them as trumpeting the creation going on inside.”

Scott’s two-story studio situated south of the main house is distinguished by a spruce trussed cathedral ceiling and a series of pendant windows that wrap around a 500-square-foot loft that functions as both bedroom and library.

“The scissor trusses were tricky to manufacture and the craftsman who built them said they were the most difficult he had ever made,” says Scott. “This had to do with the design of the roof line. My idea was to create a continuous line from the pitched roof to the basin below.”

The site-specific design creates a complex structural form grounded by walls paved with a peach-tinged plaster that further softens the capacious room and magically allows it to blend with the landscape outside the deck’s double doors. Alabaster sconces light the space and radiant-heat concrete floors have taken on pigment from throwaway drops of oil paint.

“We’ve had some great dinner parties here with the lights dimmed, candles lit and the food prepared in the entryway kitchen,” says Scott, an accomplished cook. “The space has also functioned well as a dance hall. I can tell you that.”

Spilling out from shelves located throughout the space are the props Scott collects that find their way into his canvases: cavalries of tin soldiers, toys from the 1940s and ’50s, miniature animal carvings and consumer packaging and advertising from the late 19th century.

“The props provide me with a lightheartedness that allows me to create parody,” Scott says.

In a place of honor on a library shelf, sits the El Bubble cigar box that inspired an internal conversation about the difference between value and worth that led to the acclaimed series of paintings, Farny Fables.

Perhaps the most stunning aspect of the studio is the 40-by-16-foot western wall. “I wanted my working wall to face west so there was no hot light on the paintings,” Scott explained. “A wall that scale is very demanding. If a painting can hold that wall, it will work in any environment.”

Currently covering the wall are selections from Scott’s latest series, The Doggie Diaries, which opened in New York in 2012 at the Gerald Peters Gallery. Based on the conceit that rescue dogs are as good as pedigree dogs and only considered inferior because of misguided perceptions, these canvases feature a romantic but motley crew of canine characters portrayed as drunken sailors, jazz musicians, pirates, starlets and assorted outlaws.

All of this adds up to a magical combination of form, function and style — a place where vintage props and a high-desert landscape transform technically adroit paintings into artworks of wonderment.

“Magic is what I try to create in life,” Scott says. “There is the magic in the paintings and the enchantment created by a studio filled with outrageous props that forge a simultaneous sense of the present and past. Life in my studio is a kind of magic realism where dogs can sing opera and buffalos can act.” 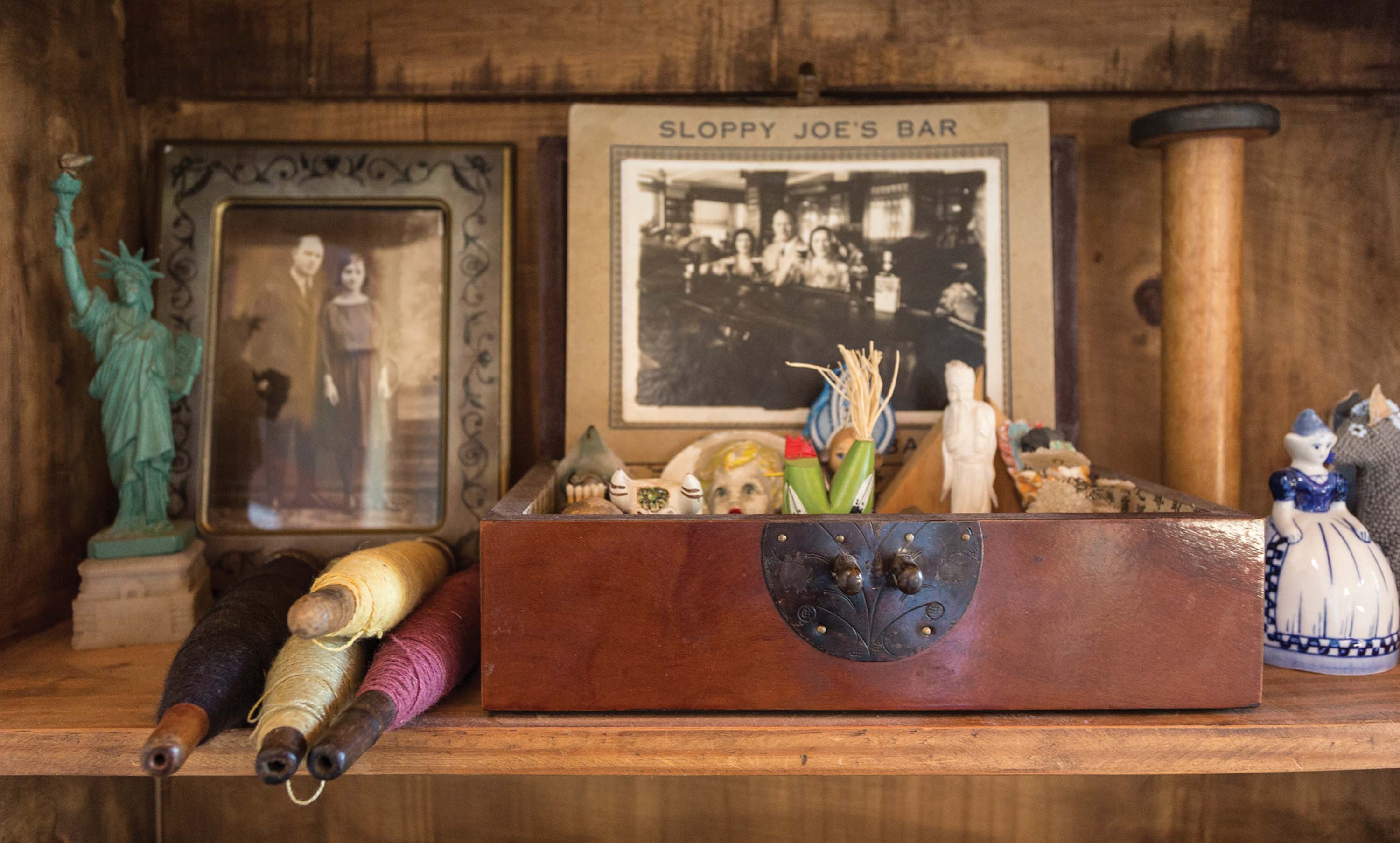 Family portraits, yarn and memorabilia are on display. 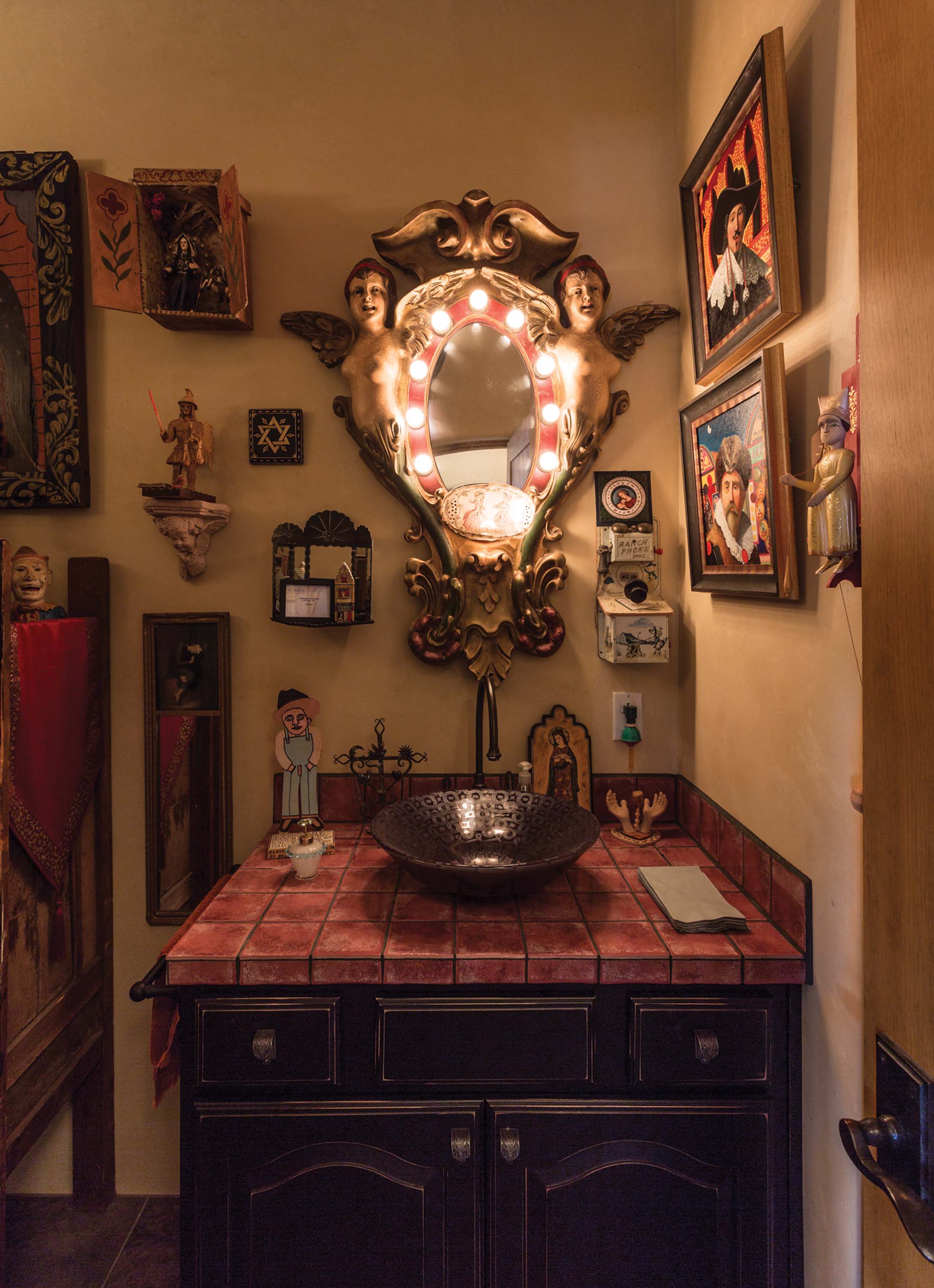 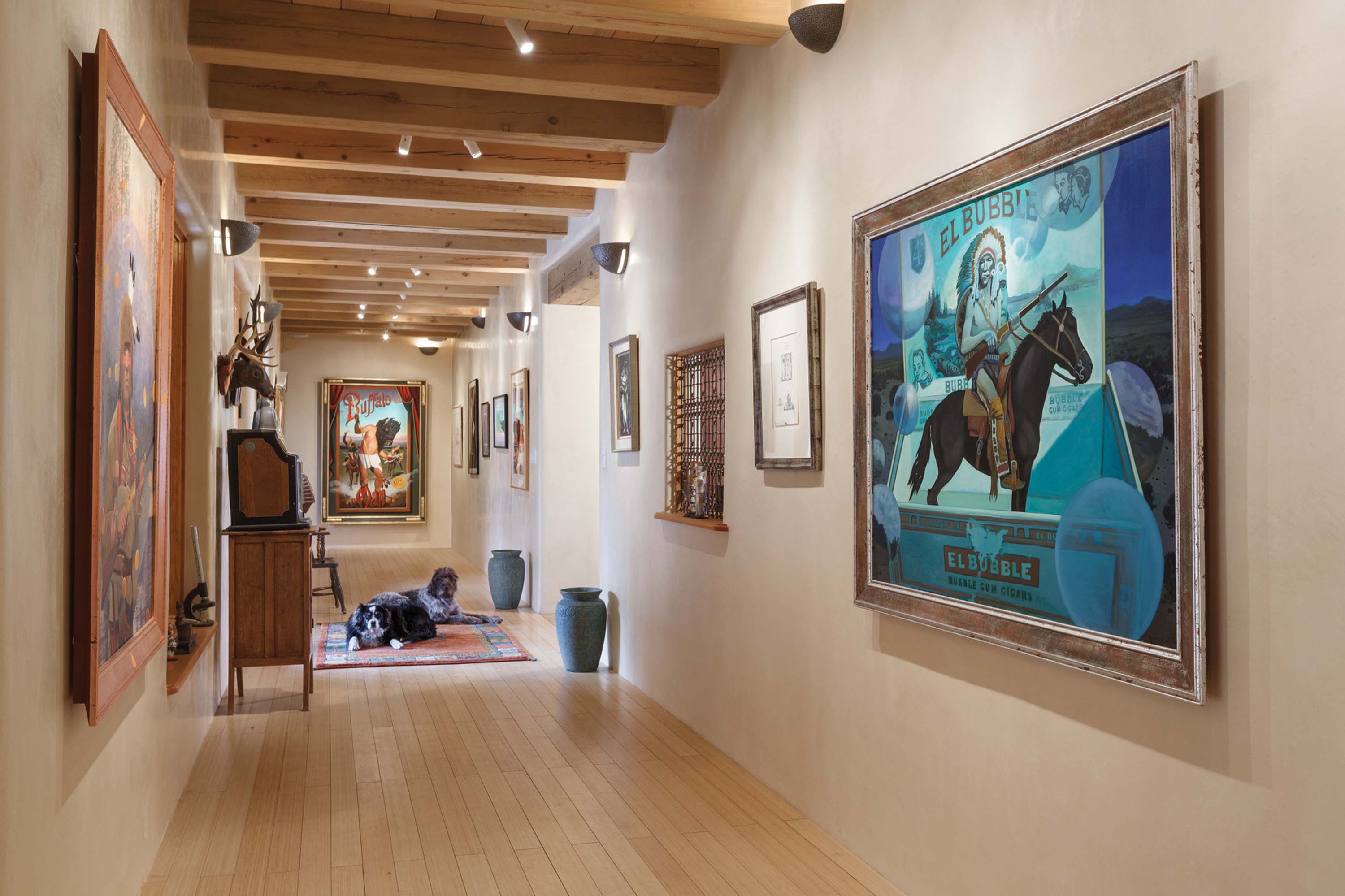 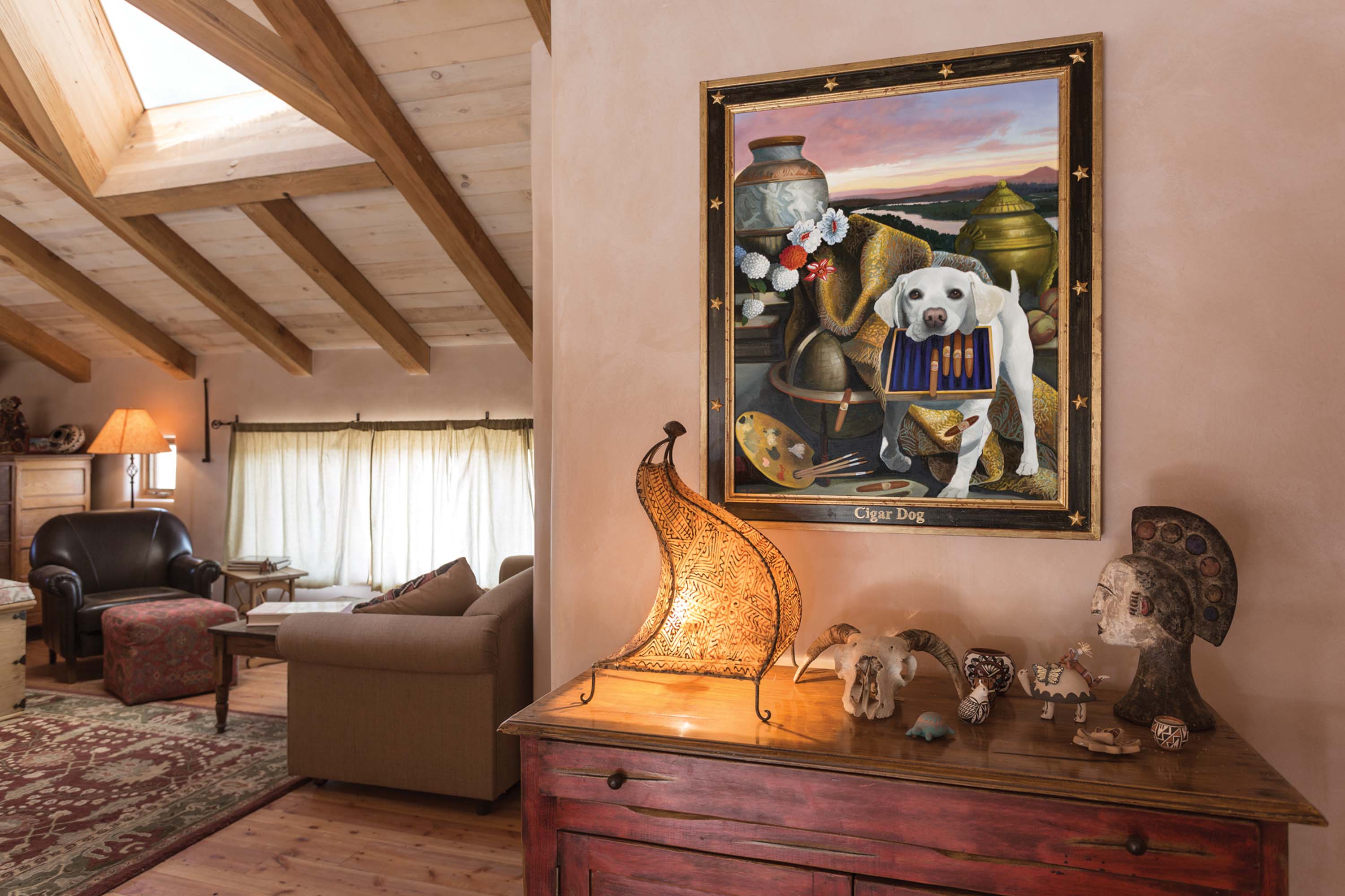 A pyramid skylight illuminates the studio’s bedroom loft. Scott’s painting, “Jose the Cigar Dog,” is from his current series, “The Doggie Diaries.” 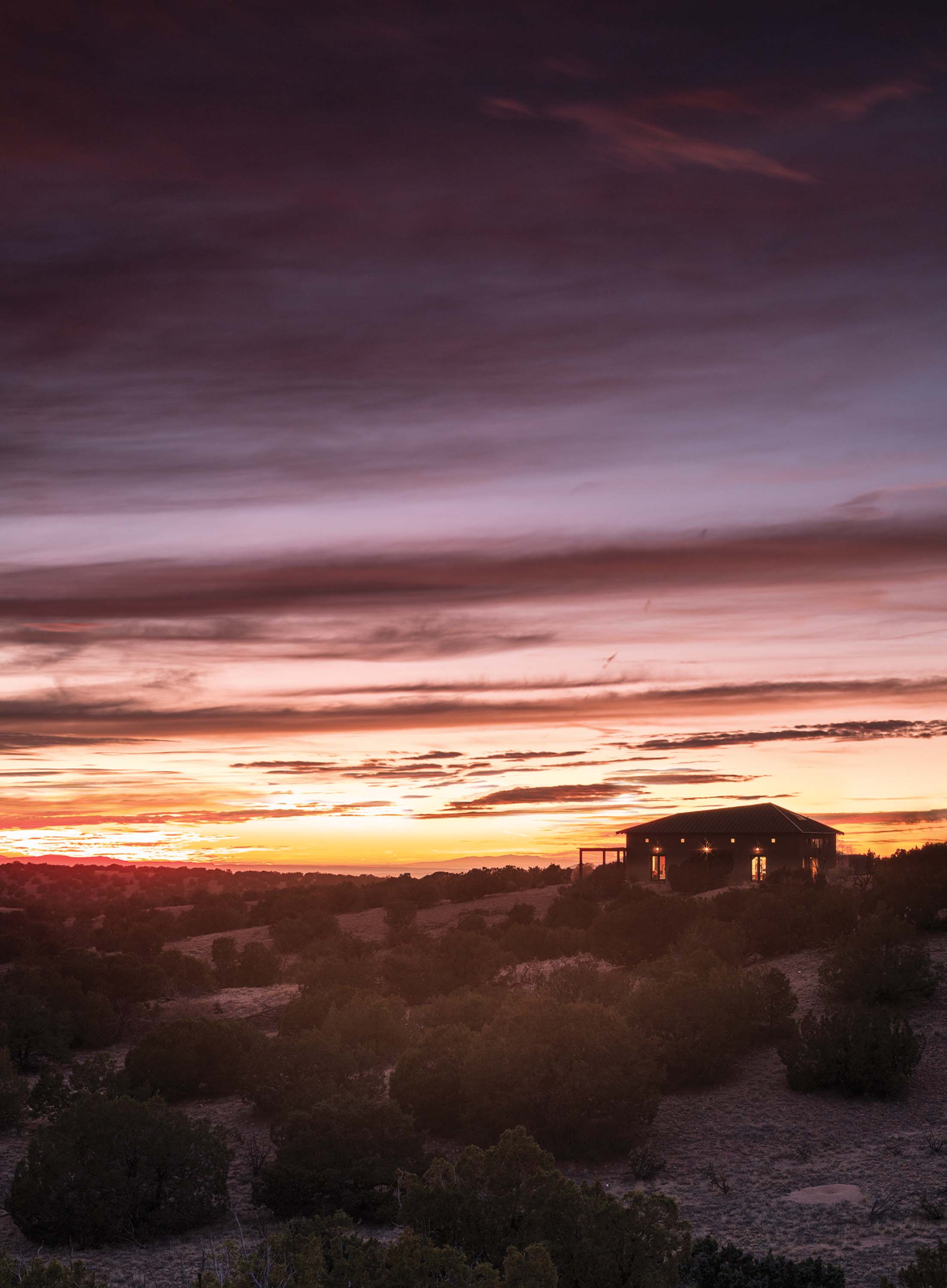 Scott created a parallel relationship between the studio’s roofline and the landscape seen here at dusk. 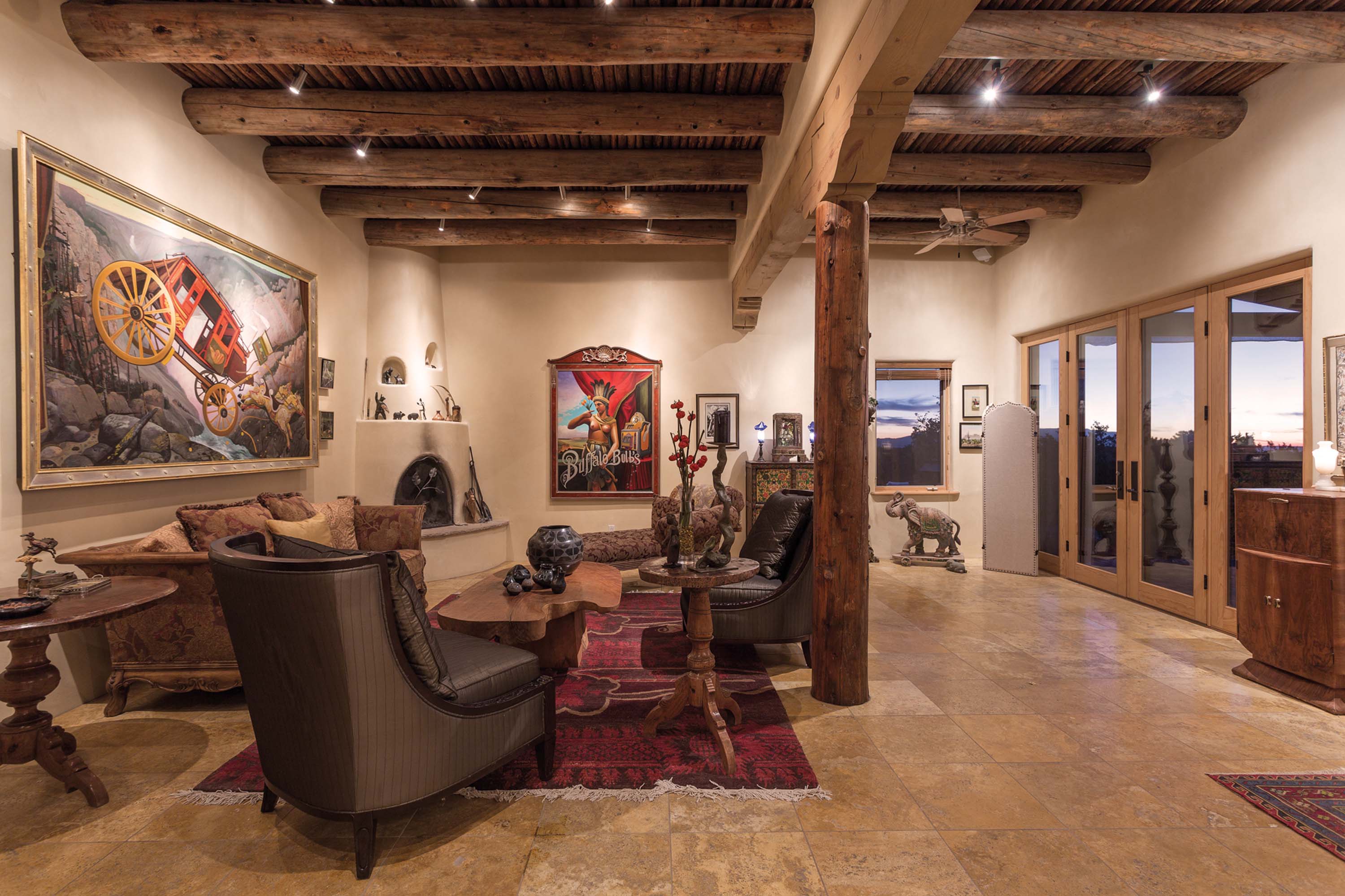 The main house features viga and latilla ceilings created from chestnut-colored timber Scott secured after a forest fire in the Pecos wilderness. 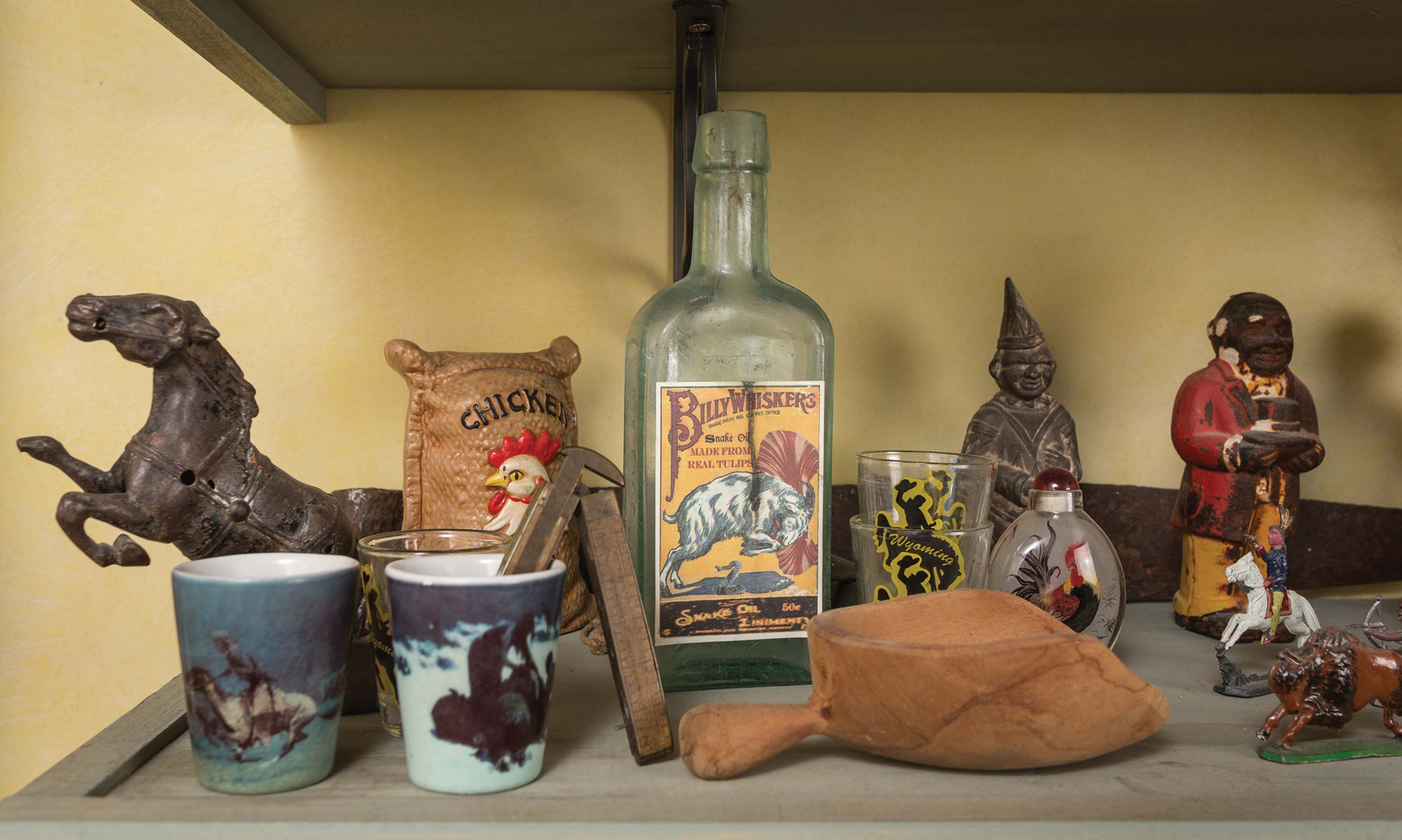 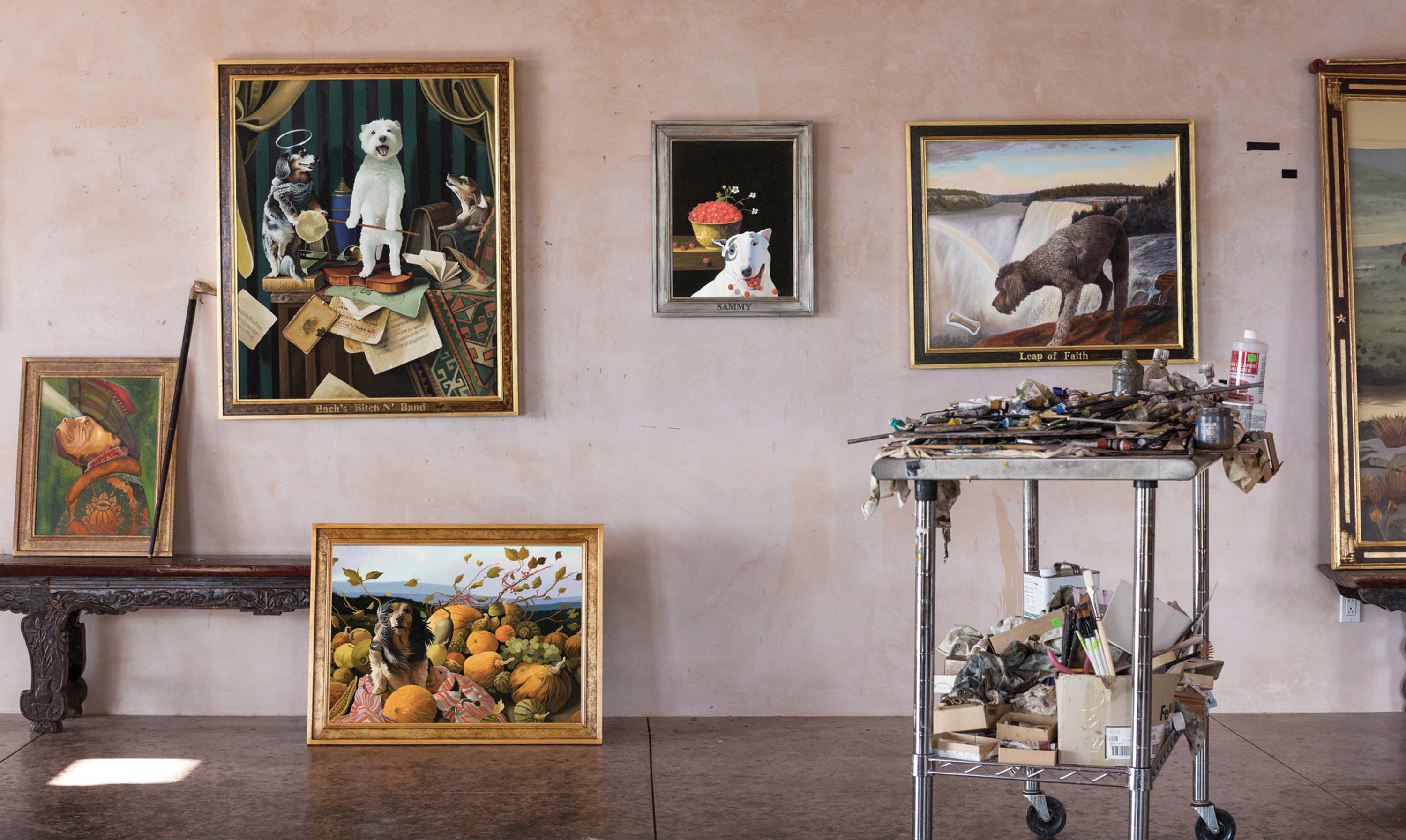 Scott often works on multiple paintings at the same time. Seen here are selections from “The Doggie Diaries.” 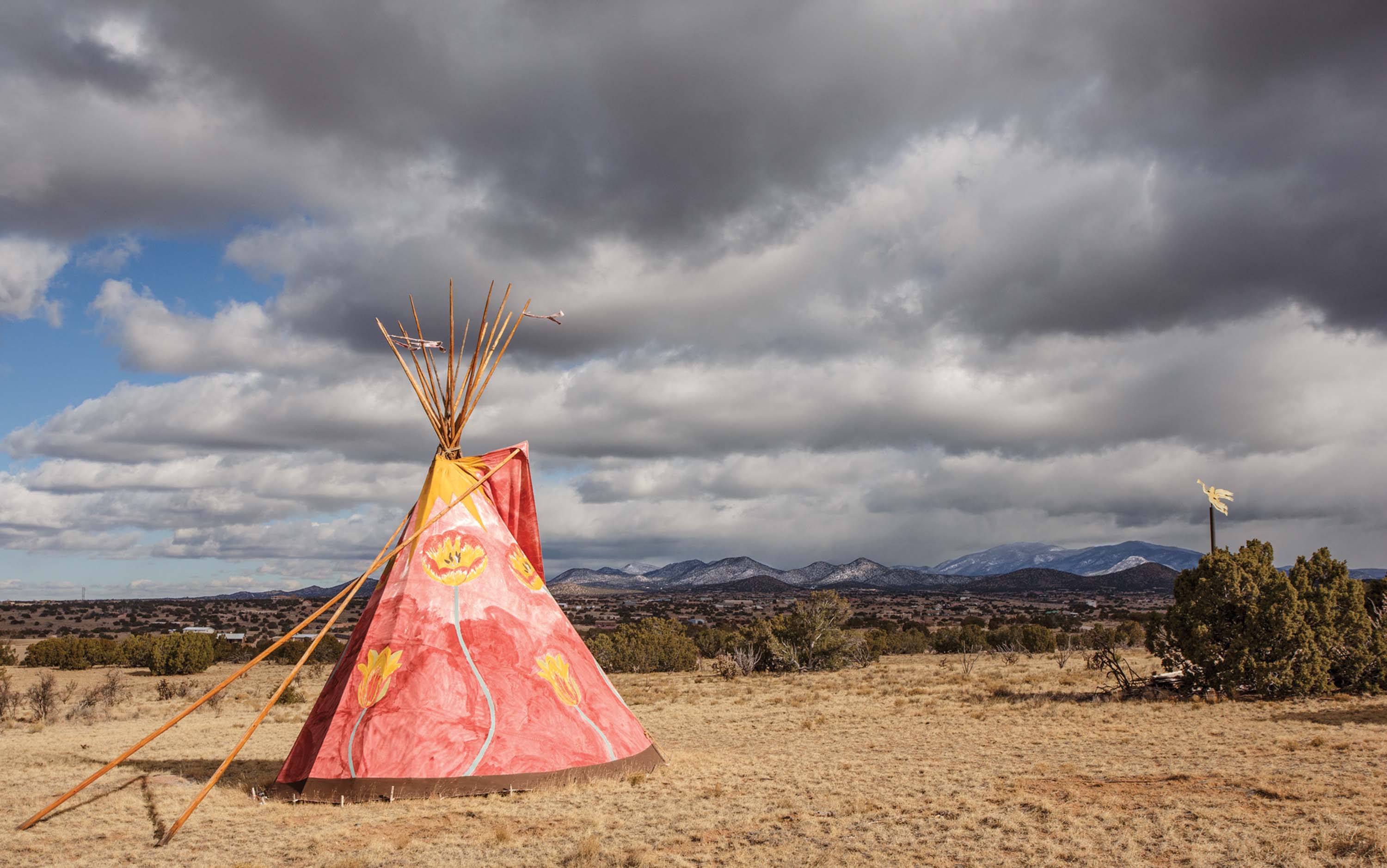 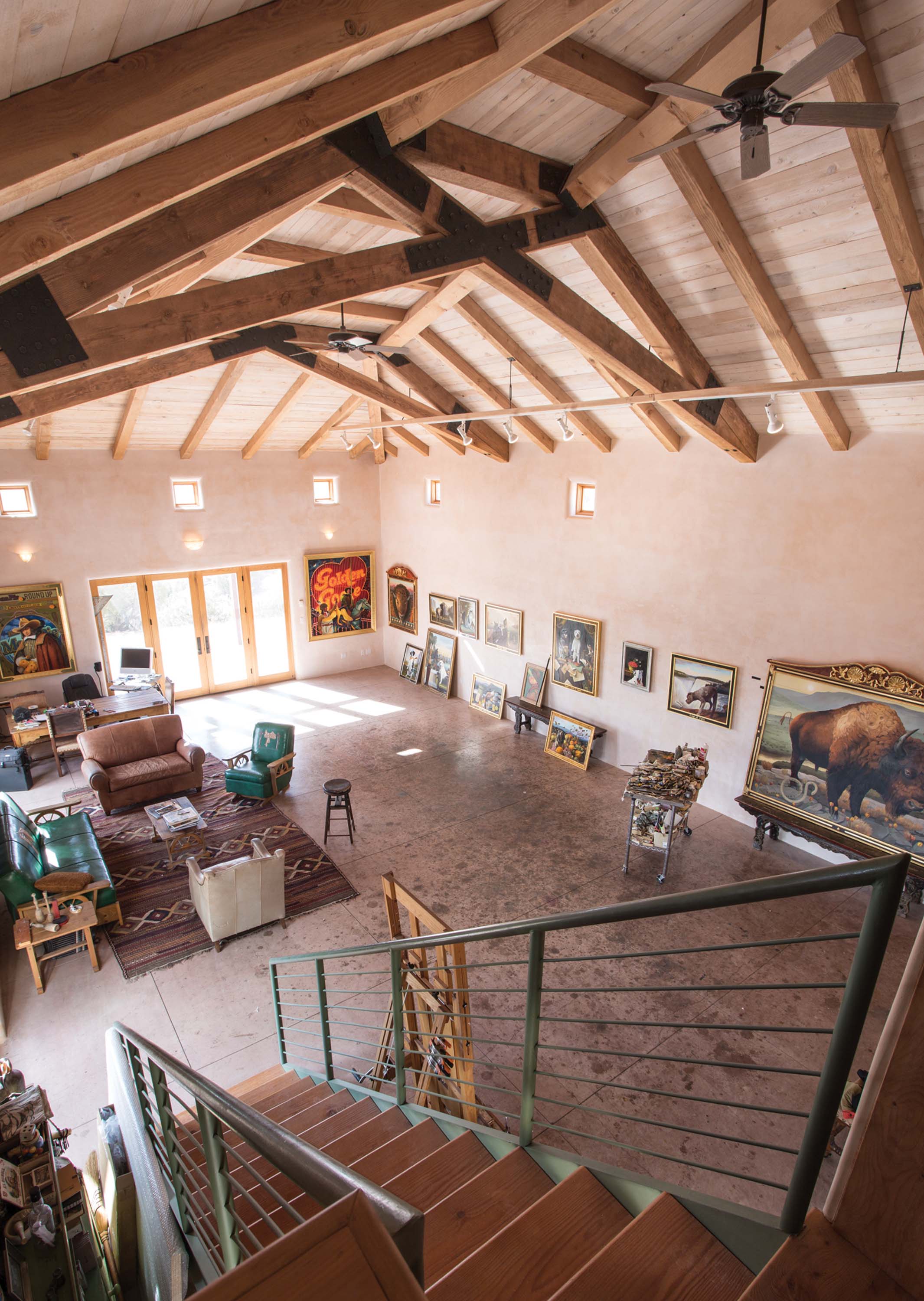 The sight line from the studio loft extends along the 16-by- 40-foot working wall to the French doors that lead to an overlook of the Galisteo Basin.