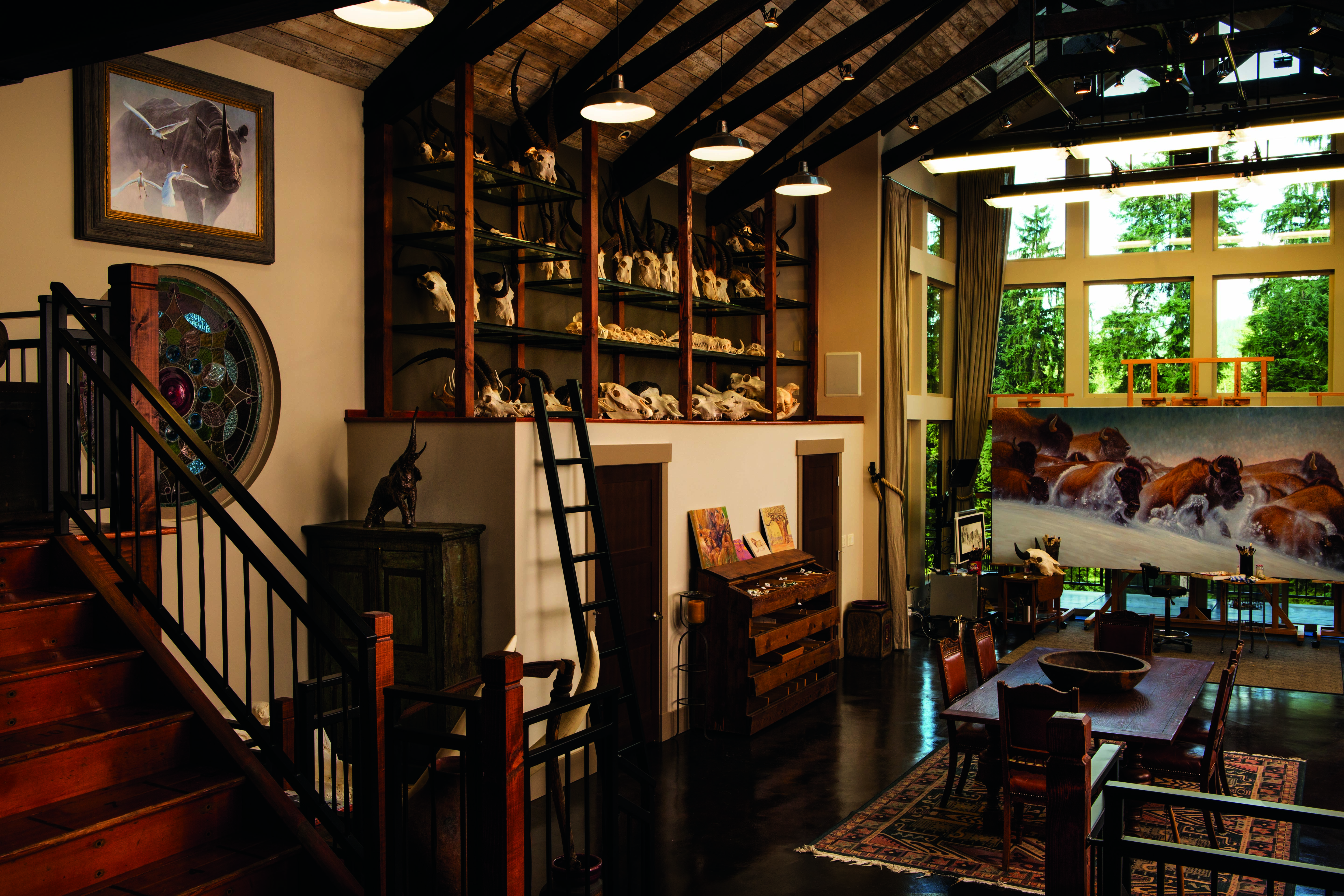 The collection of animal skulls forms a reference library; Banovich says studying the skulls helps him “understand the architecture underlying the skin and muscle.”

01 Dec In the Studio: John Banovich

John Banovich is a man of fierce determination and tight discipline and thus knew precisely what qualities he wanted for his new studio. A remote, isolated, forested setting with many bears for neighbors. Good road access for shuttling big canvases and welcoming up to 100 people for workshops and fundraisers. A refuge so intimate and personal that he could nurture his “true self” in it. A room so cavernous he could back 50 feet away to study a big painting in progress. The feeling of a barn. The feeling of a womb. The feeling of a lair, a home base for a world-roaming adventurer. Banovich wanted the impossible, a farrago of contradictions.

Incredibly, he seems to have gotten it all. “I can say after working in here for … let’s see, four weeks now, that every decision was the right one.”

Banovich is an internationally acclaimed wildlife artist whose favored subject is the megafauna of Africa, with occasional diversions to the wolves and grizzlies of North America. He’s spent most of his life in Montana, but when his wife, Amy, made partner at a global accounting firm with offices in Seattle, they decided to move within commuting distance of the city. When they stumbled across this site backed up to a 90,000-acre forest preserve, Banovich knew instantly: This was the place. There was an existing house and a clearing that could accept a big studio — 3,500 square feet — with minimal destruction. Banovich is a man of out-size ambitions, but he’s still a conservationist. “I don’t like to cut down one tree if I don’t have to.”

Seattle architect Jerome Diepenbrock designed the studio — or perhaps more accurately, translated Banovich’s unusually precise dictates into working drawings for the contractor. “John had a very good, thorough vision of what he wanted,” Diepenbrock says. “The feeling of an old barn, but still very light inside. The feeling of it is very definitely John’s. He finished it out the way he wanted it, and I think he did it very well.”

To understand the building requires an understanding of how Banovich works. First, he’s not just a solitary artist; he’s a company selling paintings and giclée prints through a virtual gallery. He also heads a nonprofit conservation enterprise, the Banovich Wildscapes Foundation, which means that occasionally the studio has to convert to a big party space for courting donors. Downstairs is a full-time assistant’s office, a drying room, framing room and storage. Upstairs is a loft that serves Banovich as an office, plus a bathroom with shower and a slender naproom with cot. The main floor is that barnlike space, 30 by 60 feet with a ceiling peaked at 35 feet. It teems with artifacts — rustic antique furniture, a vast collection of exotic animal skulls from piranha to elephant, a collection of Banovich’s own prints. The vertical-grain fir for the stairs and loft floor came from demolished high-school bleachers in Livingston, Montana, and it carries the DNA of the place, literally: The painted seat numbers are still there, as are gum wads stuck to the bottoms of the planks.

“If Hemingway had been a painter, I wanted the studio he would have had,” Banovich explains. “The timeless look, heavy, hard, strong, rich, some dark surfaces — just a space that makes you feel really, really good. Bringing things from your travels around the world that influence you.

“Every time I look at this elephant skull, I see thousands of elephants migrating. Not only does it make me remember the experience of seeing them firsthand; it also inspires me to honor and pay great respect to them.

“The feel-good aspects of the space — it’s not measurable or conscious, but it’s there in the unconscious. And the unconscious is the difference between making a painting that’s pretty good or one that’s really good. The environment is what pushes you through to the next level.”

The painting end of the studio faces east through a full wall of windows — plus skylights overhead and still more glass on the flanks. Banovich likes to face morning light because his most productive time is before noon. He can draw drapes over the east windows to avoid backlighting his canvas, or if he needs intense daylight to parse the tonal values in a dark composition, turn the piece around. Normally he doesn’t want daylight striking his canvas at less than 45 degrees off the perpendicular; it would produce a distracting sheen. Overhead is a smorgasbord of artificial lights: color-corrected fluorescent, sodium and halogen so he can see how a painting is reacting to different spectra. Flanking the canvas on the left is a large computer screen for photographic images of his subjects; to the right an easel for concept sketches. And in a nearby closet, a sound system. “When I’m painting African subjects, I like to listen to African sounds.”

All this might look like a luxurious eruption of clutter in the hands of many artists, but not Banovich’s. He’s organized, methodical and disciplined, and everything in his studio as well as his work habits reflects it. “I’m like clockwork; I’m almost boring.” Up at 5:30 to work out for an hour, breakfast with family, in the studio for e-mail at 7:30, begin painting at 8. Break for lunch at noon, return at 1, paint until 6, dinner with family, then return to the studio and paint for several more hours — often until midnight.

Why such a killer schedule? “By the end of my life I think I will have lived to only paint 10 percent of the paintings in my mind,” he says. “Since I became a full-time artist in 1993 I’ve painted 600 paintings, and that’s still just a small fraction of the ideas I have. I’m racing the clock.”

This is the fourth studio the 48-year-old Banovich has put together, maybe the ultimate. It’s been informed, he says, by the errors in its predecessors. This might be a parallel to the trajectory of his life. Way back in the 1970s, a Montana newspaper ran a feature on a local 12-year-old that began: “John Banovich plans to be a wildlife artist and he already has earnings in the bank toward the day when he goes to college to major in art.” Somehow, an adult Banovich got sidetracked into bodybuilding and a career as a personal trainer before returning to what was so obviously his passion. Here’s what he now says about his painting: “I would pay money to do it. If it was illegal I would do it.”

He also thinks he may have found something that earlier eluded him. “My first marriage ended in divorce because I was married to my painting. I found you have to strike a balance. When I’m painting I’m never in here less than 10 hours a day, sometimes 20. But there’s an ebb and flow throughout the year. Sometimes it’s painting 80, family 20; sometimes family 80, painting 20.”

Even so, this studio is clearly more than a building to him, more than a functional workplace. “It’s a place where you’re going to do your most intimate things,” he says. “It’s a womb where creativity is nurtured and ideas are conceived, born, given life. The more you can be yourself in that place, or find your true self, the deeper it’s going to translate into your work.” 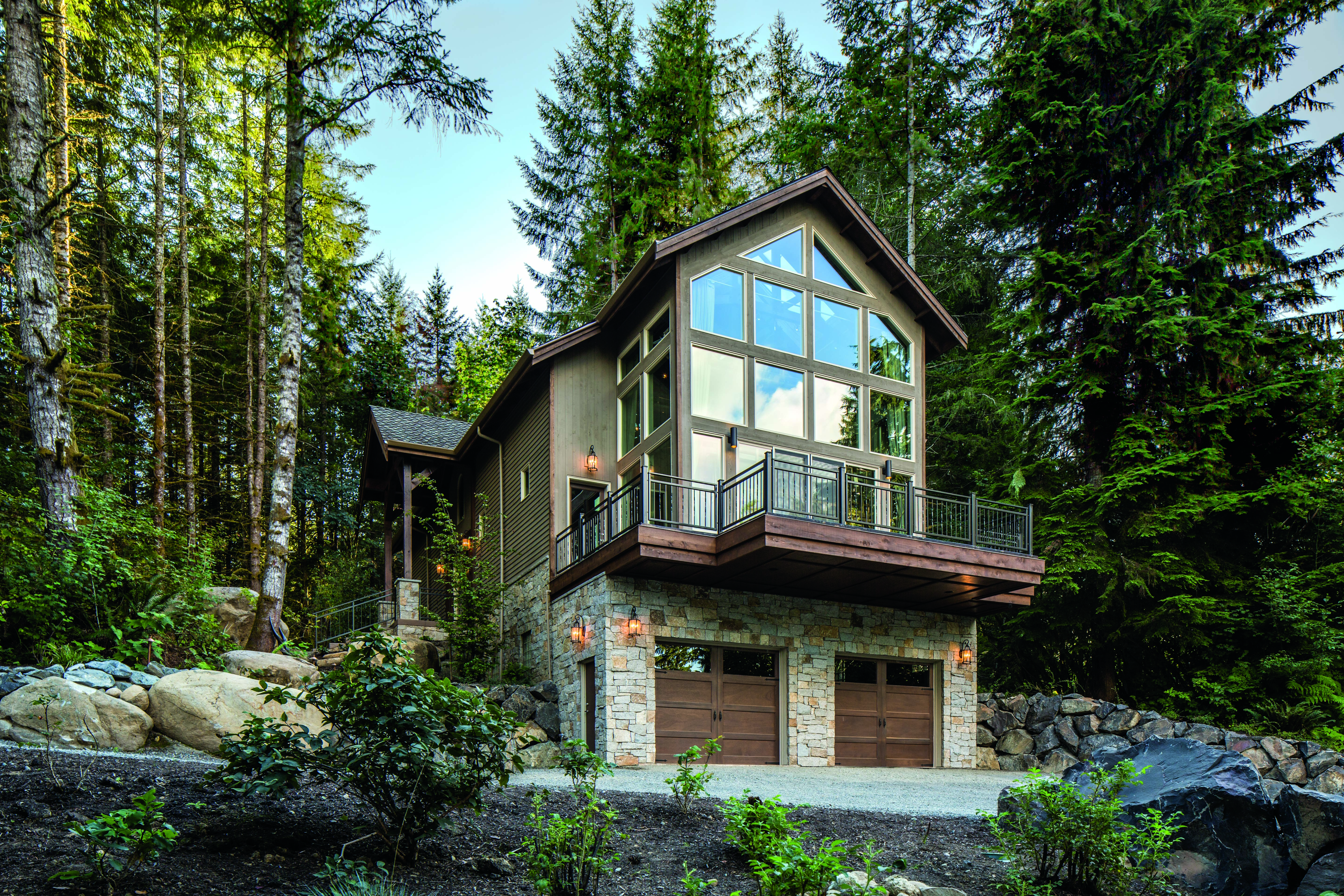 The wooded site and architecture both provide the artist with “a little bit of the feel of Montana,” his former home. 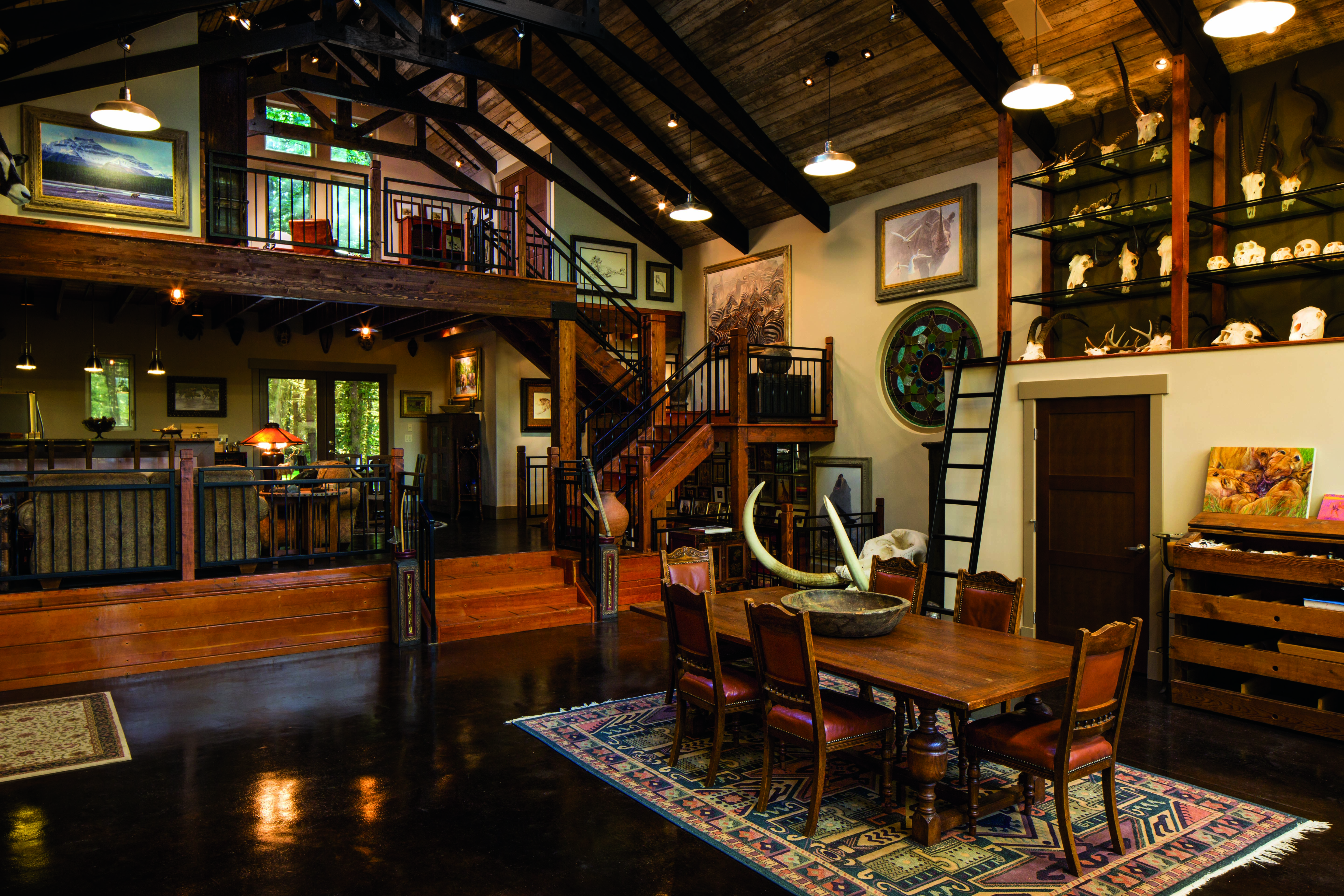 The studio’s interior is rich in dark, heavy wooden structural pieces, art and artifacts from around the world, and furniture with a distinctly masculine air — a Hemingway aesthetic, says Banovich. 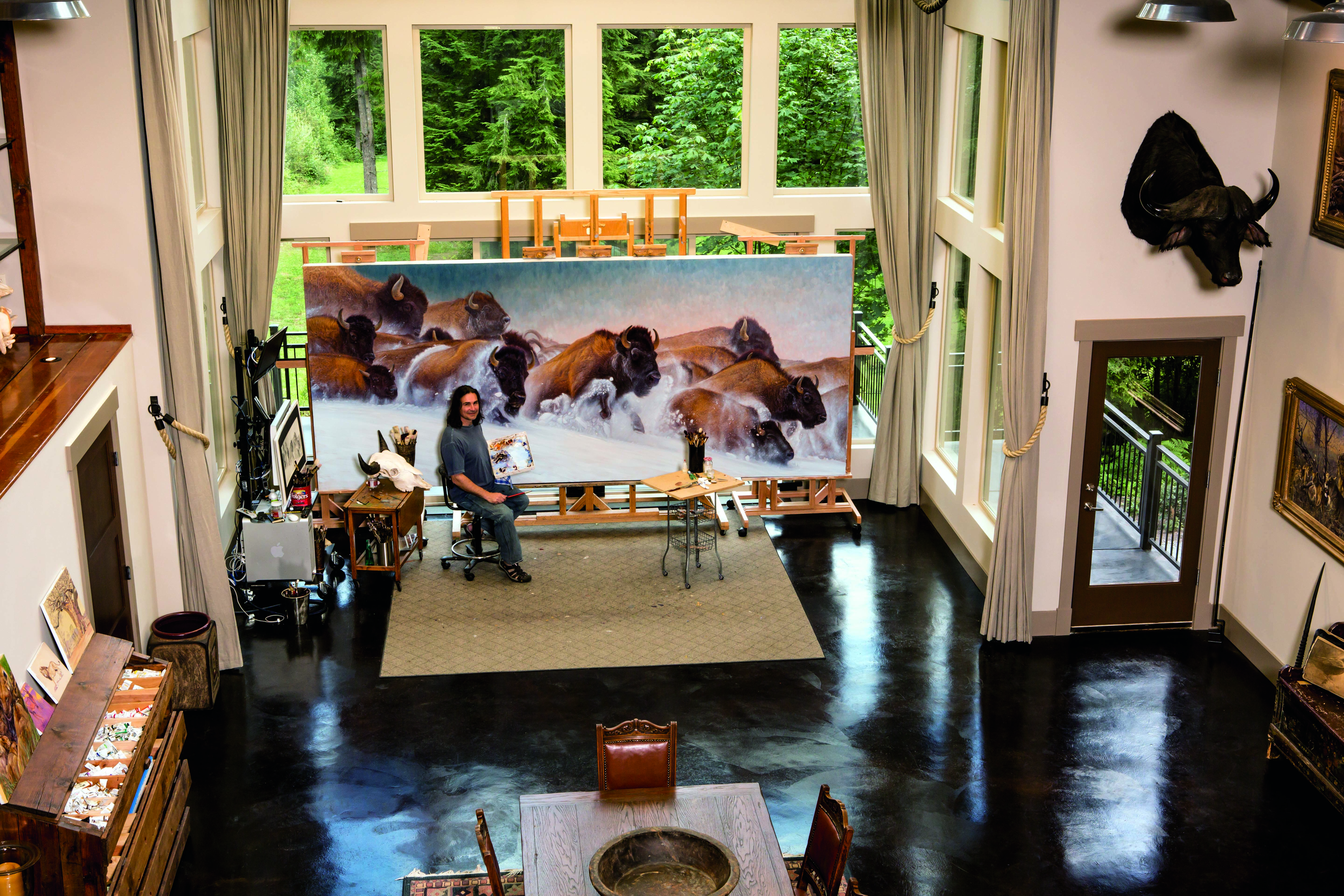 Banovich sits at the big canvas of his current commission, a 6-by-14-foot painting of a bison herd for a club in Montana. Daylight from the windows on three sides can be controlled with the drapes.