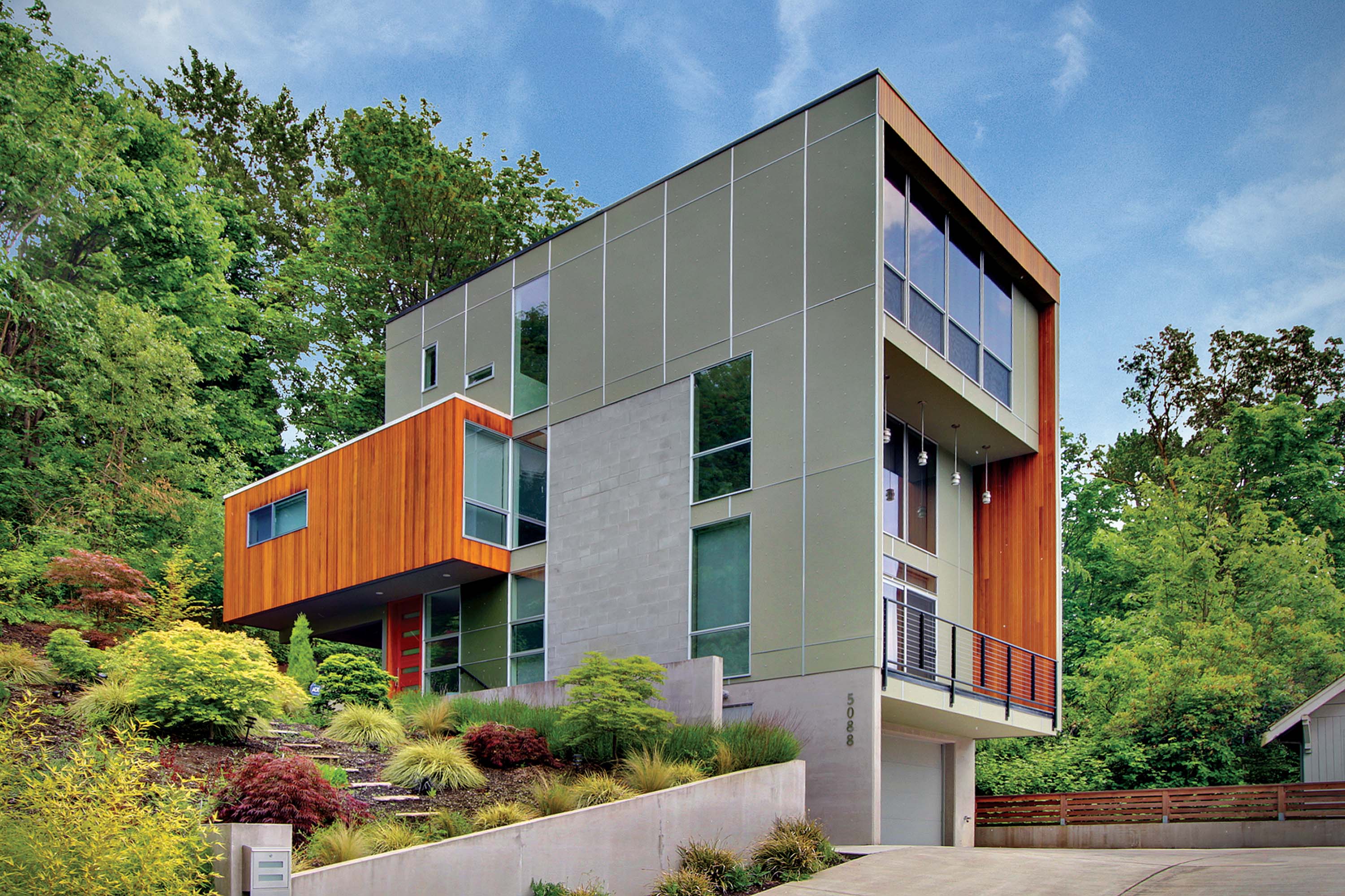 Spore architects made best use of a small lot by building vertically in this 2,300-square-foot home.

04 Aug Ones to Watch: Architect Aaron Kang-Crosby of Spore Architecture

Working within the constraints of zoning restrictions, architect aaron Kang-Crosby, principal at Spore Architecture in Seattle, Washington, was left with a few choices — one of which was to go up.

“This worked out well since the owners had their mind set on a tower house with a small footprint,” Kang – Crosby says.

Built on a steep slope, the house pushes the private areas to the back and opens up to a double-height loft space toward the view, with an all-glass space.

Due mainly to the ingenuity of the design, the home makes use of its height to give the impression of space. Sleek, clean lines reveal small details that have a huge impact on the feel of the house. The mezzanine loft area opens out to the living room and a big barn door closes the mezzanine from the private spaces. The upper level has an aluminum footbridge leading from the master bedroom to the master bathroom.

“When the client came to us they already had a site,” Kang-Crosby says. “It was steep with a pretty good slope. They wanted a double-height living room with a lot of glass because of the view on one side. And they wanted a loft, a two-story living space with a mezzanine looking down into it. That was our starting point.”

Aside from the small footprint, the zoning restrictions introduced a maximum height of 35 feet from the ground level to the highest point.

“Luckily, the slope gave us an extra 5 feet,” he says. “But with four stories, if you include the garage, it still isn’t that much room.”

To find a solution to the space puzzle, Kang-Crosby divided the house into two sections.

“We just couldn’t end up having a box that went straight up,” he says. “So we did two things, the mezzanine portion is its own separate box.”

To add more depth in the space, Kang-Crosby put a slot that goes up through three stories.

“If you stand in the kitchen and look up you can see to the top floor,” he says. “You get that full height of 25 feet from the slot.”

Another interesting feature is the footbridge.

“To get to the master bedroom you have to cross that slot over an aluminum grate footbridge,” he says. “So it’s its own thing.”

In all that, the end result is a refined, polished home. To get that, Kang-Crosby eliminated anything that wasn’t useful or didn’t make the space better.

“If you do that it comes across as utilitarian,” he says. “The client was looking for a space that didn’t feel typical, like a developer house. One of their requests was using a concrete block.”

“We put in a two-story-high wall made from concrete masonry which you can see from the outside, but it’s also in the inside — in the living room,” Kang-Crosby says. “It makes the space a little more industrial. The metal railings add to that effect, as does the aluminum grate on the foot-bridge.”

A three-bedroom home with a total of 2,300 square – feet — including a garage, a main floor, a mezzanine and an upper floor — the West Seattle residence packs a big punch in a limited space. 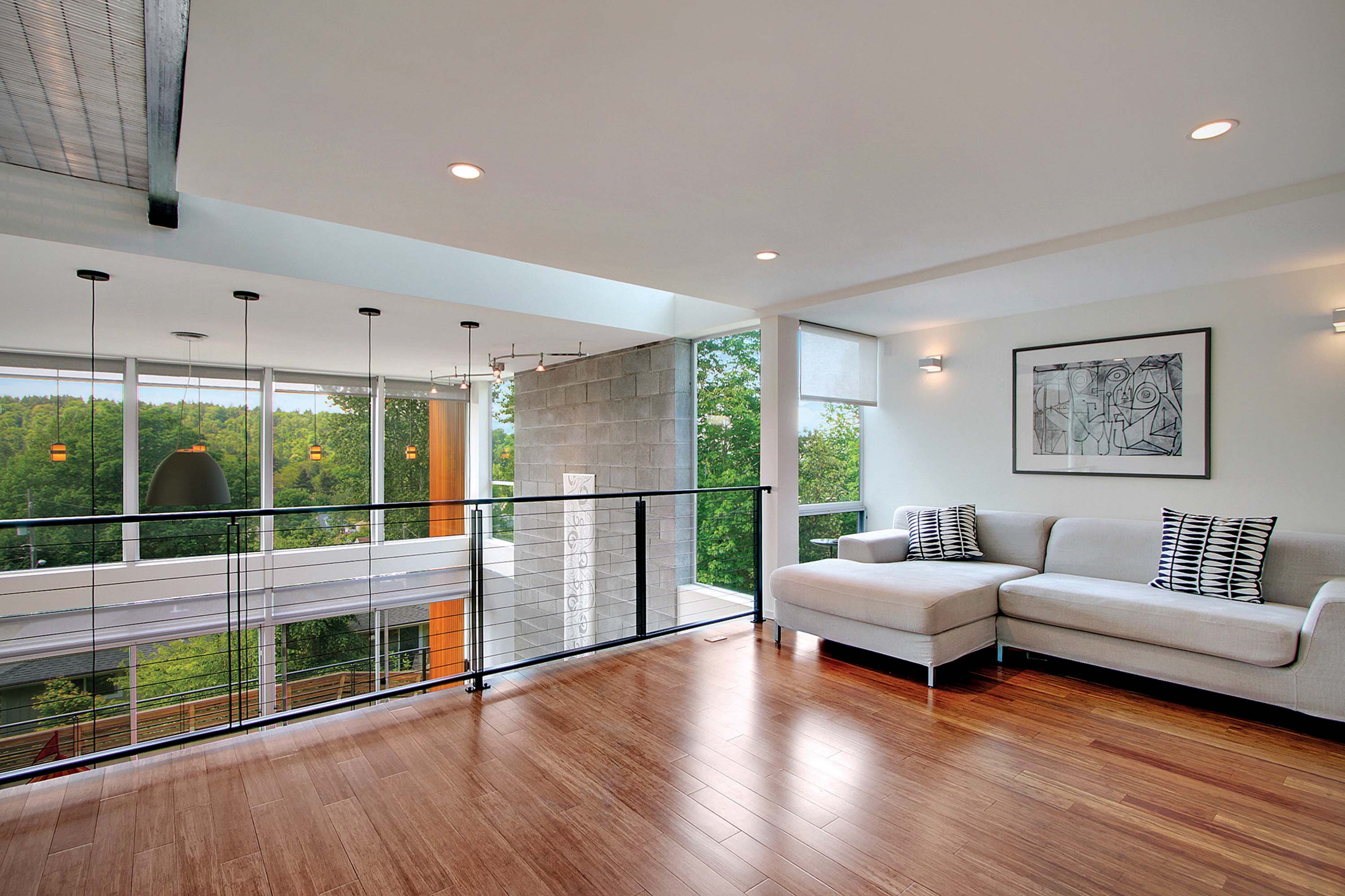 A two-story concrete wall and metal railings along the mezzanine add an industrial flavor to the clean lines of the home. 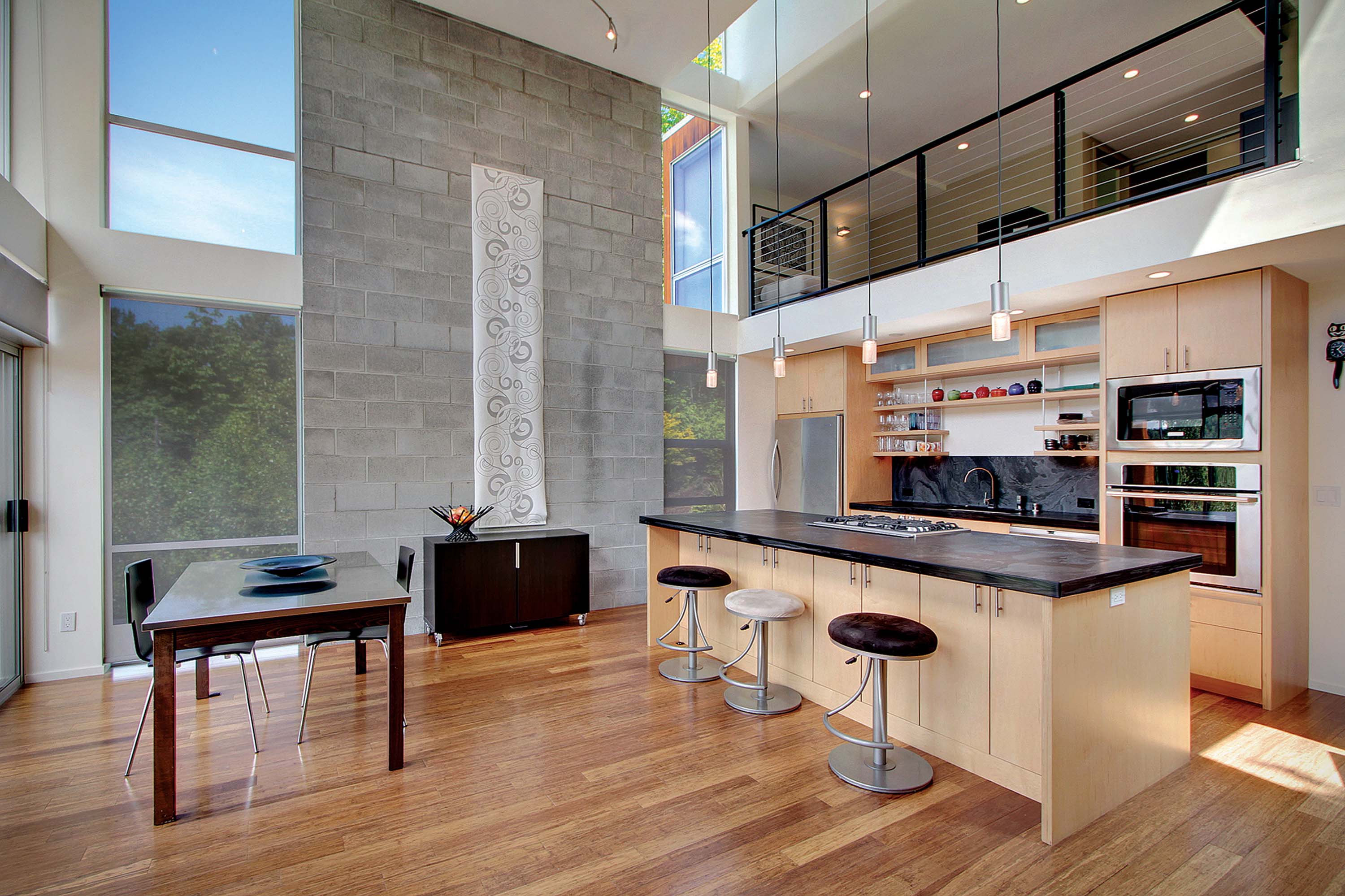 A mezzanine looks out over a modern kitchen and dining area.