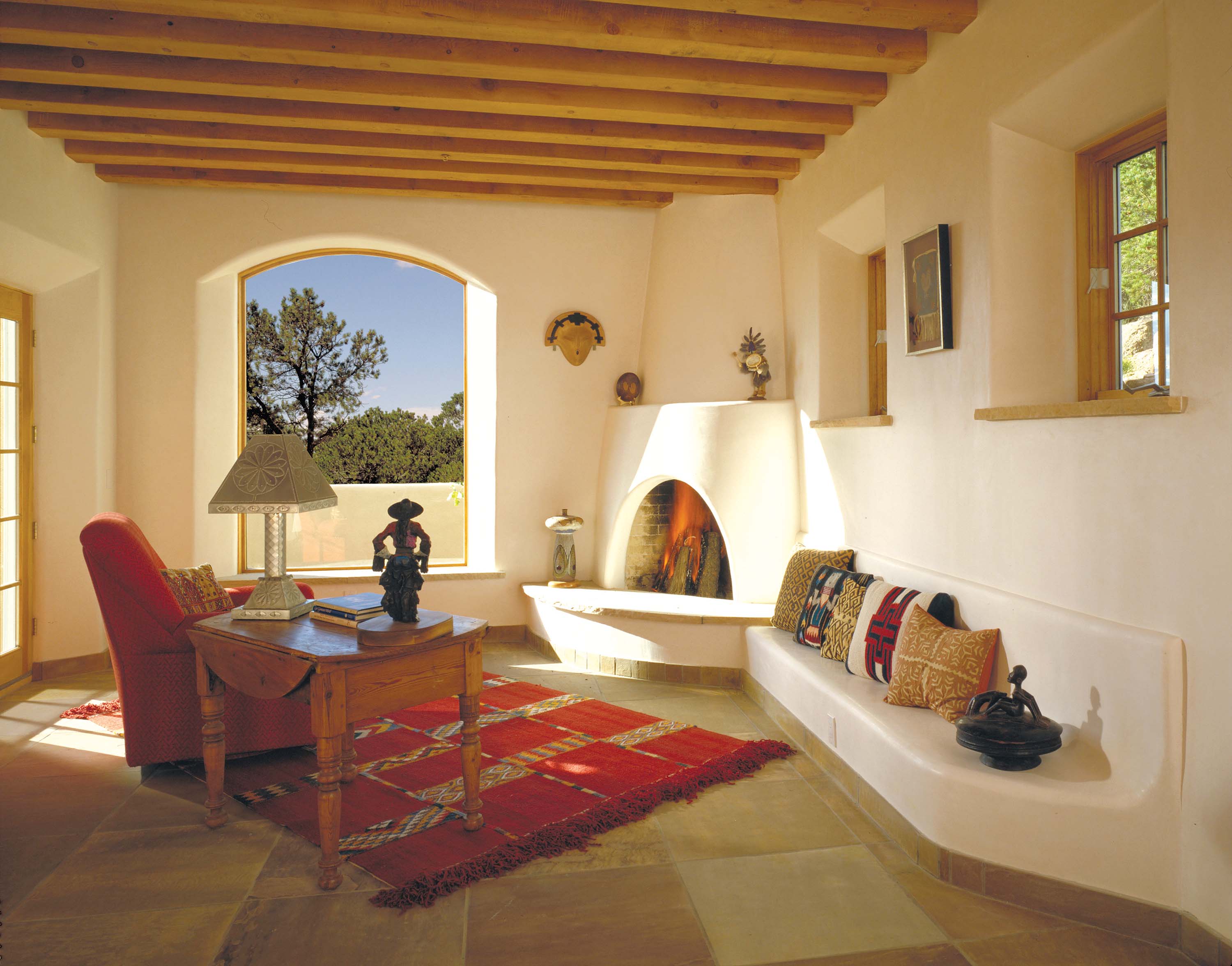 This thoughtful sitting area offers both extraordinary views and solitude.

06 Mar Ones to Watch: Jon Dick

For Jon Dick, of Archaeo Architects, it’s important to keep the home in the context of the landscape upon which it sits.

“I’m very drawn to the landscape and nature,” he says. “In all of my work I try to open the house up to nature. I’m fortunate in New Mexico there’s the ancient vernacular used in the old ruins of the Anasazi that I can use as well.”

This was the case in the Ettinger Residence, located just outside of town in the foothills of Santa Fe. His client had a very large Native American art collection and wanted the architecture to complement the art.

“I had a style in mind and the key was how to design the house on her property, which was triangular but fairly steep, with a nice view of the city of Santa Fe,” Dick says.

Because of zoning requirements, Dick made sure the structures had a low profile and didn’t detract from the views.

“At the time my client was a widow,” he says. “The challenge was to design the house for a single person and still have it be large enough to handle receptions for 150 people. That was a very unique aspect.”

To address that need, Dick designed a long, curving gallery off the circular living room. The living room opens out to a portal, or an attached covered porch; along the flat wall is an acequia, or a stream.

“The whole town of Santa Fe had a lot of acequias that were used to water the crops,” Dick says. “The stream flows inside the home, along a circular path, past the entry to the outside where the interior and exterior are intertwined.” The stream wraps around the kitchen and dining room.

“The design incorporates nice light that drops into the gallery space,” Dick says. “During a full moon, the whole room has a glowing blue light.”

Dick’s main goals in designing the house were to respect the landscape; take advantage of the sweeping views, the changing light and the wind; as well as to blur the lines between inside and out.

“It’s all about nature, light, water and boulders,” Dick says. “The hill has granite boulders. The hillside is all squares and rectangles, but I cut through that with a curved wall that emphasizes the curve of the hill. It anchors the house to the site in a visual manner that implies somehow the house ascended up from the ground as opposed to be imposed on it.”

The back of the house — the master suite, sitting room and office — opens up to views of the city.

“The owner isn’t a serious cook so the kitchen was downplayed for the size of the house, which is 6,400 square feet, on about 4 or 5 acres,” Dick says. “There’s also a guest house for family and friends.” 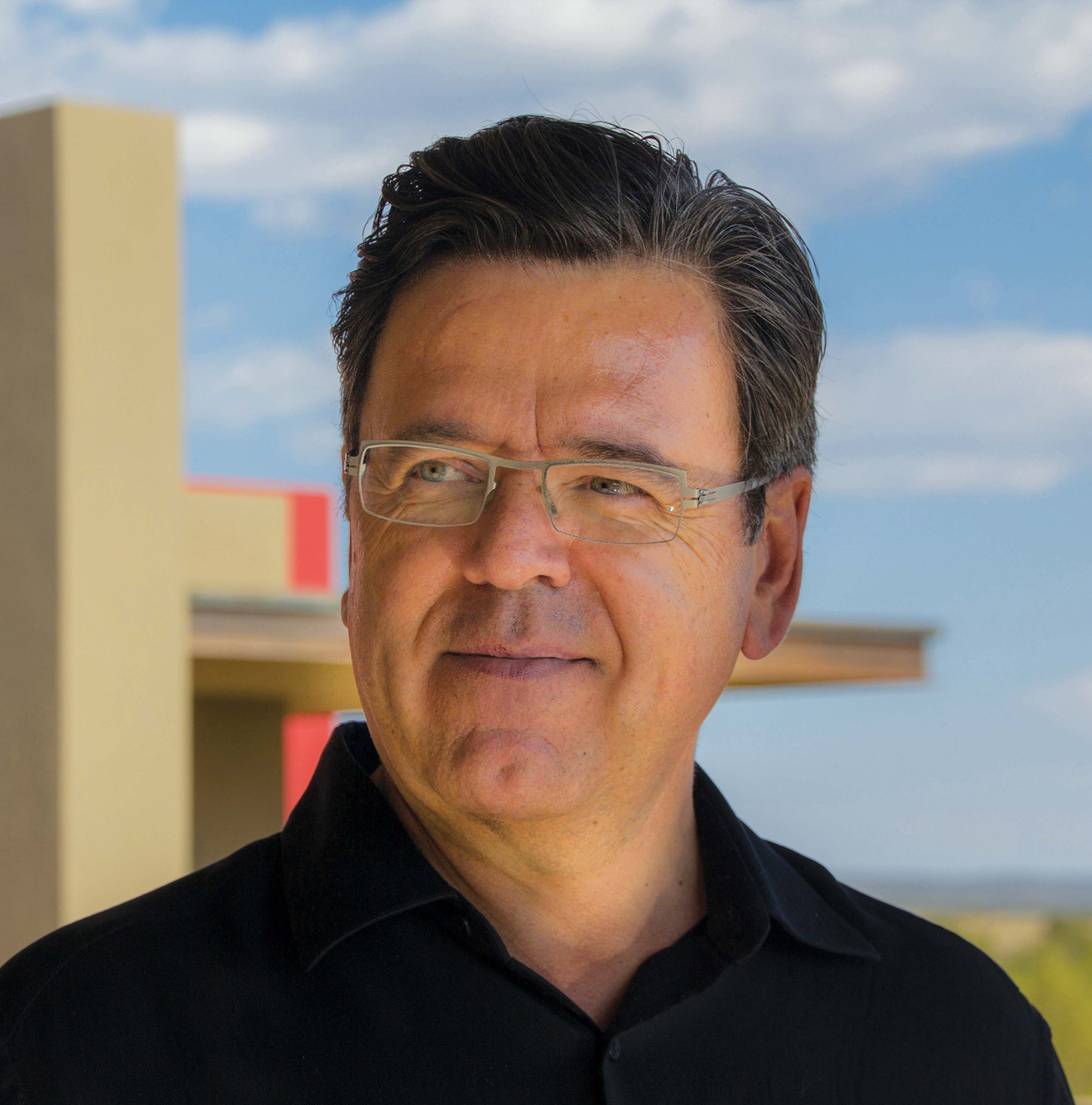 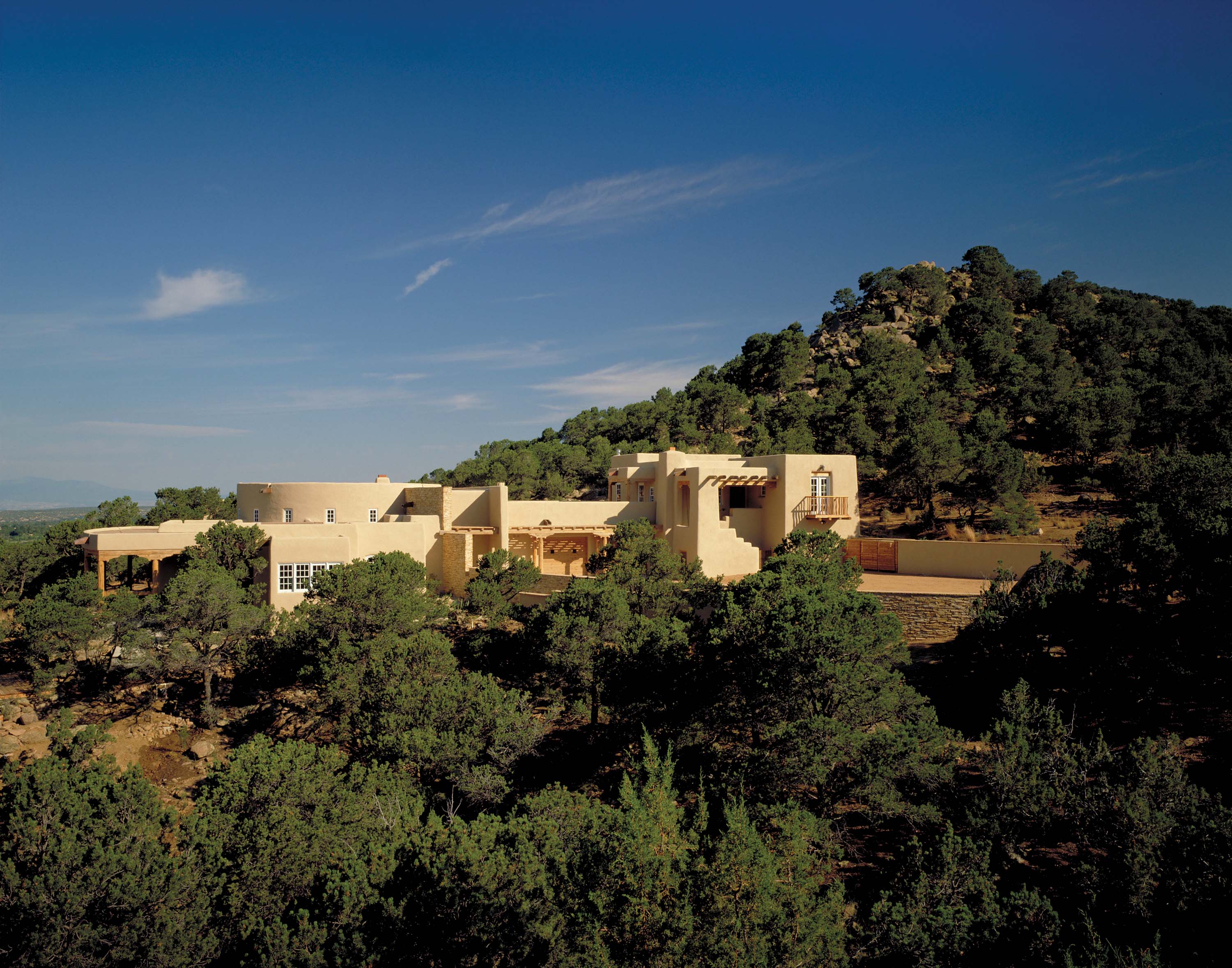 Jon Dick’s design anchors the home within the natural setting and landscape of the foothills outside of Santa Fe. 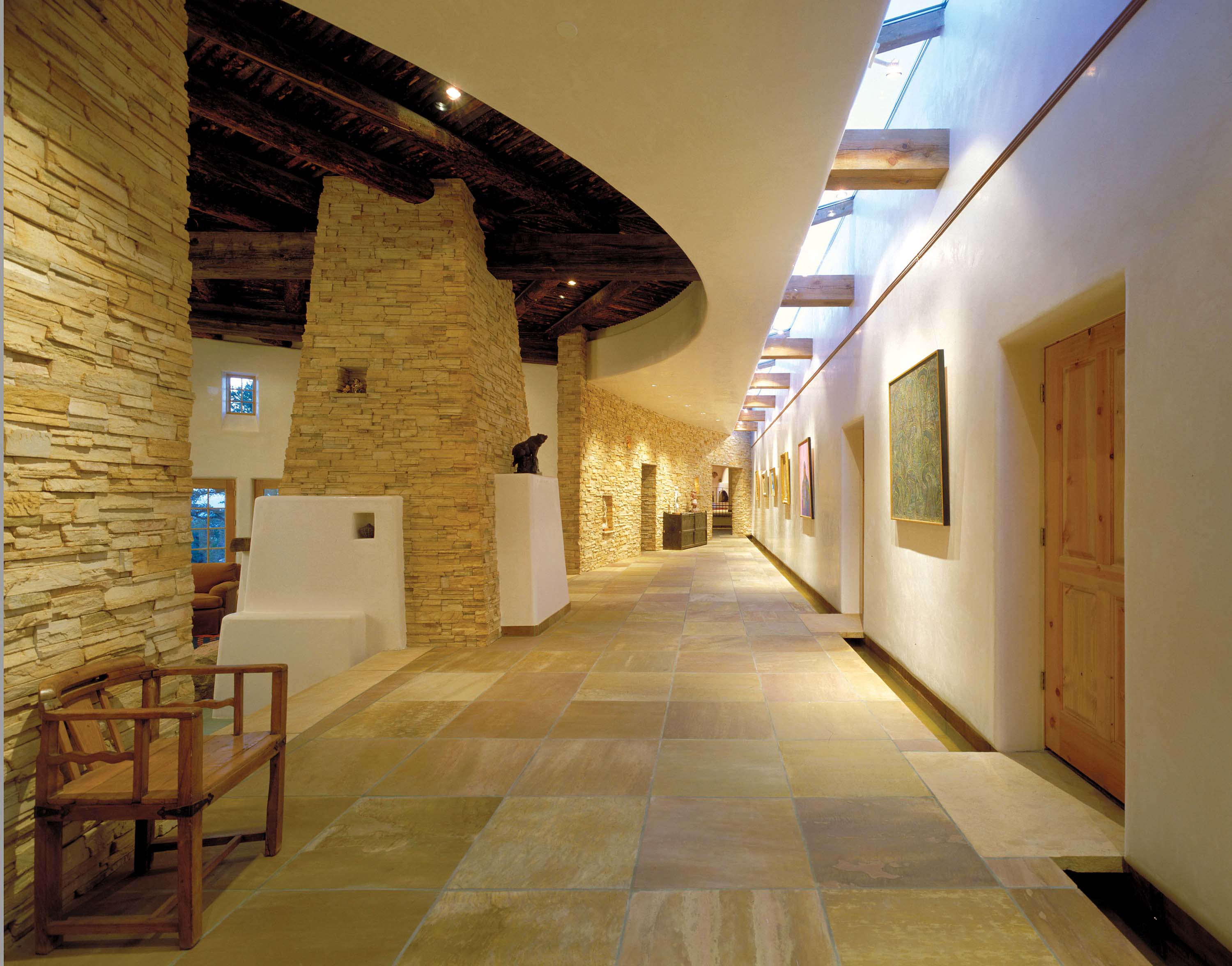 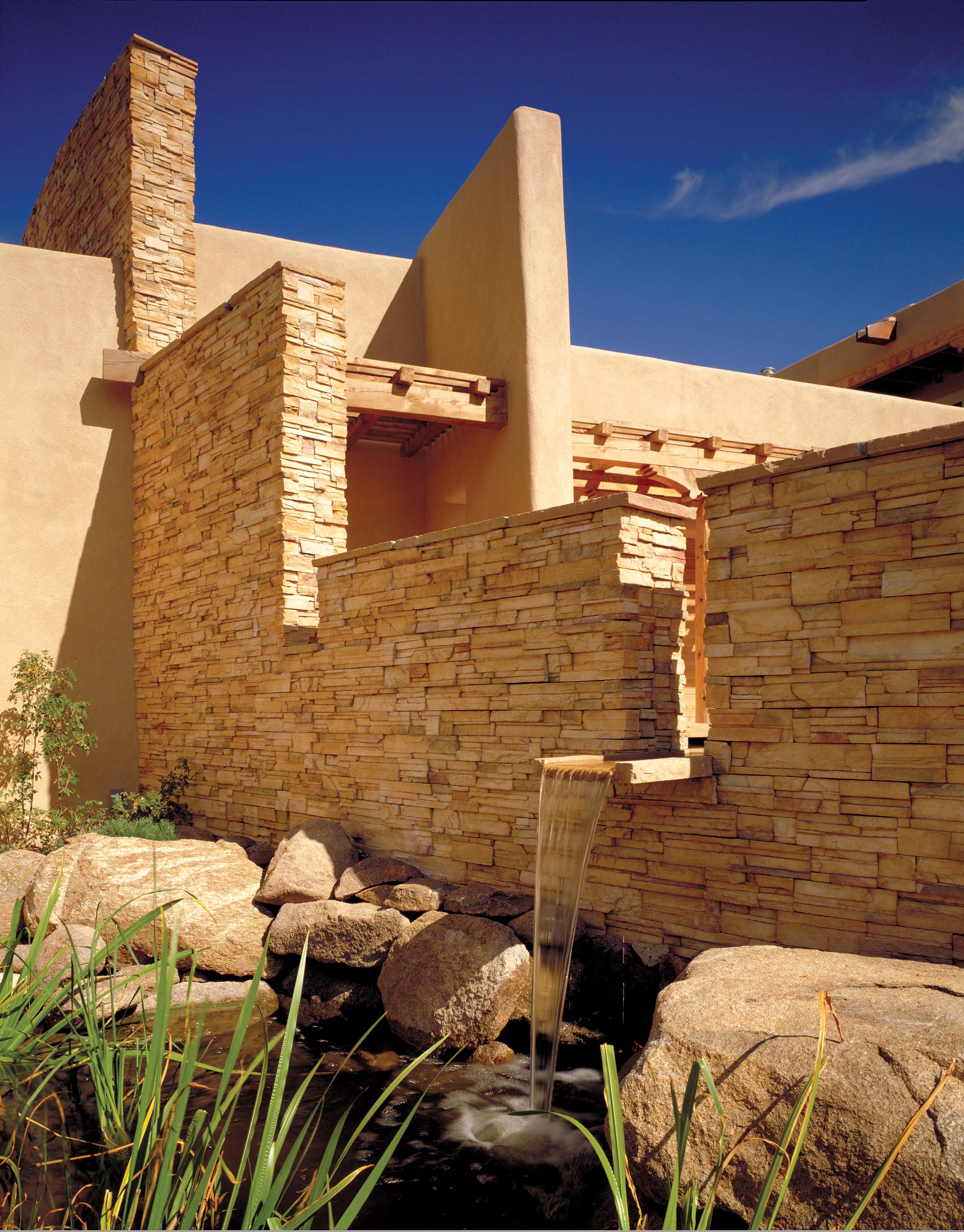 The waterfall here is the end result of a stream that runs through both the interior and exterior of the home.