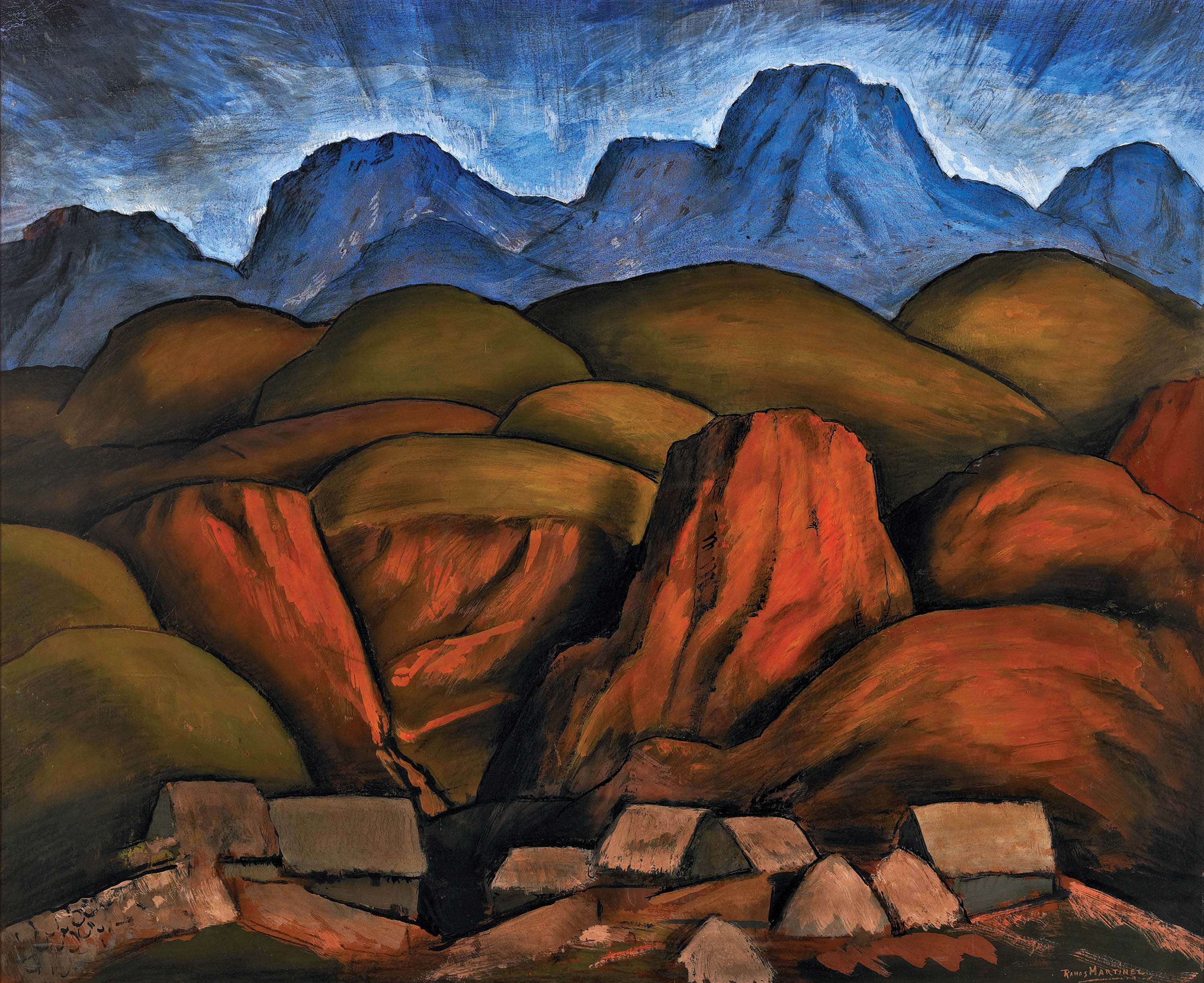 When Mexican Modernist Alfredo Ramos Martínez set up his studio in Los Angeles in 1929, the elegant, quiet, sophisticated painter was primed for the creative freedom offered by southern California at that moment in time. And Los Angeles was ready for him.

The city in the 1920s and ’30s was experiencing an artistic renaissance, combined with what has been called its “Mexican flirt.” California artists, collectors and intellectuals were inspired by the Mexican Modernist aesthetic and captured by an idealized view of the Mexican Revolution. Diego Rivera was striding across the international stage, and Hollywood was enthralled by the exotic beauty of Mexican actresses, even as the Great Depression spread and Mexican migrants were deported.

Ramos Martínez moved to California not only for the art community, but also in large part for the health of his infant daughter, Maria, born with a congenital bone disease. The artist first sought medical help for Maria at the Mayo Clinic in Minnesota. Soon after, the family settled in Los Angeles for its combination of medical facilities and a warm, dry climate. Yet as with many moments in the life of the painter known widely as the father of Mexican Modernism, he found himself in the right place at the right time. As a result, he left a “tremendous legacy in Southern California, adding to a vibrant visual culture,” observes Amy Galpin, Ph.D., curator of Picturing Mexico: Alfredo Ramos Martínez in California.

Picturing Mexico, which opens January 19 and runs through April at the Pasadena Museum of California Art, represents the first comprehensive museum exhibition of work produced by Ramos Martínez in Los Angeles between 1929 and his death in 1946. The show travels to the Nevada Museum of Art May 10, where it is on view through August 17.

Born into a merchant family in Monterrey, Mexico, in 1871, Ramos Martínez enjoyed one of the first of his fortuitous experiences at 14, when one of his drawings was sent to an art exhibition in San Antonio, Texas, and won first prize. The prize included a scholarship to study at the prestigious Academia Nacional de Bellas Artes (Academy of Fine Arts) in Mexico City. His eight years at the academy brought numerous painting awards, yet the young artist chafed at the school’s rigid academic approach and institutional bureaucracy, particularly after becoming aware of the development of Impressionism, Post-Impressionism and plein air painting in Europe. His own natural inclination was to paint — initially in watercolor and later in oils and pastel — based on observations from everyday life.

As it happened, another stroke of fortune provided an unparalleled opportunity for Ramos Martínez to spread his creative wings and encounter some of the most influential creative figures of his time. In 1899, Phoebe Apperson Hearst, mother of American newspaper magnate William Randolph Hearst, attended a presidential dinner in Mexico City where she was taken with the artistry of hand-painted menus commissioned for the occasion by Ramos Martínez. She asked to meet the artist and subsequently offered him a generous monthly stipend to study in Paris.

In Paris, Ramos Martínez interacted with such luminaries as Picasso, Monet, Matisse, Rodin, Sorolla and dancer Isadora Duncan. In 1906, the artist took part in Paris’ annual Salon d’Automne art exhibition where he was awarded a gold medal. In 1910, on the eve of the Mexican Revolution, the painter returned home. Three years later he was appointed director of Mexico City’s art academy, by then renamed the Escuela Nacional de Bellas Artes. Yet Ramos Martínez’s greatest satisfaction during this period was establishing the Open Air Schools project, which offered art instruction to students of all economic classes and encouraged them to freely follow their own artistic visions. An exhibition of work by Open Air School students traveled to Los Angeles in 1926, providing the artist with his first introduction to the city.

It was a happy meeting. Away from the academic politics of Mexico City, the forward-looking lifestyle and Art Deco architecture of southern California inspired Ramos Martínez and allowed him to quickly shed his earlier, European-leaning approach. In Los Angeles, his painting took on a bold, graphic style with the sophisticated color palette, stylized, angular shapes and monumental sense of volume and mass, even in paintings of small scale, for which he became known.

Ramos Martínez’s subject matter shifted as well, turning more fully toward the people and landscapes of Mexico, the home to which he always intended to return. His paintings often featured large-scale, striking portraits of indigenous women, fruit and flower vendors, farmers and other working people, and floral still lifes. “He was remembering, connecting to and invoking his homeland, creating a synthesis of modern forms and a modern vision with his response to his homeland,” Galpin notes.

Already captivated by Mexican art, Los Angeles-based artists Millard Sheets, Hugo Ballin, Leo Katz, Maynard Dixon and others welcomed Ramos Martínez into their midst. Out from under the towering shadow of his better- known contemporaries, Rivera, David Alfaro Siqueiros and José Clemente Orozco — Los Tres Grandes — Ramos Martínez found his place in the light of artistic acclaim. California collectors, art patrons and museum curators were Ramos Martínez’s subject matter shifted as well, turning more fully toward the people and landscapes of Mexico, the home to which he always intended to return. His paintings often featured large-scale, striking portraits of indigenous women, fruit and flower vendors, farmers and other working people, and floral still lifes. “He was remembering, connecting to and invoking his homeland, creating a synthesis of modern forms and a modern vision with his response to his homeland,” Galpin notes.

Hollywood figures including director Alfred Hitchcock, actors Gary Cooper, James Stewart and Charles Laughton, and screenwriter Jo Swerling became collectors, as did San Francisco Bay Area art patron Albert Bender. Ramos Martínez’s first solo exhibition in California, in 1930 at the Assistance League Art Gallery in Los Angeles, was seen by some 18,000 visitors. “People tend to think L.A. in the 1930s had no art, but there was so much going on,” Nieto says.

Among Ramos Martínez’s most thought-provoking inno- vations was the use of pages from the Los Angeles Times and other newspapers as a painting surface. In these works, images of struggling Mexican laborers or indigenous Madonna-like mothers and children are set against the background of beauty ads, financial articles and classifieds. The juxtapositions create subtle yet powerful political state- ments from an artist known as a reserved and modest man. Paintings such as Cabeza de Monja (Head of a Nun) also make stunning use of the columns in classified ads as a structural component in the composition.

Already influential in promoting muralism before he left Mexico City, Ramos Martínez employed his significant fresco skills in creating a number of murals in Southern California. Unlike Rivera and others of the period, he painted murals of serene beauty, rather than for political impact. In these works, remembrance and honoring of indigenous Mexican people and landscapes is elevated to monumental scale. Among the most magnificent are murals commissioned for the Chapel of the Santa Barbara Cemetery. Here, a strong Modernist aesthetic converges with deep Catholic devotion and the artist’s vision of the sacred in simple, everyday lives.

When Ramos Martínez died in 1946, just four days before his 74th birthday, he left unfinished a major mural project at Scripps College in Claremont. The Scripps frescoes have been left as they were, allowing a glimpse into the artist’s process. In these and all his murals, Galpin points out, Ramos Martínez was “very attentive to the architectural space. There’s a wonderful ebb and flow of the murals with the architectural environment.”

Although Ramos Martínez’s contributions were welcomed and acknowledged during his lifetime, his star quickly faded in the glare of the better known and more controversial Mexican muralists. “He was deposed by Diego Rivera,” as Nieto puts it. As early as 1935, both Ramos’ talent and his lack of self-promotion were singled out by early 20th-centuryCalifornia artist Brooke Waring, who wrote in the North American Review: “The most obscure, the most retiring, the most self-effacing, and yet the most important man in the Mexican Renaissance is Alfredo Ramos Martínez, the inventor.”

That obscurity has begun to be reversed in the past couple of decades, with major exhibitions of his art both in Beverly Hills and Mexico City in 1992, and the publication of Stern and Nieto’s book in 2009. In 2007, a Ramos Martínez painting topped the Latin American art market at Christie’s in New York, with a winning bid of more than $4 million. If the painter whom Nieto calls “a cultural conduit between two continents and three countries” is gaining fresh, well-deserved attention, it is through the value of his artistic contributions, she says. “Ultimately it’s his doing. As art historians, we just plug away and work — and fall in love with him.” 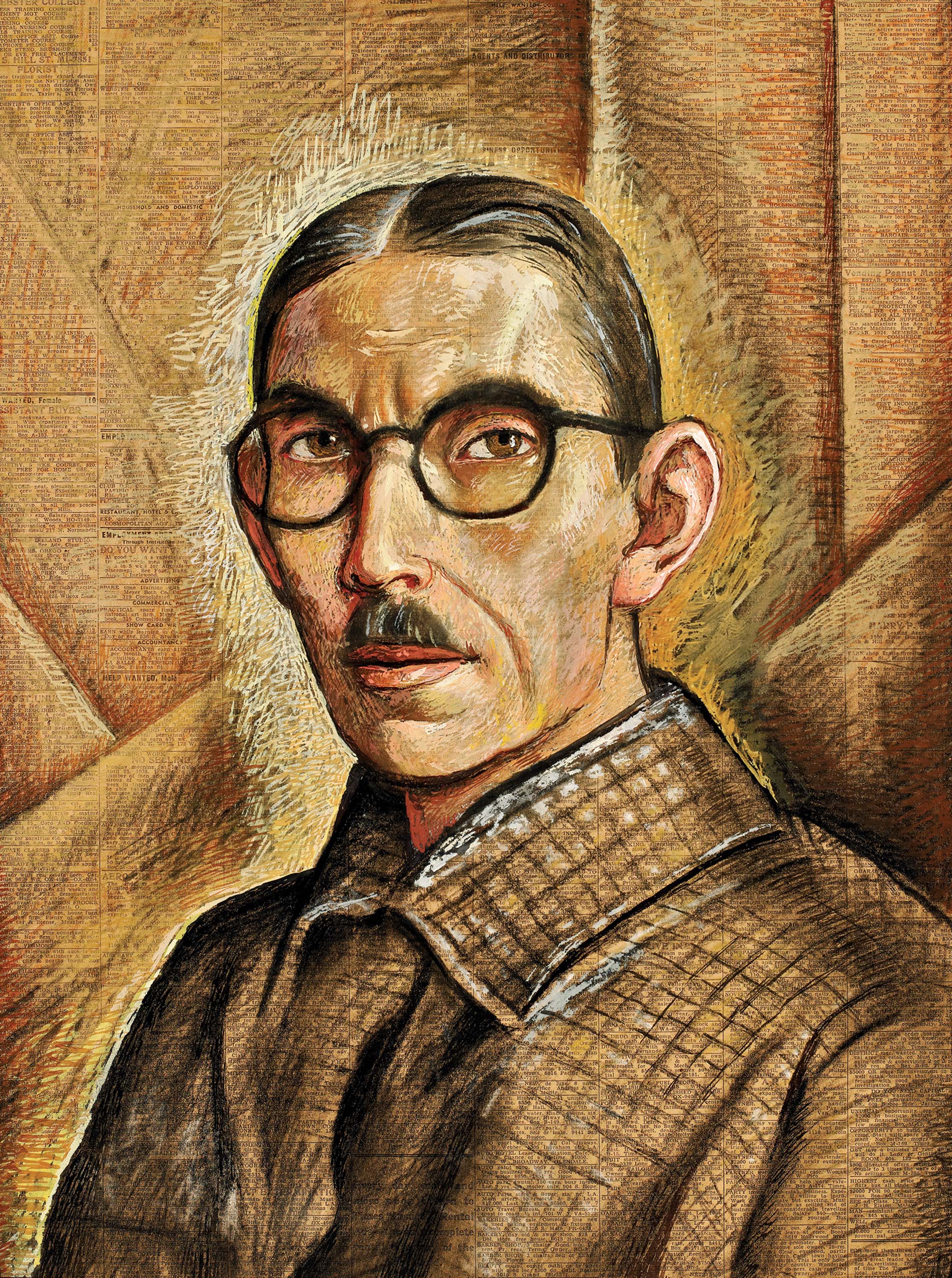 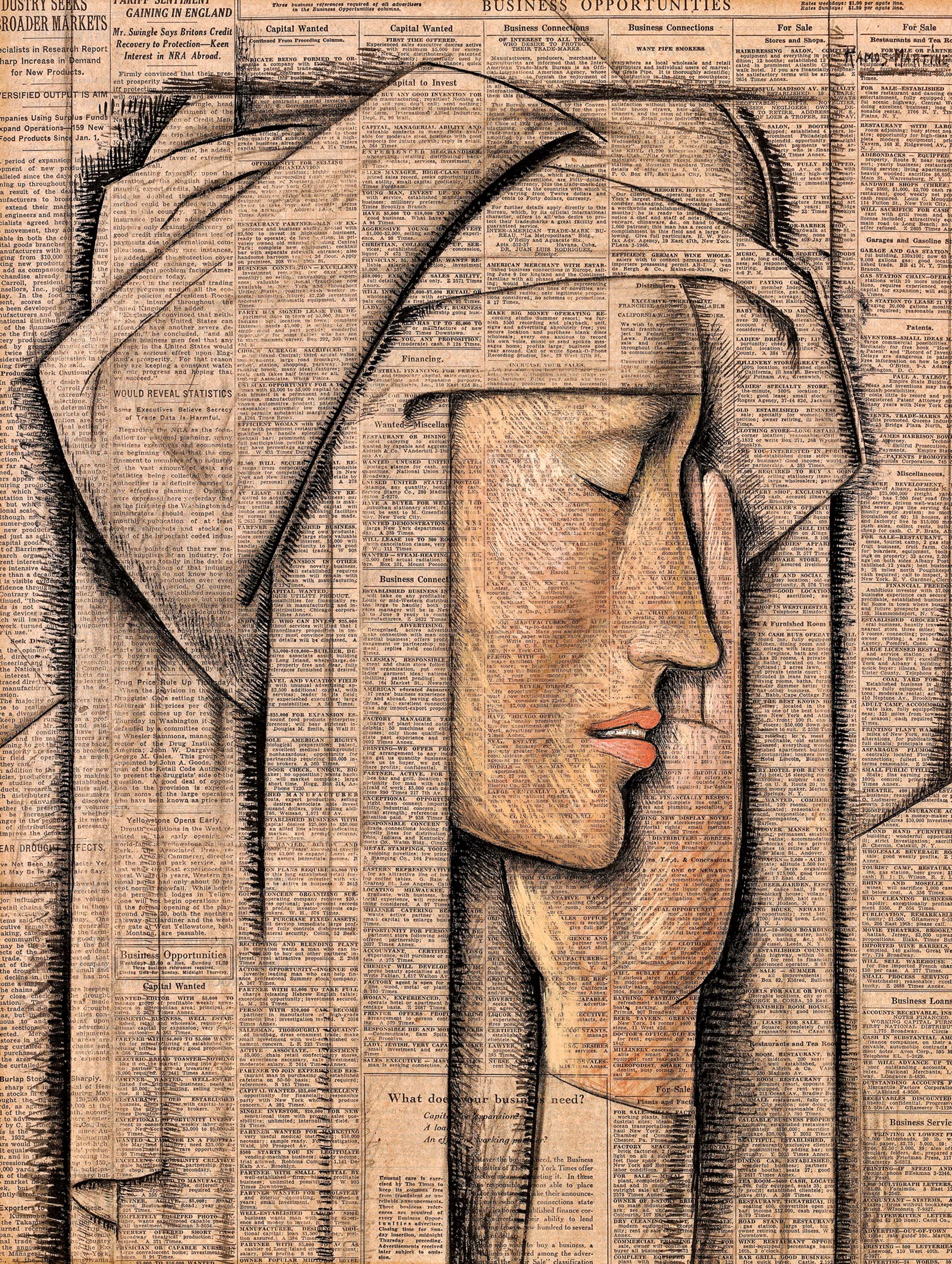 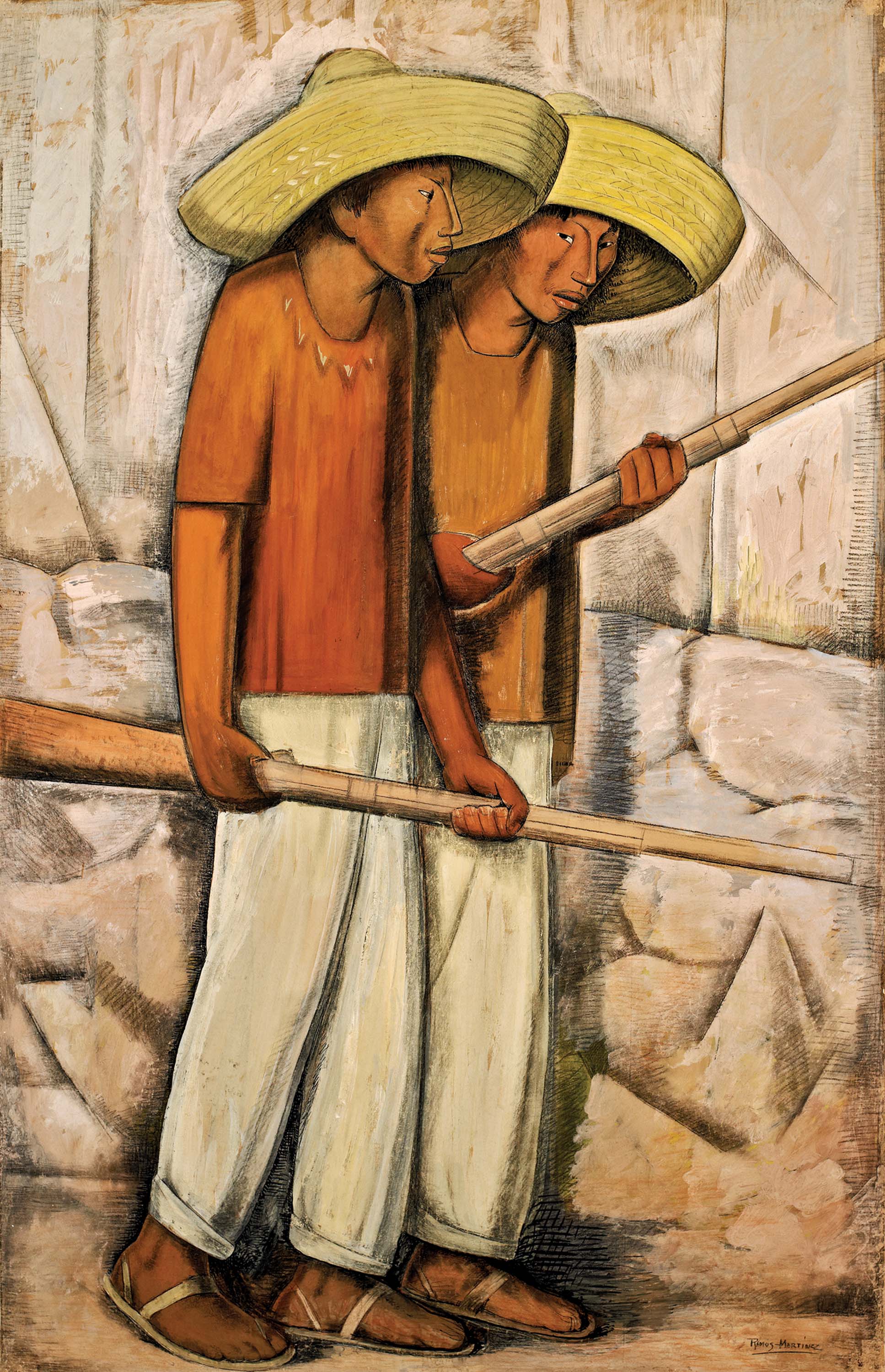 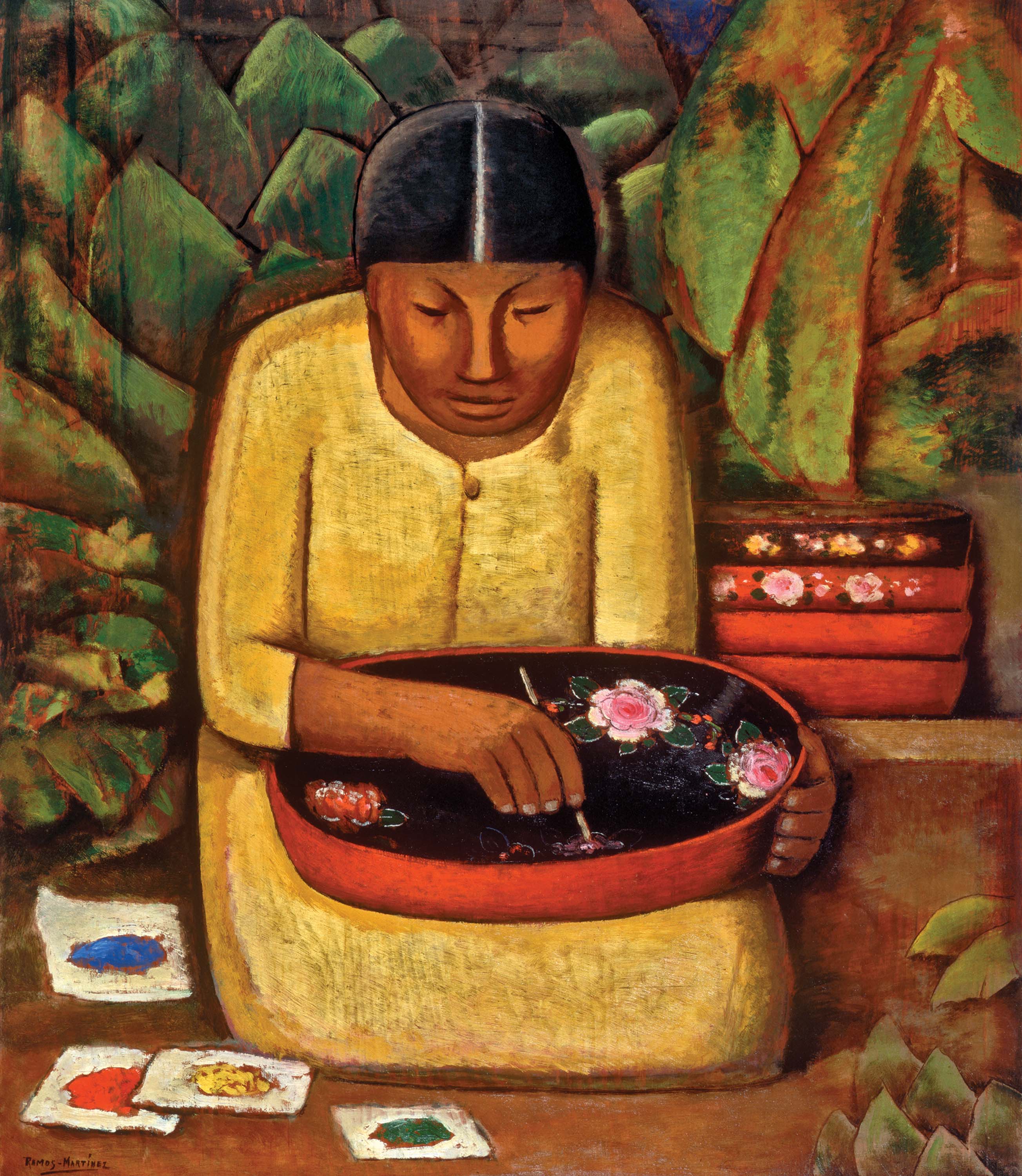