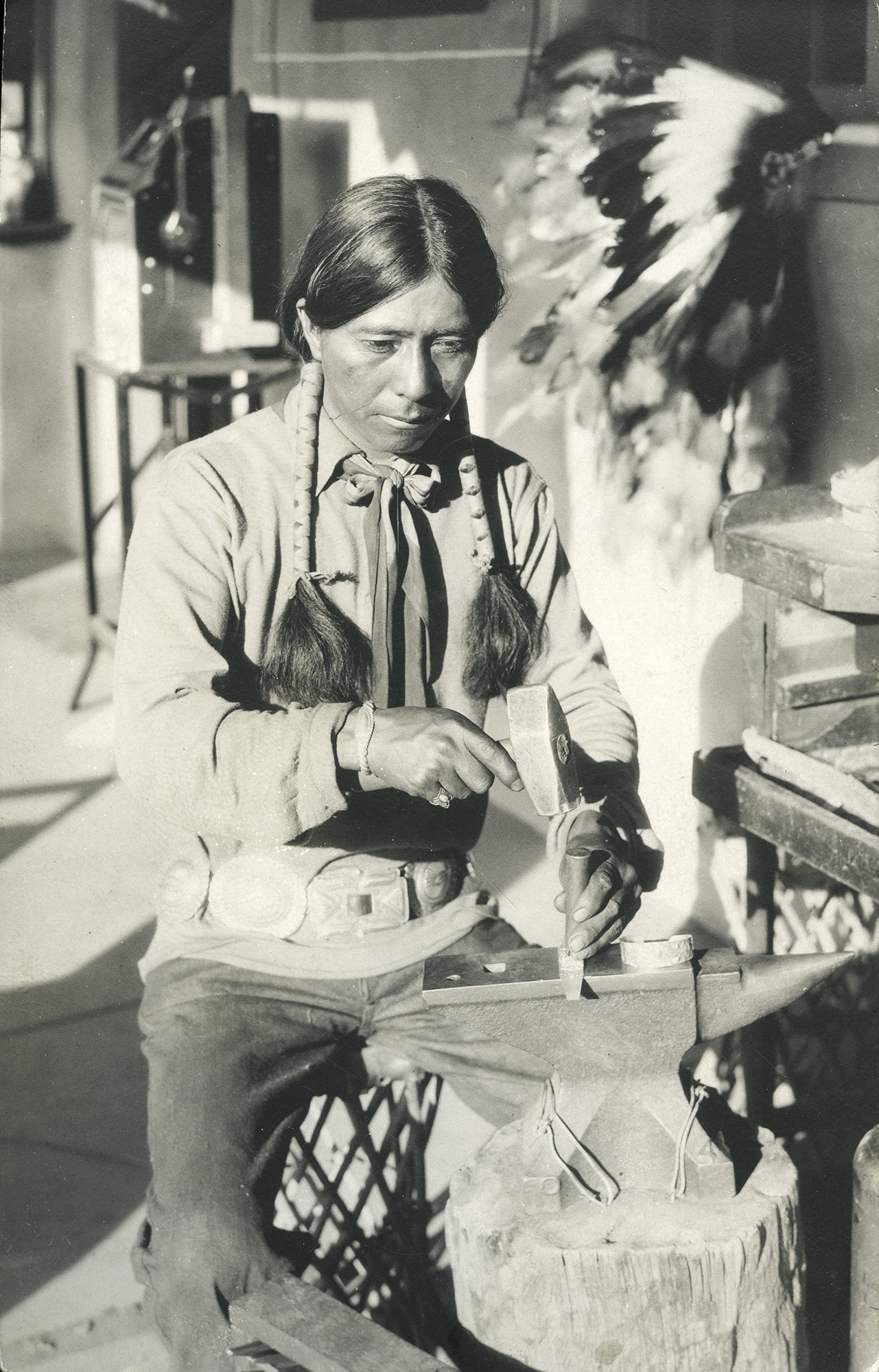 Awa Tsireh at his work bench at the Garden of the Gods Trading Post, undated postcard | Heard Museum Collection, gift of Joe and Laurel Traugott

When San Ildefonso Pueblo artist Awa Tsireh [1898–1955] traveled to New York City in 1931 for the Exposition of Indian Tribal Arts, which included several of his paintings, a reporter seemed intent on eliciting a “golly gee” in response to his first experience in the big city, according to a newspaper article at the time. The quiet, intelligent artist expressed genuine wonder at seeing the ocean, but he wasn’t taking the bait when repeatedly asked what impressed him about the city and its tall buildings. When he mentioned that he and the other Pueblo artists had been taken to the top of the Empire State Building, the reporter excitedly asked, “What did you think of it?” Awa Tsireh replied, “I thought it was high.”

The reporter may have been disappointed, but in the 1930s and ’40s Americans in New York City, Chicago, San Francisco and other major cities were clearly impressed with the paintings of Awa Tsireh (pronounced A-Wa See-day), one of the first Pueblo artists to receive national and international recognition, according to Diana F. Pardue and Norman L. Sandfield, authors of Awa Tsireh: Pueblo Painter and Metalsmith. Significantly, this attention came at a time when American artists, collectors, poets, writers and anthropologists — some of whom became patrons — were beginning to appreciate Native art for its aesthetic and artistic qualities, rather than simply in an ethnographic sense.

It was perfect timing for Awa Tsireh, also known as Alfonso Roybal, whose name in San Ildefonso’s Tewa language means Cattail Bird. Born in 1898, he was the son of Juan Estabal Roybal and Alfonsita Martinez, a San Ildefonso potter on whose pots her son is thought to have painted traditional Pueblo imagery as a young man. As a boy, he attended the Pueblo’s day school, where teacher Esther Hoyt gave her students paper and paints and encouraged them to draw and paint what they knew, including ceremonial dances and daily life. Awa Tsireh took to it naturally, perhaps also encouraged by his uncle, Cresencio Martinez, a skilled watercolor painter who died young in the 1918 influenza epidemic.

In 1917, when Awa Tsireh was 19, his own quickly advancing watercolor skills were noted by poet Alice Corbin Henderson, wife of painter and architect William Penhallow Henderson and an active figure in Santa Fe, New Mexico’s early-20th-century cultural life. Alice became one of Awa Tsireh’s key promoters, believing him to be the best among a small group of rising Pueblo painters. The Hendersons provided the young man with high-quality art supplies, purchased a number of his paintings and welcomed him many times into their Santa Fe home. In 1925, Alice wrote an article about the artist for The New York Times, illustrated with four of his paintings.

Other Anglo-American patrons, including painter John Sloan, writer Mary Austin and philanthropist Amelia Elizabeth White, became involved in championing Awa Tsireh’s art, which, over two decades, was included in numerous exhibitions around the United States — at the Arts Club of Chicago, the Art Institute in Indianapolis (along with Santa Fe muralist Olive Rush), and the Museum of Modern Art in New York City, among others.

In 1929 and 1930, the work of Awa Tsireh and other Native American artists was represented at the Ibero-American Exposition in Seville, Spain. Near the end of his life the French government honored Awa Tsireh with the Palmes d’Académiques, an award for artists and academics. And today, his paintings are in numerous private collections and more than 30 museums, including the Smithsonian American Art Museum in Washington, D.C.

Yet for all the interest in his two-dimensional art — attention that was renewed with a 2015 and 2016 show at the Smithsonian American Art Museum — Awa Tsireh’s exceptional talent in another medium has remained largely unknown. Beginning in the early 1930s and continuing through the ’40s, the artist spent summers at Garden of the Gods Trading Post in Manitou Springs, Colorado, where he created beautifully designed and intricately stamped metalwork. Along with a handful of other Native artists, he sat at a workbench in the trading post and produced silver brooches, bracelets, spoons, forks, bowls and large trays, mostly in silver and copper, primarily for the tourist trade.

Until recently there was little documentation of this aspect of Awa Tsireh’s work. Then, a few years ago, Sandfield, a Chicago-based collector and researcher, saw a charming silver skunk brooch by the artist in a Scottsdale, Arizona, shop. As a longtime donor and collaborator with the Heard Museum in Phoenix, he purchased the pin as a gift to the museum. It was the start of an intensive period of research and documentation that culminated in the first major museum exhibition to shine a spotlight on the artist’s metalwork, along with his paintings, at the Heard Museum. The show, which includes some 200 pieces in metal and 40 paintings, was co-curated by Sandfield and Pardue, the museum’s curator of collections. Much of the little-known information about Awa Tsireh was discovered by Pardue and Sandfield during their research for the exhibit and is documented in their accompanying book, which was published by the museum.

“We had no idea what we would encounter,” Pardue says of their foray into the metalsmithing side of Awa Tsireh’s oeuvre. What ensued was a form of detective work that involved tracking down known pieces and working to determine attribution on many others. Some that simply bear the stamped hallmark “Hand Made by Indians” appear to have been created by Awa Tsireh, based on the imagery and high-quality, often-intricate stamp work, Sandfield says. With no dates on the work, little to no collector documentation, and no company records to go by, puzzling out the relative timeframe of various pieces was challenging. It is also unknown how Awa Tsireh first learned to work in metal. Pardue and Sandfield speculate that since he took part in ceremonial dances, he may originally have been hired to dance and paint for tourists at the Garden of the Gods, and learned metalsmithing while there.

One certainty is the quality and aesthetic value of his work. “He had a technical excellence as well as artistic ability that’s exciting to see,” Pardue says. In some cases the artist used multiple stamps on a single piece, each perfectly positioned and aligned to produce fine details in a complex image. “This is a man who knew how to use stamps,” Sandfield says.

Among Awa Tsireh’s recurring imagery in both metalwork and paintings are owls and skunks, and in particular, an owl attacking one or more skunks. “He was very creative and seemed to have a incredible imagination,” Pardue says. Whimsical animal imagery in both mediums points to a sense of humor, suggested as well in accounts by his contemporaries. Yet the artist was also described as quiet and was deeply involved in dances and other aspects of traditional Pueblo life. Sandfield and Pardue quote Taos art patron and socialite Mabel Dodge Luhan, who commissioned Awa Tsireh to paint a mural in her house, on his manner as he worked: “Withdrawn — absent from the struggle and turmoil of the world, he sits rapt and serene.”

Within that reserve may have lingered some grief. At age 22, Awa Tsireh married a San Ildefonso woman, but both his wife and infant son died soon after the baby was born. The artist moved back to his parents’ home and never remarried. He funneled his energy into his artwork instead.

Highly prolific, Awa Tsireh painted in a range of styles, from simple realism — often depicting dancers or Pueblo women firing or painting pottery — to stylized dancers and animals. Mystical Bird, painted between 1940 and 1950, features a colorful, complex, stylized bird design incorporating multiple symbols from Southwestern Native American iconography. Like other works from this period, it contains finely rendered decorative elements in the lower corners that appear to echo Art Deco design. While some have suggested that Awa Tsireh’s evolving painting style may have been influenced by encountering art history books in the Hendersons’ library, Pardue sees instead “an artist who, as he continues to paint, becomes more skilled and his paintings more detailed.”

What is clear is that much of early 20th-century Native art found resonance in an American appetite for Modernism. Strong colors, flattened figures on an empty background and highly stylized design elements appealed to the modernist sensibility, with the added attraction of having been created by artists perceived as “untainted” by the modern world. In their introduction to the catalogue for the 1931 Exposition of Indian Tribal Arts, John Sloan and Oliver LaFarge described this idealized vision of “the Indian artist”: “His work has a primitive directness and strength, yet at the same time it possesses sophistication and subtlety. Indian painting is at once classic and modern.”

For Awa Tsireh, his peers and the Pueblo artists who followed, the reality was perhaps more straightforward: Art was a means of conveying the world they intimately understood. “In each of the media he mastered, the San Ildefonsoan expressed through the language of his material the same deep connections to living beings and close observations of life interacting with life,” Pardue and Sandfield write. “This consistency of vision and devotion to craft brings an unusual integrity to the body of his work.” 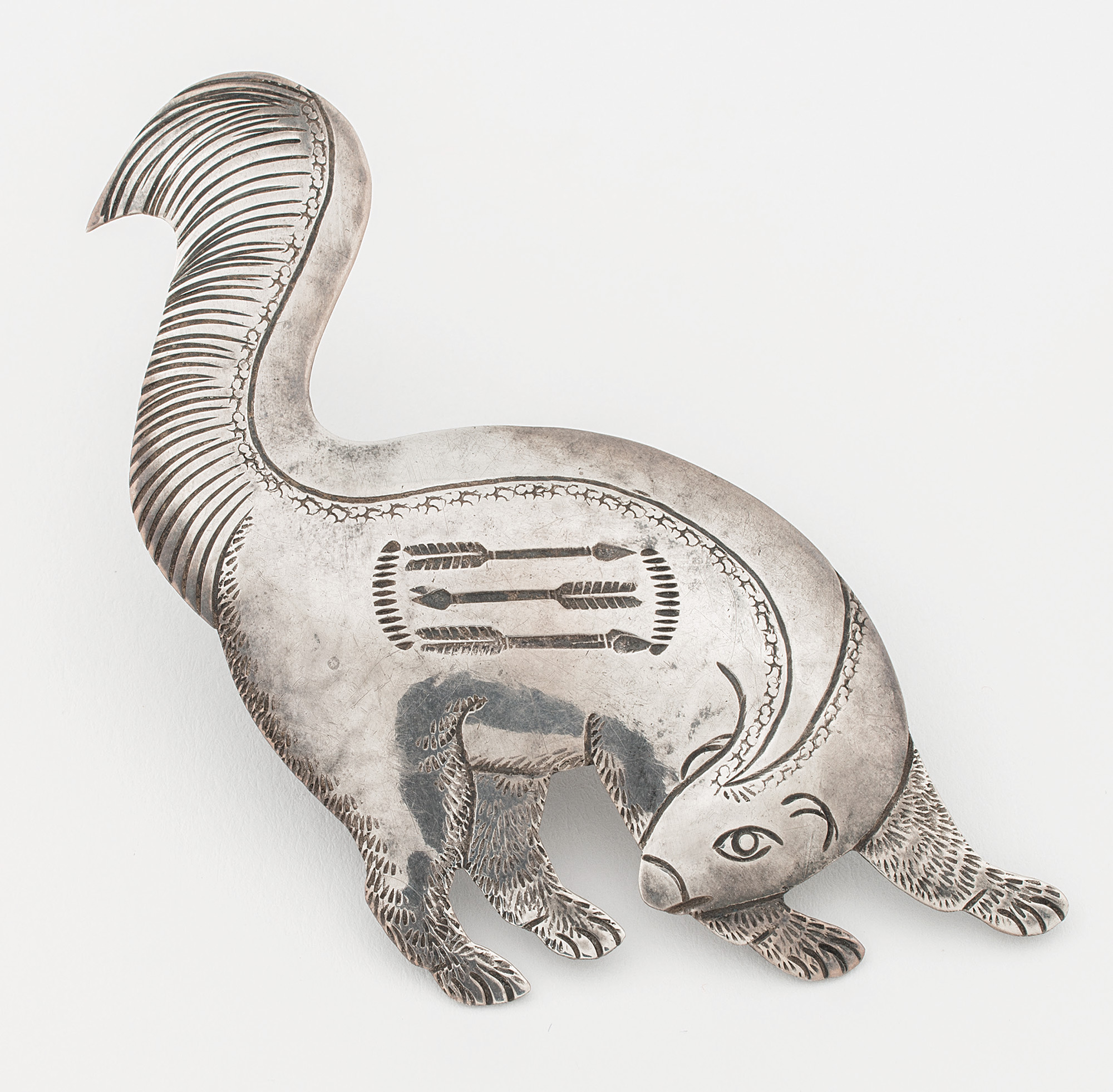 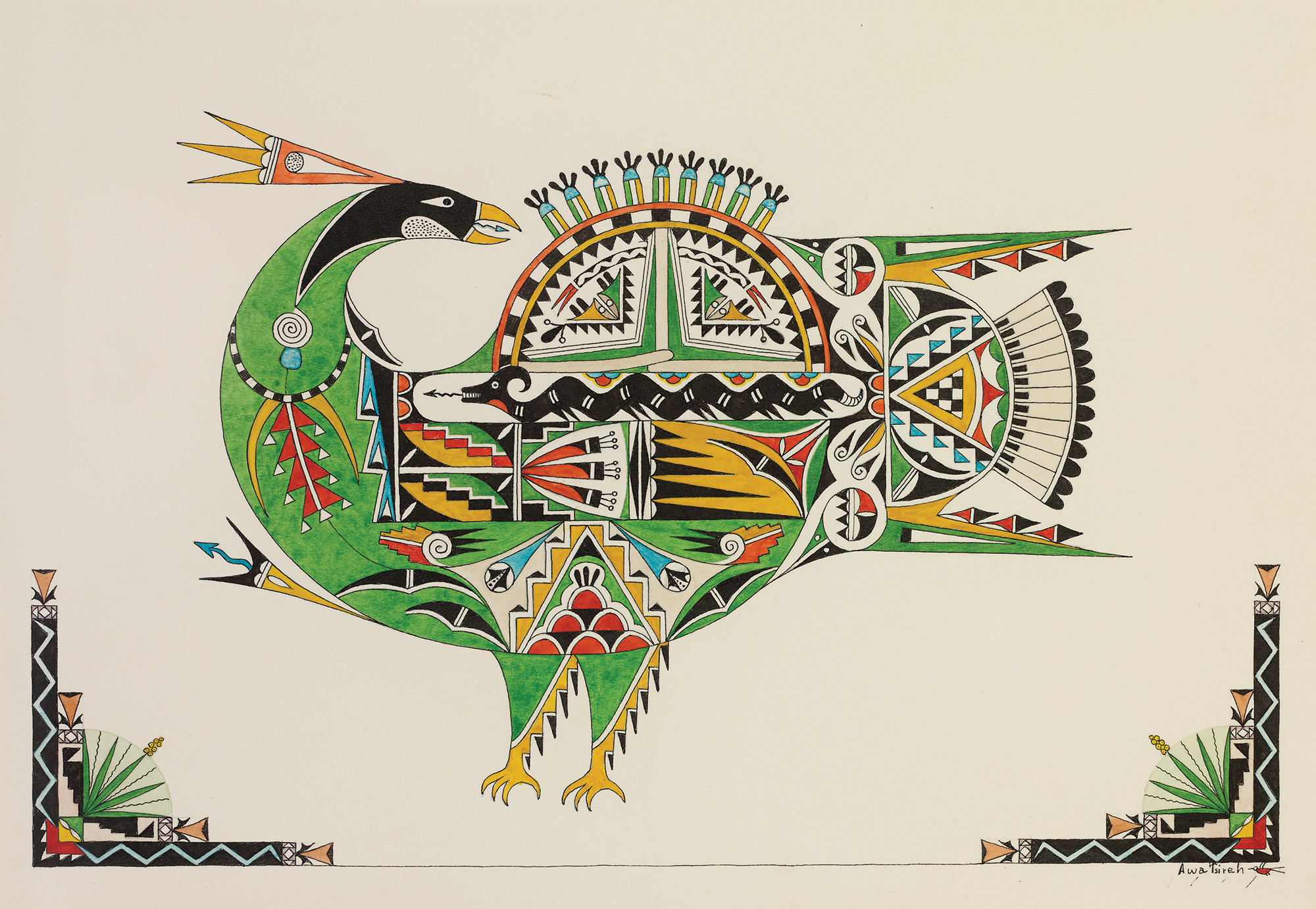 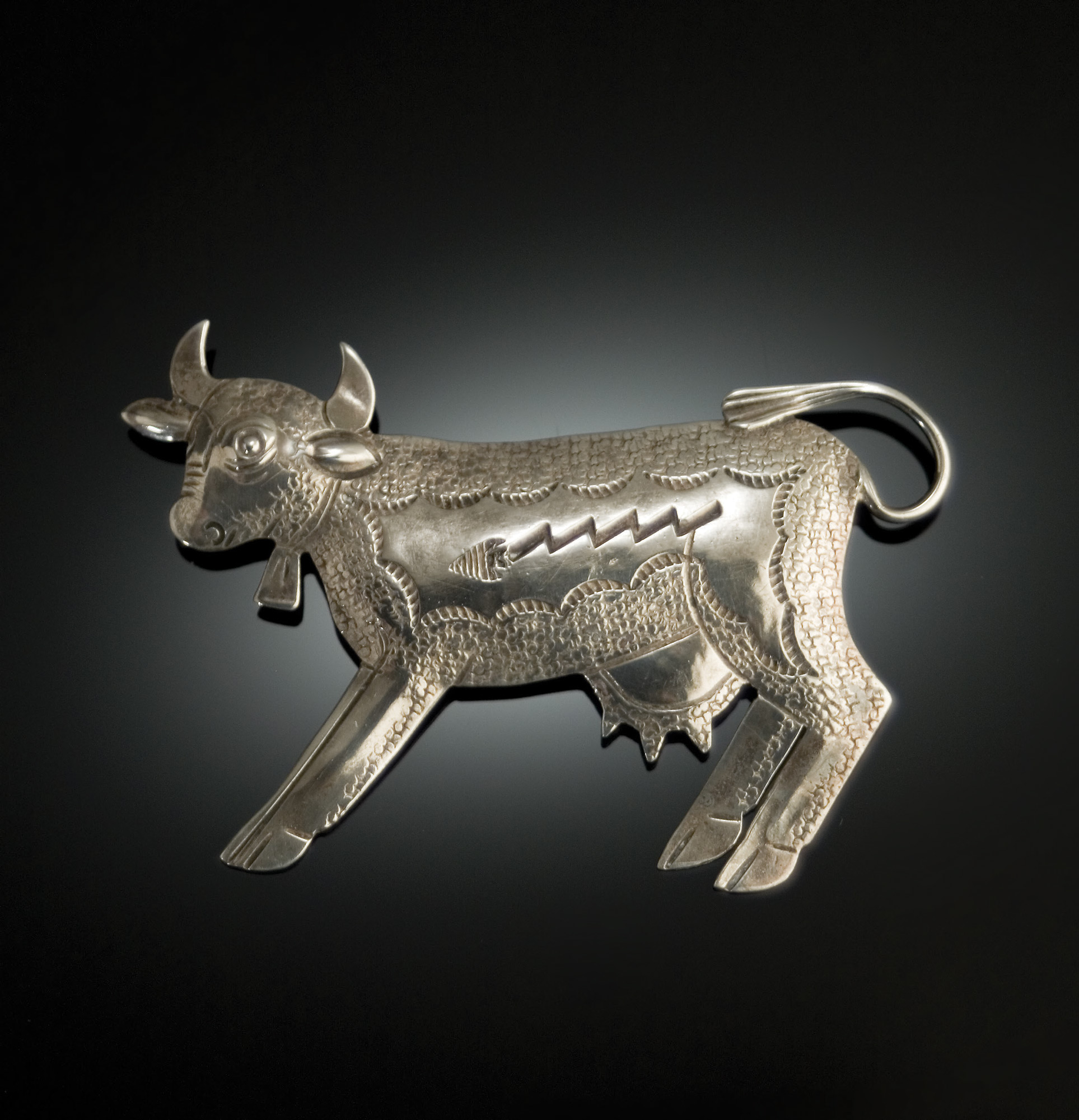 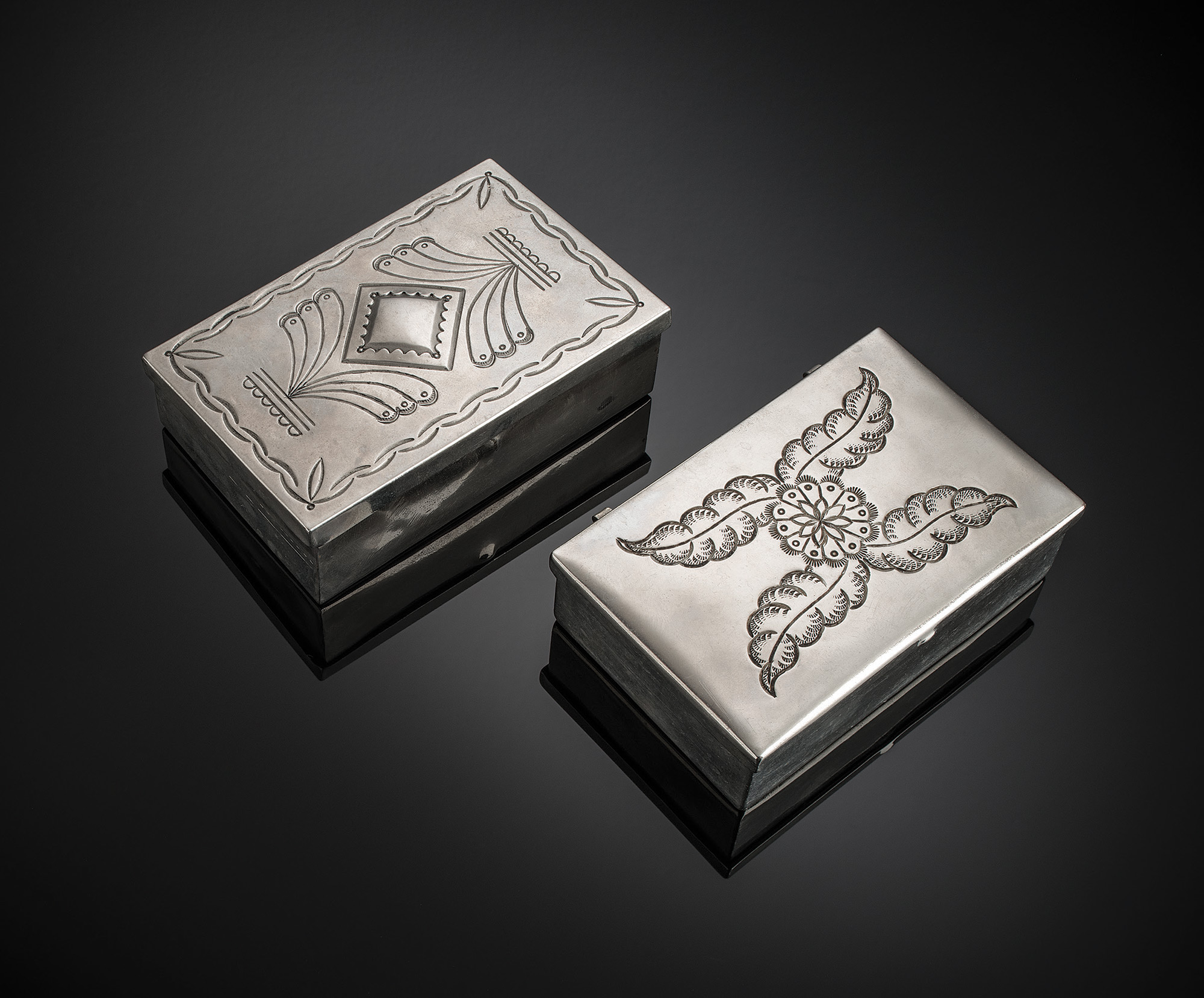 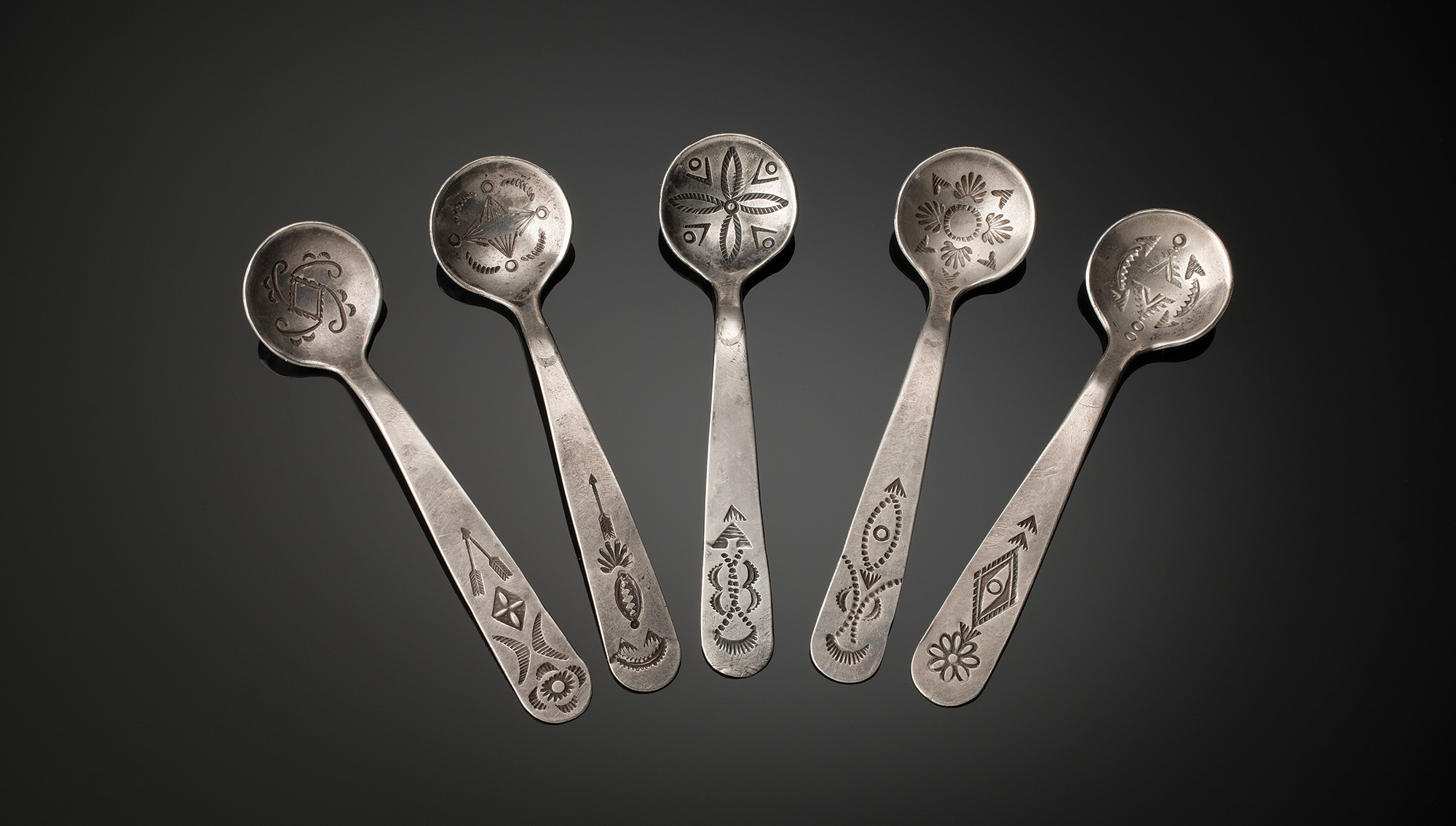 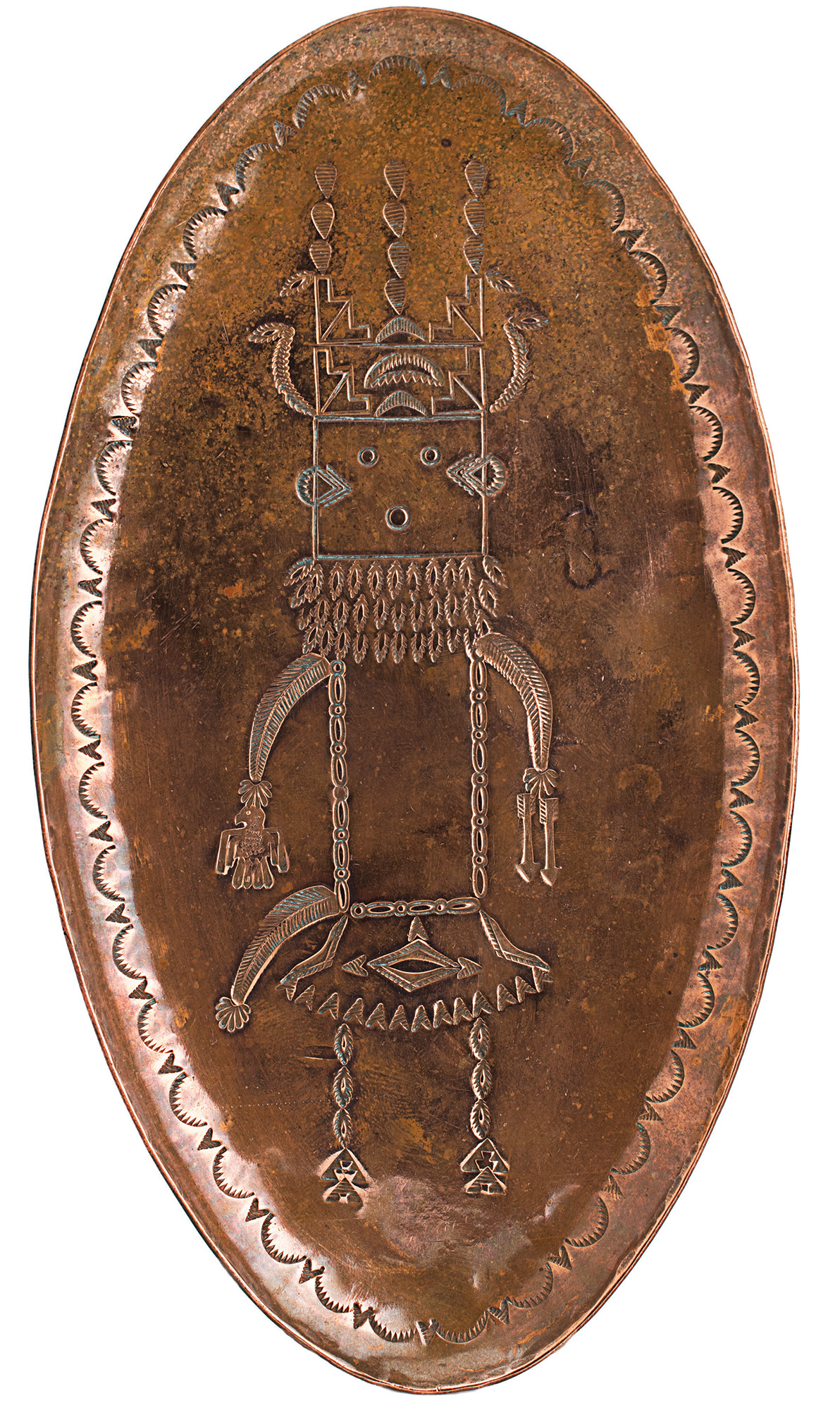 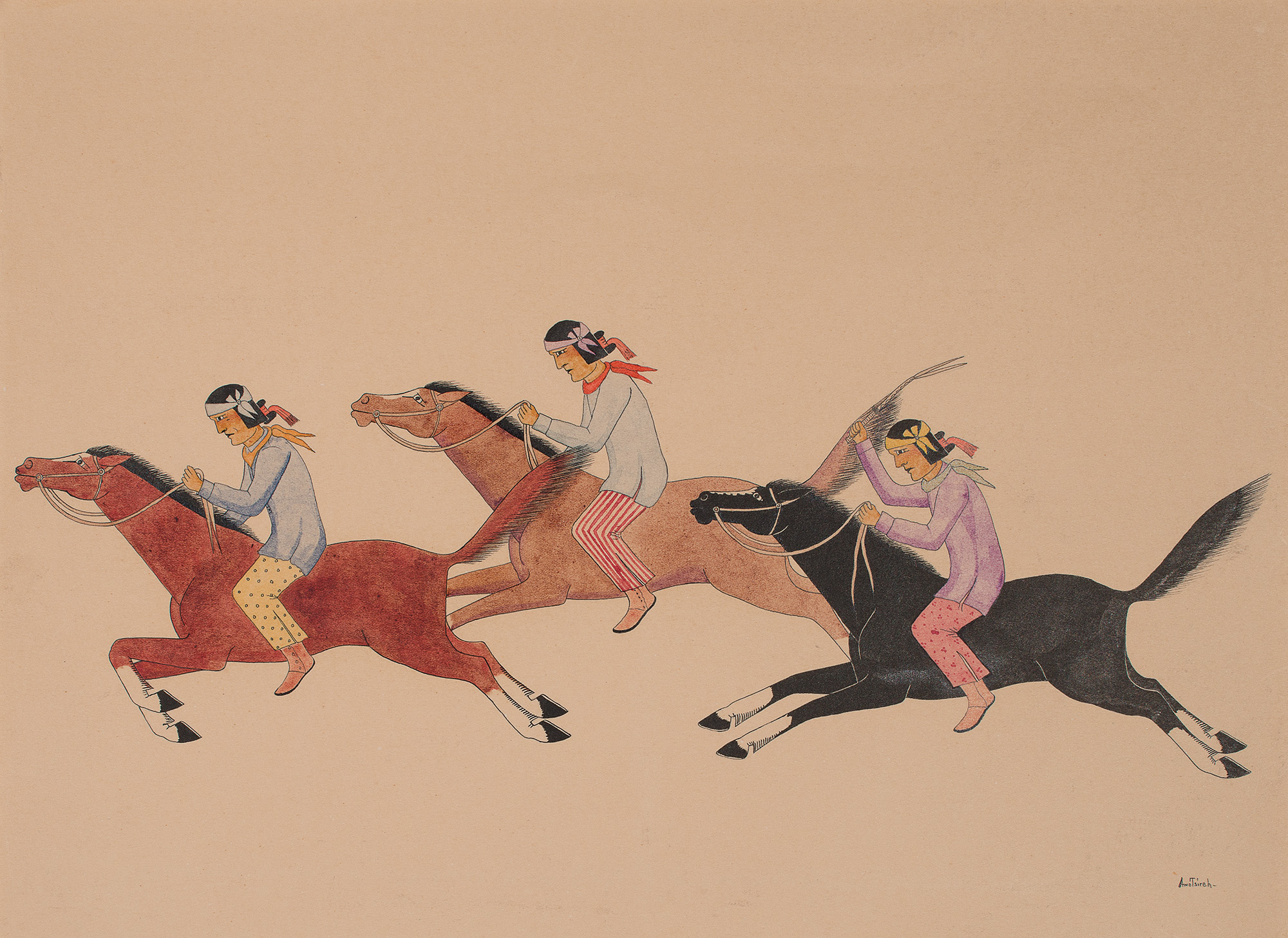 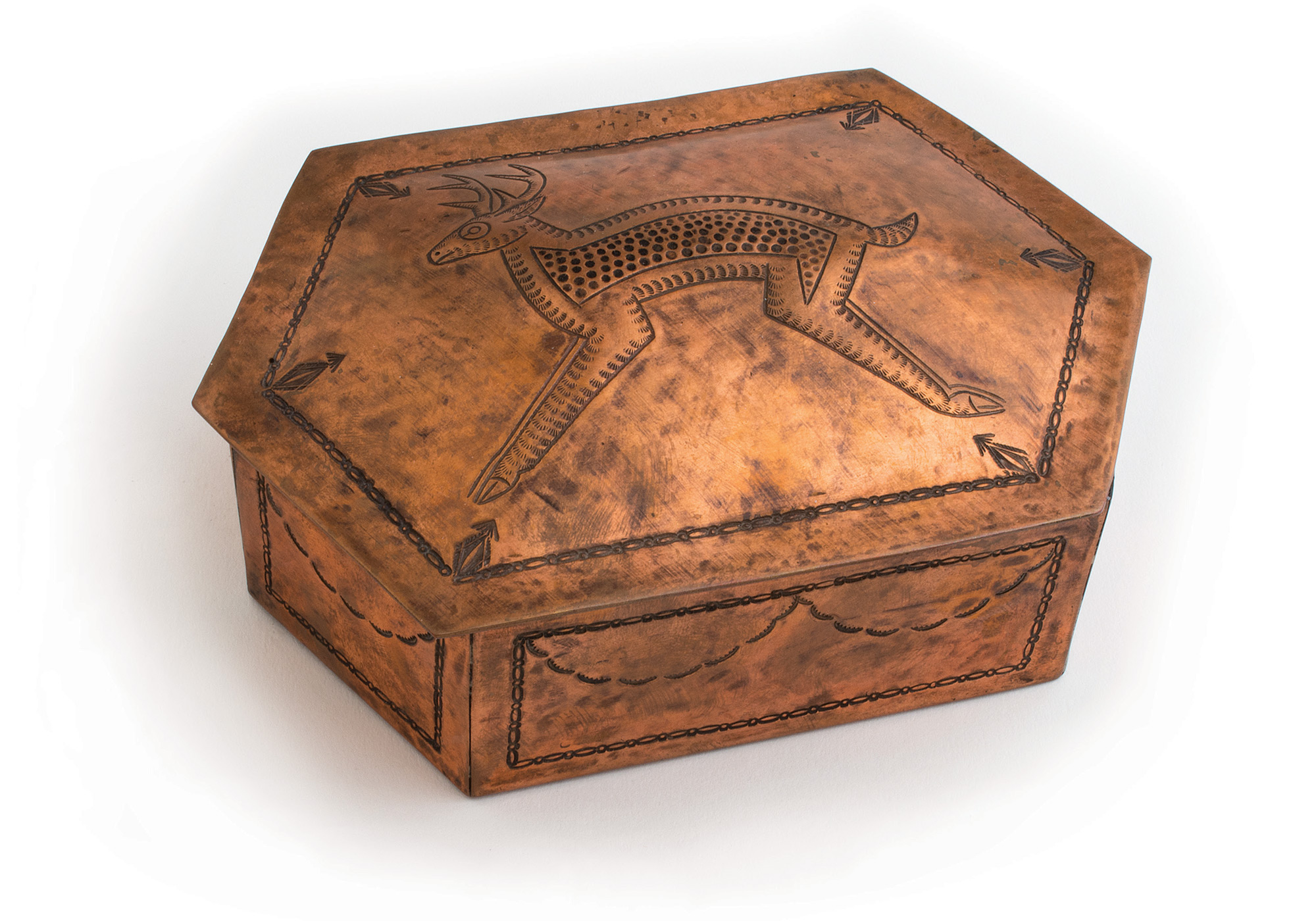 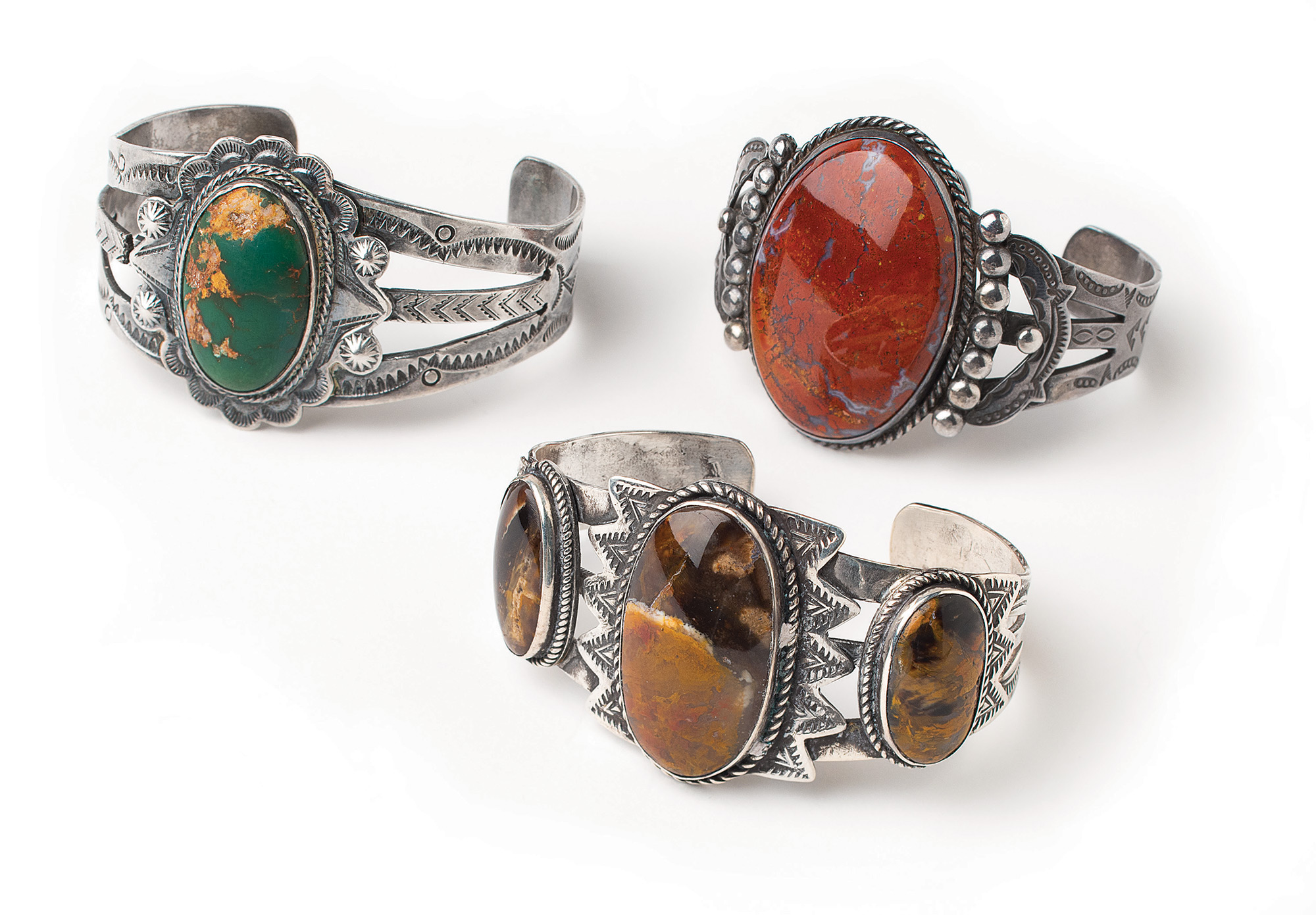 “Bracelets,” 1930s–40s, each has turquoise or agate set in a smooth bezel and a split shank 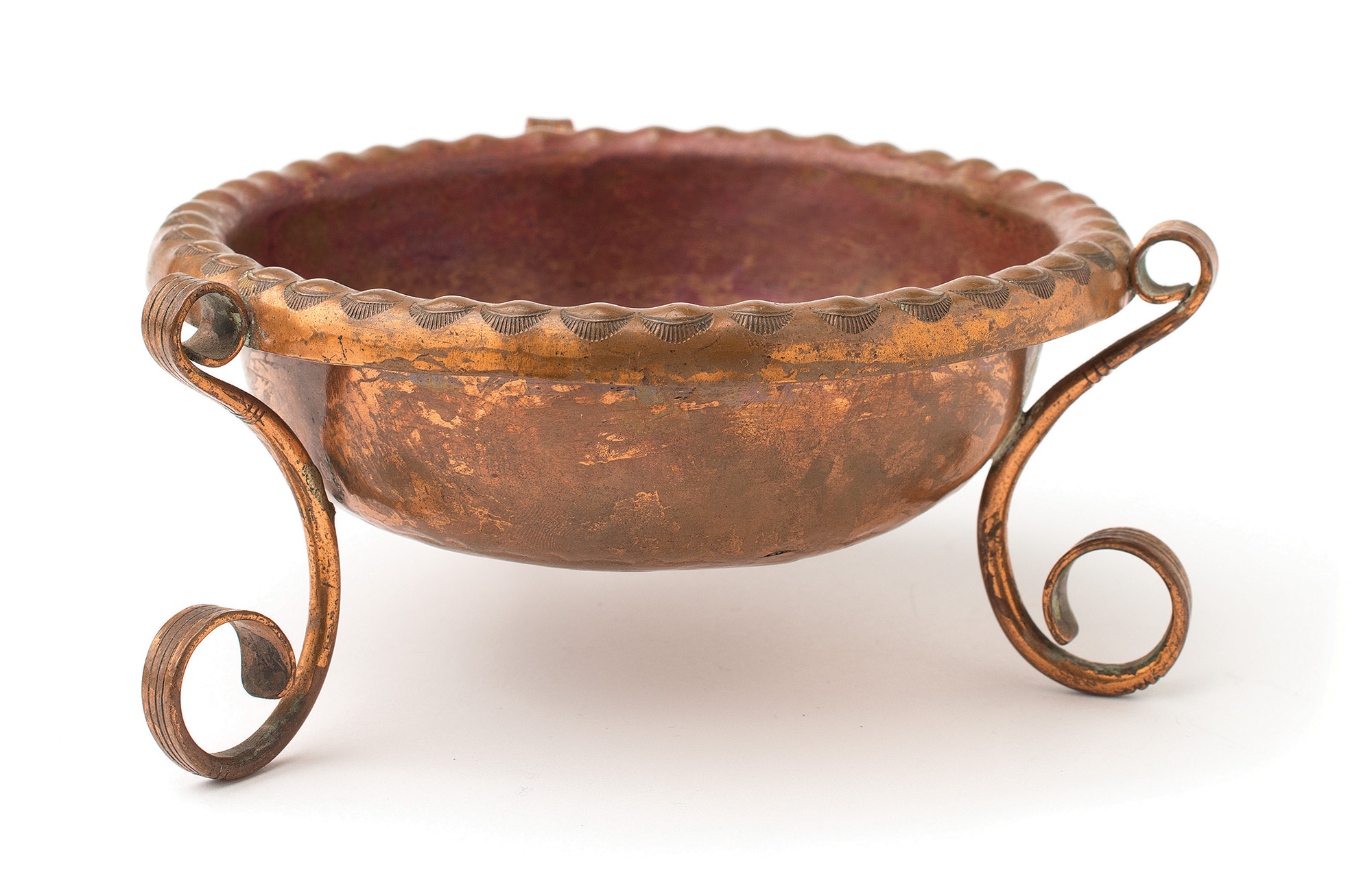 Copper bowl, 5.5 inches wide from 1930s–40s with scroll-shaped feet, a curved lip, and a stamped upper edge is decorated on the interior. Images courtesy of “Awa Tsireh: Pueblo Painter and Metalsmith” by Diana F. Pardue and Norman L. Sandfield 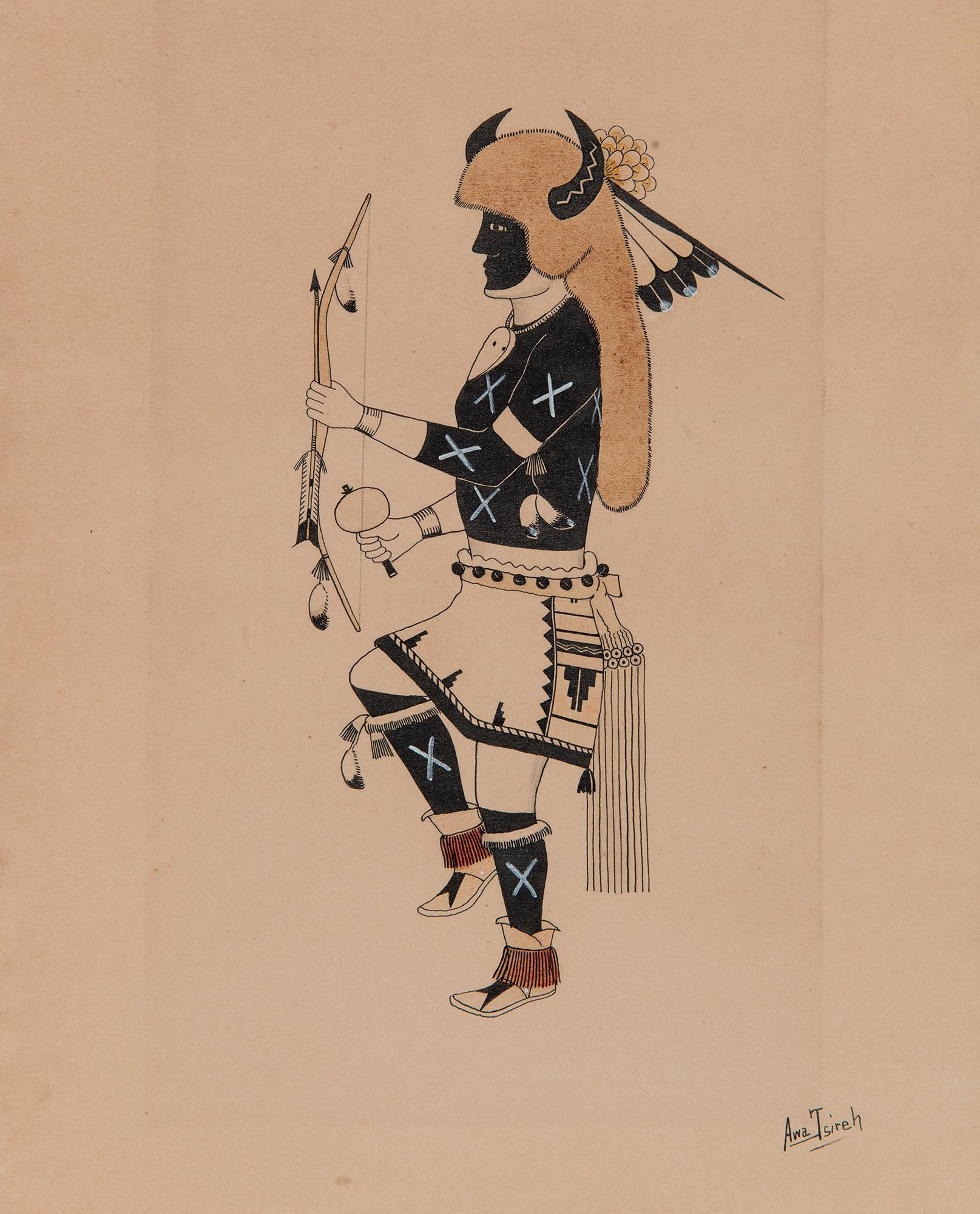 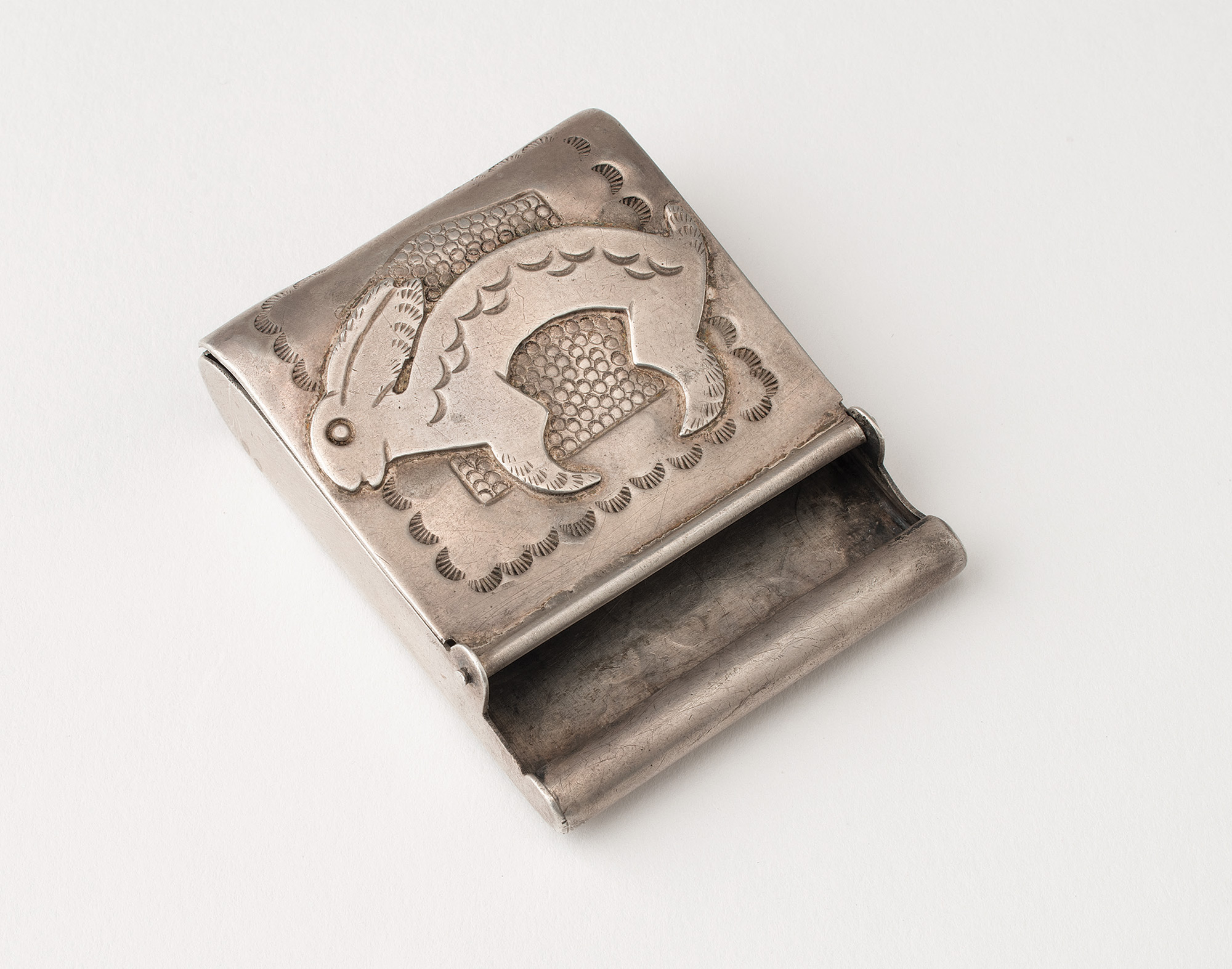 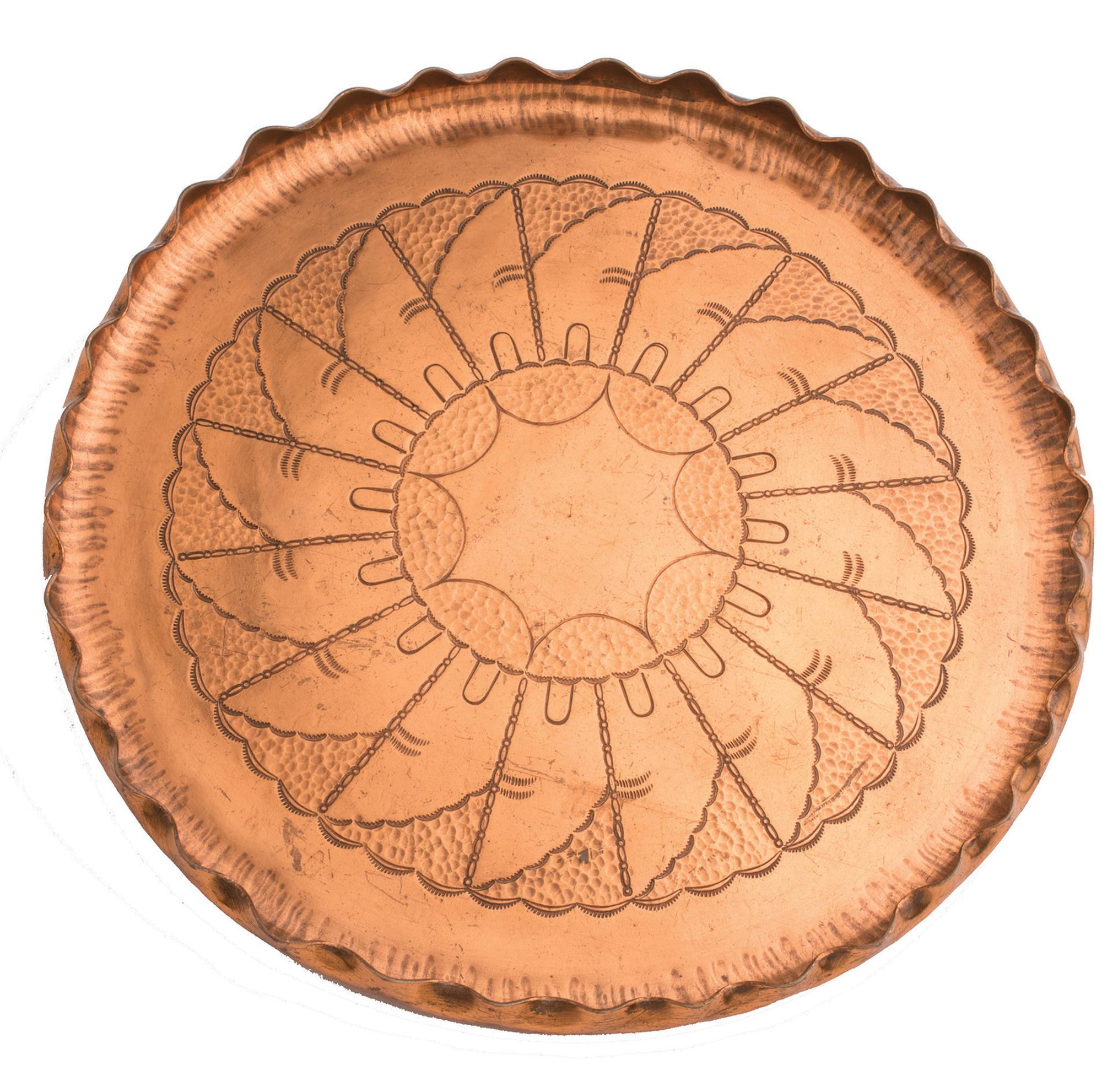 “Crimped Edge Copper Tray,” 1930s–40s, 9.25 inches | This tray has crimped edges and a design with six feathers based on a San Ildefonso pottery design used by Maria and Julian Martinez and Awa Tsireh’s sister, Santana, as well as other Martinez family members. | Image courtesy of “Awa Tsireh: Pueblo Painter and Metalsmith” by Diana F. Pardue and Norman L. Sandfield