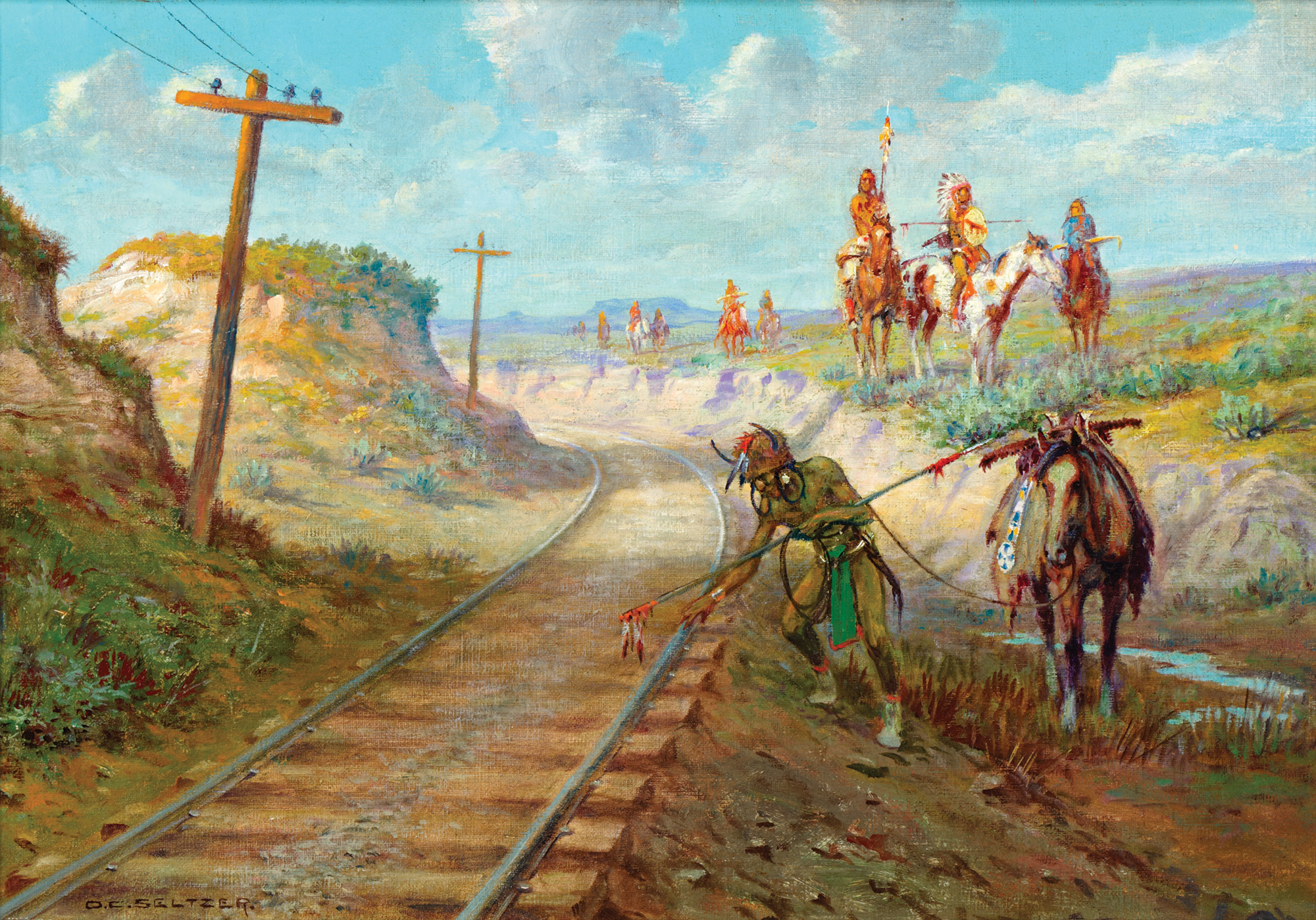 Olaf Carl Seltzer was 19 when he wandered into the Silver Dollar Saloon in Great Falls, Montana. It was in March 1897, still late winter in central Montana, and a rousing party seemed to be taking place in the saloon. Indeed, it was a lively gathering, a birthday celebration for 33-year-old Charles M. Russell. Seltzer, although much more reserved and quiet than the gregarious birthday boy, joined the party, and the two men immediately hit it off. Seltzer would later call that day one of the most important in his life.

It had not been an easy life to that point. O.C., as he later signed his paintings, spent early boyhood in his native Denmark in impoverished conditions with his mother after his father left when Olaf was quite young. When he was 12, his mother managed to scrape together the money to send her artistically inclined son to the Danish Polytechnic Institute, a preparatory school for the Royal Danish Academy of Fine Arts in Copenhagen. There he gained the foundations of a formal art education, studying for two years before his schooling was cut short. When Olaf was 14, his mother and aunt determined to sail to America to join his uncle who was working for the railroad in Montana.

Once in Great Falls, young Seltzer fell in love with Montana’s mountains and rivers, its open spaces and skies. He sketched and drew whenever he could. Needing to bring in money to support himself and his ailing mother, at 15 he took a series of short-lived jobs with horse outfitters, including the Yellowstone Park Stage Line. But the work was seasonal and didn’t pay well.

“He tried the cowboy thing for about a year, but he just wasn’t a cowboy,” says his grandson, Steve Seltzer, also an artist and lifelong resident of Great Falls. What O.C. Seltzer had instead was a precise and accurate hand, strong draftsmanship and a self-disciplined nature. These qualities served him well when, at 16, he became an apprentice machinist in the Great Northern Railway’s locomotive shops near Great Falls. He soon became a locomotive repairman and before long, a foreman. He learned English, but as his grandson speculates, the early language barrier probably contributed to his reticent manner, which contrasted strongly with that of the renowned Montana artist whose friendship Seltzer ultimately enjoyed for more than 25 years.

The meeting between Seltzer and Russell came at an opportune time in the younger artist’s life. He was beginning to paint in oils and needed encouragement and confidence as he developed his skills. Russell became a mentor of sorts, especially early on in their friendship, sharing tips on materials and techniques. Just as important, the two men shared a vision of how the quickly vanishing Old West could be portrayed and preserved through art. Although Seltzer’s most important years as a painter fell in the 20th century, his glimpses of earlier ways of Western life combined with scrupulous research — including many conversations with men who had lived that life — to produce a high level of accuracy in his work.

“Even though he was a little younger, he was still painting the West when it was the Old West,” says Mike Overby, auction partner with the Coeur d’Alene Art Auction. “He actually lived it, as opposed to later artists.”

Seltzer experienced Montana’s wilderness through camping trips with Russell and other friends, observing wildlife, sketching together and telling stories around the campfire. He and Russell frequently sketched and painted together at Bull Head Lodge, Russell’s cabin on Lake McDonald in what became Glacier National Park. Seltzer also visited and sketched the Blackfeet and other Native tribes and conveyed a sense of their place in the changing West. “He learned his craft quickly,” Steve Seltzer says. “He came on fast, and even in 1901 and ’02 he was starting to sell his paintings.”

In 1903, Seltzer married Mabel L. Cleeland, with whom he raised two sons. For the next 18 years he sketched and painted in watercolor and oils whenever possible as he continued to work for the railroad, sometimes traveling around Montana and up into the Northwest and Canada for work.

In 1921, when post-World War I economic conditions resulted in another in a series of periodic railroad layoffs, Seltzer left Great Northern for good and began to concentrate on painting full time. Then, in the early spring of 1926, he met the second individual who would have significant impact on his artistic career. This time it was a Montana-born physician named Philip Gillette Cole. The two met at a mutual friend’s home in Helena, beginning a patronage relationship that lasted until Dr. Cole’s death in 1941. For Cole, the association helped eventually produce one of the largest private collections of Western art of the time, filling his Tarrytown, New York, home with paintings that reflected his interest in history and recalled his beloved home state.

For Seltzer, Cole’s patronage resulted in a prolific output with virtually ensured sales; the physician purchased 70 to 80 percent of his paintings during a period of about eight years at the height of their collaboration. Among these are some of the artist’s most admired works — commissioned oils and watercolors documenting and celebrating Montana history, Old West characters and early modes of transport in the West. Seltzer’s Montana in Miniature series contains more than 100 small-format (about 4- by 6-inch) oils.

Writing in a 2010 issue of Gilcrease: The Journal of Gilcrease Museum, former Gilcrease Associate Curator of Art Carole Klein describes these works as a pictorial history of Montana from early exploration to early statehood. “He left a trail back through time in these tiny paintings with their surfaces of faceted color,” Klein writes. Overby, who has handled Seltzer’s work at auction and as a private dealer for more than 20 years, sees the miniatures as some of his strongest work. “I absolutely love some of his smaller paintings,” he says. “He could pack a lot of detail into a very small scale.”

Seltzer’s Western Characters series, also commissioned by Cole, features almost 80 medium-scale watercolor images of such iconic figures as the stage driver, cowboy, wagon boss, barmaid, trapper and an Indian woman with a blanket-wrapped baby on her back. For a year and a half beginning in 1926, the painter lived in Tarrytown, New York, to work more closely with Cole. Yet while patronage provided the artist with a degree of financial security, it was a mixed blessing. With many of his paintings hidden away in a private collection, fewer were available for the public to view and purchase during his most productive years.

Following Cole’s death, the physician’s widow offered to sell his collection — which also included works by Russell and Frederic Remington — to the State of Montana, but the legislature was unable to come up with the funds. A few years later, in the mid-1940s, wealthy Oklahoma oilman and art collector Thomas Gilcrease purchased Cole’s entire collection. Today the Gilcrease Museum in Tulsa holds the largest single collection of work by Seltzer. The C.M. Russell Museum in Great Falls has the second-largest holding, while other Seltzer paintings are in the permanent collections of such institutions as the National Museum of Wildlife Art.

Seltzer’s close association with Russell was also a double-sided coin. The work of the two artists is frequently compared, with Seltzer overshadowed by one of the brightest stars of Western art. Seltzer himself did not think in terms of competition with Russell, and freely acknowledged the older artist’s impact on his life and art, his grandson says. Still, Russell’s wife, Nancy, known as a strong promotional force for her husband’s work, displayed jealousy at the two artists’ friendship and increasingly attempted to place a wedge between them.

Responding to critics who have described Seltzer as a Russell “copyist,” Steve Seltzer says, “It’s true that Grandpa learned a lot from Russell and they painted a lot of the same subject matter, but that’s what painting the West was all about.”

Others in the art world point to Seltzer’s qualities of meticulousness and self-discipline, which allowed him to excel both as a machinist and as a painter. “His work is characterized as linear with careful detail, and the strength of his draftsmanship was admired by Russell himself,” writes Gilcrease curator Carole Klein. Steve Seltzer adds that Russell took note of Olaf’s strong color sense and also considered Seltzer “one of the best watercolorists he had ever seen, especially on a small scale.” While Russell is famed for the action in his imagery, Seltzer was drawn to a more observational, less dramatic approach.

“His favorite subject was Indians at a waterhole,” Steve Seltzer says. “It was an opportunity to paint reflections and a quiet scene. I’m looking at one I have here — it’s beautiful. He really captured the tranquility of a sunset scene.”

Despite comparisons, Overby points out that collectors long have appreciated Seltzer’s art on its own terms. “His work is still highly sought after. He’s one of the few early Montana artists who particularly embody the spirit of the early West.” 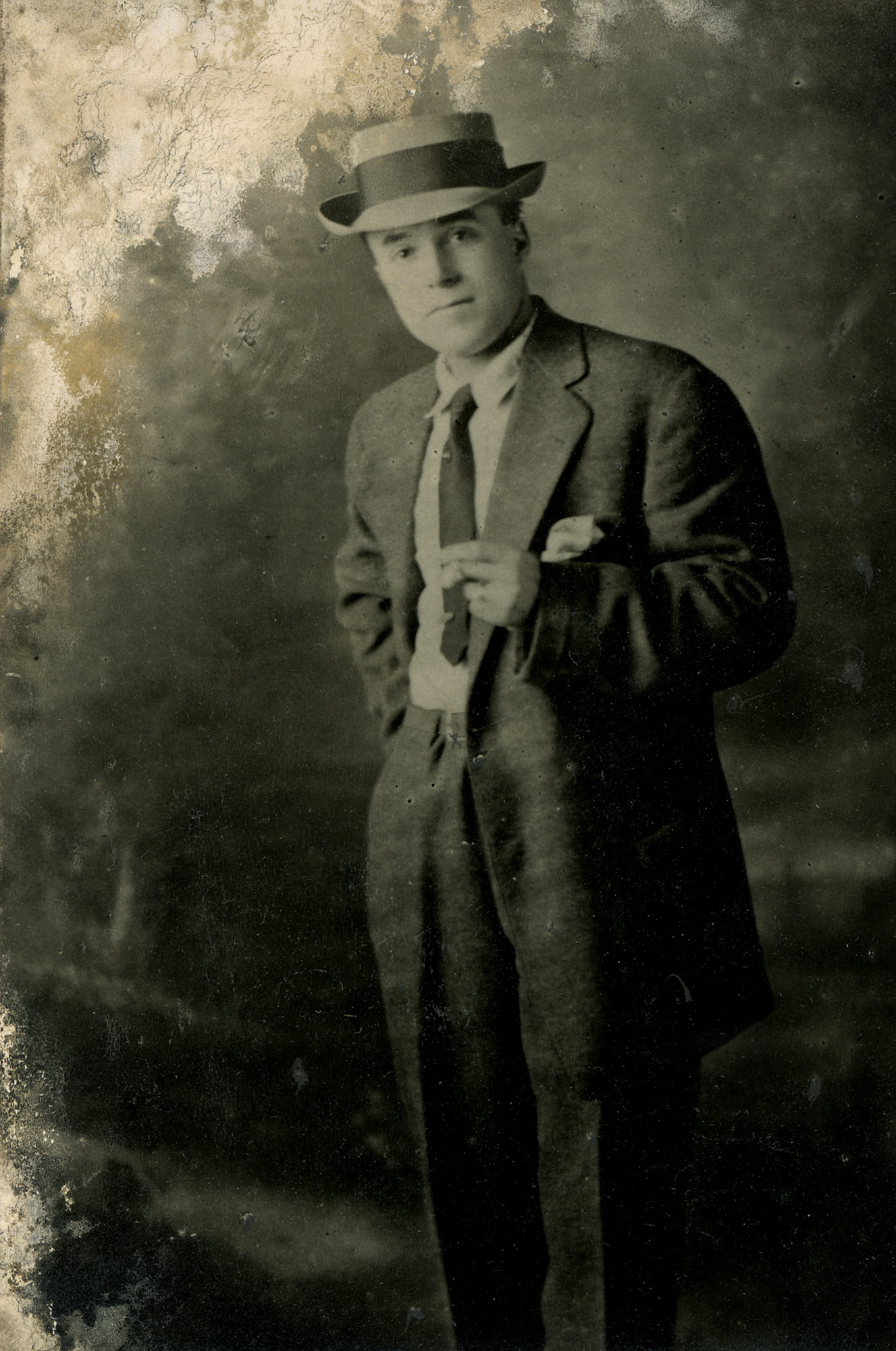 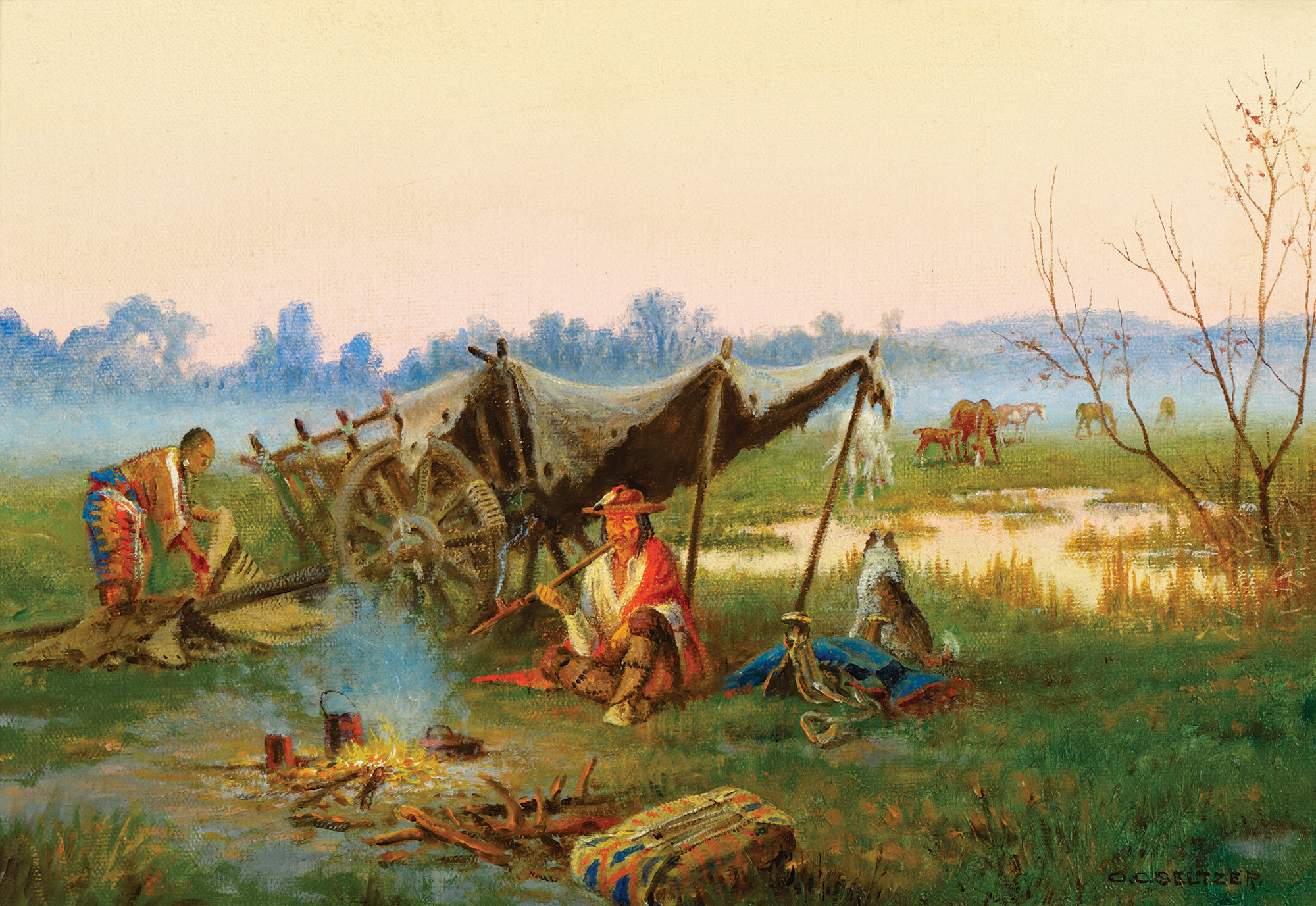 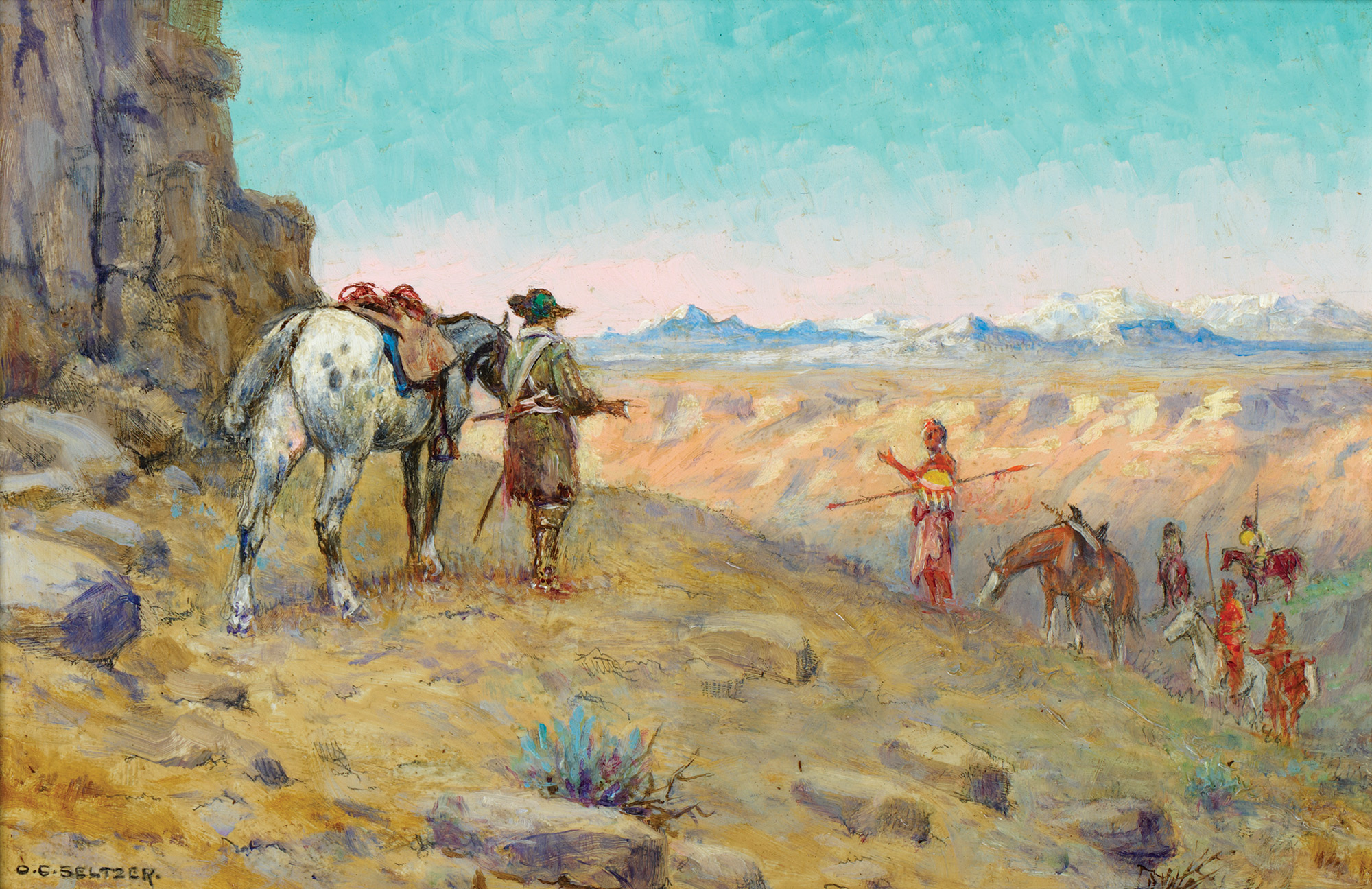 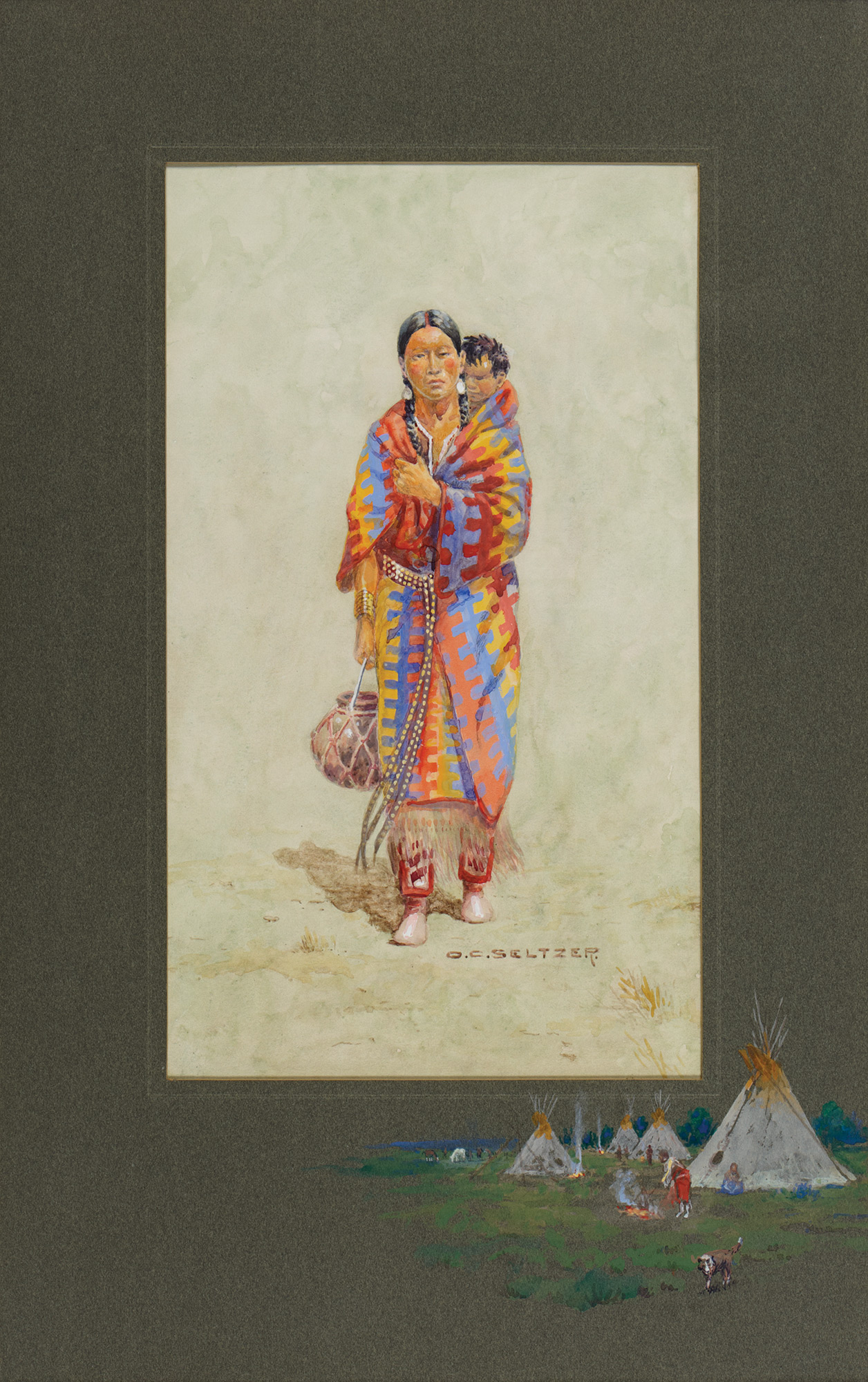