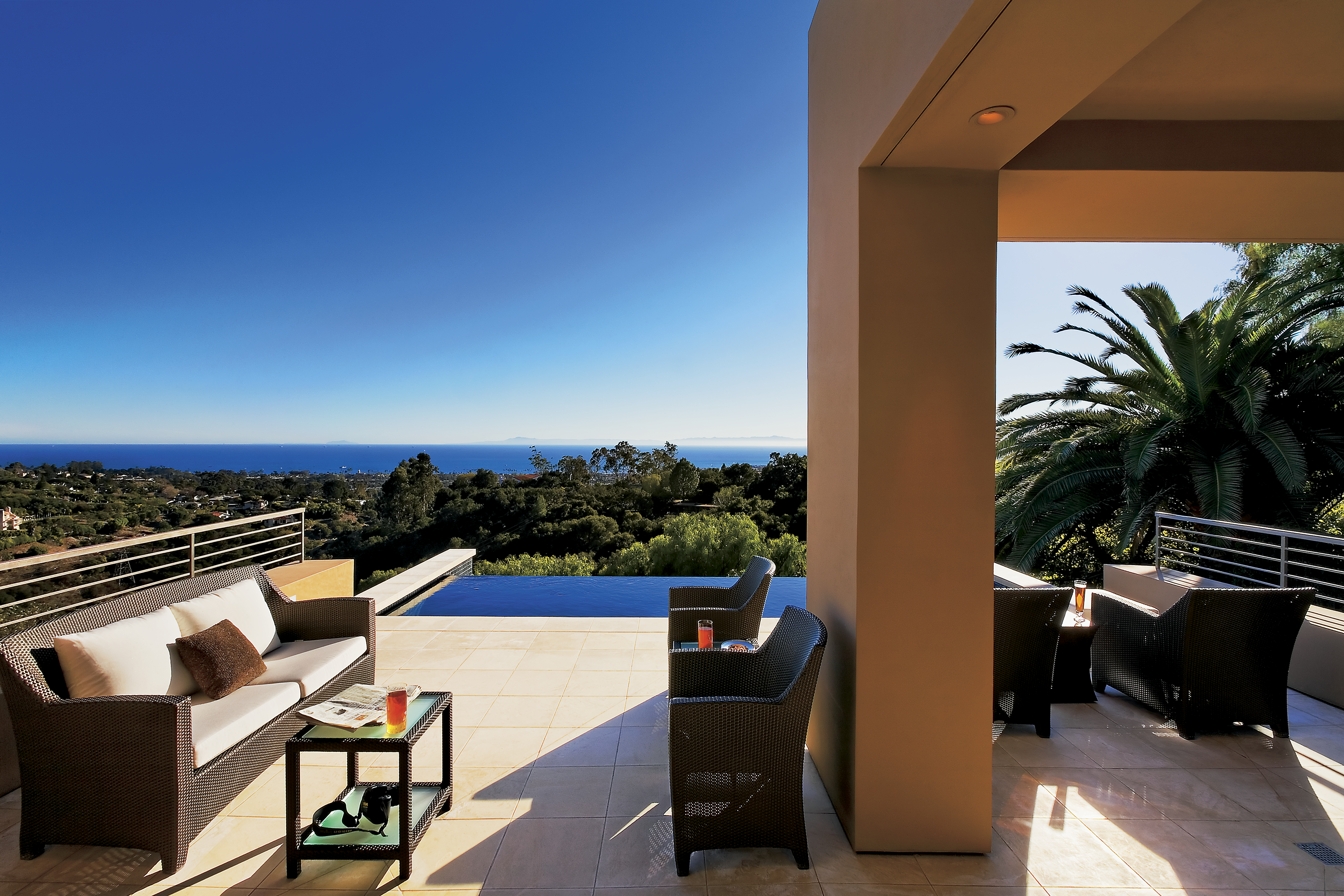 24 Jul Rendering: A Matter of Perception

In the foothills of the Santa Ynez Mountains, where rocks, oaks and chaparral weave a resilient, captivating beauty, a long ridge known as The Riviera overlooks Santa Barbara. Here, on a Riviera slope, with 270-degree views of the mountains, Pacific Ocean and Channel Islands, a glass and limestone house is quietly defying probability.

Towering columns alternate with openings of glass and solid walls, giving the house an elegant, buoyant facade that just crosses over into grand. Inside everything changes though, as the small entryway opens into a living room wrapped in glass. Then, as if that wasn’t enough beauty to absorb, the living room flows out to a deck for even more startling views and an infinity-edge pool that seems to be offering the ocean up on a platter. The result is a sense of being perched, literally, on top of the world.

From the sensual, expansive design to the number and types of rooms accommodated, to the half-dozen environmental systems put in, this modest-sized, 3,200 square foot home is a testament to the ingenuity, talent and collaborative skills of the Culver City and Santa Barbara-based architectural firm Shubin + Donaldson.

What separates Robin Donaldson and Russell Shubin from the pack is partly an attitude that predisposes them to question assumptions. Rather than applying a certain style to a problem, and letting that be the solution, their attitude is, “Look, there are some questions here that need to be clarified and answered to get to what is the appropriate architectural response to any given project,” said Donaldson.

And so they’re good at listening, too, at helping clients clarify their goals. As building gets underway, according to Shubin, they will go back and ask themselves, ‘What are we doing here?’ They refuse to be distracted by program, by matters of closet space and half-baths.

“We try to ‘unconceal’ what’s behind what the client is saying and then [from that] discover a lever for one of the tenants of the design.”

For two decades, Shubin and Donaldson, both Southern California natives, have been exploring, and often pushing, the boundaries of modern architecture. They began building residences together in 1990 and have in that time accumulated a body of work that is diverse, original and quite often dazzling. The trajectory of their careers took a decidedly upward turn in 1998, when they were commissioned to convert a Santa Monica warehouse into a voluminous office for the up-and-coming video production company, Fuel. With a tiny budget and only 10 weeks to deliver, the architects threw caution out the window. Collaborating with Fuel’s director Seth Epstein, they came up with a creative process that tapped the essence of the company’s animation, video and motion-graphics work: immediacy, layering and movement. With computer generated video clips, the architects cultivated early images for the design. Then, in the tradition of Donaldson’s architectural hero Frank O. Gehry, they broke a ton of rules. With its exposed air-ducts and wiring, upturned trusses, canister lighting and transparent panels, the space had attitude and edge and immediately scored them two other warehouse conversions. One of them, for the ad agency Ground Zero, garnered two A.I.A. awards and a Business Week-Architectural Record award.

In 2002, when Epstein and his wife decided to build a home in Malibu, and wanted the look and feel of an urban spa, every decision going forward was made through that filter. Although Donaldson doesn’t admit to their having a signature style, Epstein definitely sees one. “It’s the way volumes are put together, they’re light, and the way the interior and exterior relate.”

Though the owners of the Riviera residence had a specific floor plan in mind, Donaldson, who spearheads most of the Santa Barbara projects, leaving Shubin to take the lead in Los Angeles, brought their layout to three-dimensional life. In every room, enormous windows frame at least one view. Each is deliberately selected to integrate the mountains, valleys and ocean with the calm ivory tones inside. Using light, modulating it, bouncing it off walls and ceilings, is a Shubin + Donaldson specialty. And in the Riviera house, sun and sky are tapped ubiquitously; a narrow opening sliced down the length of the front door, for example; a two-story glass opening that parallels the chimney allows the green leaves of a ginkgo tree to be visible. The house is warmed by dark walnut floors, bookshelves and the use of limestone to integrate an exterior element.

“Living in this house is like living in a piece of art,” said Genie Gable, an interior designer, who owns the house with her husband, writer Geoffrey Moore. “I feel as if I’m just taking care of it for the next person.”

They work in different cities, but Shubin and Donaldson are two pieces of a finely polished puzzle, the synergy of yin and yang. Donaldson is the quieter one. He doesn’t mind the silent observing of a site and would rather be in the studio, designing. Shubin is more high-energy and spontaneous, but finds the earliest stages of projects, when ideas and context are explored, thrilling. As Epstein put it, “They’re serious about what they do, not serious people.” It was fine art that brought each of them to architecture. Donaldson, with a BA in studio art and art history from University of California, Santa Barbara, and a masters in architecture from UCLA’s SCI-Arc, still follows and finds inspiration in the modern art world: Olafur Eliason and Anselm Kiefer inspire him, in particular. Shubin studied at Cal Polytechnic University and at the L’Ecole d’Art at d’Architecture in France.

After years of building residences with an eye for timelessness, with massive facades that open into rooms of great height and volume, Donaldson said he and his partner are ready to move on. Perhaps in the direction of more temporary houses. Sometimes, people only need a building for a year or two, he said.

“I think where we’re heading is [toward] much more open designs.” Right now, he’s exploring this direction in an addition he’s building on his own home — much like Gehry did in the late 1970s.

“Basically, it has a lot to do with a kind of a building methodology that involves glass, layering and perception; the difference between being in a building looking out from being on the outside looking in,” said Donaldson. “It’s hard to explain. You’ll just have to stay tuned.”

Editor’s Note: A Shubin + Donaldson monograph, Live + Work: Modern Homes and Offices/The Southern California Architecture of Shubin + Donaldson, was published in early 2010 and is available for purchase at Barnes & Noble and online at www.amazon.com.

Isabelle T. Walker is a freelance writer based in Santa Barbara. She is the author of the recently launched Santa Barbara Homeless Blog: www.homelessinsb.org. 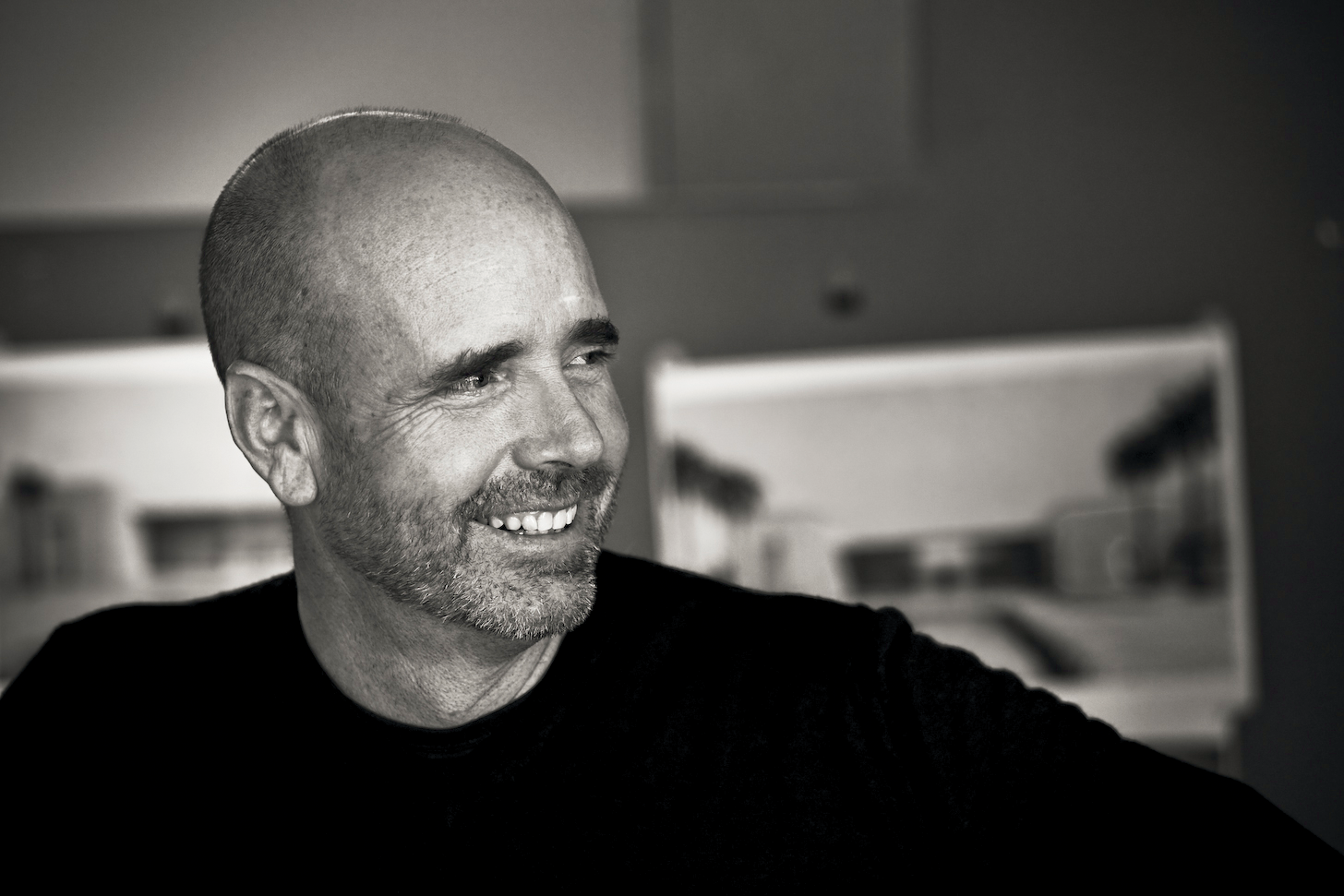 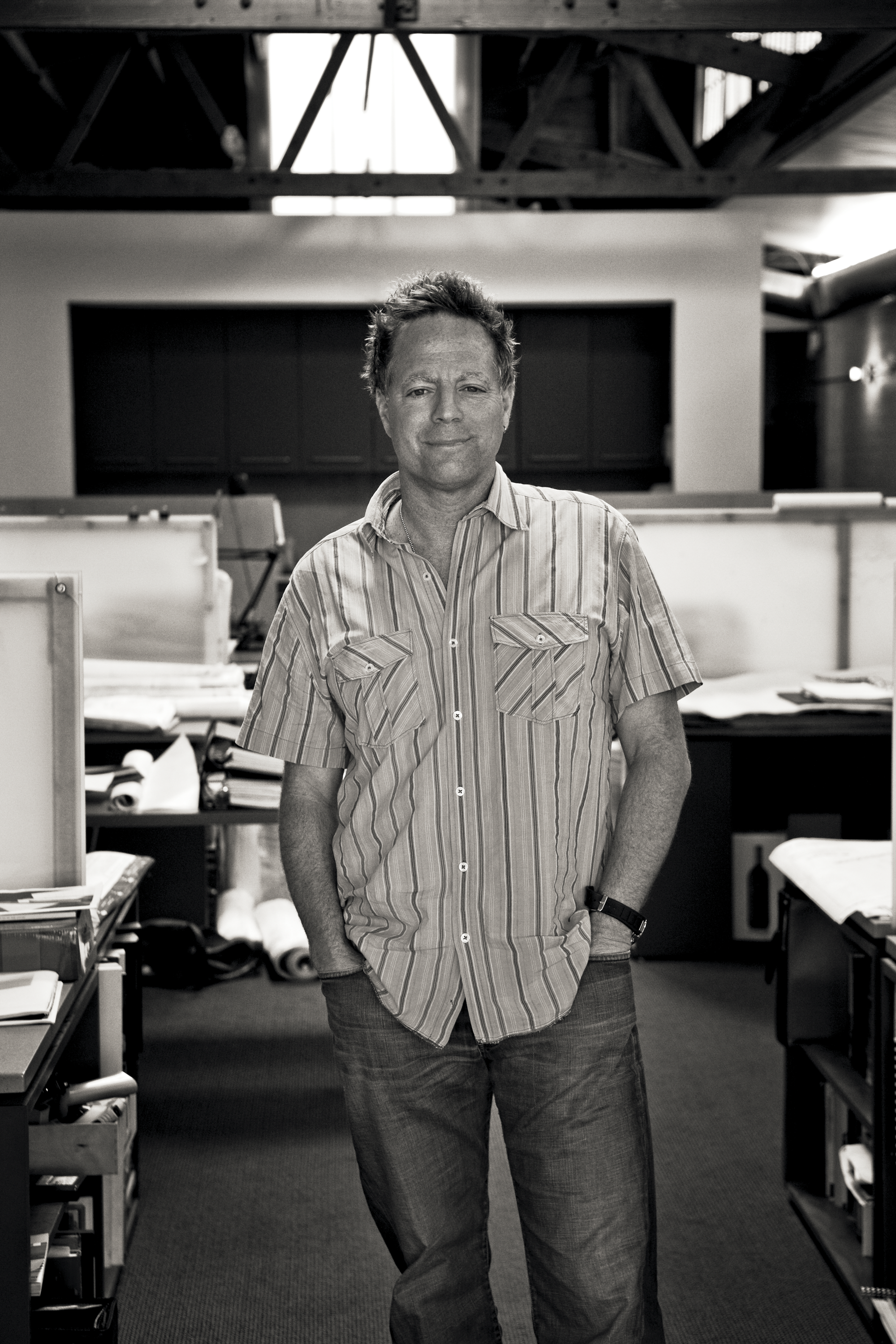 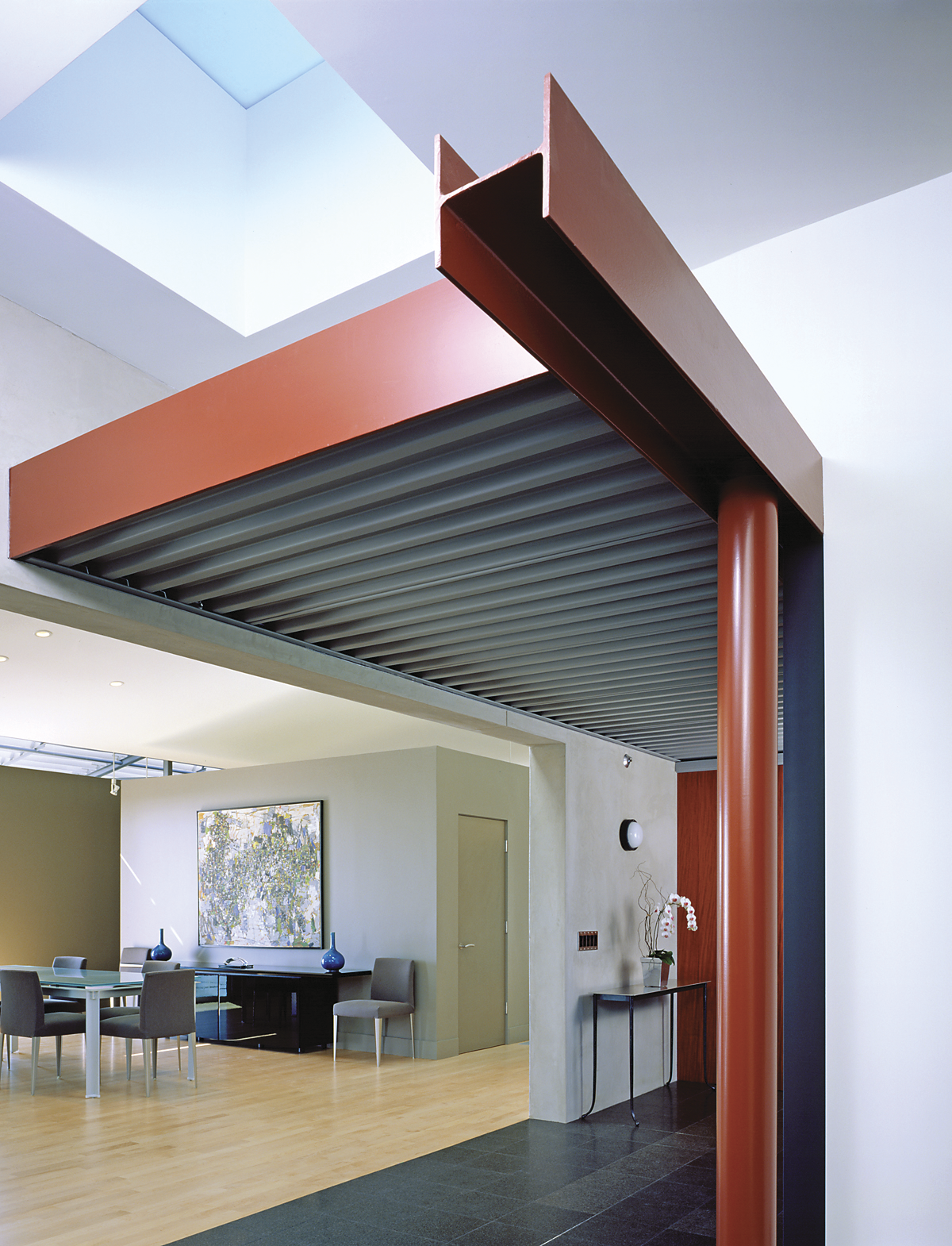 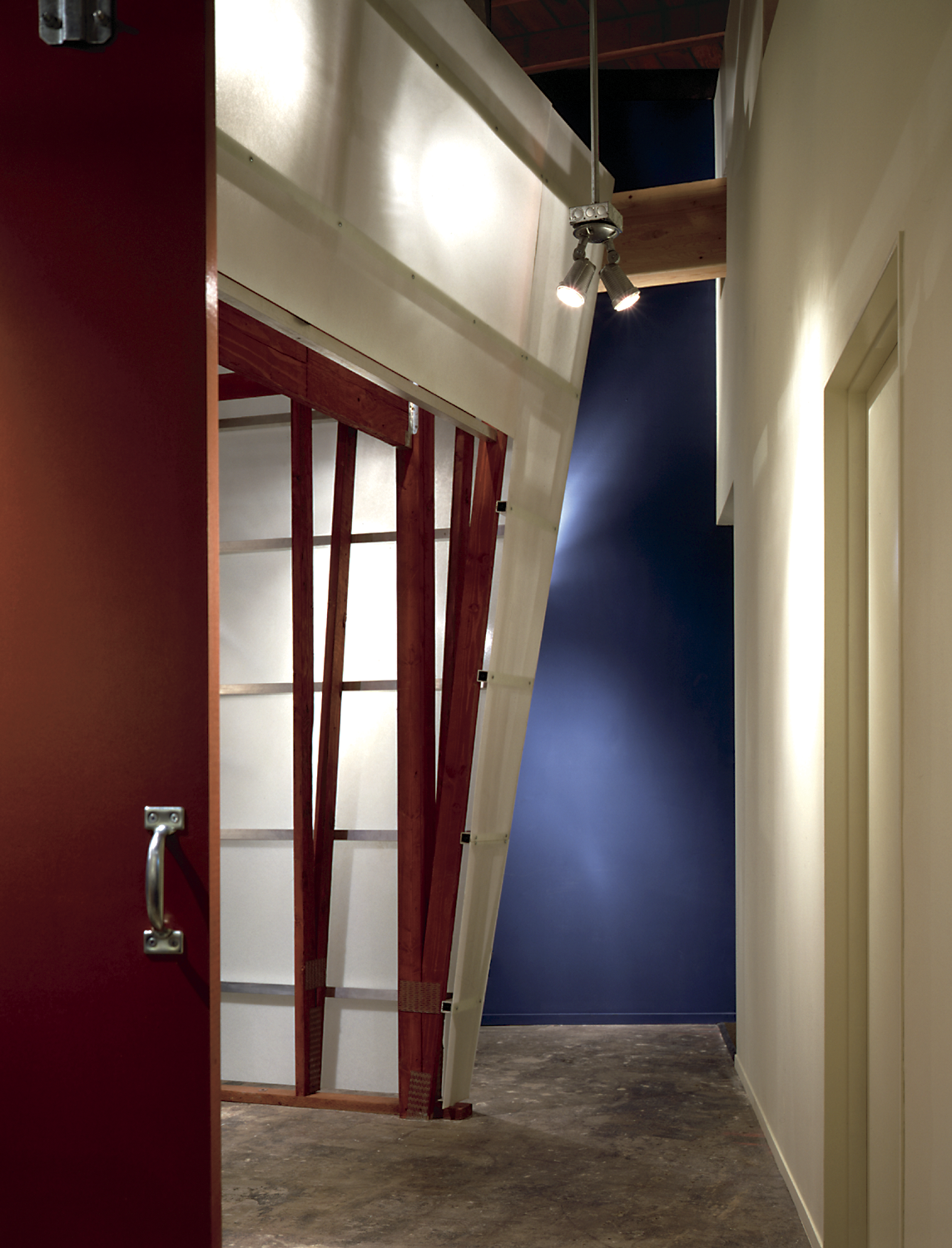 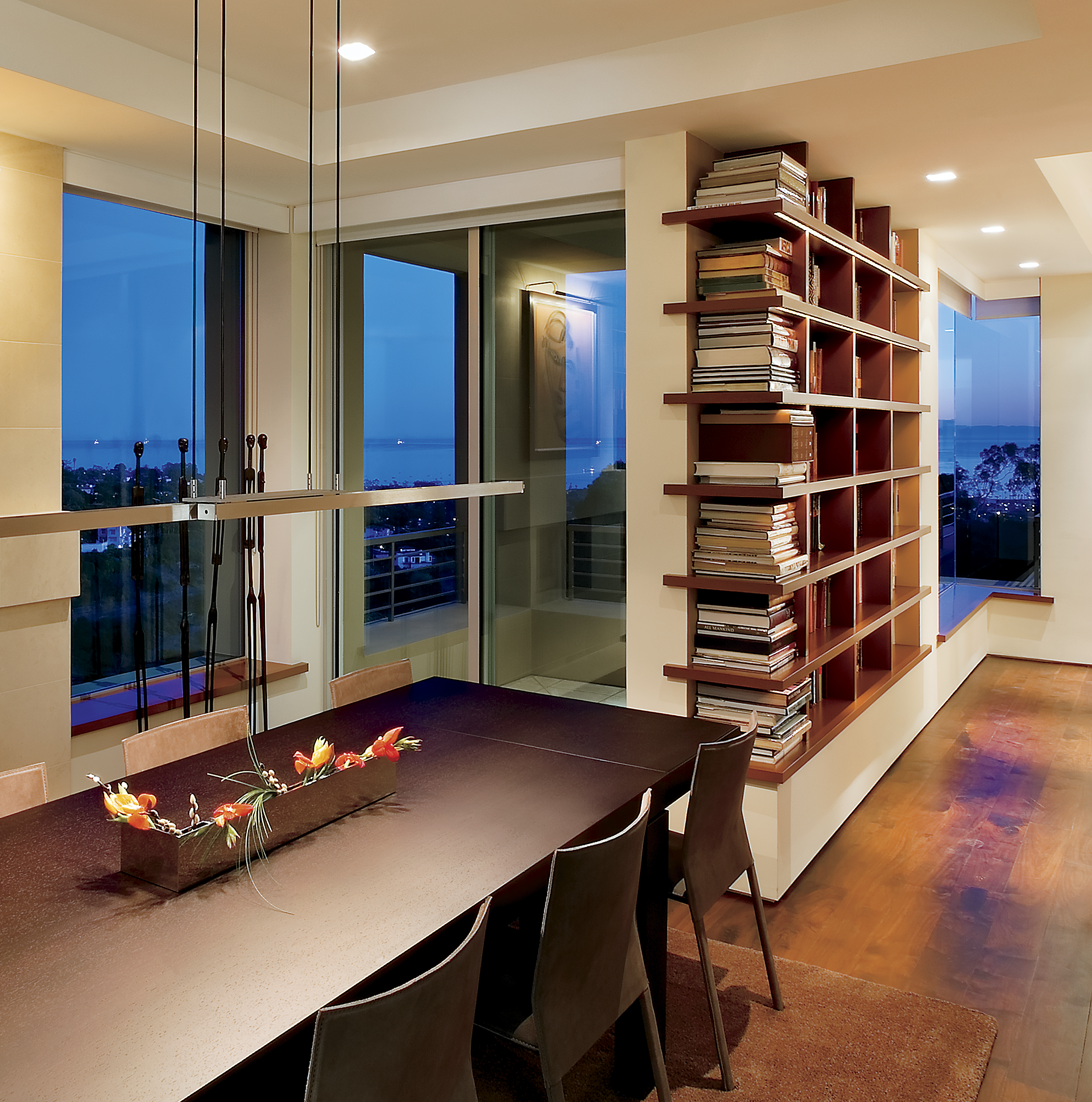 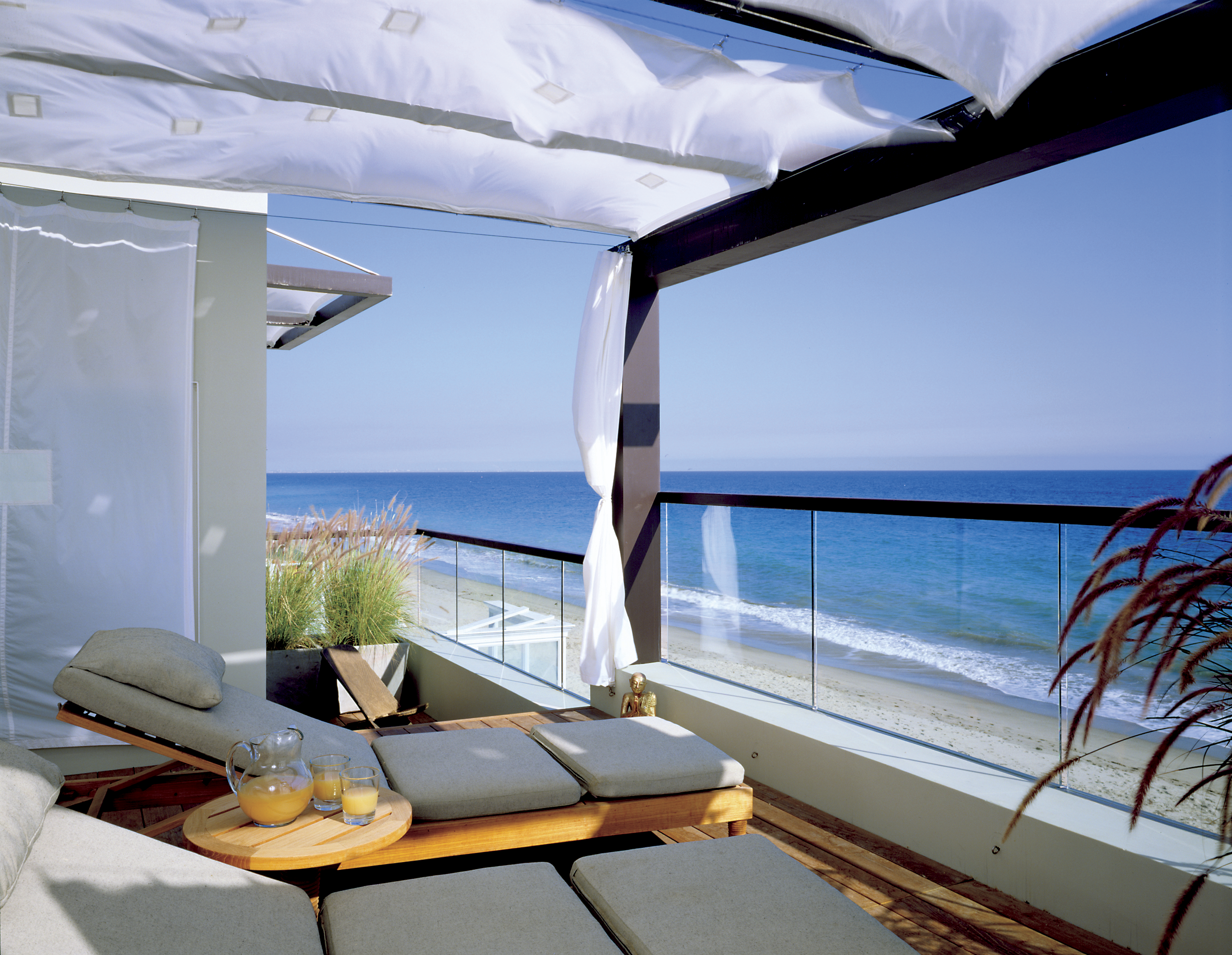 The client’s dream of an urban spa guided every design choice in the creation of this sophisticated beachfront home. Photo: Tom Banner 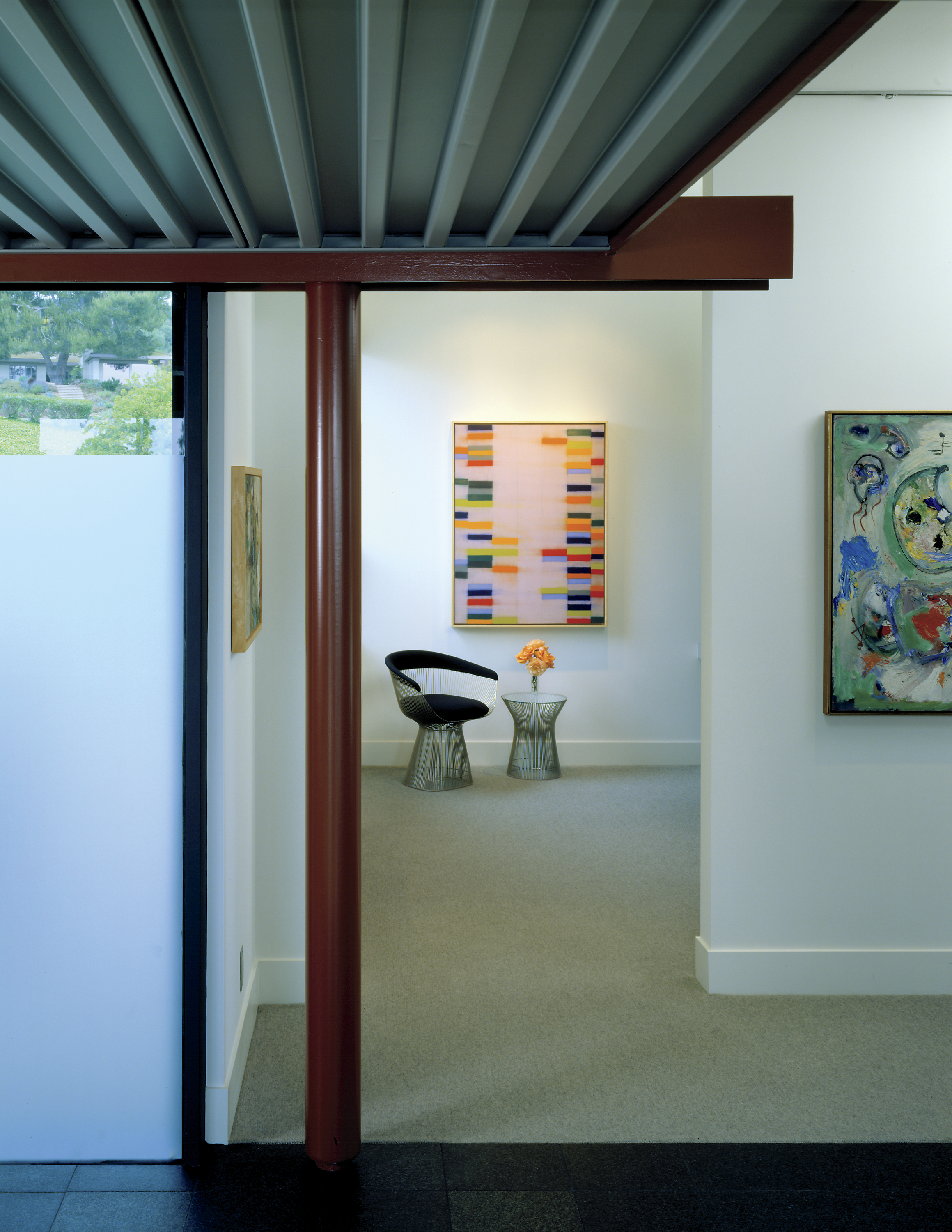 Inside, the architects use solid walls and glass to play with hiding and revealing, always modulating light. Photo: Tom Banner 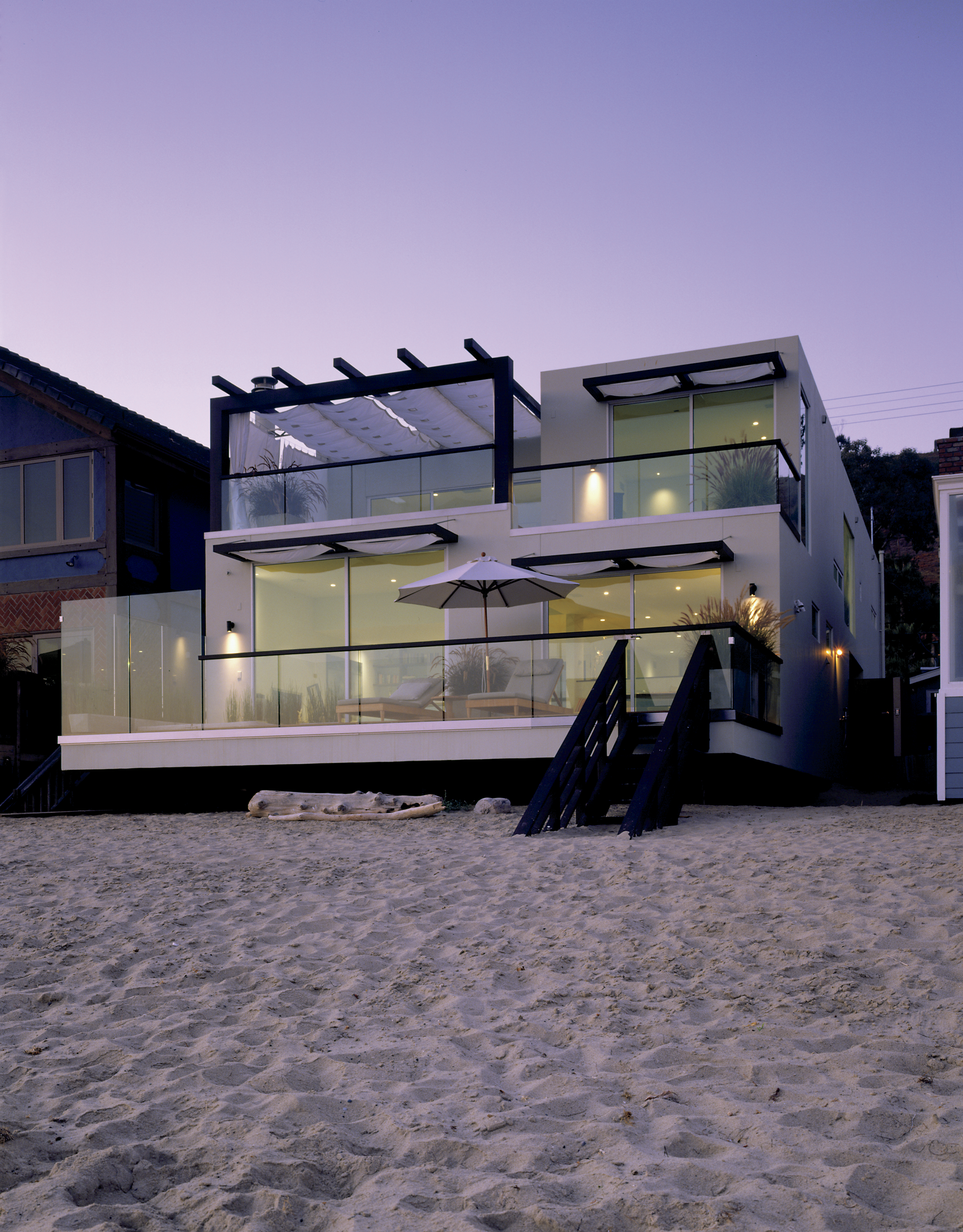 The judicious use of wood warms up a design that uses a repeating pattern of squares and oodles of glass. Photo: Tom Banner 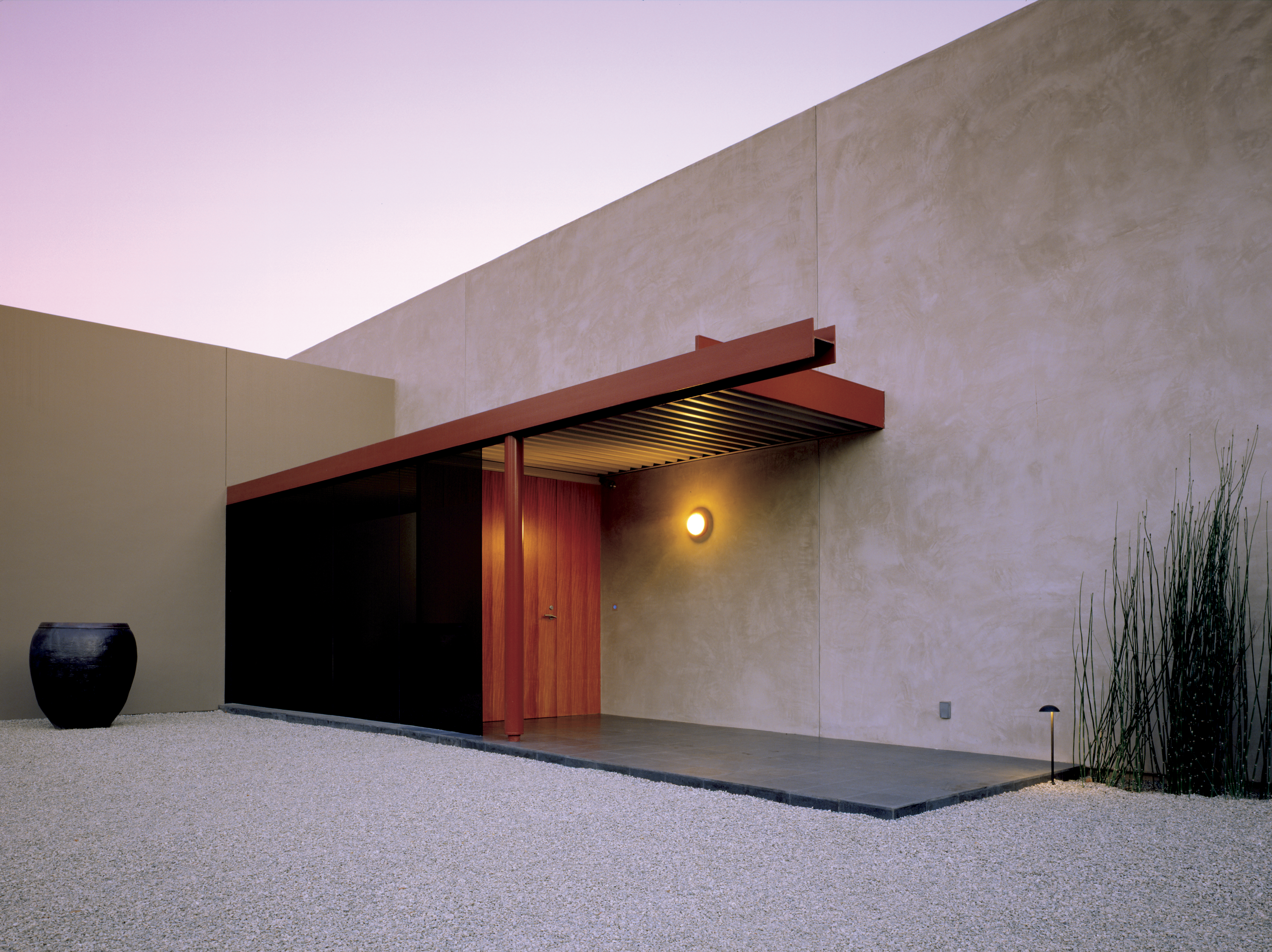 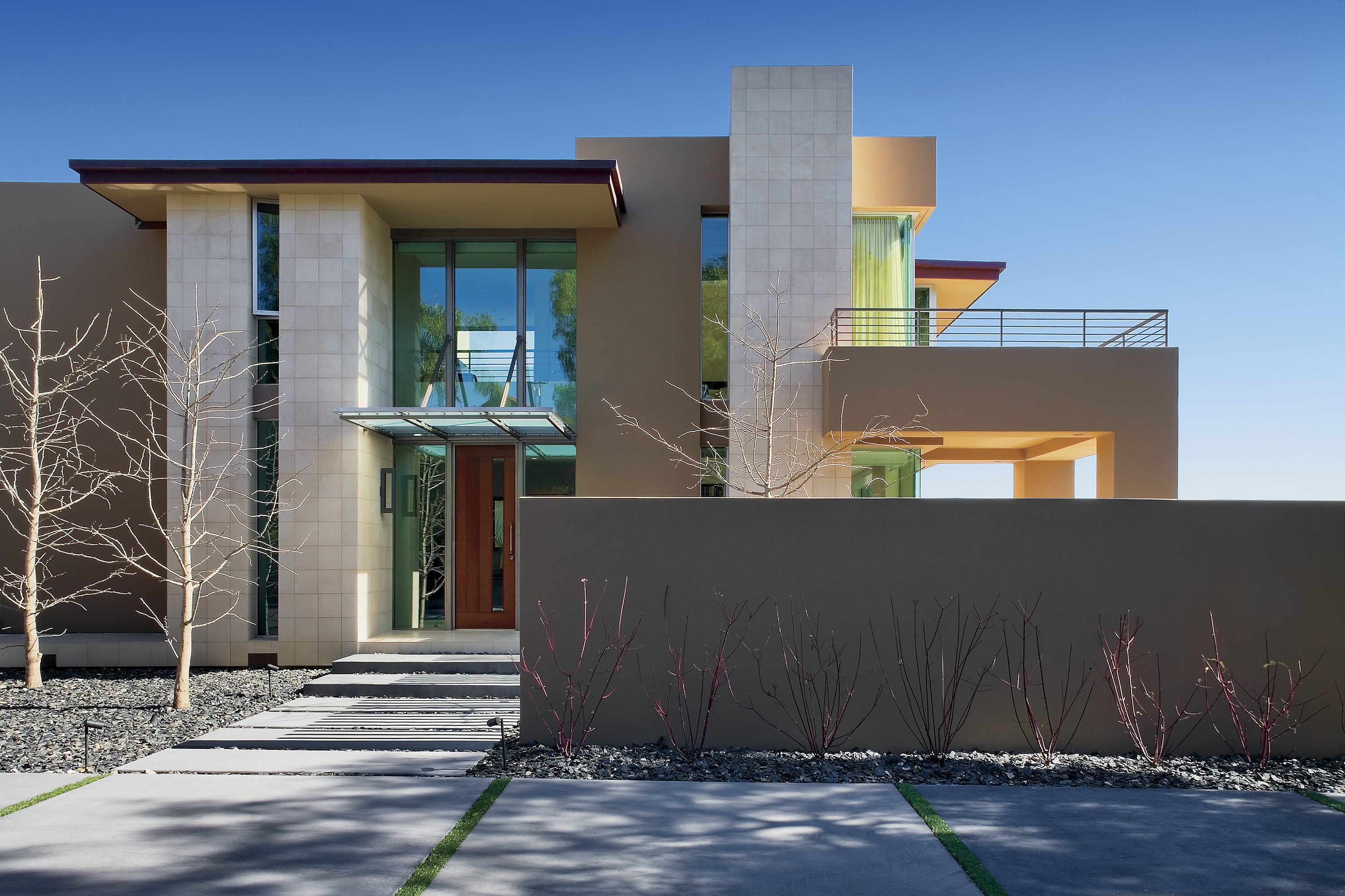