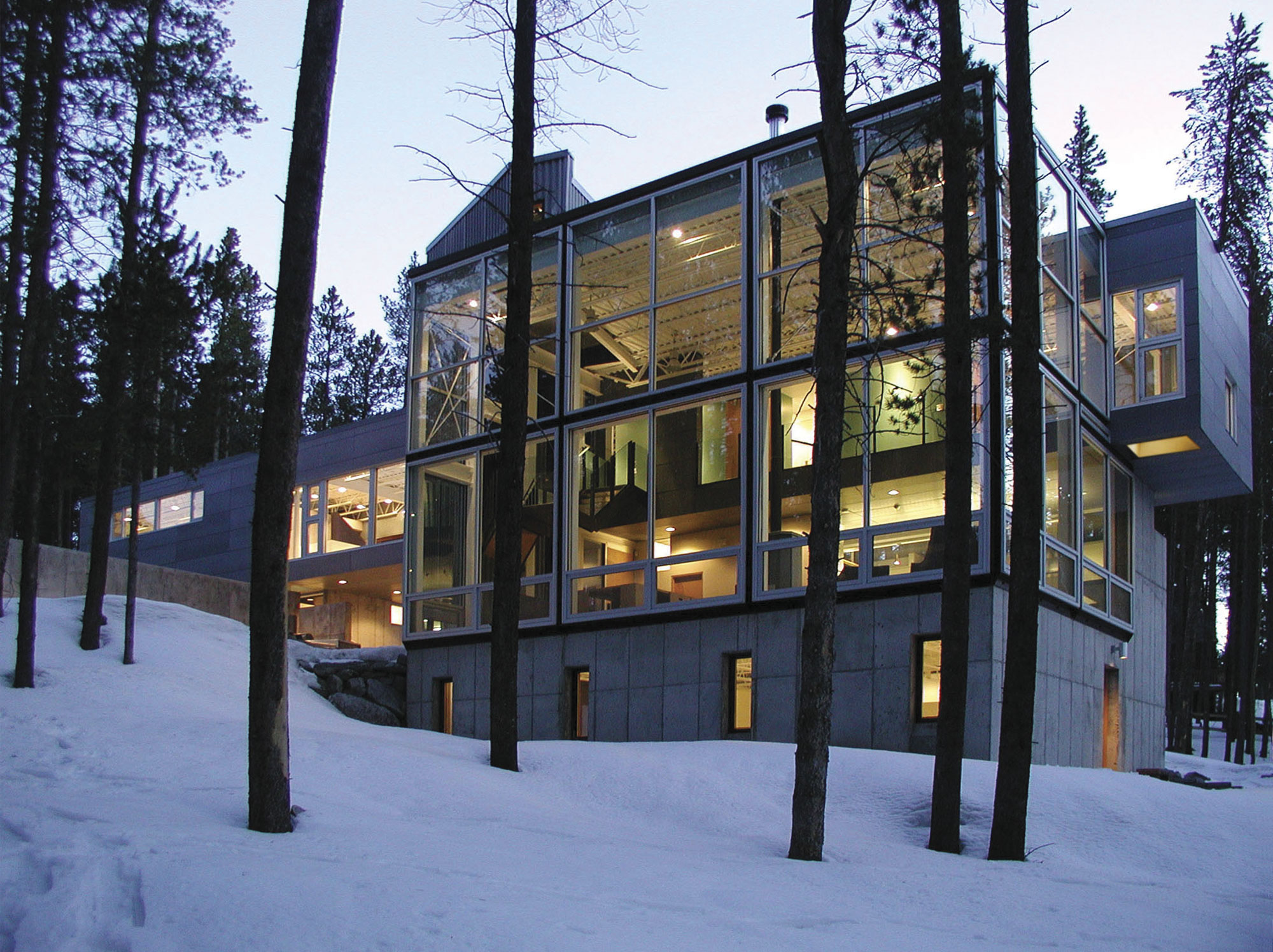 In the main living area of the Crowder residence, floor-to-ceiling windows blur the line between the outdoors and inside. Faleide describes the space as “a room made of the trees.”

Sustainable building may be all the rage right now, but architect Ron Faleide recognizes that, like so many tenets of ‘modern’ architecture, it’s an ancient idea. “Until the mid-20th century, homes had to be built sustainably,” Faleide says. “You usually had no choice but to use local materials, and those materials were precious because the labor required to make them usable was so extensive.”

He jumps up and pulls a design book down from the 18-foot-long bookcases that line his office, housed in downtown Denver’s historic Union Station. “Look at this,” he says, pointing to a photo of a wooden house built in Norway in the 13th century. “This house was crafted from local timber, and it’s lasted for hundreds of years. These days, the average tract home lasts seven years before it starts to deteriorate. But supposing we wanted to design a home that would last for 2,000 years  —  what are the implications?”

Educated, introspective and inquisitive, Faleide’s thought-provoking questions often open up new ways for his clients to think about buildings. With four degrees — including one master’s degree in architectural studies from Virginia Polytechnic Institute and another from Harvard in design history and theory — Faleide brings an enlightened and broad-minded perspective to any conversation about architecture. His eponymous firm, Faleide Architects PC, was founded in 1995 and has since won a number of major architectural awards including several Honor and Merit Design awards from AIA Colorado. The firm also has a unique collaborative relationship with Faleide’s colleague and college pal Carsten Roth and Roth’s firm in Hamburg, Germany. The partnership has allowed both firms to undertake larger projects, and the staggered time zones between the two offices occasionally gives them a competitive edge in responding quickly to bids and deadlines.

For initial design consultations, Faleide likes to visit his clients rather than meeting at his office. “Seeing them in their world, sitting down and talking, inhaling. Over time, you develop a vocabulary together, and many factors inform what happens with the project,” he says. During those early conversations about design possibilities, Faleide poses an intriguing question to his residential clients: What would they name the home they want to build? “Naming the home helps people think outside of the ‘three bedrooms, three bathrooms’ mindset that they might initially start with, and helps them begin to think more poetically about what they want the house to be,” Faleide says. The exercise often helps clarify the direction of the project. For instance, one homeowner came up with “Quiet in the Trees,” while another developed the similar — but decidedly different — “Dancing Amongst the Trees.”

Good questions often drive the design process. When a client gave Faleide the charge of designing a vacation home in the mountains, Faleide asked himself, “What’s the difference between a ‘regular’ house and a vacation home?” That question ultimately influenced the design and many of the architectural details for the Crowder residence in Breckenridge, Colorado, which the clients named “The Glass Box.”

Incorporating both a dramatic glass-enclosed space and a more private wall-enclosed space, the spectacular two-story main living area that Faleide describes as “a room made of the trees” features floor-to-ceiling windows. The open design incorporates a vertical solar chimney that lets out excess heat from the sunshine streaming through the windows. In keeping with the home’s retreat nature, there are no visible cupboards in the kitchen; dishes are housed in a large pantry instead. “Cupboards are a kitchen icon that say ‘Get to Work!’ so we eliminated them,” Faleide says. Instead of skylights, which weren’t practical in a setting that gets 300-plus inches of snow a year, Faleide instead designed “floorlights,” glass flooring that shows the ground below. “You might not normally get rid of the kitchen cabinets or put glass in the floor in a regular house, but it played into the concept of escape and fantasy for a vacation home,” he says.

Homeowner Bart Crowder says he hired Faleide because “I feel like Ron and I are kindred souls who found each other. When my wife and I wanted to build a mountain home, we didn’t want a dark log ‘cave’ but instead envisioned a glass cube in the woods. The other architects we talked to didn’t really get it, but when I described the idea to Ron he said, ‘Cool!’”

The couple spends about 100 nights a year at the home and Crowder says, “Being there is more exciting and interesting than I can put into words. In the living area, the walls don’t really end at the trees. The experience is beyond the room, and it’s a different room every hour of the day. It’s exceptional to see the clouds come and go and watch the weather move in. Being in that room during a snowstorm is a really neat experience; the snow blows through the trees and we get a fire going. We are more aware of the cycles of the moon there, too. In fact, when there’s a full moon overhead it’s so bright you can read in the living room.”

“People sometimes wonder if it’s a cold house because it’s steel, concrete and glass, but it’s actually the warmest house I’ve ever lived in. The radiant heat system in the concrete floors makes it warmer to walk barefoot in the winter than to wear your shoes. It’s comfortable in the summer, too; the temperatures in Breckenridge never get too warm, and the house was sited so that the summer sun doesn’t beat down on the living area. If it does get warm, we can open up the awning windows and the central chimney and let the warm air out.”

What about the practical realities of working in a kitchen with no cabinets? “My wife and I love the kitchen’s clean, simple lines,” says Crowder. “We keep everything in a large walk-in pantry lined with slide-out shelves, and it’s much easier than constantly opening and closing small cabinets. In fact, I’ll never have another house with kitchen cupboards!”

About half of Faleide Architects’ work is commercial, encompassing such diverse projects as low-income housing, retail space and a number of schools. Faleide’s eyes light up as he describes designing educational facilities. “I’ve always been interested in the opportunities that architecture offers to impact the art of learning,” he says. Faleide Architects designed St. Mary’s Elementary School in Greeley, Colorado, within the restrictions of a limited budget. The light-filled space features a central entrance for security and an interior hallway that connects the rooms and fosters community and interaction. The award-winning project was built for $85 per square foot; one student later commented wistfully, “This school is like my own castle.”

Faleide applied a similarly thoughtful approach to a senior housing project he designed in Del Norte, Colorado. “For some people at that age, life is a series of losses,” he says. “They’ve been moved from their homes, they’ve lost some of their friends. I spent a lot of time thinking about how we might be able to fill their lives with new things and provide opportunities for enrichment.” One popular feature in the building’s architecture was the design of the residential hallways. “I envisioned the corridor like a street,” Faleide explains. “I made it wide enough so that residents could sit outside their rooms much like you might sit on your front porch in an urban setting. In this way, they can connect with others in the corridor if they want to interact, or retire to their rooms if they don’t.”

Architectural sustainability, according to Faleide, is as much about usefulness and lasting value as it is about using green materials and environmentally friendly design. “The common use of the word ‘sustainability’ in architecture is generally related to the carbon footprint; what are you expending to make the building, and what resources are used by the building over its life cycle? The third question I would add is, what is its long-term use or adaptability? The accommodation of usefulness is uniquely architectural, and it’s an often-unexplored aspect of sustainability.”

“Most products today don’t do much beyond their initial purpose, but our buildings can do so much more,” Faleide adds. “They can be places to gather, places for solitude, places for celebration. Our buildings can accommodate a much broader range of use, and ultimately, that’s where good architecture resides.” 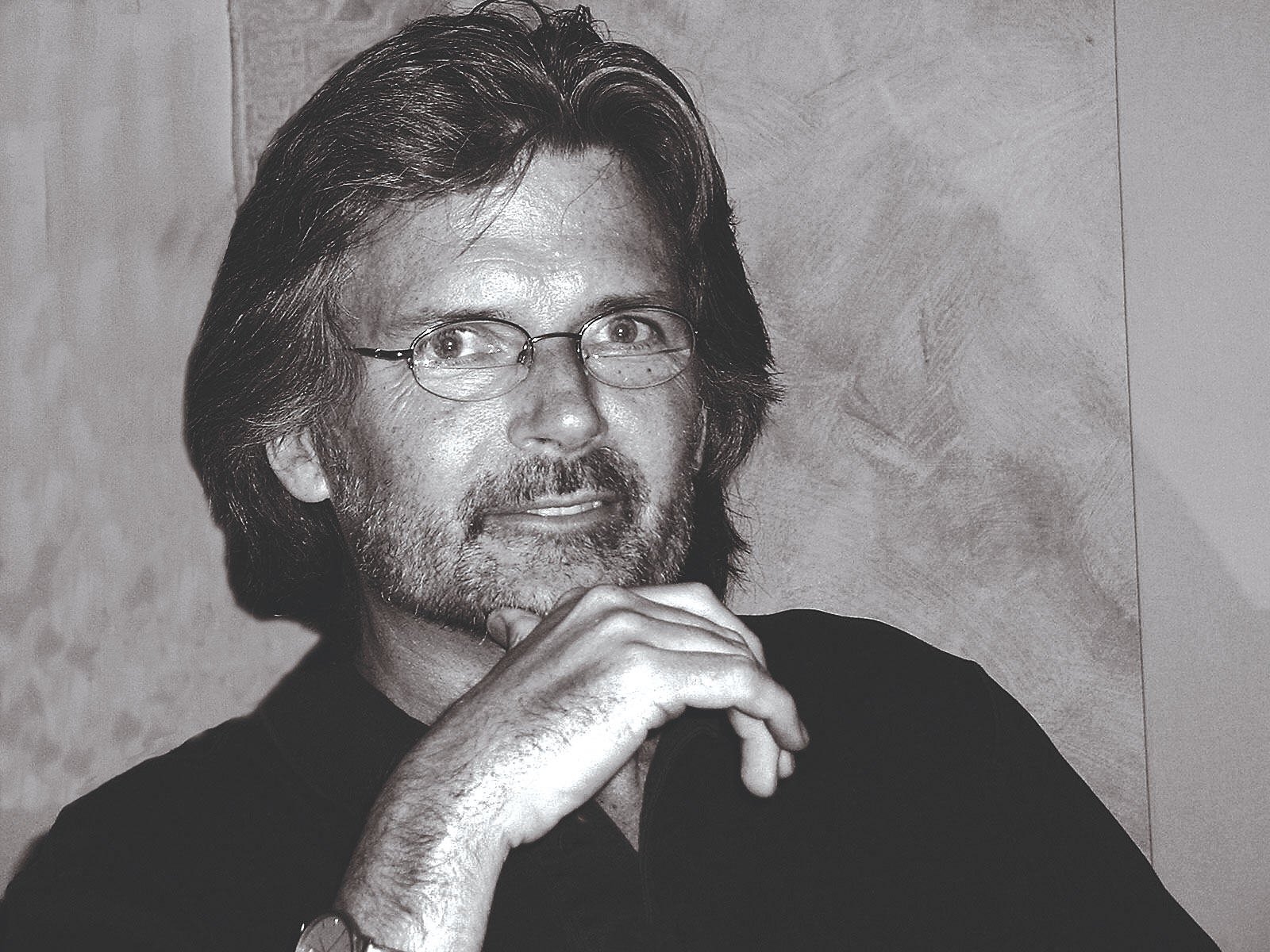 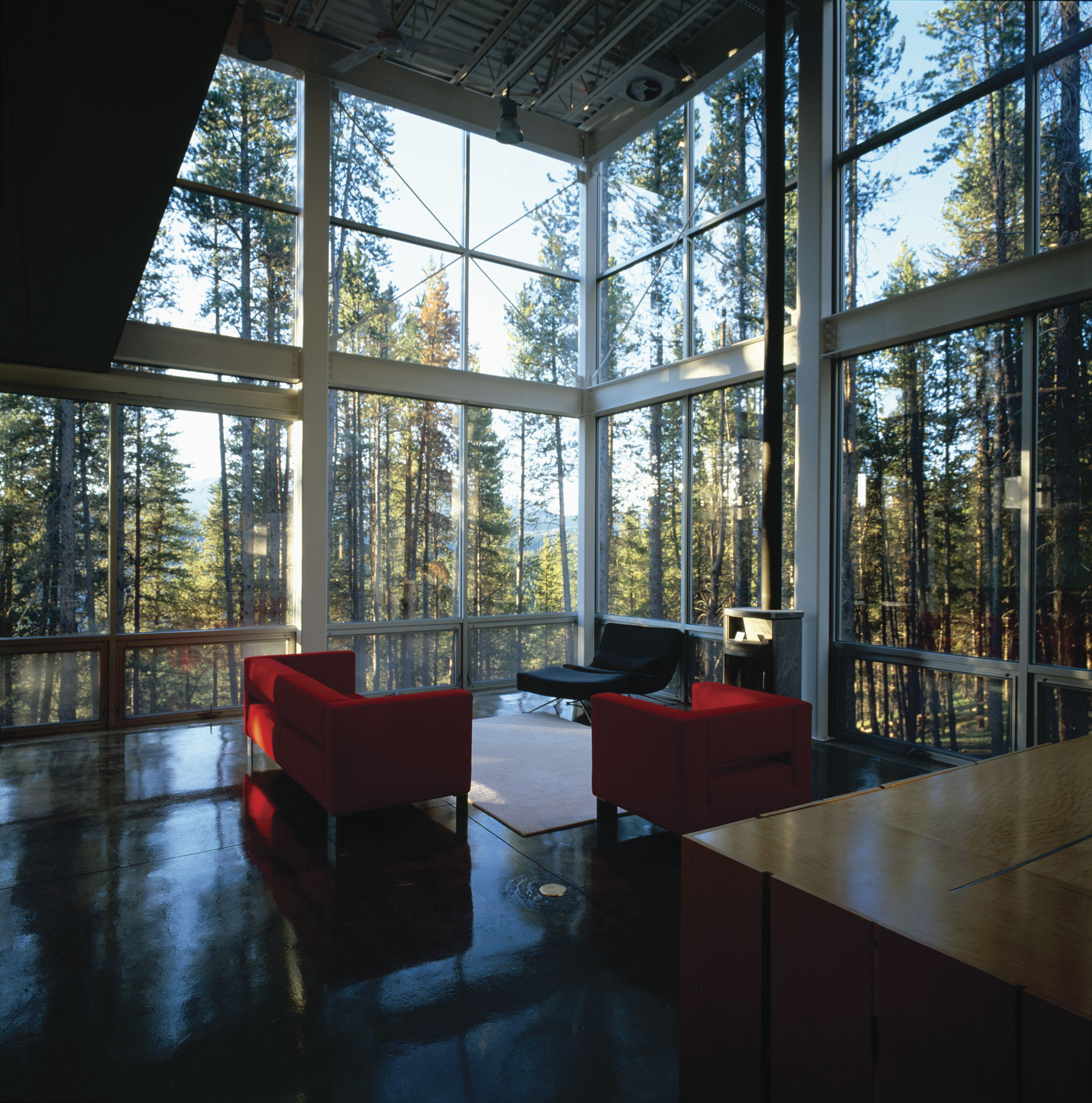 The homeowners envisioned “a glass cube in the woods” for their vacation home in Breckenridge, Colorado. The space is warmed during the winter months as sunshine streams through the windows. In summer, an interior solar chimney lets excess heat escape. 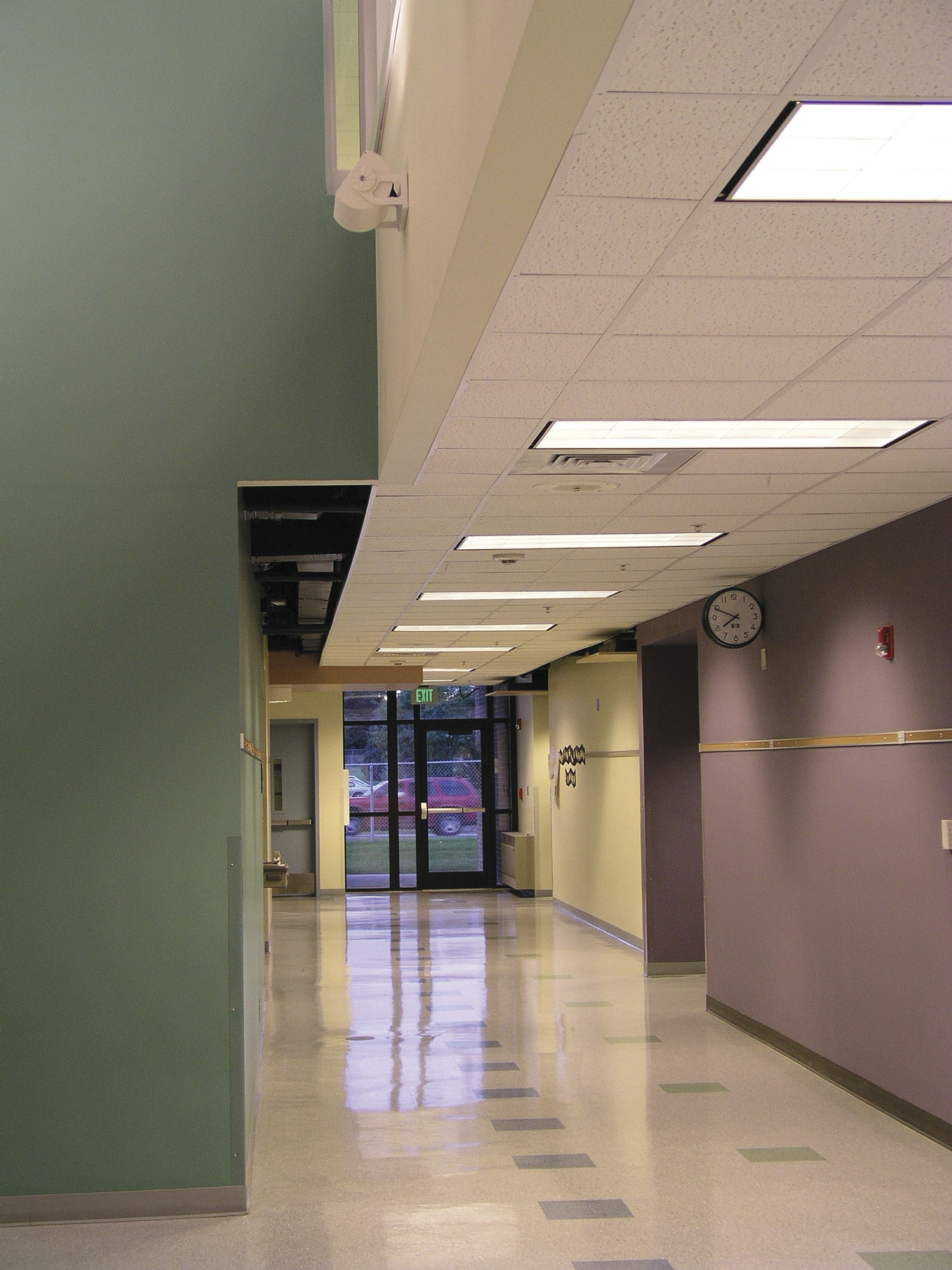 The school’s interior hallway connects the rooms and also helps foster community and interaction between the students and faculty. 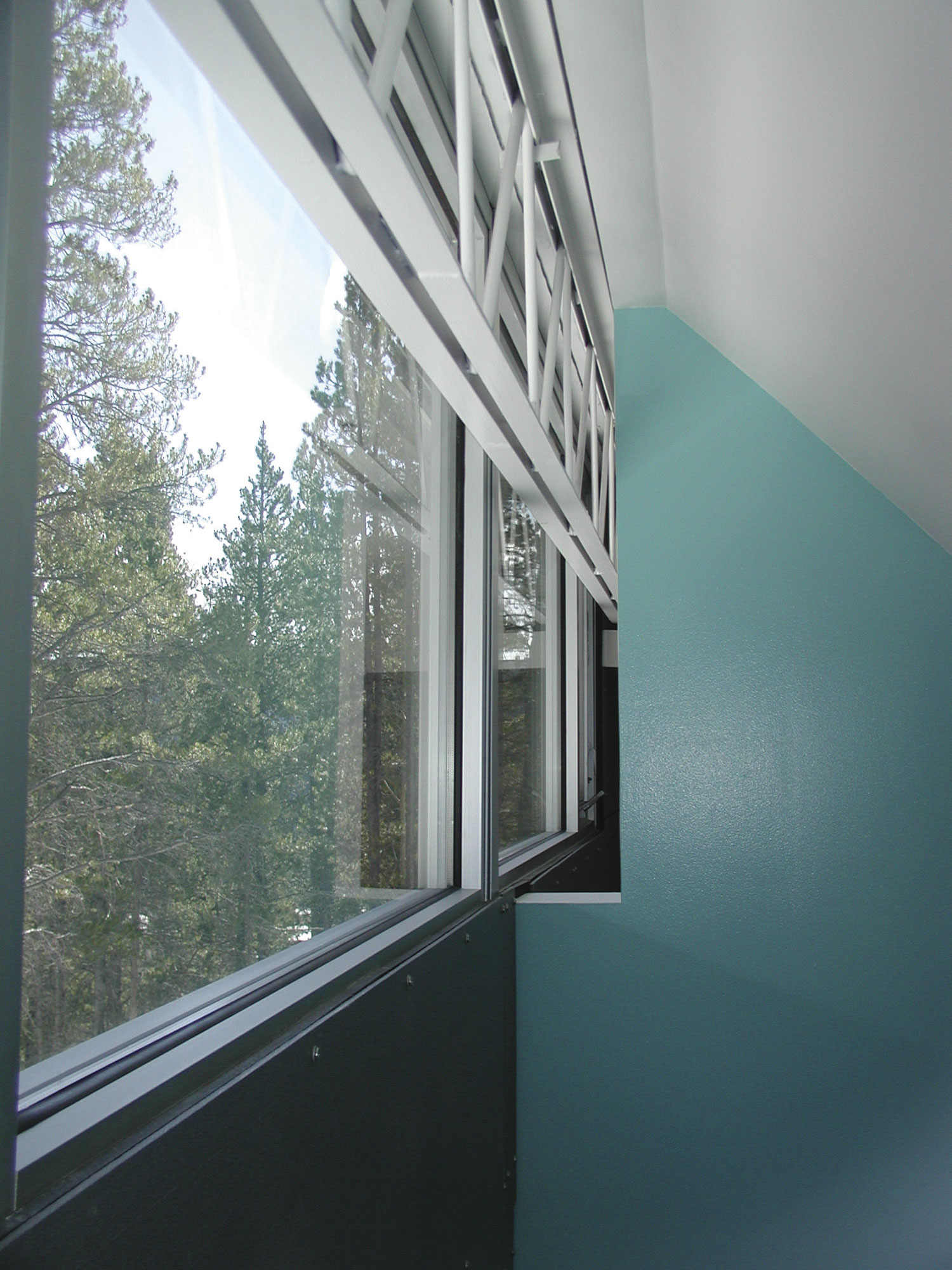 In the master bathroom, shown here, and throughout the Crowder residence, horizontal windows were carefully placed to frame the views surrounding the home. 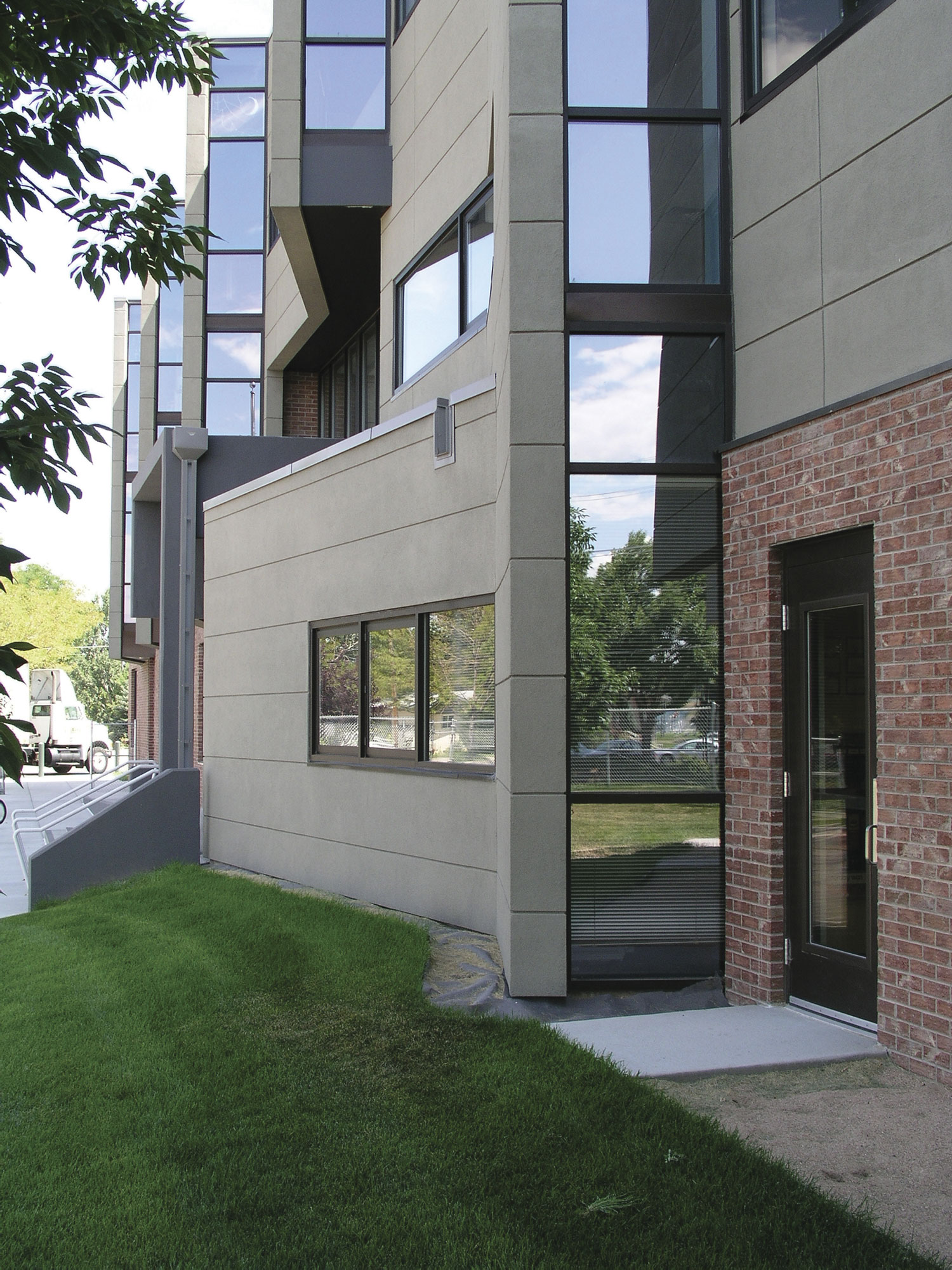 Abundant windows flood the interior spaces of the school with light. “I’ve always been interested in the opportunities that architecture offers to impact the art of learning,” Faleide says. 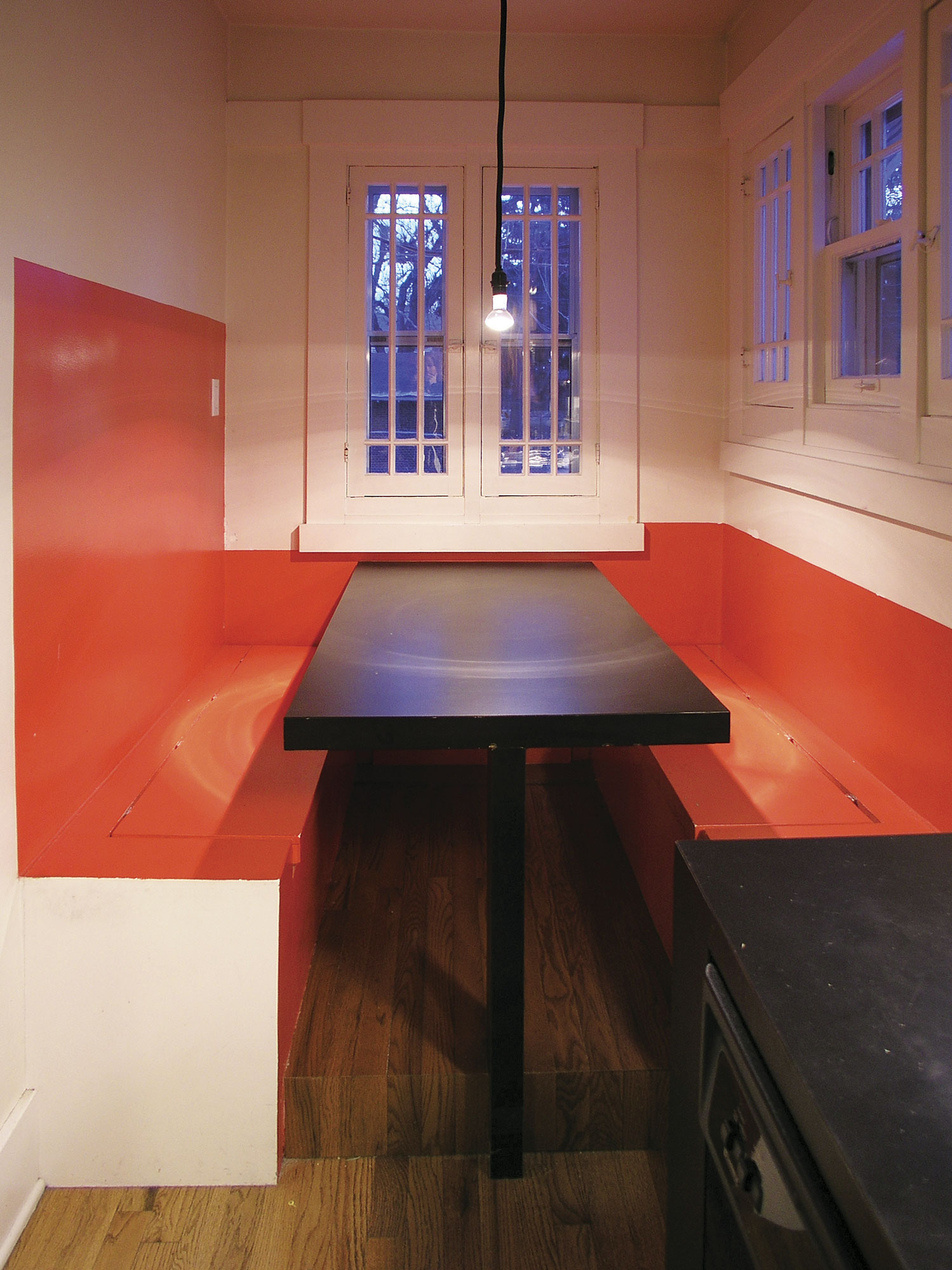 Contemporary styling contrasts with a vintage window in this colorful breakfast nook. 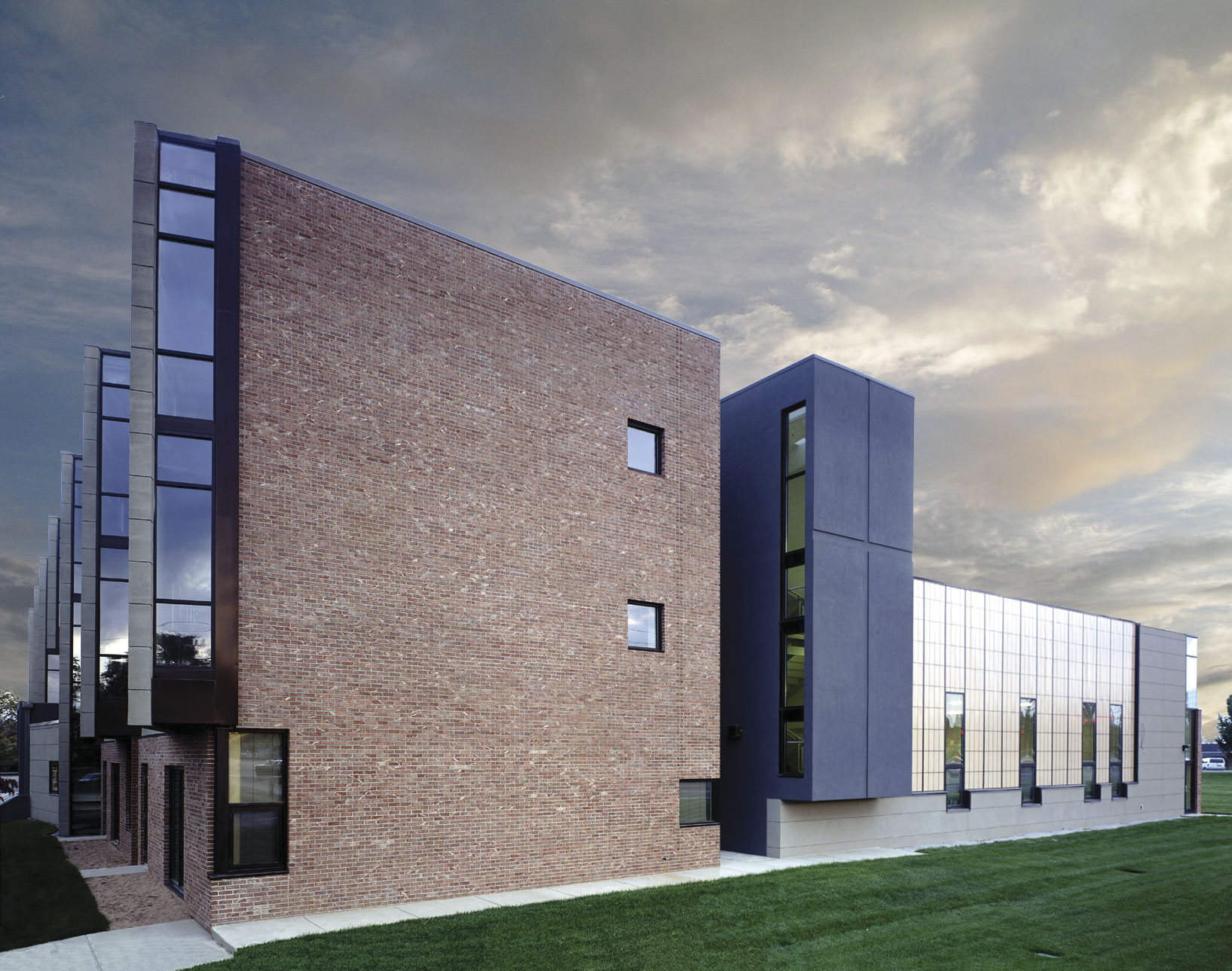 St. Mary’s Elementary School in Greeley, Colorado, is an award-winning design that Faleide created within the confines of a tightly restricted budget.