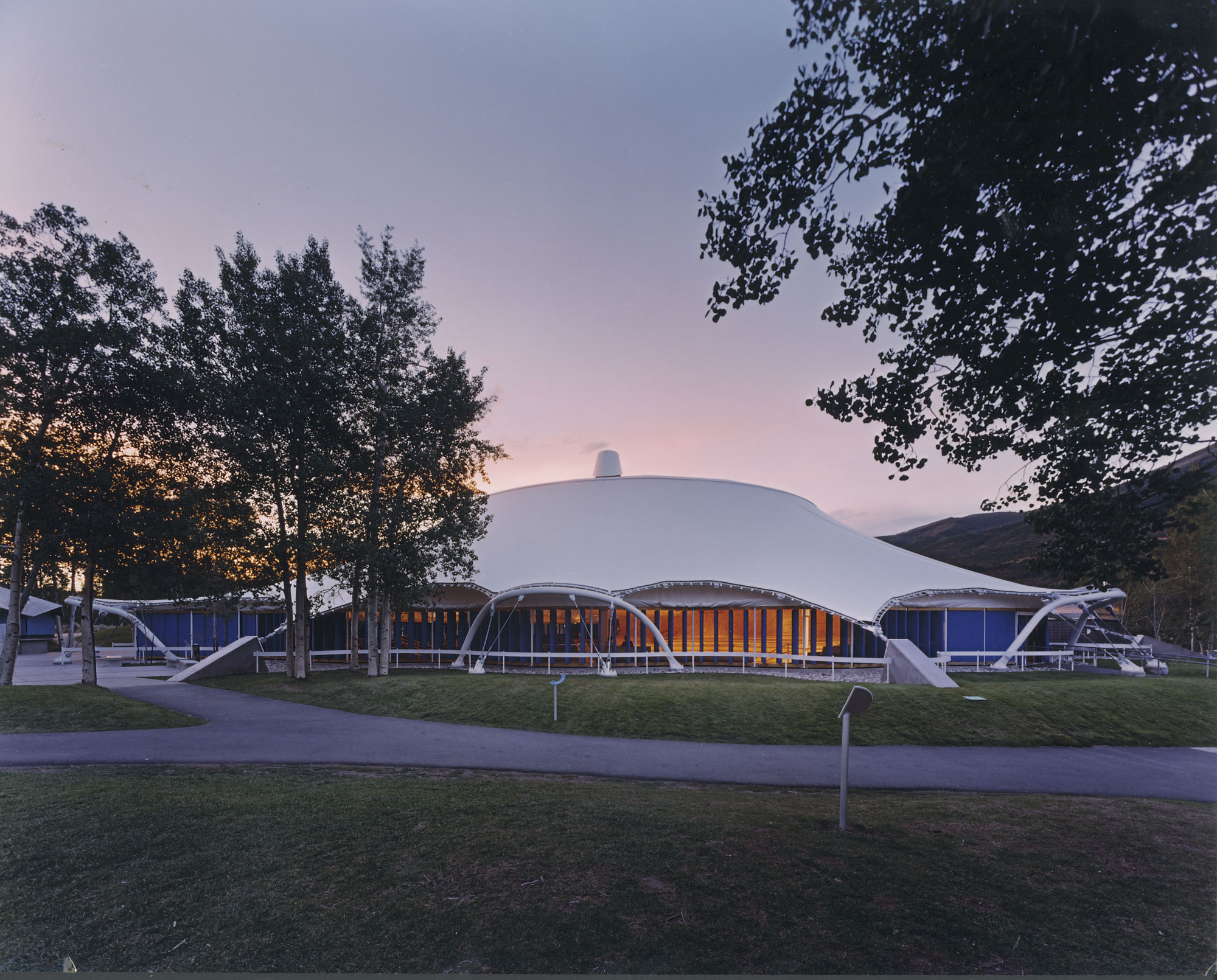 What stirs an architect’s passion for design? For award-winning Colorado architect Harry Teague, the answer may be embedded in his very DNA. Teague’s grandfather was renowned industrial designer Walter Dorwin Teague, considered one of the pioneers of the profession and the innovator behind many consumer and industrial products including such icons as Steinway pianos and Texaco service stations. Harry Teague’s late father, W. Dorwin Teague, also a prominent industrial designer and inventor in his own right, put his stamp on everyday items such as vacuum cleaners and ice buckets, and designed such familiar fixtures as the cash register and a reclining dentist’s chair.

“Some of my fondest memories are of building things with my dad in the shop,” Teague says. “I loved the process of making. Once you get the tangible reward of building something, you discover you don’t want to lose that.”

Teague grew up in New Jersey, graduated from Dartmouth and got his Master of Architecture from Yale in 1972. “During the era when I was in school, there was a lot of exciting work being done by people who built what they designed,” Teague says. “That dual process allowed much more experimentation with materials and forms, which I found very exciting.”

A ski racer in college, Teague headed west for the snow and discovered an environment and culture distinctly different from his Eastern upbringing. “Perhaps because I was a transplant, I saw the West with fresh eyes,” he says. “This was still a pretty wild place back then; building codes were less stringent, and we could design, build and learn. After I moved here we did just that; we designed houses and built them, and the process gave us valuable experience in how buildings are made — the expression of structure, the bones, the way they’re put together — because we built them ourselves by hand.”

Teague even owned a building company that he named S.L.O.W. Construction. “The acronym stood for the ‘society of loosely organized workers,’ ” Teague says. “Buildings at that time were often practical responses to the elements. We were dealing with snow and extreme weather, and I was an early proponent of structural elements like metal roofs and galvanized metal siding. That period in my career has resulted in many interesting and wonderful relationships with the contractors we use today. Architects sometimes ask builders to do impossible things, but we know what can and can’t be done because we’ve experienced it firsthand.”

When he started to get more commissions than he could build, Teague narrowed his focus to concentrate on architecture. He founded Harry Teague Architects in 1975; today the firm employs 12 professionals and three support staff with projects encompassing a balanced mix of institutional, residential and commercial work.

Some of Teague’s favorite buildings are the community schools, art centers, music halls and institutions he’s designed. An early commission was the Aspen Community School in Woody Creek where his children attended. “Education is inherently progressive, and I wanted to create a space that encouraged different age groups to mingle,” he says. Teague also designed the Aspen Center for Physics and says, “It’s gratifying to hear the feedback that the space works well and that when the physicists come here in the summer, the building contributes to their progress.” Teague’s ground-breaking design for the Benedict Music Tent and adjacent Harris Concert Hall, home of the Aspen Music Festival, is well-known in the Aspen community for the building’s sterling acoustical qualities.

Yet because Teague Architects doesn’t have a trademark look or style, Teague says his initial meetings with clients are crucial to determining whether the firm is a good match for the project. “During the initial consultation process, we get to know one another,” he says. “We’re careful to explain about our experimental nature. If that’s interesting to the client, we’re on the right path. The relationship works for those clients who want to go on a journey of exploration with us.”

If the connection feels right, the next step is to talk about the project. Teague says, “When the client describes the building in words — with basic details like rooms, activities, garage spaces, etcetera — as well as their own architectural experiences, it helps us learn about what they’re excited about. We begin by coordinating those initial ideas with the budget; we like to work on paper before we get seduced and tantalized by design ideas.”

Teague’s team also carefully assesses the site, from the profiles of hills and buildings to the vegetation, geology and soil type. “We want the building to connect not only to the topography, but also the geology of the landscape,” Teague says. “Some things react to their surroundings by being a counterpoint, while some become part of it. I say you can’t beat it, so why not join it? In this region, we also have to think about snow — how it drifts, the way it affects colors — about six months out of the year.”

Prior to breaking ground, the firm creates physical models of the project. “We have a full-time model maker on staff and a large space in the office devoted to that; I’m a strong believer in the physical process,” Teague says. “We talk about the models and study them, and I also sit and sketch in meetings with clients. We might use the virtual tools on the computer for getting inside the building, and we continue to talk and bounce ideas back and forth. It’s synthesis; the process of blending conversations, images and ideas is a key part of our interactions.”

Harry Teague Architects recently designed a 2,600-square-foot Crested Butte, Colorado, home for John and Robin Norton, a project Teague describes as a “very fun, interesting, green Colorado house.” The project received a Merit Award from AIA Colorado West this May, and homeowner John Norton says, “We’d lived in Aspen for 11 years and had been in a number of buildings that Harry had designed. While his style changed over the years, we noticed that it always felt good to be in a Harry Teague building. Ultimately, that’s why we chose him. We described what we wanted, which was a relatively small, energy efficient house with a huge garage — and then we let him go. We had enough confidence in Harry to let the expert be the expert.”

“The result is that we got a house that’s wonderful to live in,” Norton says. “There’s not one space that we don’t use, nor is there a space we wish we had. We have a cozy living area, plus a separate wing for guests and the oversized garage we needed to store our family’s outdoor equipment and gear. One aspect of the home that we never would have thought of is the acoustics; guests have actually noticed and commented about the fact that it’s easy to follow conversations here and the sound system is great. I think Harry’s experience with musical halls informed his ability to bring brilliant sound qualities into the house. But who thinks of acoustics when they design a house?”

In contrast to his private residential work, Teague has also designed a number of affordable multi-residential buildings like the Burlingame housing project in Aspen. “I believe it’s hugely important work to do,” Teague says. “I was deeply influenced by a teacher I had at Yale — the world-renowned architect Moshe Safdie — who maintained that there was a bill of rights for housing people. He believed that everybody was entitled to some sort of outside space, some way of growing things, and a building designed in such a way that a person could identify his home. Taking that philosophy to heart, we added our own ingredient: the need for communal space. We believe we have to plan for public spaces; without that sense of community, affordable housing can become a ghetto of sorts. For that reason, we think it’s essential to include common areas for residents in our housing projects.”

Teague also designed the firm’s Basalt headquarters, a contemporary office building with many green features. “We built it for a reasonable cost, and the current tax incentives really helped us,” he says. “We have hot water and electric collectors on the roof and an integrated hydronic heating system. We’re currently producing more electricity than we’re using, and we’ve significantly reduced gas consumption; we plan to experiment with direct geothermal cooling next. We’re getting close to being carbon neutral, and at the same time, it’s a very comfortable building.”

Long before it was fashionable, Teague was a champion of eco-friendly design. “It’s very exciting that so much attention is currently being paid to sustainable building,” he says. “The intention and effect are wonderful. Still, the equation that makes something truly sustainable is complicated; it isn’t completely clear. For instance, longevity and durability are both important aspects of sustainability. If the building becomes obsolete because of its shape or function, it’s not sustainable. LEED Certification is wonderful because it helps us categorize what’s headed in the right direction. The green movement is having a huge impact on our environment, and it’s important that we continue to work on it.”

Cyd Pougiales, AIA, is the principal architect at Thira Inc., in Steamboat Springs, Colorado, and the president-elect of AIA Colorado West; she also studied under Teague when she was a graduate student at the University of Colorado Denver 20 years ago. “Harry would come into the classroom and literally put his hands on our projects as he talked to us about our work,” she recalls. “I always remember those lively discussions and the way Harry inspired us to think about the social and human aspects of design and space. He’s had a significant influence on the way I think about the integration and connection between people and place. Harry has a life and spirit unlike anyone else, and he raises the bar for us as architects.”

With a career that has spanned more than three decades, numerous awards (including AIA Colorado’s Architect of the Year in 2000) and countless accolades, Teague is still just grateful to do what he does. “Every day is exciting and interesting,” he says. “We’re so lucky; we get to practice this broad profession with its changing projects and different roles, and we also get to learn and play. At the same time, when we get a commission with implied solutions, we’re constantly experimenting and pushing the envelope — whether it’s exploring new ways to accommodate activities in a building or different uses for materials.” Harkening back to his roots as a descendant of imminently talented designers and inventors, Teague adds, “I guess you might say I have a personal propensity to examine things from scratch.” 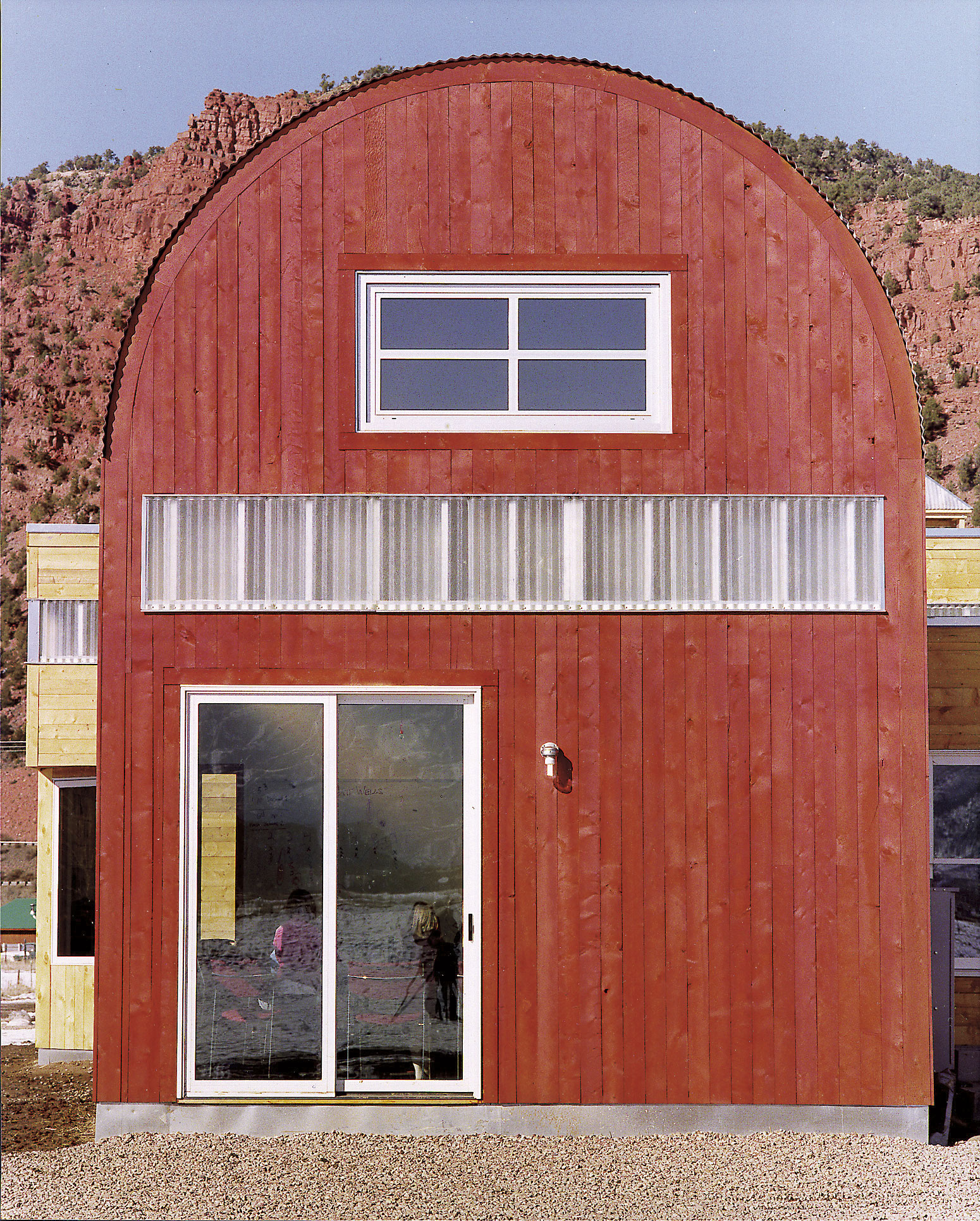 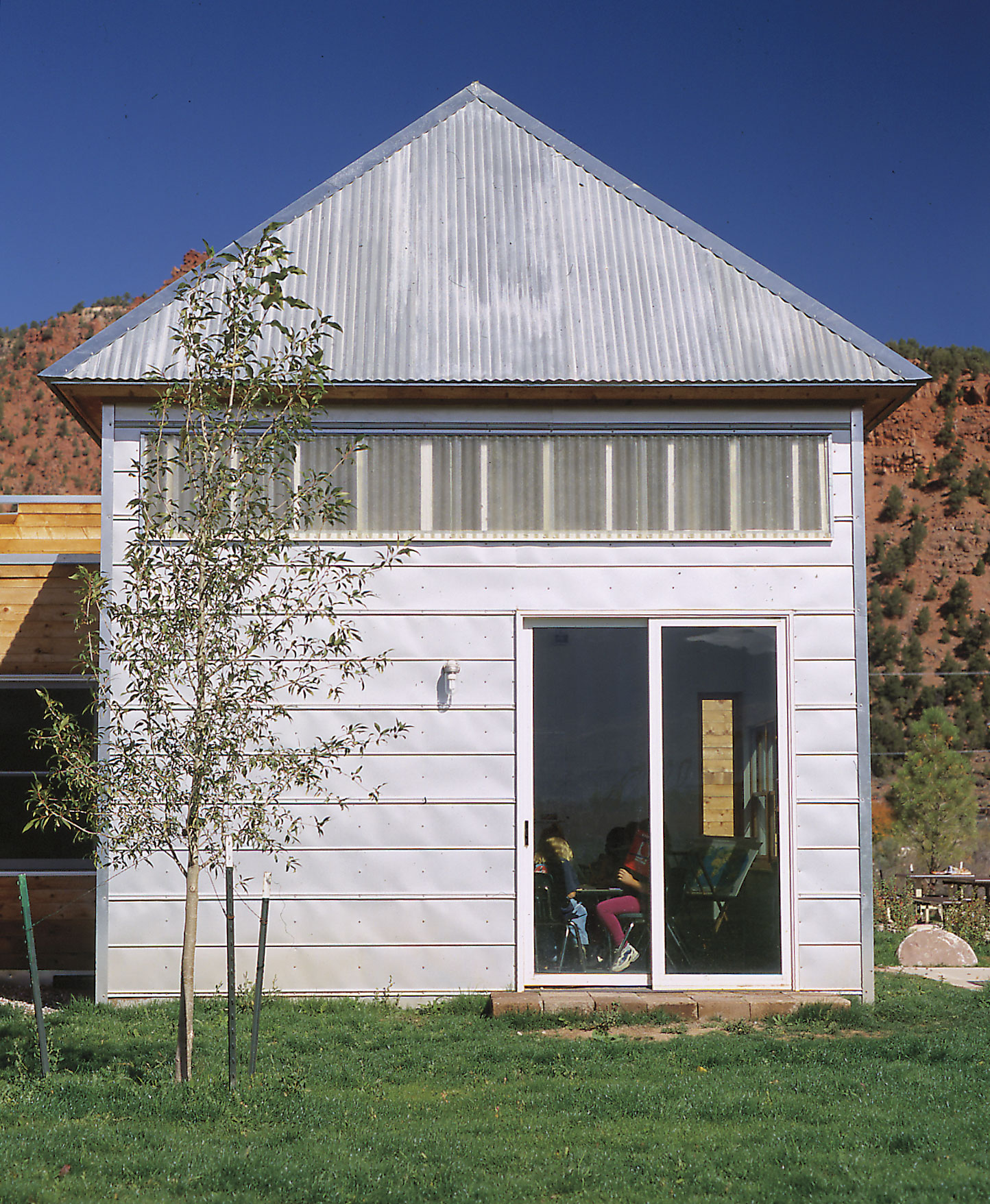 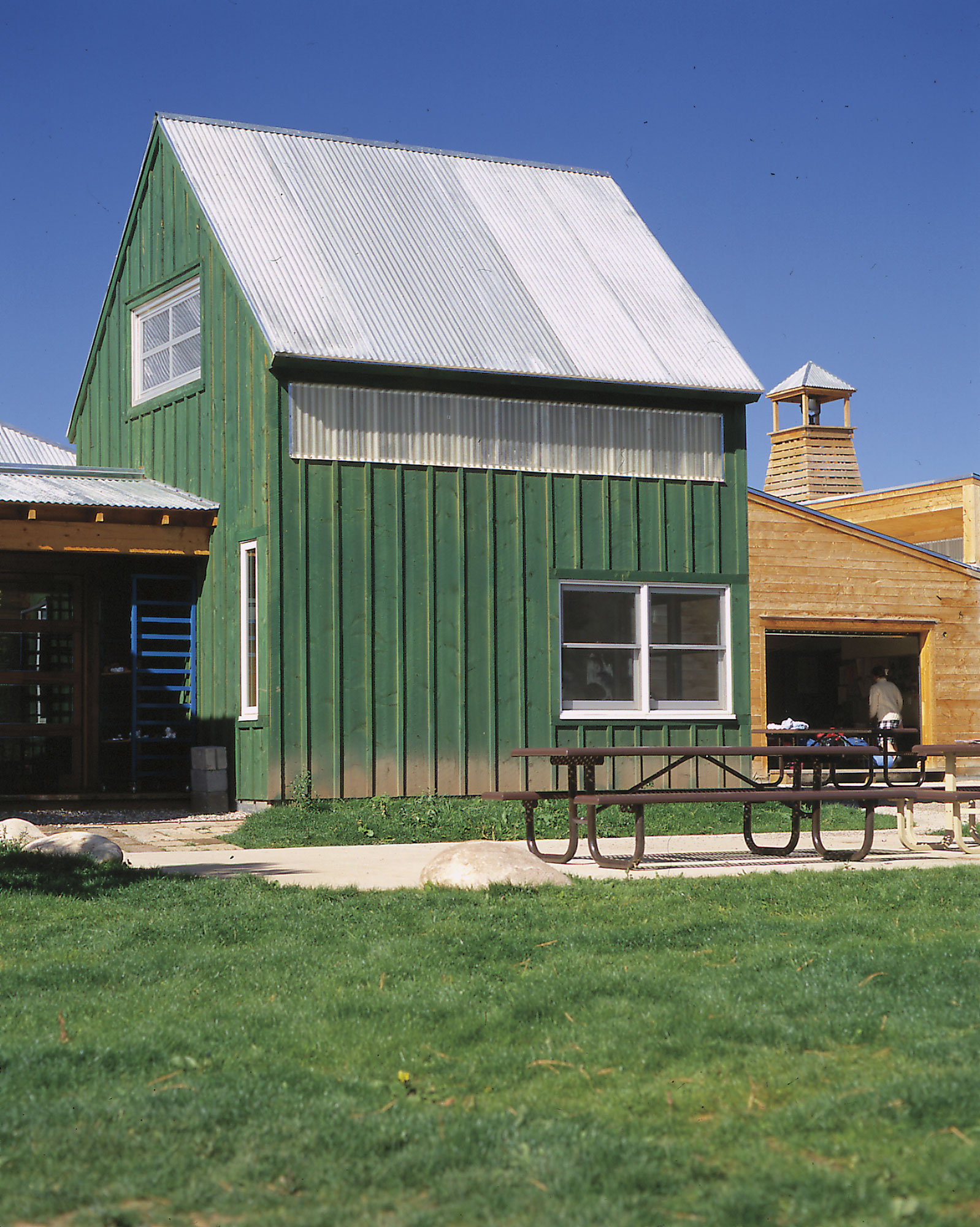 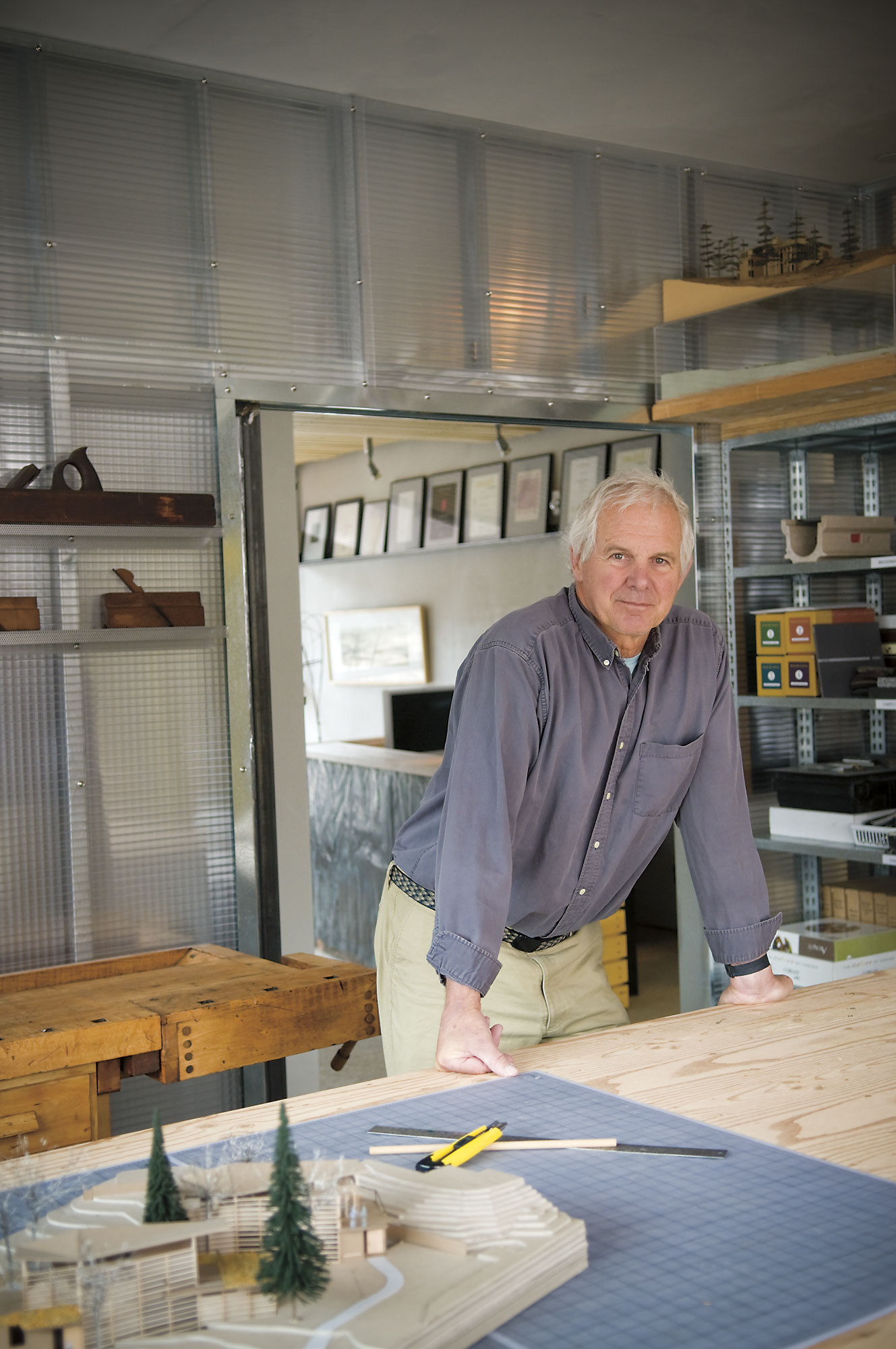 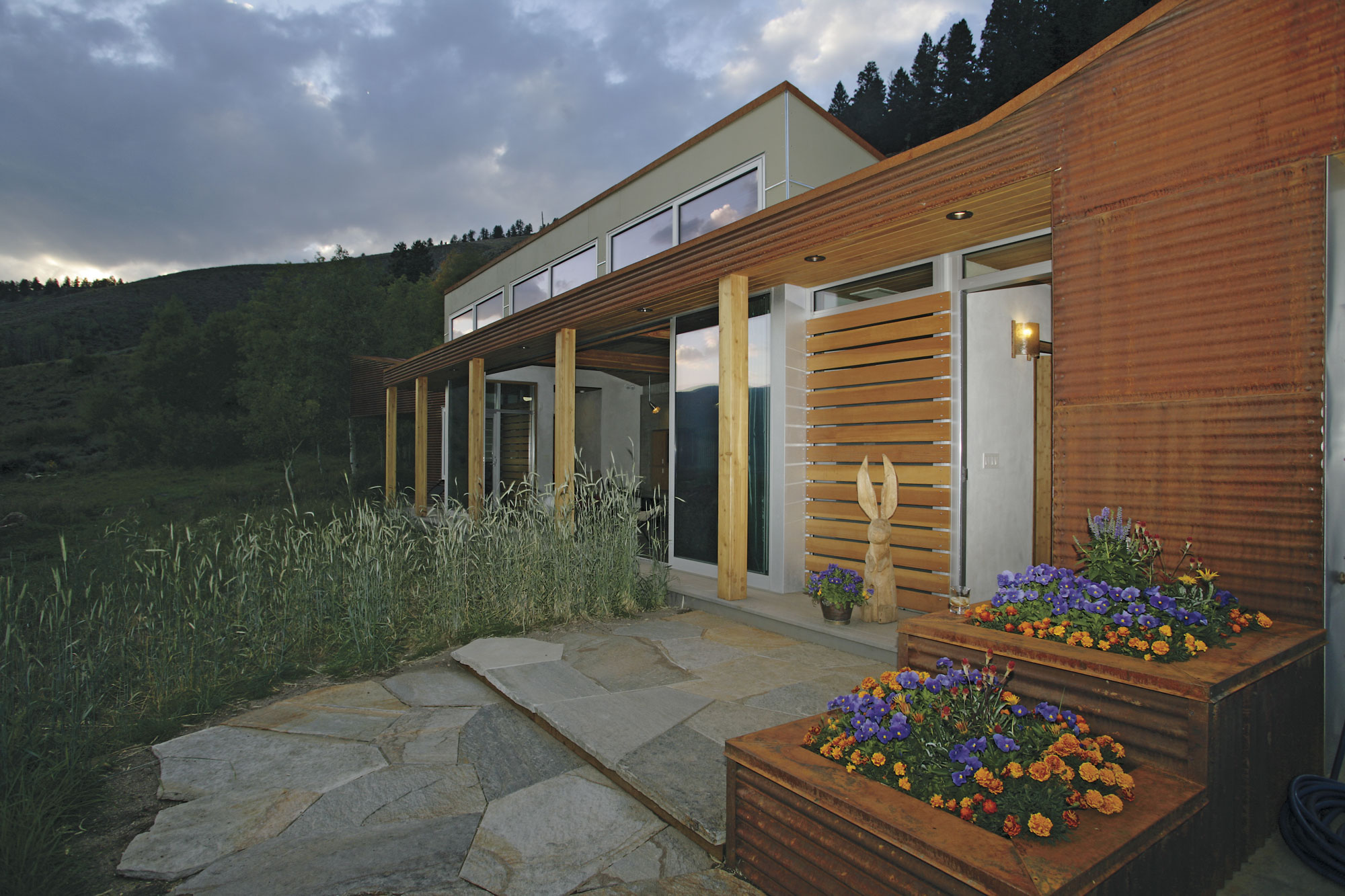 The exterior of the Norton residence, a project Teague describes as a “fun, interesting, green Colorado house.” 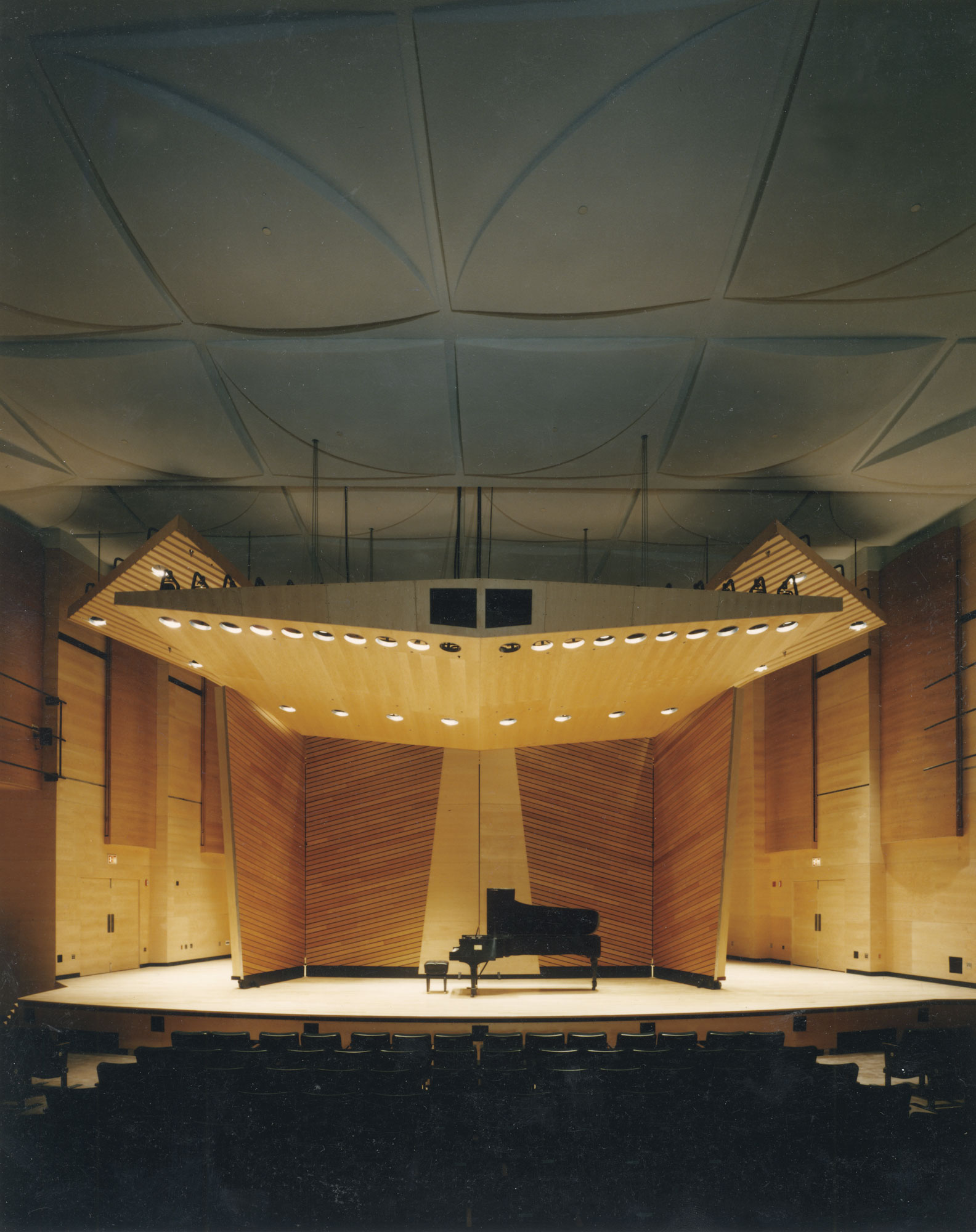 Harris Hall, home of the Aspen Music Festival, is revered for its sterling acoustical qualities. 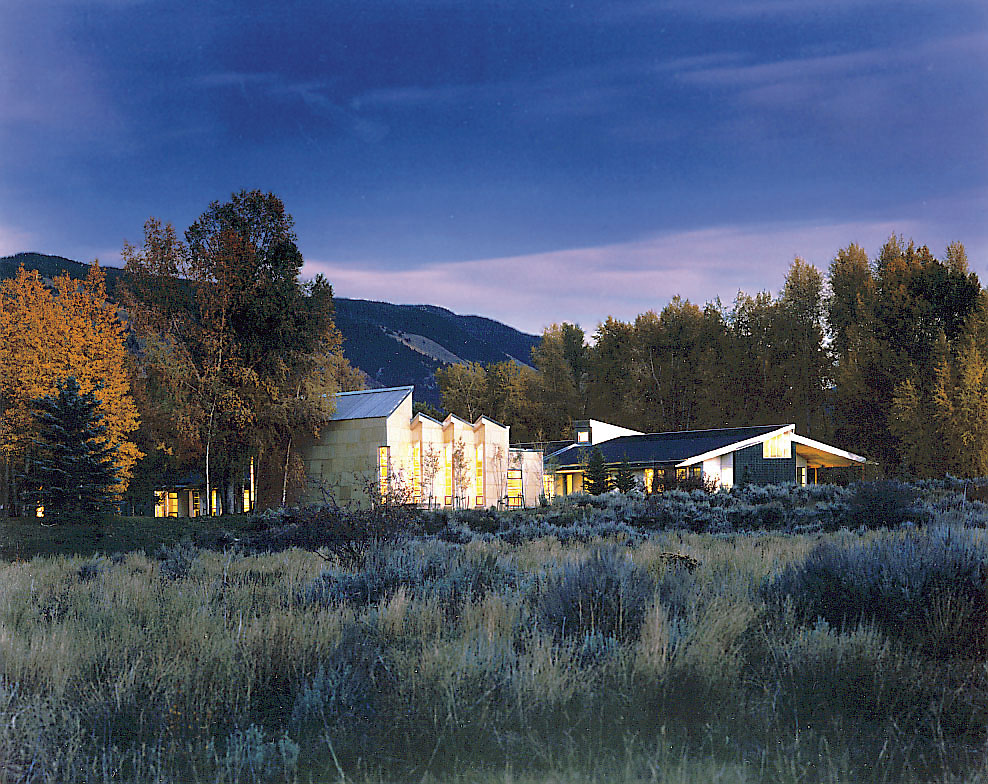 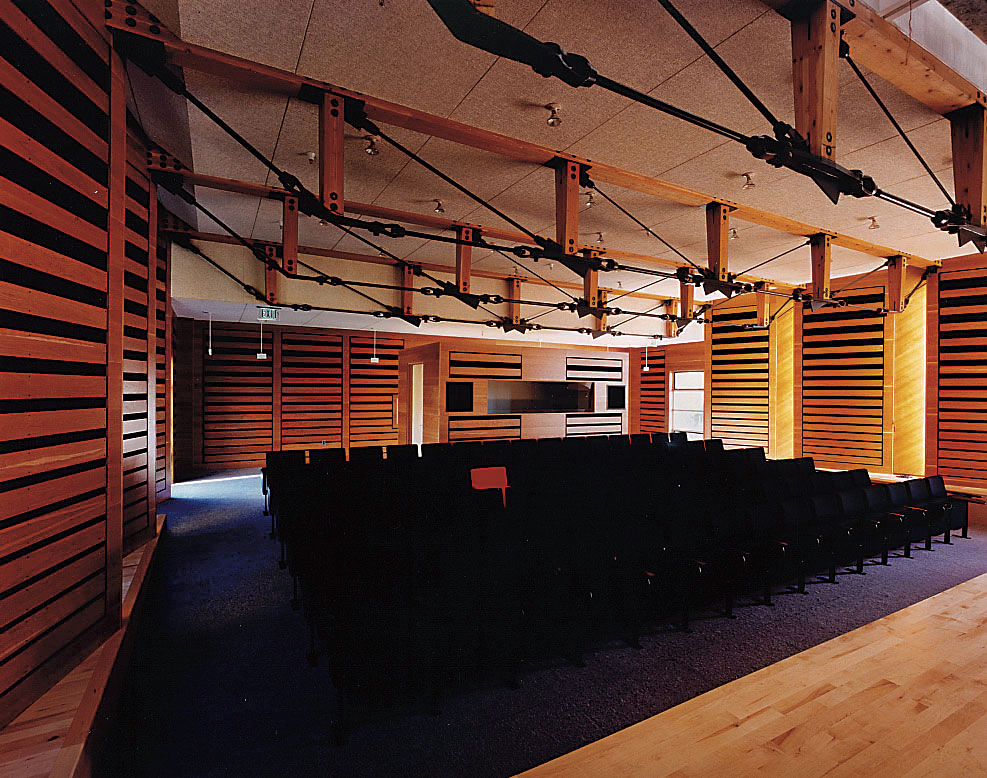 An interior meeting room at the Aspen Center for Physics 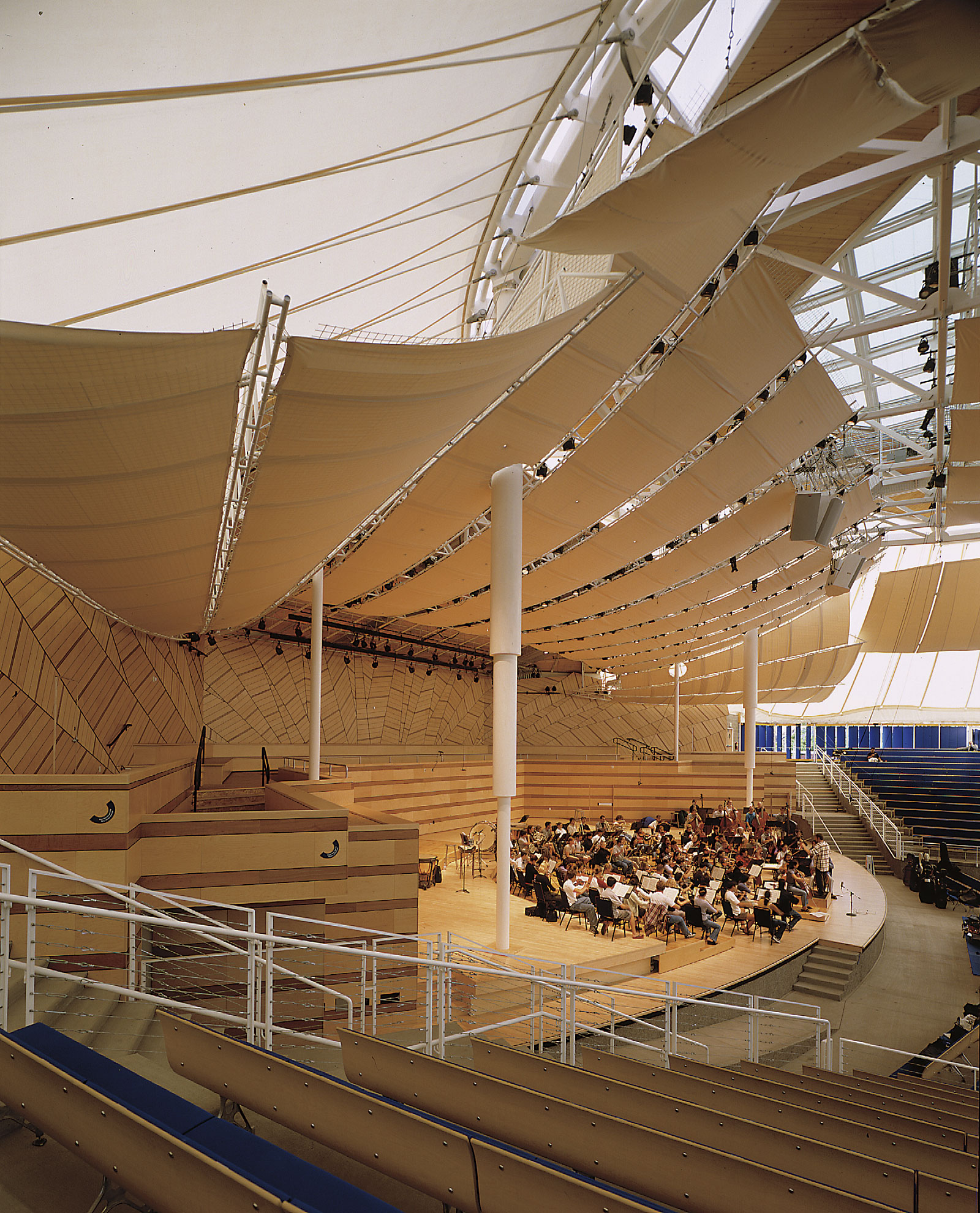 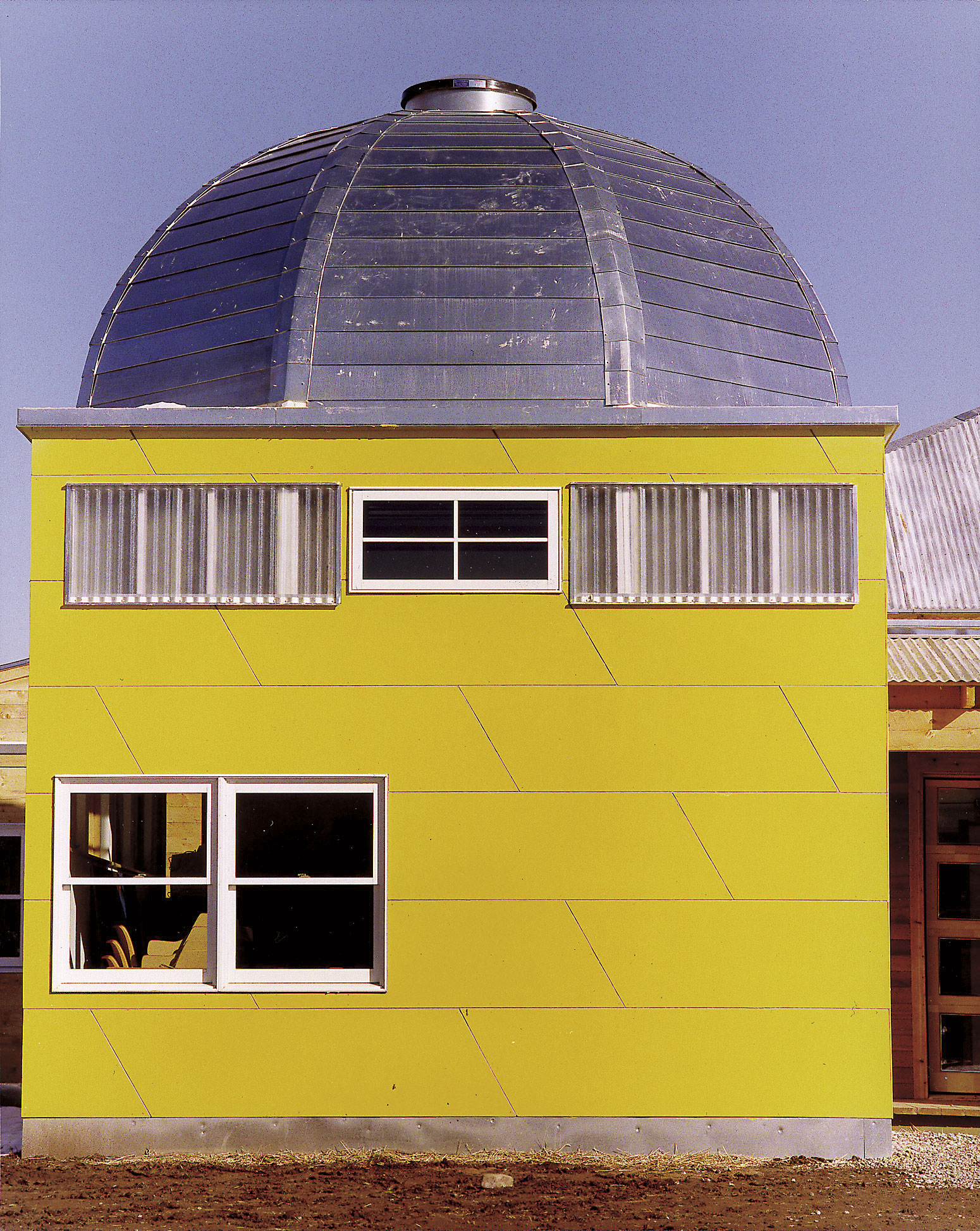 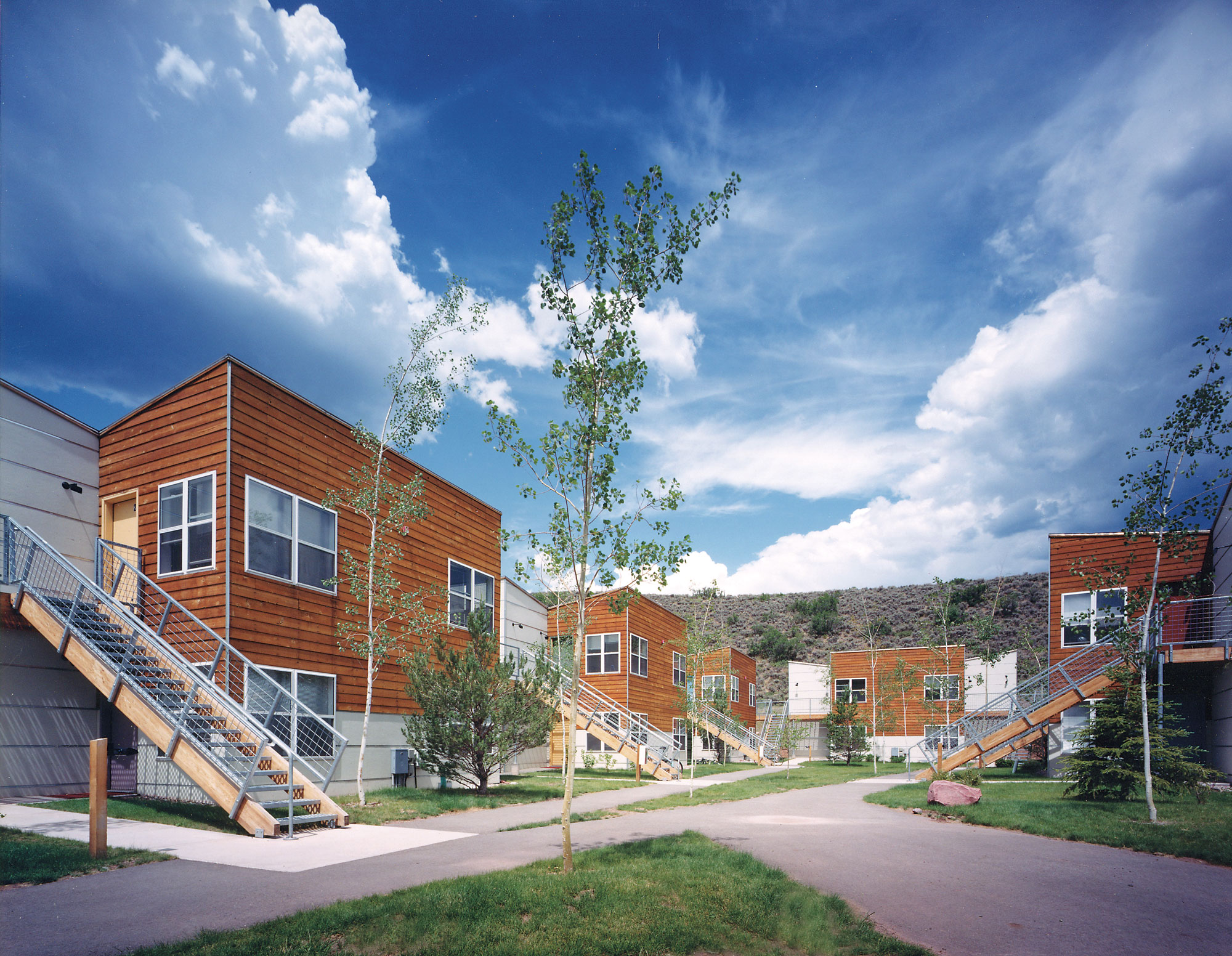 The Burlingame housing project is a series of affordable, multi-residential buildings that share abundant communal space.