01 Sep Rendering: Listening to the Land

“We start from the land, whether it’s a pristine rural lot or an urban project in town. Wherever it is, the site has something to tell us,” says Mitch Blake, a principal founder at Jackson, Wyoming’s Ward + Blake Architects. “And we listen.”

Since its founding with a handshake in 1996 by Blake and Tom Ward, the award-winning firm’s core philosophy has been simple: Start with the land. “We don’t like to work in a particular historical style because that doesn’t pay homage to the site,” Blake says. “You’re going in with a preconceived stylistic notion as opposed to looking at the site first and thinking about how things should be on there.”

It was this shared belief — as well as a respect for each other’s work — that led the two men to found Ward + Blake. They had both been working at another Jackson firm for several years and were ready to try something new, not that they knew they’d be doing it with each other. “We didn’t really know each other all that well when we started the office, but I had a real profound sense of the passion he had,” Ward says. Blake’s take? “I appreciated his design abilities and I knew we shared thoughts on what Western architecture ought to be. When Tom asked about partnering up, I didn’t have to think about it.”

The men named their new firm Ward + Blake “because ‘Blake + Ward’ sounded too much like ‘backward,’” laughs Blake.

The two men share a vision of Western architecture, but came to it from very different backgrounds. Ward, a Wyoming native who grew up taking family road trips and camping around the Greater Yellowstone ecosystem, spent several years in Arizona after graduating with his degree in architecture. Then he went to Manhattan for a decade, where he had his own firm. Blake arrived in Jackson after working as an architect in Salt Lake City. “I didn’t touch a stick of wood until I came to Jackson,” he says.

Of course, not everyone shares Ward and Blake’s ideas about Western architecture. “Personally, I’m an extremely non-confrontational person,” Ward says. “But my work tends to create confrontation and conflict.”

A home the firm designed for a five-acre lot atop an 8,000-foot butte between Jackson and Teton Village was the subject of the local homeowner’s association’s most contentious meeting. “I knew at the time we presented this house it would be an eyebrow raiser,” Ward says. Rather than politicking or pleading with the review board, Ward and his clients, a couple from New York, presented the home in purely rational terms.

“One reviewer noted there was a clause in the building covenant that says ‘the architecture should reflect the intrinsic values of the site,’” Ward says. “He realized this house does that in spades. I’ve never seen a whole review board do a 180. The next thing I knew, we had a building permit.”

Other homeowners in the area now bring guests and friends by the once contentious project to show it off. “We’ve done a few other houses up there equally uncliched; the review board gets it now,” Ward says.

In their time in the valley, Ward and Blake have seen this change … a bit. “Anyone attempting to do site-driven modern architecture in Jackson still has their work cut out for them,” Ward says. “There’s so much romance about the Old West in this place. But the average notion of what constitutes a great house or a meaningful building has changed.”

“Ideas Tom and I were talking about 20 years ago have gained more acceptance in the last five years,” Blake says.

For all the press and awards their own buildings have gotten — 12 awards, including four national ones and projects in more than 30 publications, including three books — Ward doesn’t give architects the credit. “It is the client’s expectations that have changed,” he says. “We and some other firms were fortunate enough to be here and be ready to take up the challenge and design the structures requested by the clients. It still required a lot of dialogue and discussion, but we were here and armed and ready.”

The owner who built the butte-top house told Architectural Digest, where the home was published in June 2006, “I think what [is generally] called Western architecture is what people who’ve seen a lot of Western movies imagine houses are supposed to look like. There are so many materials besides logs.”

“If you take a look at what the Old West really was, it was hardy and very elemental,” Ward says. “One hundred, 150 years ago, people were building structures to survive. They weren’t trying to create an environment or build a mannered home. They were putting something together so they wouldn’t die.”

Instead of logs, Ward + Blake might use glass, wood or flat expanses of concrete, as they did in the butte-top home. They might even use dirt. The firm worked for four years developing EarthWall, a patented, seismically stable, rammed-earth wall construction system. The first project in which they used EarthWall, Red Canyon Ranch outside of Lander, Wyoming, received an Honor Award from the AIA’s Western Mountain Region. The Ranch is an education facility and field lab for the Nature Conservancy.

Rather than heavy-timbered A-frames, Ward + Blake might do a flat roof planted with sod seeded with native vegetation. Blake asks, “What better way for a building to respond to where it’s built than if you use native plant materials as an integral part of the architecture?”

Ward adds, “It is a dynamic thing too, changing with the seasons and responsive to the weather. It moves when the wind blows, almost like a kinetic sculpture. To me it heightens the built environment. If your home is changing all the time, you can’t get jaded to it.” Just like the massive landscapes of the West.

Based just down the street from Ward + Blake in Jackson, Dina Mishev regularly writes for Sunset, AAA Via and Big Sky Journal, among other publications. She is also a host of Wyoming Chronicle on WY PBS. 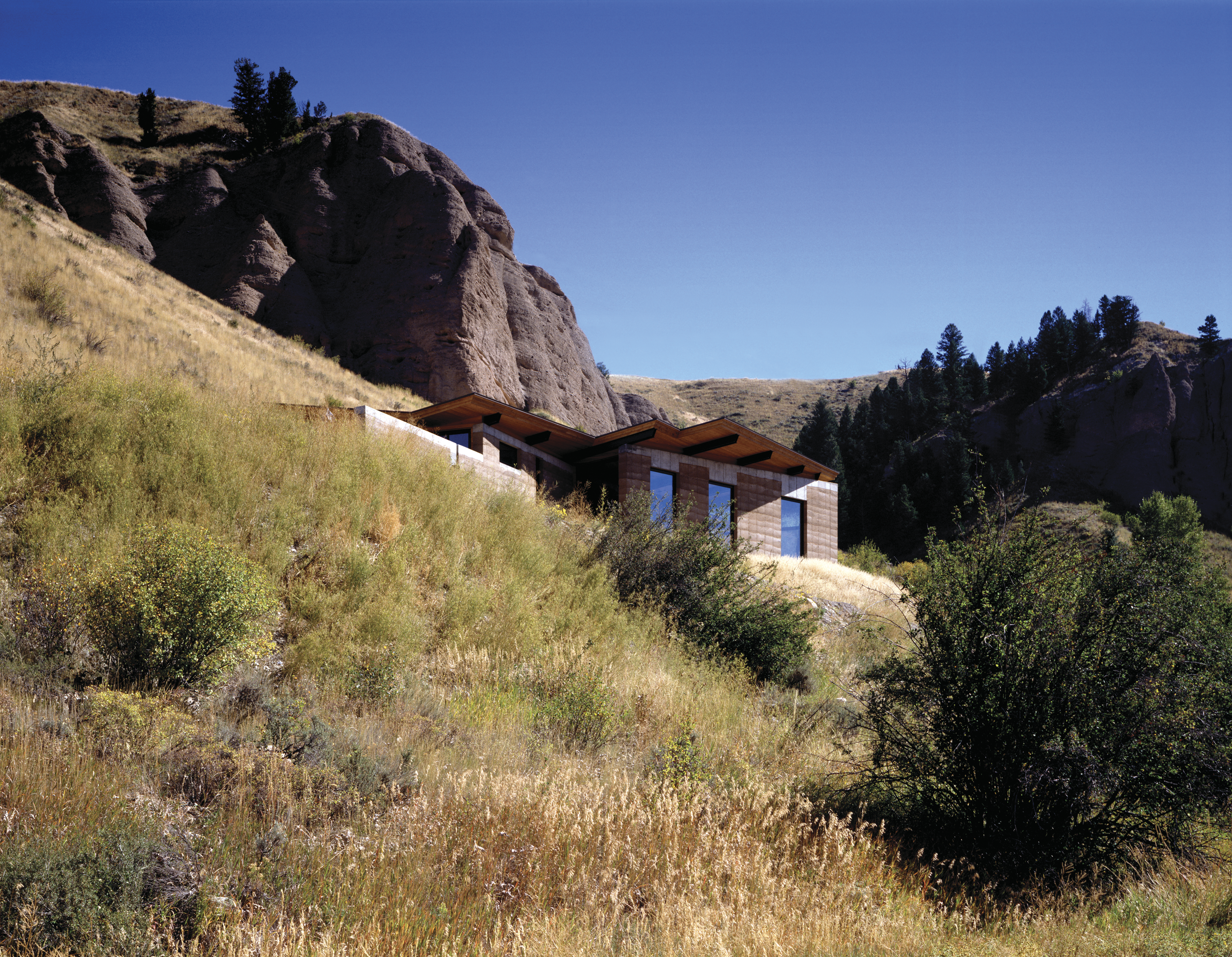 Perched on a hillside overlooking the Snake River, the TK Pad, Tom Ward’s own residence, was the first home built using EarthWall construction. 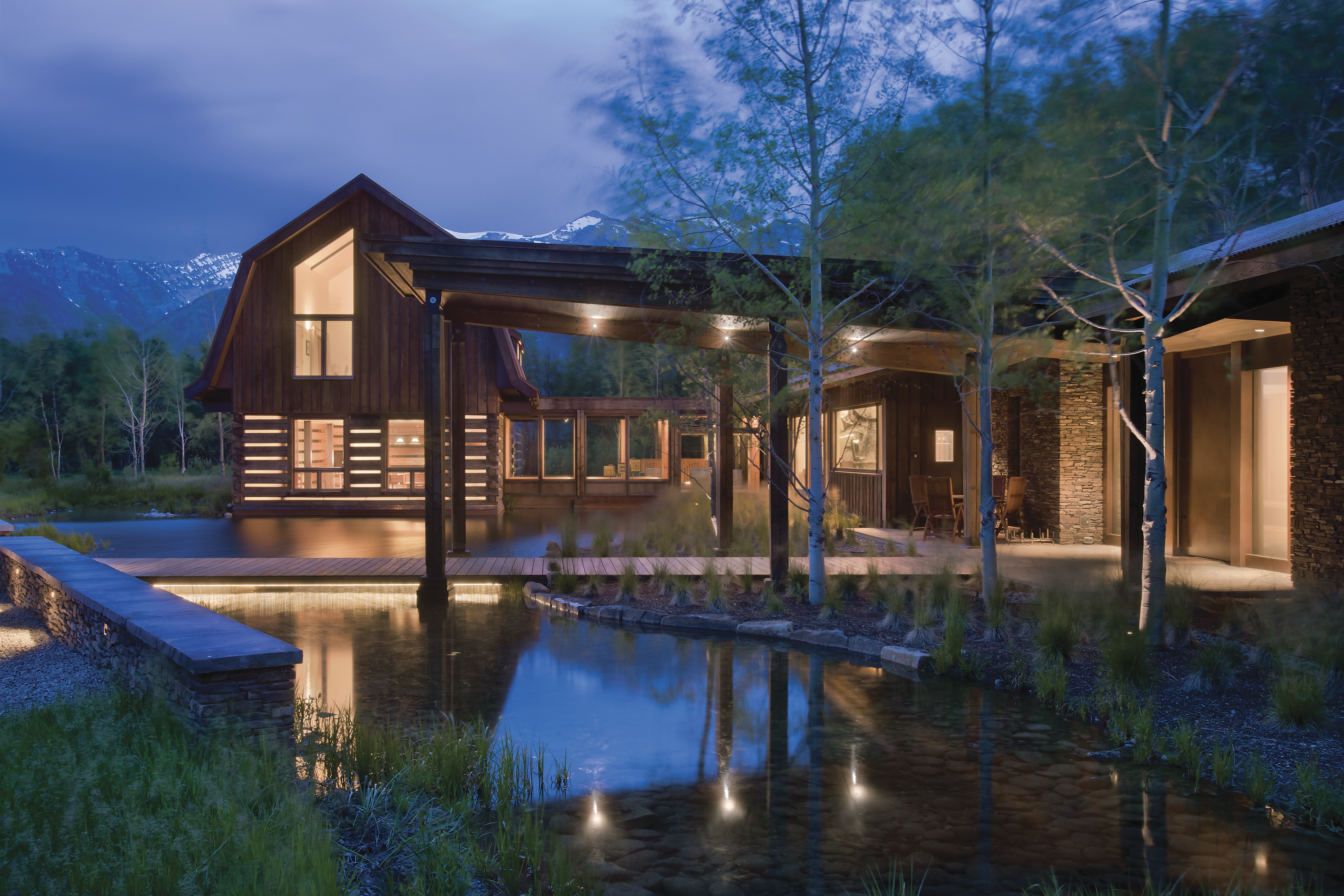 The layout and design of this residence for the EHA Family Trust was driven by the water on the property. Photo: Roger Wade 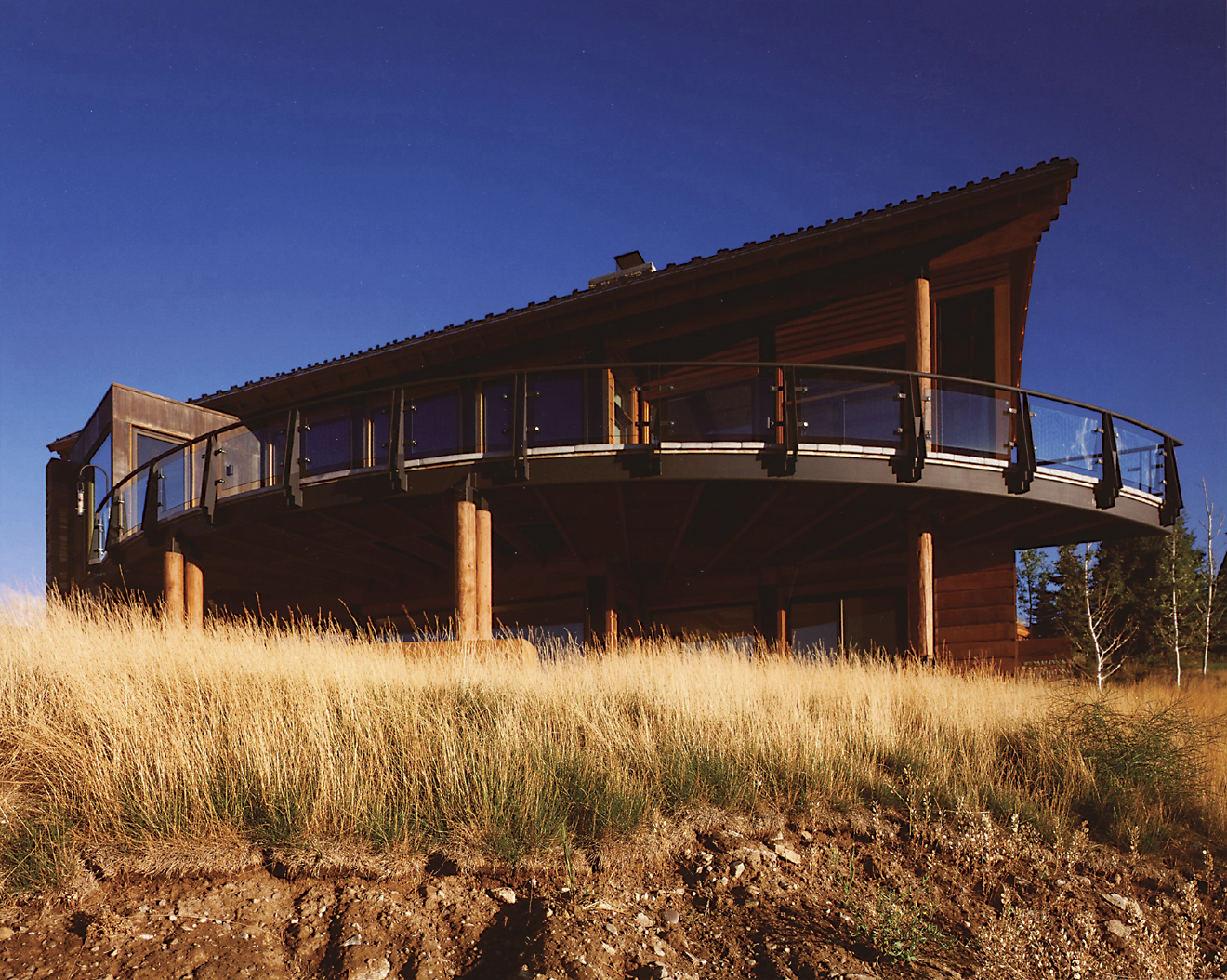 The Trout residence was built with skyline requirements and the owner’s interests in the West in mind. 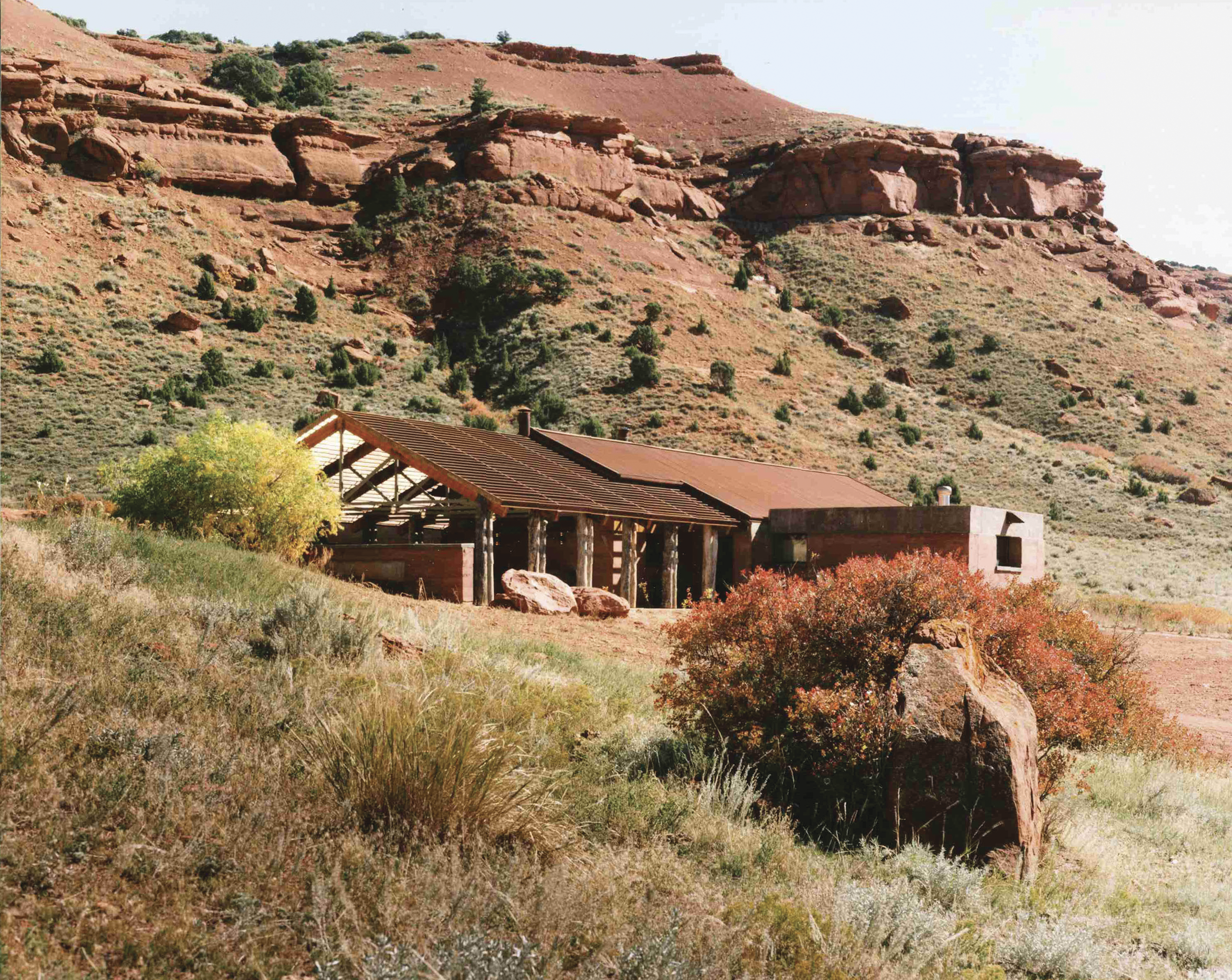