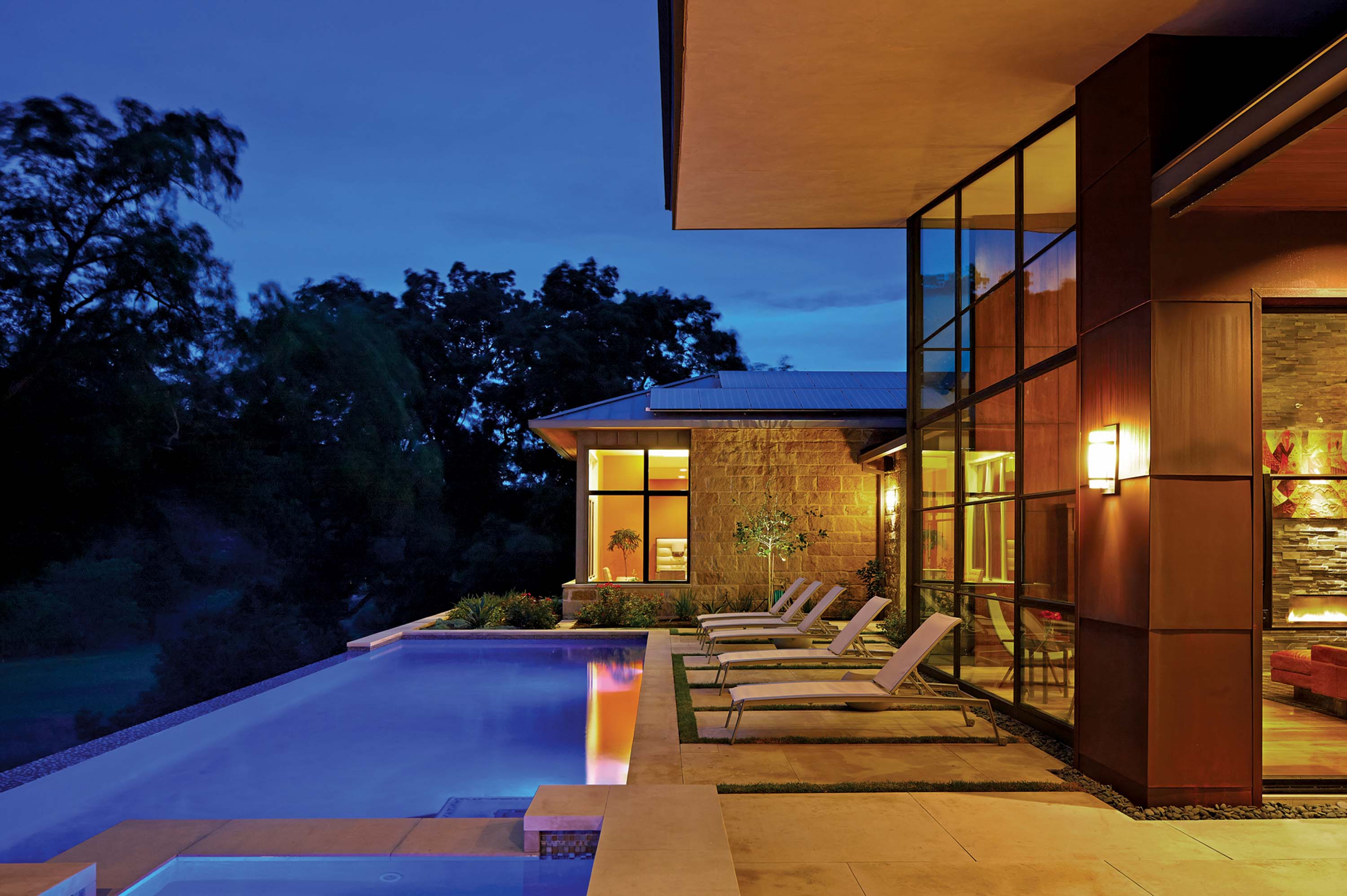 This house and pool are seamlessly connected thanks to floor-to-ceiling windows. big overhangs keep the house cool and offer shade to swimmers relaxing on chaise lounges. Lueders limestone slabs in front of the house are repeated on the patio.

28 May Rendering: The lay of the land

It’s no secret that James LaRue loves a challenge — he has the houses to prove it. Ever since the Austin – based architect started his own firm 26 years ago, LaRue has been amassing a body of work that reveals a skill few architects master: the ability to place a house in its landscape so it looks as if it belongs there. When good siting happens, it seems like magic at work. But the process is based on realities that are completely down to earth, and the craggy Hill Country topography is his taskmaster. LaRue has learned the lessons it has to teach and has developed the connoisseur’s skill at siting so well that it’s become his signature.

James LaRue’s affinity for the difficult landscape didn’t come from a lifetime of exposure to wild terrain. “My father worked for a regional utility company,” he says, “and we moved all around South Texas in the ’60s.”

The main thing to know about this vast region is that there are no mountains, not even a few hills — it’s brush country and coastal marshes. What it did have, says LaRue, were new subdivisions: “I spent a lot of time climbing around in houses under construction,” he says. In between scaling the rafters, the youngster would pull out his sketch – book and draw floorplans.

Nine years later, the architect – to – be enrolled in the College of Architecture at Texas A&M University. But when he graduated in 1979, Texas was in a devastating economic slump that brought new construction to a near halt: “It was one of the worst times to be an architect,” says LaRue. But it wasn’t the only one. Another recession came in 1989, after the savings and loan bust. “That was the year I started my firm,” he says.

Bad timing aside, the state’s economic misfortunes benefited LaRue. “I moved to Austin and started building houses,” he says. As a builder, LaRue survived in an economy where “architect” was a superfluous job description. Besides honing his expertise at construction, LaRue captured other

lessons: “The builder’s gift is to translate what the architect gives them.” Ever since, LaRue has made sure that what he gives builders comes through in translation. Eventually the economy improved and the architect opted for being an architect again. “It’s more fun to draw than stand in the sun,” he jokes. But the lessons remained. “It makes me really aware of what it takes to put a house on a site.”

LaRue obviously knows what it takes: His rock, steel, stucco and glass structures are based on geometries that answer to the rise and fall of the countryside. A recent project in the Austin hills incorporates the topography, both as a backdrop as well as a component of the three – story limestone and steel house. At 8,000 square feet, the house could have overwhelmed its setting. The fact that the homeowners also wanted a seven – car garage didn’t help.

LaRue’s solution was to excavate into the hillside where he embedded utilitarian car storage. The visitor is directed toward the house via a curving wall that conceals the motor court. Inside, vast expanses of glass take in the view of Texas Hill Country, its silhouette repeated in the pitch of the building’s three shed roofs.

Sometimes, though, the view isn’t that good. “There was nothing redeeming about the site,” says LaRue about a lakeside setting for a 3,600 – square – foot limestone house and its 700 – square – foot guesthouse. Next to it is a huge drainage ditch; a big house looms on the other side. Across the lake, though, is a nature preserve, which LaRue capitalized on. A double – height, steel – gridded window wall in the living room frames the stunning panorama. “We created a gorgeous setting,” he says. Serving as an organizing axis, central dogtrot extends from one courtyard to another, LaRue’s remedy for adjacent bad views.

It seems that the word has now spread. When a Dallas couple with a complicated pie – shaped lot started thinking about building a house, they looked to LaRue. He was the only architect they thought could fit a house, a guesthouse and a 25 – meter lap pool into their ever – narrowing site ending at a lake. The result? A modern wood, rock and glass dwelling for a gregarious couple that entertains often.

“I created lots of opportunity for social engagement,” the architect says about his approachable design. Outside the welcoming 20 – square – foot entry, stairs leading down from the terrace are extra wide to accommodate an impromptu sit – down, and the pool’s coping is an extra 18 inches deep, roomy enough for 80 people to get comfortable. For the view, LaRue counted on the lake to be the focus of house and terraces. To make sure the vista wasn’t spoiled by the guesthouse’s prominent roof, the architect specified grass instead of the usual galvanized metal. It’s a verdant topping that invites delight, whether you are considering the landscape or the architecture.

And if you are doing both, you are also appreciating the value of siting, a gift that James LaRue can call his own. 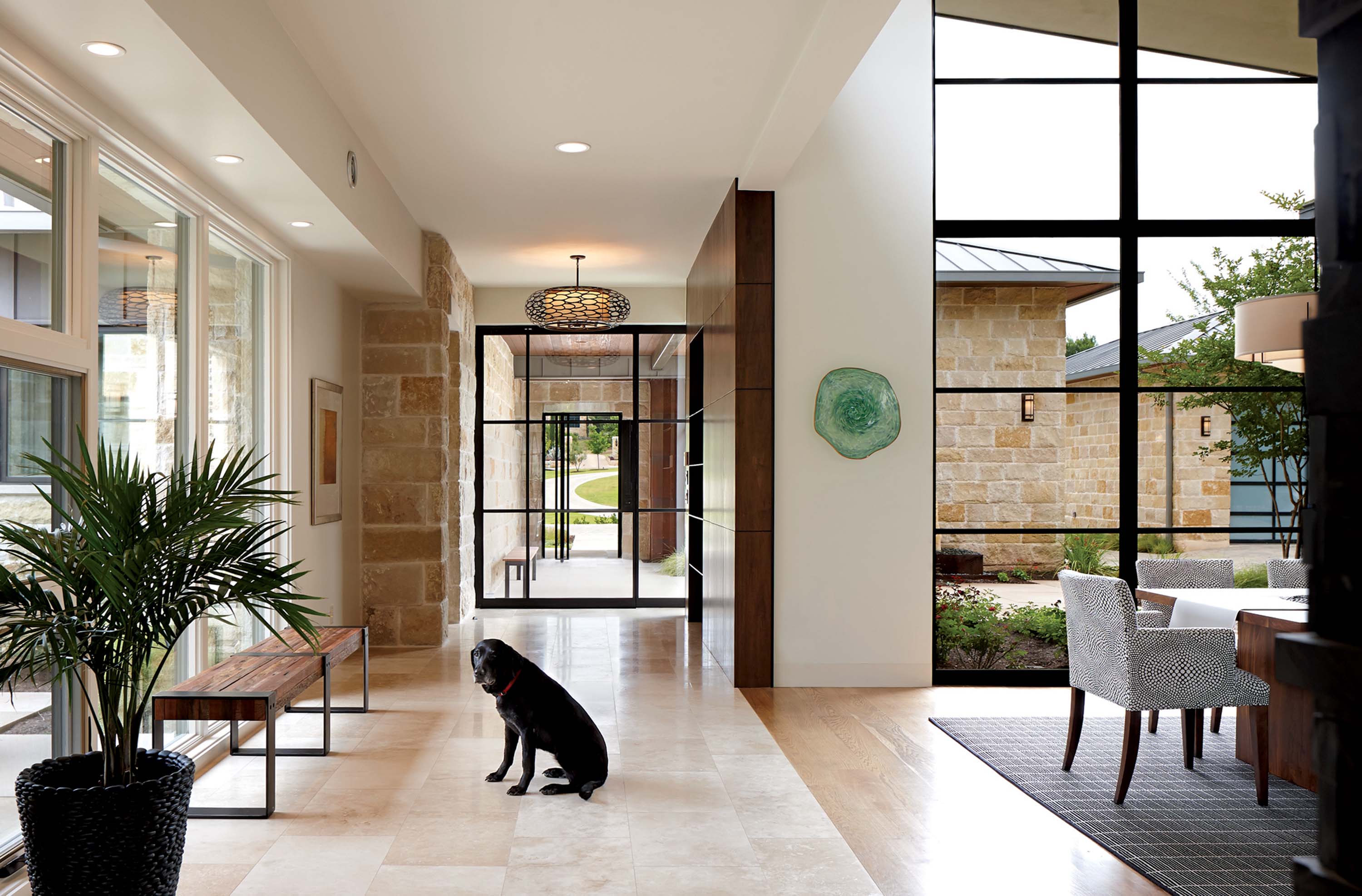 The house is connected by steel – gridded Portella doors and windows. the entry floor is travertine, a cool spot for the family dog. 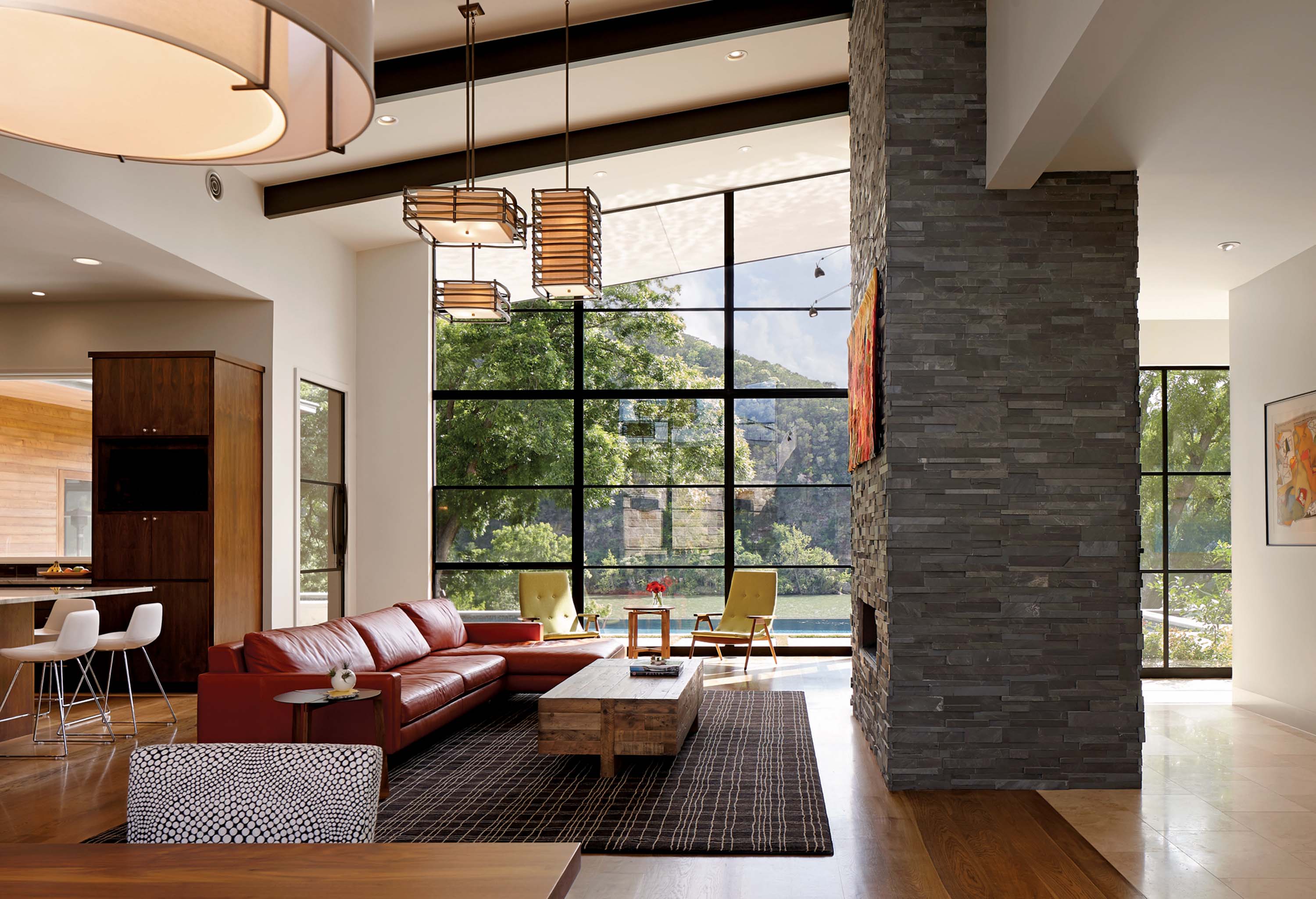 White oak floors connect living and dining areas and are a dramatic contrast to the slate fireplace and chimney. 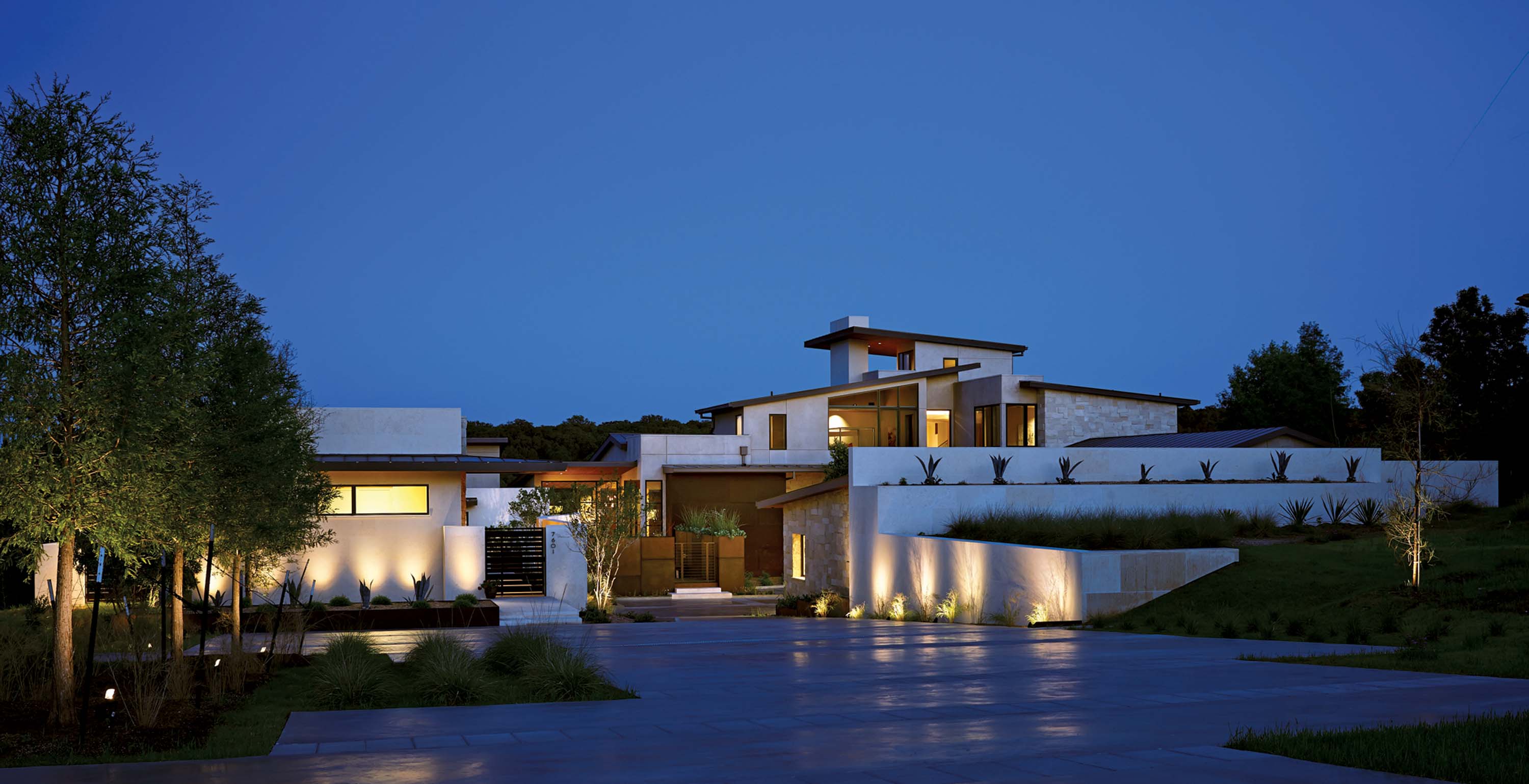 With the help of landscape architect Curt Arnette, of sitio Design, LaRue incorporated the topography into the house, actually embedding the structure into the hillside. the low profile allows for courtyards and gardens in the front of the dwelling and a pool in back, and also for a rooftop retreat from which to enjoy the Hill Country views. 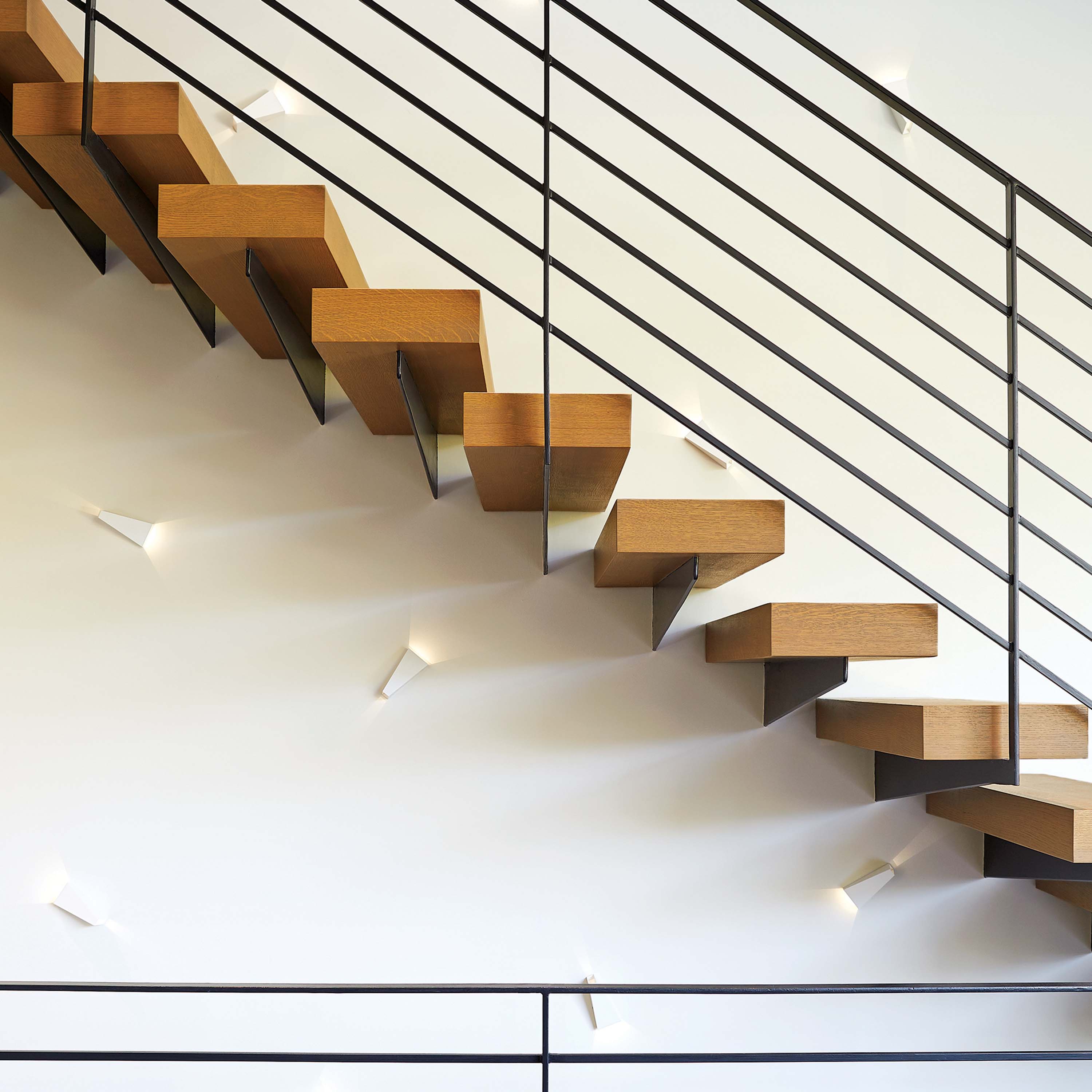 The homeowners have an extensive collection of Modern art, but the topix Delta lights under the staircase, while artful, are from Scott & Cooner and are strictly for lighting the way. 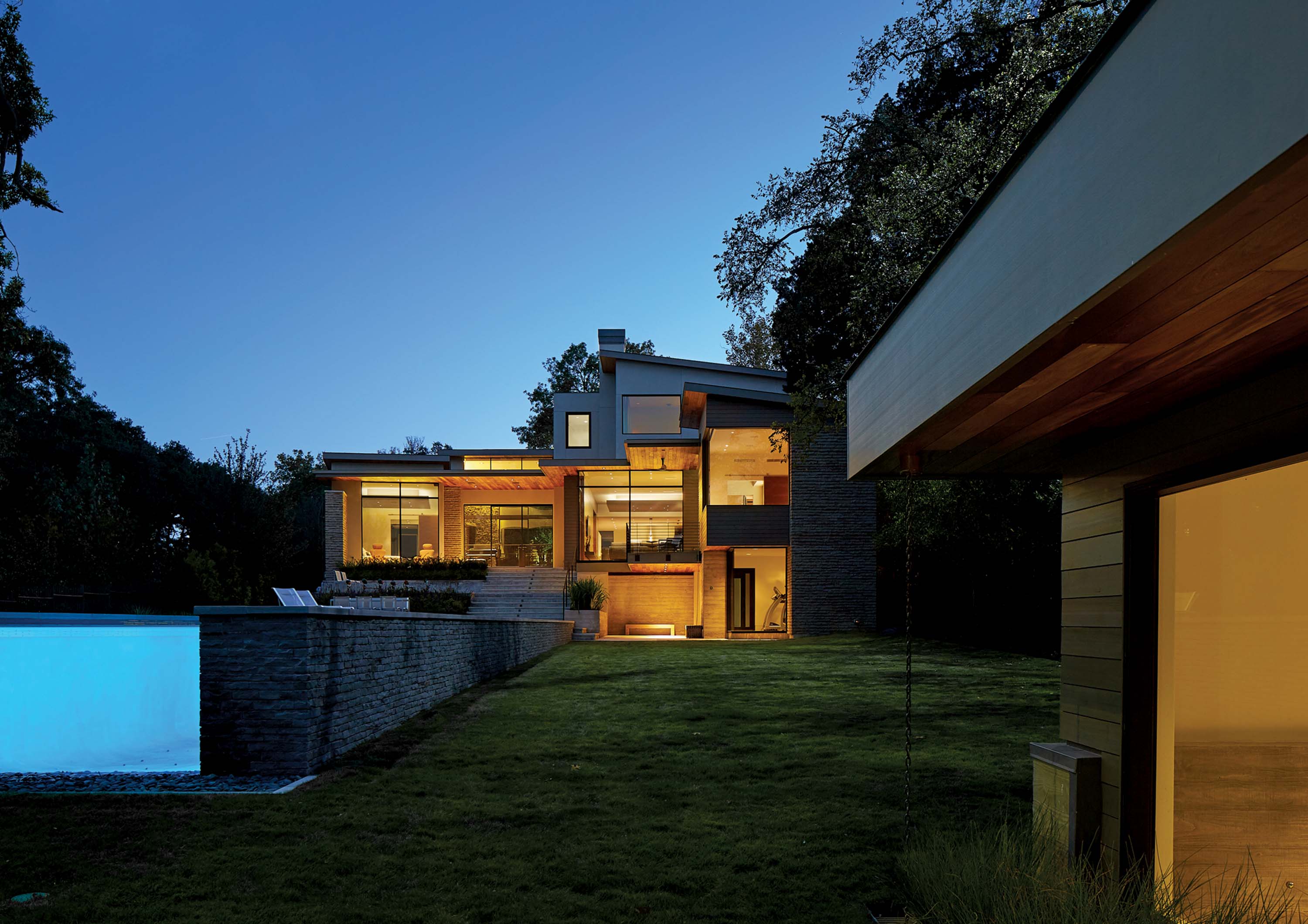 Board-formed concrete, metal railings, and rock and wood siding establish the house’s strong horizontal lines against the hilly site, but the real view is into the pool with its transparent acrylic panel at the end. 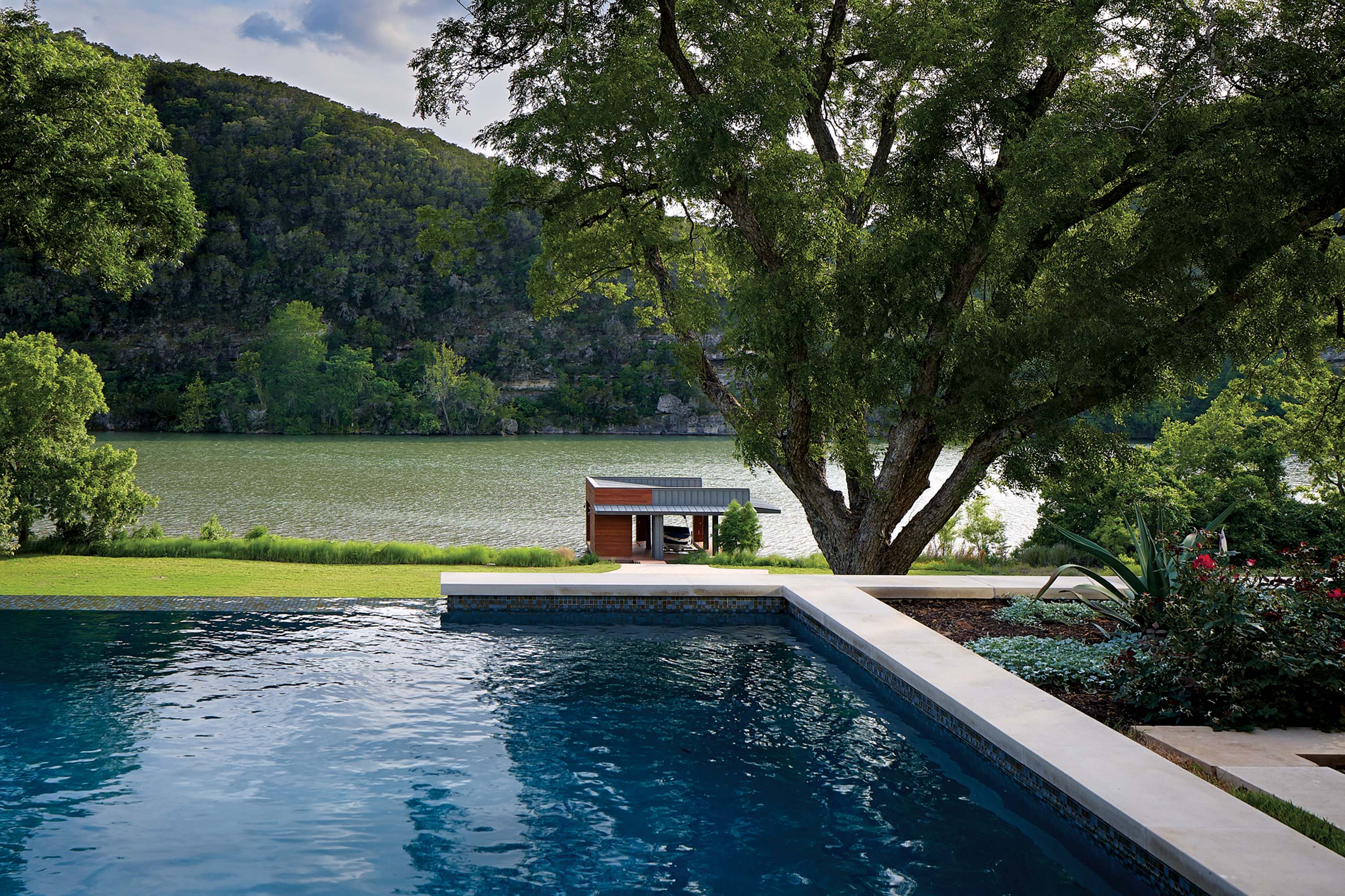 Landscape designers tim benton and Ramon suarez, of Land Restoration, fashioned a layered view from the infinity – edge pool by Austin water Designs. Architect LaRue used the same elements that are in the house — galvanized metal and antique Lueders limestone — for the boat dock. 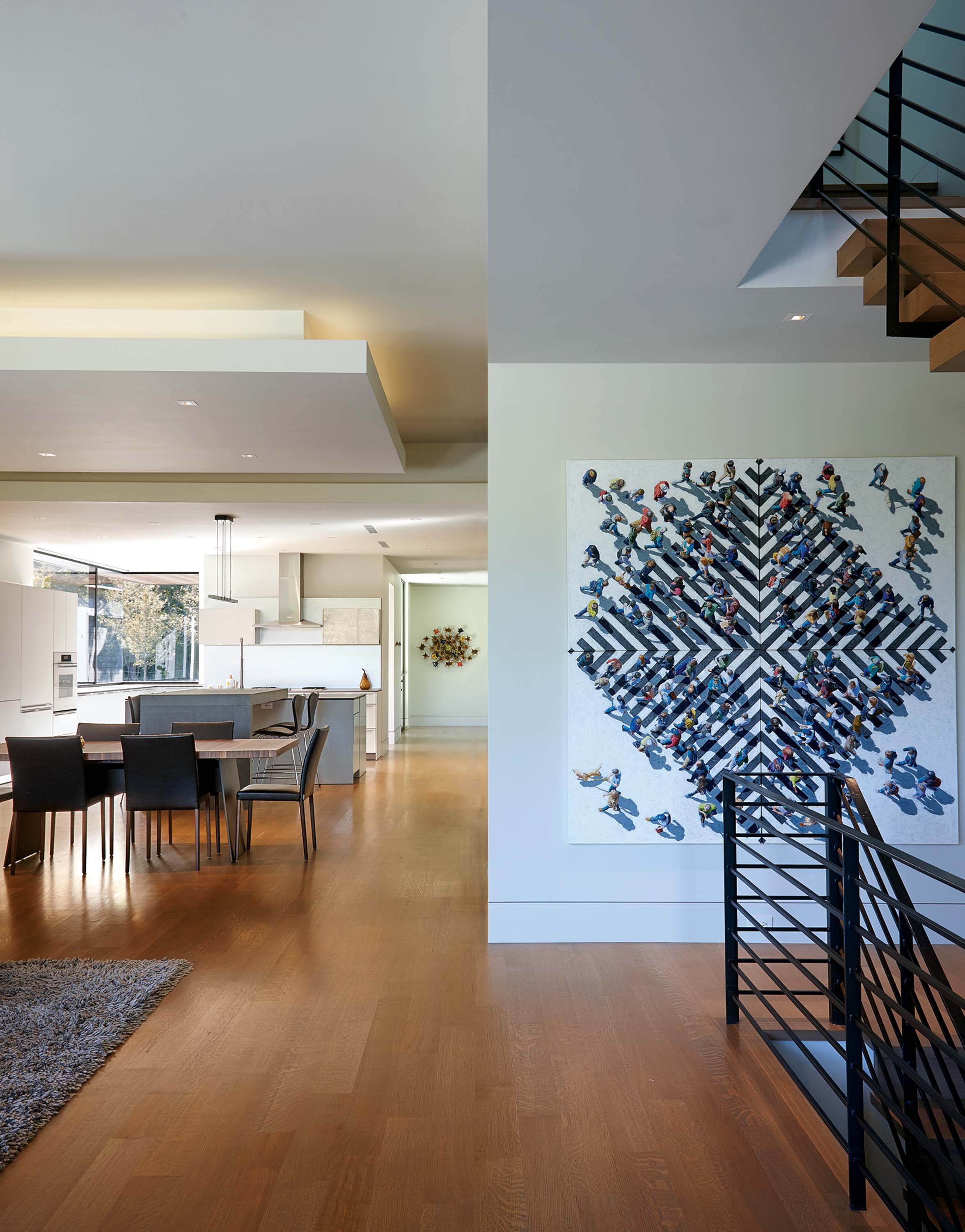