The panoramic view of the Grand Canyon from El Tovar is unmatched.

“In the Grand Canyon, Arizona has a natural wonder which, so far as I know, is in kind absolutely unparalleled throughout the rest of the world,” said President Theodore Roosevelt in 1903 during a visit to the Grand Canyon.

Known as the grandfather of our national parks, Roosevelt loved the Grand Canyon and was a visitor at El Tovar Hotel, built on the South Rim just feet away from the edge of the Canyon. It is said that the private dining room, rich with its dark paneling, was built specifically for President Roosevelt. A hiker and a lover of nature, he was known to come into the hotel from a day spent outdoors — dusty, sometimes muddy and inappropriately dressed for the luxurious El Tovar Hotel dining room.

Whether this is true or just myth, El Tovar was known in the early 1900s for its elegant dining, complete with an Italian chef and enormous cold storage rooms holding imported cheeses, Pacific salmon and California fruit. A herd of Jersey cows and a poultry farm provided fresh milk, butter and eggs, all of which added to the luxury offered at this remote locale. The restaurant was operated by the Fred Harvey Company, which is credited with starting the first restaurant chain in the United States, and the well-known “Harvey Girls” offered service with a smile.

Charles Frederick Whittlesey, the architect behind El Tovar, was a child prodigy, studying architecture and engineering at 16 years of age. For 30 years he designed commercial buildings in Chicago before moving to Albuquerque, New Mexico, as staff architect for the Santa Fe Railway. Later, he would settle in San Francisco after the great earthquake of 1906, making a name for himself by building the notable Pacific Building with reinforced concrete.

Whittlesey designed El Tovar in the period between the popularity of Victorian resort architecture and what would later become the accepted rustic architecture of our national park hotels, known as “parkitecture.” In a mixture of architectural styles — part Swiss chalet, part hunting lodge and part Wild West — El Tovar was built with a wood frame, its ground floor constructed with log slab siding, its corners notched, giving the appearance of a log lodge.

Architecturally, the building is full of appeal with multiple roof levels, and at its uppermost level, a wood turret, wrapped in shingles, has become the most identifiable design element of El Tovar.

Today, visitors to El Tovar still marvel at its architecture and ambiance. While the interiors have been updated, the hotel remains much as it was built in 1905. From its porches, guests can watch the sunrises and sunsets, or get a glimpse of the elk that like to graze on the manicured lawn. Trailheads leading down into the canyon are close by, as is architect Mary Jane Colter’s Hopi House.

Theodore Roosevelt stayed at El Tovar in 1913. In writing about his experience, he recalled, “Our party gathered at the comfortable El Tovar Hotel, on the edge of the Grand Canyon of the Colorado. The dawn and the evening twilight were brooding mysteries over the dusk of the abyss; night shrouded its immensity, but did not hide it; and to none of the sons of men is it given to tell of the wonder and splendor of sunrise and sunset in the Grand Canyon of the Colorado.” 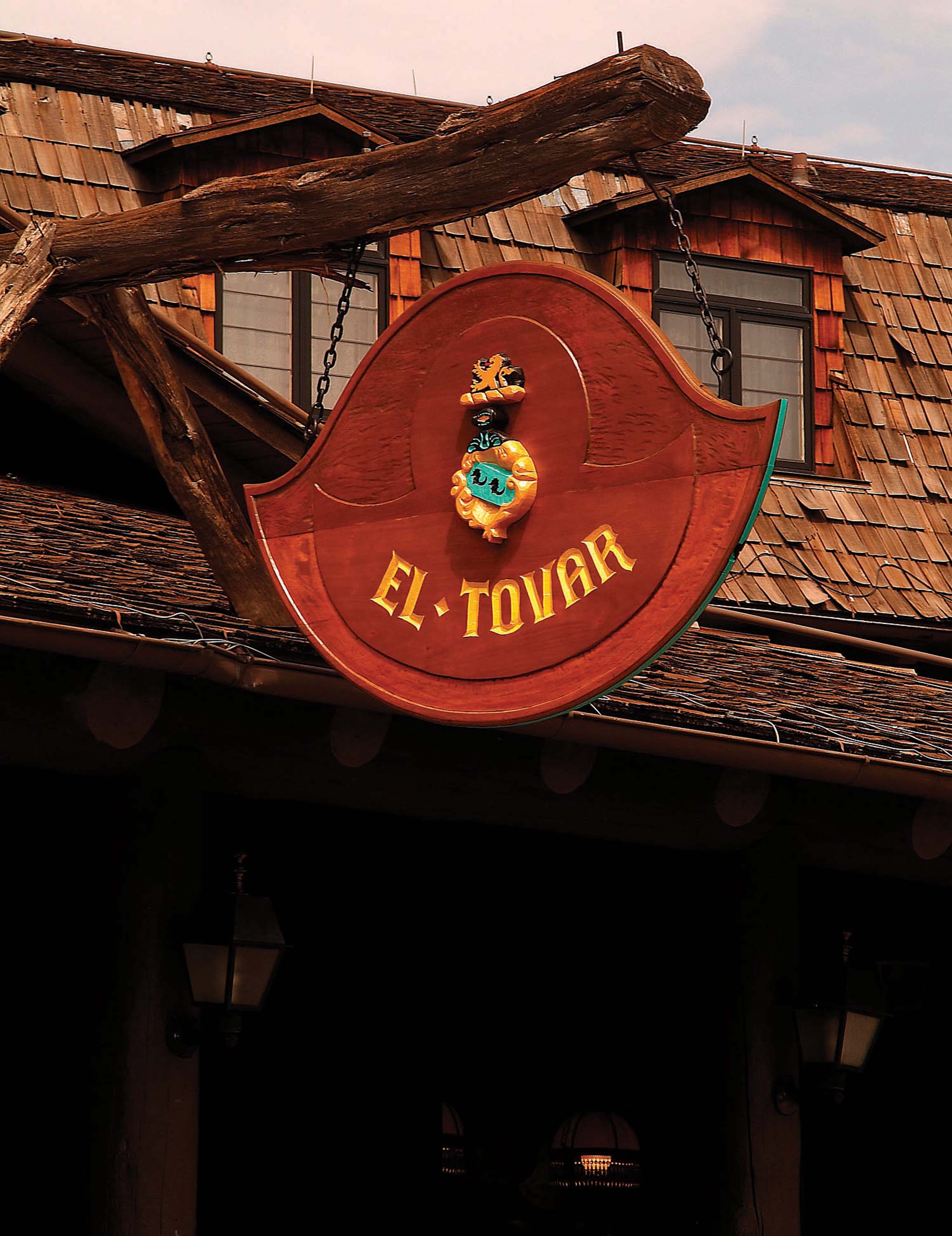 Although El Tovar Hotel has been updated since it was built in 1905, the sign that hangs above its entrance remains the same. 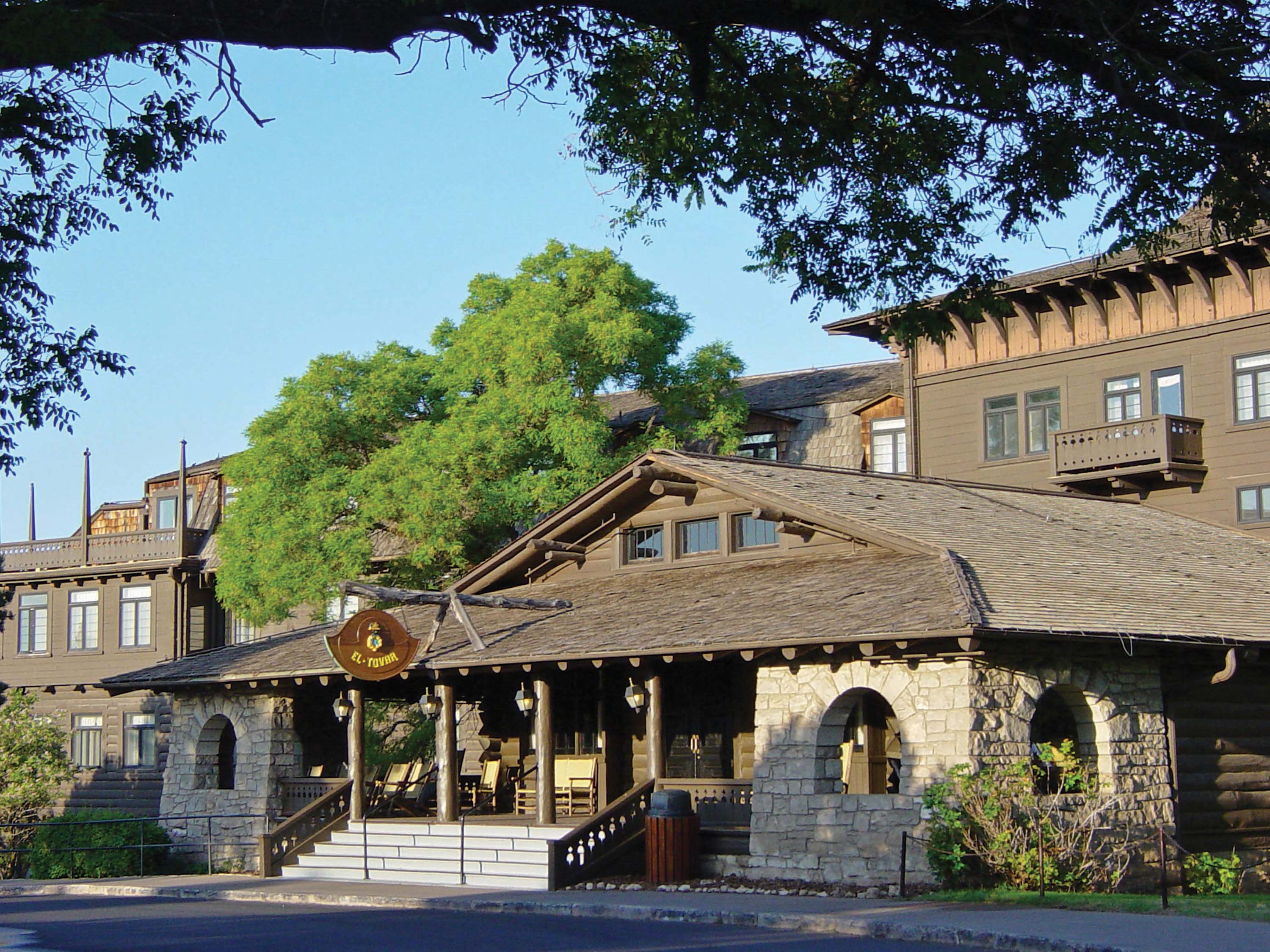 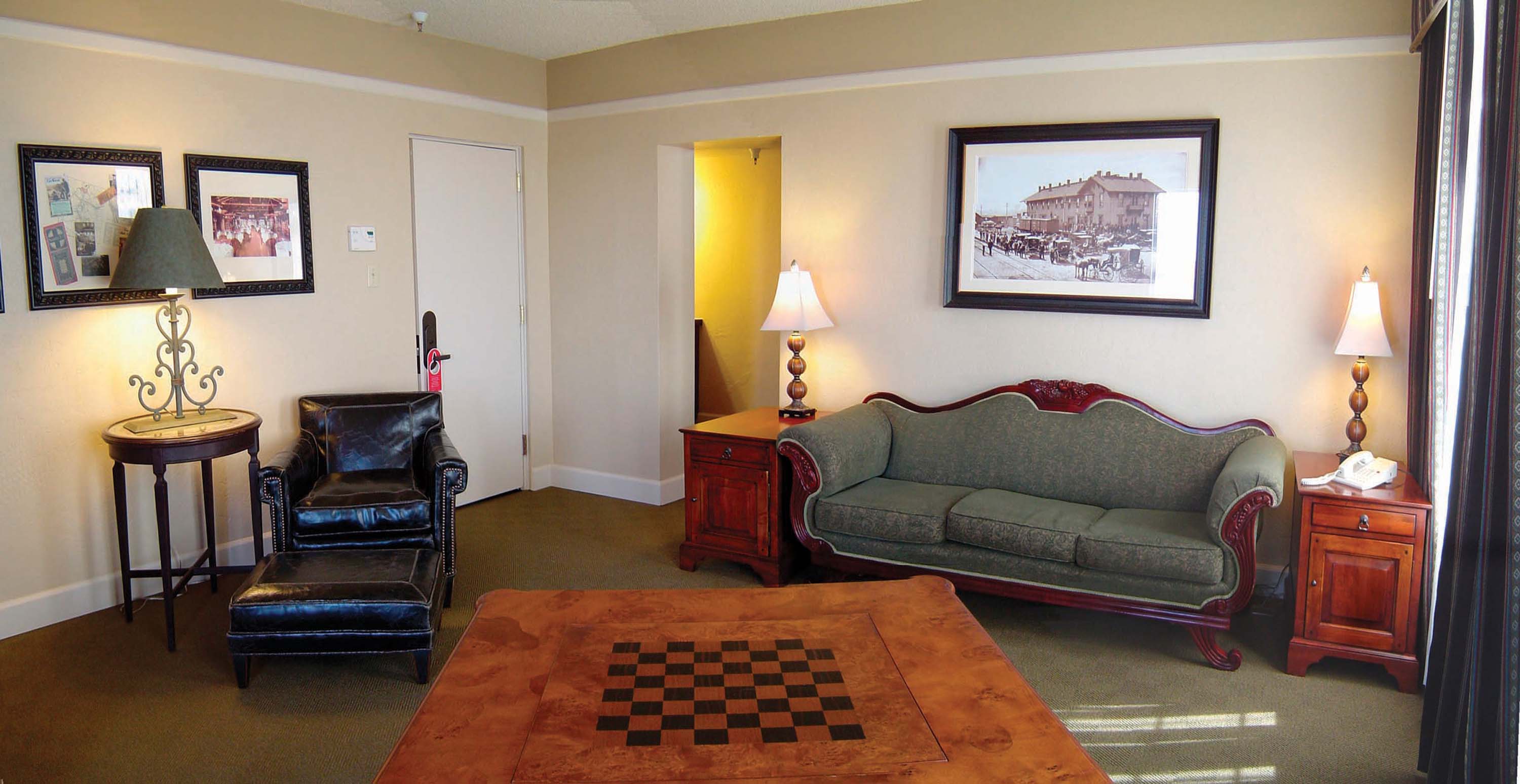 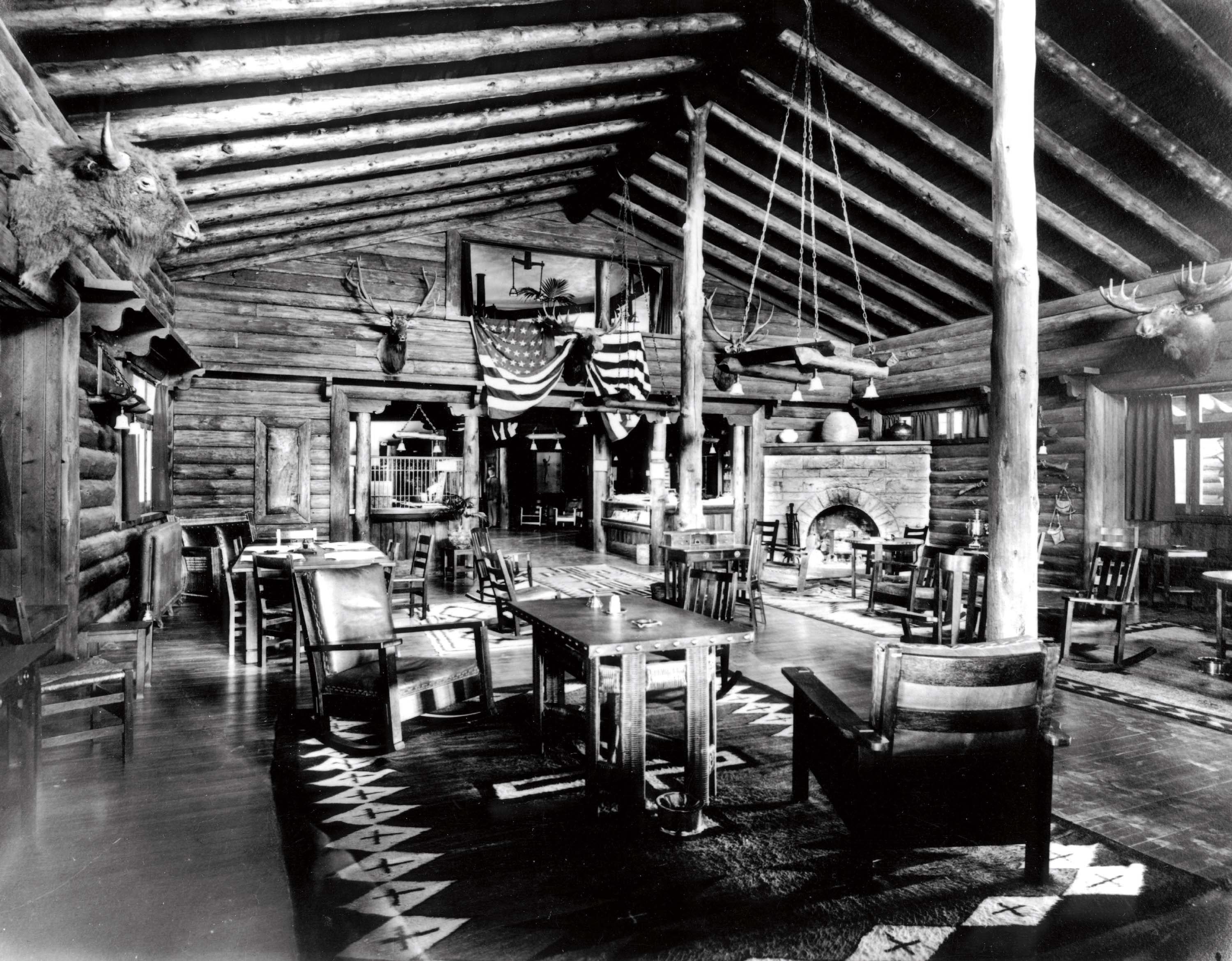 The entrance lobby was known as the “Rendezvous Room” in 1906; more than a century later, it retains its dark, woodsy character. 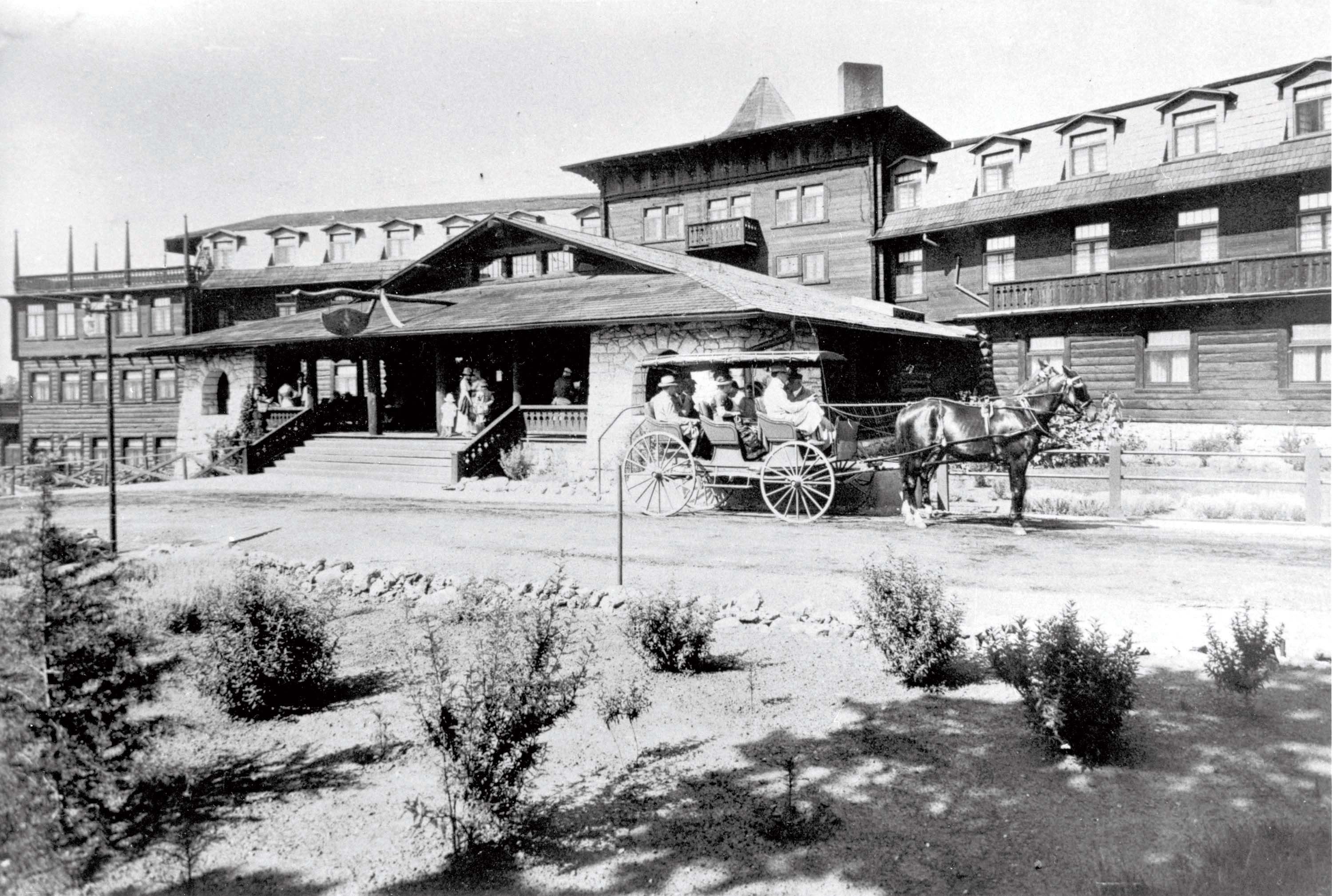 While guests arrived by train in 1906, when this photo was taken, the two-horse carriage was used to transport visitors to view the different overlooks of the Grand Canyon.