Gateway to the vinicultural Willamette Valley and gallery of Oregonian artwork, the Allison Inn looks out over proprietary pinot noir and pinot gris vineyards.

Today, where the four-level inn serves as a gateway to Oregon’s famed wine country, ice-age Missoula Floods once laid down rich volcanic topsoil from what is now Montana and Washington, forming ancient Lake Allison.

Nurtured over millennia, this fertile lakebed — 400 feet deep in places — has produced one of the world’s premier vinicultural areas, renowned, in particular, for earthy, deeply textured pinot noirs, available at many of its 200 plus vineyards.

Less than an hour from Portland, the Austins dutifully sculpted The Allison’s 35 acres to respect the original land, with deciduous and conifer trees, farmland and seven acres of pinot noir and pinot gris vineyards. In the distance, Parrett Mountain, the Chehalem Mountains and the Dundee Hills are landmarks. Even the inn’s structure incorporates locally sourced materials including stone and wood.

For guests and visitors, inside and out, 500 pieces of original artwork — including six commissioned pieces — showcase the work of 100 Oregon artists. The collection is curated by the Austins’ daughter, Loni Parrish, who owns the nearby Art Elements Gallery in the quaint town of Newberg, the adolescent home of President Herbert Hoover.

Art has always been a family affair at The Allison. Before her death in 2013, Joan Austin, a beloved and respected businesswoman and philanthropist, was behind the decision to fill the inn with Oregon art. That ‘artistic expression,’ says the inn’s Linda Bruno, is very much alive and can be seen in everything from the artworks to the cuisine and wine pairings at JORY, the inn’s restaurant and bar, and in the furnishings, some of them handmade by the Austins’ son, Ken Austin, Jr. He painstakingly crafted the trestle-style private dining table from a piece of black walnut, as well as the chestnut dining tables at the Allison’s exhibition-style JORY, overseen by Executive Chef Sunny Jin. The restaurant name recalls one of the ancient soils in the Willamette Valley foothills.

Working also in for maple and other fallen woods harvested from his home near the inn, Austin labors with traditional finesse, cutting mortise-and-tenon connections and butterfly joints, the latter often in contrasting wood to the structure they connect. He also created the notecard boxes in each of the rooms, where guests can read a 107-page book cataloguing the property’s artworks.

In the foyer of the 15,000-square-foot Allison Spa, patrons experience Mark Terry’s Nymphaeus #32, a torso recalling an ancient river god and celebrating the spa’s comforting water features and the area’s lacustrine past. Using a 2,000-year-old process called anagrama, Terry fires his unique “ply-clay” in an outdoor stone kiln to 2,500 degrees Fahrenheit, which recreates the look and luster of classic Greek statuary.

In the reception lobby of the inn are James Frey’s Elements series, which the artist and winemaker synthesizes using acrylics and native materials such as soils, branch cuttings and skins from the Pinot Noir grapes. The result is tactility and rich color — browns, purples, oranges, crimsons — honoring the area’s rolling hills and earthen palette.

Also with his artistic hands in the earth, Oregon State University scientist and professor Jay Noller mixes native soils with acrylics for works such as Slackwater Terroir, an artistic timepiece tracing the spot where it hangs back 15,000 years, when the fertile floods began. 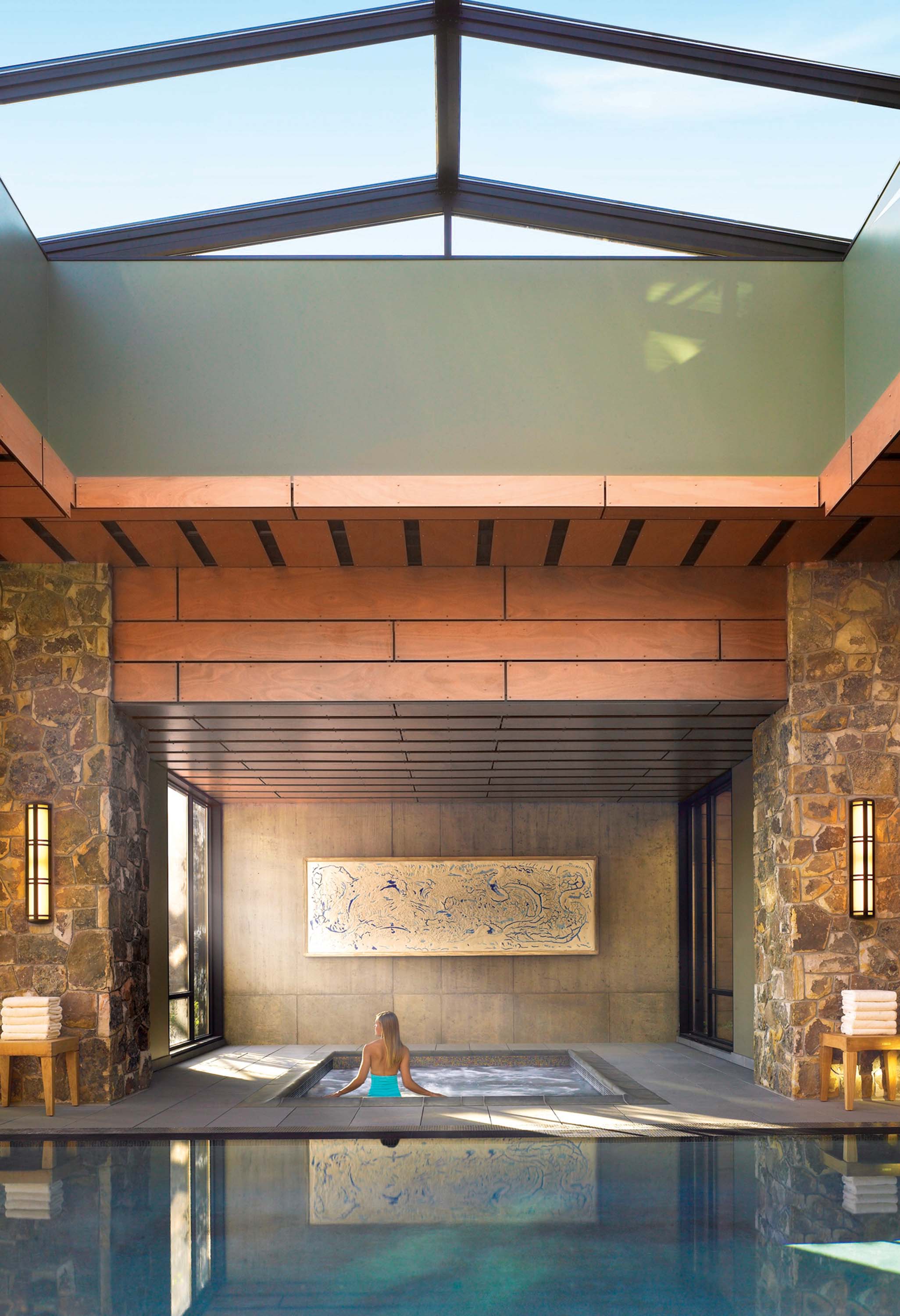 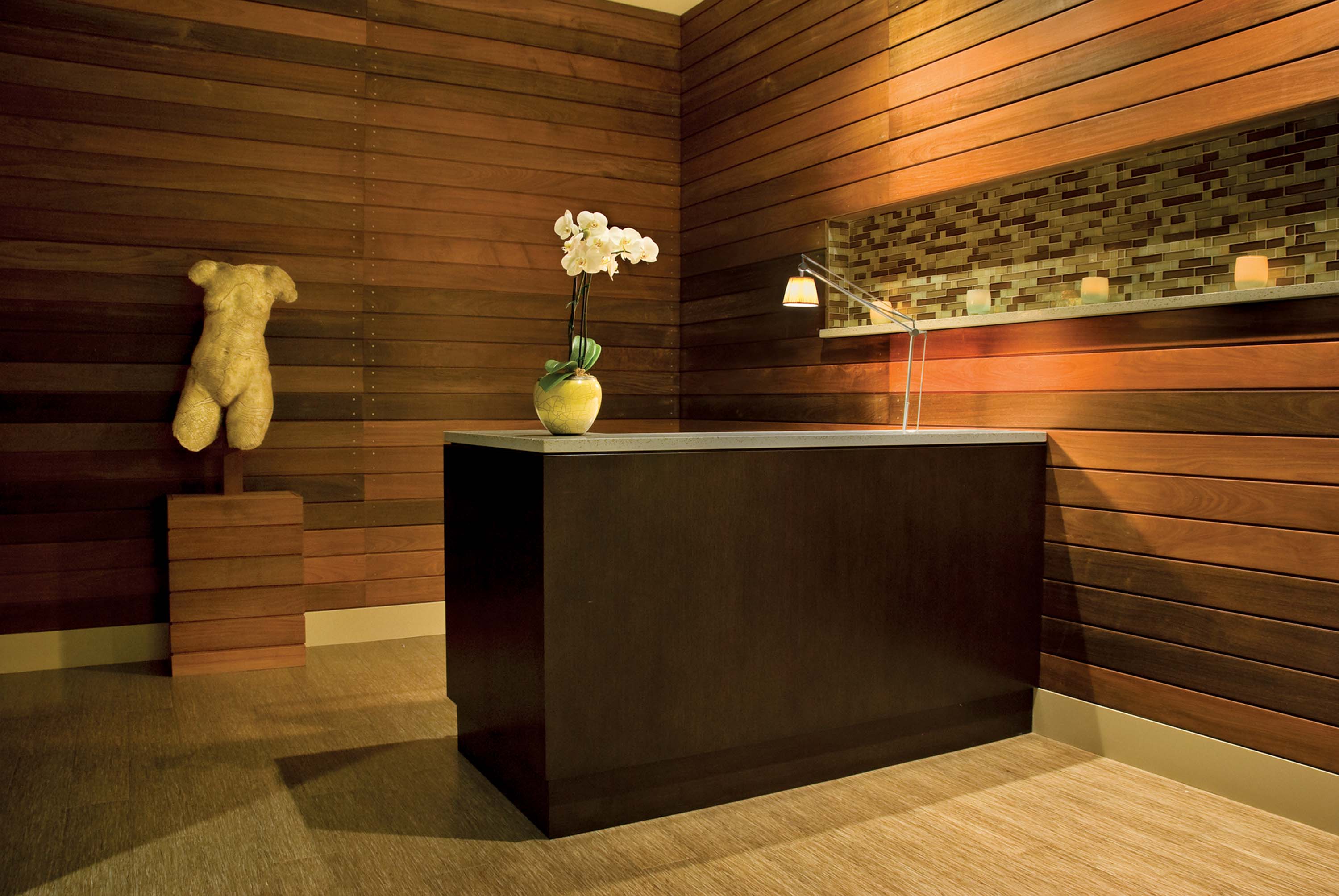 The award-winning Allison Spa showcases one of the hotel’s 500-plus artworks by Oregonians. This torso, “Nymphaeus #32”, is by Mark Terry. 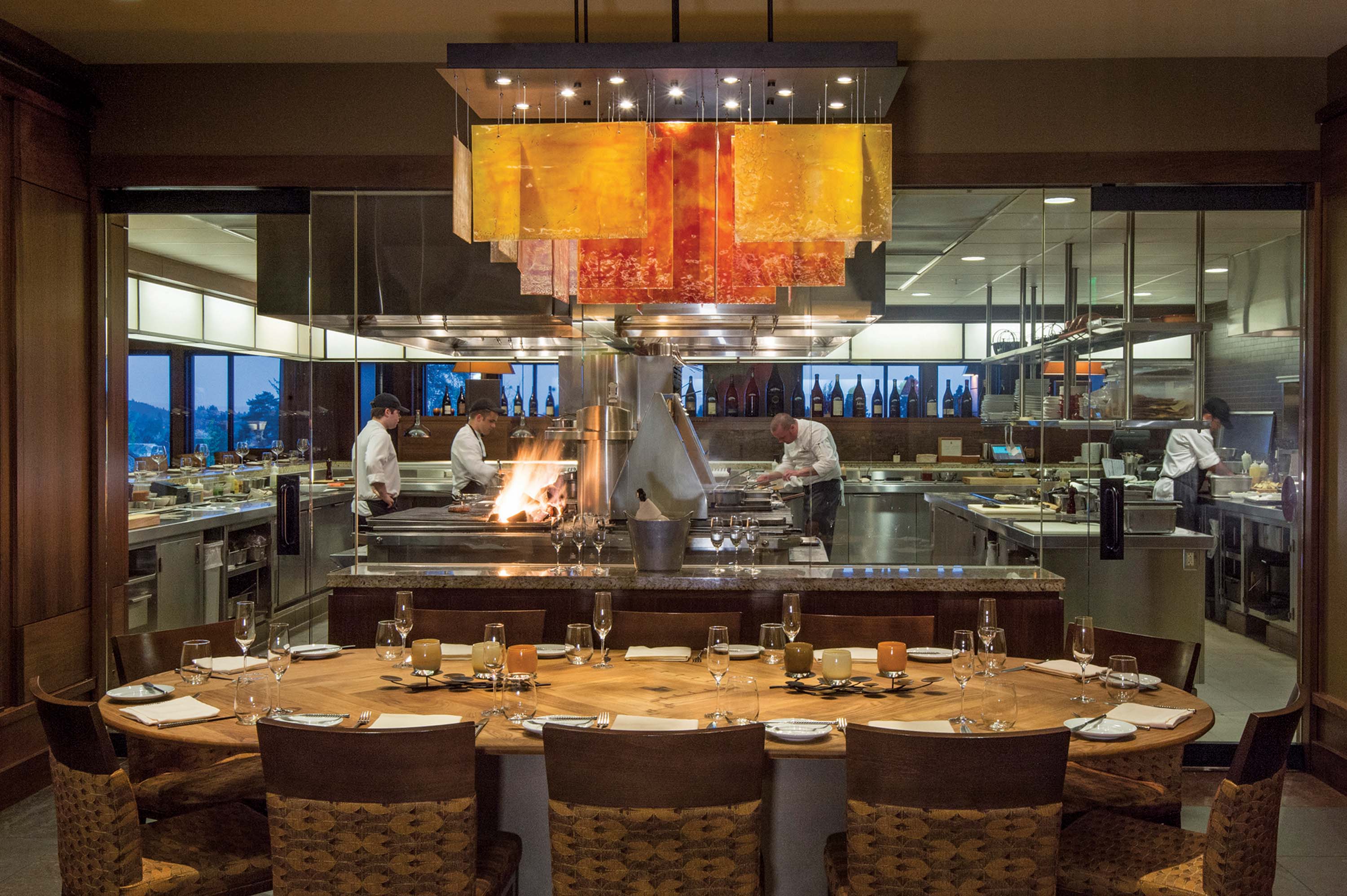 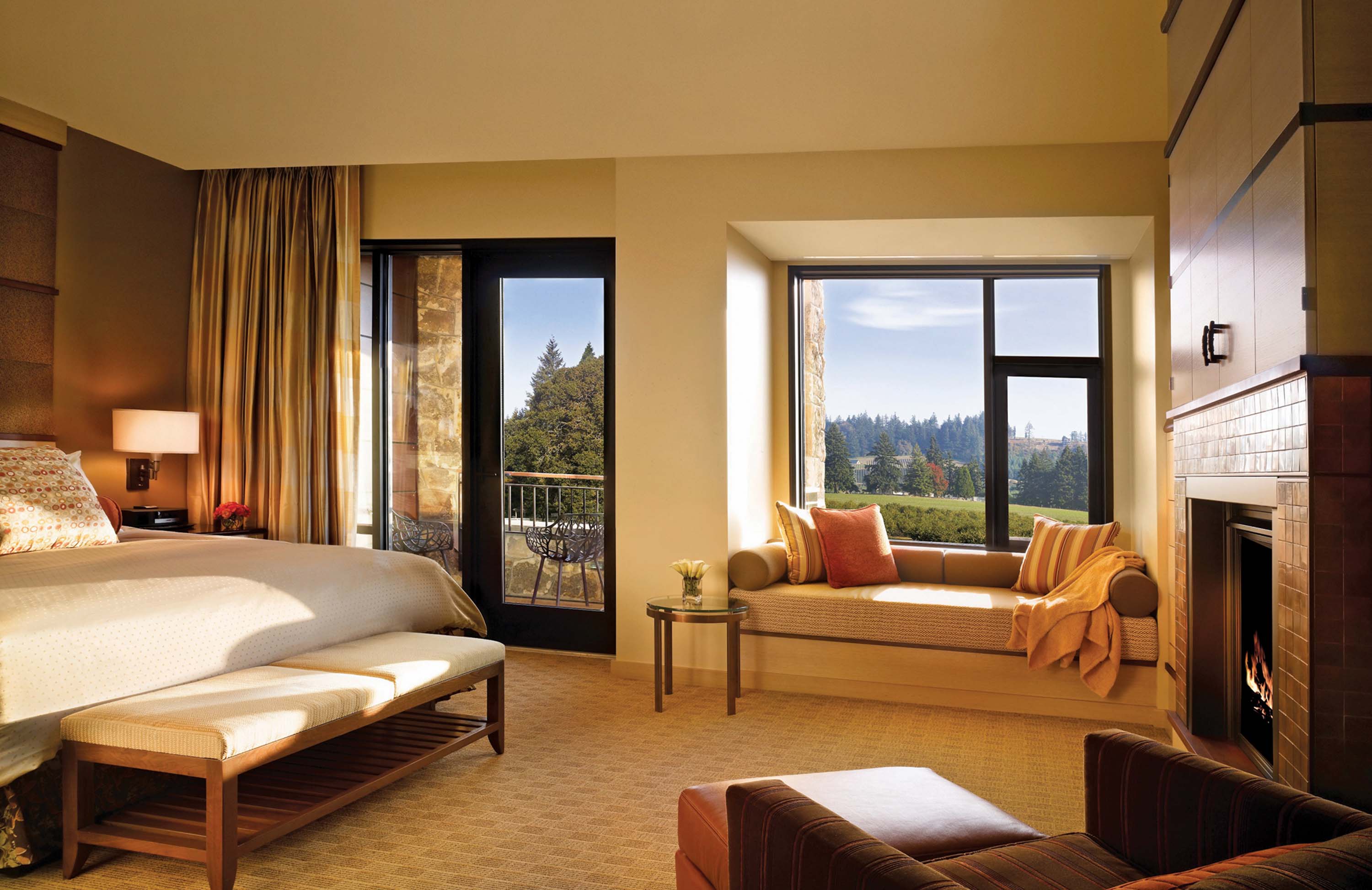 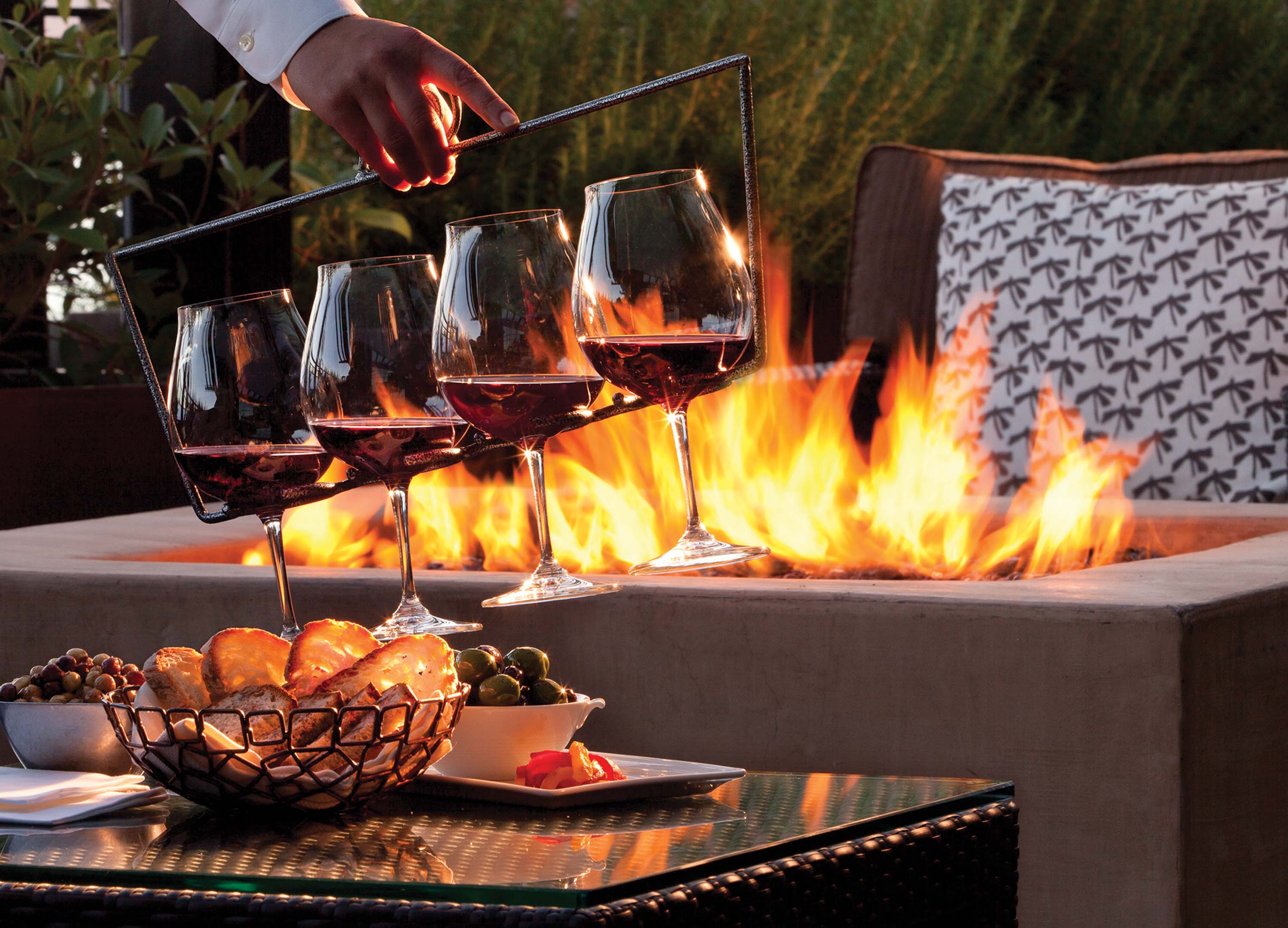 Wine service at the firepit on the outside seating terrace off the living room is one of the many services at the Allison Inn, just outside Portland. 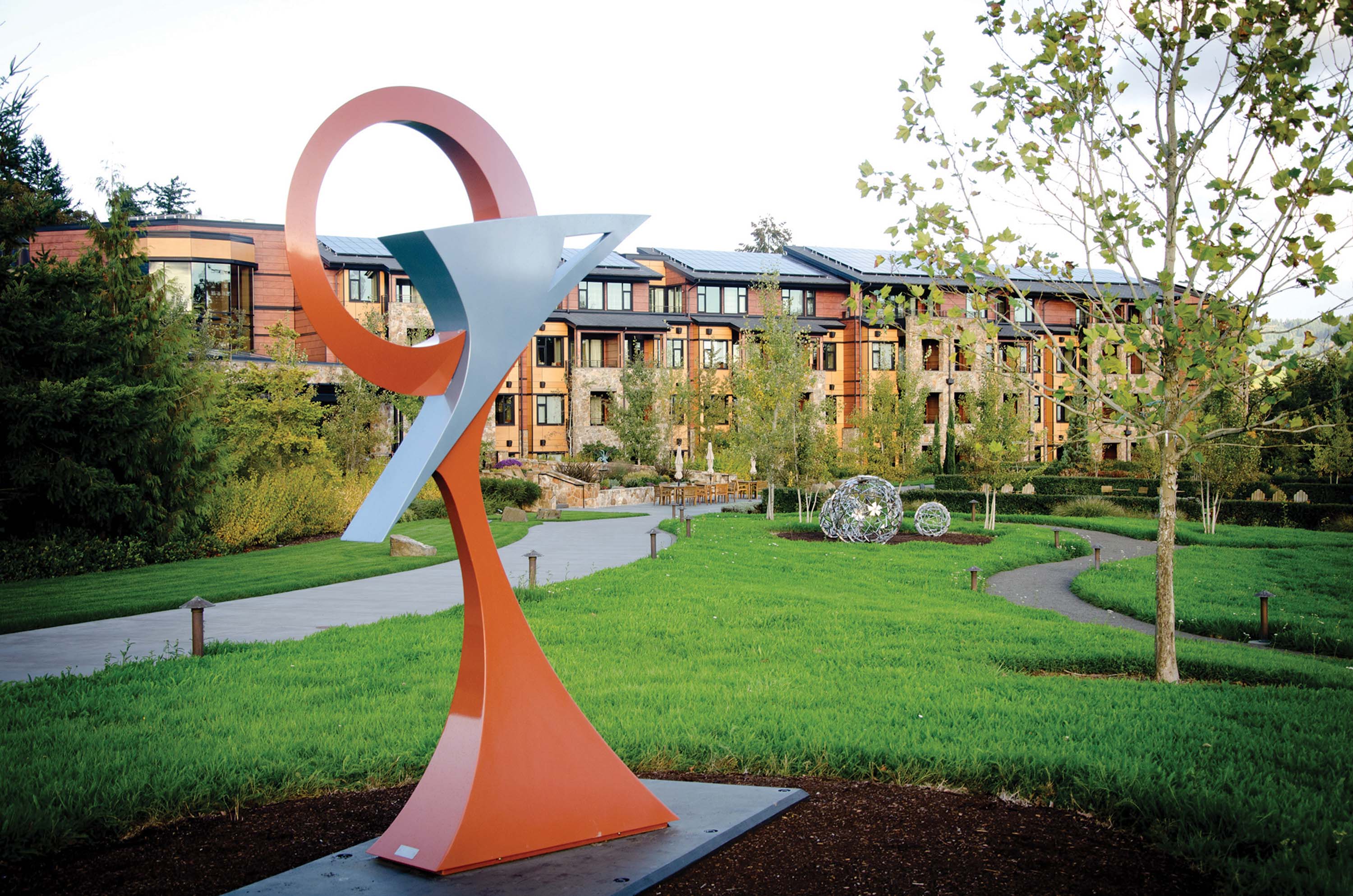 The red and silver garden sculpture, “Shapely II”, is by Jennifer Corio and David Frei. 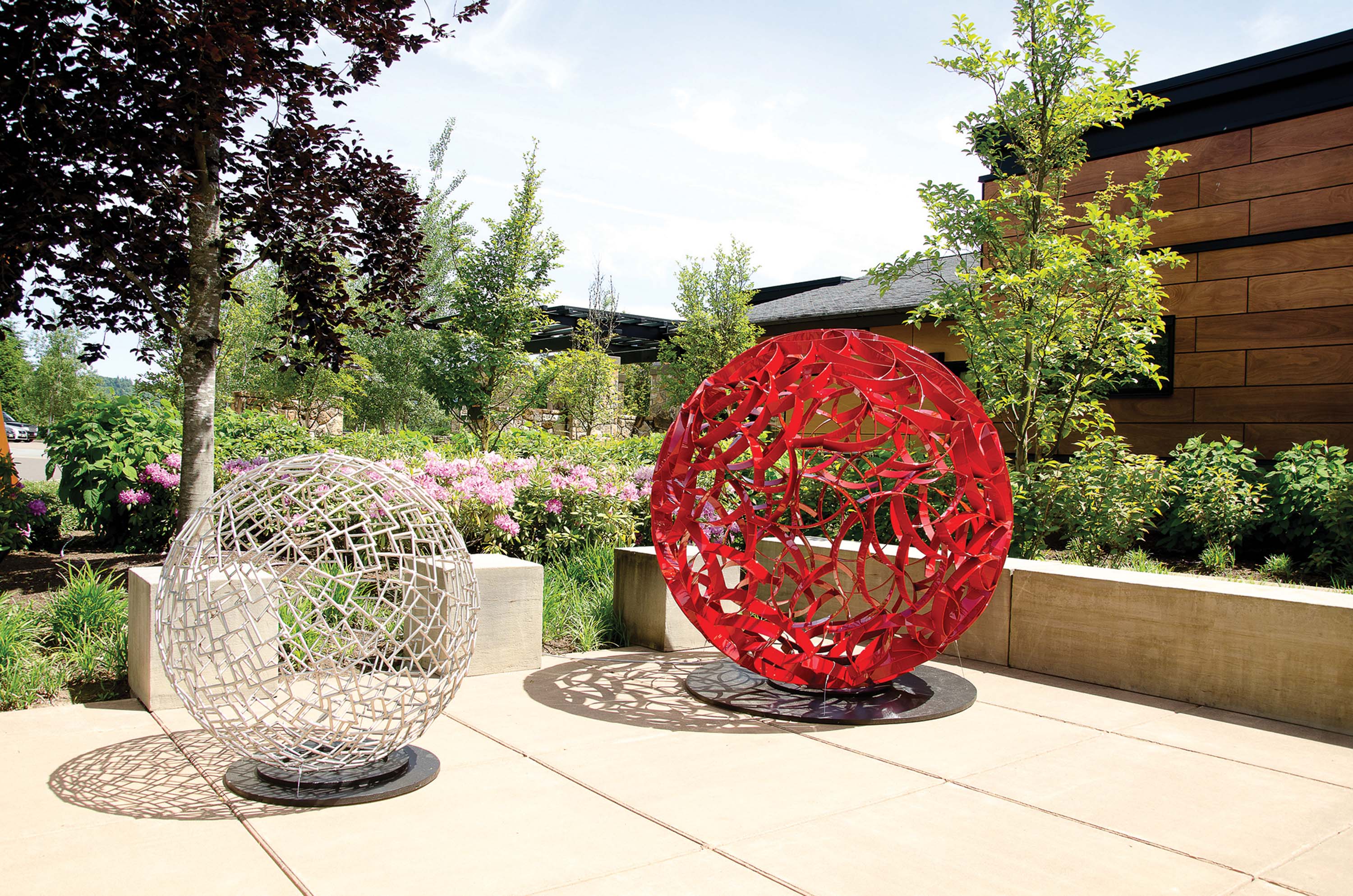 Placed on the 35 lush acres of the Allison Inn are sculptures such as “Outside In”, by Ryan Beard.