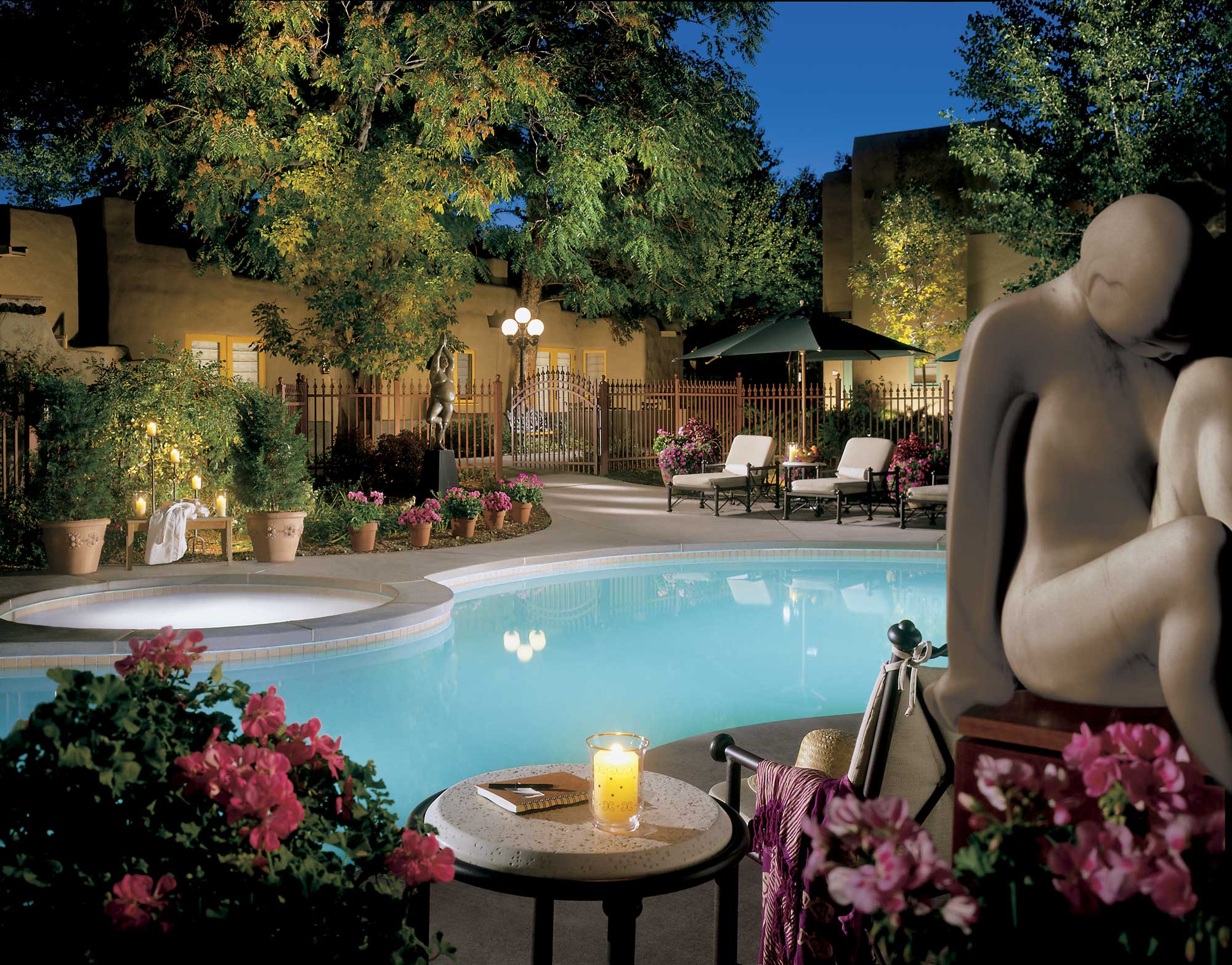 At La Posada a canopy of Honeylocust trees shelter an intimate outdoor space. Native vegetation, in combination with the earthy tones of sandstone and adobe, lend a rich character to the transparent private spaces throughout the hotel compound.

A design workshop is a collaborative process and an operational methodology that fosters an open working environment where diverse opinions and an attitude of discovery are encouraged and everyone participates. Design Workshop, Inc., named 2008 Firm of the Year by the American Society of Landscape Architects, is an internationally known landscape architecture, land planning and urban design firm. With offices in the western U.S., the firm provides a wide array of services — from private gardens to large-scale mixed-use communities to resort redevelopment — for public and private clients in North America and throughout the world. For more than 40 years, this home-grown business, based on the collaborative process, has generated projects and ideas that are now at the forefront of a profession that seeks to engage our culture while improving our environment.

From the beginning, the firm has used a comprehensive and holistic approach to design and planning, considering first and foremost the preservation of the natural environment, safeguarding existing communities and fostering new ones, creating connections, and leading change. And, there is a method to this operation. All work is done at a variety of scales in order to understand the broader context of the situation, allowing various levels of interest and authority to cross boundaries that typically separate them, and integrate technical disciplines that ordinarily operate in relative isolation from one another.

Design Workshop has been at the forefront of planning and design for many of the best-known ski resorts in the world. And, their role extends well beyond the surface of these projects; Design Workshop digs deep into the traditional elements of the profession, namely art and the environment, considering them concurrently with community and economics, significant aspects of the business of landscape architecture that often go unacknowledged. As such, the firm has been able to establish metrics for measuring the success of its projects in each of these four areas: art, environment, community and economics. Partner Rebecca Zimmerman describes this philosophy as “a way to focus energy and effort. When we work on projects that have an environmental or economic emphasis, we keep in our consciousness the value of community and art, always considering the optimal outcome.”

The manner in which the firm applies these values varies from project to project. Many projects fit many categories, but most stand out in one area. Some projects are affordable, while others only exist with the support of wealth or resources. In all cases, however, the binding and overriding philosophy of sustainability and balance provide the ideal profile for each project. All rely on a connection of people to each other and the mixing of ideas in what partner Todd Johnson summarizes as “the strongest creative and problem-solving force in civilization.”

Lower downtown Denver suffered from severe deterioration and abandonment. When the Union Pacific consolidated its Denver rail lines in the early 1990s, it left in its wake 65-acres of land devoid of any infrastructure, and in desperate need of environmental remediation. The site, located at the confluence of the Platte River and Cherry Creek, is the historic birthplace of Denver, and was once the setting for a rail yard that could accommodate as many as 80 trains a day.

Seeing an opportunity to create a self-contained urban village, Design Workshop, in consult with private interests and the City of Denver, created the master plan for The Commons, a new, multi-use district that is connected by pedestrian trails and an efficient light rail to downtown Denver and surrounding neighborhoods. Denver’s traffic congestion still exists, but by placing homes and jobs in immediate proximity to Denver’s new multi-modal transit center, residents and visitors can ride the light rail to Coors Field, the Pepsi Center, Invesco Stadium and the University of Colorado Auraria Campus.

The Millennium Bridge, now a recognizable landmark, provides a pedestrian connection over operating rail lines in the heart of the district. One of the major outcomes of this project has been the increase in land value. In the space of a decade, the value of the land increased by a factor of 200, from an asking price of 75 cents per square foot in 1993, to $150 per square foot in 2003.

The marketplace affirmed the plan with brisk sales of the first housing units, and the project has stimulated a return on investment in the city core, as well as inspiring mixed-use, new construction in other parts of Denver. In addition, new projects are starting on the western side of the Platte River, encouraged by the positive effects of the Commons.

In Washington state, community renewal of a very different sort is happening. Port Gambel, located on the Kitsap Peninsula and adjacent to the Hood Canal, is an historic timber mill town established in 1853 by an entire logging community that was moved from Maine to the Puget Sound. Looking very much like a traditional New England village, Port Gambel is now one of the only remaining company-owned towns in North America.

In many ways, this small town is representative of the manner in which western settlement took place. The mill closed in 1995, leaving behind a collection of cultural and indigenous references, including a total of 51 timber buildings, organized around an historic town structure, and marine and science opportunities that bespeak a company town heritage. Rather than allow their deterioration, the plan for this community calls for the preservation of all existing structures, and a planning effort is underway to resettle the community, considering it a new gateway to the Puget Sound and Olympic Peninsula.

“We felt a special responsibility for the care and protection of these unique historic resources,” says Shaw. “Our intention is not to create a museum tour replete with the detailed architectural patterns of the historic time frame. Rather, we want to rebuild the town in a way that allows it to celebrate its history in a manner that is compatible with the current needs of its inhabitants, with an eye to the future.”

A different kind of western settlement pattern is found in Santa Fe, where the compact, traditional city pattern and quaint adobe architecture is attractive to amenity migrants — people looking for an eye-catching and culturally vibrant region in which to build a second home. The real question arises, however, in finding ways to accommodate the rest of the population in a sustainable and aesthetically appropriate fashion without degrading the natural beauty and resources that give the region its identity. Rancho Viejo is an 11,000-acre new community just outside Santa Fe centered on clustered villages whose raison d’etre is to challenge suburban sprawl by providing affordable housing, jobs, recreational opportunities and open space, all within walking or minimal driving distance.

Water is harvested from streets, drainages and rooftops to supplement irrigation. In fact, one of Rancho Viejo’s outstanding accomplishments is the implementation of individual cisterns on each home for collecting water from roof runoff for use in the landscape irrigation systems. In 2002, the first full year of operation, water conservation measures resulted in a savings of more than 40 percent over the arid county’s strict water limits.

Joe Porter, a founding partner of Design Workshop, describes the success of Rancho Viejo as a change in mindset with the needs of the future in mind. “Creating change that helps a community flourish requires a thoughtful and thorough engagement of the people who live there — rarely an easy task. Helping communities manage change is less about change in the landscape and more about bringing people together to create a future, because the process of change begins in the hearts and minds of human beings.”

Design Workshop’s ability to lead change is not restricted to communities and larger urban entities. In fact, many of its better known projects are smaller residential and destination resort environments, infused with a great deal of detailed design and landscape architecture. One such example is La Posada de Santa Fe, a 157-room boutique resort located just two blocks from Santa Fe’s historic plaza. The hotel’s roots go back to 1882 when Abraham Staab, a prosperous businessman, built his three-story, mansard-roofed brick mansion, in the French Second Empire-style, on the property.

In the 1920s, new owners R.H. and Eulalia Nason constructed a series of Pueblo Revival-style adobe casitas around the existing Staab Mansion and carriage house, converting the property into a motor lodge that was called La Posada, or “the inn.” During the 1940s, more small casitas were constructed to house the many long-term guests and artists who were an important part of Santa Fe’s flourishing arts community.

In the mid-1990s, a new owner took over the property with the intent of turning it into a destination resort and spa, a quiet oasis away from the touristic frenzy of the adjacent downtown area. The new design preserves the best of the historic landscape, merging new facilities amongst the historic buildings and existing landscape of large trees and expansive gardens. And, while the old, undulating walls of the motor inn remain, the previously auto-dominated site is now solely a walking domain of stone and concrete paths connecting courtyards, fountains, lawns and terraces.

Turning the corner on the first decade of the 21st century, Design Workshop continues to measure ideas and outcomes, striving to create built environments that engage the senses while making the most of narratives found in the cultural and physical landscape. Says partner Kurt Culbertson, “Great places to live embrace the natural world, draw people in with compelling forms, foster interaction, enliven encounters and create a broad range of value for a wide array of people.”

Sarah Chase Shaw is an Aspen-based landscape architect and freelance writer. Her latest book, Garden Legacy: The Residential Landscapes of Design Workshop, has just been released. Married to Richard Shaw, Sarah has followed and written about the firm for 15 years. 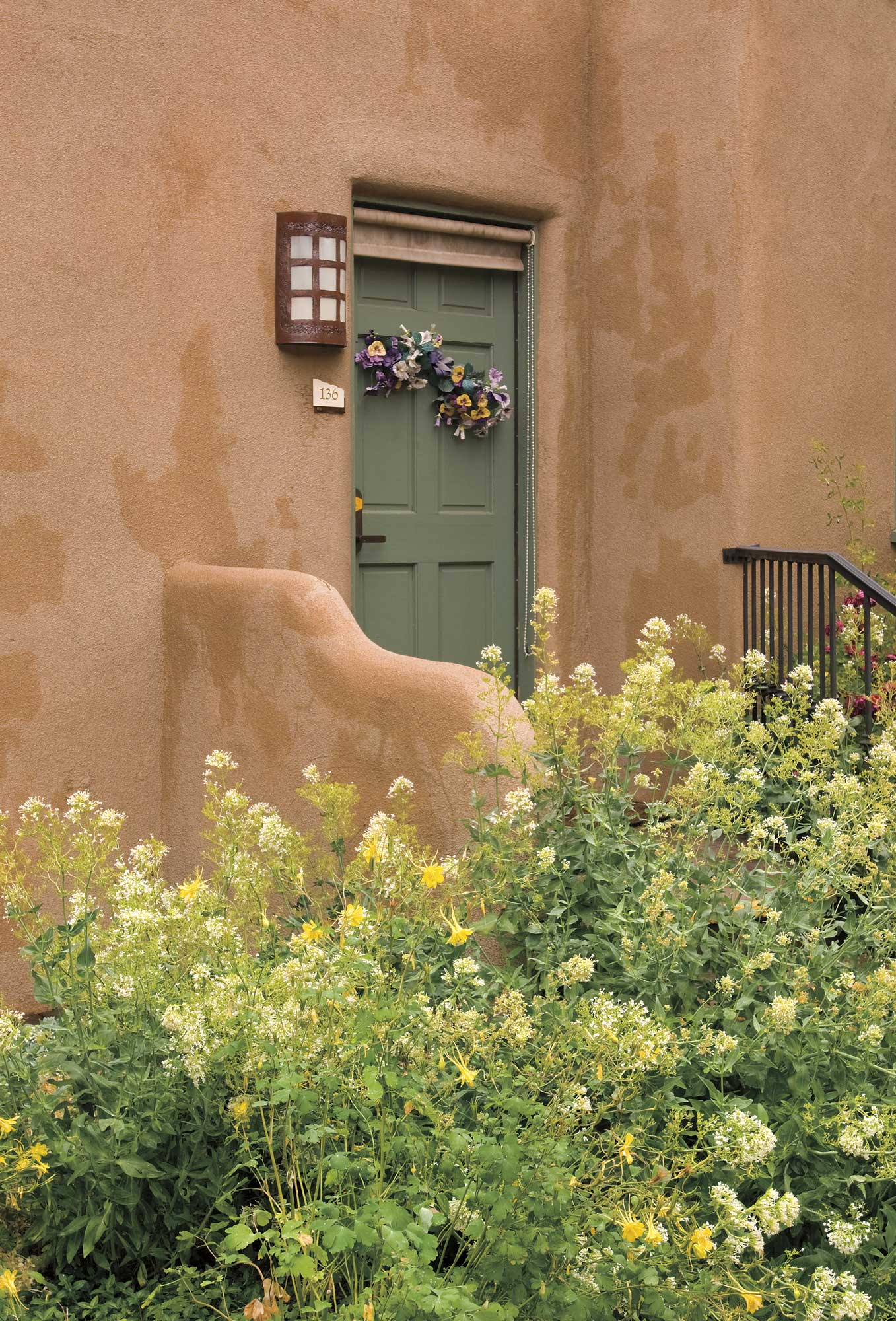 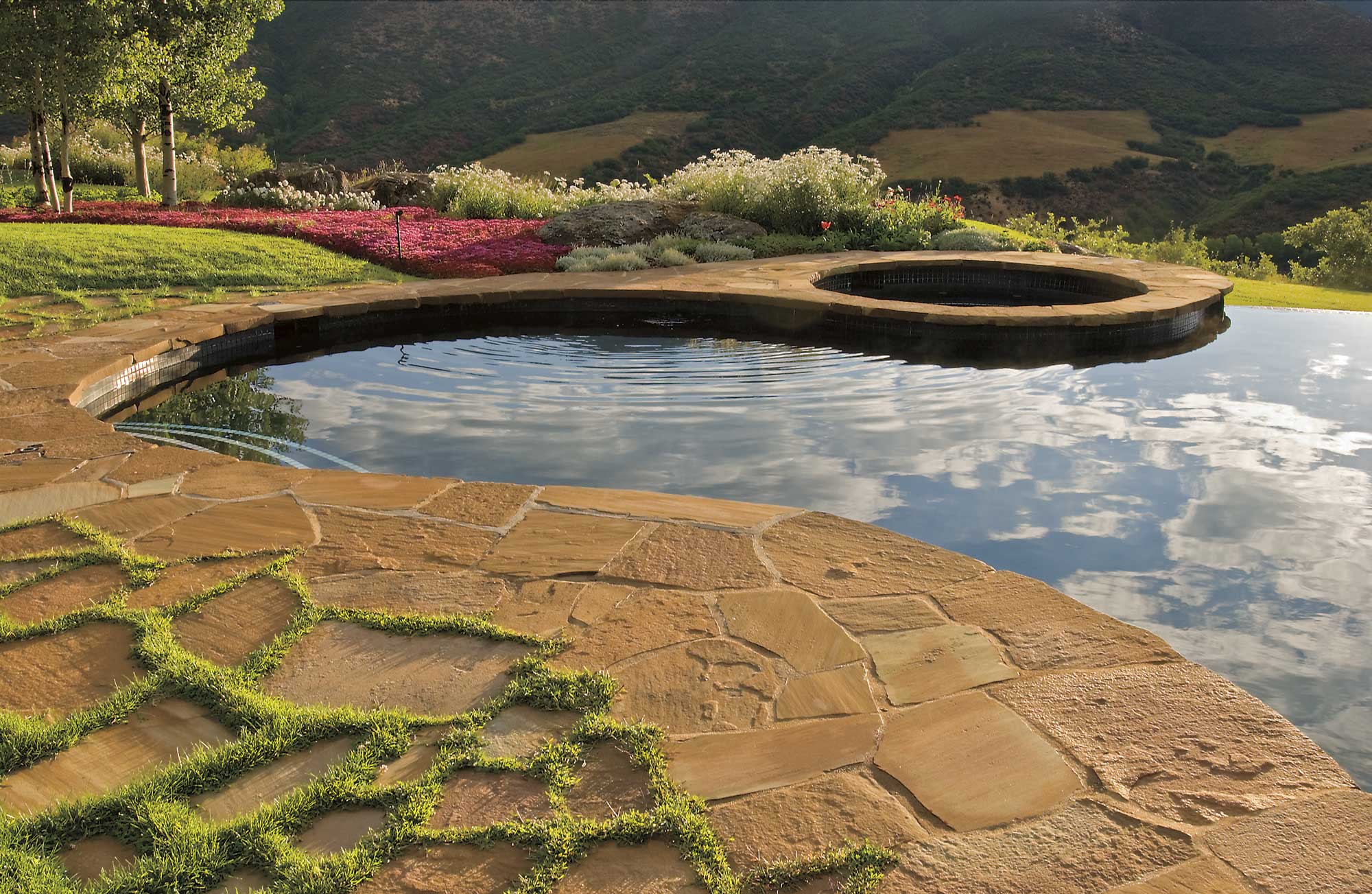 The infinity-edge swimming pool and spa perch on the edge of a steep hillside overlooking the Woody Creek Valley to the east. The abstract and curvilinear outline of the pool and spa are echoed in the subtly sculpted massings of bright pink dragons blood sedum and white daisies. 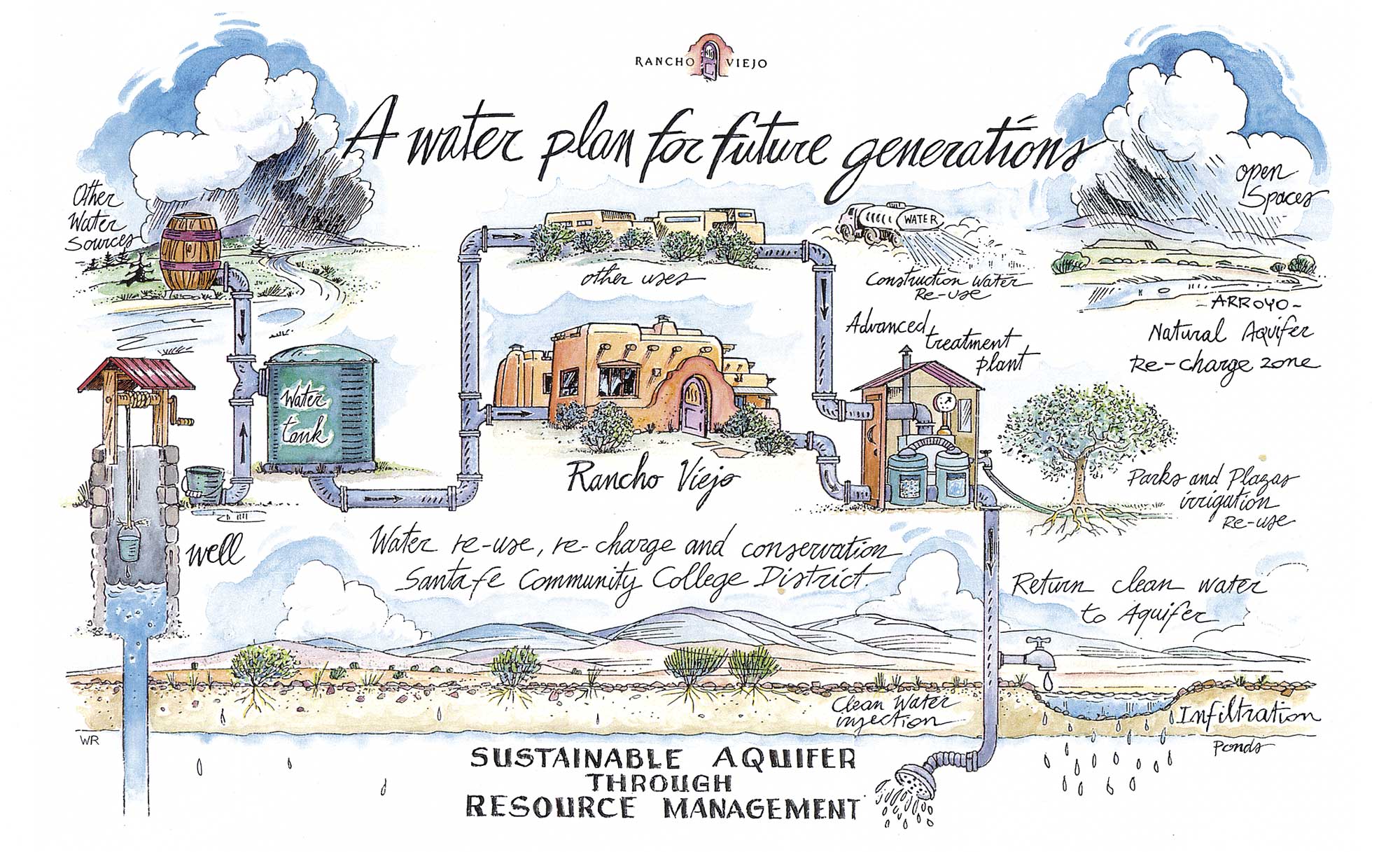 The water-cycle drawing illustrates Rancho Viejo’s holistic plan for water conservation, showing the cycle of water conservation and aquifer recharge and describing a vision for water use in non-technical, common sense terms. Cisterns capture roof drainage for irrigation and are provided as a standard feature for every new home. Irrigation captured from the household gray water systems combines with a palette of drought-tolerant plant materials to produce lush domestic landscapes. 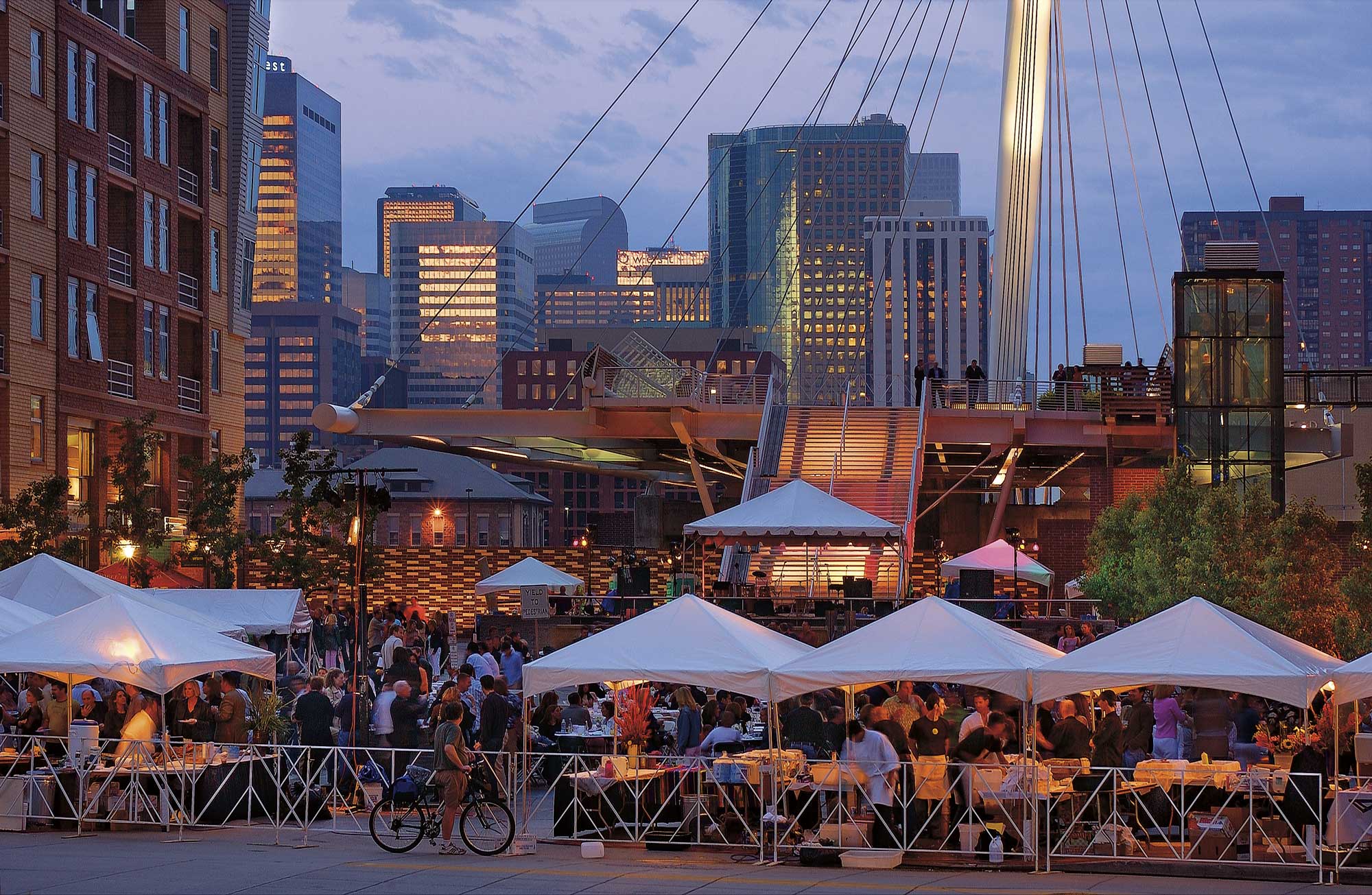 The plaza at the Commons has become a favorite gathering space for both formal and informal occasions.  It is used regularly for special events and is also a stop-off for bicyclists using the nearby trail system that runs along the edge of the South Platte River.  The plaza is connected to downtown Denver by the Millennium Bridge. 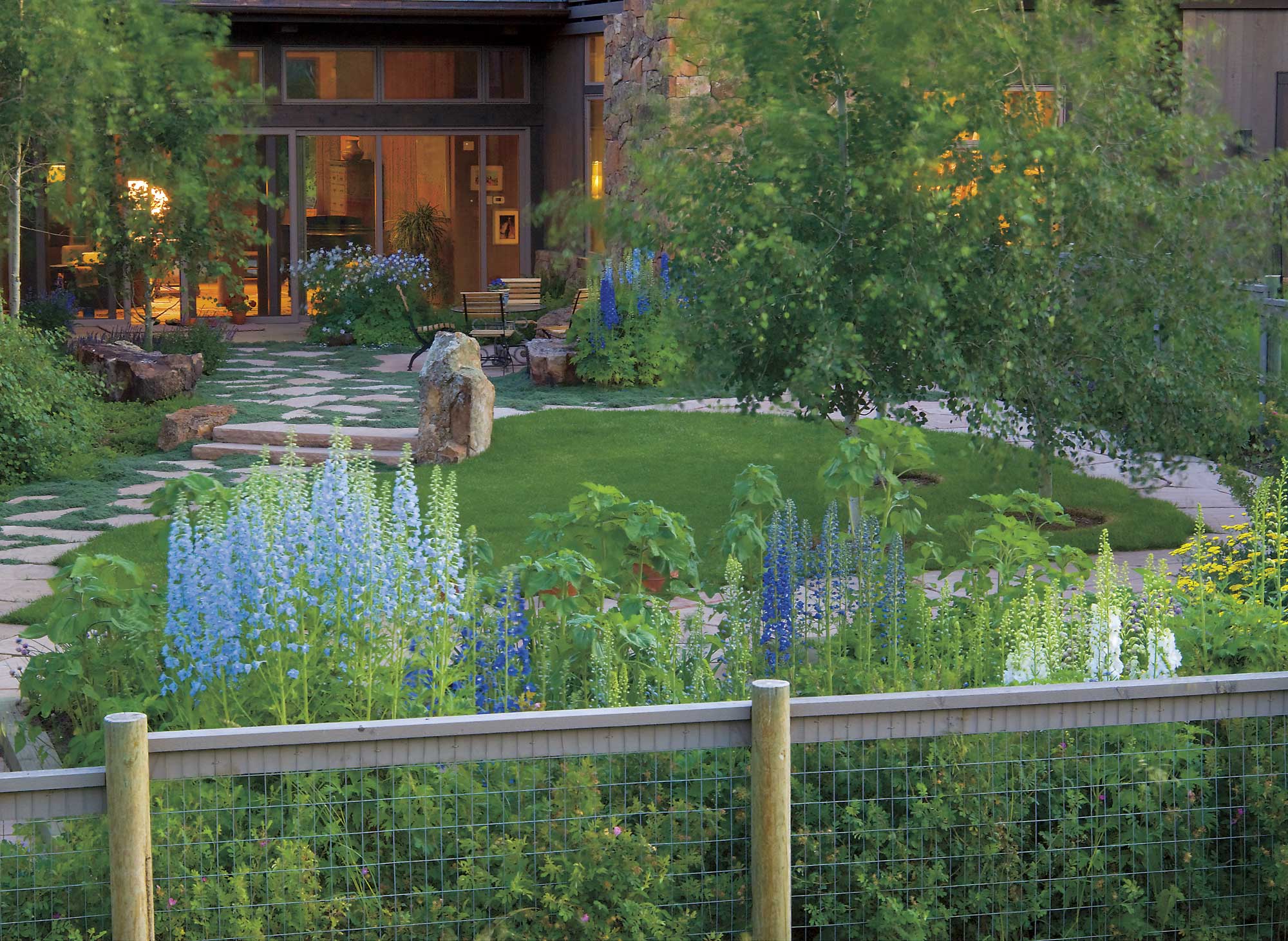 On the north side of a home in Old Snowmass, Colorado, an enclosed garden blooms profusely throughout the summer. Raised beds contain vegetables and herbs. Perennial gardens include a rotating seasonal selection of flowers. 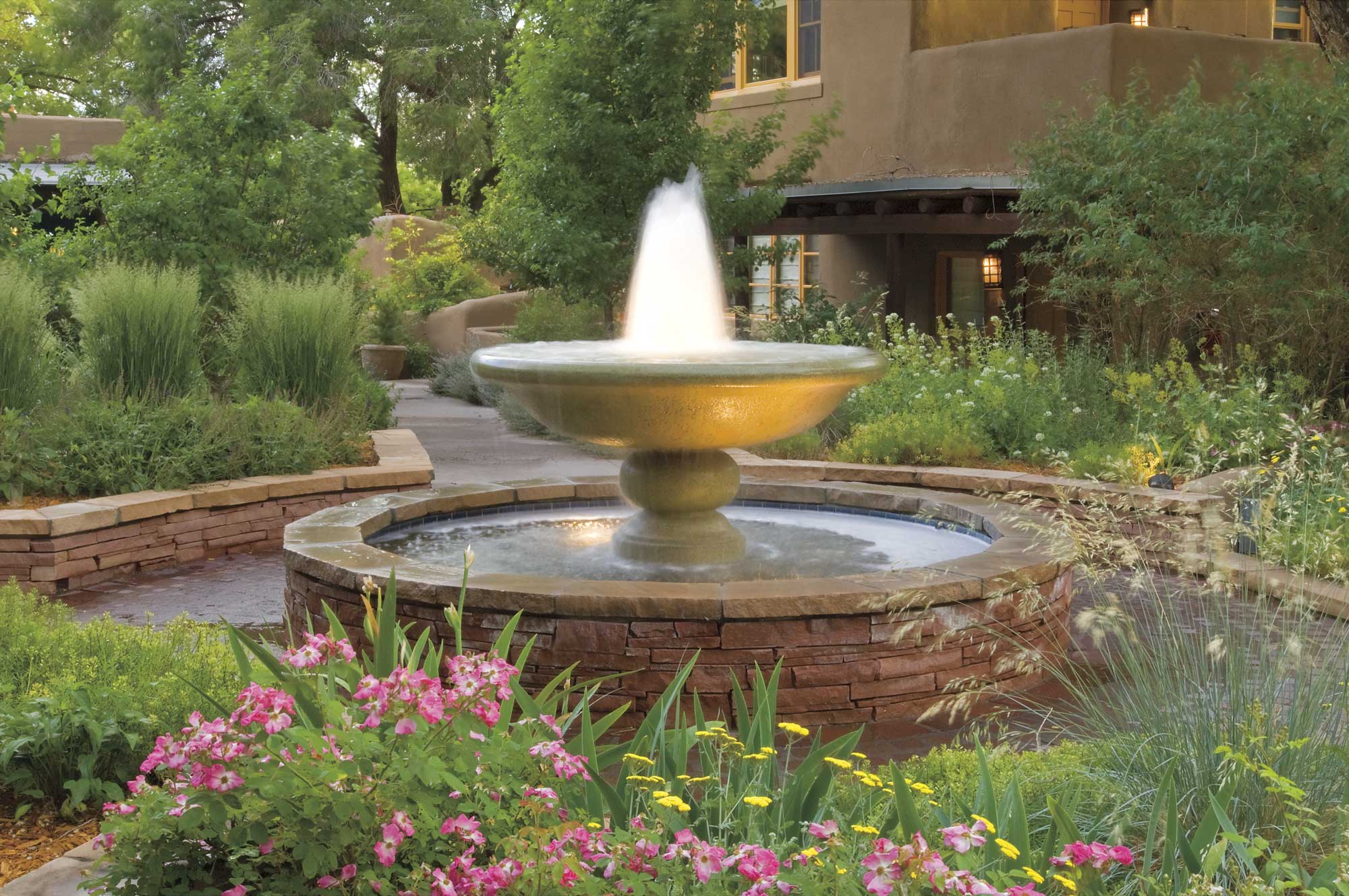 The spa and swimming pool at La Posada took the place of a large portion of the former motel’s asphalt parking lot.  Other former parking areas were transformed into gardens and courtyards. The tall evergreen trees are the original Colorado Spruce that were carefully protected during construction of the new buildings located directly behind them. 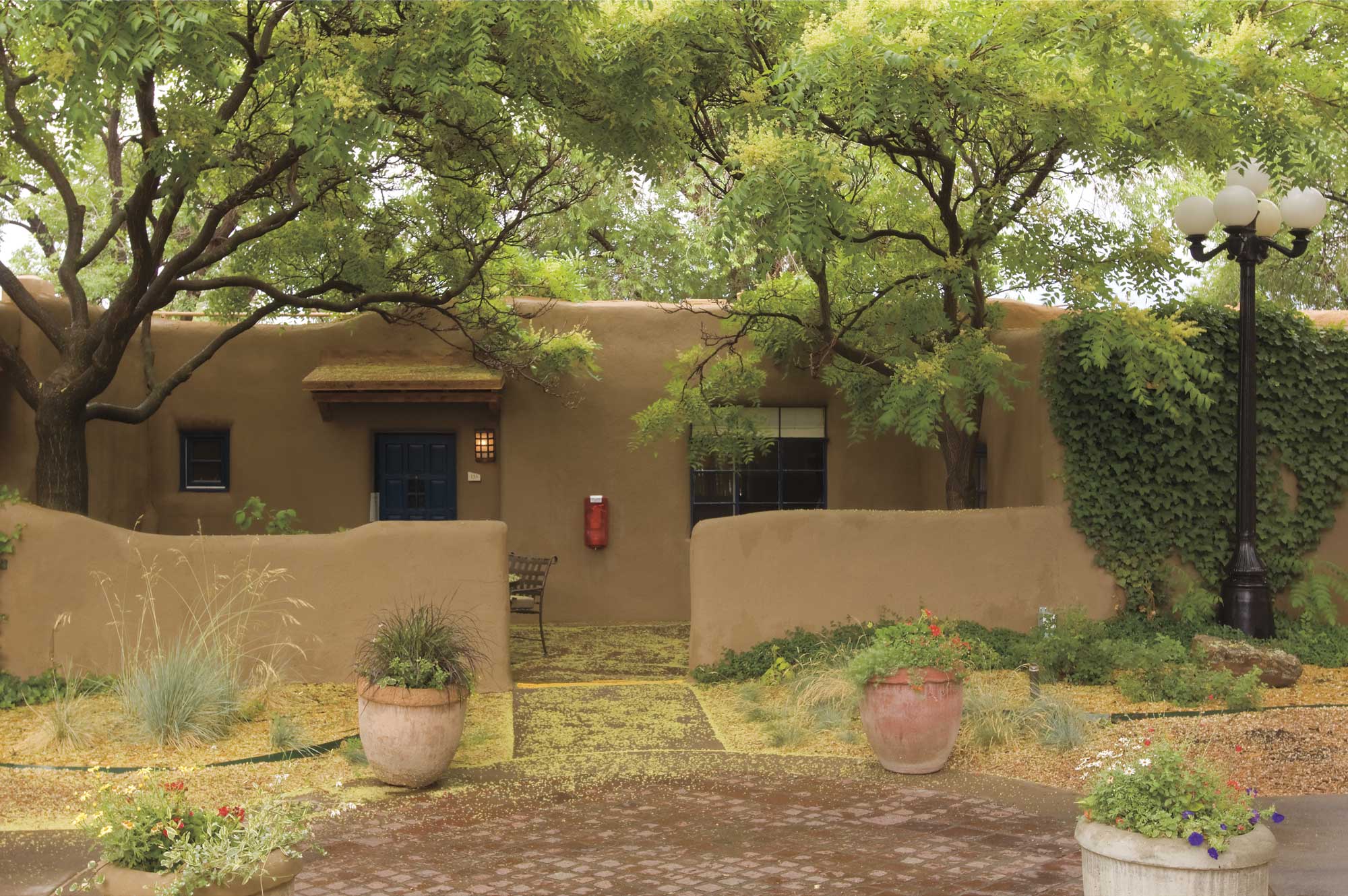 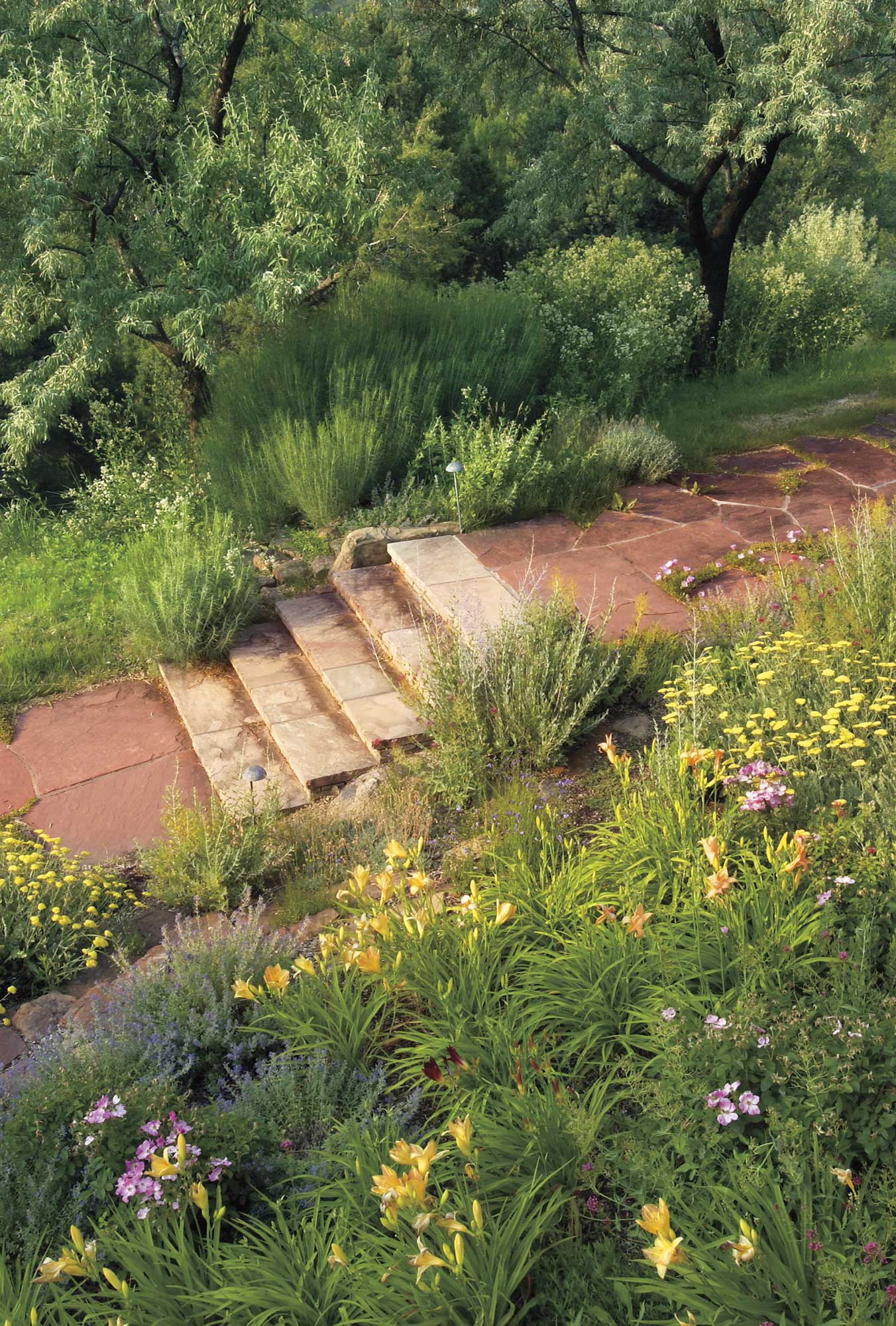 At this Tesuque, New Mexico home, an array of plantings grow along the edges of the arrival walkway steps and in between the sandstone flagstones.

Densities at Rancho Viejo transition from two-story townhomes at the village core to neighborhoods of single-family residences, with estate homes tucked into hillsides at the periphery of the community. 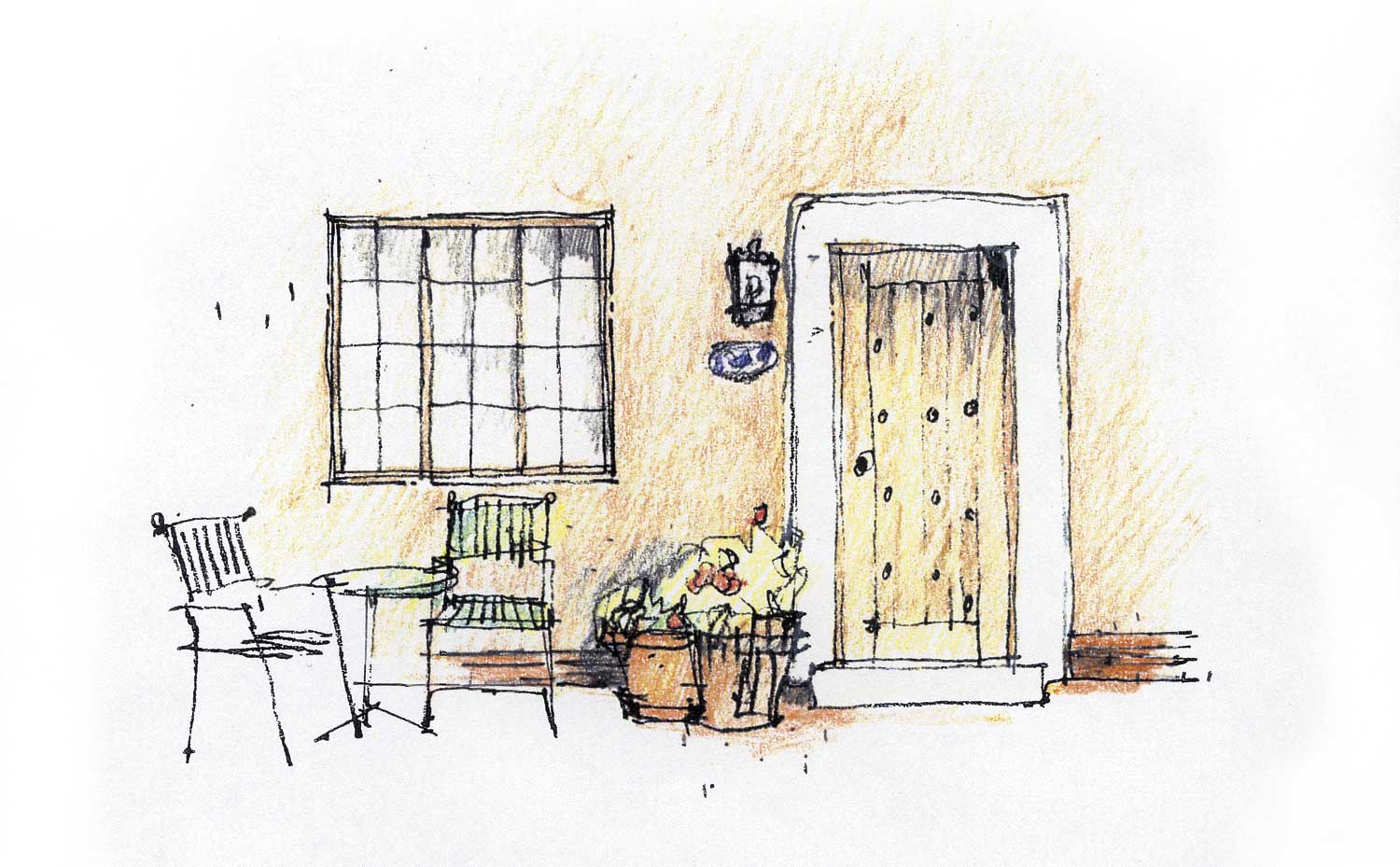