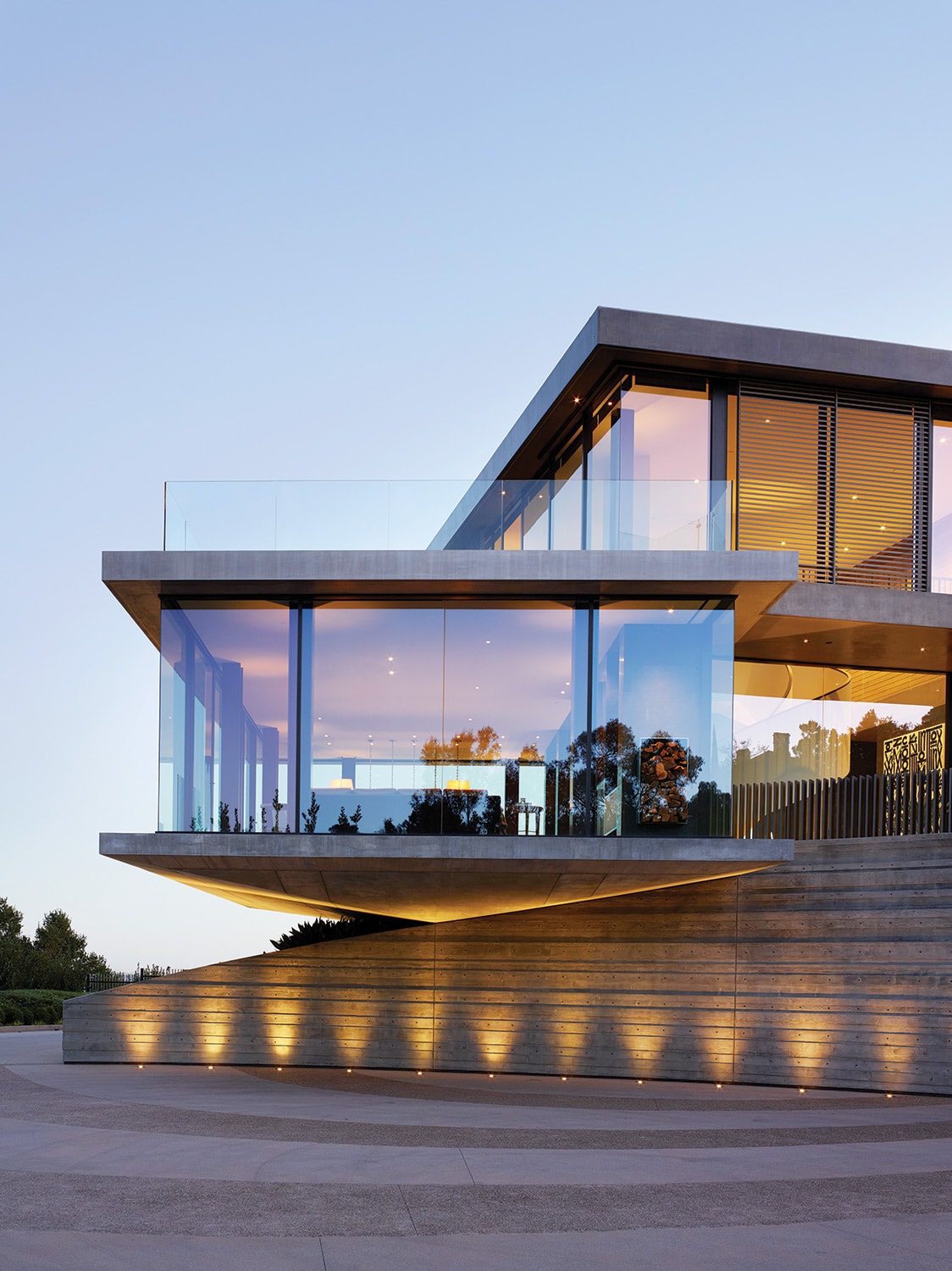 Grant Kirkpatrick, Founder of KAA Design, describes his architectural style as “warm contemporary,” and when questioned about the firm’s philosophy, he returns again and again to the idea of timelessness. Think of that term not just as a desire to design houses that can’t be pegged to a decade or trend, but to build with the finest craftsmanship and materials available, to match the house to its local context, whether that be neighborhood or terrain, and — most important — to unite it with nature. On top of that mixture, he drops in a bit of whimsy. 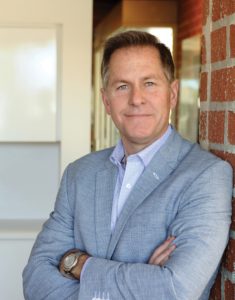 “Our whole setup here, and it’s not a very good business model,” he says, “is to do something unique, something we’ve never done before, and to do that over and over again.” 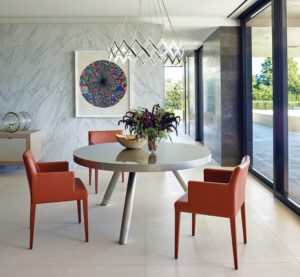 Artwork by Dennis Koch hangs by a tripod table by Baltus with chairs by Poltrona Frau, all below a suspension light by Plug. Photos: Richard Powers

These days, the 30-year-old firm designs only houses. At one time, Kirkpatrick and his partner, Erik Evens, had a wide-ranging practice, designing residential and commercial businesses, including clubs, restaurants, and retail (for example, Hugo Boss stores nationwide). But 10 years ago, when the recession hit, forcing the firm to go from a staff of 85 to 25, the partners were “in survival mode,” as Kirkpatrick puts it. “After 20 years, we’d risen to be one of the go-to firms in L.A. for high-end residential customers, and we had an epiphany: If we can be amongst the best at something, why not own it? We slowly jettisoned everything except residential and landscape, and it was the best thing we ever did.”

Kirkpatrick was passionate about contemporary architecture, and Evens about traditional, so they split the practice (now back up to 45 employees, with no plans to enlarge), although they remain under the same roof. 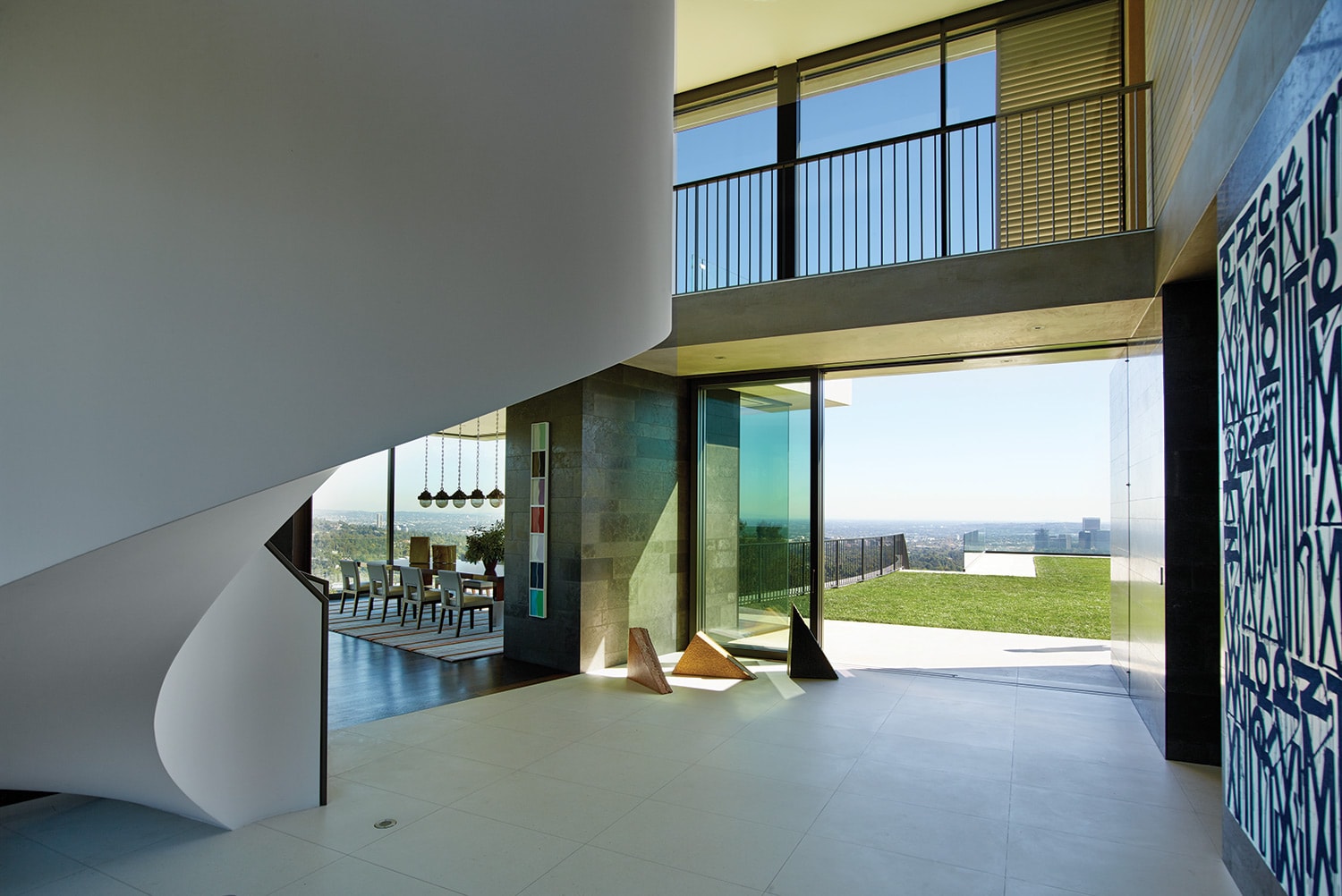 A curving white plaster stairway in the entryway provides the otherwise orthogonal house with a sense of playful buoyancy. Past a painting by Retna, the open design leads to the upper-level garden terrace. 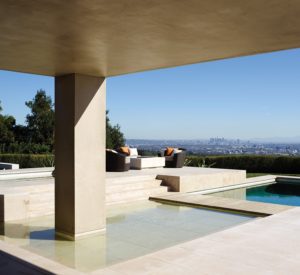 The spa and the outdoor seating area with a fire pit are sheltered below the upper-level main garden terrace. 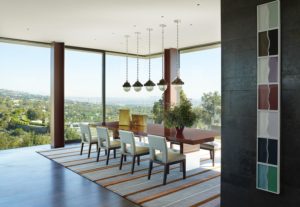 Today, Kirkpatrick creates retreats ranging from narrow beachfront sites (at the moment, the firm has six projects on the prized Strand boardwalk in Manhattan Beach) to contemporary castles (some 80,000 square feet) on sprawling acreage. They work all along the California coastline and inland in the desert communities. Clients include unnamed celebrities (as well as Matt Damon, Julia Louis-Dreyfus, Maria Sharapova, Tom Hanks, and Rita Wilson) and millionaires far from the entertainment business. Kirkpatrick enjoys the challenge of creating a luxurious aerie in a cramped space, but he’s just as happy spreading out with limitless room.

“It all comes back to our connection with nature,” he says. “How powerful, how DNA-based it is.” 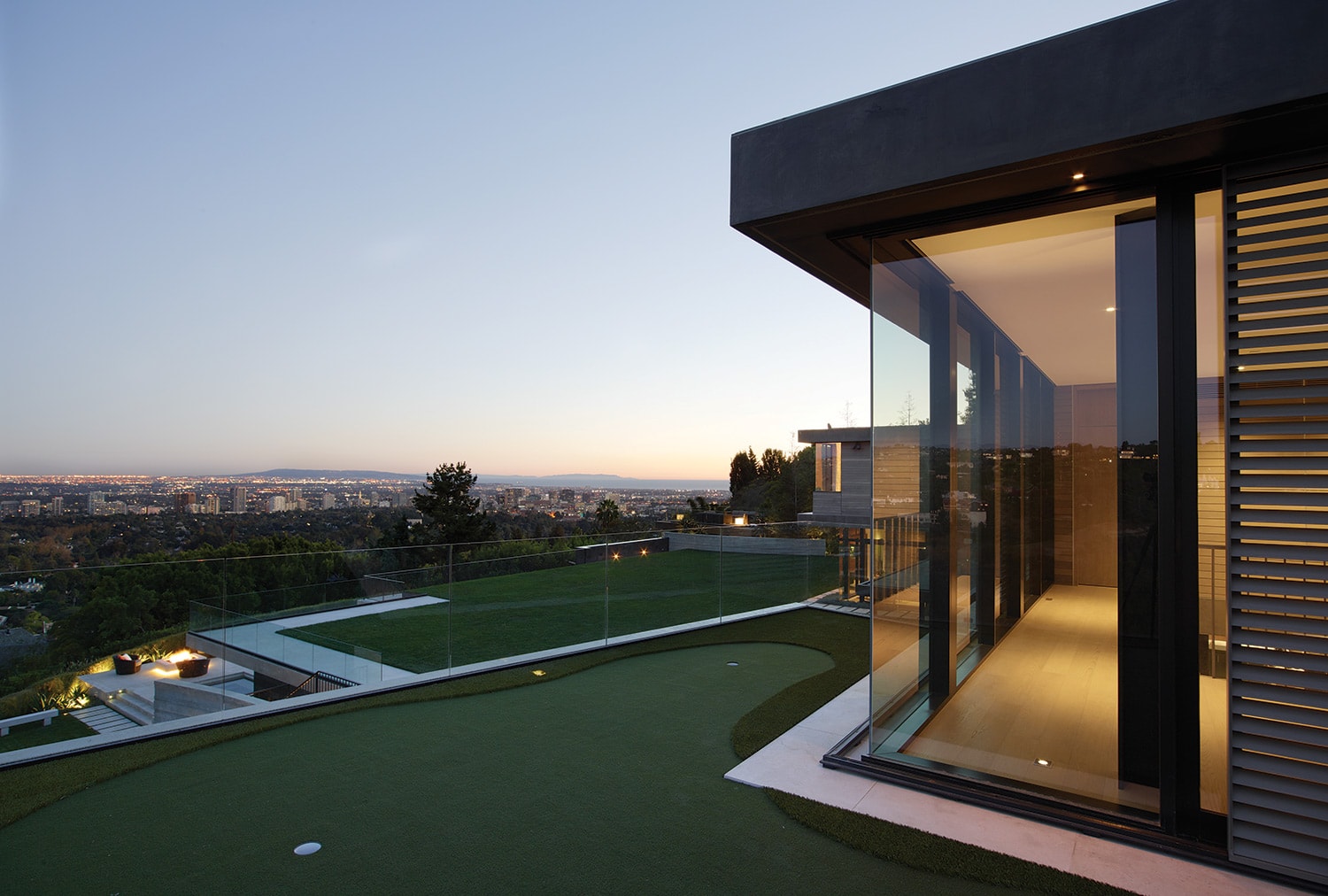 Floor-to-ceiling windows and sliding doors meld into tiers of lawn jutting over the city lights at dusk.

This year, the firm is celebrating 30 years and a book, California Contemporary: The Houses of Grant C. Kirkpatrick and KAA Design, which is like a beautifully photographed tour through Kirkpatrick’s head. The architect is feeling a bit nostalgic, but he believes the best work is always ahead. 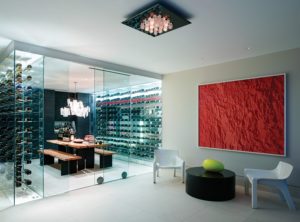 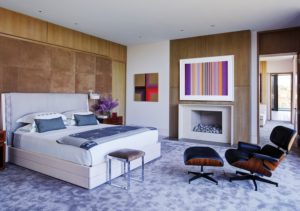 A Poltrona Frau bed with Hermès blanket centers the master bedroom, with artwork by Eric Dever and Tim Barrington.

“We’re kind of torch-bearers for a time,” he says of the firm’s expansion of California Modernism, citing, among other firms at the forefront, Marmol Radziner and Mark Rios. “We’re constantly borrowing from our predecessors, but we’re evolving it. A lot of our work is pushing things, and we have great technology and structural materials now, but the true work is carrying that contemporary torch forward.”

A perfect example of this is Balance Hill, a home in L.A.’s opulent Bel Air neighborhood. Its peninsula-like site on a curving hillside road provided an opportunity to create cantilevered, soaring rooms with striking views. But something about the design seemed incomplete — until Kirkpatrick took his then 10-year-old son to visit 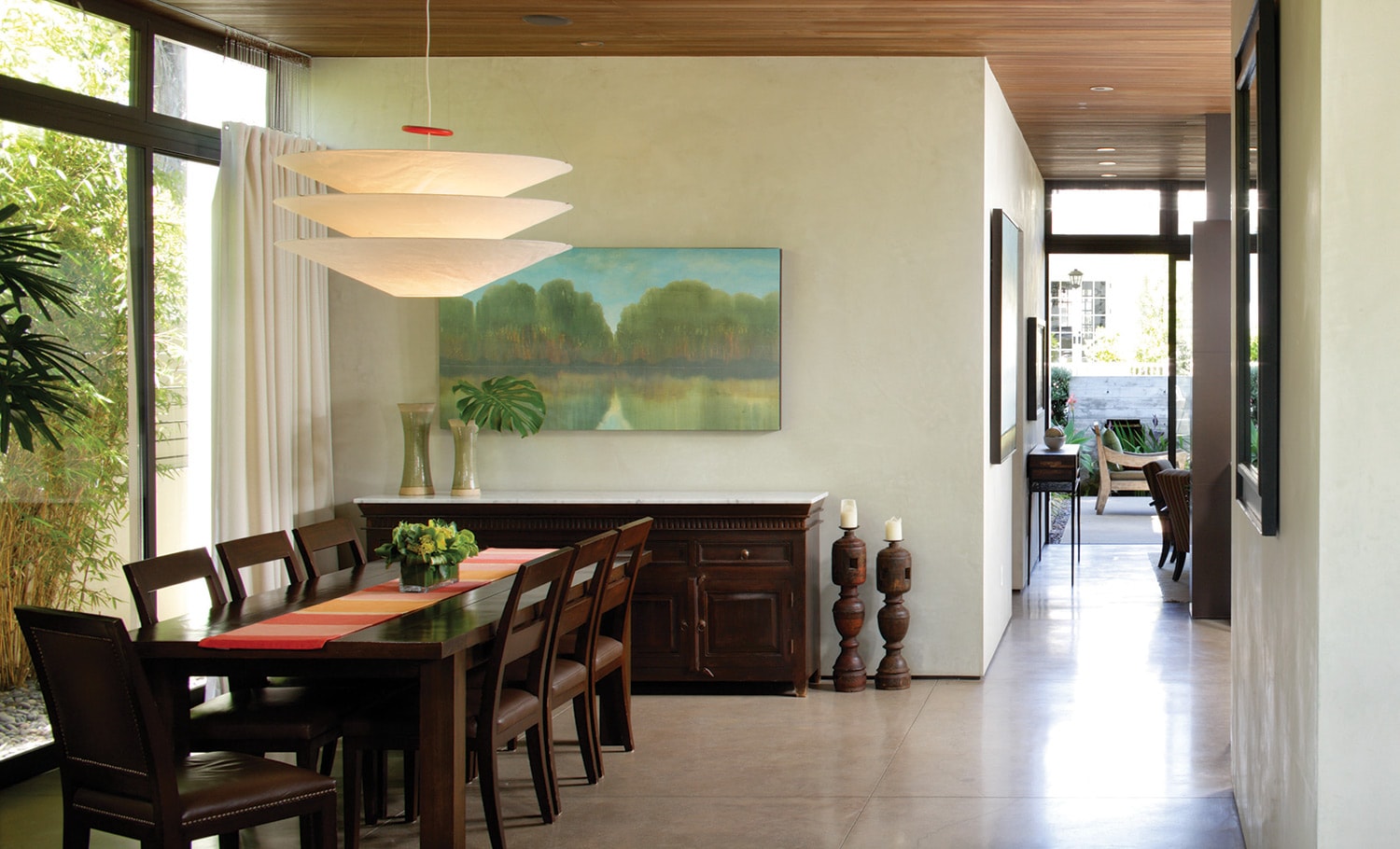 Even on the narrow, contained lot, windows open onto pocket gardens and light floods every room. Photos: Erhard Pfeiffer 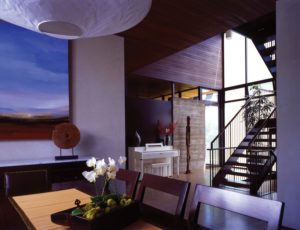 The piano in the entry to the architect’s home was a wedding gift from his father to his mother, an opera singer. Kirkpatrick’s wife had it lacquered white. He found the whimsical wooden statue in a shop, and it’s guarded the door ever since. 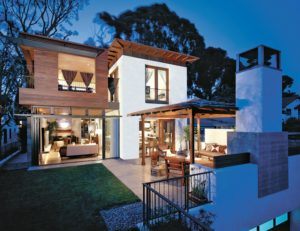 From the rear, the home’s two volumes reflect the architect’s influences; California Mid-century Modernism on the left, Wallace Neff-inspired Mediterranean eaves on the right. The “palapa” is their most-used area; an outdoor living room with a fireplace and TV.

Frank Lloyd Wright’s Fallingwater (where his son asked, “Dad, why are you crying?”). Wright had been commissioned to build beside the stream, but had realized that cantilevering the house over the water elevated it from beautiful but quotidian, to transcendent. On the flight home, Kirkpatrick imagined a curving, stepped base below the rectilinear Balance Hill. It elevated the design into the realm of unforgettable.

Contrast that with 31st Street, a 13-year-old house in Manhattan Beach’s Tree Section. The home is two plaster volumes with a loft-like center, set on a 40-foot-wide lot amid eucalyptus trees. It’s Kirkpatrick’s home. The lot seemed to call for a treehouse, and Kirkpatrick managed to pay tribute to his inspirations, Wright, Schindler, and Neutra, as well as Wallace Neff, who expanded Spanish Colonial and Mediterranean architecture to suit California lifestyles. The house has no central air conditioning or heat, merely radiant polished 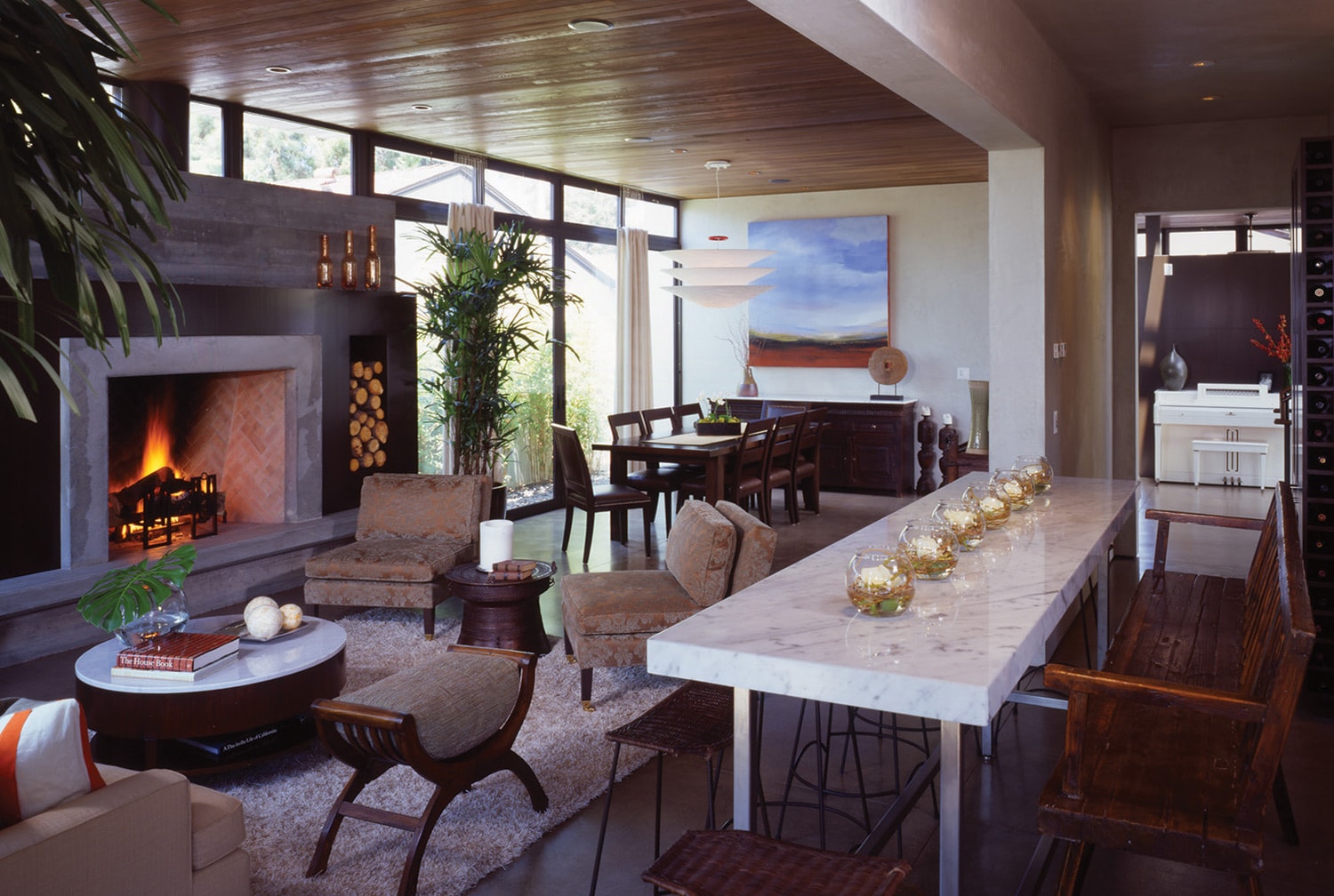 cement floors in a pale gray shade. Light enters from all four sides. This year, the last of the Kirkpatricks’ three children is leaving home, but the house remains as it was designed, with only one change: The office has been converted into a bar. 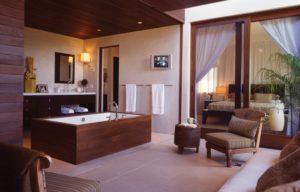 The open master bathroom has a wood-encased bathtub and enclosed shower. Sliding doors open to the bedroom. Photo: Erhard Pfeiffer

The firm works on about a dozen houses per year; any more would preclude the kind of attention they give to each. Designs commence with a study of the site and talks with the clients on what they envision and need. Then the firm presents four or five possible schemes. These — though Kirkpatrick calls them “pretty cooked out” — are really meant to provoke more revealing reactions from the client. The next round will be down to three possibilities, and finally, one.

“Everyone wants to go, go,” he says, “but this kind of one-off crafted morsel takes three to five years in total.”

For clients who’ve been with the firm for years, it’s worth the wait.