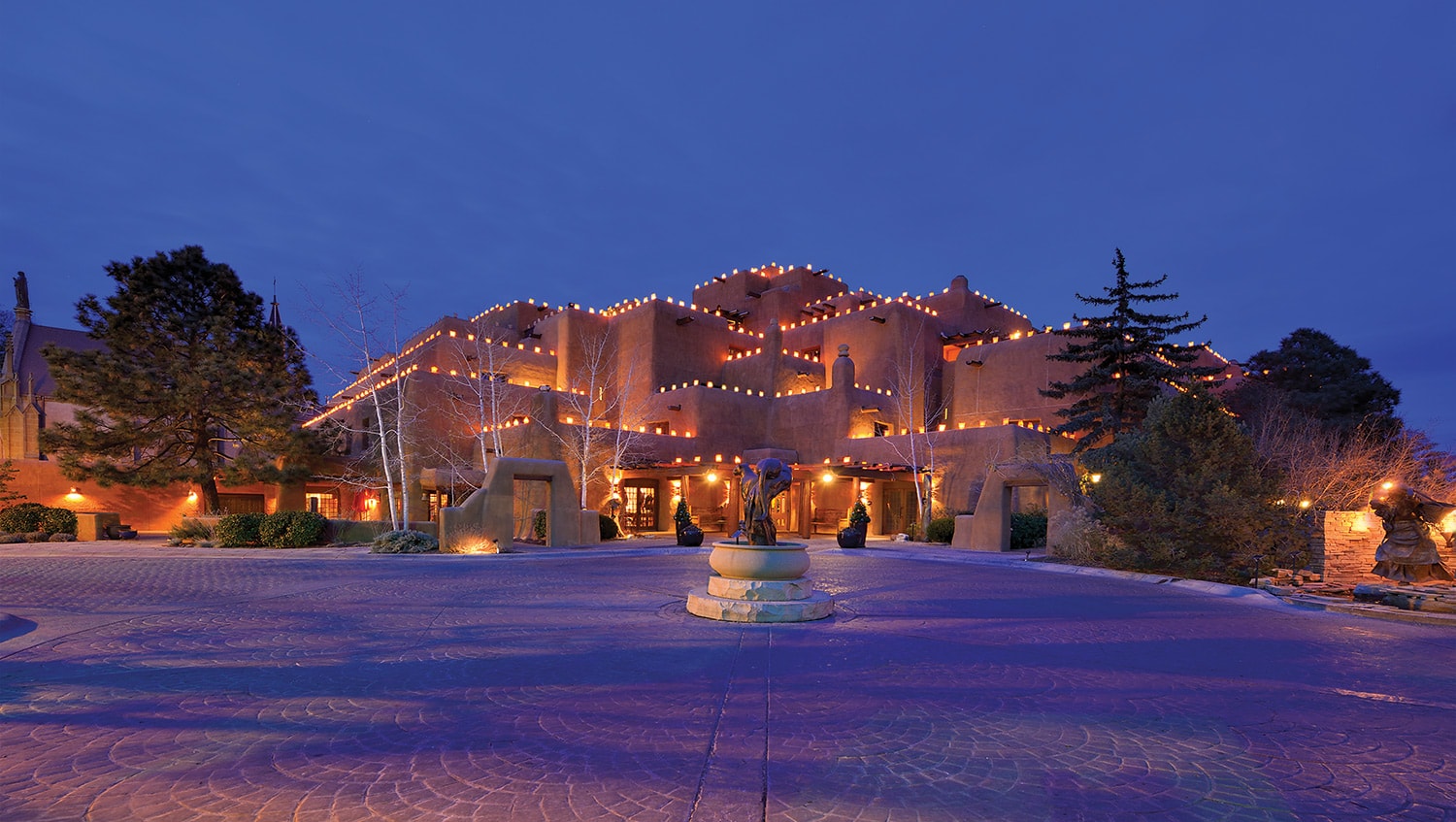 Visitors and locals alike are treated to the beauty of the luminarias outlining the steps of the adobe-style hotel. Images courtesy of Heritage Hotels & Resorts

16 Jul Western Landmark: The Inn and Spa at Loretto

In 1853, after an arduous journey from Independence, Missouri, to the territory now known as Santa Fe, New Mexico, the Sisters of Loretto founded the Academy of Our Lady of Light, a Catholic school that grew from small beginnings to cover a square-block near the plaza. 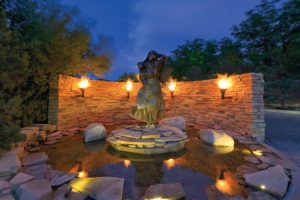 The corner of Old Santa Fe Trail and Alameda hosts changing artworks provided by one of the galleries residing at Loretto. 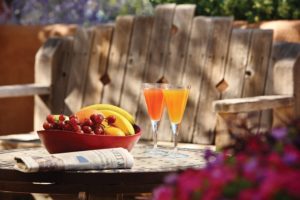 The Sisters had responded to Archbishop John-Baptiste Lamy’s pleas for clergy to teach in New Mexico Territory. Seven of them made the journey, and some of them survived a bout of cholera to establish the school. It grew to serve approximately 300 students and persevered for decades, despite smallpox and tuberculosis, leaky mud roofs, and even a brush with Confederate Texans during the Civil War.

Archbishop Lamy also hired a father-and-son team of French architects — Antoine Mouly and his son, Projectus — to build the Cathedral Basilica of St. Francis of Assisi, a Romanesque Revival landmark completed from 1869 to 1886. 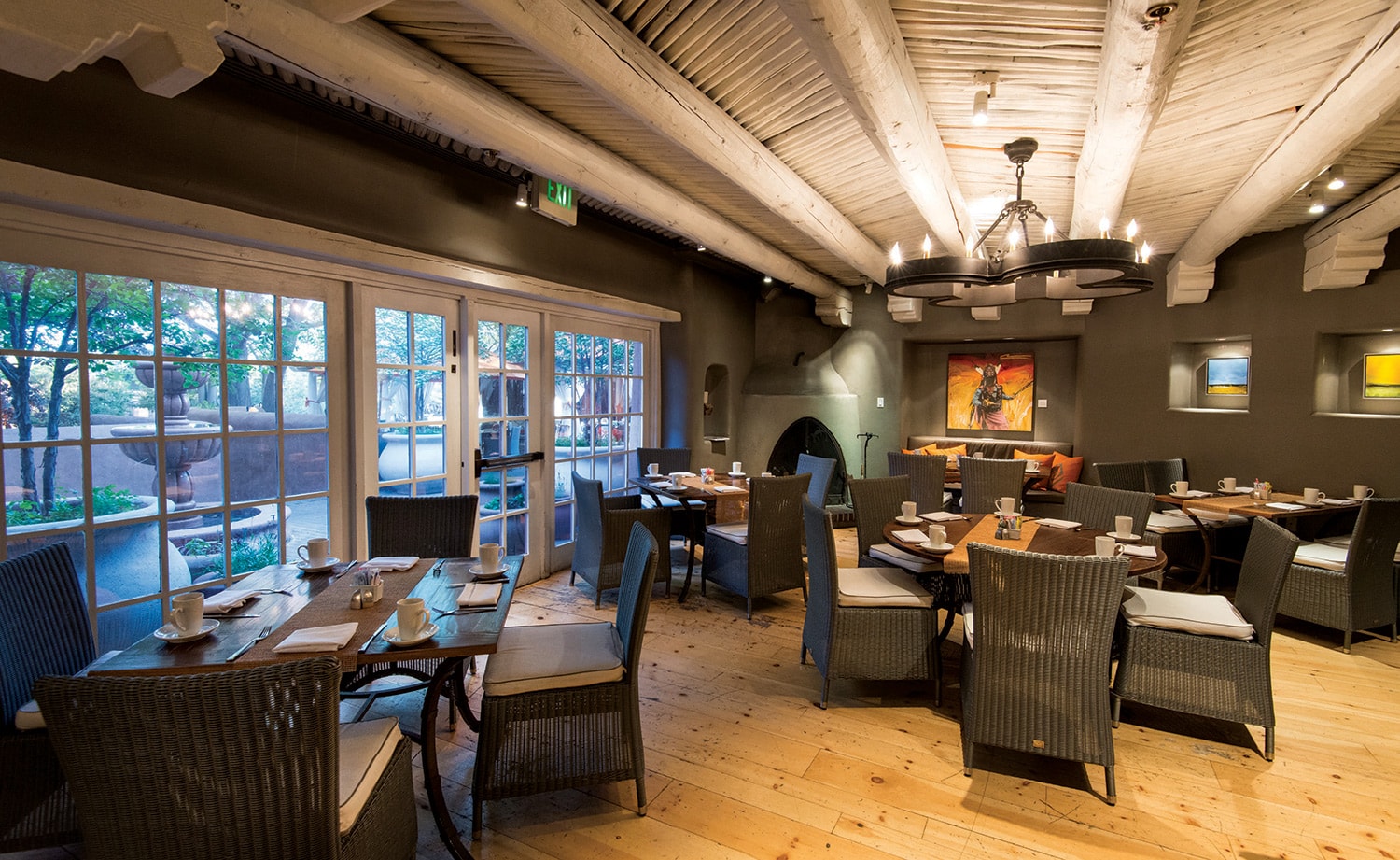 Authentic vigas and latillas adorn the ceiling of Luminaria, the hotel’s award-winning restaurant.

During the cathedral’s lengthy construction, the Moulys designed a nearby chapel for the Sisters of Loretto. The chapel was designed after the Sainte-Chapelle in Paris, which Antoine had helped restore earlier in his career and which was also the favorite chapel of the French archbishop. It’s reported that the sisters pooled their own inheritances to raise the $30,000 required to build the beautiful, Gothic structure. 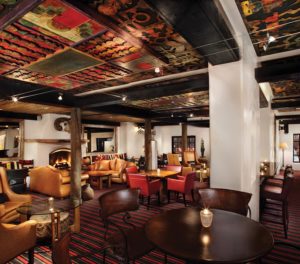 The Living Room, a favorite lounge spot, features a hand-carved and painted ceiling. 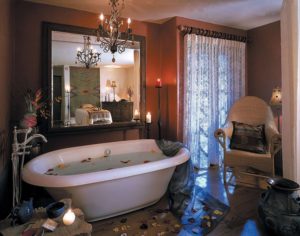 Spa treatments with local products are a specialty.

Perhaps the pièce de résistance of the Loretto Chapel is its miraculous staircase. Built between 1873 and 1878, when wagons rolled past on the Old Santa Fe Trail, the spiral staircase is more than 20 feet tall with no means of support — it is constructed without glue and nails, using only wooden pegs. Creating a mystery one yearns to investigate, the circumstances surrounding its construction were considered miraculous by the Sisters of Loretto, who credited St. Joseph as the builder. 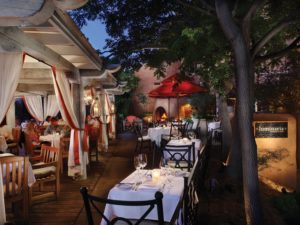 Outdoor dining is both intimate and elegant on the patio. 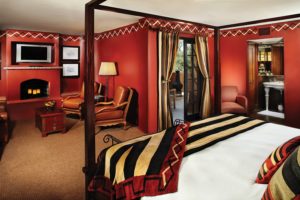 Rooms are warm and welcoming with rich Southwest colors and furnishings.

Today, the chapel and the miraculous staircase operate as a private museum. The Loretto Academy buildings deteriorated after 115 years of use, closing in 1968.

But James Kirkpatrick and his family envisioned the old, abandoned school as a hotel and acquired the 4.5-acre property. By 1975, the Inn and Spa at Loretto was born.

Kirkpatrick chose architect Herald Stewart to refurbish the inn. Stewart proposed several designs, but it was a four-story, Pueblo-style building that won approval by Santa Fe’s notorious historic review board, known for being sticklers for maintaining “Santa Fe style.” Two of Santa Fe’s most venerated architects, John Gaw Meem and William Lumpkins, sat on the review board. Meem was said to have been ecstatic at seeing the Pueblo-inspired design, praising Stewart by saying, “I could kiss you! Finally, someone gets my vision.” And it would seem his intuition was accurate, as Santa Fe’s current popularity is due, in large part, to its notorious Pueblo Revival architecture. 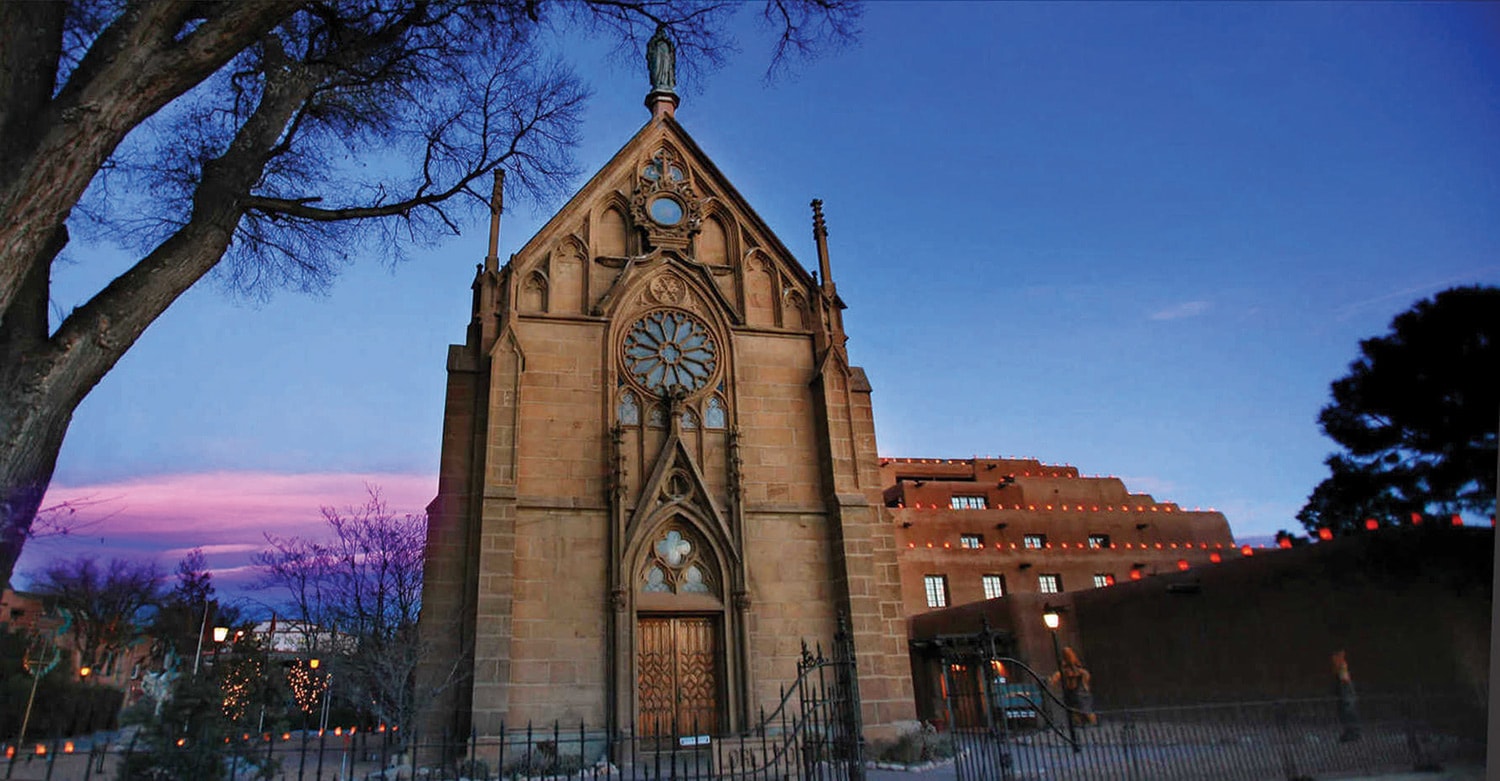 Designed after a Parisian chapel, the gothic Loretto Chapel was built by a father-and-son architectural team.

The transformed school is a true, iconic Santa Fe landmark, well known for the luminarias that light the multi-level structure at Christmas time. The Inn and Spa at Loretto embody the history of the region, not only in its architecture but also with its casually sophisticated guest rooms that include kiva fireplaces, hand-carved furnishings, and Native American weavings. 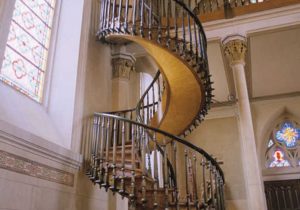 The chapel’s miraculous spiral staircase was built without nails. 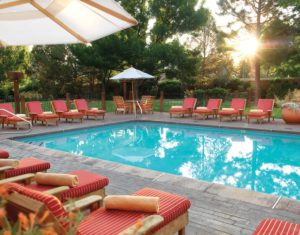 The warm Southwestern sun encourages relaxing by the pool.

The public spaces feature original works by Santa Fe artists, including Armond Lara and Gregory Lomayesva. Lara’s painted and beaded canvases hang throughout the inn, while Lomayesva’s work is seen in the hand-carved and painted ceiling of the popular lounge.

To add to the delight of its art-loving guests, the inn also hosts several galleries. And Luminaria, the inn’s restaurant, evokes charm with an inventive rustic yet sleek décor, where guests enjoy fresh, organic cuisine. Its outdoor patio is made intimate with white draperies and chandeliers adorned with amethyst crystals.

The Inn and Spa at Loretto shares its history with Santa Fe, and is continuing to help that history grow, providing memorable experiences for visitors today. 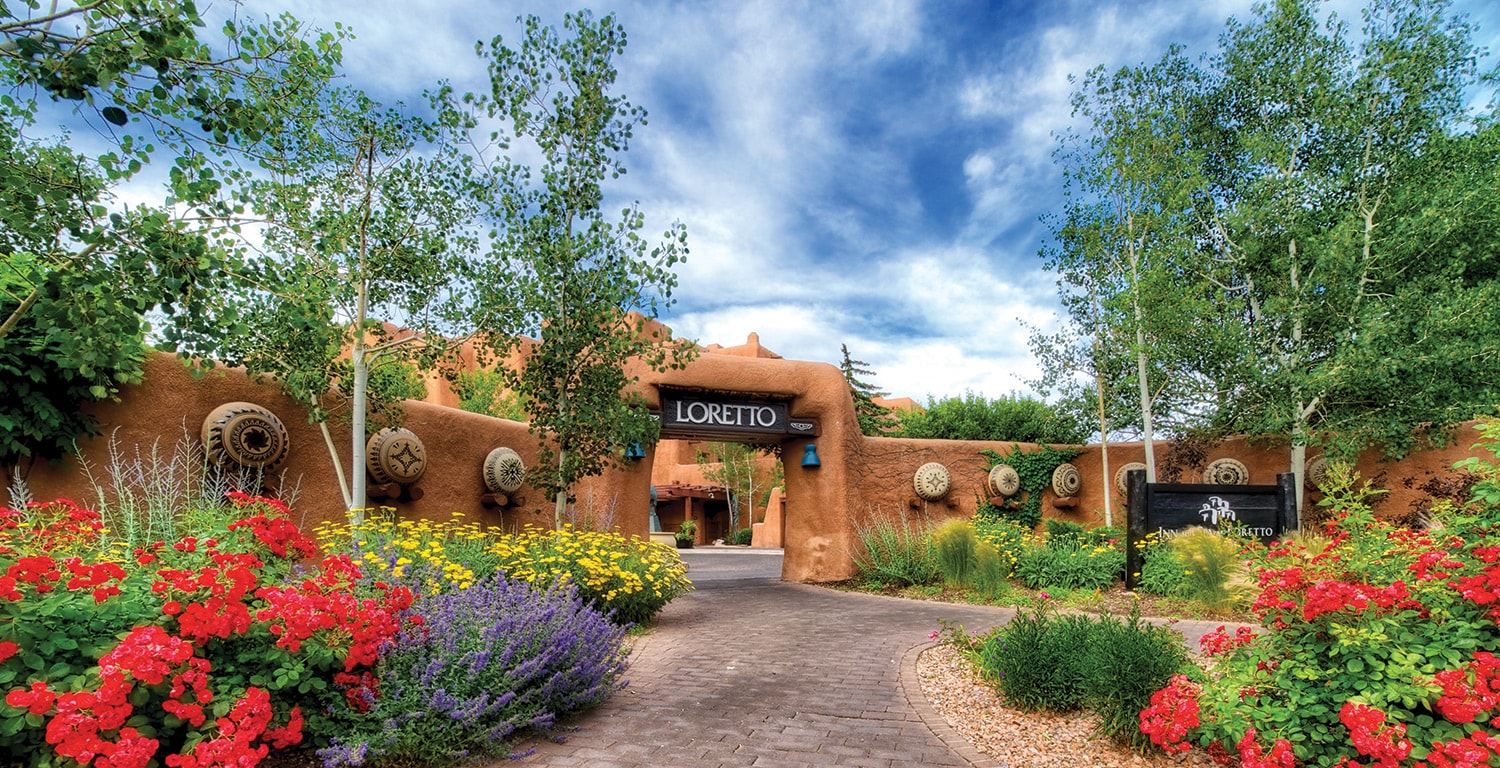 At the curved entryway of the inn, colorful flower gardens greet guests.