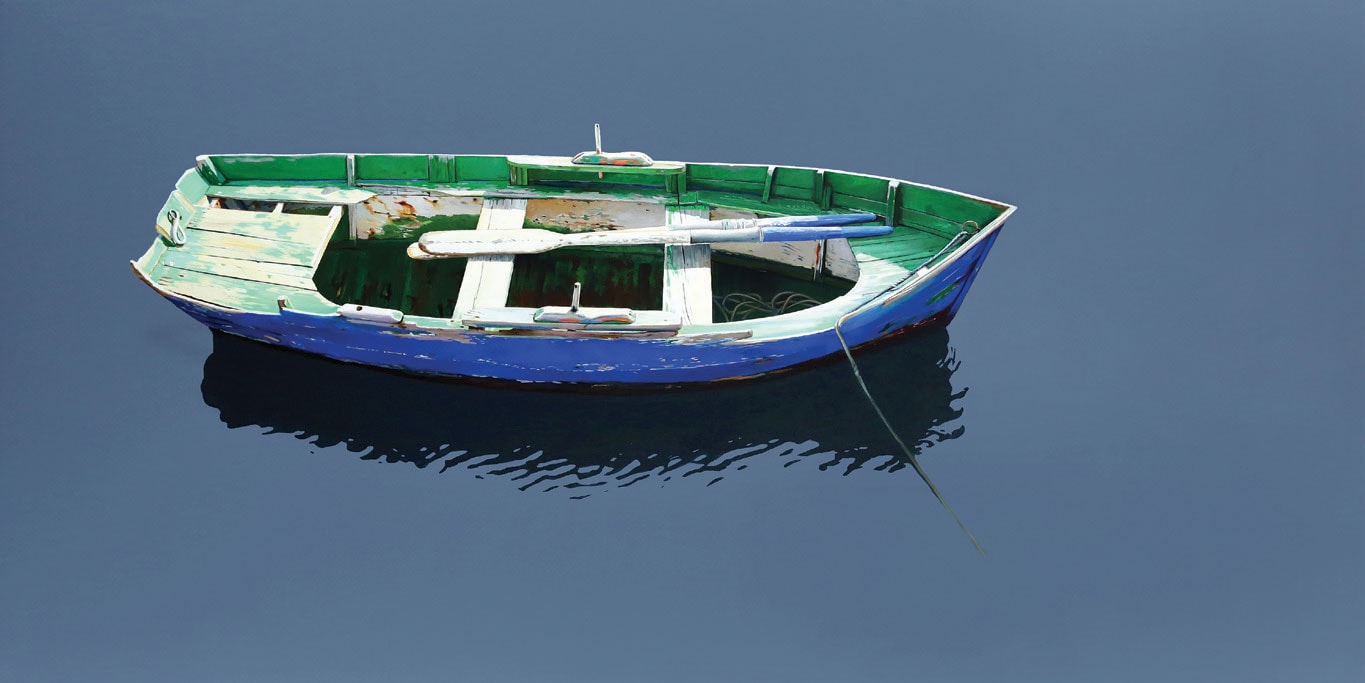 Spoken through the language of color, Roger Hayden Johnson applies a meditative sheen on his paintings of small rowboats. Devoid of figures or movement, the imagery rivets the mind.

Johnson likens his repetitive use of small, often broken, and crudely repaired boats to Chinese scholar’s rocks or Japanese suiseki, both are naturally weathered rocks used in gardens to invite contemplation of nature. The boats speak to the effects of time and weather and act as a barometer for humanity.

“Although boats are man-made, we can read in older boats the effects of a hard life on the sea in their multiple layers of chipped and sun-bleached paint, worn edges, scraped sides, broken trim, and oarlocks,” Johnson says. “With careful observation, we can also trace the hand of man in a near-narrative of creation, use, and repair in these often beautiful and undeniably sculptural, though functional, objects.”

These portraits reflected in still water seem at once solitary objects imbued with meaning, and yet their simple setting invites a symphony of voices from a complicated past. “I like for the paintings to make people contemplate what they’re seeing,” the Colorado-based artist says. “I find them interesting because of all the changes that have taken place since they’ve been made, evidenced by chips of paint and the broken parts that have been inexpertly repaired.”

For Johnson, both the boats and those improvised repairs are fascinating. Since he’s been painting, he’s eliminated anything that takes away from the actual boats, leaving him with the task of working with color and how the light affects the vessels, shadows, and glass-like water. There isn’t a horizon line. These boats sit, omniscient, surrounded by the infinite. 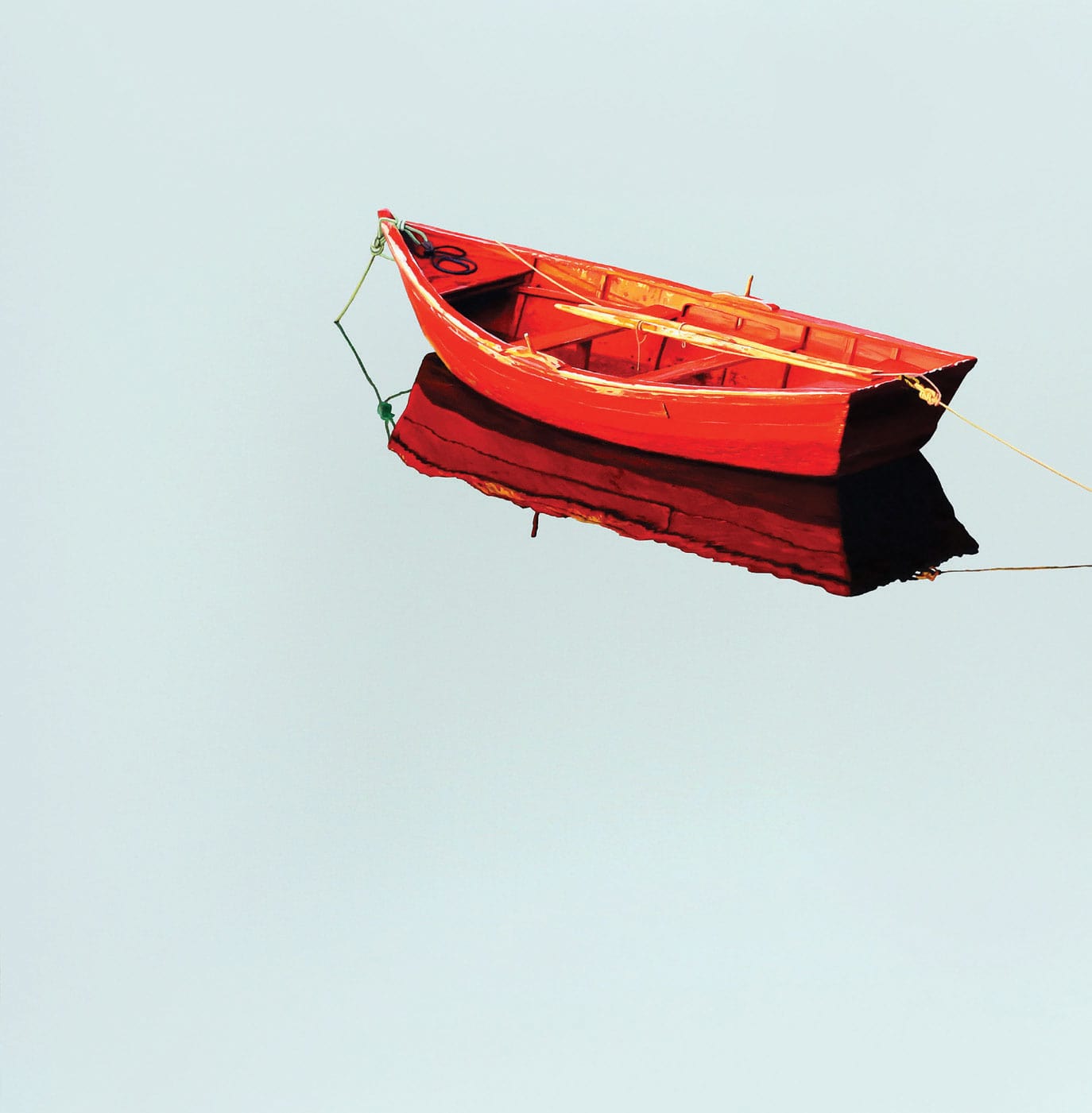 “I’ve been interested in how one color affects another one; it’s all about keeping everything in balance,” Johnson says. “Contrast between light and dark, color complements, it’s almost like a game for me. The game is getting everything perfect, in balance … even situating the boat within the square of the canvas … the weight of the image, suspending it within the canvas like a spider’s web.”

Johnson feels as if there should be a figure in the boat, but he’s not interested in that. Once a figure is introduced, the focus is no longer on the boat, the colors, or tranquility of the water reflecting possibilities. It’s enough for the boat to be the subject. Within that, the viewer can conjure their context.

The images Johnson uses for his paintings stem from his trips to Santiago De Compostela in Spain, a historical pilgrimage site from the Middle Ages. The name translates into “Saint James of the field of stars,” because the pilgrims thought they had reached the end of the earth. Pilgrims would go from the cathedral to the coast and burn a piece of their clothing as a symbol of renewal. 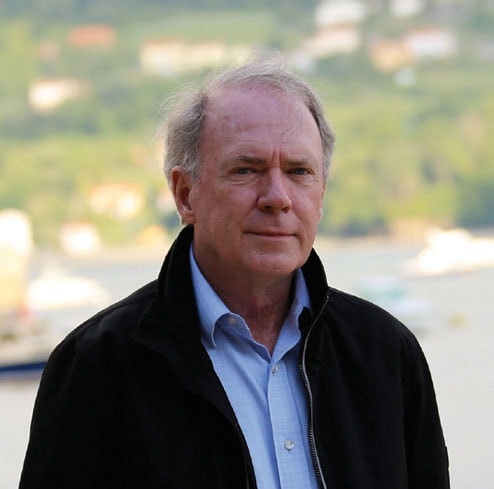 “That little harbor is where I find the very best boats,” Johnson says. “I’ve gone back for the last nine years, spending weeks there, going to all the beautiful little harbors and taking photographs.” When he plans to be in one place long enough for his oil paints to dry, he takes his box easel and lighting to paint at night. “In that place, there’s a thick layer of history. You can see the Milky Way; you can really see that sweep of stars.”