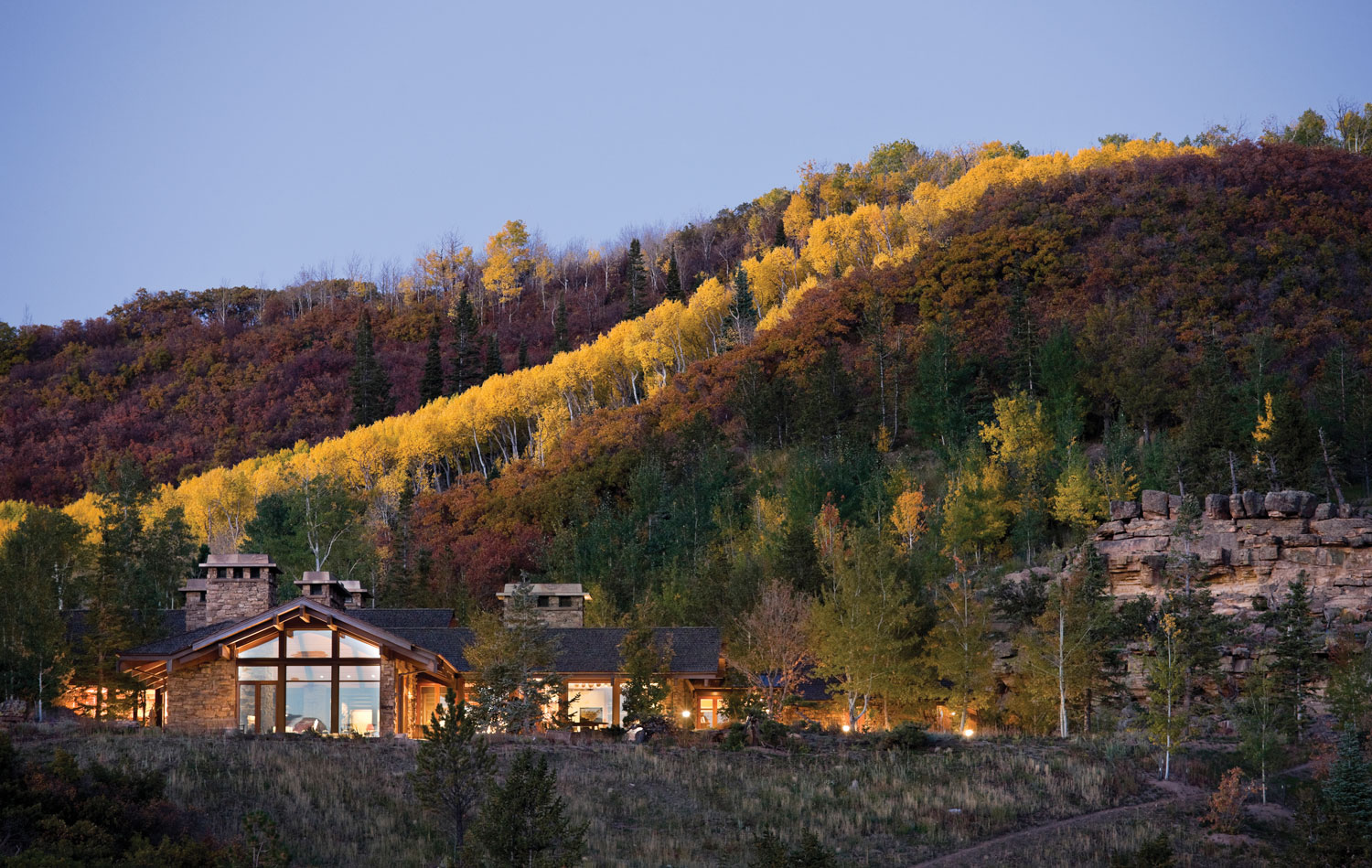 Set at the base of rolling hills and facing south across a valley in the Rocky Mountains, the completely remodeled house gained a fresh, expansive outlook on its setting with the help of a raised gable above the living room. The view was previously truncated by a low, flat roof. The home’s eight chimneys, five of which are visible here, were reclad in Colorado moss rock. The rock cliff to the right was built to expand and define the main approach to the house.

THE SETTING WAS NOTHING SHORT OF EPIC. With 270 acres of private land in a Rocky Mountain valley, backing up to pristine Bureau of Land Management wilderness, and no neighbors in sight, the Colorado estate offered a true Western idyll, complete with sweeping vistas of meadows, woodlands, and distant towering peaks. Owls swooped by. Elk grazed in plain sight. What could be better? 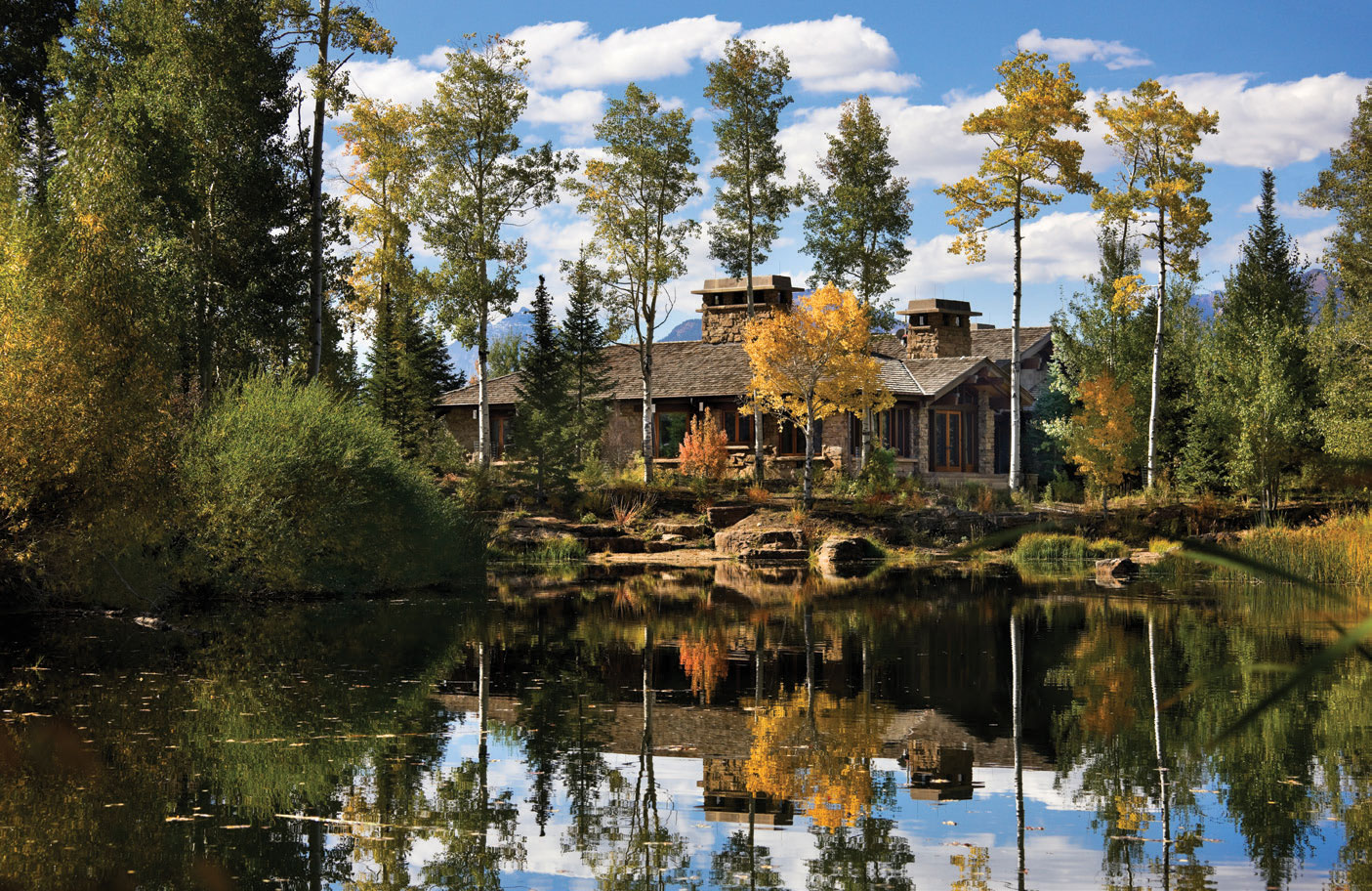 Behind the house, one of two existing ponds is stocked with rainbow trout. Mature native trees were planted on the property to help the house feel nestled in its landscape.

“Frankly, the house was terrible,” says Thomas A. Kligerman, a partner at Ike Kligerman Barkley, the architectural firm called on to remedy a residence that in almost no way reflected the spirit of its surroundings. A sprawling structure built in the late 1960s, it featured exterior stucco walls beneath low ceilings. Flat roofs truncated the most desirable views, which were further sliced up by a series of slit-like living room windows just 8 inches wide and 6 feet tall. Worse still, the floor plan was baffling, including a little-used, indoor swimming pool that occupied prime floor space and further complicated the illogical traffic flow. “You couldn’t get to a lot of rooms without walking through other rooms,” Kligerman says, adding that the exterior organization wasn’t much better. “It was hard to even find the front door.” 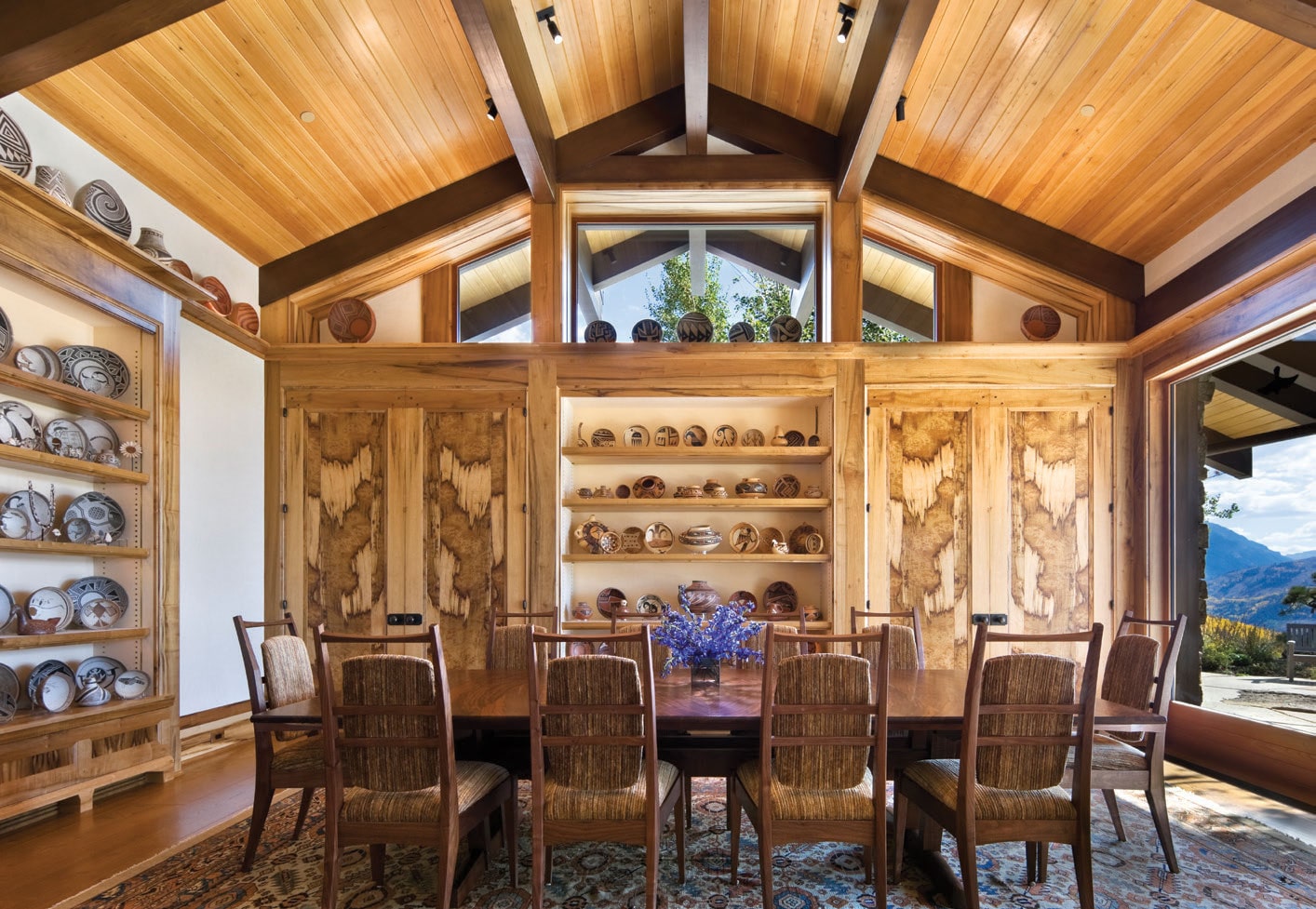 In the dining room, custom cabinetry from Kol Industries fea- tures spalted alder — wood patterned by natural fungi in the trees — that creates an elegant, yet rustic effect. A clerestory window in the raised gable helps bring in natural light from two directions. 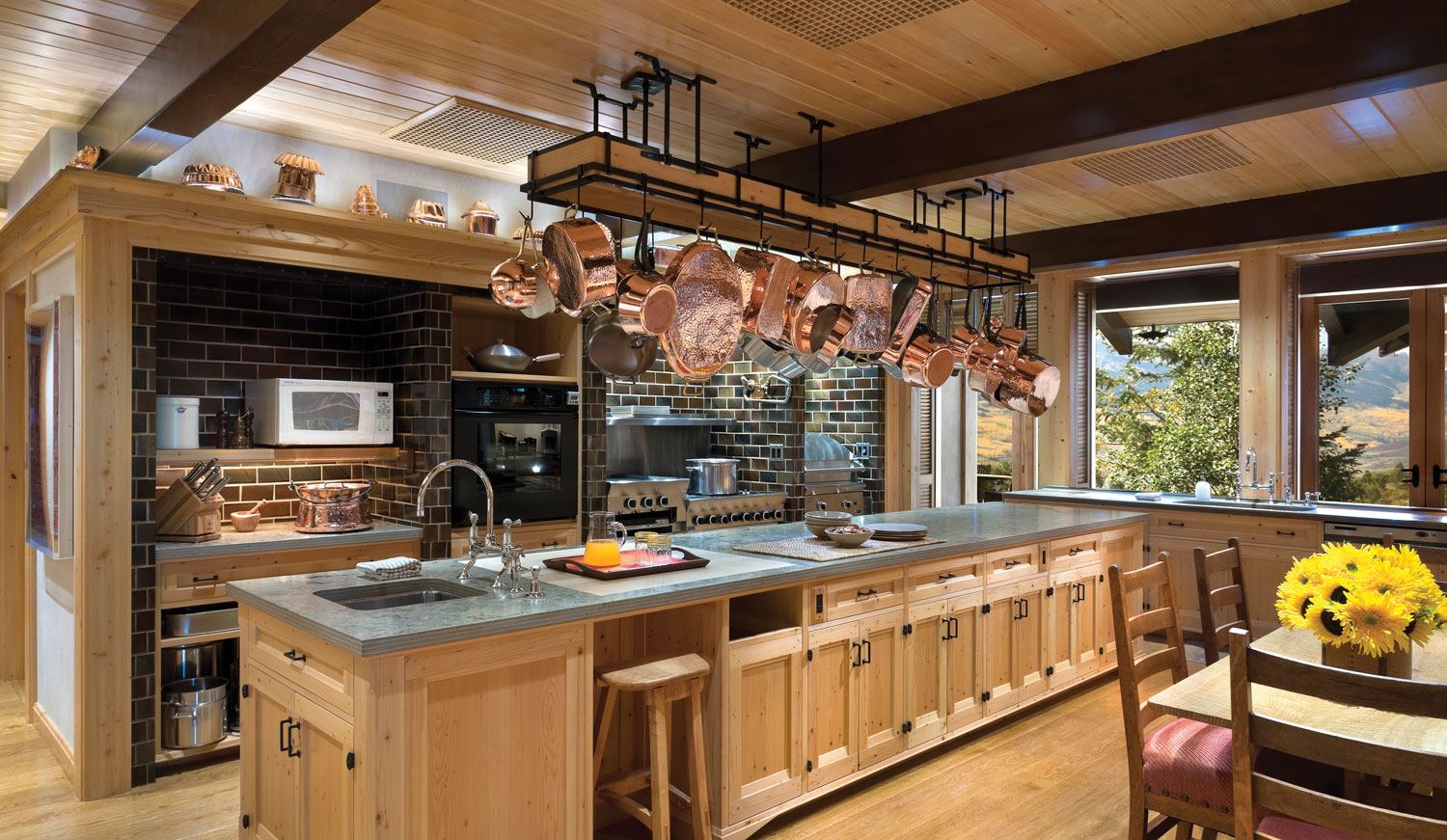 Along with its surroundings, however, the house did have one thing to recommend it, or rather eight things: its fireplaces. Located in a county that had banned woodburning stoves some years after the original construction, those coveted hearths were grandfathered in — just so long as their locations weren’t changed or the building’s footprint otherwise altered.

So, recalls Kligerman, the home’s reconfiguration began in the most basic of ways. He spread the original floor plan across a table. “And I laid a piece of tracing paper on top and traced just those fireplaces,” he says. Then, with a lot of trial and error, he and his clients came up with a new four-story 11,000-square-foot layout that “made a good house out of a nonfunctional one,” a vision brought to life by Hansen Construction over the course of almost three years. 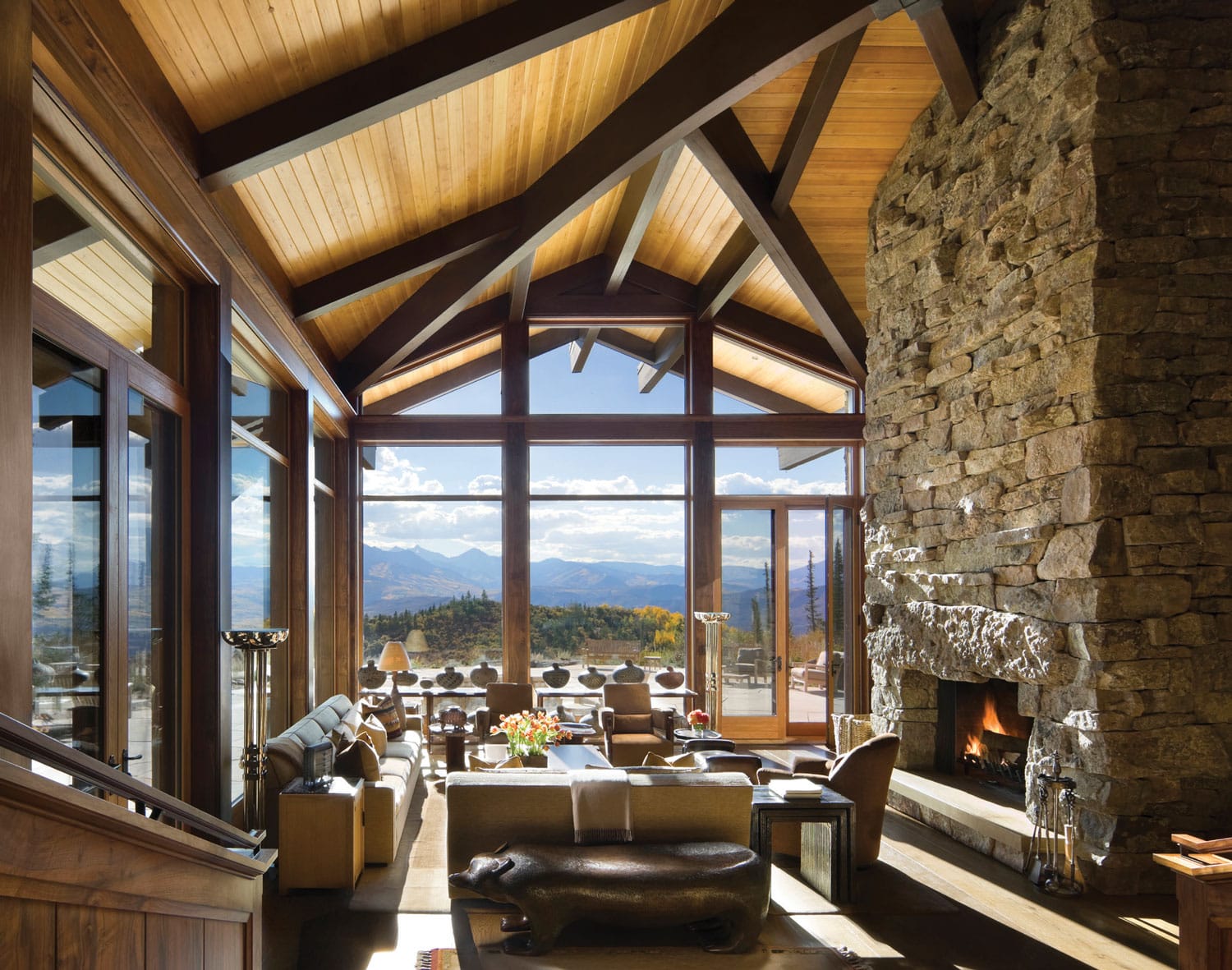 Stairs lead from the entry hall to the living room, which is crowned by a vaulted ceiling clad in Western larch with stained glulam beams. For the oversized 14-by- 18-foot floorboards, appropriate to the room’s grand scale, the architects imported white oak from Germany, an exception to the predominately Western woods used in construction.

Throughout the house, spacious new hallways not only brought order to both public and private areas, but also provided ample shelving to display the family’s extensive collections, including Native American handiworks and other tribal collectibles from around the globe. Half of the space once occupied by the swimming pool became a spacious family room, the other half became one of four bedroom suites. 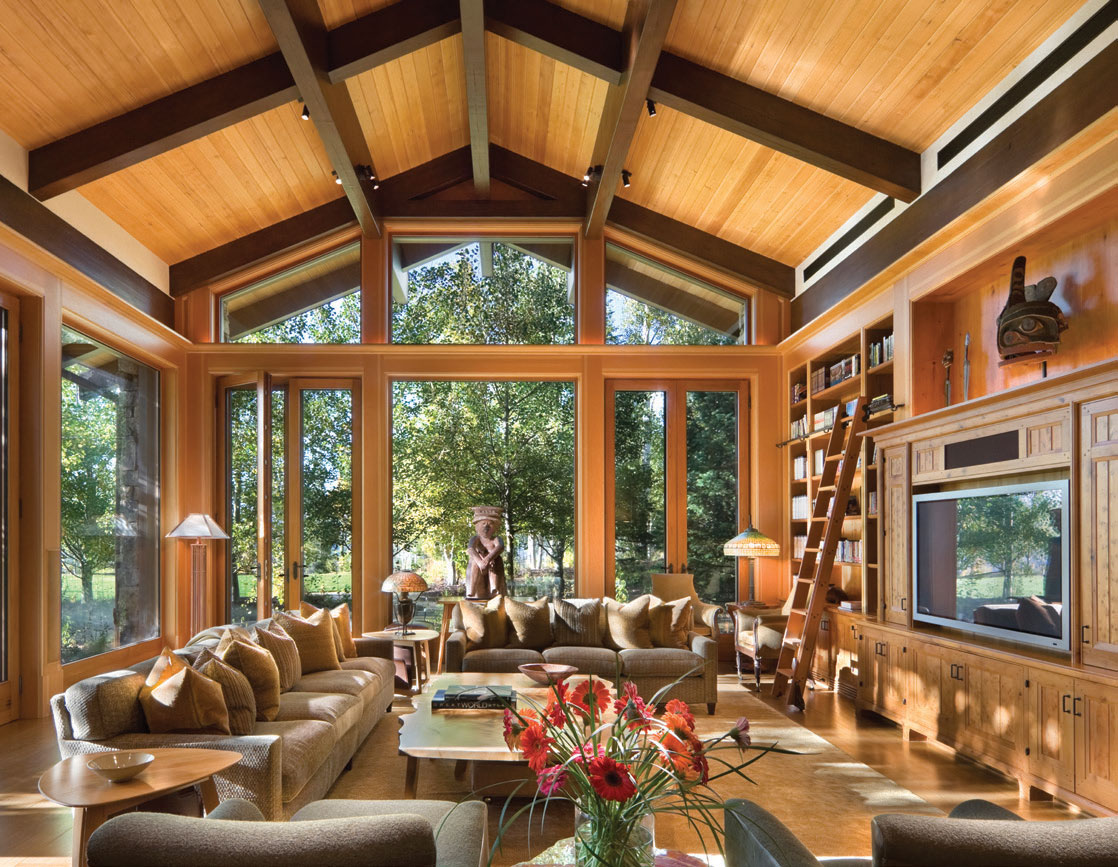 The family room was carved out from a space formerly occupied by a little-used indoor swimming pool, with the once-flat ceiling raised to a more commodious 17-foot height. Western yew cabinetry and old-growth Douglas fir paneling enhance the casual ambiance.

As creatively as the floor plan was reorganized, so too were the home’s elevations transformed. Low, flat roofs gave way to sloping ones that made ceilings as high as 17 feet possible, with window walls that frame not only the mountain peaks but also the skies above them. “Before,” notes Kligerman, “the house was just sitting on the site. Now, it feels like it’s truly part of the site.” 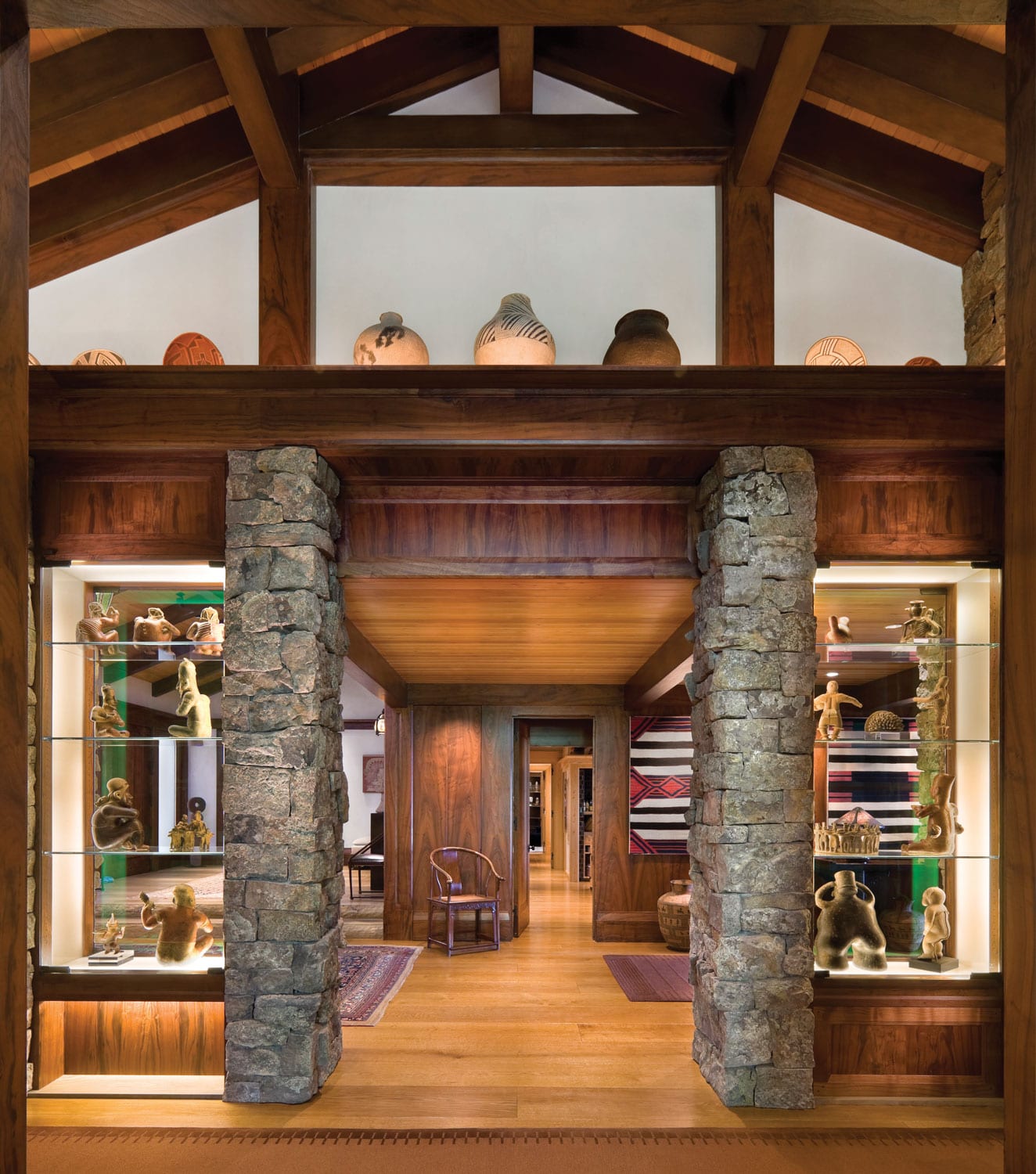 Viewed from the family room, a passageway flanked by stone columns crosses the home’s main hallway and accesses the kitchen and a sitting room. Throughout the home, glass-fronted and interior- illuminated display cabinets — as well as lofty ledges — feature the family’s extensive collection.

Credit for that sense of harmony goes to the architectural style arrived at by Kligerman and his clients, and deftly brought to life by Aspen-based Hansen Construction, led by president Steve Hansen, project manager Brent Smyth, and a team of workers and craftspeople numbering close to 1,000.

The owner’s request that they use materials largely indigenous to the Western U.S. led Kligerman to design a structure he describes as inspired by what early 20th century American Arts and Crafts masters Greene and Greene achieved in their Southern California home designs, “but on a much larger Rocky Mountain scale.” That led the team to assemble between 15 to 18 different species of wood, including honey-hued, fine-grained Western yew; Claro walnut, which has a rich, almost marbled pattern; vertical-grain Douglas fir; and, on the exteriors, teak for its water-resistance and longevity. The palette of stones used inside and out was also intriguingly varied, including lichen-speckled Colorado moss rock for exterior walls and interior fireplace surrounds; terraces of buff-colored Colorado sandstone; and polished limestone complete with fish fossils from Wyoming’s Green River Basin on the kitchen counters and bathroom walls. 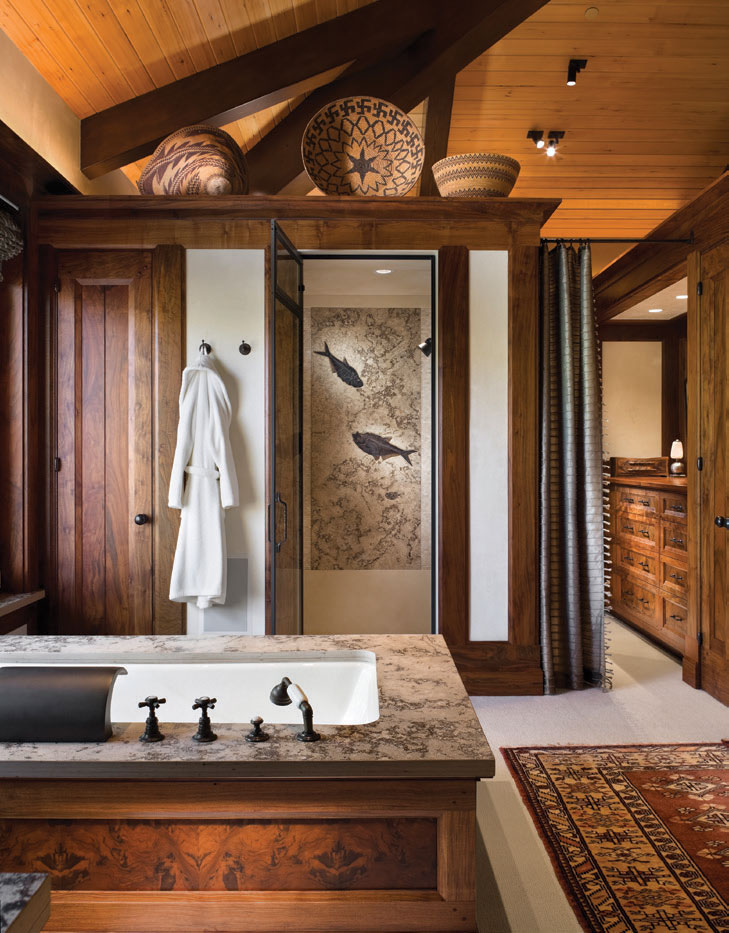 Completing the retreat’s transformation, the immediate surroundings gained serenity and beauty through landscaping with mature native trees, local grasses, and sandstone terraces. In these and so many other large and small ways, notes architect Kligerman, no effort was spared “to root the building in the history and ecology of its area. And that, I think, is how you strengthen the meaning of a home.” 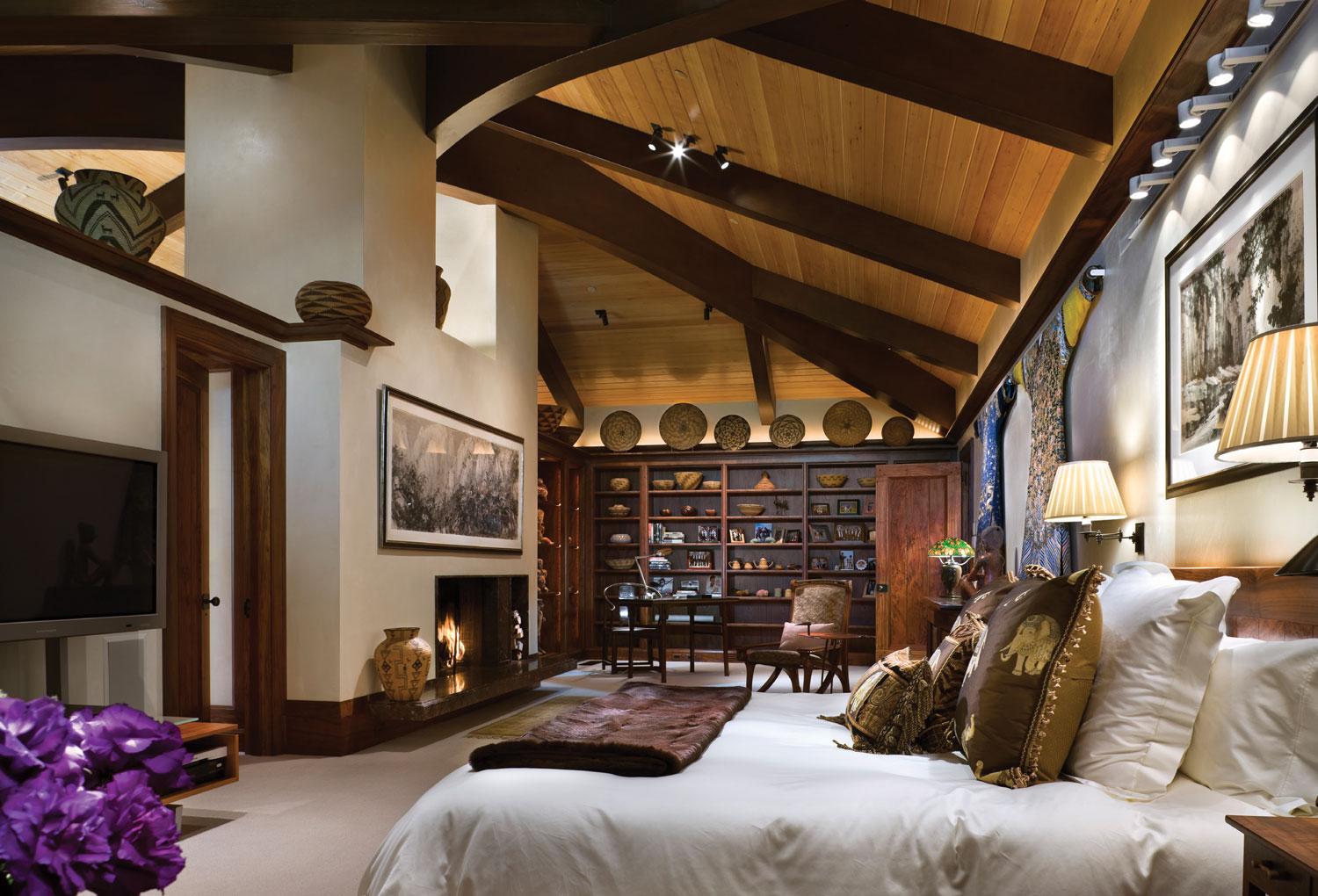 The master bedroom was one of only two rooms in the original house that had sloping ceilings, and the architects brought new definition to the space by stripping the black glulam beams, repainting them dark brown, and paneling the space between them in larch. The doorway to the left of the fireplace leads to a private sitting room.