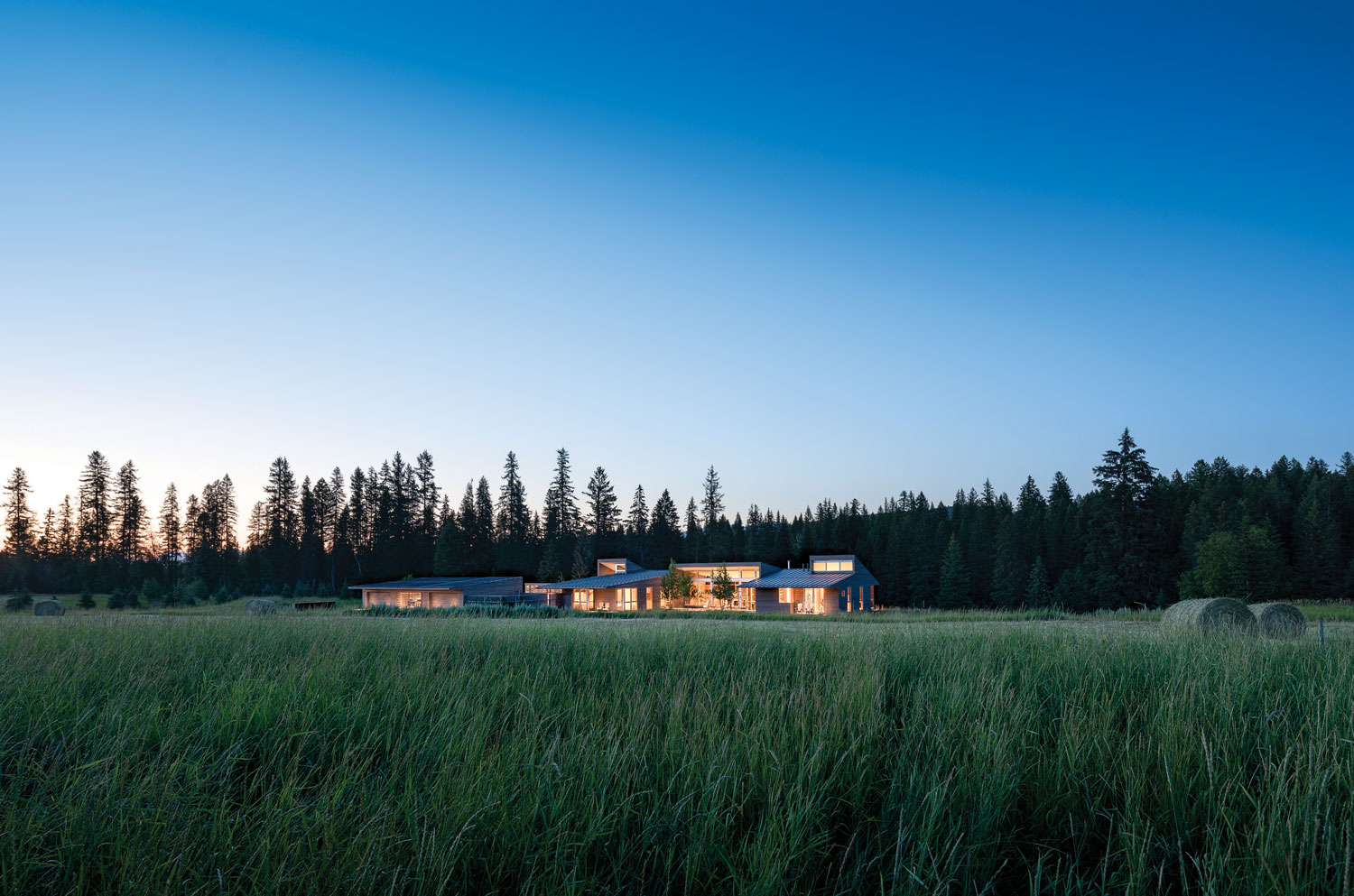 Stillwater illustrates Prentiss Balance Wickline’s “Natural Modern” style. The home is clad in beetle-kill pine with bonderized metal roofing. It’s set in a meadow above the river and bordered by a neighbor’s hay field.

Some architects say the fun of problem-solving keeps their practices vital. But those at Prentiss Balance Wickline (PBW) say that it’s finding a site’s potential that excites them. That may sound like an optimistic way of expressing the same concept, but after a discussion with principals Tom Lenchek and Dan Wickline, the difference in approach becomes clear. 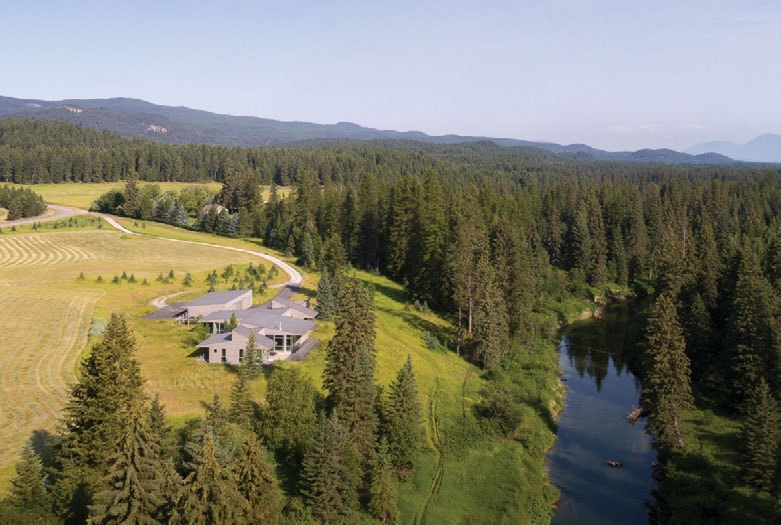 In an out-of-character move, the angle of the river-slope was substantially lowered and the excess earth was turned into berms to provide silence and privacy. Photos by Andrew Pogue

The three-year-old Seattle-based practice is a merger between two well-established firms, both of which focused on sustainability. Prentiss Wickline had done a significant portion of its work in the San Juan Islands, and Balance in eastern Washington’s Methow Valley and the mountain states, although both firms also designed a substantial number of urban projects.

“Our merger brought together similar ways of working but with different expertise and diversity in the ways in which we were thinking,” says Lenchek.

“At the same time, we became a medium-sized firm,” Wickline adds, “which gave us a lot more intellectual horsepower and the ability to complete more projects.” 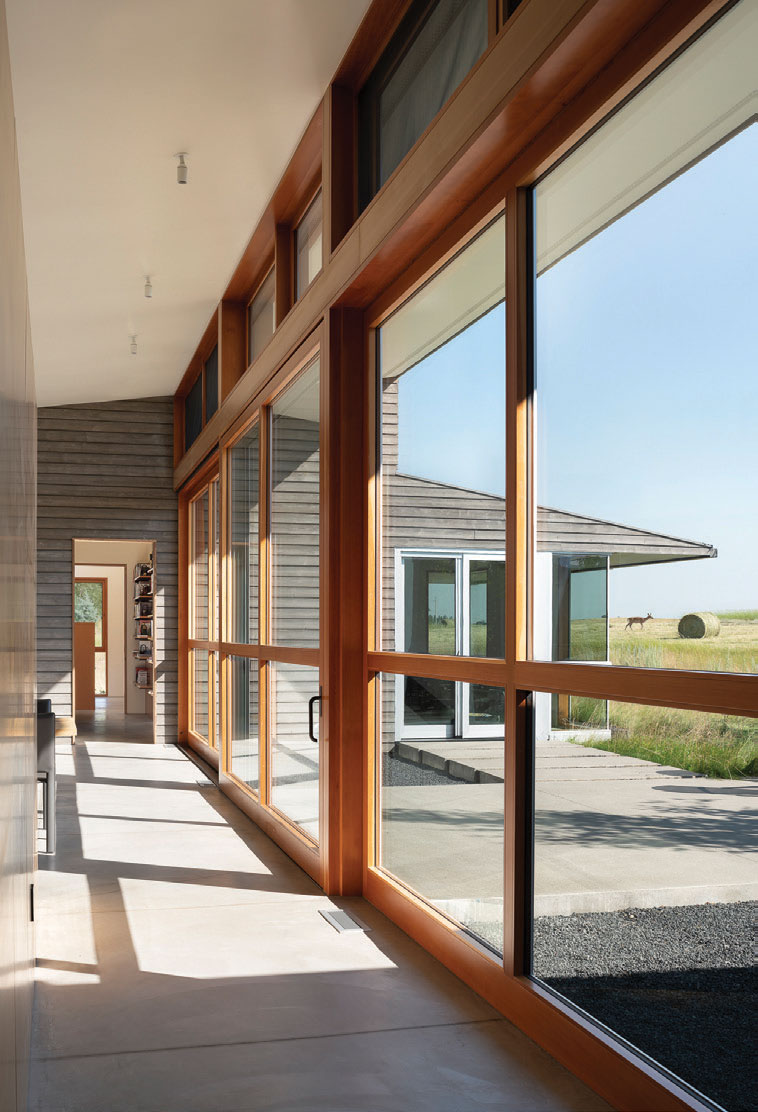 Stillwater’s long central hallway opens on either side to discrete rooms and corridors, creating courtyards for outdoor seating. The northside offers views of the river, and the southside captures warmth from the sun.

Their designs — elegant, simple, and modern — are unique, dictated by their sites. The firm’s approach, once they’ve assessed the client’s desires and needs, is an in-depth analysis of the property. And in some cases, clients have sought their advice even before buying real estate. “We’re looking at the topography, vegetation, views — how the wind moves across the site, how the sun tracks,” Wickline says. “We document that and use the analysis to begin our design process. In that way, we try to tap into the potential of the site for each project; and in that way, they become unique projects.”

“Each of our houses is somewhat individual,” Lenchek says. “We’re responding to the client, climate, and context. But I think there are some things that tie them together in what we like to call ‘Natural Modern.’ We tend to use a lot of natural materials, like wood, in the interiors, so even though the houses are modern, they’re not stark. There are themes and ideas which move through our projects, but I think it would be really hard to put your finger on a specific quality in general.”

“Yes,” Wickline agrees. “Generally the projects have large glass areas because they’re responding to beautiful sites with views. But it’s not like we have a signature that you’d see and say, ‘Oh yeah, that’s a PBW project.’”

Both principals engage in the schematic designs, although everyone in the office contributes. “When we come up against something,” Lenchek says, “we go to somebody else and ask, ‘Hey, do you have an idea about this?’ It’s a pretty cohesive process.” 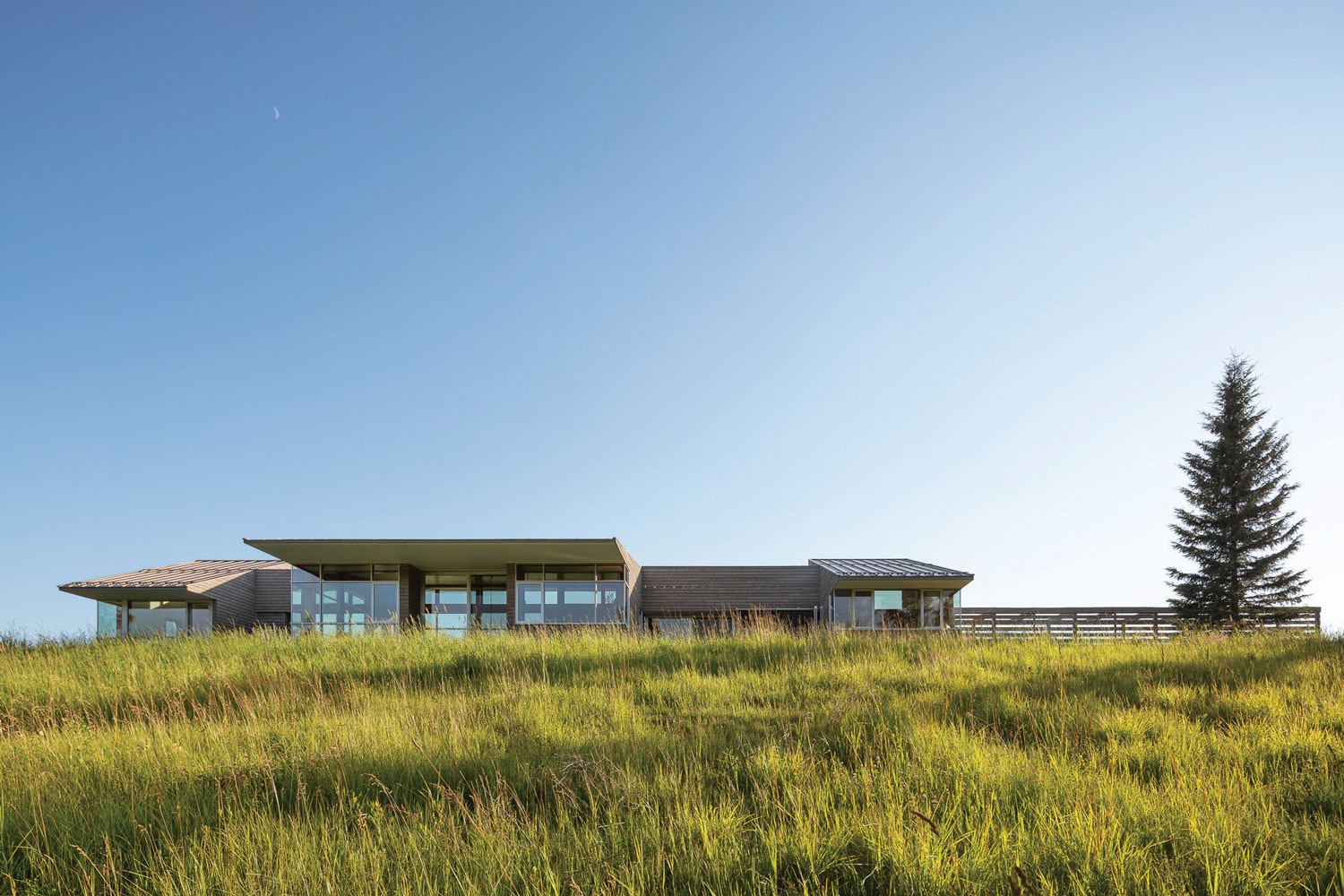 Stillwater is one with its site; views are framed in vertical grain fir and clad in metal from Quantum. 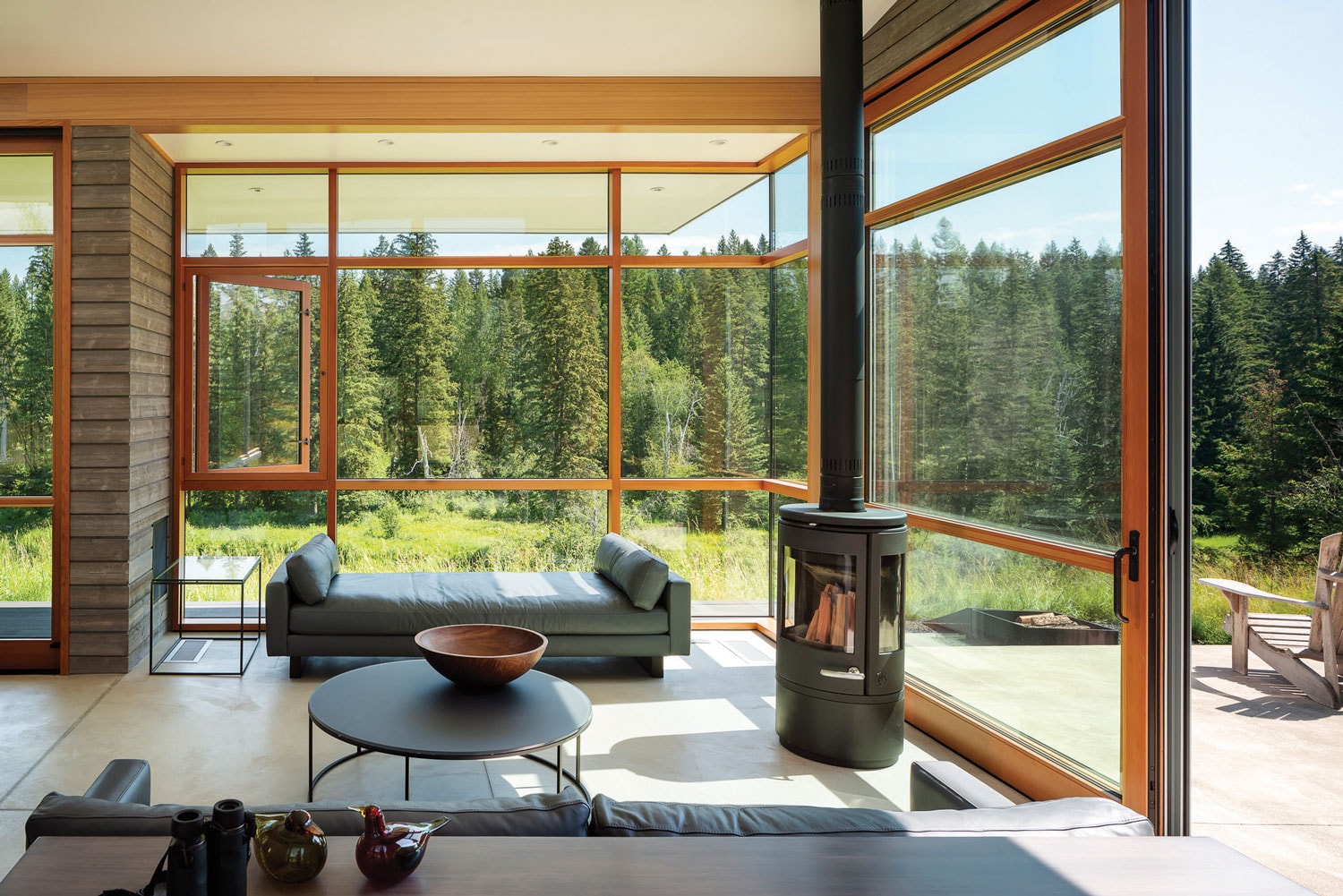 Room & Board furniture provides seating in the living room. The windows and sliding doors are made with vertical grain fir and metal from Quantum. The wood stove is the Morso 7940.

A good many of their clients come to the practice as firm believers in sustainability, the architects explain. Because of this, even though the clients have the wherewithal to build much larger houses, they tend to build only what they need.

“And a lot of times, they’ve purchased a piece of property for its beauty, for what’s special about it. So we’re sensitive to the way we engage with it in our form,” Lenchek says. 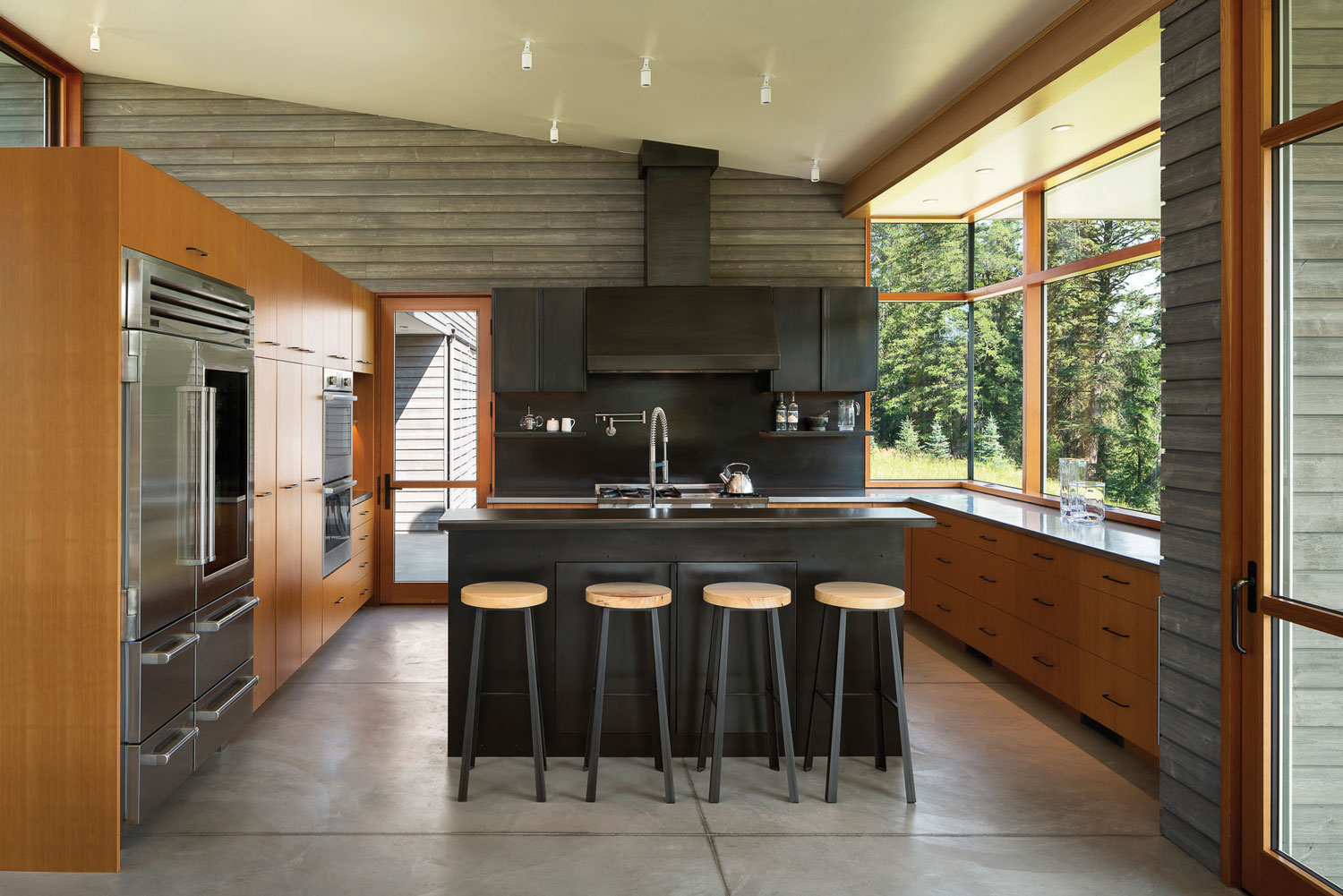 In Stillwater’s kitchen, the stainless steel countertops complement the blackened steel cabinetry, bar, backsplash, and stove hood. The rest of the cabinetry is beech wood, and the floor is concrete. The metal and salvaged wood stools are from Urban Hardwoods.

Wickline laughs, adding, “We like to call them our ‘national park-quality sites.’” 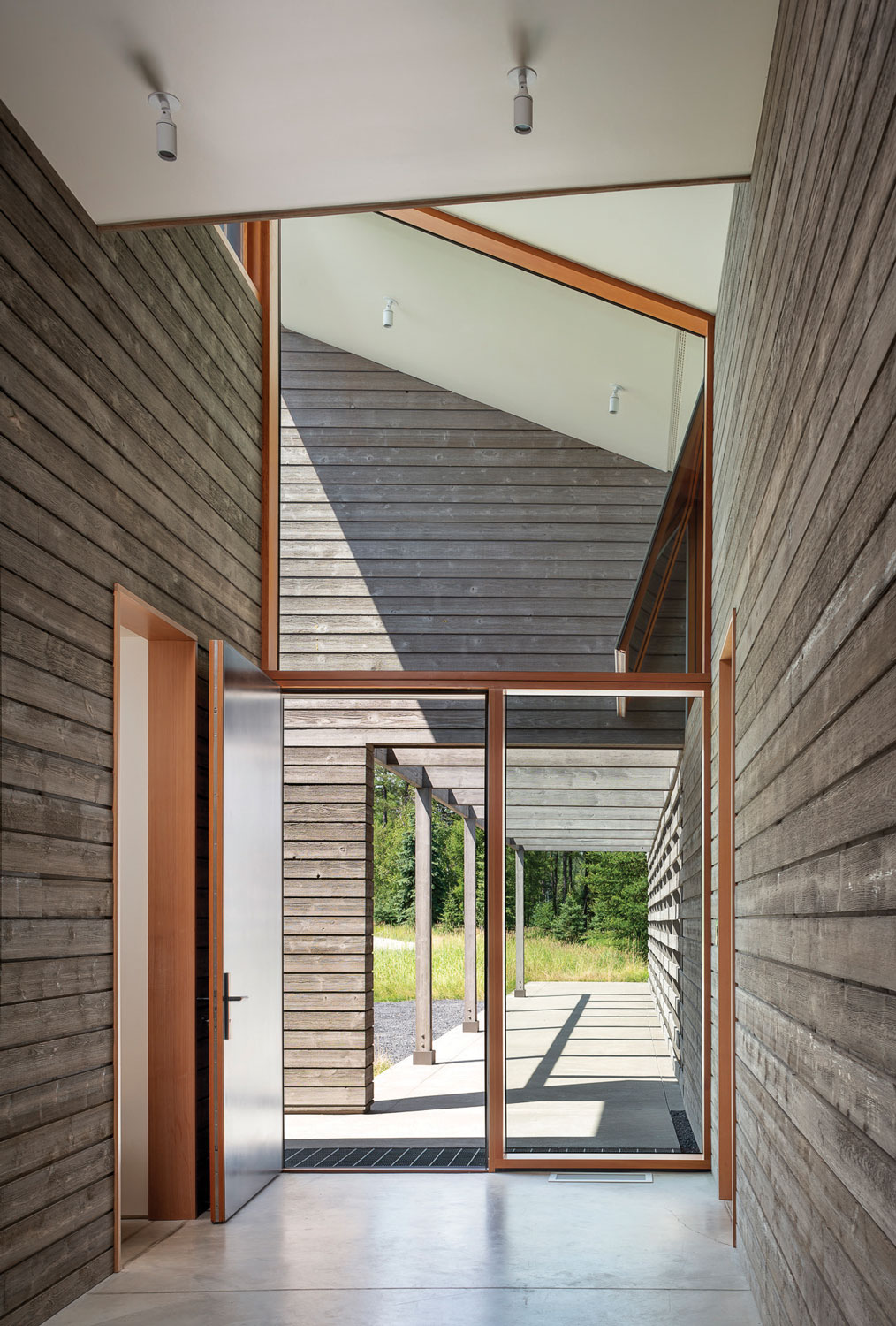 The same beetle-kill pine siding is brought into Stillwater’s interior. The lights are Hevi Lite HL-386. Photos by Andrew Pogue.

This is especially true in a case like Wolf Creek, a home on the floor of the Methow Valley with stunning forest and mountain views. The small weekend house (presently being enlarged by PBW so it can be occupied full time) is located in an area with seasonal high winds, snow in the winter, and hot, dry summers. The main views are to the west, but due to the hot summers, having too many westward-facing windows would be impractical.

The solution was to design an L-shape around a rectangular garage, which creates a courtyard that is both an entrance and outdoor living space sheltered from the wind. Both ends of the home include views and privacy from the neighbors. The house is clad in steel, each surface weathering at its own rate, and the shed roofs are bold finishing strokes. The house is built low to avoid detracting from the surrounding landscape. 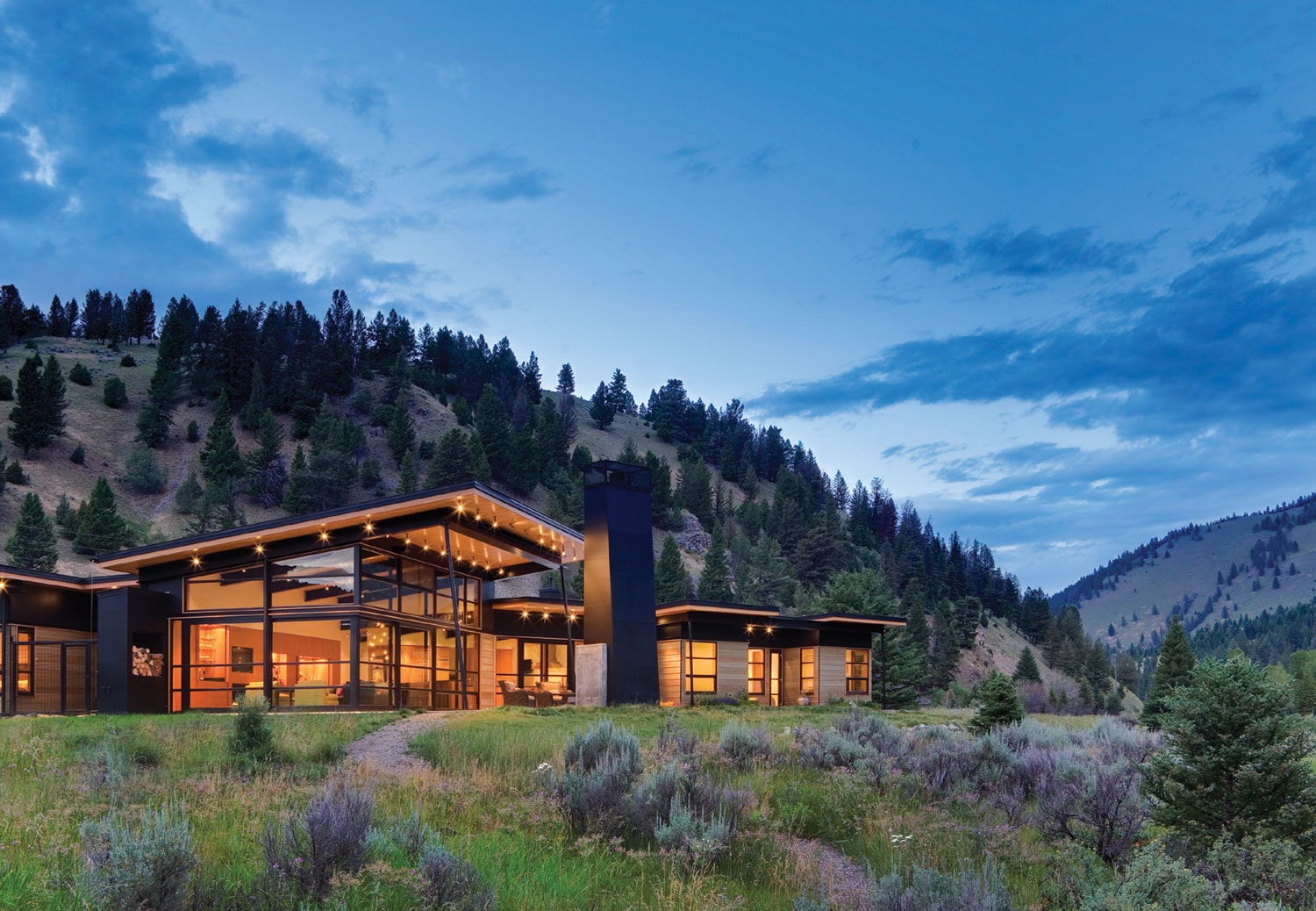 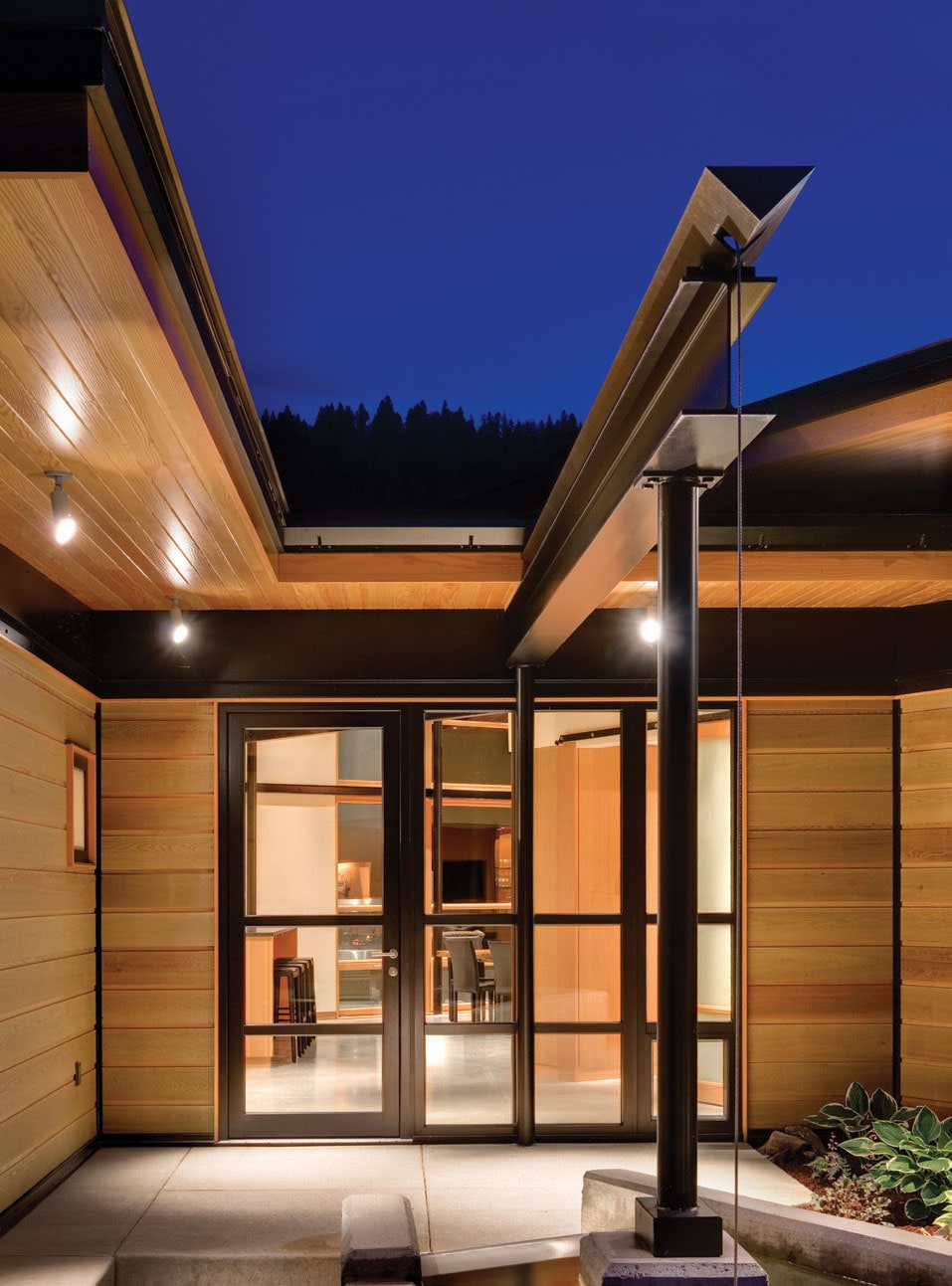 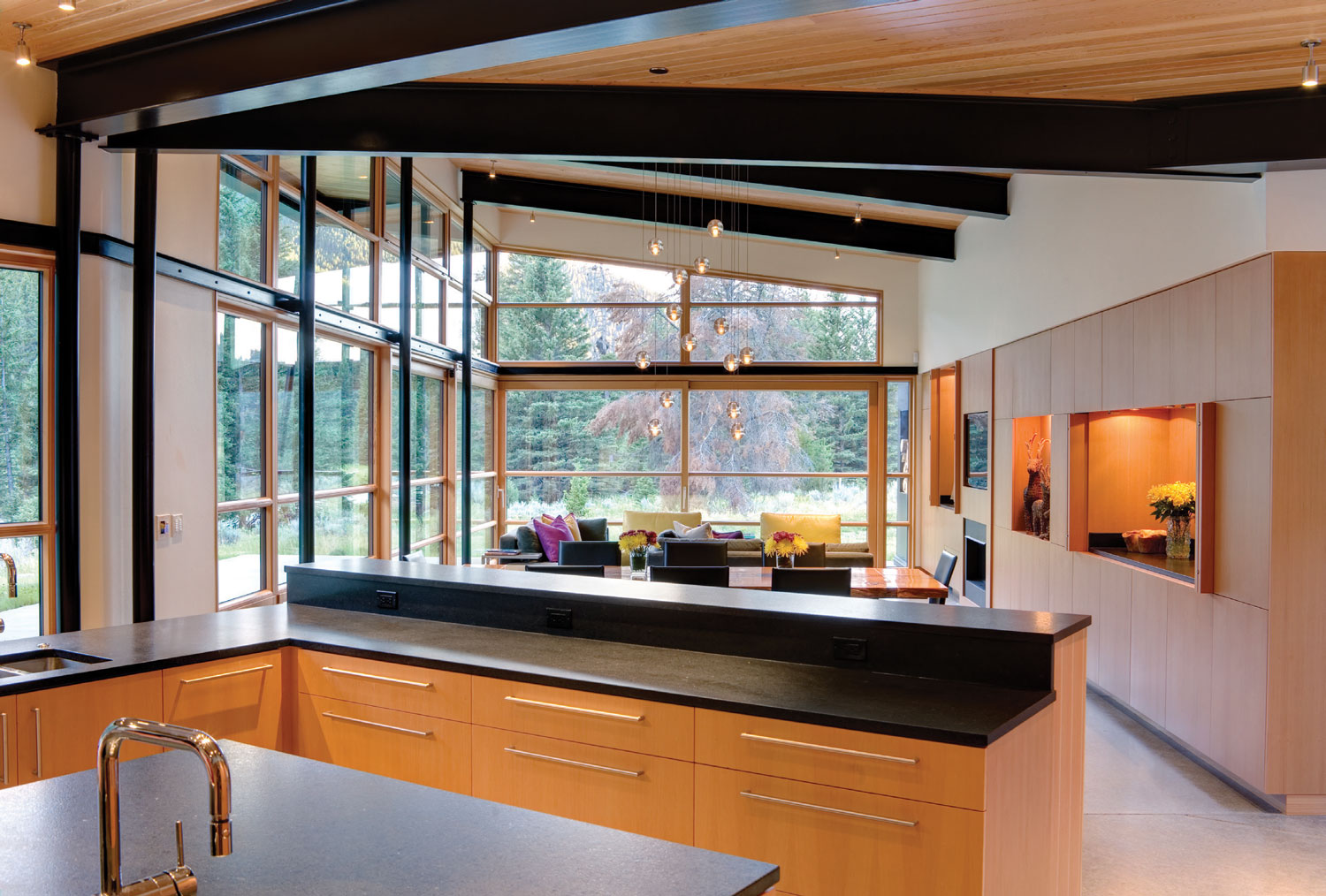 Walls and cabinets at Riverbank are made from vertical grain fir. In the kitchen, the countertop is by Paperstone with Bocci pendant lights above. The hardware is from Sugatsune, with Grohe faucets. Photos by Steve Keating

Riverbank, a relatively sizeable cedar-clad house, is set on a conservation easement beside the Gallatin River in Big Sky, Montana. Approximately 50 feet behind the house is the main road from Bozeman to Big Sky. “Here, we were between the road and the river, so it had to be a long, narrow house,” Lenchek says. “Because of Montana’s winters, we wanted it to face south to allow a lot of passive solar heat in. There are two wings at an angle to each other, and that was to pick up the views of the bend in the river. It’s only 75 feet off the Gallatin, which flows into the Missouri River. It’s one of the premier fishing areas in Montana.”

A towering chimney caps an outdoor fireplace, serving both as a sculptural focal point from the entrance of the house and as a practical measure. The shed roofs strike three different angles, with one almost flat. The effect is quite dramatic but the snow load on the roofs is significant. The location is covered in snow much of the year and, being so close to Yellowstone National Park, it’s also susceptible to earthquakes. “Those two things drove us to a steel structure. One of the tricky things is none of the exposed steel on the exterior goes into the interior, and vice versa.” The house needs no cooling system, as the area rarely gets above 80 degrees in the summer, but the concrete floors and geothermal heat pump warm the home all winter.

Wolf Creek is a cabin set in a dramatic windswept meadow in the Methow Valley with mountain views. The Corten steel roofing and siding are aging gracefully, and contrast was added with cedar siding. 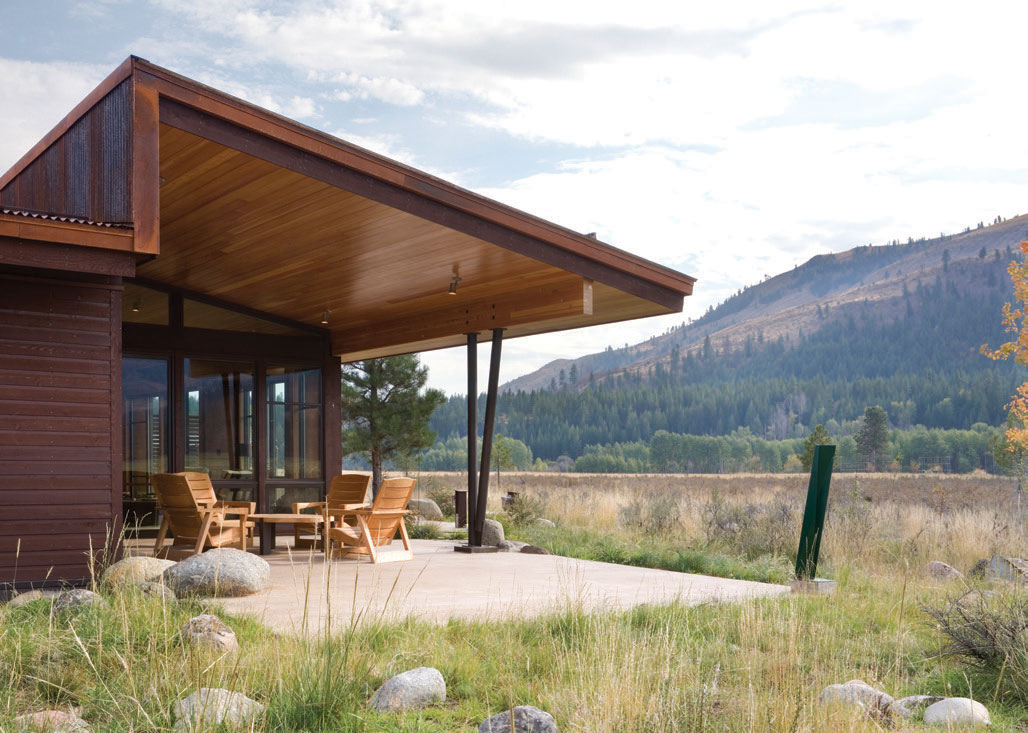 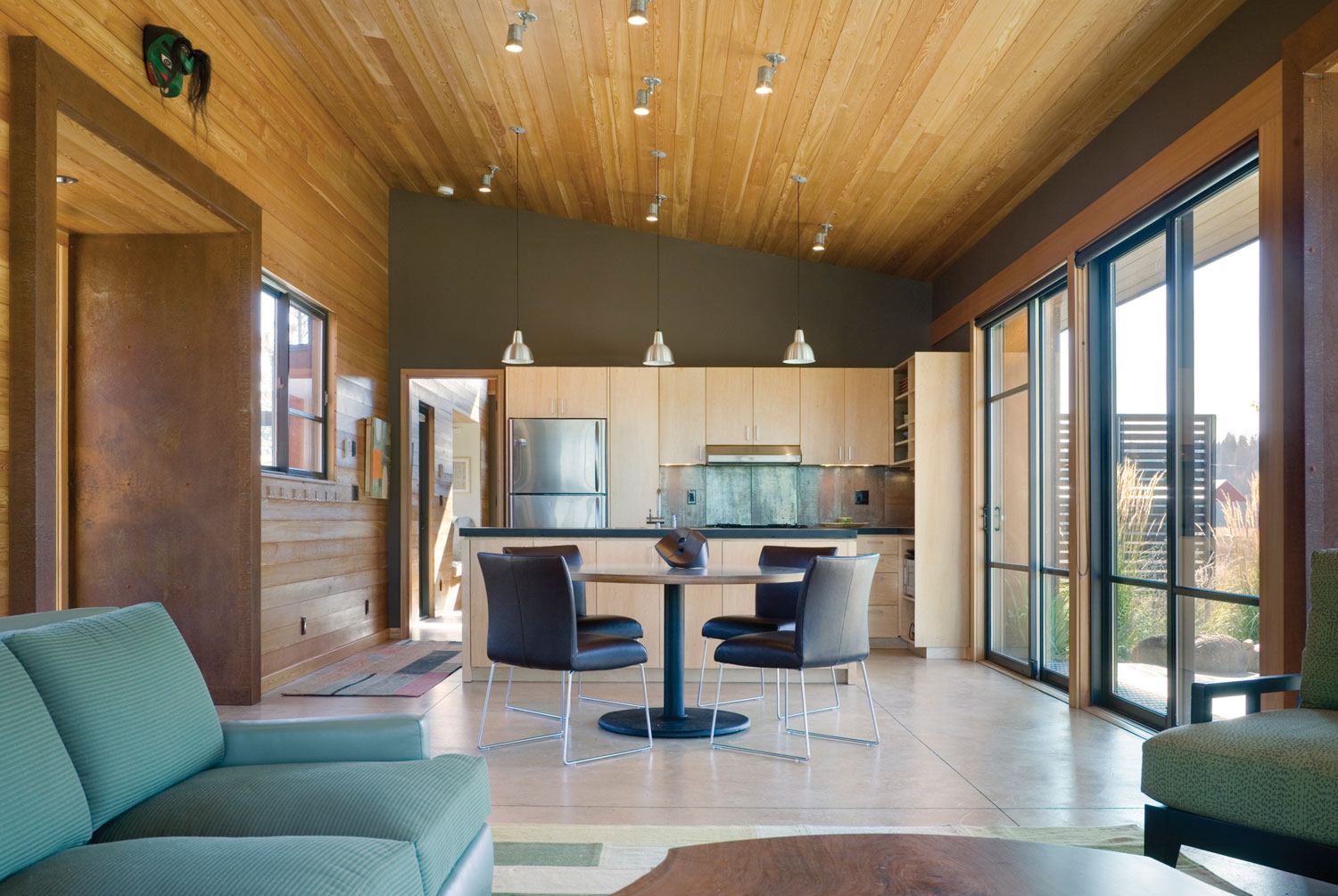 Wolf Creek’s open living space, with Corten steel panels and a concrete floor, are softened by larch wood walls and ceiling. The cabinetry is maple, and the ceiling lights are by Stonco.

Stillwater, a large house beside the Stillwater River in Whitefish, Montana, is clad in beetle-kill pine. The climate control system in the home is complex. Pumps pull water from wells for cooling, and ground-source heat pumps keep the house warm. The concrete floors are heated and cooled in this manner, and additional heat is dispersed through forced air and a filtration system. 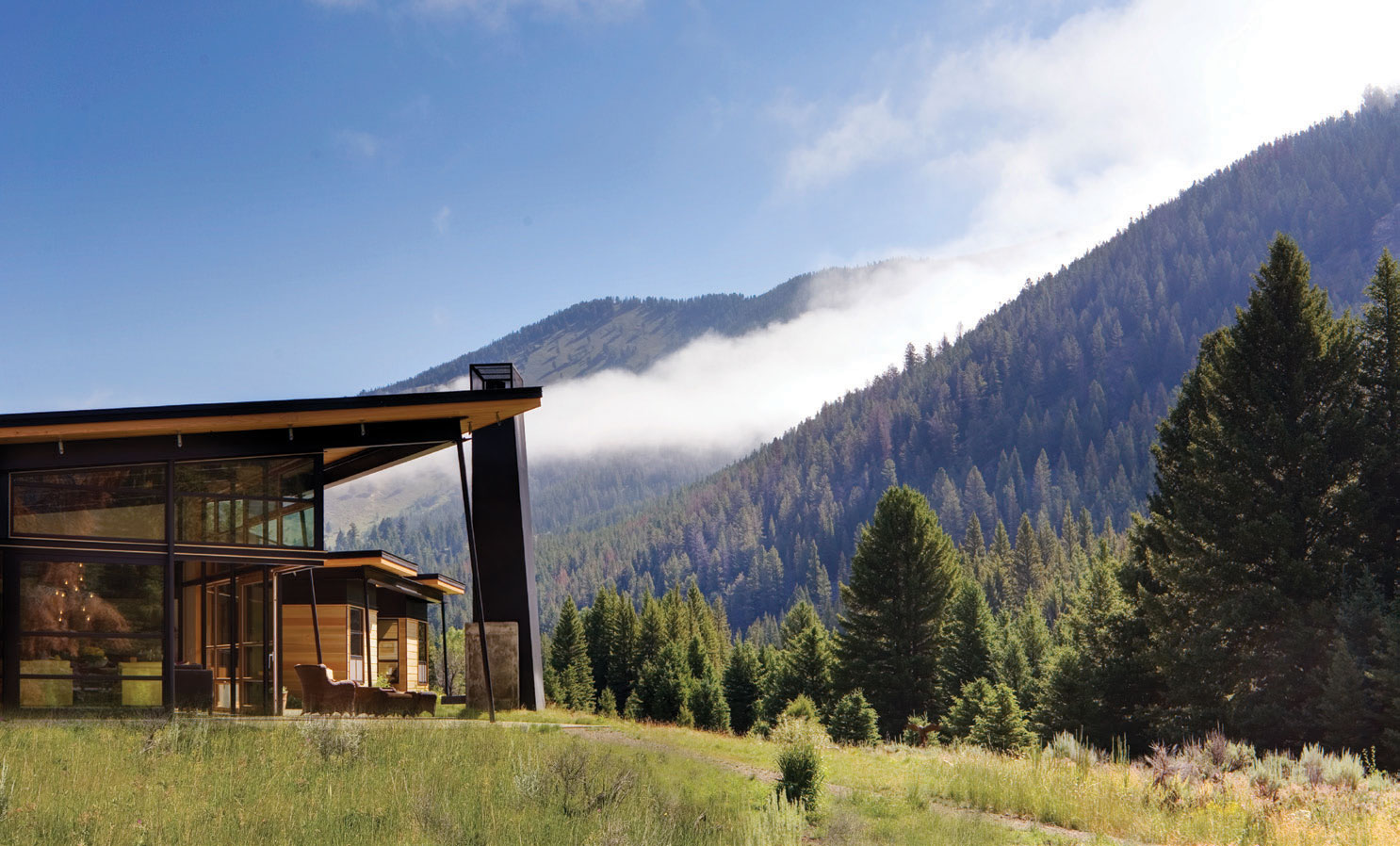 “The really interesting thing about this project,” Lenchek says, “is, as Dan says, we usually use a very light hand to insert our houses into the landscape. This was the opposite. The geo-tech engineer told us the bank between the river and the house was unstable because it was too steep. He suggested we slightly lower the angle of the slope, but we decided to significantly lower it so that you’d have a view of the river. We took all that soil to the back of the house where there was a road, and made gentle berms so the road wasn’t visible from the house.” 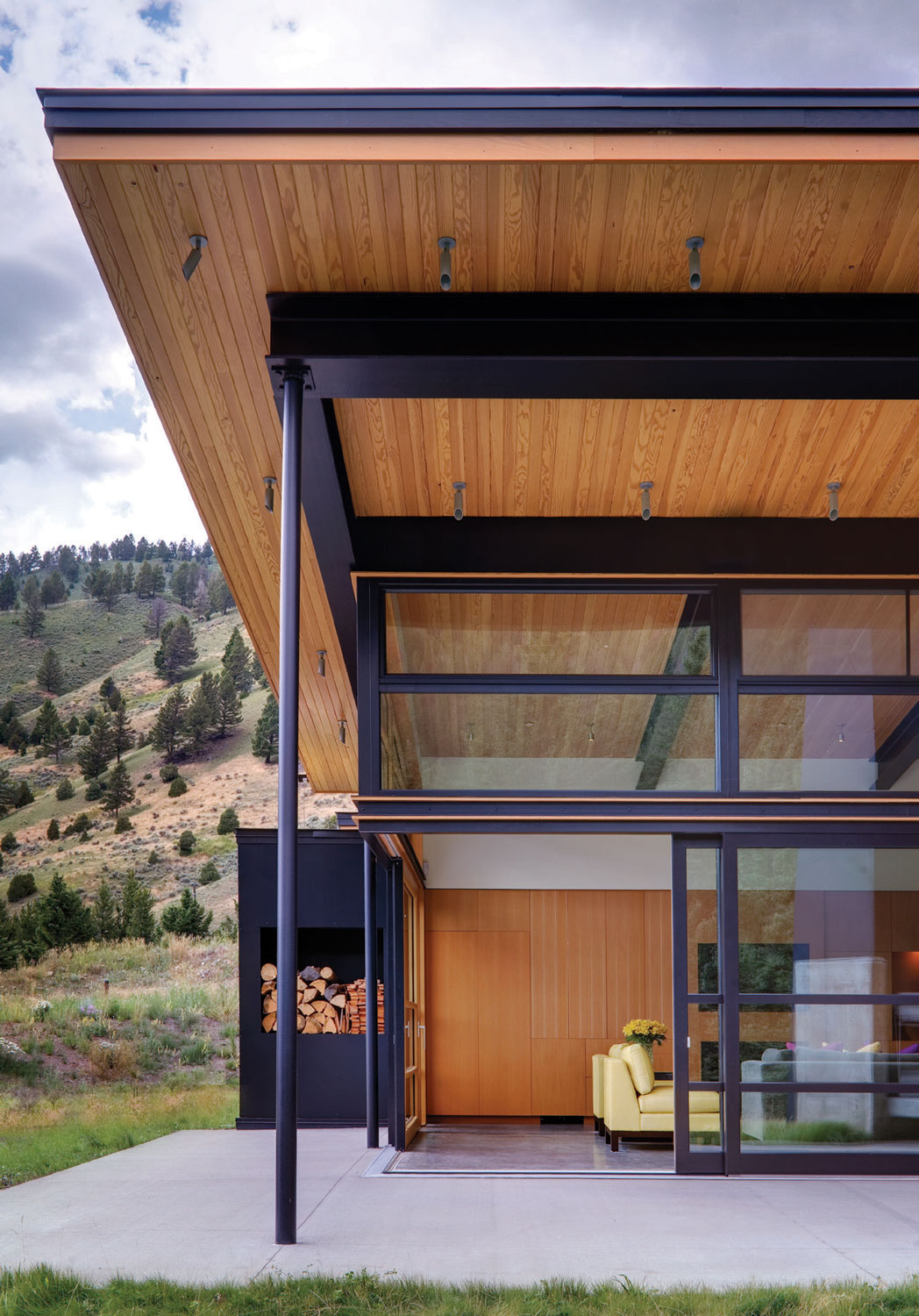 A view of the soffit outside of the orthogonal steel, wood, and concrete cabin. Photos by Steve Keating. 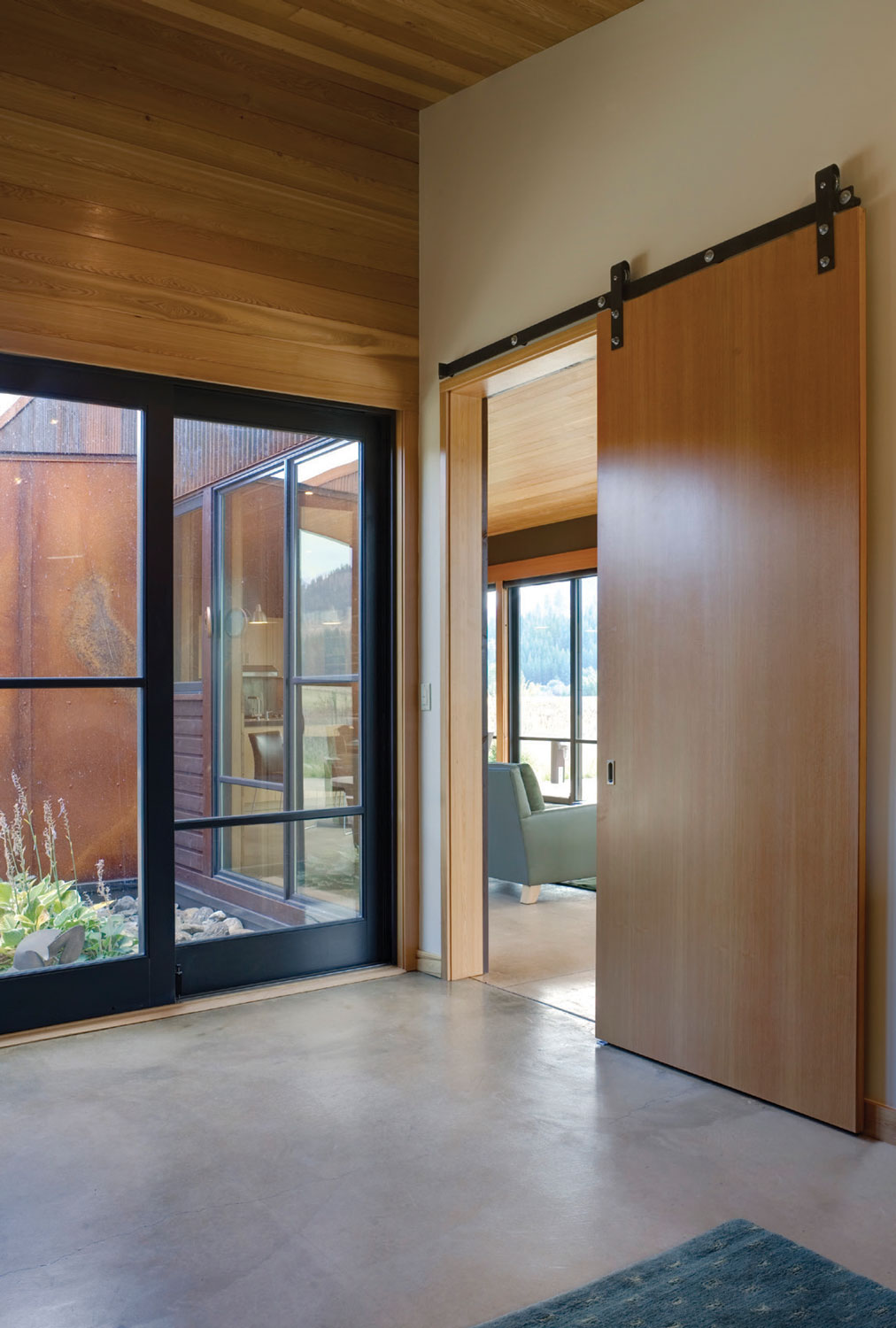 Stillwater was designed for views of the river to the north with outdoor seating, but with Montana’s cool weather, outdoor seating was created on the sunny southside as well. As a result, the floor plan is a long hallway with corridors and rooms situated to form courtyards. From inside, the views alternate between the river and mountains. With its walls of glass, the shed roofs resemble wings, as if the house were about to take off and soar above the river.

When asked what they see as the future for the firm, both Lenchek and Wickline refer to the benefits of the merger. They’d like to spread out more and are quite interested in doing more planning, pairing architecture and organization on multi-property sites. “We like identifying opportunities, finding what other people might overlook,” says Lenchek. 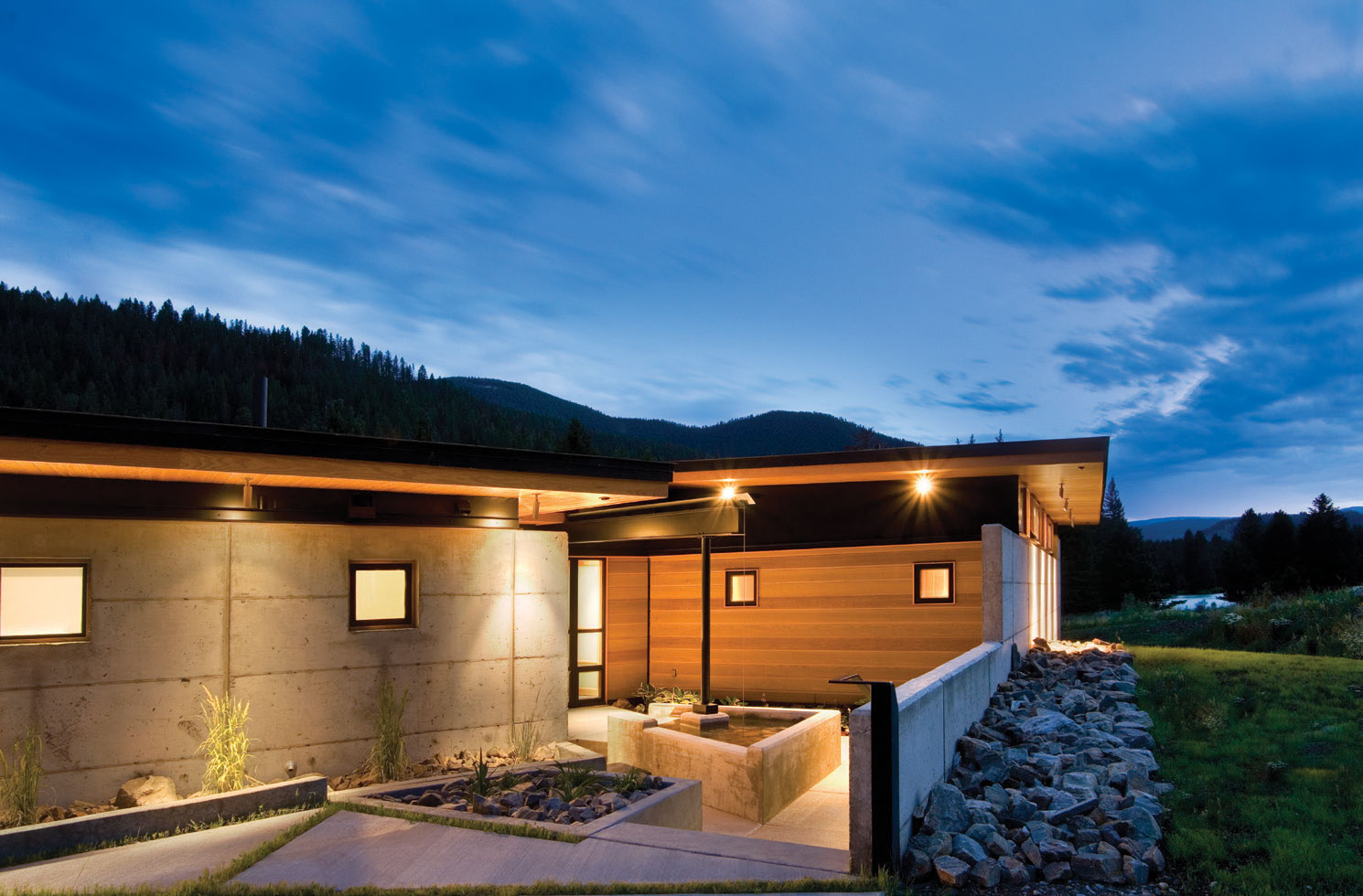 A steel gutter carries water down a cable from the roof to a fountain.