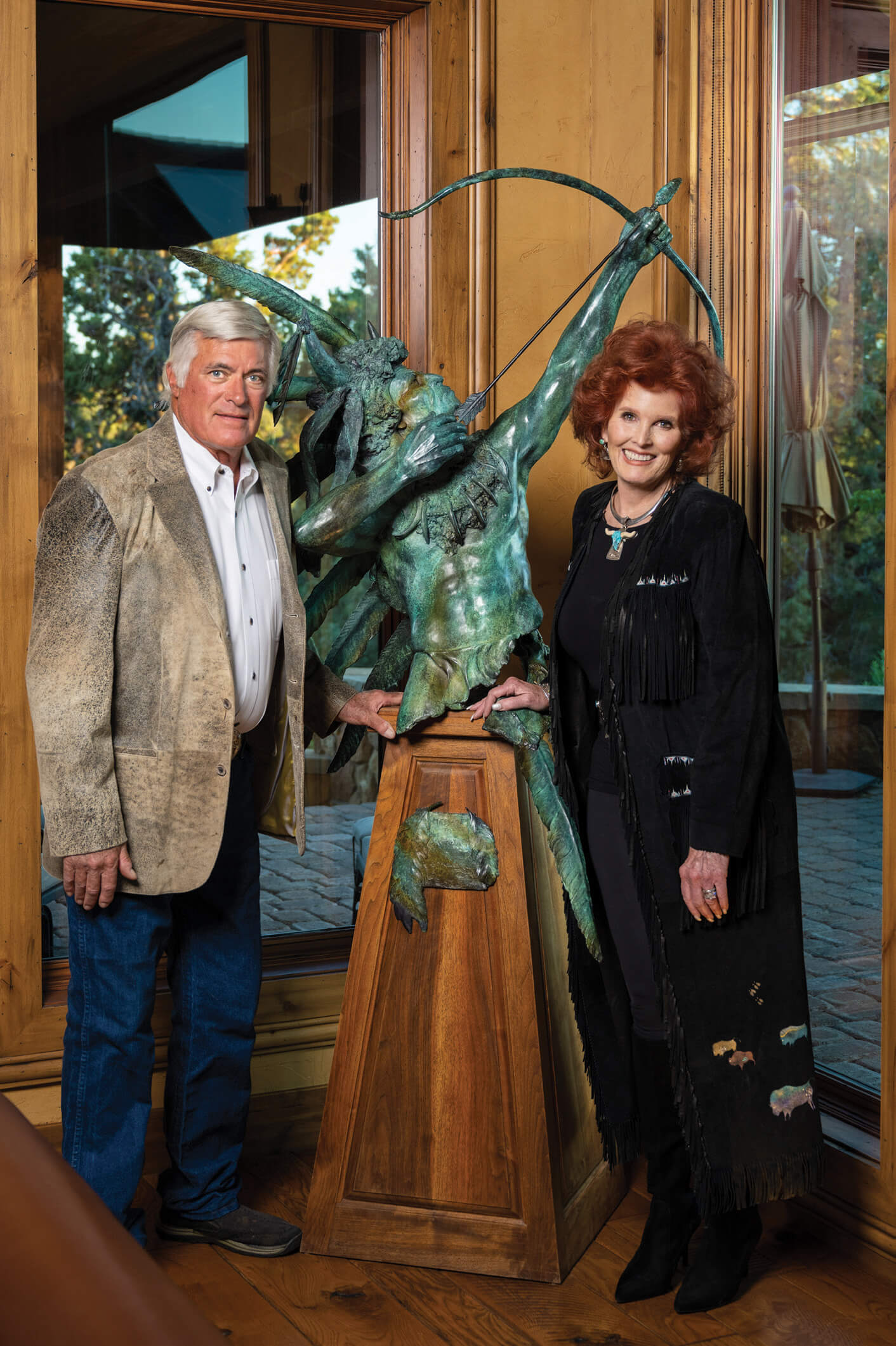 Collectors Mike Davis and Gail Hayes Davis stand next to the first piece they bought together, Jerry McKellar’s Message to Sky Father.

Art has always played a significant role in Gail Hayes Davis’s life, and she made it one of her goals to share its importance with others. Her professional journey began as an art teacher. “I taught probably most everything you could think of, from glass and jewelry to photography, painting, and sculpture,” she says. “I saw that the arts were being eliminated from the curriculum, and someone needed to keep them alive and well in our schools. So I went back and got a doctorate in educational administration and became a principal.”

Upon retiring, she became the director of Young Audiences of Oregon and SW Washington, a local chapter of the nation’s largest arts-in-education organization. She says that during her five-year tenure as director, a highlight was receiving one of the top national educational awards along with a $5 million grant to implement an Arts4Learning curriculum that taught reading and writing through the arts, and still continues in some of the school districts.

Davis’ husband, Mike, was introduced to art at an early age through classes at the Portland Art Museum. Dentistry became his vocation, but painting and sculpture remained a strong influence. “Dentistry appealed to me — there’s artistry involved,” he says. “I focused more on aesthetic dentistry and full-mouth reconstruction, restoring people to feel good about themselves and creating beautiful smiles.”

When they married 40 years ago, the couple began collecting art more seriously as a team. As a result, their ranch and home near Bend, Oregon, is filled with works that spill over into their “party barn,” and sculptures are integrated throughout the property’s landscaping.

Davis is a supporter of the C.M. Russell Museum in Great Falls, Montana, and serves on the board of directors. She also sits on the board of the High Desert Museum in Bend, in addition to volunteering with other arts organizations. And, as a life-long horse-lover, her passions include raising support for the 3 Sisters Equine Refuge.

For the C.M. Russell Museum, Davis has focused on their educational outreach and has been instrumental in elevating their primary fundraiser, The Russell Auction, to one with international recognition. She’s also mentored a number of new artists and helped them become involved with the museum.

WA&A: How did you become involved with the C.M. Russell Museum?

Gail Hayes Davis: My friend Christina Blackwell, who is on the board, invited me to the auction at the museum. She and I had worked on boards together in Portland. I focused on events, and we were pretty successful. I think Christina’s ulterior motive to get us involved with The Russell was that she wanted to bring the auction up from a small town fundraiser to what it is now — a world-class auction.

WA&A: How important is the auction to the C.M. Russell Museum and the artists?

G.H.D.: Once you’re juried into The Russell Auction, it’s a huge deal. The auction itself has grown in revenue from thousands of dollars to millions. It’s the primary source of income for the museum. As for the artists, it’s launched the careers of many, including Jeremy Winborg, Michael Blessing, Andy Thomas, Nancy Dunlap Cawdry, Carol Hagan, Greg Kelsey, and Brenna Tyler, just to name a few. One of the ideas Christina and I had was to search out new talent by visiting art galleries in other states and by attending other auctions.

WA&A: What did you begin collecting?

G.H.D.: Individually, we’ve always collected art. After we got married, we had a home in Portland that was modern/contemporary, and we primarily collected glass. In 2008 we built a large, lodge-style home in Tumalo, near Bend. Our décor changed drastically, and at the same time, I was introduced to Western art at the C.M. Russell Museum. It fit the house that we were building, so we went from the glass genre to Western art, and we began to purchase in earnest.

WA&A: What’s most important to you when choosing a work of art?

G.H.D.: We buy art not as an investment but because we love the work — to hold onto and enjoy! Now, our collection is primarily composed of Western oil paintings and bronze sculptures by living artists that showcase the beauty of the Western lifestyle. Mike loves the light of Brett Cotton’s river scenes. The Wolf Queen by Joe Kronenberg begs the viewer to touch the wolf’s hair and look into her transparent eyes. The mountain details in Paul Dykman’s landscapes; the brilliant colors in Tom Gilleon’s tipis and Colt Idol’s landscapes; and bronze sculptures by Greg Kelsey and Jerry McKellar — all of these speak to us.

We also love the stories behind each piece of art, especially the Russell Skull Society artists who mirror what we admire about Charlie Russell. Charlie valued friendship, had a great sense of humor, and was a storyteller. He fought against racism, sexism, and championed the environment way before his time.

WA&A: If your house were on fire, what would be the first piece you’d take with you?

G.H.D.: The first piece we bought together: a life-sized, bronze sculpture Message to Sky Father by Jerry McKellar. But it would be too heavy!

G.H.D.: In 2008, during the first auction I’d gone to at the Russell, I fell in love with this huge, long sculpture — as long as our dining room table. It depicted horses being herded through water. I was just really attracted to this piece. And there’s somebody in the front row, across the way, bidding against me. The bidding got up to my credit card limit, and I thought, ‘Maybe I should check out who’s bidding against me.’ I looked, and it was John Elway, the quarterback. I nodded to him and figured, ‘I’ll let him get it; he can afford anything he wants. All I’m doing is raising the price.’ When I got home, I commissioned a local artist in Oregon to do a different sculpture but the same length — I have it on my dining room table still. It’s appropriately named Swept Away.