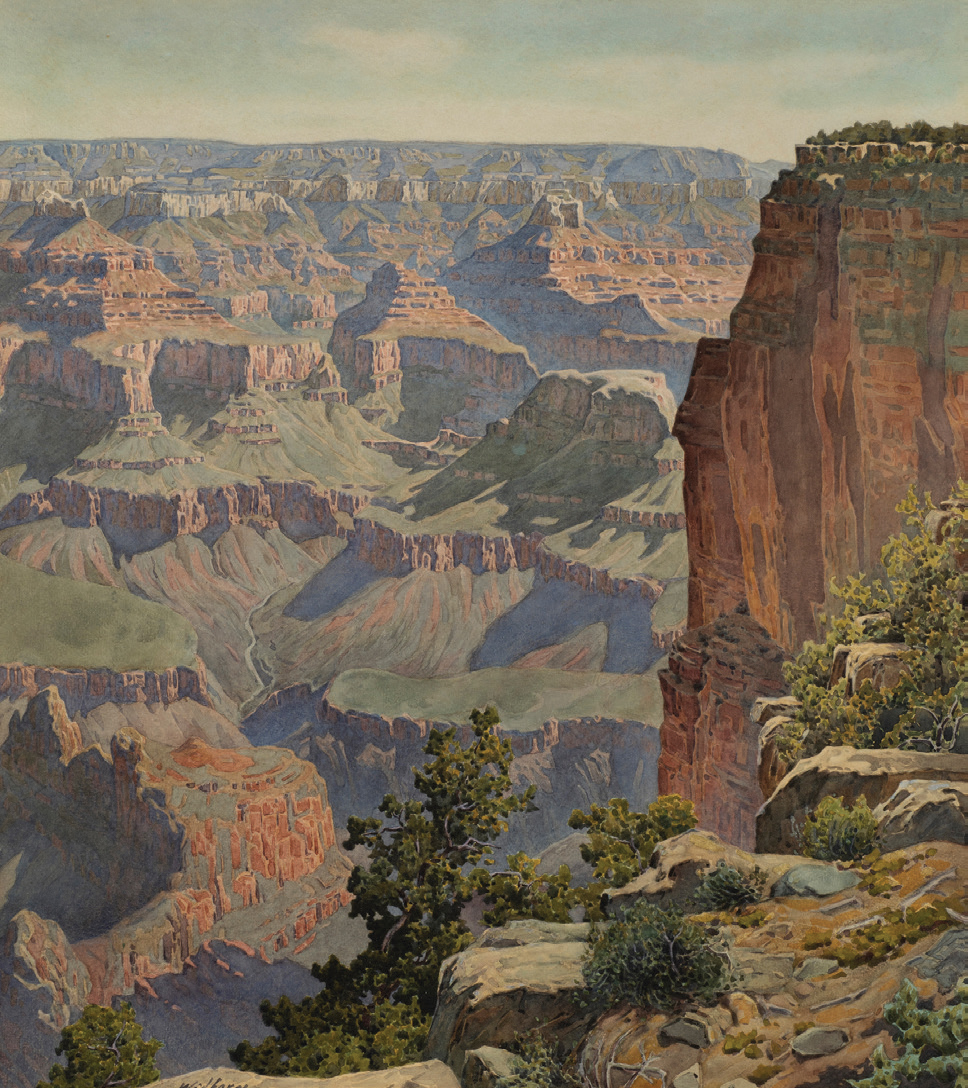 Gunnar Widforss’s portrayals of the Grand Canyon are second to none. He was meticulous in his technique and brilliant with his compositions. This view of the Grand Canyon from Hopi Point is one of his many great masterpieces. And the fact that this image includes the Colorado River, which was not always the case, adds to the painting’s importance.

Widforss was born in Stockholm, Sweden, on October 21, 1879, the third of 13 children. After completing his artistic studies, he traveled throughout Europe and North Africa and first visited the U.S. in 1906. Early on, he received wide acclaim in Europe and, among other honors, had several of his paintings purchased by the king of Sweden.

In 1921, while making his way across the U.S. en route to Japan, he fell in love with the American West and never left. His friend Stephen Mather, the founding director of the National Park Service, encouraged Widforss to focus on the national parks, and the artist subsequently painted watercolors of Zion, Bryce, Mesa Verde, Crater Lake, Carlsbad Caverns, Sequoia, Death Valley, Yellowstone, and the Grand Canyon. (Many of his large Yosemite paintings hang in the Ahwahnee Hotel in Yosemite National Park today.)

But the Grand Canyon captivated him most of all. Widforss first arrived there in early 1923, and he lived at the South Rim until his death at age 55 in 1934. His artworks were displayed at the El Tovar Hotel and were sold to visitors from around the world for $75 to $400.

The Taos Society artists were said to have regarded him as one of America’s greatest living painters, except for his style to “paint nature so closely.” Clearly, that was no problem for William Henry Holmes, director of the National Gallery of Art, who gave Widforss a solo exhibition of 72 works in December 1924. Holmes praised the paintings, saying, “They give a more satisfactory understanding of the Grand Canyon than any that have hitherto been attempted. It is well nigh impossible to convey the immensity and grandeur of these marvels of nature, but Widforss has accomplished it.”

Widforss’s preciseness and sensitivity, combined with the spectacular grandeur and atmosphere that permeates the Grand Canyon, make these works among the most desirable landscapes of the American West. Almost 100 years since his passing, Widforss remains one of the greatest artists to have ever painted one of America’s greatest treasures.