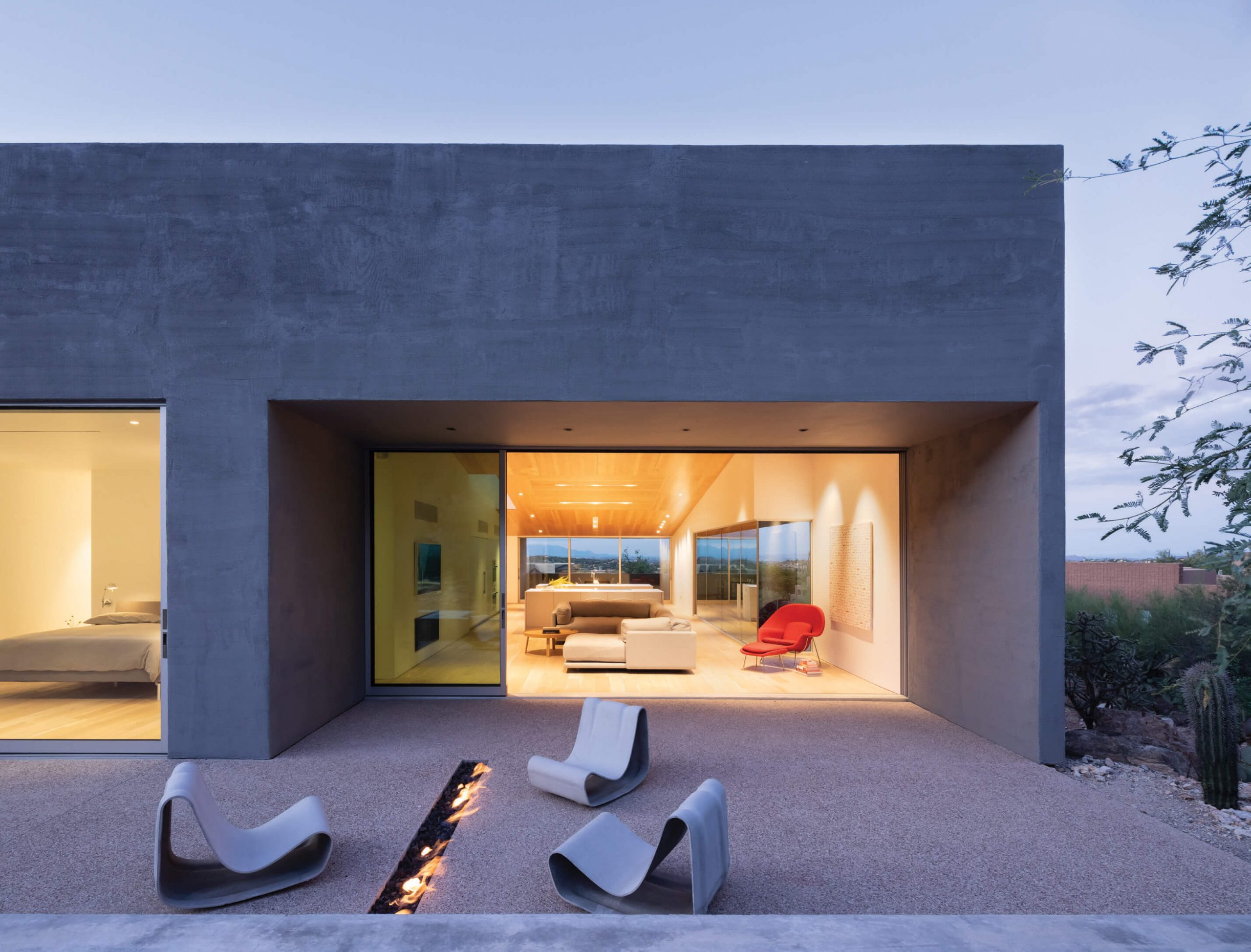 The Ventana House creates a feeling of being at one with the mountain. The Willy Guhl Loop Chairs around the fire were designed in 1954. The sliding glass doors are from Western Window Systems. Photographed by Ema Peter.

The theme of confluence resonates throughout any conversation with Kathy Hancox and Michael Kothke, founders of the Tucson, Arizona-based HK Associates. Everything — from their education, to past work experiences, to the people they’ve encountered along the way — has come together in their vision. 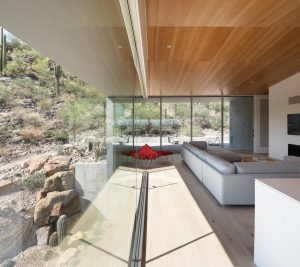 First, it’s important to know that HK Associates is a firm of two. As they point out, their hands-on immersion in every facet of their architectural practice — from answering the phones to the finished project — is exactly what they want. They have a trusted circle of engineers, artisans, and construction companies with whom they regularly work, but otherwise, they’re alone. “Managing people is not my passion,” explains Hancox. “Designing is what I love.” 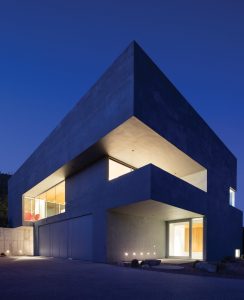 Ventana House’s two stories rise from a rugged site in Tucson, Arizona, providing views that a typical single-story home could not. Photographed by Ema Peter.

Hancox and Kothke met as first-year students at Canada’s University of Manitoba architecture program, where they received what they describe as a true Bauhaus education. One of their professors had worked with Le Corbusier, and their first year was devoted to art, color theory, photography, and other pillars of modern design. 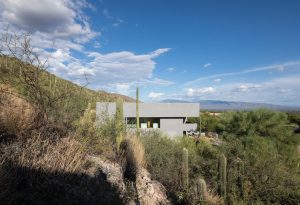 From the east, the house subtly blends with the Catalina Mountains. Photographed by Ema Peter.

They chose the well-respected master’s program at Nova Scotia’s Dalhousie University, in large part for the opportunity to study with Brian MacKay-Lyons, who is celebrated for championing Nova Scotia’s vernacular, down to the use of local materials and traditional construction methods, and for creating elegantly economical modern houses. 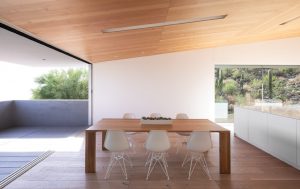 Sliding doors from Western Windows Systems open the dining room to the south terrace. The table is Radii by Bensen, and the chairs are classic Eames. Photographed by Ema Peter.

“Brian was thinking about how architecture could be more humanistic, connected more to the everyday, just more influenced by vernacular and tradition. [His work is] very connected to place and very modern. I think our education was a fusion of these things,” says Kothke. “So we got the more traditional Bauhaus abstraction thing; then we moved on to see first-hand this place-based experiential mix of Modernism and Humanism in the vernacular.” 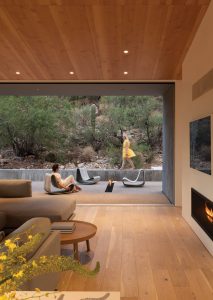 Viewed from the kitchen island, the sloped alder ceiling over the living space echoes the rise of the mountainside, complemented by the warm white oak floor. Photographed by Ema Peter

Over the next 10 years, Hancox and Kothke were at different firms, meeting and working with some of their heroes, including Peter Cardew and John Patkau. The couple was in San Francisco when MacKay-Lyons popped back into their lives, suggesting that they move to Tucson and work together for Studio Rick Joy. 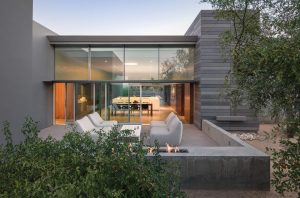 Canyon House’s orthogonal concrete exterior is transformed by sculptural öko skin slats from Rieder Group. The Maya chairs are from Room & Board, and the Aegean Aluminum coffee table is from RH Modern. Photographed by Bill Timmerman.

It was after leaving Rick Joy in 2005 that Hancox and Kothke opened their own firm. They had fallen for Tucson’s abundant desert landscape and found a welcoming and stimulating community of architects and artists to join.

“I would say that everyone we’ve ever worked with, we’ve learned from the experience,” says Hancox. “When we moved to Tucson, we’d already been practicing architecture for many years. We had our own perspective and point of view, and coming here expanded it. I think what we’re doing is a merging or expanding of everything that we’ve learned before.” 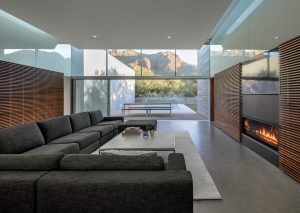 The intent of Canyon House’s design was to allow the clients to live not just with the view but in it. Floor-to-ceiling glass walls at either end of the canyon-like living space offer stunning vistas, while reflections from back-painted clerestory-style windows create an ambiguous feeling of the outdoors wrapping around the homeowners. Photographed by Bill Timmerman.

“One of the really powerful influences of Rick’s work on us, one of the reasons it resonated so strongly,” Kothke adds, “is that he is able to make the conceptual very accessible. So there’s something really tangible in his work that laypeople can just get. [They] walk in and go, ‘Wow. This is cool.’ The first part of our education was more intellectual, so that was really interesting.” 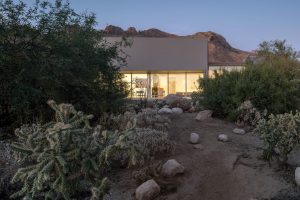 The house is equal parts landform, living quarters, and also a mechanism that blurs the line between interior and exterior, all while protecting the occupants from Tucson’s often harsh climate. Photographed by Bill Timmerman.

The fledgling firm began designing houses that won numerous awards, including the 2019 AIA Young Architect Award, the AIA Southern Arizona Home of the Year, and the 2019 AIA Arizona Interior Architecture Citation Award. Their designs fit seamlessly into their surroundings and are at once sleekly modern and represent traditional desert architecture, sheltering their inhabitants from the often harsh climate and creating a rich interior life.

“One of the things that we love most about being here,” says Hancox, “[is that] we’re very interested in the ephemeral, the changing shadows throughout the course of the day, and reflections. We work with a lot of glass and use mirrors to bring the landscape in, so you really are living in a kind of heightened sense of the site.” 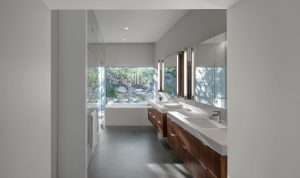 In the homeowner’s bathroom, the windows and glass partitions erase the sense of indoor-outdoor divisions. The freestanding tub, counters, and sinks are from WetStyle, the walnut vanities are custom, and the floor is concrete. Photographed by Bill Timmerman.

They don’t regard sustainability as a separate consideration; it’s completely one with good design, and they’re excited by material advancements that allow for more democratic use. Kothke has long taught at the University of Arizona College of Architecture, where he regards himself as learning alongside his students. “I believe strongly that you can teach creativity,” he emphasizes. “You can teach design. There’s not a limited number of people who can do this.”

Barrio House, in Tucson’s historic center, was the kind of challenge both architects relish. The structure had to fit into a tight 2,000-square-foot space that was governed by strict regulations. Hancox, a lifelong puzzle-solver (as a child, she enjoyed taking things apart and putting them back together), takes pride in how the layout’s flow creates the sense of a much larger interior. The homeowners had hoped for a roof deck, but regulations wouldn’t allow it, so Hancox and Kothke created a rooftop periscope. One long, sloped rooftop mirror reflects the opposing length, creating the completely believable illusion of a window peering into the distant Santa Catalina mountains. 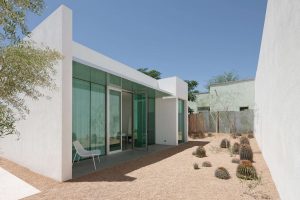 Modern as it is, the home Barrio Historico pays homage to the area’s design traditions. Here, the homeowner’s bedroom opens to a courtyard. Photographed by Bill Timmerman.

The two credit their use of reflections to photography classes they took at the University of Manitoba and to their friendship with the late Dick Williams, an influential architect who lived to the age of 101. Williams had a periscope in his Tucson house. And, in the spirit of confluence, Williams was also the one who’d first brought two of their Manitoba architecture professors to North America.

“These tendencies, they stick with you,” says Kothke. “It’s one of the things that makes us most excited about what we do when you have these affinities to things; it’s doing work that allows things to grow and flower. That’s part of the creative process — that we’re taking something forward. You’ll pick up on these things from your subconscious over decades.” 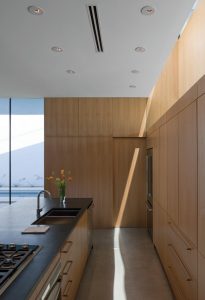 Light from the periscope above glances across the rift white oak cabinets, soapstone countertops, and concrete floor of the kitchen. Photographed by Bill Timmerman.

At Canyon House, they again used reflective surfaces to expand the space. It’s a unique riff on the periscope concept, enhancing the views the clients desired. 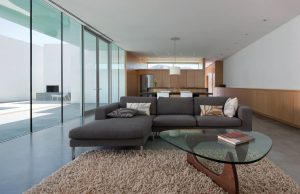 In the living room, the periscope creates the illusion of a window that looks into the distant mountains. The sectional sofa is Neo from Bensen, and the coffee table is by Noguchi. Photographed by Bill Timmerman.

“Our mission was to design a home where they could not just live with the views, but in the views,” says Kothke. “The living space is a kind of canyon between the two wings of the home. The windows rise up 7 feet, and then there are 5 feet of what appears like a clerestory window but is actually back-painted glass that becomes a reflective surface — not only pointing the living space to this view, but the view is wrapped around you by the reflection. It’s analogous to the cycloramas of the 18th century, like painting in the round.”

Another project, titled Ventana House, is on an odd pie-shaped lot that was subdivided from a larger one. The architects sought to highlight the views again, but from the ground, only other houses were visible. Then they climbed a mesquite tree and realized the house had to be two stories, which was rare for Tucson. The open living spaces and master bedroom are on the second floor, taking advantage of the spectacular views they’d discovered from the treetop. 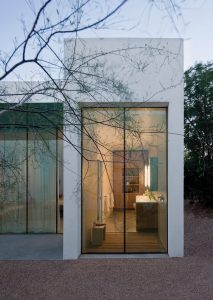 “We have a very holistic design point of view,” Hancox says. “For us to really heighten the experience of a site, we also have our hands in the interiors and the landscaping. We like to design everything for the full immersion experience, so we love to pick the furniture. We design very modern architecture, but we’re always trying to make spaces comfortable and warm so that people want to spend time in them. We think all of the landscape is critical. We always try to do the least amount of disturbance on a site to maintain the natural beauty and make it look as if the building has always been there, emerging out of the desert.” 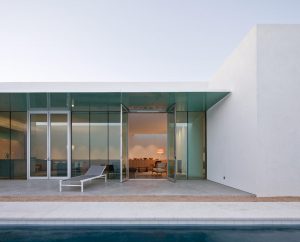 The view across the pool and into the house is a play on reflections, capturing both the intimacy of the courtyard and the ever-changing Sonoran skies. Photographed by Bill Timmerman.

The two architects sometimes disagree on smaller aspects of a design, but never on the essence. After so many years together, they arrive at the same place in the end.

“I think our projects are very personal,” says Hancox. “We always try to reflect the client. Of course, we’re designing through our own filters, our own point of view, but we really try to capture the personalities of our clients. We don’t have a signature style — every client is different, every site is different, and that’s our main starting point, along with, of course, the views. The views are always at the forefront of the design.” 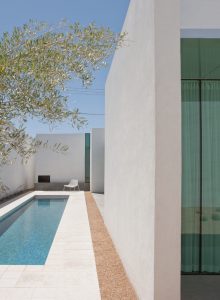 The lap pool and courtyard look toward the fireplace in the distance. Photographed by Bill Timmerman.

They can see their firm inevitably expanding a bit in the future, and they’d love to stretch their muscles in different climates, exploring other materials and vernaculars. But right now, they’re enjoying the freedom to explore and design each project completely.