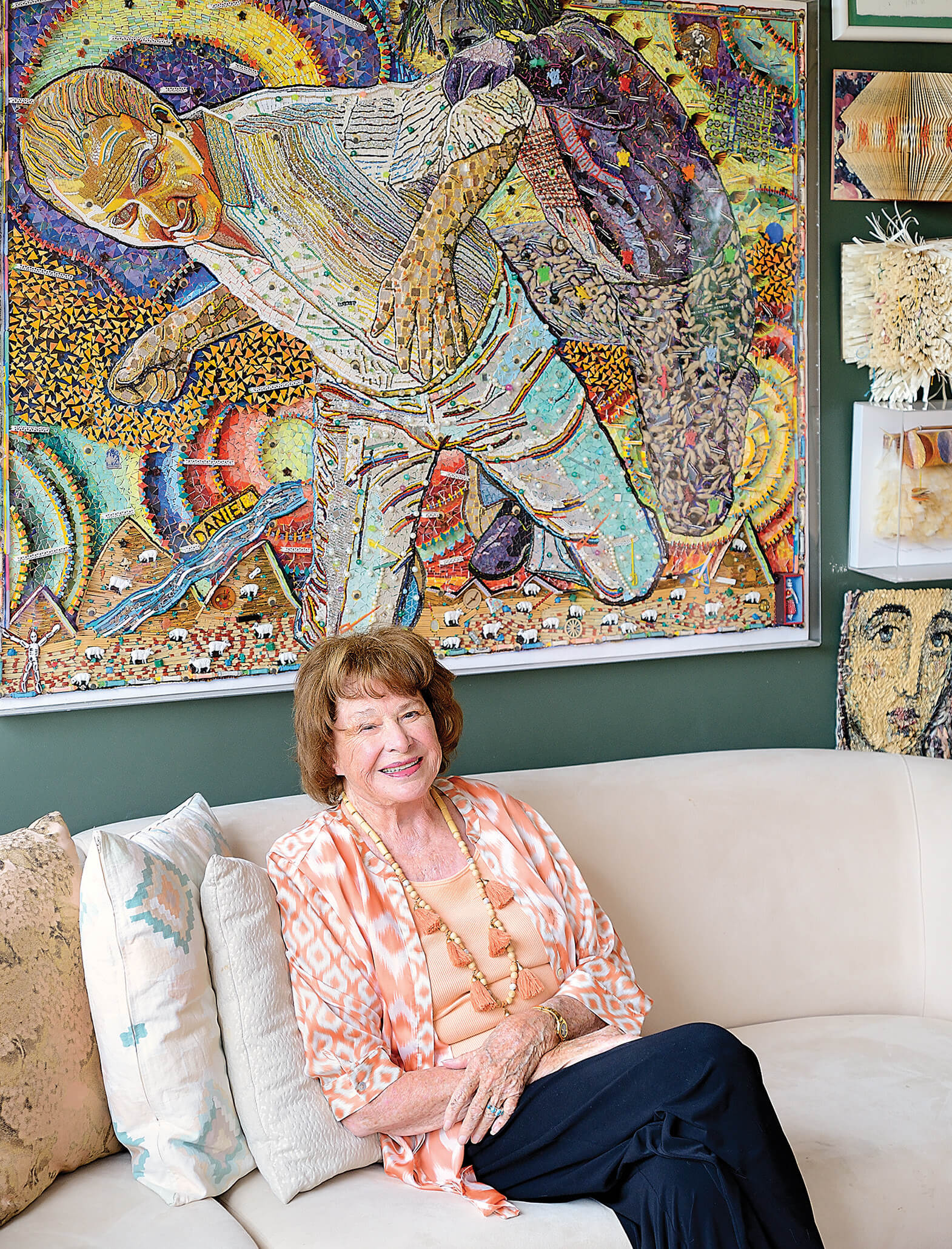 Collector Edwina Hawley Milner has been involved with the arts in Santa Fe since 1990. She and her late husband, Charles Milner, were lead donors for Milner Plaza on Santa Fe’s Museum Hill.

Edwina Hawley Milner’s life is a story that’s come full circle, from artist to philanthropist and, at age 84, a practicing artist once more. Milner was born in Oklahoma and was to be named for her grandfather Edwin when Milner’s parents thought their baby would be a boy. The young couple was surprised when a baby girl was born, but they quickly adapted, adding an “a” to the end of the name, and thus, Edwina began her life.

Milner was born during the Great Depression and her father could only find work as a driller in the oil fields. “We moved from oil well to oil well,” she says of her hardscrabble upbringing in Texas and New Mexico. “I got a terrible education or, perhaps, a good one. I didn’t have one art class except for a music appreciation class.” However, art came naturally to Milner. Her Chickasaw father’s family would bring their art projects to reunions, and her mother was “quite good in art, having taken a lot of classes.”

The San Angelo superintendent of schools obtained a grant to support Milner’s artistic talents, and she earned a Bachelor of Fine Arts from the University of Texas at Austin. While pursuing her degree, she drew fashion illustrations for a department store.

Her husband, Charles Milner [1930–2022], also attended the University of Texas, earning a degree in petroleum engineering. The couple moved to Houston for his job after college. There, she painted portraits, landscapes, and flowers, showing her work in three different galleries and exhibiting in museum shows.

In the 1980s, Milner became involved with the Texas State Committee for the National Museum of Women in the Arts, raising funds to help establish the museum. It opened its doors in the spring of 1987 in an elegant Renaissance Revival Masonic temple in Washington, D.C.

After retiring in 1990, the couple moved to Lake Austin, Texas, and then to Santa Fe, New Mexico, where Milner founded the New Mexico State Committee for the National Museum of Women in the Arts. “By this time, I’d realized how hard it was for women artists to get into a gallery, much less have their work accepted into a museum collection,” Milner says. “When they would get into a gallery, their work would be priced lower than that of their male counterparts.”

Milner’s career as an artist was put on hold for a time as she devoted her activities to helping artists and serving the Santa Fe community. “At one time, I was on eight different boards,” she says, “including the Museum of New Mexico, the International Folk Art Market, and the Georgia O’Keeffe Museum.” She was honored with the New Mexico Governor’s Award for Excellence in the Arts and the Governor’s Award for Outstanding Women in New Mexico.

Her husband was also deeply involved with the arts. Charles served on the boards of the Wheelwright Museum, the Museum of New Mexico Foundation, and the advisory board of the National Museum of Women in the Arts. Together the Milners were the lead donors for Milner Plaza on Museum Hill in Santa Fe, which connects four museums, a botanical garden, and a restaurant.

In recent years, the couple’s philanthropy has been drawn to Western New Mexico University (WNMU) in Silver City, supporting women in the arts programming. They funded an ongoing lecture series featuring prominent women artists who also hold workshops for university students. “My interaction with Edwina and Charles began 10 years ago when they provided funding for our women in the arts program. It’s an important program, as Silver City doesn’t have strong examples of such positive role models,” says Dr. Joe Shepard, the president of WNMU. “The Milners stepped up with leadership as well as funding to create this series. Far deeper is the impact that Edwina will have on future generations.”

On behalf of WNMU, the Blue Dome Gallery and the Bear Mountain Lodge in Silver City hosted an exhibition and sale of Milner’s art in July, with 100 percent of the proceeds benefiting the university’s permanent collection. Many works were created in recent years since Milner recovered from a detached retina and then developed macular degeneration.

“Hers is a true Cinderella story,” says Linda Brewer, the owner of Blue Dome Gallery and Bear Mountain Lodge and a supporter of WNMU. “She put aside her career to help others and then was able to return to her art in spite of what some would say was a disability.”

Brewer, an artist herself, is among the successful women artists that the Milners have collected. Others include artists Roxanne Swentzell from Santa Clara Pubelo and her daughter, Rose Simpson; as well as Janet Fish and Diane March, among many others.

WA&A: What was the first art piece you purchased, and why?

E.H.M.: We were living in Houston when my brother, who was living in London, discovered a London artist that he wanted to collect. Since the artist showed in a gallery in Houston, he asked me to check him out. When Charlie and I went to see this artist’s work, I liked him enough, but Charlie was distracted; he was looking at other art and came upon one piece he thought was remarkable. It was an assemblage of colored paper that depicted a large Bible story at 5 by 6 feet. The artist, Mary McCleary, only did two pieces a year. Charlie said, ‘We have to have this piece.’ I was shocked because we didn’t have much money at the time. During its lifetime, our piece has been loaned out to eight different museums before we had to limit it because of its delicate nature. McCleary’s work is in the collection of the Crystal Bridges Museum in Bentonville, Arkansas, and the Museum of Fine Arts in Houston, among other prestigious museums.

E.H.M.: No, there never was. Mainly because we didn’t buy ‘name’ artists. We knew the art industry well, and when we’d meet these young artists, we’d help them out. We helped support them until they could get into a gallery. Mind you, we bought their art after they were in galleries, too, as we became friends with many of them.

WA&A: Do you have a favorite piece?

E.H.M.: I have many favorite pieces. We have a work by Gugger Petter, a Danish artist who paints with rolls of newspaper. She did a portrait of President Obama that is more than 6 by 5 feet! We visited her studio in California and were totally awed at how she works. I think it was then that we discovered that our collection is about artists who don’t use ordinary materials. Another artist we have is Star York, a Santa Fe bronze artist. One time, she was coming up our long driveway carrying a bust that she was donating to a charity cause. Charlie rushed to help her, and when he took the bronze from her, it was so heavy he almost fell over. And there she was, slight in stature, carrying it like it was nothing out of the ordinary.

WA&A: Where do you see your collection 100 years from now?

E.H.M.: Before Charlie passed away in March of this year (by the way, we’d been married 68 years), we had decided we wanted our collection to go to Western New Mexico University for their permanent collection because it’s an institution that’s making a difference in women artists’ lives.

WA&A senior contributing editor Shari Morrison has been in the business of art as an administrator, publisher, curator, writer, and collector for more than 40 years.