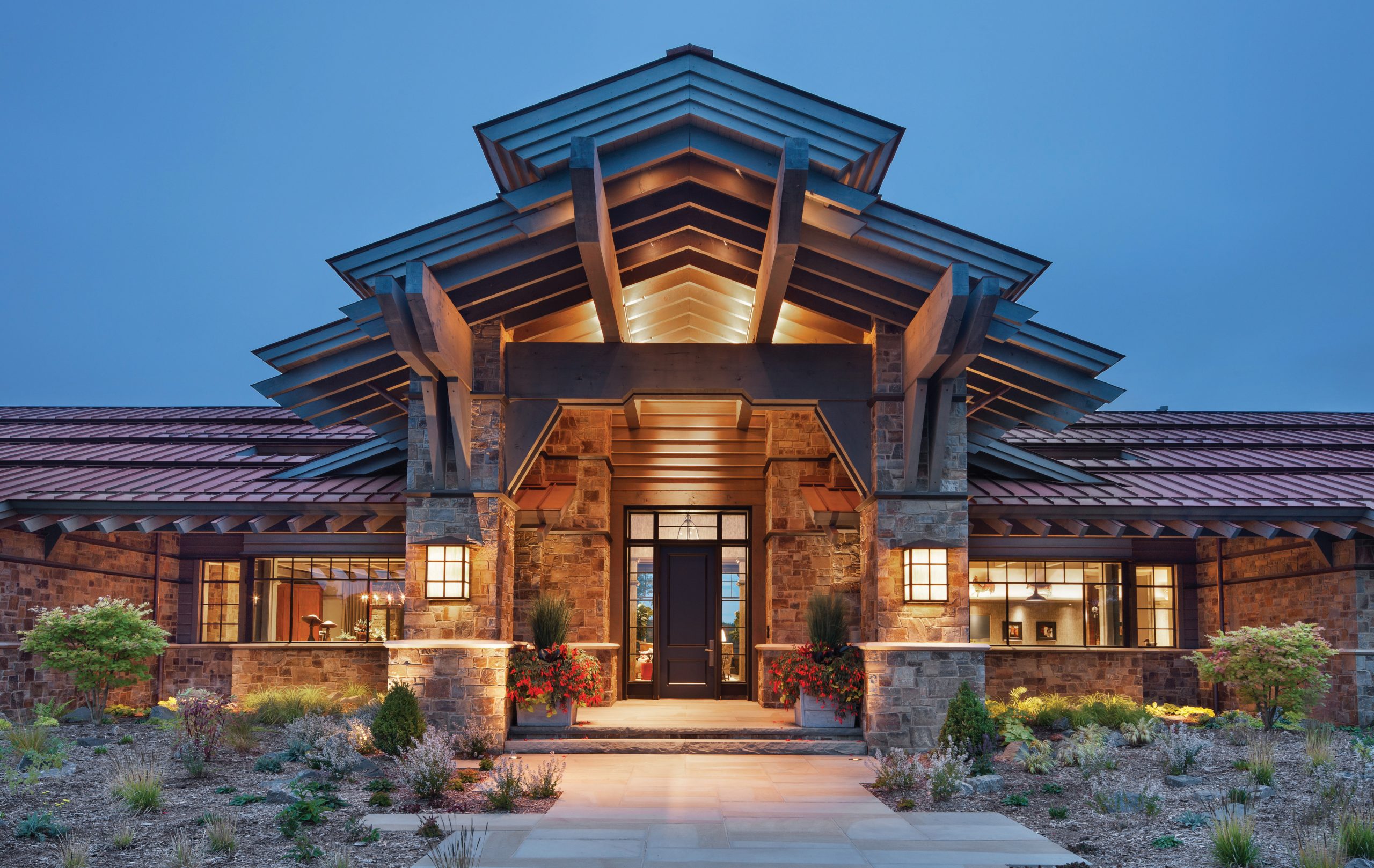 When a couple bought 100 acres north of Milwaukee, Wisconsin, in 1980, one thing was for sure: It wasn’t a home site for just anyone. Surrounded by idyllic small farms and orchards, this particular parcel had been owned by a business that abandoned it years before, leaving rusted farm equipment scattered about and barely a tree in sight. But this couple had a vision. Over time, they planted hundreds of trees and built a modest home overlooking a small lake.

Eventually, their son and his wife bought 25 acres of that property and built their own home, where they raised their three sons. “We enjoyed the ruralness of the land,” the daughter-in-law recalls. “It’s Wisconsin at its best: the nature, the woods, the water, and the wildlife.” 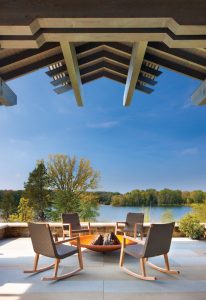 The terrace at the rear of the home looks out towards the water, and the rocking chairs around the fire pit are from Janus et Cie.

After her in-laws passed away, she and her husband tore down their original home and built a new one on the same site, which was the premier location to take in the views. In the process, the couple reached out to Ketchum, Idaho-based architect Jim McLaughlin after seeing other structures he had designed, including Blanket Bay fishing lodge in Queenstown, New Zealand. “They wanted a home that fit in with the land, took full advantage of the views, and had large outdoor living areas,” McLaughlin says. “But they also wanted private family areas so it felt homey.”

McLaughlin placed the master wing with an office on one end of the house and two guest suites with a shared living room and small kitchenette on the opposite end, creating a self-sufficient space for visiting friends and family. The central part of the home features a family room, a large country kitchen and breakfast area, an open dining room, a game room, and a great room with skylights to bring natural light into the interior areas. 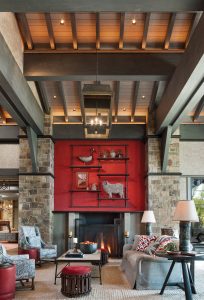 Instead of placing a painting above the fireplace in the home’s great room, interior designer Mary Beth Norton, of Norton Design Approach, opted for something different. “I found metal shelf framing [made by Dennis & Leen] that would highlight some key pieces,” she says. “It’s a wow-factor because it’s not expected.” The sofa is Rose Tarlow Melrose House with upholstery by Holland & Sherry; the ottomans are from Mike Bell; the end table and wing chairs are from Gregorius

The lofty coffered ceilings and exposed timbers throughout the home add a dramatic touch and help define spaces. “Jim works on a grand scale,” the wife says. “I never thought ceilings were important to a home on a decorative level, but these are really like art.”

McLaughlin added large overhangs on the exterior that are both decorative and functional. “On the front, they create a welcoming entry,” he says, “and they also create shade from the hot afternoon sun, especially on the large covered patio off the living room.”

The materials used both inside and out were chosen to blend into the prairie landscape. “They’d seen a number of our homes that used natural materials, like timber and native stone,” McLaughlin says. “They liked how it played into the architecture and the texture and colors of the house. The idea was to settle it into the site like it had been there forever.” 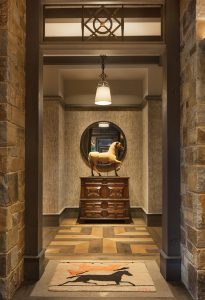 Norton was able to cleverly incorporate a collection of hooked rugs, such as the one placed in the gallery hallway, that were all handmade by the homeowner’s mother. The antique chest is from Daniel Stein Antiques, the ornamental horse is from Rose Tarlow Melrose House, the pendant light is from Objet Insolite, and the architectural metal transom was made by Scathain metal works.

On a trip to Montana, the homeowners discovered a Chief Cliff stone that they ended up using throughout the exterior in conjunction with a corten steel roof, which rusted over time and introduced subtle color while still complementing the stone and the surrounding landscape. The same stone was incorporated onto the interior columns that line the spine-like gallery hallway.

Marybeth Norton, owner of Norton Design Approach, an interior design firm based in Rancho Mirage, California, has worked with McLaughlin on a number of projects and was part of the design process from the very beginning. “Jim and I work in tandem, from the blueprint forward,” she says. “He starts the story, and I keep enforcing it. It’s all about architecture and place, respecting the landscape and the environment they’re going to reside in.” 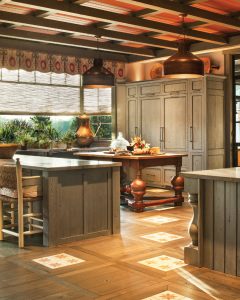 In the country-style kitchen, the cabinets were custom-made by Burmeister-Milwaukee; the island table is a custom design by Norton Design Approach and was fabricated by M Design Global; and the counter chairs are from Mulligan’s.

Norton’s main challenge was creating a sense of warmth within the large volumes. “Jim provides spaces that are grand in scale, materials, and interest, therefore the furnishings demanded the same focus, which I love,” she says. “This home promised to be of ‘record’ prominence, so each decision the owner and I approached kept this in perspective.”

Norton chose flooring materials that transitioned to define spaces and reflect a sense of place. “There are beautiful grey barns on other farms around their property, and I wanted to introduce that palette of color and texture into the materials,” she says. The distressed grey plank flooring combined with areas of inlaid stone reinforce and inspire the neutral colors throughout the interiors.

“The client and I were always making sure the décor was appropriate for the scale, but we wanted to be sure to introduce some whimsy to complement her Americana collections,” Norton says. “Comfort and a sense of casualness were very important for their family and friends. The fabrics had to be friendly and [interesting] to provide personality to each room. But again, the size and scope of the home also had to play to an ‘expected’ sophistication.” 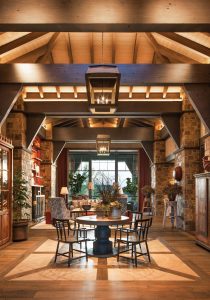 A casual seating and dining area sits just off the great room. The table was a custom design by Norton Design Approach, the chairs are from Sawkille, and the antique horse tack cabinet is from Old Plank antiques.

Instead of painting the walls, Norton used custom wallcoverings. “It’s all about layering,” she says. “The wallcoverings throughout the main areas displayed a vertical texture that held layers of grey-washed paint, and it introduced the needed warmth. It’s not wallpaper with exuberant patterns; it’s more of an architectural finish.”

As for the furnishings, Norton had everything custom made, from the fabrics to the area rugs. “Everything I do is custom,” she says. “I take clients on multiple shopping trips, and we might pick a showroom chair, but then it will get a special detail or finish. And if a piece wasn’t available, I designed one. We also collaborated with artistic local craftsmen who were amazing to work with.” 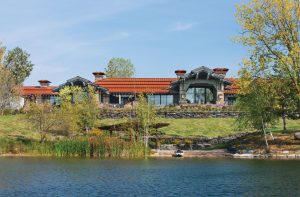 The homeowner worked closely with the Wisconsin-based landscape design company LandWorks, Inc. to choose every flower and plant. “After two years, it’s really filling in nicely,” the wife says.

Another touch that was especially meaningful to the owners was how Norton displayed sentimental memorabilia, including an antique weathervane collection that sits prominently along a high shelf running the length of the home. She also incorporated 25 folk-art-style hooked rugs that were handcrafted by the wife’s mother. “I didn’t have room in my previous home to display all of my mother’s hooked rugs, and now I enjoy them every day,” the wife says.

After raising their sons on this property — although in a much smaller home — and now with four grandchildren, the couple feels that their new residence still reflects all that they love about their surroundings. “Originally, I wanted to build an old barn with stone on the bottom, and Jim thought he could make something so much better,” the wife says. “And he did. It’s a new home and a newer look, but it still incorporates the Wisconsin landscape.”