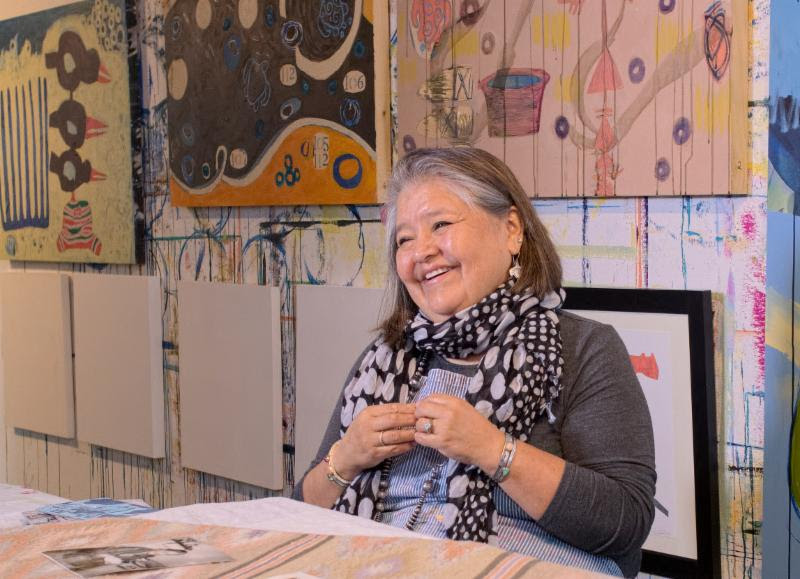 Spanning multiple galleries at the Wheelwright Museum, Memory Weaving: Works by Melanie Yazzie will run from May 13 through October 7, 2018.

Melanie Yazzie is an artist and educator whose work has been included in many solo and international group exhibitions. Her work appears in museums from Washington, D.C., to Australia. She has taught at the Institute of American Indian Arts and the University of Arizona, Tucson, and is now the head of the printmaking department at the University of Colorado, Boulder. A significant part of her practice involves safe printmaking, using less toxic materials and processes.

The title of the exhibit refers to a conversation the artist had with one of her grandmothers, a weaver, who said she was weaving with memories in her work. The exhibition will feature over 60 works, predominantly monotypes, but also prints incorporating drawn and painted elements. Additional works will include a selection of bronze sculptures in the Klah gallery, whimsically depicting animals such as dogs. There will be a selection of acrylic paintings on canvas, as well as a selection of linoleum blocks, wood blocks, tools and other materials intended to illuminate the artist’s practice. A video featuring the artist will be on view in the Slater gallery, created especially for the exhibition by Wheelwright Museum intern Faith Toledo, with the support of her mentor James Hunyadi.

As a child, Yazzie was instructed by her grandmother that traditional Navajo sandpainting imagery was inappropriate for use in commercial or secular artwork. “And so from a very early age I had this idea that my artwork had to be created from a different place, and not what most people think a Navajo artist would make. I’m not afraid to draw something that looks childlike,” Melanie reveals. “It’s my own mark making. That’s what makes it unique. For me, it contains everything real.”

Her prints take their inspiration from animals, plants, maps and weaving designs and tools. A dragonfly with three sets of wings, signifying motion, appears in multiple pieces. A number of works include a Navajo woman in a voluminous skirt with her hair tied up, often in silhouette, representing Yazzie herself. Through the maps, she speaks about the land and its loss to indigenous people. It “reminds people that we were here before, this was part of our existence and part of who we are.” A group of large monotypes refers to places she has traveled. “Connections to many different people are held in those images,” says Yazzie.

A notable selection of works refers to Yazzie’s struggles with Type II diabetes. Numbers appear in the designs, referring to her daily blood sugar counts, because “there’s a whole conversation in the numbers that I feel is really important, and when I travel to different places it seems to be a common illness within the indigenous community and also in the wider community. It helps me connect with people.”